Don’t let anyone tell you the Dulux Study Tour is a holiday – it’s an intense Amazing Race experience. Think of it as akin to experiencing the National Architecture Conference (the intense discussion, pondering and, of course, socialising) in three cities over 13 consecutive days, with jetlag to boot! Feeling tired and excited at the same time? You bet!

The final site visit of the tour in Paris was to the Fondation Jérôme Seydoux-Pathé by Renzo Piano Building Workshop (RPBW). Unexpectedly (after being unimpressed by other contemporary Parisian architecture), this building was a complete delight to experience – one of the most beautiful buildings I have ever visited. On first impressions, it appears as a giant Ghost Busters goo blob. But, it’s definitely not just about form. It’s a rational blob that knows its place perfectly.

Our tour guide for the visit was Thorsten Sahlmann, an associate at RPBW. Thorsten has been working with Renzo for the past 14 years. This building was his baby – a project that started in 2006 and took only one year to design in a very close dialogue with the client, but another seven years to be completed. The Fondation Jérôme Seydoux-Pathé is an organisation setup to preserve the history of cinema and house an archive for the Pathé company. Founded and originally run by the Pathé Brothers in 1896, it later became the world’s largest film equipment and production company. The new headquarters sits among typical Parisian apartment blocks in the thirteenth arrondissement, on the site of a mid-19th century theatre that was turned into a movie theatre in the mid-1960s and later fell into disrepair.

The facade to the street has been lovingly kept, with a covered outdoor transitional space between it and the new structure. This space is used as a meeting point for visitors and for ticket sales for the silent movie theatre in the basement, accessible by the public. Thorsten also explained how its rectangular shape (the only orthogonal part of the scheme) has ingeniously been used to house external fire stairs. Almost unnoticeable, covered by a theatre-like lighting rig, the stairs connect to each floor of the main structure via delicate steel gangways – a little bit like somewhere you would launch a spaceship.

The ground floor of the blob… I mean, main building… is the publicly accessible exhibition space. Glazing on three sides creates a strong visual connection from the entrance to a courtyard at the rear of the building. The blob above doesn’t feel like an ominous foreign object filling the voids between 19th-century buildings. You don’t even notice it’s there, with natural light beaming down to the small and large courtyard spaces that surround it.

Thorsten explained that the design never began life in its curved form. Key to the project was opening up the amount of natural light for the neighbours, who for so long had windows overlooking six storey party walls of the former structure. Initial schemes focused on more regular shapes with wedges removed to increase the light and ventilation for neighbours. After a couple of site visits they soon realized this wasn’t going to work. Through a series of studies connecting the small areas of party wall that had to remain, with a series of vertical and horizontal curves to open spaces for light, courtyards, and the program vertically, the bulbous shape of the building began to emerge as the rational solution.

The new issue of overlooking from neighbours, as well as the shape of the building, was dealt with using a perforated aluminum screen that covers the whole of the building. It hides the transition from the building’s upper glazed levels to mid, solid concrete levels that house three floors of archives. The transparency of the screen changes depending on orientation (30% transparency to south and 50% to north). Thorsten described the fine balance of light penetration between summer and winter months, while also maintaining privacy for neighbours.

The most beautiful space of the building is reserved primarily for the staff of the Foundation: researchers. Arching over the top of the two uppermost floors are curved timber ribs spanning from floor-to-floor, like the upturned belly of an old timber boat. On top of the ribs sits a fine steel structure that supports the edges of glazing (as well as the aluminum screen) that also spans the entire space. It conjures the feeling of climbing a mountain and being able to see for 360 degrees. On this occasion, the view is of the rooftops of the surrounding Parisian apartments.

Thorsten explained that the client requested the transparent office space as the heart of the Foundation from the beginning. They had seen and fallen in love with RPBW’s Italian office and understood a space like this would have to be managed manually during the peaks and troughs of climatic extremes during the year.

Manually adjustable openings in the top of the skylight can be opened in the height of summer. A plenum collects cool air that settles in the depth of the courtyard, which is pumped through the building. This limits airconditioning to only the peaks of winter or summer. And, like our own clients at James Russell Architect, the client was happy to wear a coat, put on sunglass or move the angle of their computer screen during the odd hour of the day during the height of winter or summer where the perforated screen couldn’t quite cope.

We also visited one of Renzo Piano’s first projects, The Pompidou Centre that he designed with Richard Rogers. You can clearly see how this influenced later projects. He saw the value in creating buildings that let you see and appreciate how they were constructed. Like our own work at James Russell Architect, structure is on show and isn’t hidden. The building is broken down into identifiable and relatable segments. Thorsten mentioned that in France, the architect typically just does concept drawings and hands it over to the engineer to work out the hard stuff. On this build they had to convince the contractors they knew what they were doing and through the back and forth, simplified the structure and screen detail to make it affordable.

It’s not until you look through the drawings that you realize how big this building is. Perhaps it is a combination of the public ground floor, the openness of the top two glazed levels, and the curves of the blob that hides its scale and thus makes a building that is truly comfortable in its space and with its neighbours. 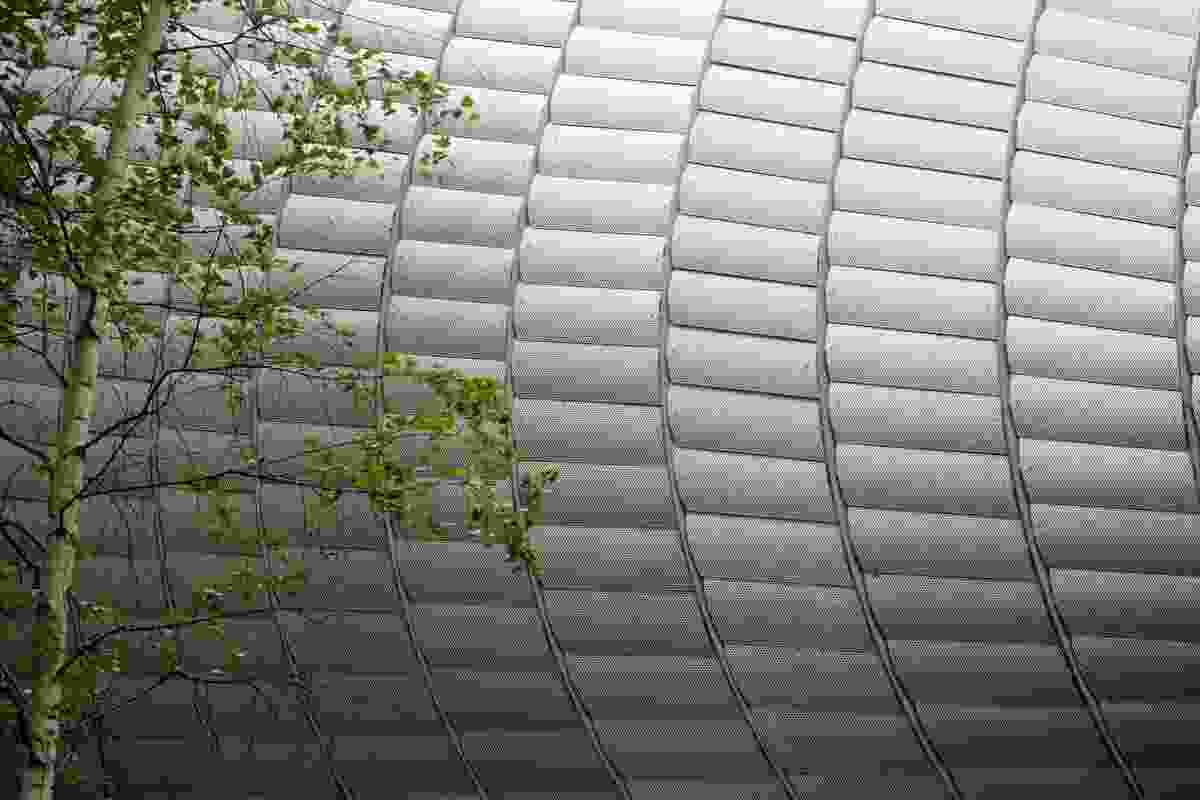 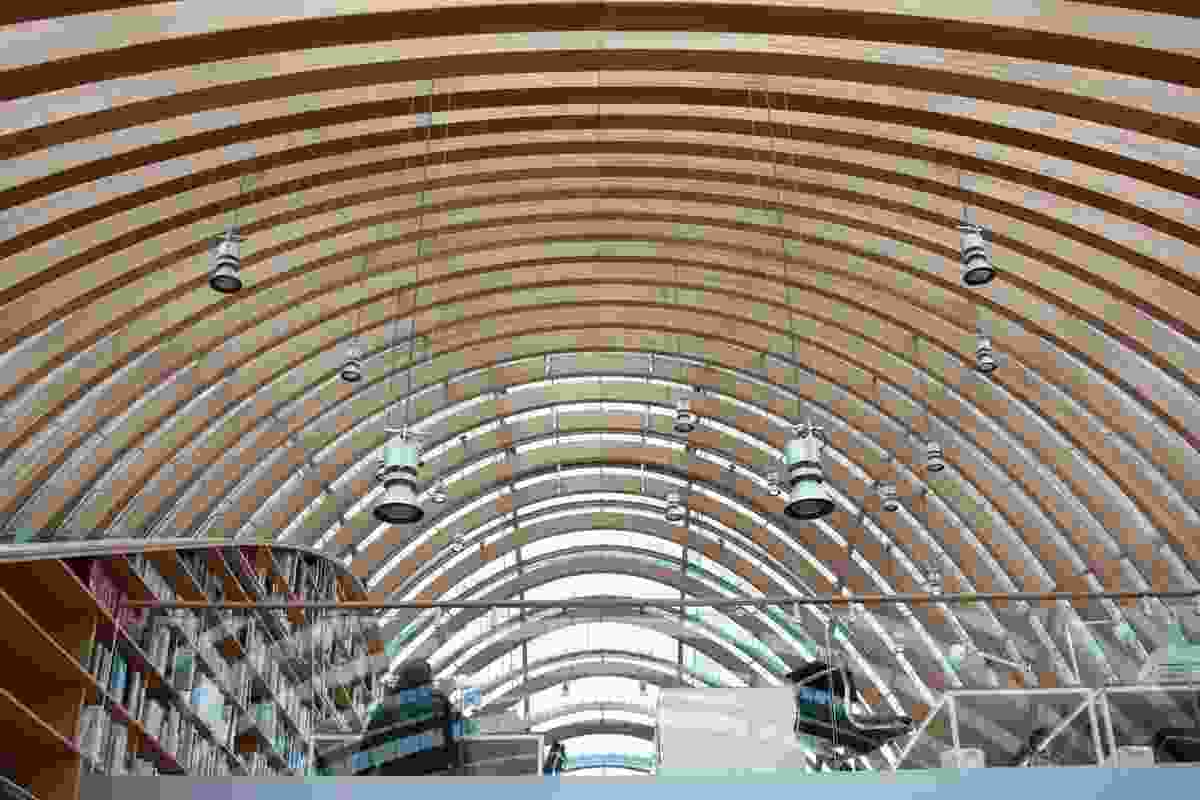 The interior of the Pathé Foundation by Renzo Piano Building Workshop is flooded with light. 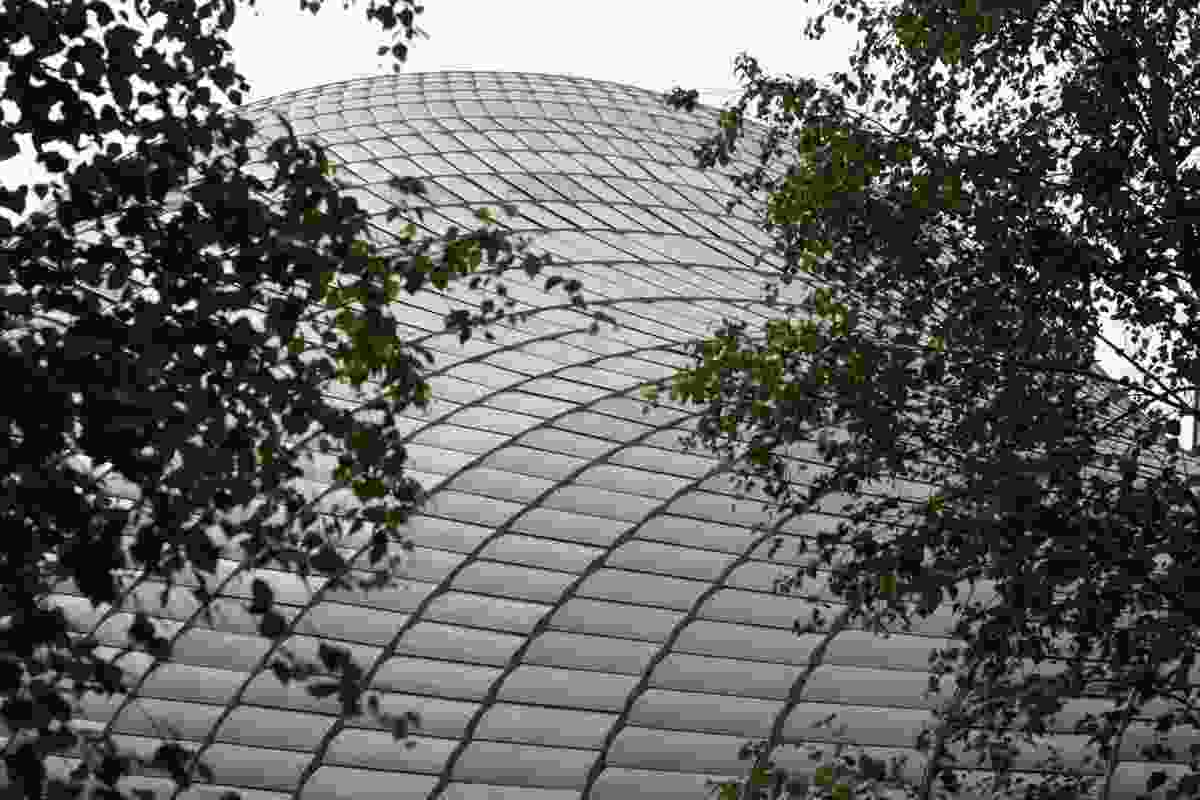 The Pathé Foundation’s bulbous shape emerged as the rational solution to the need for light, courtyards, and a vertical program. 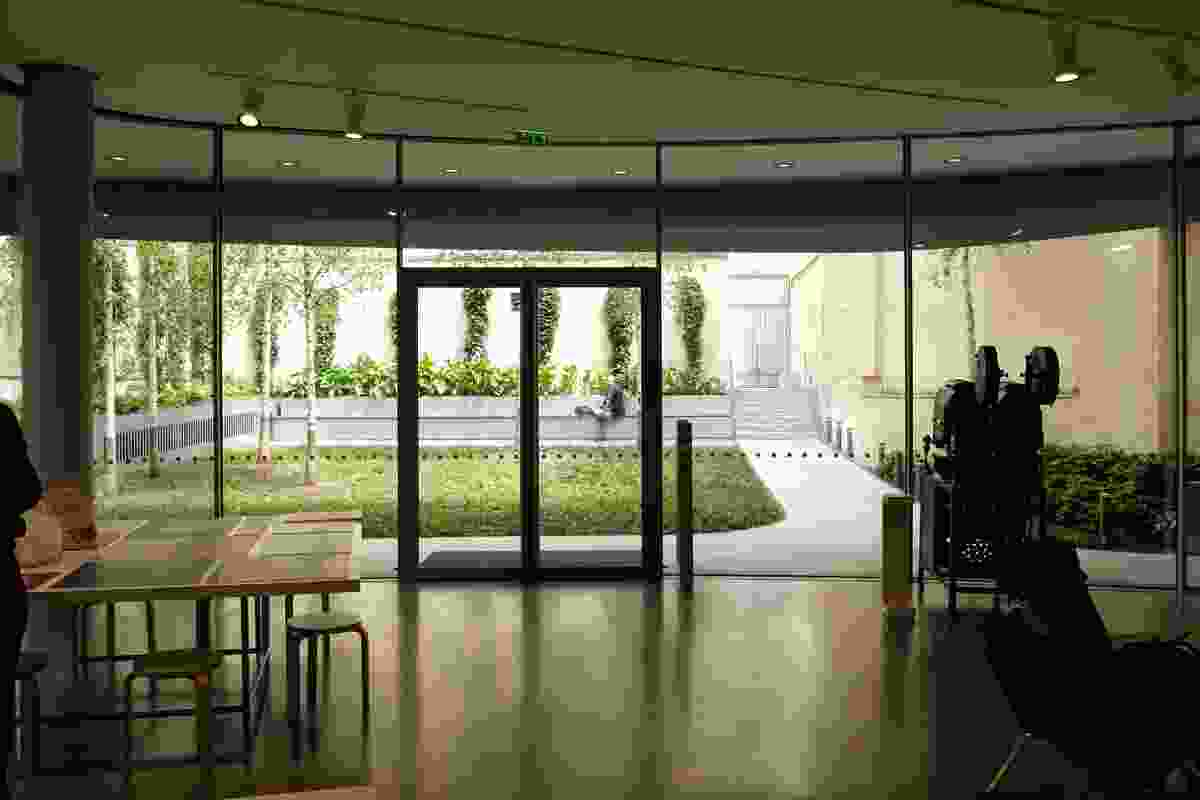 Natural light beams down to the small and large courtyard spaces that surround the Pathé Foundation by Renzo Piano Building Workshop. 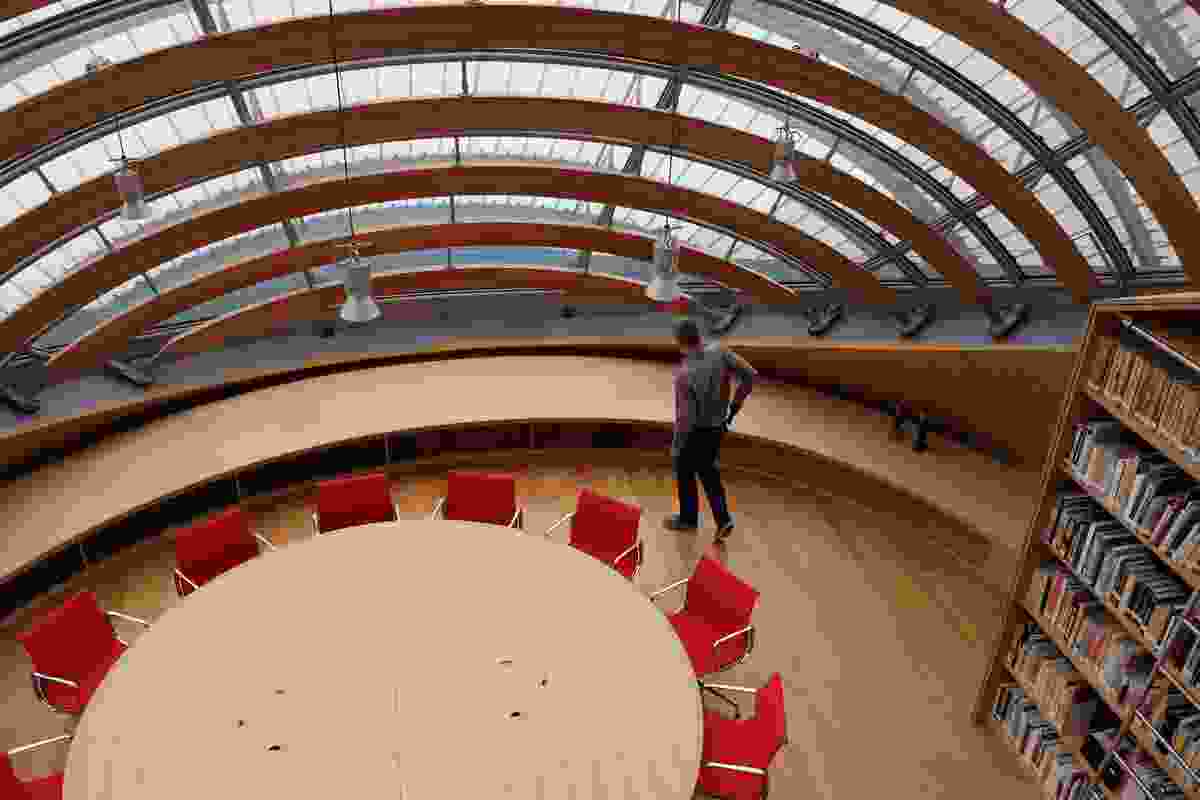 The upper level’s of the Pathé Foundation, it’s most beautiful spaces, are reserved primarily for its researchers. 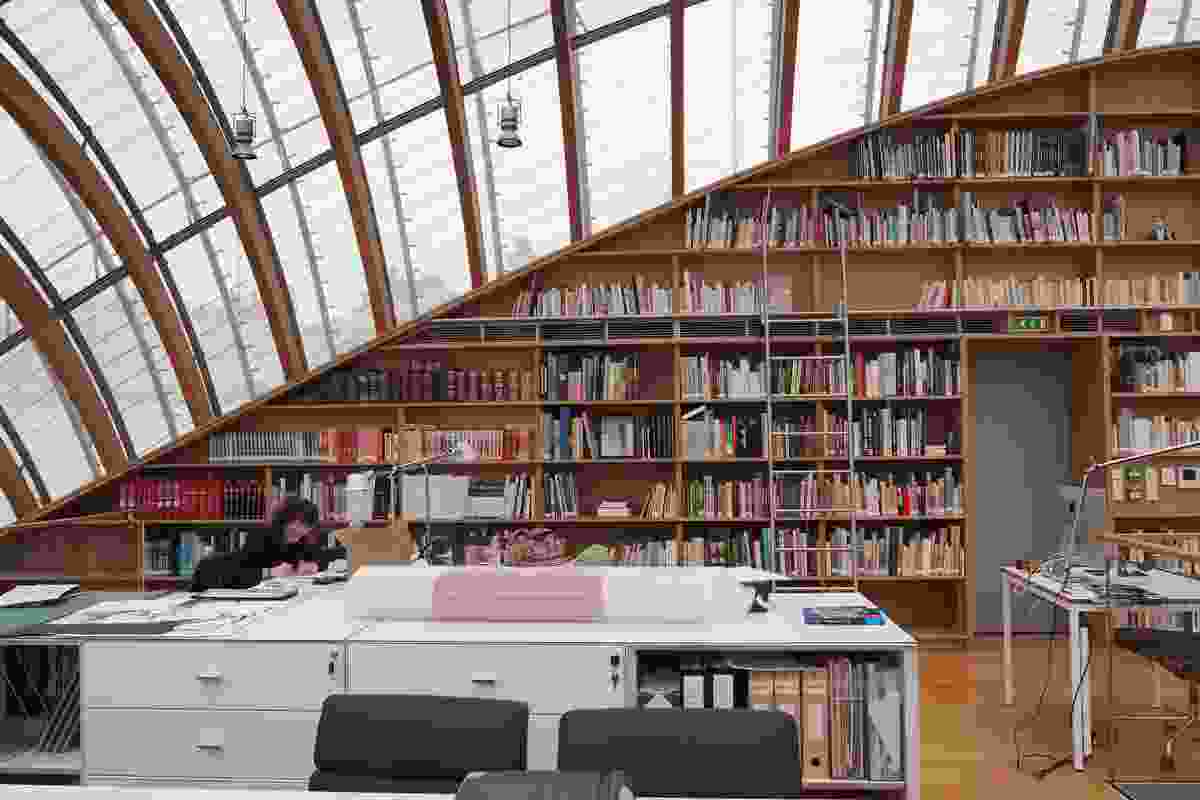 The main research space of the Pathé Foundation by Renzo Piano Building Workshop sits at the top of the building. 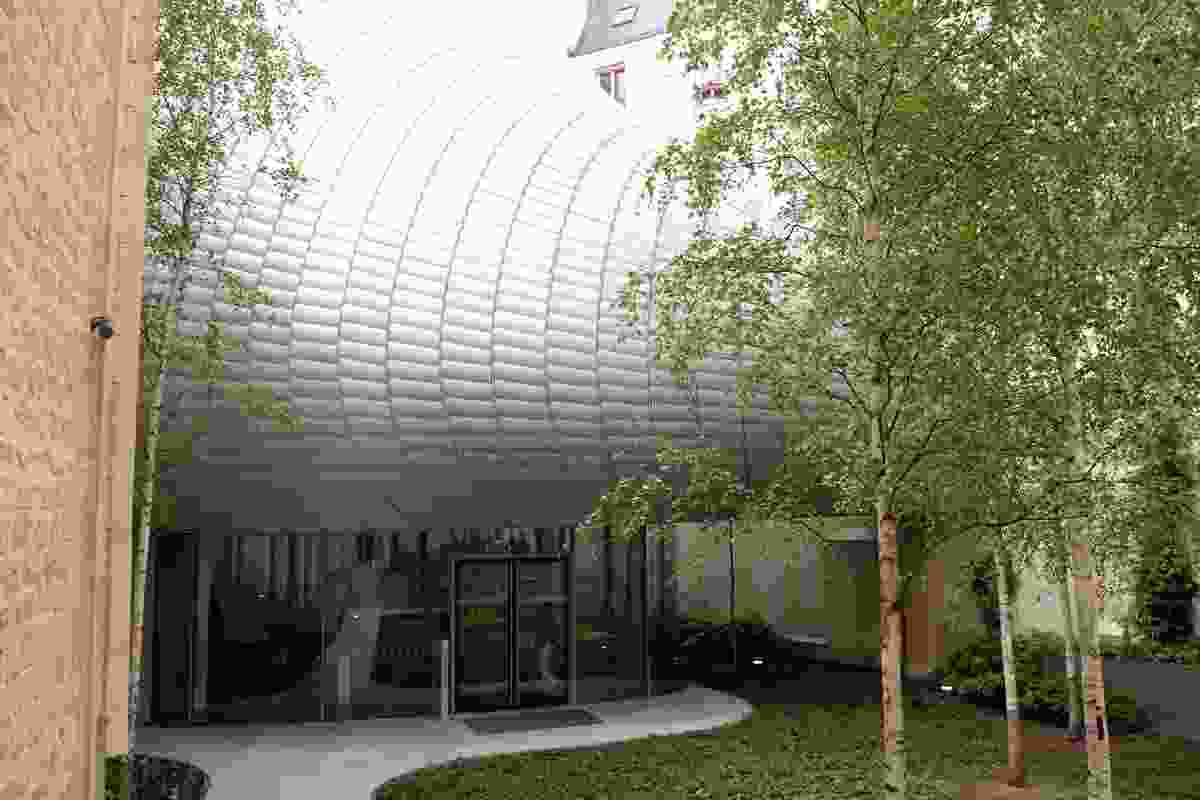 The curves of the Pathé Foundation hide its scale.