The 2015 MPavilion by Amanda Levete Architects – the second instalment of this annual architecture commission –presents a fittingly open platform for a diverse list of cultural programs.

The 2015 MPavilion commission by Amanda Levete Architects considered the pavilion itself and the context of its surroundings in equal measure.

Established by the Naomi Milgrom Foundation, the 2015 MPavilion is the second of four annual pavilions commissioned with support from City of Melbourne and the Victorian Government. Designed by UK-based firm AL_A (Amanda Levete Architects), the pavilion follows Sean Godsell’s contentious 2014 proposition, now relocated to a permanent home at the Hellenic Museum in Melbourne. Located in the Queen Victoria Gardens, opposite the Arts Centre on St Kilda Road, MPavilion is an optimistic concept that presents a diverse list of cultural programs to highlight Melbourne’s commitment to architecture and the arts via an innovative form of urban occupation.

In its parkland atmosphere, the 2015 pavilion grapples with how the small scale might compete with or complement the gardens en masse. AL_A’s primary response was to give presence to both the landscape and the architecture, the cultivated context considered just as significant as the pavilion itself. This figuring and refiguring of the garden alongside the architecture became a critical negotiation throughout the design process. A simple metaphor emerged that would shape the design intent: a figurative tree canopy forming a natural place to shelter under – and meet beneath – that would allow the conjoining of people, events and urban life. Under and around this canopy, a permeable pavilion would invite engagement with an array of daily, programmed events.

The pavilion’s main gesture is conveyed in thirteen large and thirty small three-millimetre-thick translucent “petals.” Hovering at three and four metres high, the petals are designed to mimic the dappled sunlight and shifting shadow found in the shade of a tree. The lofty canopy dematerializes in the garden setting, giving the pavilion an easy lightness and at times a certain camouflage.

The material configurations are evidence of a lengthy research phase and this is where AL_A thrives. Pushing materials and fabrication techniques into uncharted arenas is AL_A’s “happy place.” In this project, threads of carbon are meticulously interlocked to form a composite material, giving each petal its structural strength. Lines of carbon are expressed in each lucid component, producing a delightful, finely lined canopy. The flow of surrounding lush grass contrasts with the modular timber deck into which ninety-five carbon fibre rods are positioned. These rods are internally amplified to capture the sounds of the lightly swaying structure. As the breeze moves between the sheltering petals, an ambient echo adds a secret layer to the space. At dusk, embedded LED lights sync with a pre-programmed sound installation and the pavilion shimmies into the evening.

The MPavilion, like so much of AL_A’s work, continues the practice-based research undertaken when Amanda Levete was co-director of her former practice Future Systems with Jan Kaplický. Levete relishes the material research required by each project and the way each exploration opens up new modes of investigation that can be used for subsequent commissions. AL_A’s material obsession was matched by Queensland-based company MouldCam, a skilled manufacturer of composite structures and complex 3D shapes. MouldCam embraced the trials, errors and many abandoned processes that were necessary to perfect the pavilion. The carbon fibre layers proved tricky. Finding the balance between strength and translucency was complex and, even when the details of the process were resolved, it required MouldCam to work in continuous twenty-four-hour shifts until the components were complete.

With Levete in attendance, the opening of the 2015 MPavilion on 5 October 2015 featured a performance titled Womin Jeka Yalukit Willam – Elements 2 in the ancient language of the Boon Wurrung people (Yalukit Willam is the name of a Boon Wurrung clan) . Shortly after, Levete returned to the UK to watch from afar as MPavilion facilitated over 300 free events with 200 designers, artists, students, universities and cultural institutions involved.

When opened to the public, MPavilion became the setting for a continually evolving program, including morning meditation and music workshops, and for unplanned encounters. A high point was the visit of celebrated British artists Gilbert & George for beer and lamingtons. Tai Snaith’s delightful reading of her book Sticks and Stones: Animal Homes fulfilled one of Levete’s suggestions that story time for children would be suited to the pavilion. Equally, the exhibition Wearing the City from Monash Art Design and Architecture celebrated the translation of notable Melbourne interiors into wearable forms. An urban dog meet with dog walking company Tom and Captain saw MPavilion act as a springboard for four-legged furries and their parents to radically occupy Melbourne. Liquid Architecture presented Johannes S. Sistermanns’s Liftoffwehaveliftoff installation, reflecting on cities’ movements both figuratively and acoustically. Sistermanns suggested that the installation’s proximity to MPavilion revealed its finer dimensions. Like so many, Sistermanns thrilled in the intense visual and aural permeability of MPavilion within the surrounding urban environment and in the way it allowed interaction and activation with architecture and the arts in Melbourne.

The 2016 MPavilion by AL_A (Amanda Levete Architects) was installed in the Queen Victoria Gardens from 5 October 2015 to 7 February 2016. It has now been permanently relocated to a park in Melbourne’s Docklands. 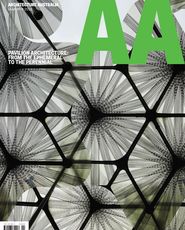 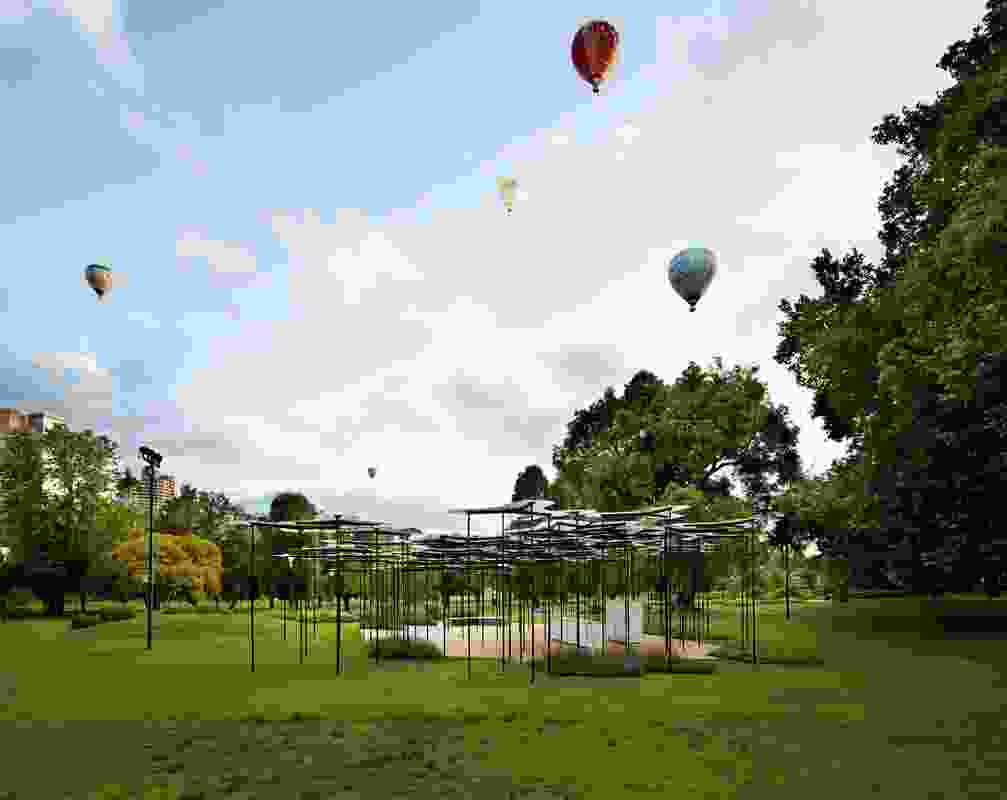 The 2015 MPavilion commission by Amanda Levete Architects considered the pavilion itself and the context of its surroundings in equal measure. 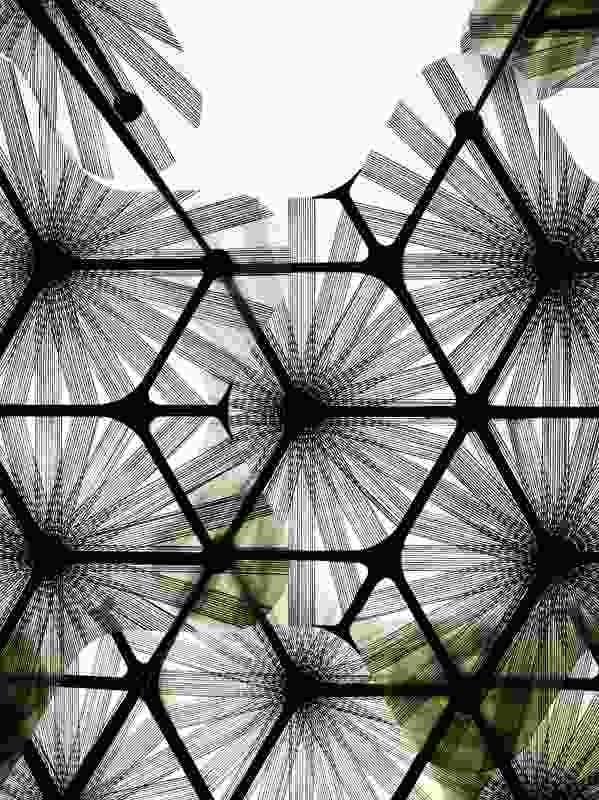 Threads of carbon fibre are meticulously interlayered in a composite material, giving each “petal” its structural strength. 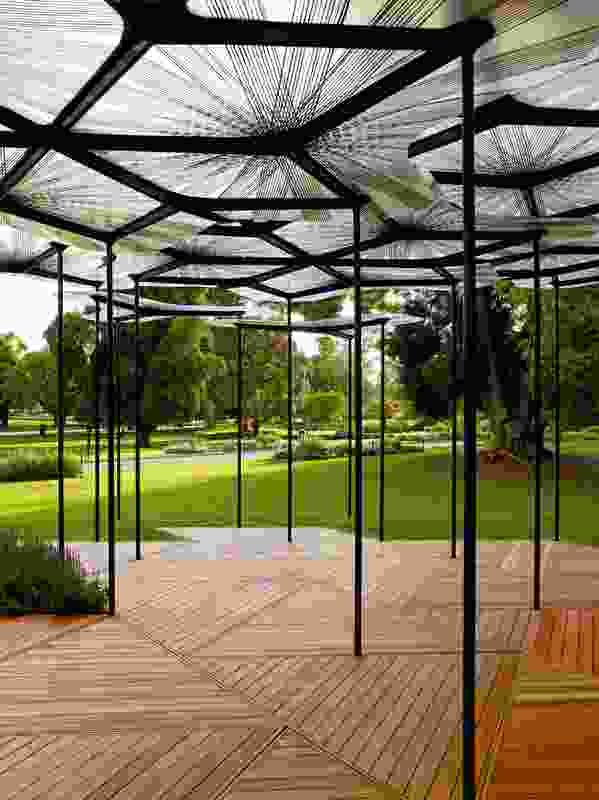 The architecture of the pavilion is conceived as a figurative tree canopy, offering a natural place to shelter and congregate. 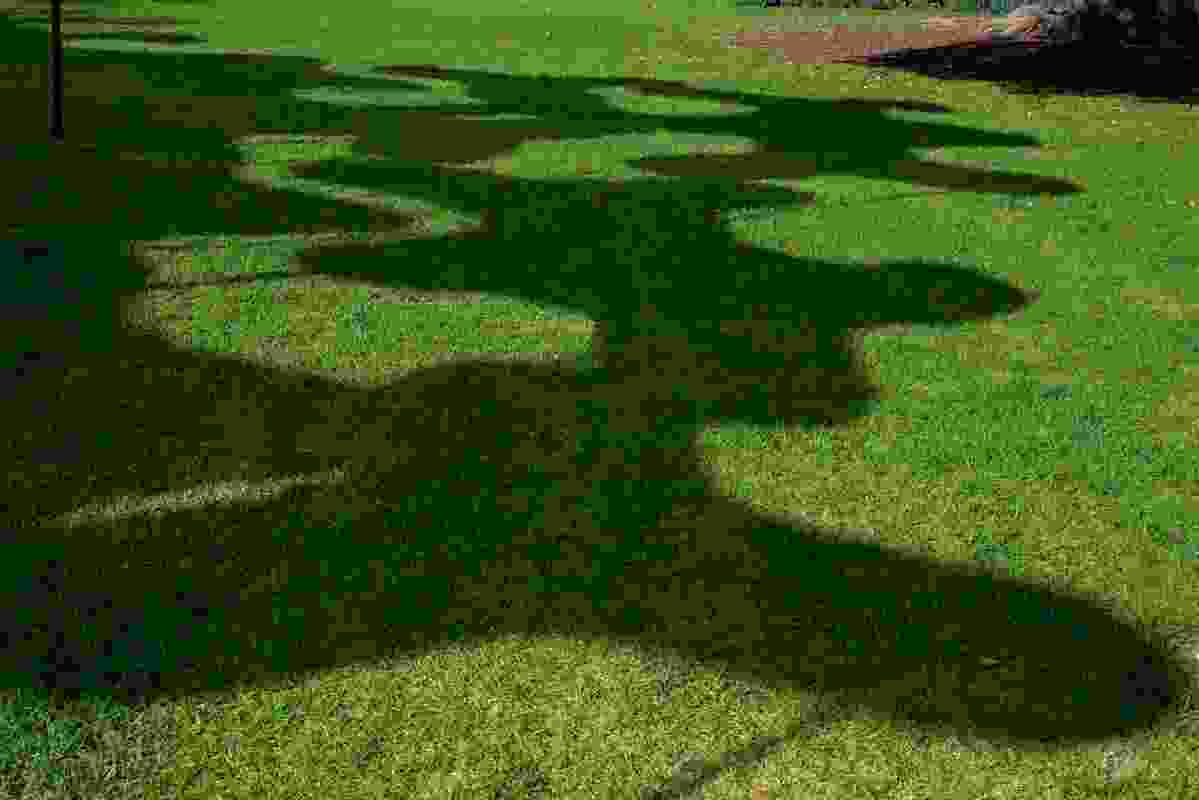 The pavilion’s semitransparent canopy enables a dynamic play of light throughout the day. 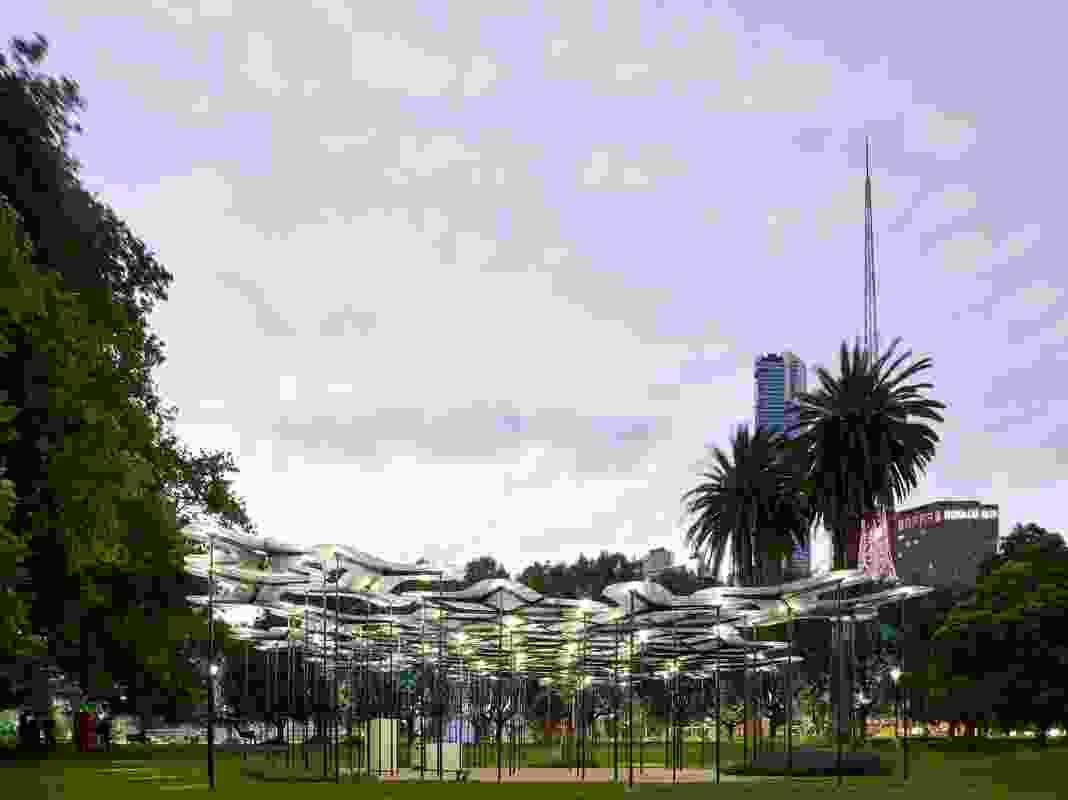