A masterplan for the proposed redevelopment of the Australian Memorial prepared by GHD Woodhead.

An august group of Australians, including a number of prominent architects, have signed an open letter penned in opposition to the planned redevelopment of the Australian War Memorial in Canberra.

The plan, which was funded to the tune of $498 million in the last federal budget, would see a number of existing buildings refurbished, while the existing Anzac Hall designed by Denton Corker Marshall would be demolished and replaced. The redevelopment would increase visitor areas by 83 percent, with the addition of around 10,000 square metres of exhibition and public program space.

The letter, coordinated by an advocacy group called Heritage Guardians, was co-signed by architects who have designed buildings at the memorial, including Australian Institute of Architects’ Gold Medallists John Denton of Denton Corker Marshall and Enrico Taglietti, who designed the Australian War Memorial Annex. Other architect signatories include Penleigh Boyd and Gold Medallist Peter McIntyre.

Other members of the 83-strong cohort include writers Richard Flanagan, Thomas Keneally, and Don Watson; Tilman Ruff, founding chair of the International Campaign to Abolish Nuclear Weapons (winner of the Nobel Peace Prize in 2017), and Gillian Triggs, former president of the Australian Human Rights Commission.

The signatories of the letter question whether the funds earmarked for the redevelopment could be better spent elsewhere, noting that $350 million had already been spent on the Sir John Monash Centre in Villers-Bretonneux in the north of France, designed by Cox Architecture in association with Williams, Abrahams and Lampros into mark the centenary of the end of World War I.

The full text of the letter reads:

The Australian War Memorial’s $498 million extensions should not proceed. They cannot be justified, they show the Memorial is being given preference over other national institutions, and the money could be better spent.

The Memorial Director, Dr Brendan Nelson, touts the Memorial as telling ‘our story’. The Memorial should be revered, but Australia has many stories and Dr Nelson’s excessive veneration of the Anzac story denies the richness of our history.

Dr Nelson wants added space to display more of the big artefacts representing recent, but purportedly ‘forgotten’ conflicts, and to ‘heal’ veterans. Recent conflicts should instead be presented in proportion to their significance; responsibility for veterans’ welfare belongs with Defence and Veterans’ Affairs.

The extensions offer Dr Nelson a permanent legacy like that of none of his predecessors. His and his Council’s ambitions will destroy the Memorial’s character and entail the demolition of Anzac Hall, opened in 2001 and winner of the 2005 Sir Zelman Cowen Award for Public Architecture.

The Memorial has been treated most generously by successive governments, and has suffered less from the ‘efficiency dividend’ that has damaged other institutions.

We have just seen over $350 million spent by the Commonwealth on the Anzac Centenary and the Sir John Monash Centre in France. Should further money be spent on these extensions rather than on other needy cultural institutions or direct benefits to veterans and their families?

The redevelopment plan has been highly contentious since it was announced last year.

Speaking to ArchitectureAU in November 2018, John Denton said that he was “massively disappointed” with the plan to demolish Anzac Hall, and alleged that the memorial “in its desire to ‘get the money,’ has failed to consider real options.”

“After all, this is first and foremost a solemn memorial, and only after that a war museum.” 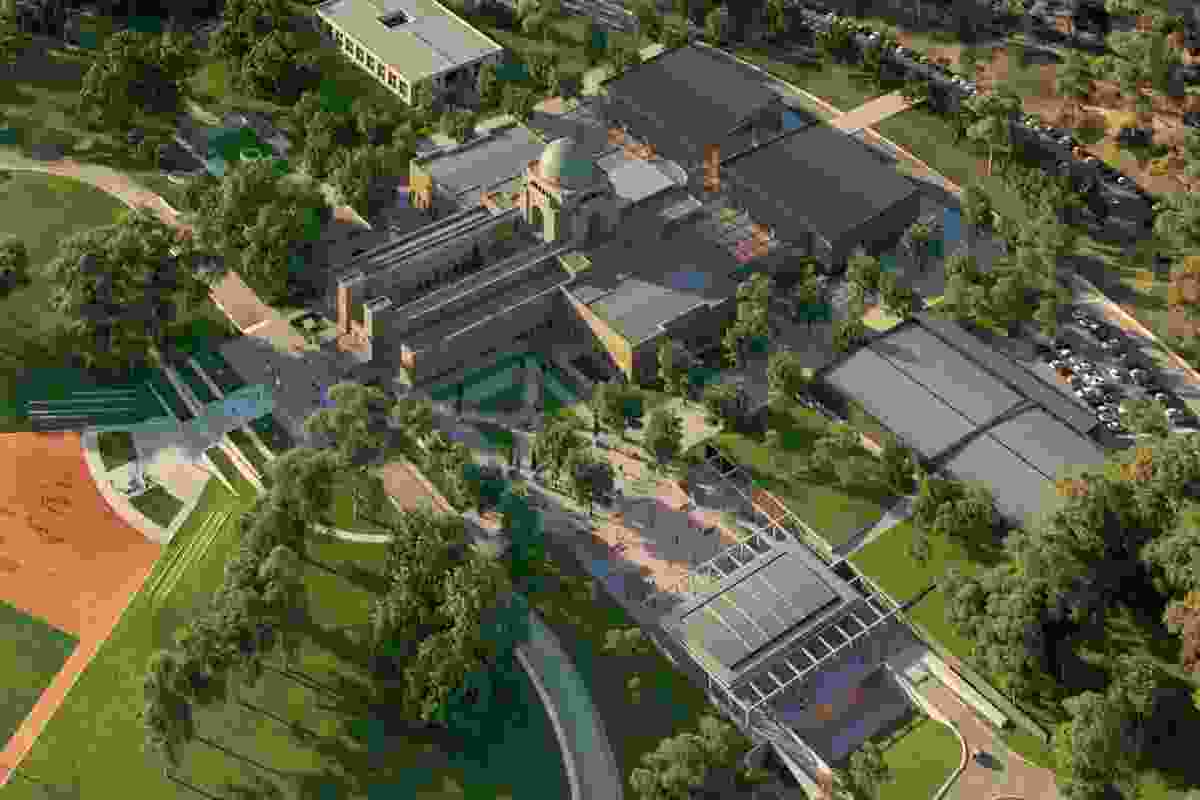 A masterplan for the proposed redevelopment of the Australian Memorial prepared by GHD Woodhead.