Set above the bends of the Brisbane River and informed by the material qualities of the existing 1930s cottage, a new brick and timber living wing, terraced garden and lap pool designed by Owen Architecture frame the terrain and capture the timeless spirit of this period home.

A long gable over the northern wing connects the new living spaces and directs sight lines toward the river.

Brisbane’s suburbs are as varied as its terrain. The meandering Brisbane River winds around seven hills, which have been progressively built-up since the beginnings of colonization in the 1820s. While the city developed around the Petrie Bight, South Brisbane and Town reaches of the river, a new rail line to Ipswich in the 1870s became the catalyst for expansion westwards. Wealthy citizens began purchasing large parcels of land for grand houses. Over time, larger estates were subdivided, and by the 1920s the suburb of Indooroopilly, just down the river from the Lone Pine Koala Sanctuary, had developed with private schools, theatres and golf clubs. The opening of the first stage of the Indooroopilly Shoppingtown in 1970 spurned on the growth of the city’s western hub.

Indooroopilly is more organically ordered than many of the city’s older suburbs. Within a landscape of native vegetation, the suburb is wound among a sequence of parks on remnant land that reveals the trace of historic waterways and floodplains. In contrast, parts of the western riverbank are well above the waterline, and these stretches have become high-value real estate, with a diverse array of houses, large and small. Along this upper bank, Owen Architecture has reconfigured an existing 1930s house that had been significantly altered in the 1980s through the addition of a new northern wing of modest living spaces and adjacent verandahs, and a bedroom and ensuite to the west.

A series of schemes was developed to test options for partial or total demolition, and to explore the scope of the brief with the client. Each option focused on ways to invert the relationship between building and site, to create a house that framed the garden rather than being consumed by it. Demolishing the 1980s addition and locating a new wing further north created a clear separation between old and new, reinstating the form and character of the 1930s house. Benching the sloping site into terraces allowed the new living spaces to open directly onto the lawn, providing a reconnection with the more grounded character of the original house. An arrival court to the west formed by a second wing, which garages the client’s collection of cars, fortifies the allotment from the neighbours. In contrast to two contained and manicured courtyards, a productive garden to be developed to the north, with vegetables, an olive grove and chickens, will merge with the native landscaping of the suburb beyond.

The materiality of the 1930s house informs the new buildings, with the original brick plinth establishing a datum for the ground plane of the eastern courtyard and the roof of the carport to the west. Brick walls fold around an existing tree on the southern boundary to form the entry courtyard. The brick fence extends up to form a tower-like structure that houses the new bedroom, expressing the entry from the driveway. Grass-block pavers in the entry courtyard transition into a brick floor in the carport undercroft that continues up the stairs and through the house. This brick path creates an edge to the living room, forming a threshold between the interior spaces and the garden, and folds up to form a chimney at the eastern end of the entry corridor.

The internal structure of the original house is retained, with two of the existing bedrooms kept for the same purpose and joined by an enclosed verandah and a third bedroom used as a study, bathroom and laundry. The original front room, which was buried within the 1980s extension, is reconnected with the garden by a new external wall of fixed glazing and floor-to ceiling solid casement windows. Four steps above the main living space, this room provides a link between the old and the new, both spatially and visually. A new bedroom, with an extensive dressing room, ensuite and study provides a sanctuary that is disconnected from the more public spaces of the house.

Brisbane Riverbank House demonstrates architect Paul Owen’s fascination with the Dutch architect and theorist John Habraken’s idea of trusting in ordinary things. This idea is expressed through the careful articulation of primary architectural elements – wall, floor and roof. Throughout the house, changing levels and floor textures provide a subtle delineation of spaces. Built-in benches and window seats form a series of edges and nooks within the open-planned space. Connections through and beyond the house are accentuated by the deep gable of the new northern wing, which provides a steeply pitched ceiling that also centres the sequence of spaces. The simple spatial rhythm is offset by subtle details articulated through stone and timber, light and shadow. By inverting the suburban house-with-a-verandah typology, Owen Architecture has created a house that is the verandah, dramatically reconfiguring the relationship between the interior spaces, the immediate landscape and the river beyond.

Brisbane Riverbank House is built on the land of the Turrbal people.

Other
Custom steel fences, hoods and roofs by Watkins Steel 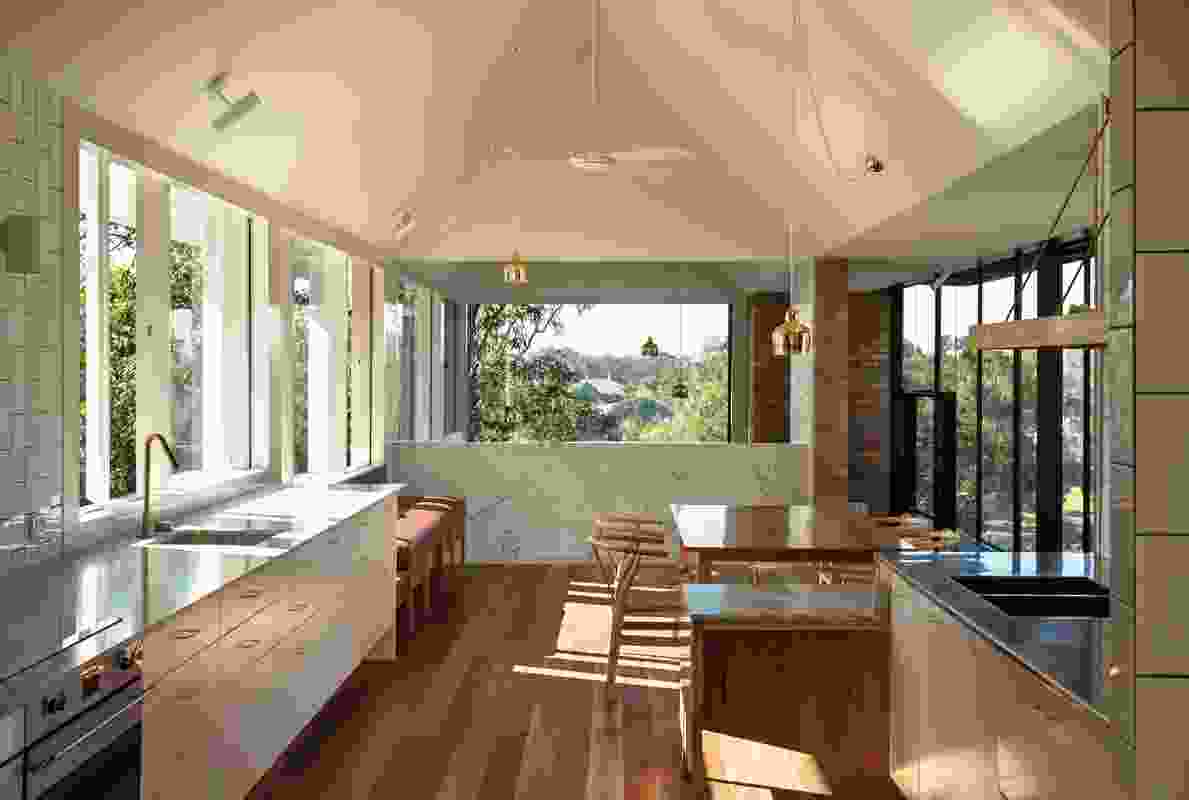 A long gable over the northern wing connects the new living spaces and directs sight lines toward the river. The sloping site is contained to form a level lawn, while terraced vegetable gardens connect to the wild vegetation of the riverbank. 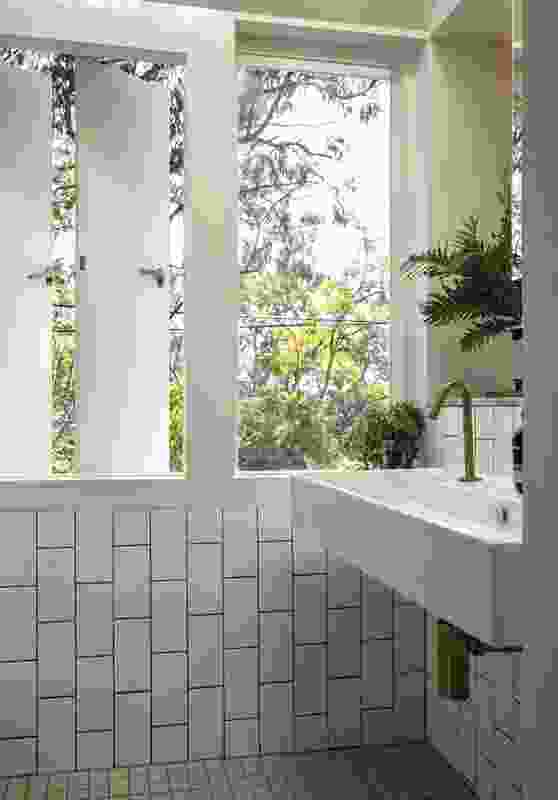 Solid casement windows provide the interior with a flexible balance of permeability and privacy. 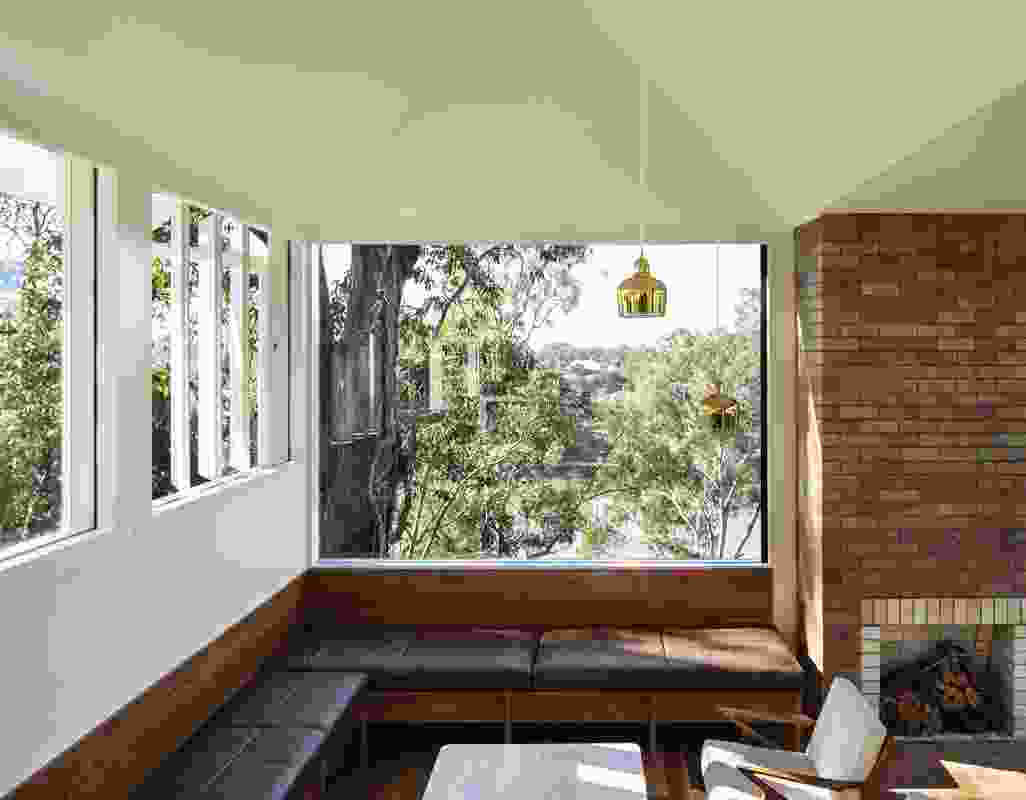 A brick path running the length of the living room forms a threshold between inside and out. 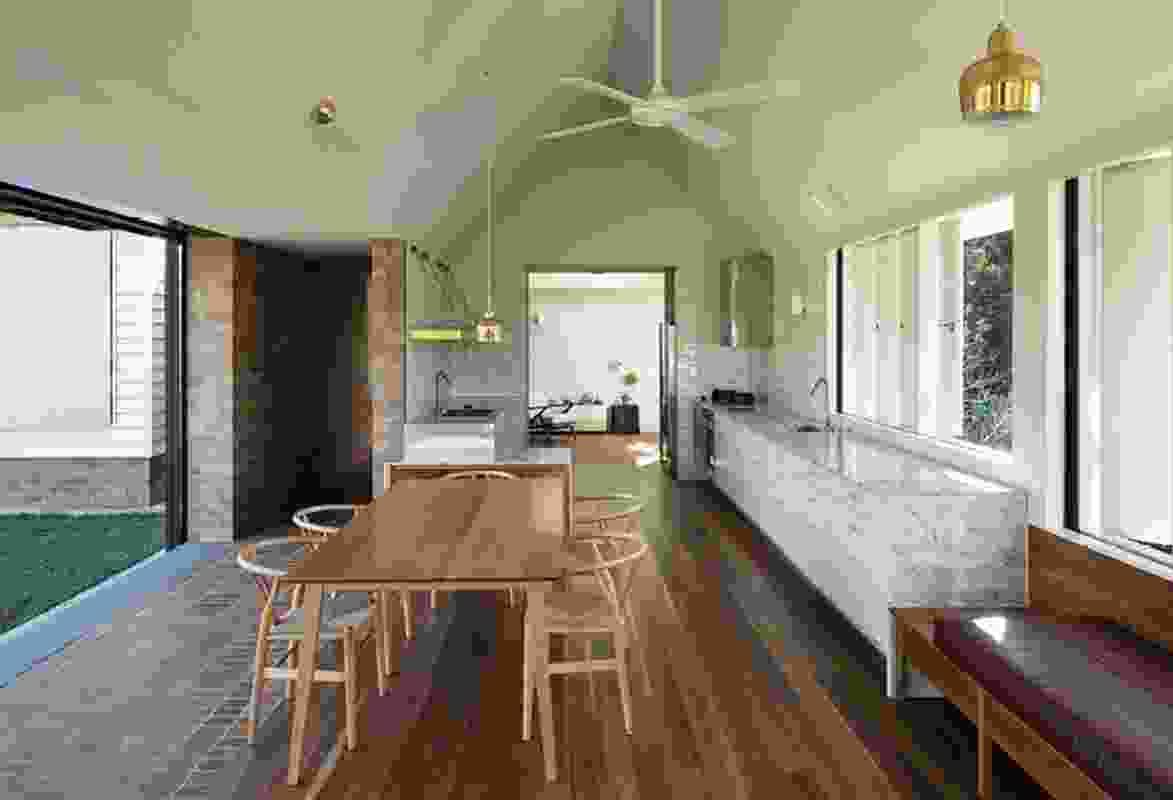 A sunroom at one end of the kitchen forms a pivot point between the new pavilion and the original cottage. 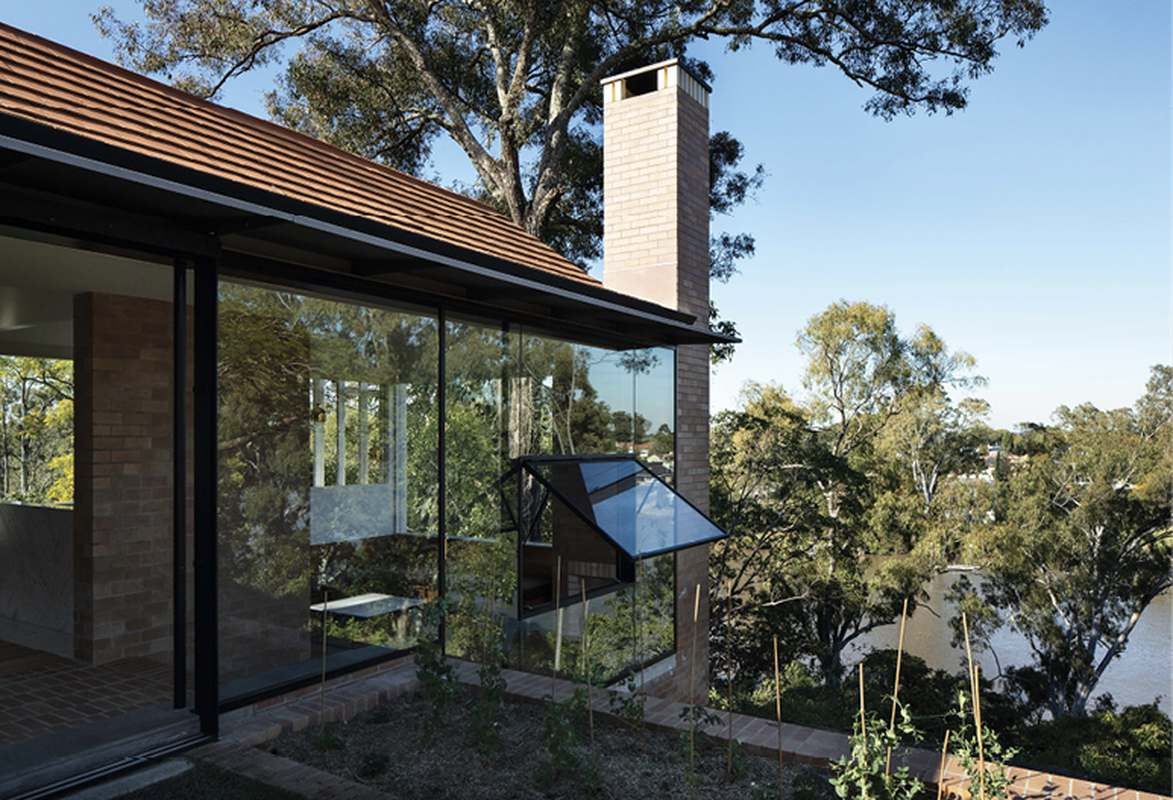 The brick plinth of the existing cottage establishes a material logic that extends throughout.