A modest extension for his in-laws provided Paul Porjazoski of Bent Architecture with a springboard from which to launch his practice. Over ten years later, Paul reflects on how the success of this project helped to convince potential clients that he has what it takes.

Pre-weathered copper cladding hovers above the ground and defines the extension as a “placed object.”

Like many young architects looking to set up shop in their own right, our venture into private practice began with a project for family.

The Bent Robe was commissioned by my in-laws in anticipation of their imminent retirement, their home set to play a more significant and concentrated role in their everyday lives. Our brief was to extend the existing house to provide a new main bedroom and ensuite that would engage with the home’s garden setting (the existing accommodation was modest in scale, introverted and uncomfortably dark), and to provide copious amounts of wardrobe space. My father-in-law, Colin, was Dean of International Studies at RMIT University at the time. He and his wife, Lorraine, would regularly travel to Hong Kong, returning with overflowing suitcases that would make the baggage handlers at Melbourne Airport shudder in their boots.

The existing house had a history of embracing change. It was originally built by Pettit and Sevitt in the early 1970s as a project home designed by Ken Woolley, and then renovated and extended by Maggie Edmond in the mid 1980s, with a new living space and kids’ bedrooms liberating the house in both plan and section. Conscious of the fact that we were modifying a now empty nest, we initially sought to accommodate this new phase within the existing footprint of the house. It soon became apparent, however, that the spatial potential of the project would be best realized by extending the new works beyond the confines of the existing structure, engaging with the garden both on and beyond the site. The robe, a typically functional and not altogether remarkable space, became the centre point of the scheme.

Initially conceived as an autonomous, freestanding object in the garden, the robe was positioned to the west of the existing house. Here it would define and protect the new main bedroom, which was an in-between, transparent space, connected to northern sunlight and the landscape of the site. The exposed framework of the existing house was stretched to envelop the bedroom, while full-height louvres at the northern and southern edges of the space were employed to harness the best of nature – northern sun and summer breezes. The robe is lightweight and maintenance-free. The pre-weathered copper cladding terminates just above the ground to reinforce the idea of the robe as a placed object. Robe and ensuite windows, all north-facing, are expressed as pop-outs searching for the sun.

The Bent Robe explores themes that continue to be fundamental to our work today: the integration of architecture and landscape, connection to northern sunlight, engagement with (rather than turning its back on) the spirit of an existing home and the creation of the poetic in even the most practical of functions. It explores the balance between protection and prospect in residential architecture, and the idea of the home as both a sanctuary to escape from, and a platform to engage with, one’s surrounds.

The project also provided a springboard for the development of our practice. I’ve often said that starting an architecture studio is pretty easy; enthusiasm, CAD software and a trip to Officeworks to buy stationery, and you’re off and running. But it’s staying in practice in the second and third years of the journey that’s the real challenge, as there is often a significant lull between completing the projects that you had when you launched into practice and picking up new work. We were in our mid-twenties when we started Bent Architecture, and convincing prospective clients that we had the skills and experience required to deliver their project was a challenge. We established our office on site so that we could immerse ourselves in the project and oversee construction (we subcontracted the project ourselves) and were incredibly fortunate that, soon after completion, Bent Robe was extensively published in popular and architectural media, both locally and internationally, giving us the credibility needed to take the next step. Receiving an Australian Institute of Architects state award for residential alterations and additions in 2005 helped our cause, as did an episode of Great Australian Homes , where we appeared with Maggie Edmond and Ken Woolley, each discussing the evolution of this humble house in Melbourne’s Doncaster.

I feel incredibly grateful for the opportunity that we were given with our first project, and immensely proud of what we were able to achieve. We now have the good fortune of being able to visit the house on a regular basis, and my in-laws still talk to me as well – I guess that’s a good thing? The only thing I would have done differently is being on site the day the plumber installed the showerhead so low that my father-in-law can’t actually stand under it … rookie mistake! 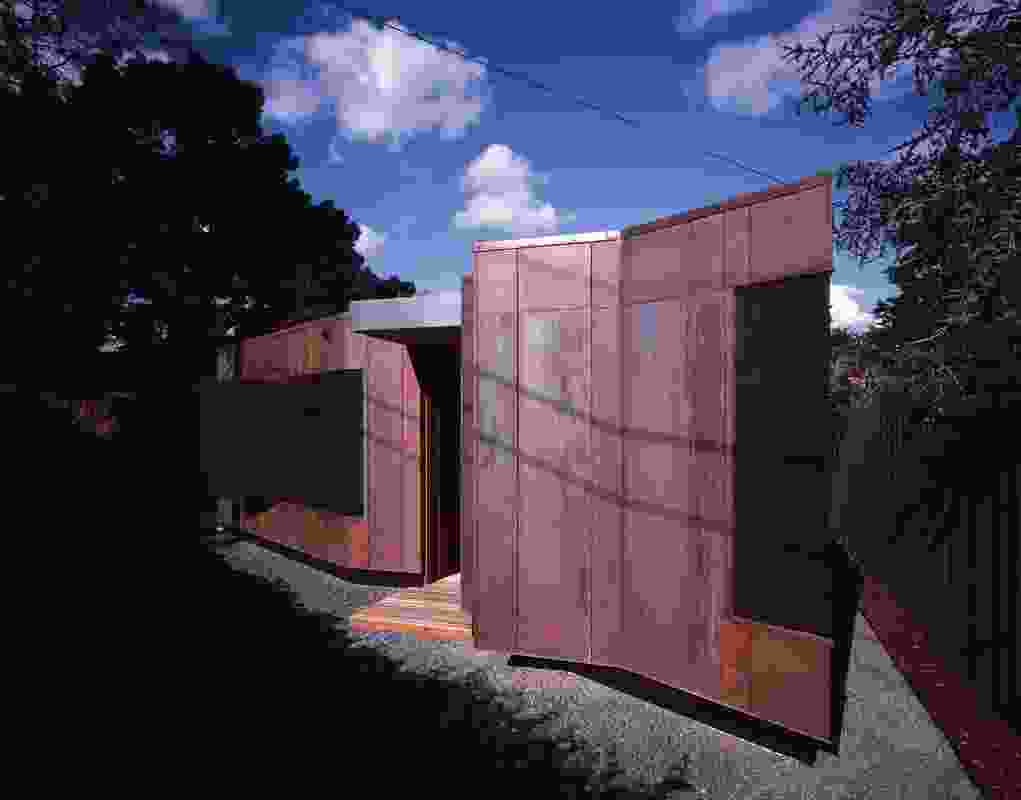 Pre-weathered copper cladding hovers above the ground and defines the extension as a “placed object.” 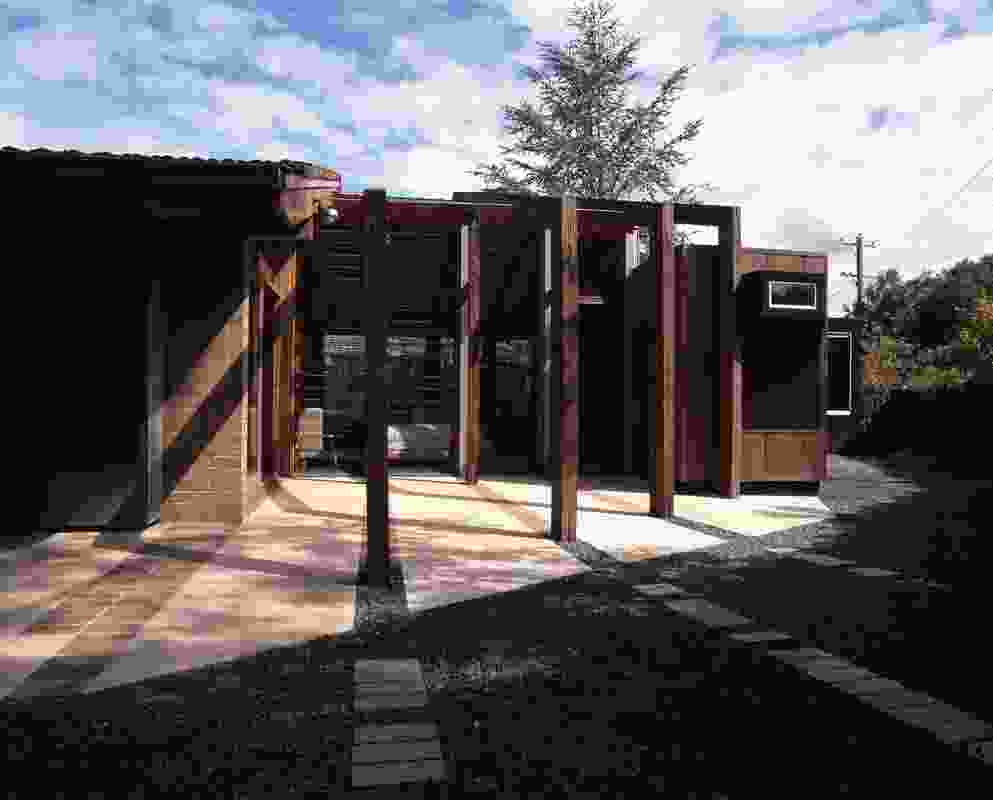 The exposed framework of the existing house was stretched to envelop the new bedroom, with full-height louvres on the northern and southern edges of the space. 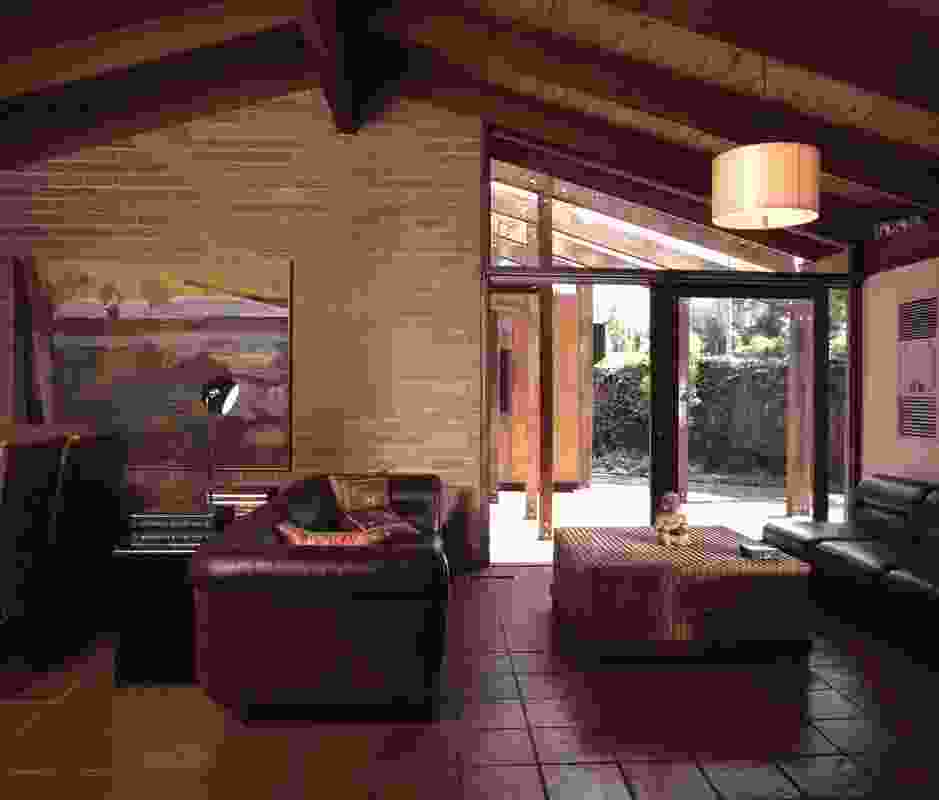 The original house was designed by Ken Woolley as a project home for Pettit and Sevitt in the 1970s, with updates by Maggie Edmond in the 1980s. Artwork: Artist unknown. 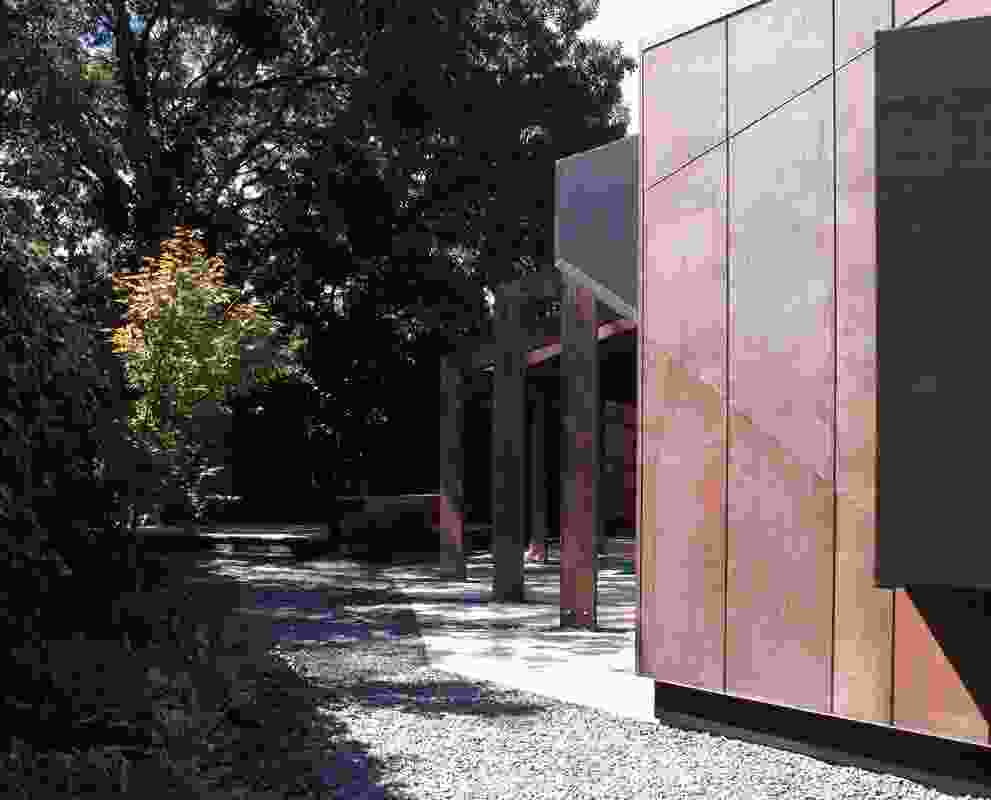 The existing house was extended to engage with the garden, both on and beyond the site. 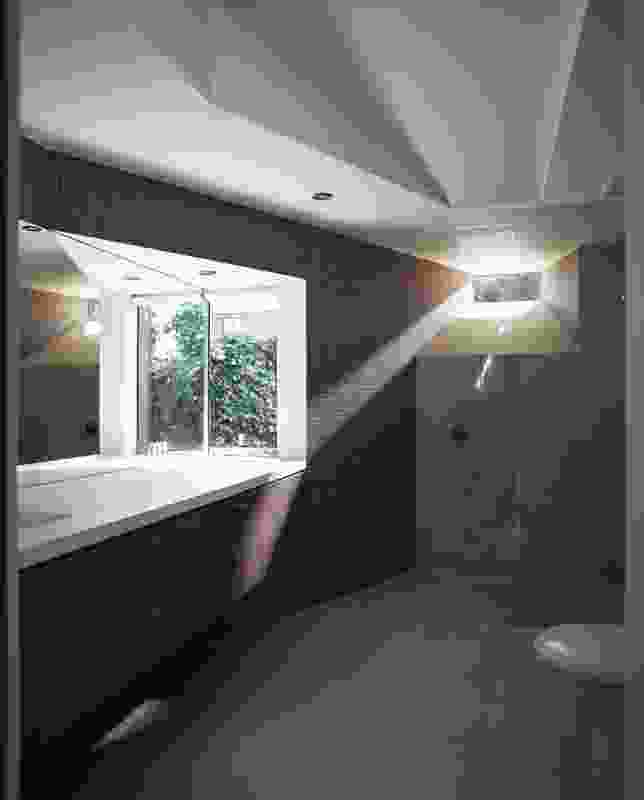 The new ensuite features a north-facing pop-out window that reaches out to the sunlight. 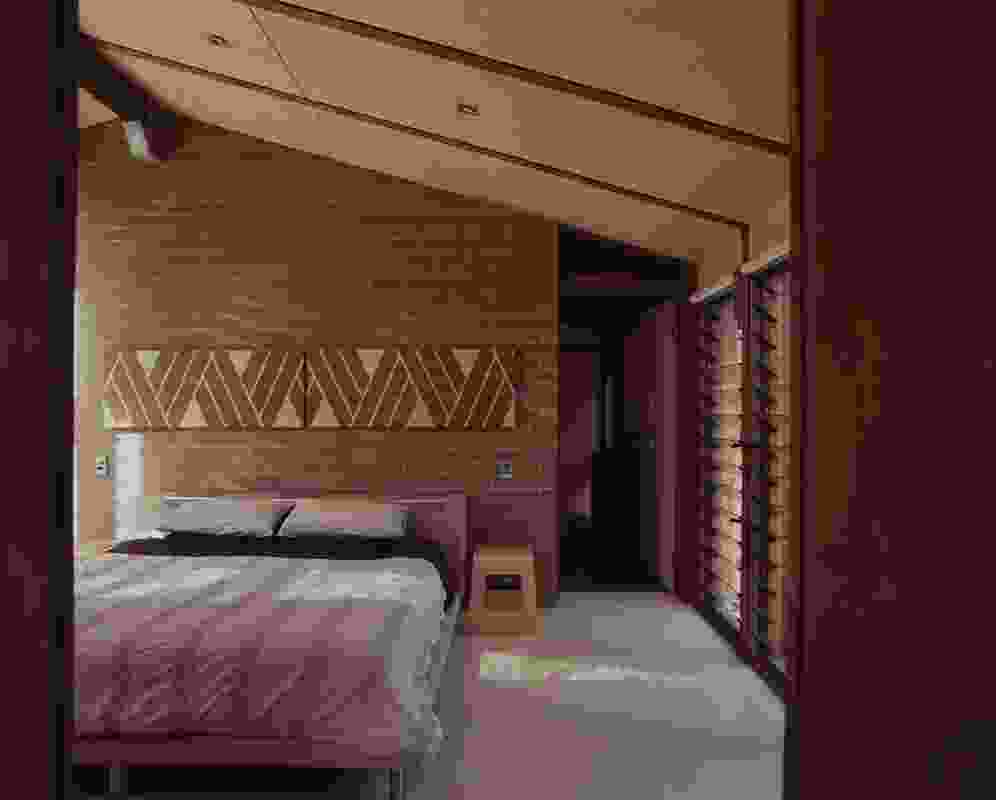 Transparent and open to the garden on two sides, the new bedroom has ample sunlight and fresh air. Artwork: Flashback Fabrics.