With an appreciation of vastness, infinite variety and our temporary occupation of land, each residential project by Phorm Architecture and Design has a deep connection to its site.

A new reading of indoor and outdoor spaces is created at House in Hamilton.

It’s no small gesture that Phorm Architecture and Design’s Paul Hotston inscribed the lyrics of The Go-Betweens’ song “Cattle and Cane” onto the timber beams of a recent project. Like everything made by Paul as director of his sixteen-year-old practice, the inscription was an act of consideration, poetry and reverence for place. The lines may well define the location of many of Phorm’s projects in regional Queensland or those that thread in and around Brisbane’s Queenslander homes:

The lyrics have their permanent place in the tower annexe of the much-awarded In-Between Room (see Houses 98), tattooed into the home’s bones as a small and lasting paean. This house was once the home of The Go-Betweens’ Grant McLennan, and he and fellow band member Robert Forster played and composed there together. The flimsy two-storey tower sitting behind the main house – a Queenslander of much grander notions – would have been the target of demolition in many revamp projects, but Paul’s understanding of history, expediency and place meant that he saw this as anathema. He instead devised a celebratory transparent chapel room that connects the tower and the original home.

Phorm’s oeuvre has deep roots in cattle and cane locations, and tin and timber materiality. Paul set up shop in Brisbane in 2000, with a keen interest in residential work. Like many practices before and since, Phorm was initially run from home (in this case, Paul’s front verandah in inner-city Highgate Hill). It was then moved to its current studio in nearby West End. Paul’s formative years, before 2000, were spent in Townsville working with Bruce Barrett and Associates (later Architects North).

The northern exposure threw the young graduate in at the deep end, and he worked on broad-ranging projects with multimillion-dollar budgets across a wide geography.

“I was part of a small practice where we were engaged to do everything from hospitals to council chambers, and museums to residential work,” recalls Paul. “It was daunting at first, but wonderful when [I] just gave in to it.”

A projected two-year stint in the subtropics turned into seven years when his hometown of Brisbane beckoned, but Paul has continued to pursue work in the regions. Something about the vast and unyielding landscapes has been part of the lure.

“I had a year away in Europe after graduating, but I was always drawn back to Australia , with its infinitely open spaces. You can establish an identity here, but in Europe things are more fixed.”

He examines in his work the idea of the local, of a sense of place. In this, he followed closely the work of Lindsay and Kerry Clare and John Mainwaring on the Sunshine Coast, and was well tutored at the University of Queensland by both Brit Andresen and Peter O’Gorman, whom he describes as “the two great gatekeepers” of his education.

Alongside an appreciation of vastness is the correlative of how temporary our human-made structures are, and indeed our occupation of the land. Paul recalls the big family gatherings of his childhood, in a large colonial homestead in a remote town near the Tropic of Capricorn.

“There was something different about how they made place – there was always that sense that the occupation of the land was so new. I remember realizing one Christmas Day that nobody had a shadow – it was like a Russell Drysdale image of how lightly we occupy the landscape.”

It was an understanding carried on to one of his earliest residential projects, Lilliesmere Lagoon. The house sits in a vast, featureless landscape of cane fields, dissected only by the cane train bridge in the middle distance and a broad lagoon in the foreground. Two tall crushing mills (the “cathedrals of the north,” says Paul) offer the only vertical element. After cane fires, the landscape is covered in the “black snow” of cane trash. The house responds to each of these conditions, and is arranged around a central courtyard where the pool water seems as one with the lagoon. Axes are carefully arranged to capture the landmarks. Responding to large agricultural sheds, the house’s low-lying, blackened forms and pared-back articulation avoid the pitfall of being lost or discordant in the landscape. “Many house forms just look twee in this space,” says Paul.

In a thoroughly urban context and on a far more diminutive scale, Whynot Street positions an open-air “tearoom” pavilion within a small suburban backyard of Arcadian unkemptness. The raw materiality of fibro and timber is celebrated. A perfect framing of a silky oak tree beyond is reminiscent of traditional Japanese tea houses and their placement in a more manicured and miniature landscape. Later, an undercroft infill was added to the main house, and both this and the tearoom bridge serve as a testing ground for how to extend inhabitation of the existing Queenslander on site and connect it to the garden, all on a shoestring budget.

Phorm consistently proposes an architecture for the suburbs that slides easily and almost invisibly into an untempered landscape. The lightweight, the mid-scale, the impermanent structures of the suburbs and how they can evolve are part of an ongoing conversation. The condition of the marginal separation of object and landscape is under constant surveillance. Red Soil House defers to the geographical and geological context of the Glass House Mountains and the Maroochy River plains; their Indigenous mythology is thoroughly explored by Phorm, and honoured in the red colour and in vistas from a new courtyard. Taringa Treehouse proposes an “adult cubbyhouse” in a backyard where its meticulously devised geometries serve to amplify all the beautiful experiences of the natural surrounds rather than impose a heroic form onto the canvas.

“The challenge is to add and not subtract from the experience of the backyard with the introduction of the architecture,” Paul notes.

This is the humble mantra of Phorm’s work to date. House in Hamilton extends the conversation of the Queenslander. This landmark project is the result of an intense collaboration with both the client and Tato Architects’ Yo Shimada in Japan. Shimada was intrigued by the Queenslander’s interstitial spaces and by the owners’ tendency to raise and infill. House in Hamilton swaps the tectonic from timber to steel, and works with the typically tight tolerances of Japanese spaces to deliver a new reading of indoor and outdoor spaces, shaded edges and hipped roofs.

“It was never intended as a ‘starchitect’ project,” says Paul, “but rather to go outside [traditional] Queensland architecture and challenge the rules.” This respectful collaboration, he says, has given the mid-career practice a new lease of life and a passion for further collaborations. 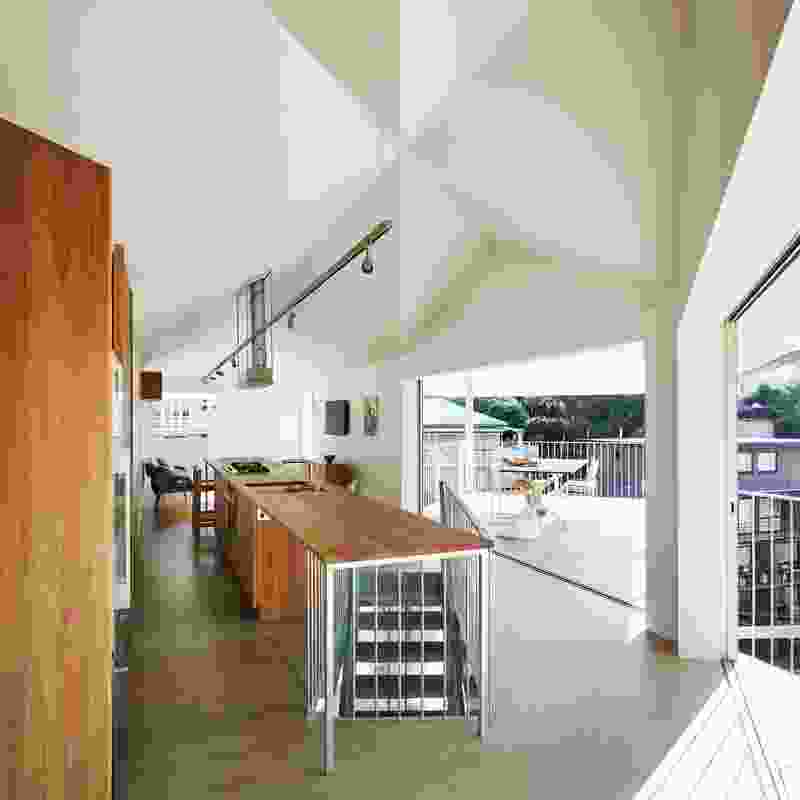 A new reading of indoor and outdoor spaces is created at House in Hamilton. 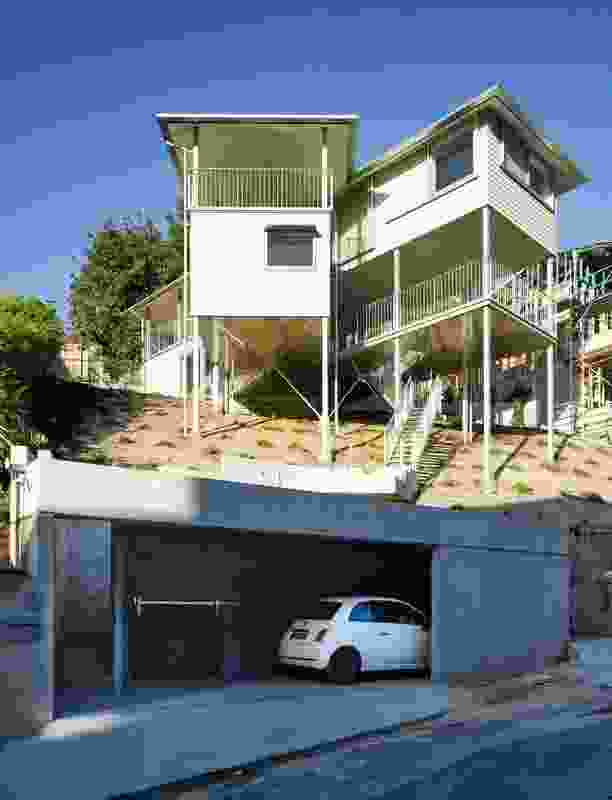 With a strong Japanese influence from collaborator Tato Architects, House in Hamilton is a reinterpretation of a Queenslander. 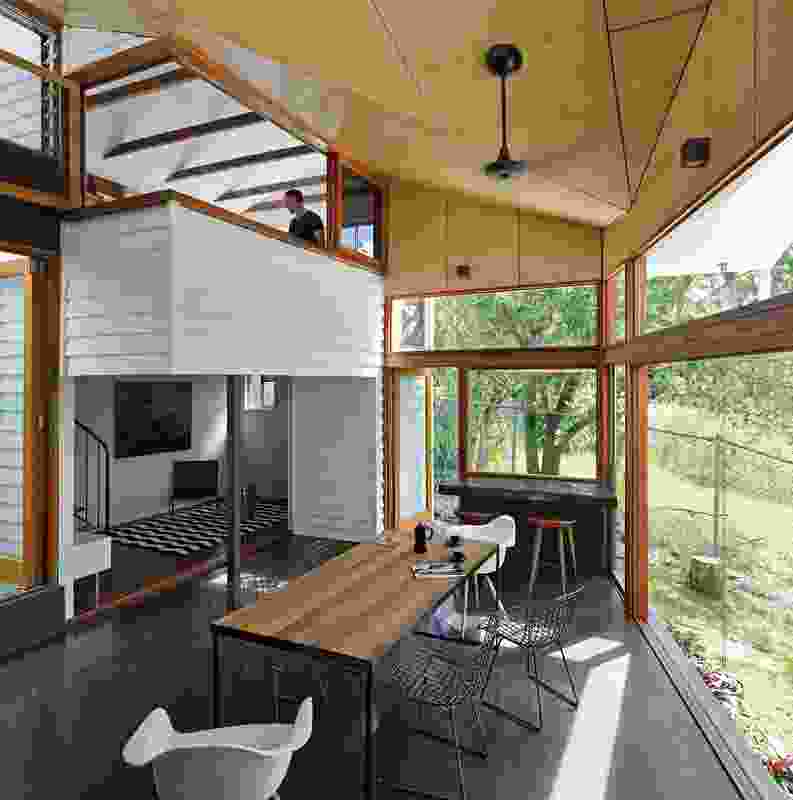 The In-Between Room (2013) is a “celebratory transparent chapel room” that connects an existing two-storey tower to the original home. 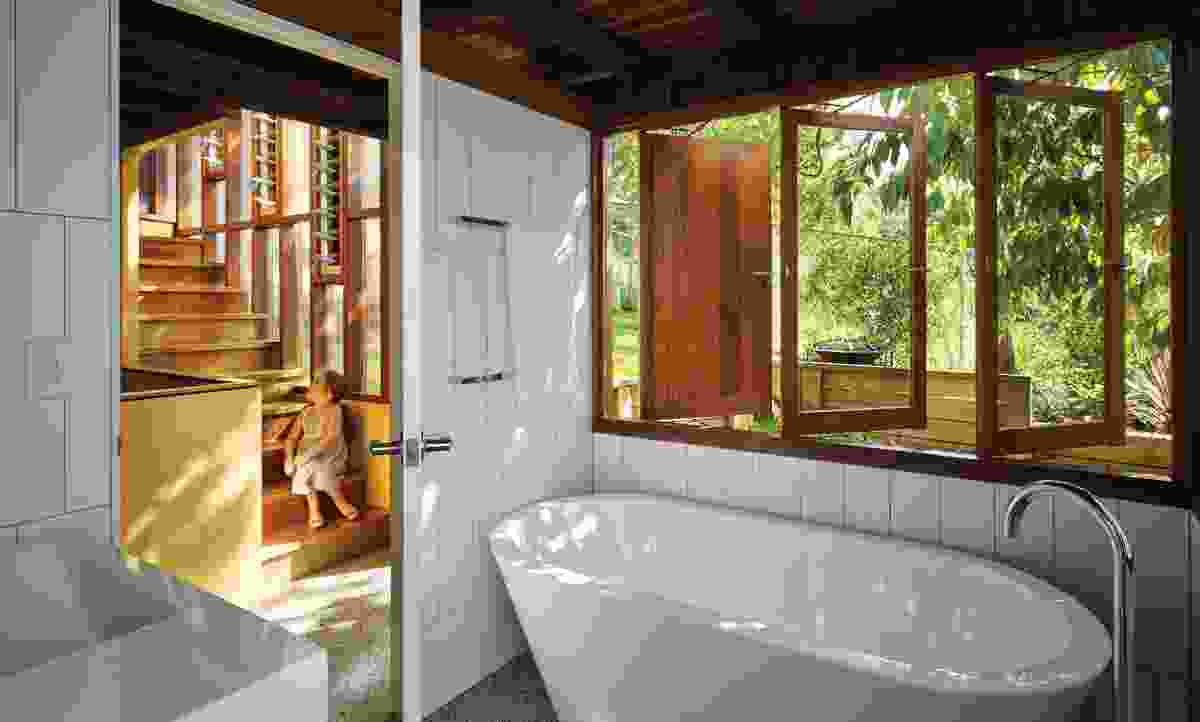 The undercroft of the In-Between Room (2013) includes a new bathroom with a connection to the backyard. 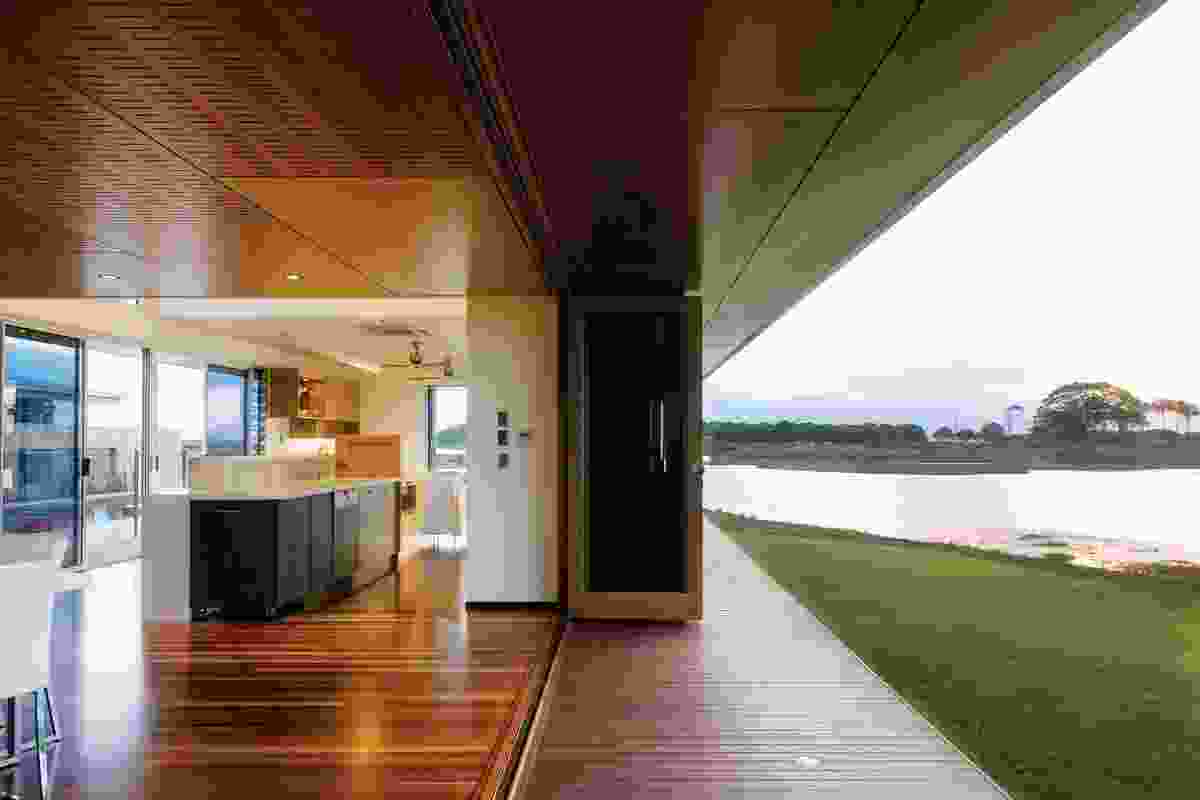 The Lilliesmere Lagoon house (2006) is arranged around a central courtyard in response to the surrounding landscape of cane fields and lagoon.

The raw materiality of fibro and timber is celebrated at Whynot Street (2009). 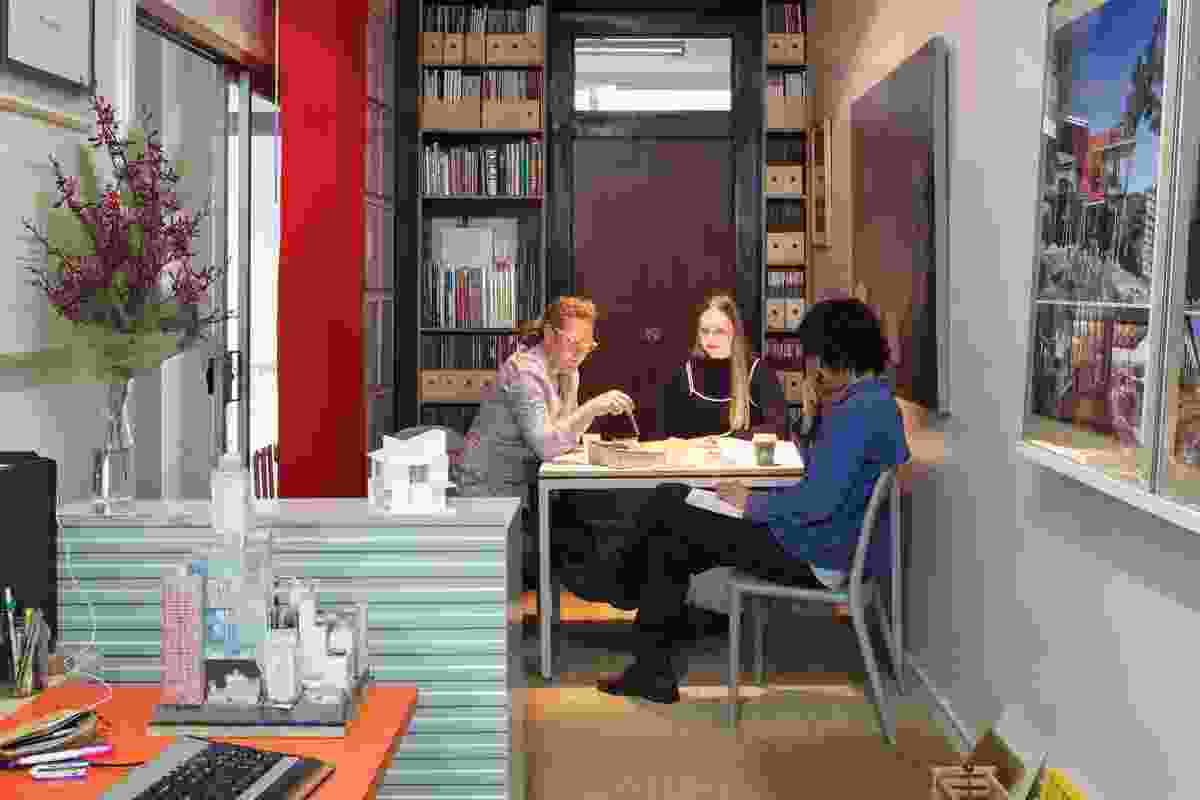 Paul Hotston and his colleagues in Phorm Architecture and Design’s studio in Brisbane’s West End. 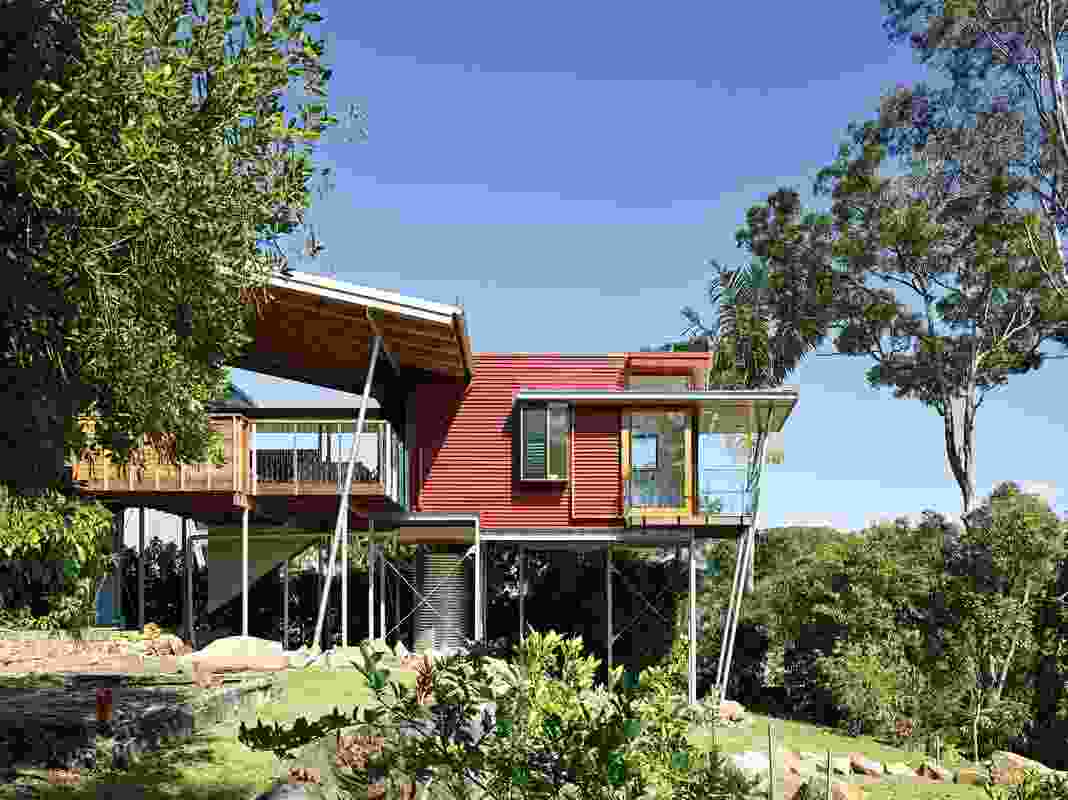 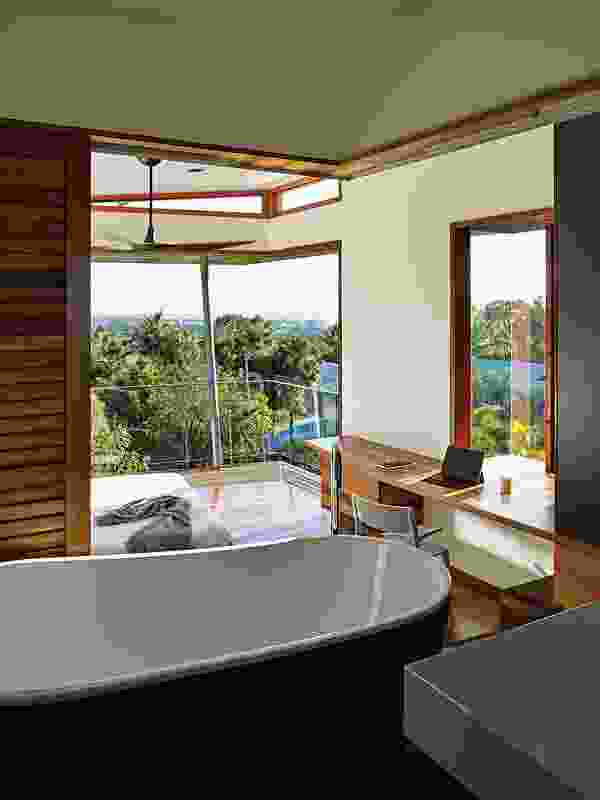 The Red Soil House (2014) emphasizes its geographical and geological context through elevated views. 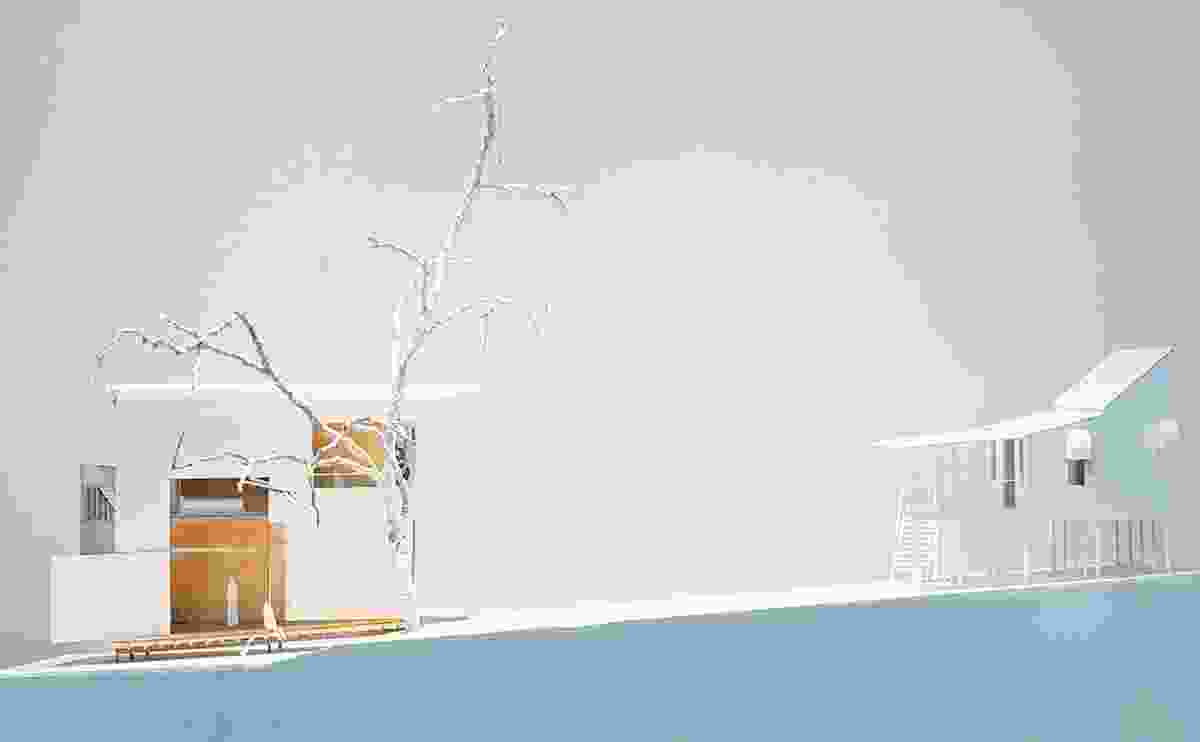 A concept model of the Taringa Treehouse. 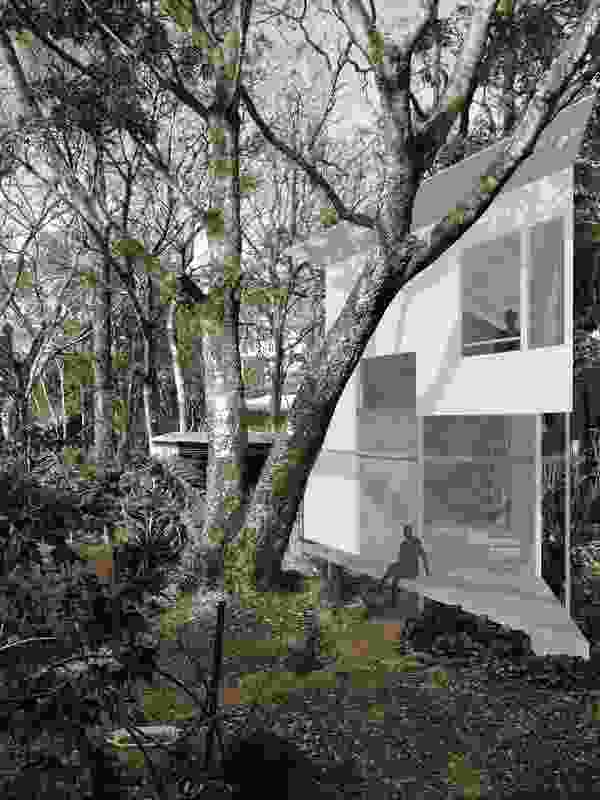 Taringa Treehouse proposes an “adult cubbyhouse” that strives to amplify the beautiful experiences of its natural surrounds. 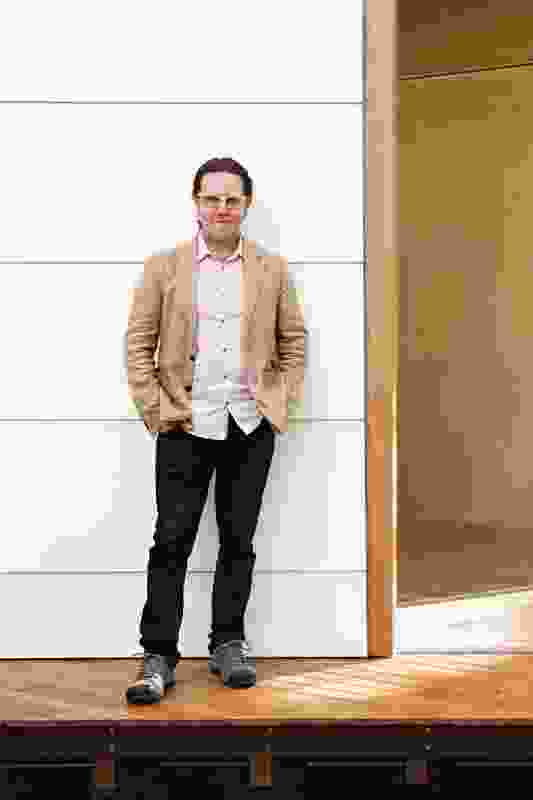