Somewhere Other by John Wardle Architects at the 2018 main exhibition.

The 17th Venice Architecture Biennale has been postponed, again, in response to the COVID-19 pandemic, and will now take place from 22 May to 21 November in 2021.

Curated by Lebanese architect and educator Hashim Sarkis, this iteration of the international architecture exhibition is based around the question: How will we live together? – a theme that the biennale’s president Roberto Cicutto noted was “more relevant than ever” in this time of widespread lockdowns and social distancing.

“The last few days have clarified the real state of the situation we are all facing,” he said in a statement. “With the utmost respect for the work done by all of us, the investments made by the participants, and considering the difficulties that all countries, institutions, universities, architectural studios have met together with the uncertainty of the shipments, personal travel restraints and COVID-19 protective measures that are being and were be adopted, we have decided to listen to those, the majority, who requested that the Biennale Architettura be postponed.”

The 2020 Venice Architecture Biennale was initially postponed in early March from May to August due to a significant outbreak of the COVID-19 in northern Italy. The region has been among the world’s hardest hit areas and Italy as a whole has recorded more than 225,000 confirmed cases and more than 32,000 deaths. The Veneto region, which Venice is the capital of, has itself recorded nearly 20,000 confirmed cases and 1,793 deaths.

In April, the Australian Institute of Architects announced it would not participate in the biennale, pulling the exhibition proposal In Between by creative directors Jefa Greenaway and Tristan Long.

The organizers of the biennale acknowledged that it was “impossible to move forward – within the set time limits – in the realization of such a complex and worldwide exhibition, due to the persistence of a series of objective difficulties caused by the effects by the health emergency underway.”

Cicutto said that participants, including countires, institutions, and studios had experienced difficulties relating to uncertainty of shipments and personal travel restraints. “We have decided to listen to those, the majority, who requested that the Biennale Architettura be postponed,” he said.

The exhibition curator Hashim Sarkis said he hoped the postponement would give participants time to “catch their breath” and complete their work with the time and vigour it deserves.

“We did not plan it this way,” he said. “Neither the question I asked How will we live together? nor the wealth of ways in response to it, were meant to address the crisis they are living, but here we are.

“We are in some ways fortunate because we are well equipped to absorb the immediate and longer-term implications of the crisis into the Biennale Architettura 2021. The theme does also provide us with the possibility to respond to the pandemic in its immediacy. This is why we will return to Venice in the coming months for a series of activities devoted to the Architecture.”

The 59th International Art Exhibition, curated by Cecilia Alemani, which was to take place in 2021, has been postponed to 2022. 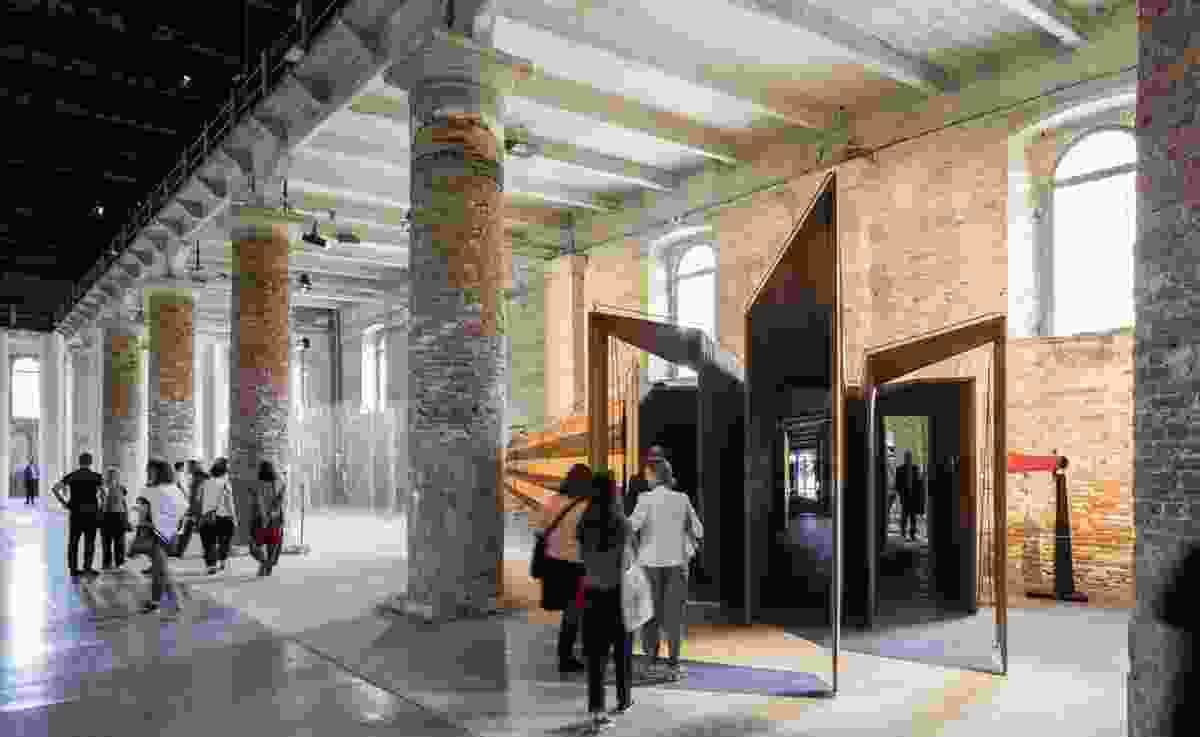 Somewhere Other by John Wardle Architects at the 2018 main exhibition.