A continuing city: The work of 2018 Gold Medallist Alec Tzannes

Through the lens of an “overriding preoccupation with the city,” Philip Goad examines the architectural oeuvre of 2018 Gold Medallist Alec Tzannes, who has “helped to build and shape the difficult metropolis that is Sydney.”

Architectural history has a tendency to pigeonhole its protagonists, often assigning them a place based on a small number of buildings and from the limited purview of a single building type. For gifted architect Alec Tzannes, this happened early. A series of elegant, formally composed townhouses, designed in the 1980s, caught professional attention and captured effortlessly the mood of a swing to history. His urban houses had (and all those ever since have also had) the pedigreed echo of Sydney’s colonial Georgian past and the work of its early-twentieth-century inheritors such as William Hardy Wilson and John D. Moore, as well as the Mediterranean rightness of Leslie Wilkinson’s houses, which negotiated Sydney’s steep harbourside sites with artful informality. Tzannes’ houses also demonstrate a complete understanding of mass and its embrace of Sydney’s lilting sun and shadow, while exhibiting accomplished modernist spatial control. But what is really at issue in all of these houses and missed by commentators is Tzannes’ overriding preoccupation with the city – as an ongoing project of cultural and formal continuity and as a project fuelled by an ethical responsibility to place.

Tzannes was a brilliant student at the University of Sydney, where he won the Sir John Sulman Prize and the University Medal in 1976. However, it was his later experience at Columbia University, which he attended after receiving a Fulbright Award and several other scholarships
and from which he graduated in 1978, that turned his mind to history, typology and the city. Some forty years later, the award of the 2018 Australian Institute of Architects Gold Medal is a fitting tribute to an architect who has, across a complete range of diverse building types and urban masterplans, helped to build and shape the difficult metropolis that is Sydney. Ever modest and unassuming, Tzannes might dispute this claim. But given the completeness of his body of work, his roles as the Institute’s national president (2007–08), national councillor and dean of the Faculty of the Built Environment at the University of New South Wales (2008–16) and his nurturing of staff and colleagues such as Phillip Rossington, Peter John Cantrill and current directors Jonathan Evans, Mladen Prnjatovic, Ben Green and Chi Melhem, Tzannes’ contribution is weighty. This is an architect who has given at all levels.

A clue to Tzannes’ unwavering commitment to the city was evident early in his design for the Federation Pavilion in Sydney’s Centennial Park (1988), undertaken in collaboration with artist, friend and former housemate Imants Tillers, with landscape design by Walter Barda. The domed, tholos-like structure revealed his implicit understanding of the role of the monument as an artefact, to be contextually placed with pinpoint precision within an urban or natural landscape. For Tzannes,the importance of a building and its relationship to the objects and spaces around it are key design drivers. Indeed, a series of Tzannes buildings such as the gently vaulted ferry terminal on the Parramatta River at Homebush for the Sydney Olympics (1999), the Olympic Cauldron memorial and Overflow Park at Homebush (2001) with Evans, the street lighting for Anzac Parade in Canberra (2001) with electrical engineer Barry Webb and Richard Johnson, the adaptive re-use of Fort Denison (2001) and the gateway for Federation Drive at the entry to Centennial and Moore Park (2003) with Cantrill reveal Tzannes’ consistent resolve to quietly make sense of existing urban conditions. He defers to past patterns, heightening existing forms and spatial relationships, or he introduces a new landmark to give clarity, even focus to a previously incoherent urban place. At the National Art School (2004), for example, his
scheme was to insert new buildings aimed at knitting together and consolidating the original panoptic masterplan of Old Darlinghurst Gaol.

Every Tzannes multiresidential project bids to reinforce existing urban walls and create a morphologically consistent precinct, while at the same time providing apartments with balconies, cross-ventilation and access to natural light as a necessary urban right. Whether in the CBD, the suburbs or a regional town, the apartment building is seen as a linchpin
in city-building over speculation. And then there are the buildings, masterplans and building programs of the schools on which Tzannes has worked for years, such as Cranbrook Junior School in Rose Bay (with Rossington) and the Jo Karaolis Sports Centre at St Catherine’s Junior School in Waverley. Each campus is a city in miniature, expertly calibrated to create child-scaled spaces and urban places.

Perhaps it’s the multi-award-winning Irving Street Brewery (2015, with Green), fulfilling its role in the Frasers Broadway masterplan, that stands as one of Tzannes’ most important recent exemplars. The crowning of a 1920s brewery with a near futurist-formed trigeneration plant for a massive new six-hectare residential precinct on the edge of Sydney’s CBD resulted in a new urban landmark. Adapting the historic building and boldly adding to it not only resurrected the industrial shell, but gave the entire precinct its key wayfinding element. From the empty and banal, Tzannes created a “useful” monument.

On a personal level, Alec Tzannes is no demagogue. He is absolutely committed to his profession and to its discourse. In 1981, writing about the houses of Espie Dods, Tzannes might also have been writing about his own deeply held design philosophy: “A common thread underscoring the work is his attitude of acceptance of things as they are and as they were as opposed to concerning himself about things as they should be.”1

The difference is that Tzannes’s ambit is much broader and his architecture is not static. I would also say, as Ernesto Rogers did in 1957, that “The concept of continuity implies change within the order of a tradition.”2 For Tzannes, there is no modernist chest beating about what the future ought to entail, but he and his practice are completely open to contemporary advances in technology and sustainability. These advances are simply absorbed into the greater project of the city. Witness the six-star Green Star-rated International House Sydney in Barangaroo (2017, with Evans), Australia’s first example of a cross-laminated timber commercial office building. Its internally exposed structural timber trusses and its ground level of herringbone timber props are a dutiful nod to the oft-misunderstood public intentions of Harry Seidler’s multi-propped slab block at Australia Square (1967) of some fifty years ago.

Another recent project is also emblematic of the undiscussed breadth and scale of the Tzannes office. Dangrove, an art storage facility in Alexandria (2018, with Melhem), designed to house philanthropist Judith Neilson’s collection of contemporary Chinese art, is at one level extraordinary but at another entirely typical of Tzannes’ complex oeuvre. Hidden in Sydney’s flatlands close to the airport is a near monumental project, planned and built with the ruthless efficiency of a major industrial enterprise. The heart of the project is a giant wedge-shaped volume that has the stature, aesthetic and spatial, of a major international gallery of contemporary art. Here is Tzannes at his most self-effacing and his most grandiloquent. When I visited this space last year, I could not believe its scale and its breathtaking quality of natural
light; this is a most beautiful “shed” for art, perfectly pitched for its client, its site and its city.

More than twenty years ago, I wrote about Tzannes’ conversion of a 1930s hotel to create Bistro Moncur (1992, stage 1 with Greg Anderson) in Woollahra, with its now iconic mural by Michael Fitzjames. Since that time, his office has added a neighbouring block to it (2007). It’s become a Sydney institution, weathering the chattering tides of fashion, and is a testament to Tzannes’ skill in deciding just how much to up the ante. He consolidated an urban block, not with
a unitary mask but instead with the recognition that the city is a necessary layering of time, production and materiality, which under the best of circumstances has its characteristic morphology reinforced. It’s no accident then that the City of Sydney should have commissioned Tzannes in 2012 to design its public domain furniture: seats, rubbish bins, drinking fountains and tree guards. These are a city’s essential elements, items taken for granted as natural and intrinsic.

For Tzannes, every architectural problem is one of the city. In this, his approach and his outlook are decidedly European. He’s not interested in image-making but in adding to, adapting and shaping the city in favour of its ongoing consolidation as a place of urbanity, equity and legibility. This sounds like a grand vision but it’s not. It’s one grounded in the idea that the city can be understood as a phenomenon that deserves close study, sensitive treatment and deliberate, conscientious and targeted adaptation and addition. In 2018, the award of the Australian Institute of Architects’ Gold Medal to Alec Tzannes is a timely reminder that the built and natural environments are larger than ourselves and our egos, and that a certain humility might be fostered, even required, to engage with their greater questions. That is Tzannes’ contribution. Bravo, Alec.

A continuing city: The work of 2018 Gold Medallist Alec Tzannes 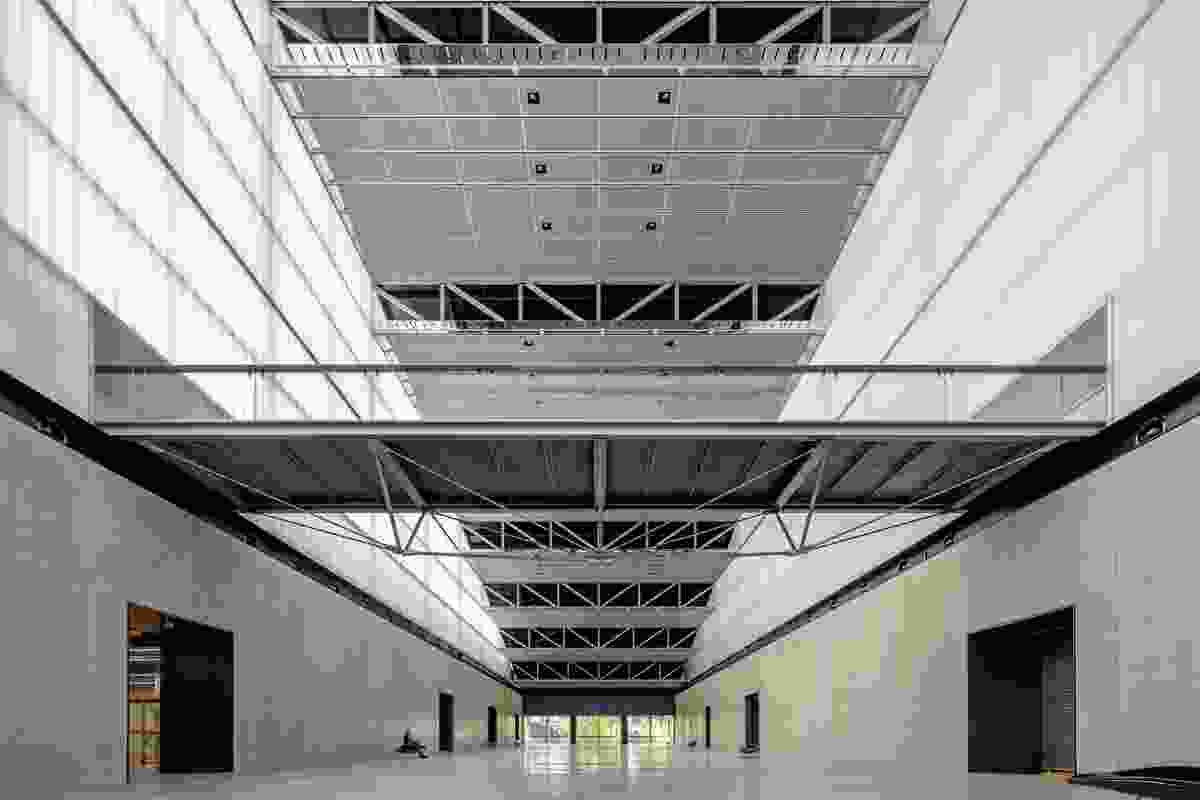 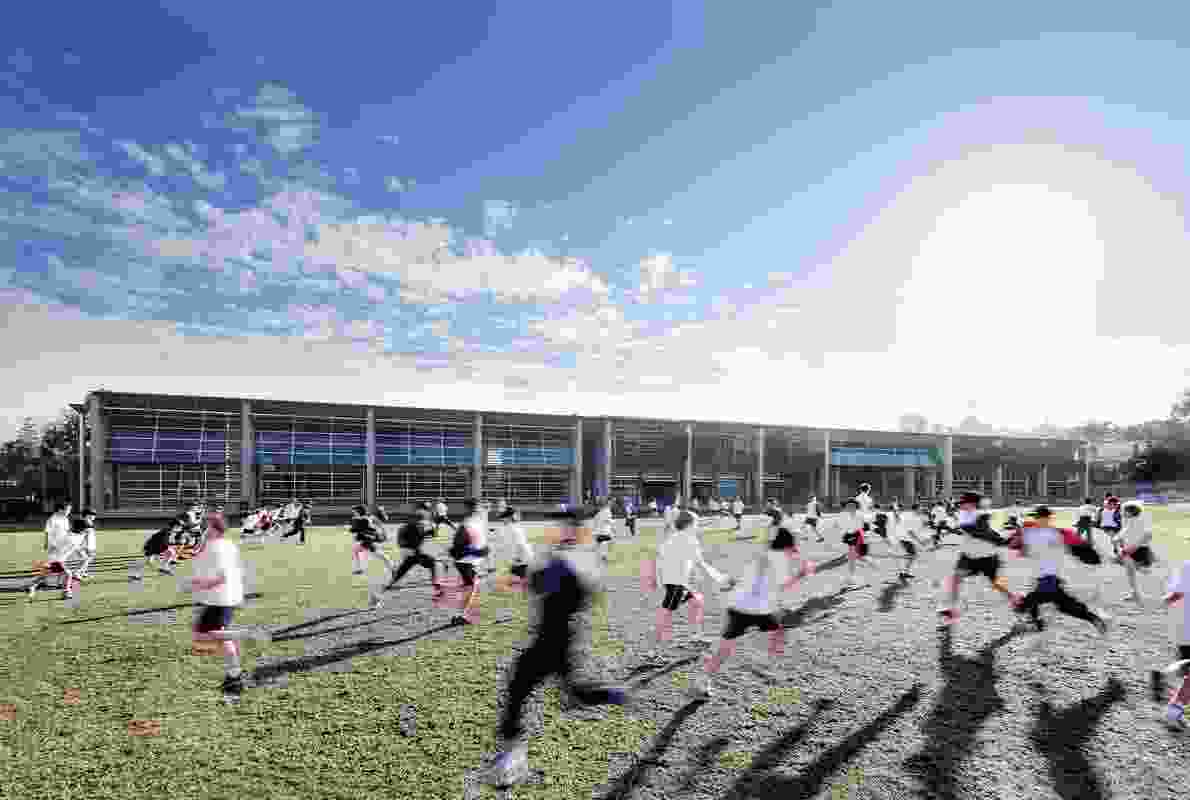 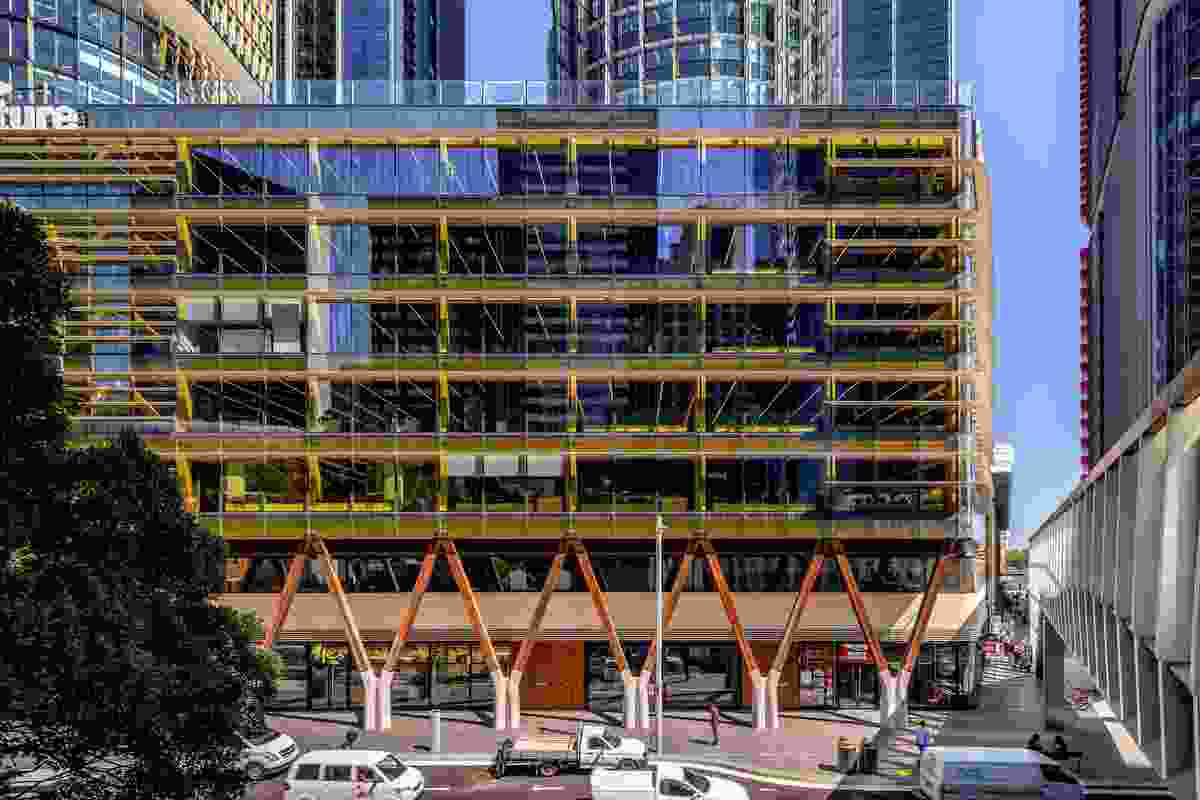 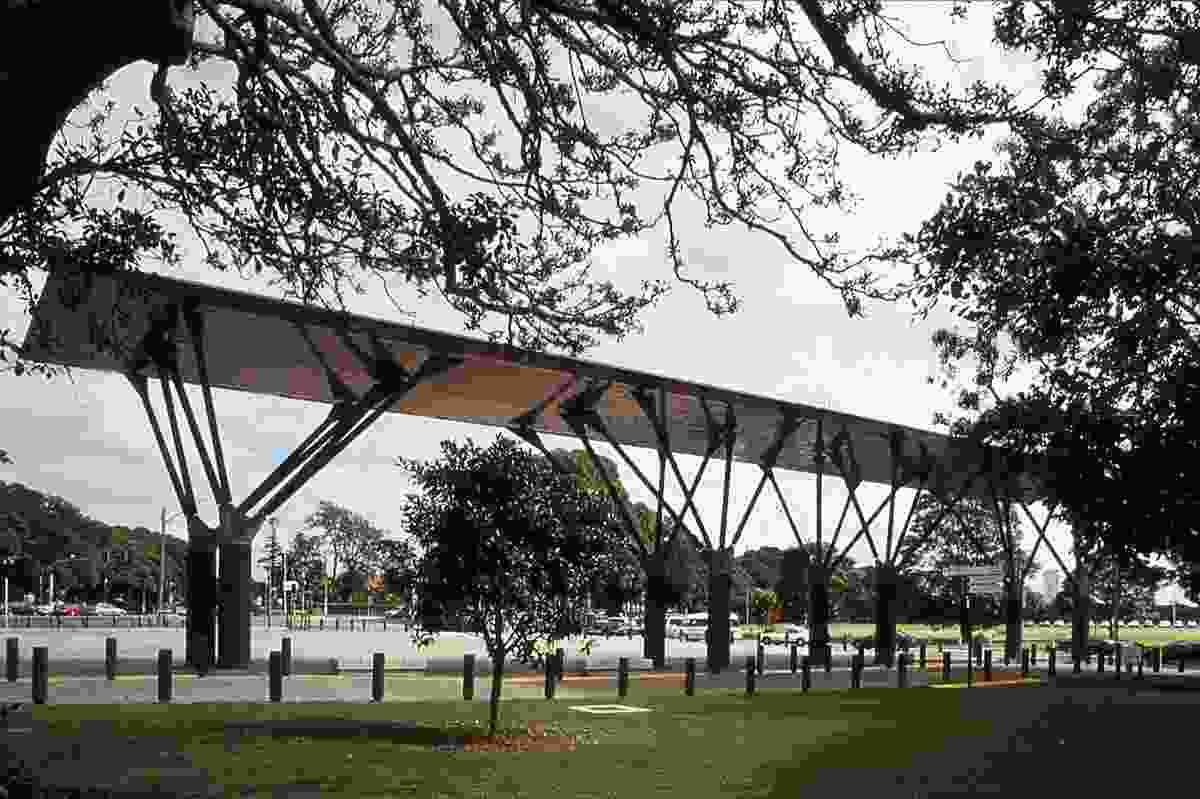 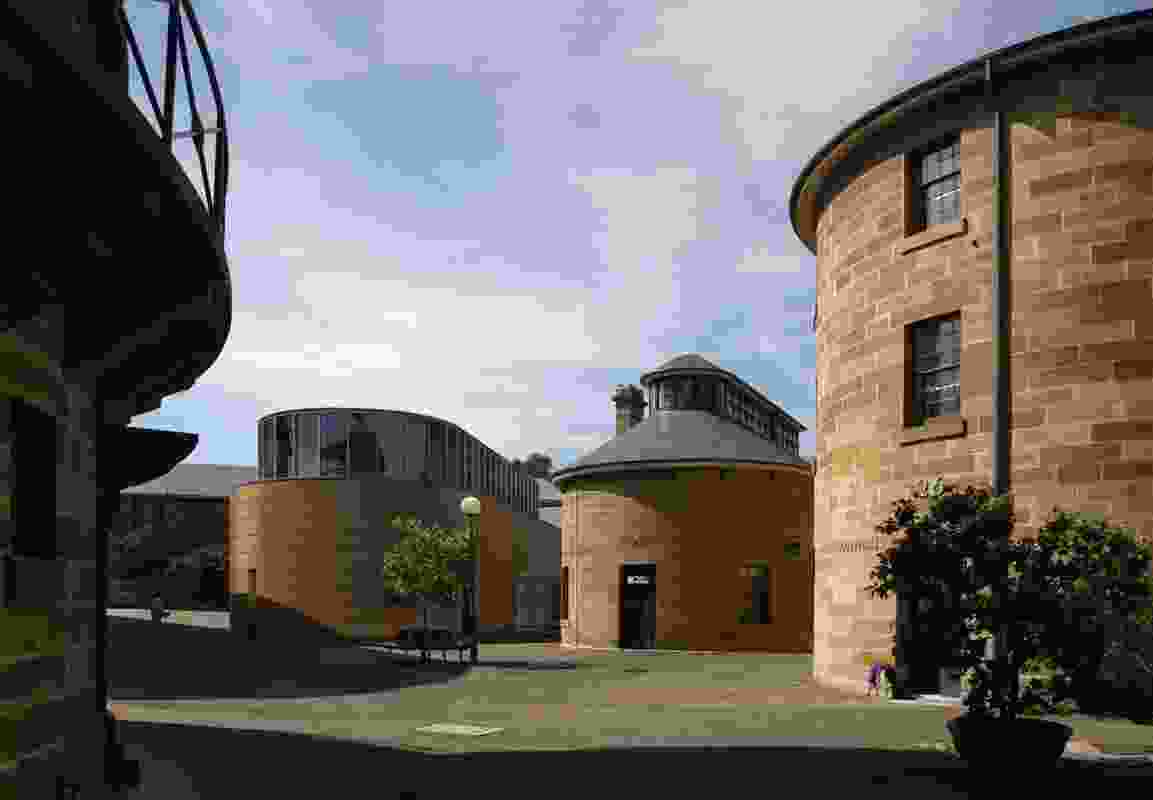 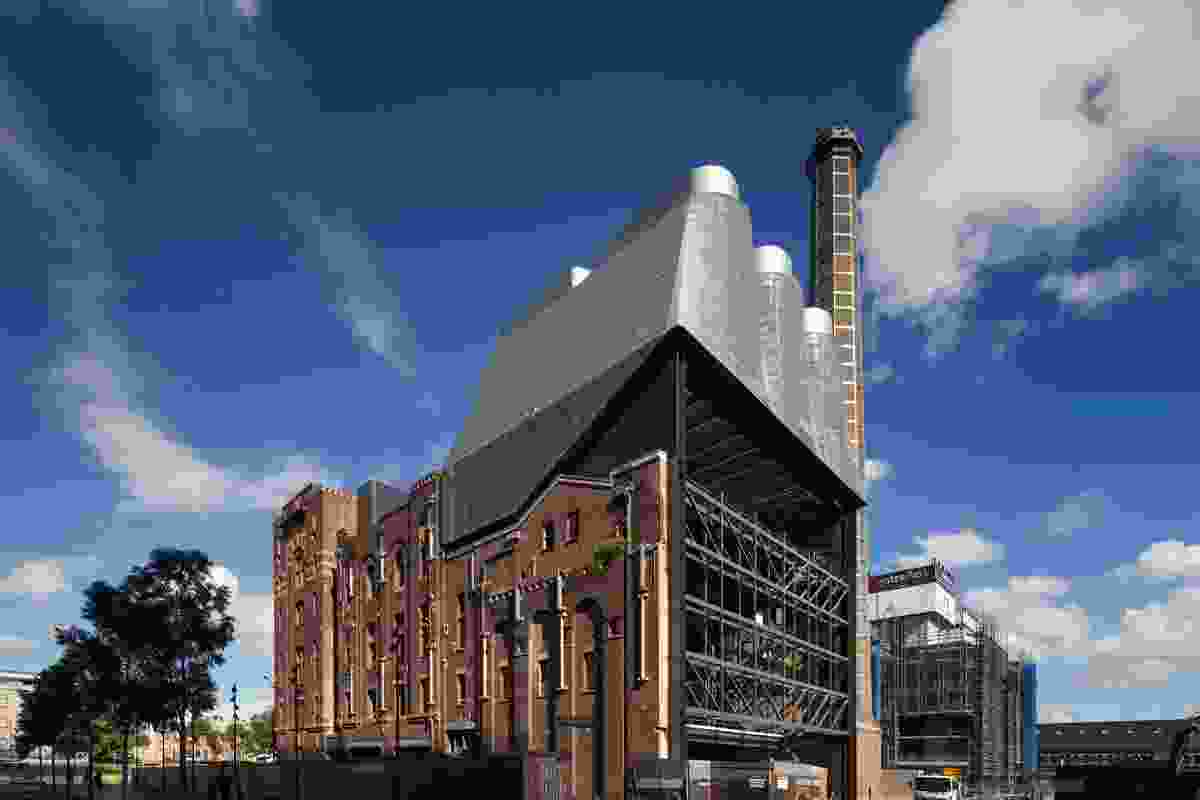