The windows are double-framed, making the glazing blast-proof in the unlikely event of an explosion at the nearby port.

Sometimes the measure of an interior’s success is the deeply misleading appearance that the designers haven’t done much at all. With Gathered in Footscray, this is the case in the most positive possible sense. Ewert Leaf has taken a space with great “bones,” an industrial behemoth of a shell, made a few key moves, solved a tonne of logistical and functional problems (mostly invisibly) and created an interior that works on many levels. It operates on these multiple levels simultaneously, while calmly appearing to do very little at all.

This is not a claim to minimalism. Gathered is intensely material and thoroughly materialized, from those aforementioned “bones” up. The heritage brick shell with which the design team and client began is part of a larger industrial structure with a fascinating history of industrial production and innovation, dating back to 1875 when the site was a jute factory. In 1906, the site was repurposed into Australia’s first rubber factory, and after a varied life through the twentieth century, the industry moved out and the building became home to the global operations for publishing powerhouse Lonely Planet.

The newest incarnation of the site sees a thoroughly “new economy” collection of uses. These include the now- expected co-working space, a thriving makers’ hub, mixed “loft-style” office tenancies and, of course, the restaurant in question, which anchors the north-east corner of the ground floor nearest the Maribyrnong River.

As I have alluded, the apparent simplicity of this inward-looking interior is misleading. As part of the planning process, the Port of Melbourne Corporation was a referring agency, and Gathered’s proximity to the port gave the authority exactly that – authority over what could and could not proceed with the design. The fact that Gathered is, indeed, inward-looking is a function of portside safety protocols: it was not possible to either look out or spill out towards the river in any way, making Gathered an internal-focused proposition.

The unlikely but well-defined potential for explosions on the docks across the Maribyrnong River led to the creation of an entire double-structure system inside each window frame, ensuring that in the event of a large explosion, the window frames themselves would not be blown into the interior. Of course, the opaque glazing installed in all frames meets rigorous safety specifications, and an explosives expert was an unusual inclusion on this otherwise-conventional hospitality fitout design team.

The interior, then, is both visually and literally robust. The brick shell is girded by a chunky and over-scaled steel structural skeleton, with rivets and welds aplenty. The designers have emphasized this frame with concealed lighting, which creates a wash of light behind each structural steel column. The concrete floors are practical and unforgiving, and yet entirely in keeping with the balance of finishes throughout.

A key challenge for Ewert Leaf was the prescription to take such an industrial framework and create a venue that was warm and welcoming even while staying true to its roots. This was a high priority for the clients also, a talented pair who run the restaurant as an adjunct to a thriving catering and events business. A clear instruction from the clients was “no pastels” or anything on-trend that would date quickly. The designers have responded to this aspiration with enthusiasm.

When working with a restricted palette, every element counts. The raw industrial framework of brick and black steel has been complemented by the soft brown leather of the banquette seating and the raw linen of the tall curtains, which conspire to soften the rectilinear contours of the space. Distinctive pendant lights sourced by the creative client provide additional illumination, but by day the space is flooded with natural light. Viewed overall, when the restaurant is animated by a full house of patrons, as it was on the Saturday morning I visited, the place positively buzzes with warmth and conviviality.

The final piece of the puzzle in hospitality work is the least visible of all. How does the space function for an operational business? Ewert Leaf understands hospitality at its core and knows how to plan a venue – front and back of house – to minimize staff numbers and maximize efficiency. The result is a restaurant that not only looks good but works seamlessly with the smallest possible number of people operating it at any given time. This level of engagement with practicalities was essential for a client who knows the fundamentals of running a viable hospitality business and would expect nothing less.

This is a deceptively simple interior, built on the timely solution to a host of technical, logistical and aesthetic challenges. The overall impression is of a venue that will age gracefully. And the coffee is pretty good, too.

Aboriginal Nation
Built on the land of the Wurundjeri Woi Wurrung and Bunurong peoples of the Kulin Nation. 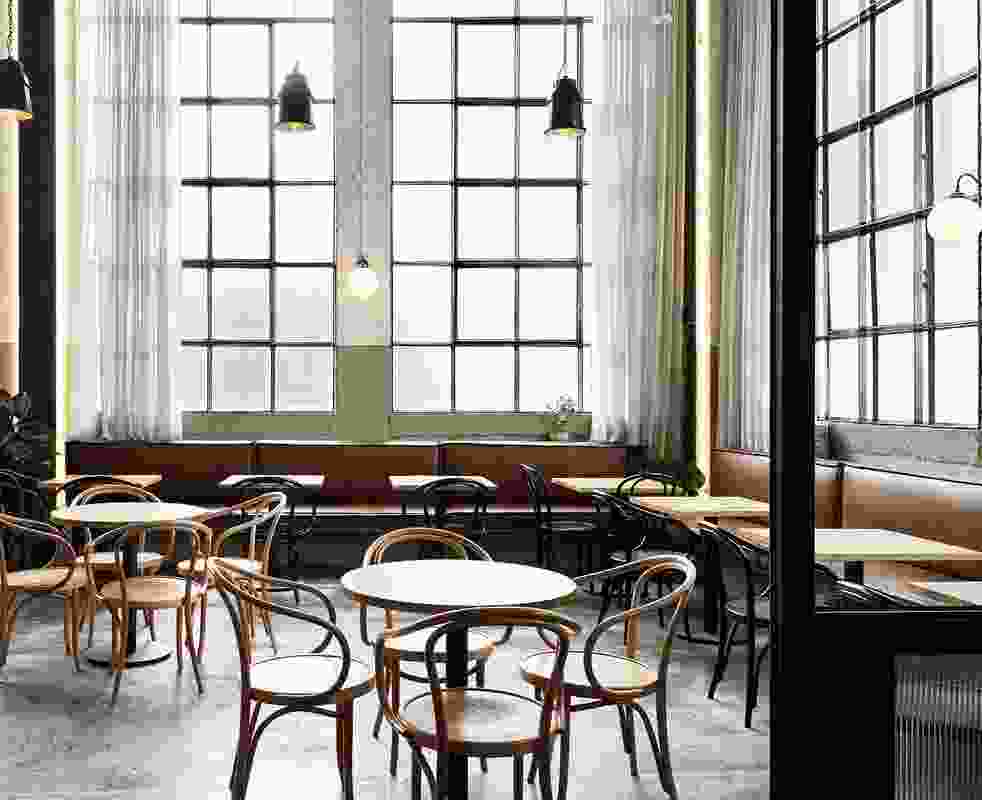 The windows are double-framed, making the glazing blast-proof in the unlikely event of an explosion at the nearby port. 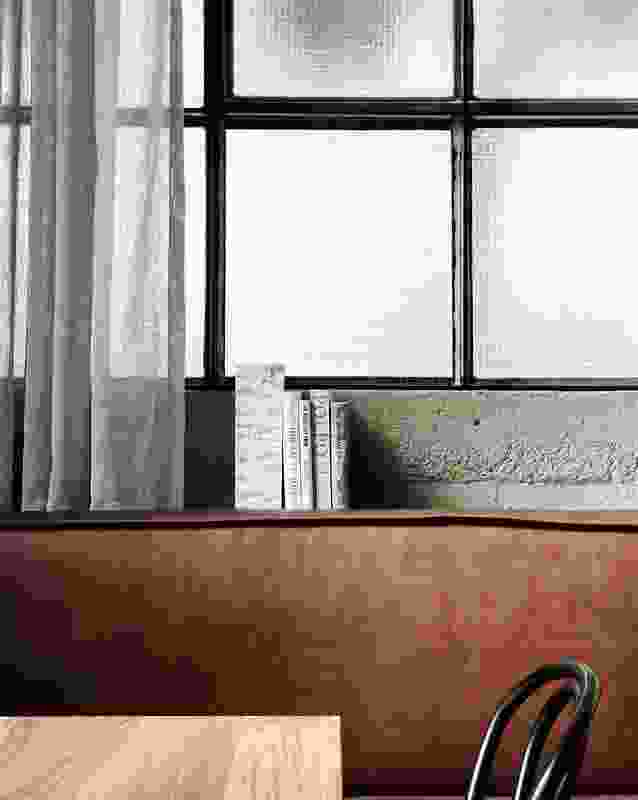 A rich material palette helps give the interior a sense of warmth and welcomeness. 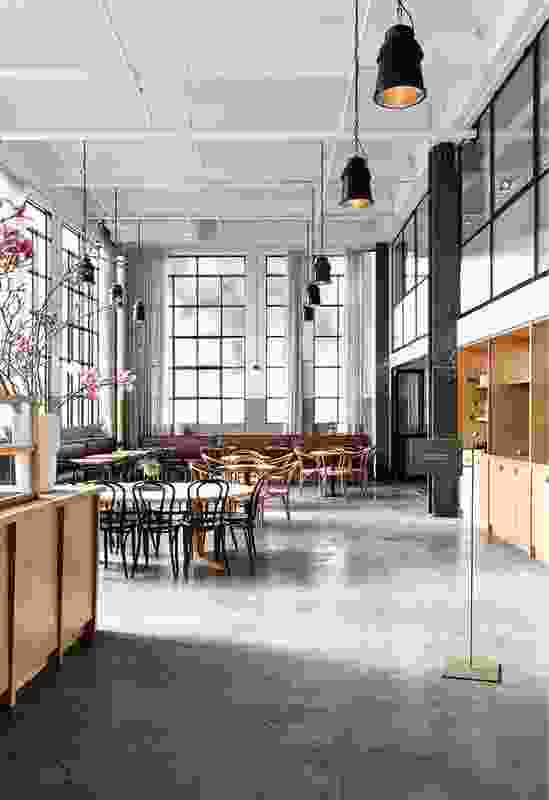 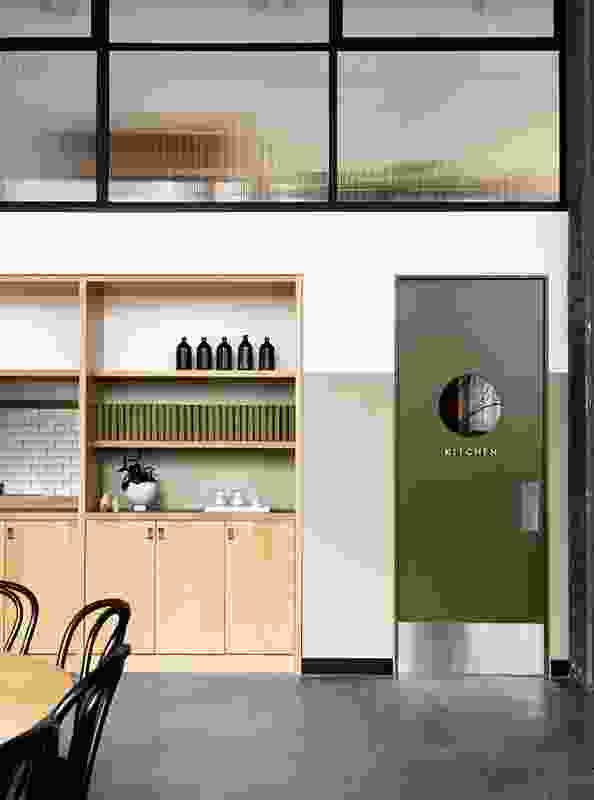 Front and back of house have been carefully planned, resulting in a venue that minimizes staff numbers and maximizes efficiency. 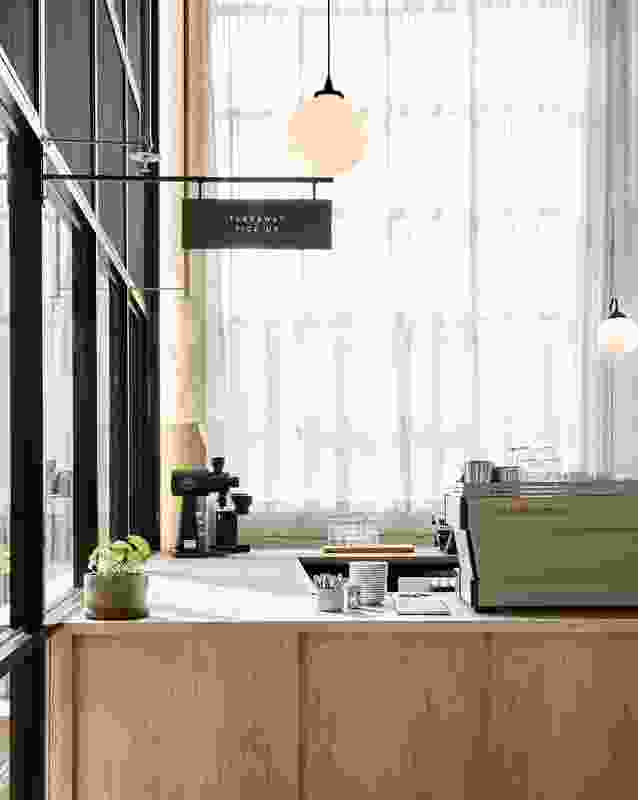 In a space with no outlook, soft linen curtains, detailed joinery and Japanese tiles help craft a space you want to spend time in. 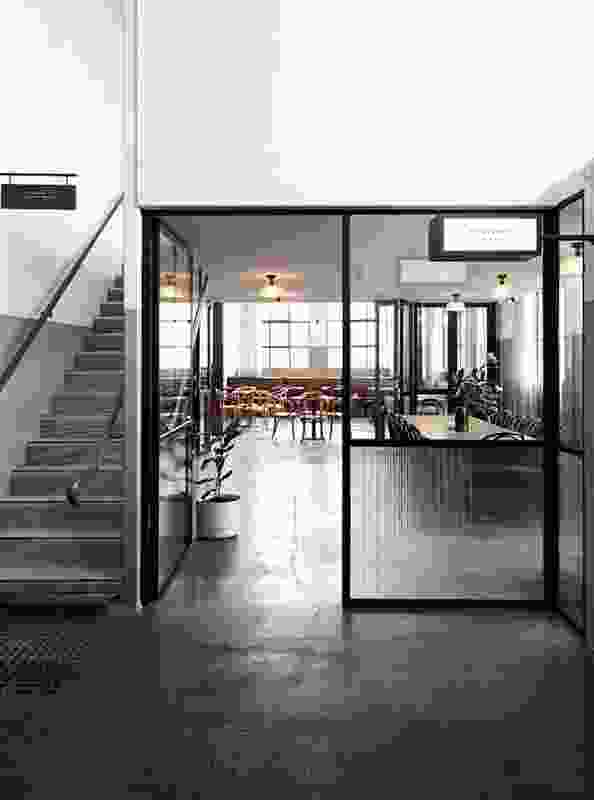 The cafe includes a boardroom space that can be closed off to diners.