A house with tiles on it

Welsh + Major Architects add to a bungalow in Sydney’s heritage suburb of Haberfield.

The extension is wrapped in terracotta roof tiles.

David Welsh, partner at Welsh and Major Architects, describes this extension to a Federation-era bungalow in Sydney’s Haberfield as “a stitch in the streetscape.” It’s an appropriate description if one sees the city as a fabric woven from the threads of housing, commerce, services and transport. This “stitch” sits poised between history and future and responds to the requirements of context using a familiar palette.

With a brief to reinvigorate the house for a family of four, and to reinstate the dignity of the original home and better connect it to the garden, Welsh and Major proposed adding a single-storey pavilion and adjusting the sloped side gardens into a series of winter and summer spaces that can be accessed from a number of rooms. The architects considered the house not just as a building on a block but rather as a series of spaces, both indoor and outdoor. “Different rooms and garden areas were assessed in terms of how they could address the brief – spaces were valued accordingly,” explains David.

Haberfield was the first Sydney suburb to be recognized as a Heritage Conservation Area, and a strict Development Control Plan accompanies this heritage status. It can be difficult to respect such guidelines as well as push advanced architectural solutions, but Welsh and Major has achieved such a balance here. The extension is wrapped in terracotta roof tiles that knit it into the heritage streetscape, but it remains distinctly contemporary.

“Often in heritage areas you see facades retained and restored while out of sight around the back the architect is afforded more free rein,” explains David. “However, [the fact it’s on a] corner site added the challenge that any rear extension would be seen from the side.” Over time, the tiles on the new pavilion will weather and accumulate lichen, and will blend with the overall look of the street.

To the street side, behind a six-foot rendered wall, new levels have been established using off-form concrete garden beds and ponds. These terraces are respectively paved, laid with turf and topped with pebbles so that they can be used as alfresco dining areas, play zones and a courtyard that doubles as an off-street car space. Along the neighbouring boundary, Welsh and Major has inserted a lap pool and courtyard that connects back to the main bedroom ensuite. A multipurpose unit stores bikes and pool equipment and shields the pool area from the eyes of passers-by. What has impressed the owners most is that they now find themselves using every inch of the block.

An unsympathetic 1960s addition that was poorly connected to the house has been demolished, allowing improved access from the hallway into the new volume, which contains the kitchen, dining and living areas, and considerable storage. For the owners and their young family, this new space is mission control. “We do everything there. The light and the way it embraces the garden have made a huge difference to the whole space.”

Oak veneer joinery and an island bench are the calling cards of the kitchen. Timber yacht rails find a new purpose as door furnishings and fridge cabinet handles. A green-tinted glass splashback provides a window onto a fence covered with climbing plants, leftovers from the Italian former owners.

A three-metre ceiling height and glazed bifold doors opening onto each side garden make this a truly “breathable” space. The former kitchen has been transformed into a study-lounge area that is open to the new space and which acts as a “perch” where kids can do homework while maintaining a connection to the family. Daylight and city skyline vistas are visible through louvred windows.

Welsh and Major has deliberately emphasized the juncture between old and new where the stairs and hallway meet by playing with angled planes and skylights that pull in light in interesting ways.

“When you enter from the front door and look down the hall, the folded planes and light at the end of the tunnel signal that there’s something new ahead,” says David. “Rather than make a seamless transition between old and new we decided to create a more dynamic connection where the two butt together.”

As the original house was in good condition, interventions to it were kept to a minimum. New durable tallowwood floorboards tie in with the oak veneer finishes. Welsh and Major has changed the functions of the front rooms: the former main bedroom has become the lounge room, and the former lounge/dining area is now the main bedroom, which has a discreet “timber box” ensuite that stops short of the ceiling, retains the generous proportions of the main bedroom and leaves space for walk-in robes. The functions of the rooms could change again as the needs of the family evolve.

As well as being enjoyed on every level by the clients, the house has seen an influx of visitors since completion, including extended family. This speaks to the real value of the project: it has already proven its ability to extend the life of the family home into the future.

A house with tiles on it 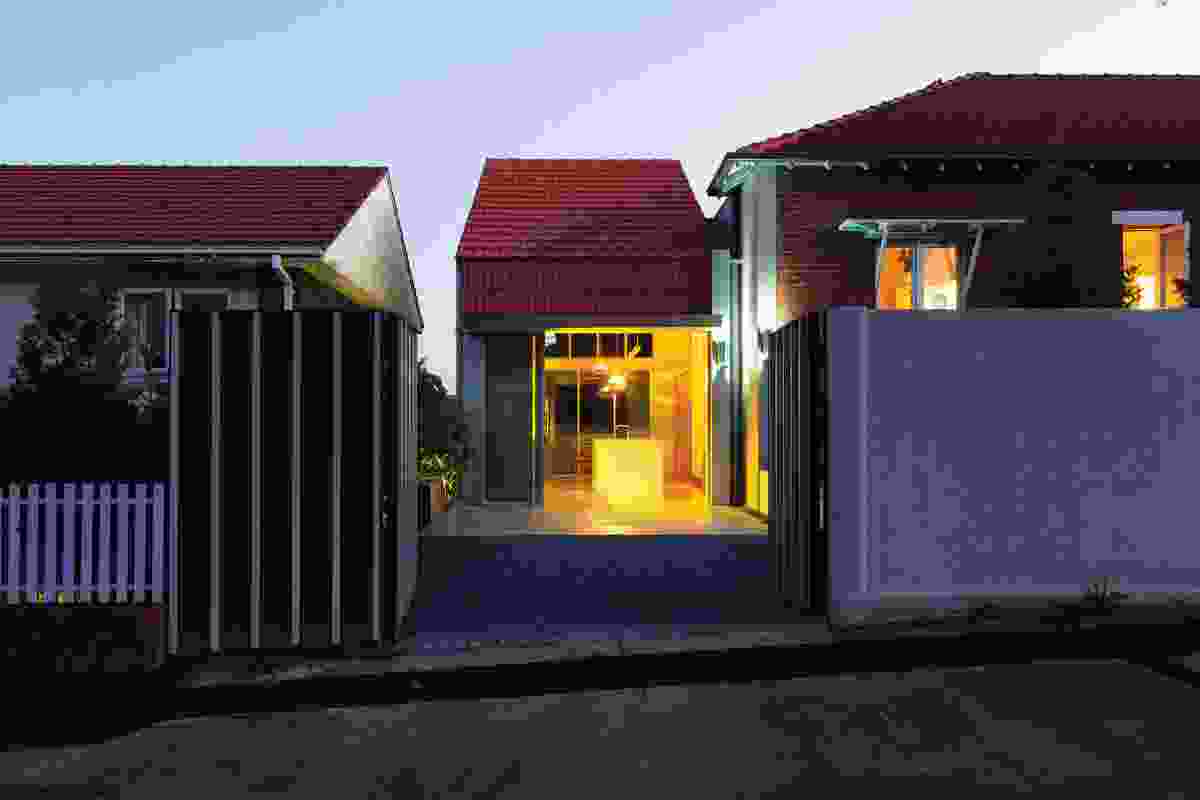 The extension is wrapped in terracotta roof tiles. 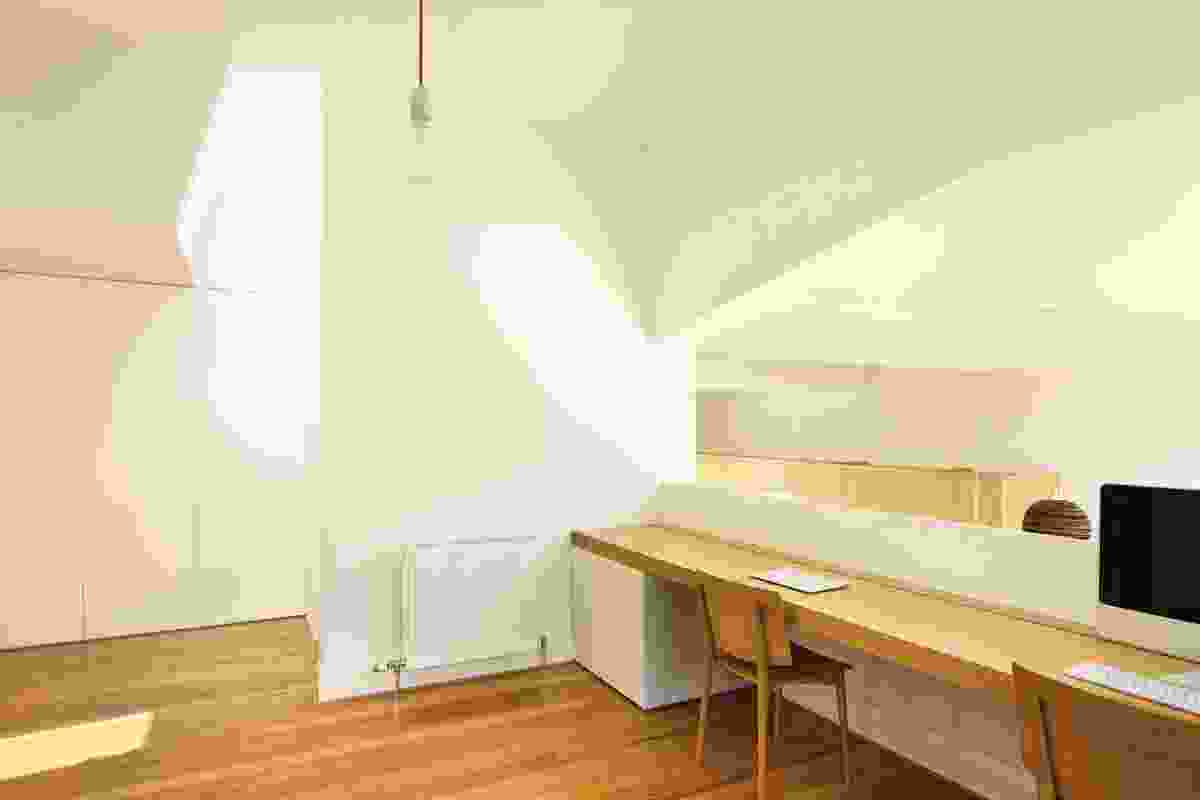 Work bench above the kitchen. 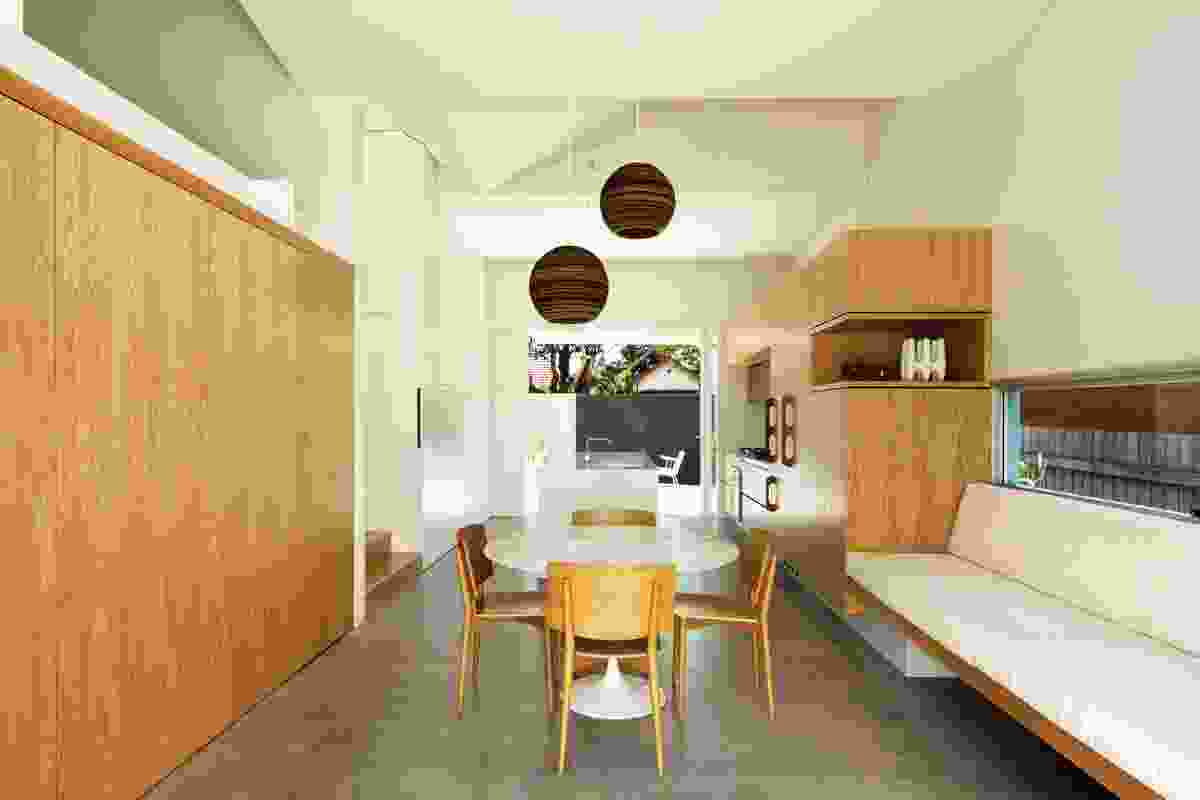 The kitchen opens at each end onto the garden, via bifold doors. 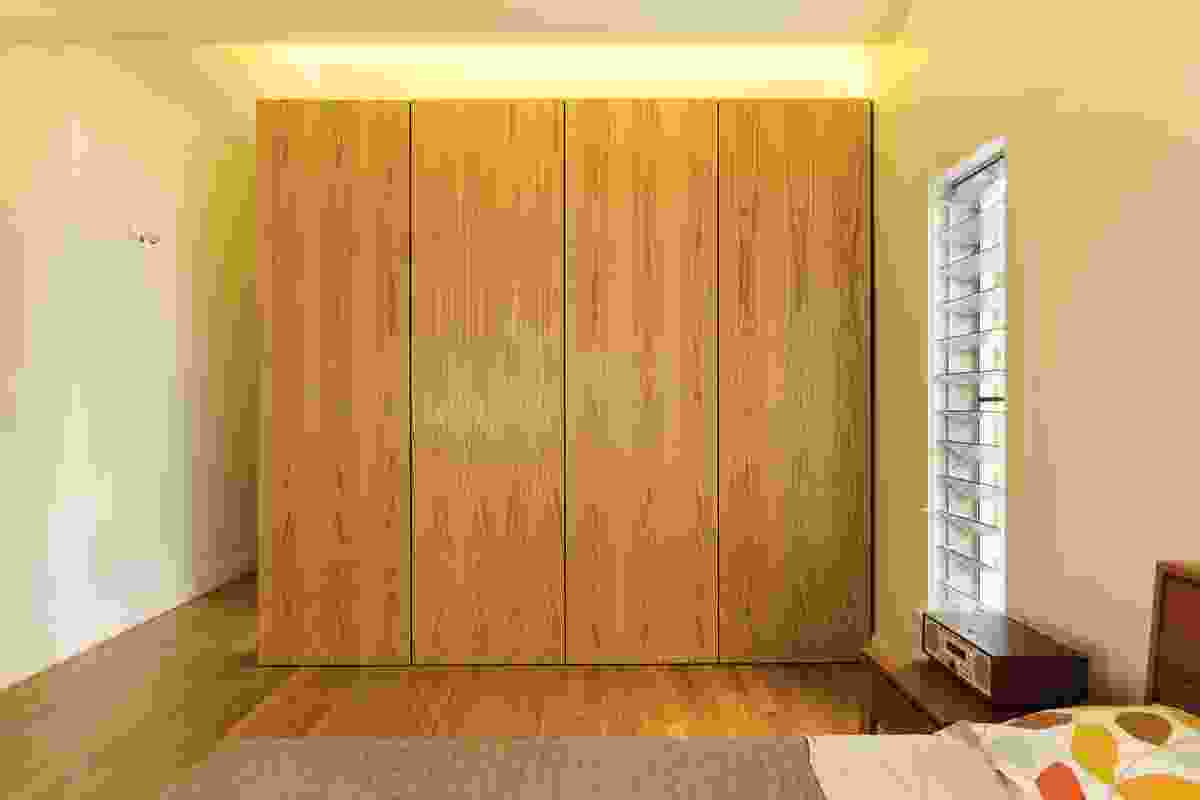 A former living area is now the main bedroom. 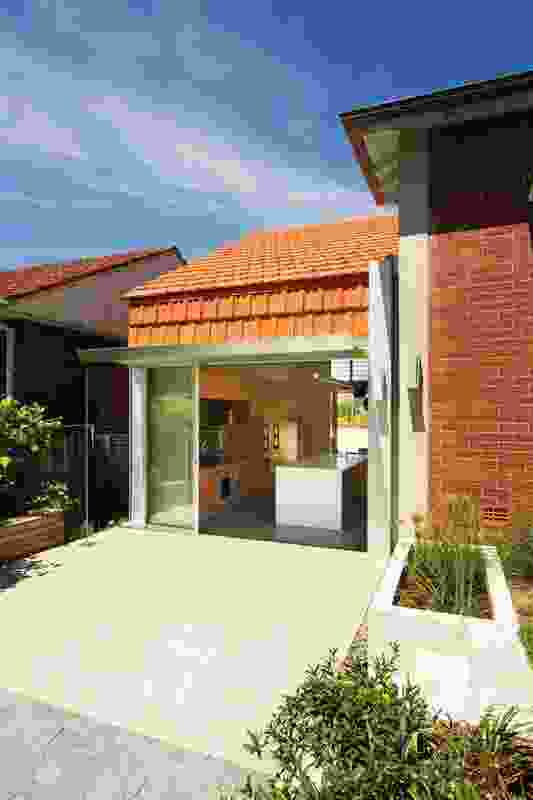 The junction between the old and new components of the house. 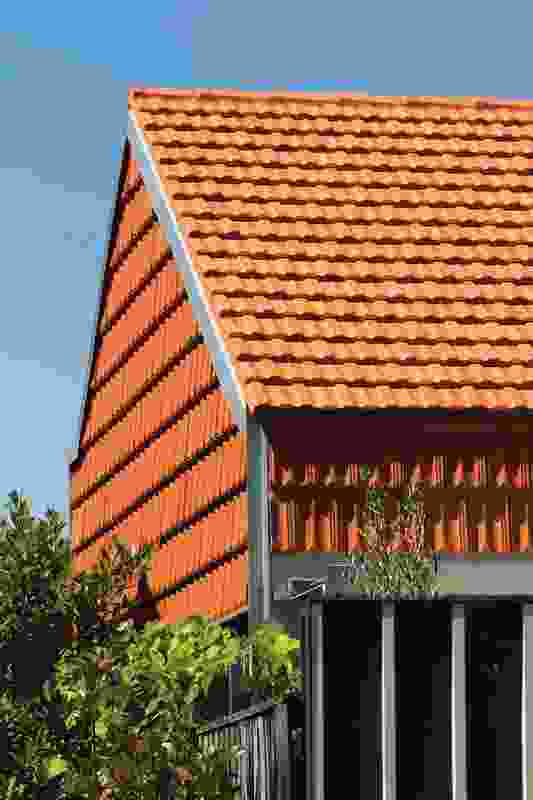 Terracotta tiling – a familiar palette used in an unusual way. 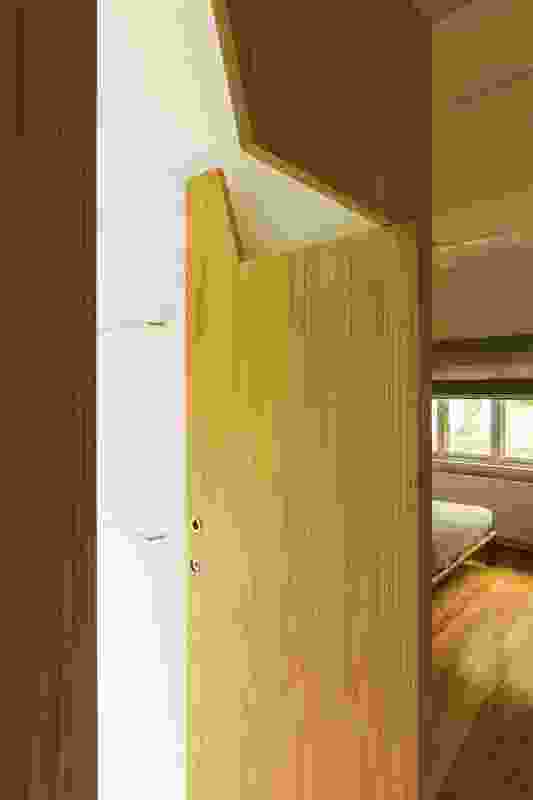 The main bedroom has a discreet “timber box” ensuite.