A new centre by Croxon Ramsay in Laurimar, Victoria, is a fulcrum for a new Melbourne housing estate.

Half an hour’s drive north of Melbourne, through a burgeoning column of production-line housing estates that cling to the arterial road, Croxon Ramsay has crafted a community centre at the heart of a new residential estate in the suburb of Laurimar.

The Laurimar Community Activity Centre’s central position within the estate was determined by developer Delfin Lend Lease’s desire to create a dense town centre and bring the community to this “high” street. It is surrounded by an associated primary school, playing ovals, a private childcare centre and a vacant block, on which it is planned a town hall will be built. These facilities coexist with three-storey, mixed-use buildings on zero-plot setbacks, all developed by Delfin Lend Lease. This high density increases amenity for residents while the atypically urban area significantly increases the sale values of surrounding houses. Importantly, this approach avoids the typical outcome in which less profitable community buildings end up on the estate perimeter, pushed out of the centre by more profitable enterprises. The community hub is also reflective of the undertaking of the City of Whittlesea and the developer to provide co-located services for children within new housing estates.

Croxon Ramsay’s first move towards this was to create a connection between the car park located to the west of the site (a resource that after lengthy coordination is now shared with an adjacent private entity) and the town square diagonally opposite it. Formalizing this axis created an internal street that recognizes the path most parents would take when dropping their little ones at the childcare centre before heading across the street for a coffee and some shopping. The axis also helps to define a division between the childcare centre on one side and the more public facilities –such as the maternal health centre, yoga room and private consultation rooms — on the other. The axis is notionally projected past the building’s deeply recessed entrance via a sculptural roof, which appears to be gathered at the building’s corner, about to leap into action. This sharp overhead element is offset at ground level by a gently curving brick wall and timber seat that is nestled into a budding vertical garden, which is just beginning to track a path up the woven wire mesh screen.

With this east-west axis bisecting the site, the rest of the building, in the words of the architects, “planned itself.” The child-care centre was placed to the north to allow access to plenty of carefully controlled northern light. The north-facing playgrounds are shielded acoustically and visually from the busy main street by the southern section of the building. This section includes the Maternal and Child Health Centre, which required spaces with high levels of privacy.

The health centre suited the southern location but presented the architects with some difficulties in that they needed to balance the requirement of privacy with their desire to create rich, engaging facades to the street. To this end, Croxon Ramsay has enlivened the streetscape by resisting the urge to fill the plan to the boundary, instead shaping the rooms to leave a series of deep triangular niches along an essentially and programmatically blank facade. Similarly, the eastern edge presented limited opportunity to insert clear glass windows due to privacy restrictions in relation to the child-care program housed inside. The architects responded to this by shaping and folding the roofing material down and over the brick facade to give extra life to the elevation.

Internally, Croxon Ramsay has inserted an intricately detailed, permeable wall as a partition, creating a buffer between the public corridor and the children’s rooms. This provides secure access to the child-care centre without severing it from the rest of the building. The wall is punctured with a multitude of openings: glazed windows at the lower level, breeze blocks for airflow at the higher level, and some crossed with vertical plywood blades, just big enough to encourage little limbs to explore but not big enough for the owners of those little limbs to escape through. The wall is also an integral element in the building’s environmentally sustainable credentials, providing thermal mass to absorb and release heat in concert with programmed night purging. This allows most of the centre to avoid using mechanical air treatment.

The selection of largely unfinished materials for this internal wall is indicative of the approach to materials throughout the building design. The architects have sampled then reinterpreted elements from surrounding houses, taking a familiar brick cladding in earthy hues then adding orange and green stripes. A similar tactic is put to use with the monumental roof and cladding form, where a more commercial Zincalume-coated Spandek has been used over the ubiquitous Woodland Grey Custom Orb. All this makes the building robust and yet familiar within Laurimar’s covenanted palette of warm, natural tones and naturally finished timbers and bricks.

A full appreciation of Croxon Ramsay’s intention for the Laurimar Community Activity Centre may still be a short while off due to the project’s rapidly evolving context, something the architects have taken into consideration when designing the building. The community centre will potentially connect directly to a proposed town hall that would fill the vacant block adjacent to the west of the site. Croxon Ramsay has aligned the centre’s central axis in such a way that it won’t be built out, locating an expendable service courtyard and open-ended hallway to allow for easy future connections. To the east of the site, over the street, more multi-storey apartment and retail buildings are planned; the centre’s current, somewhat oversized entry canopy will comfortably engage with this scale.

Despite the challenges to the ever-growing periphery of Melbourne, including its lack of transport infrastructure and greater distance from major services, the Laurimar Community Activity Centre signals a small movement towards an increased density or urban scale in one of the fastest-growing regions in Victoria. It is also an example of a successful public-private partnership, in this case between Delfin Lend Lease and state and local governments. Since getting the runs on the board with this project, Croxon Ramsay has been commissioned by the City of Whittlesea to design another community centre for a different estate. While a new set of site conditions will create different challenges for the architects, they will hopefully draw a similar response: an architectural symbol (realization?) of a newly formed community.

See an overview of Laurimar here. 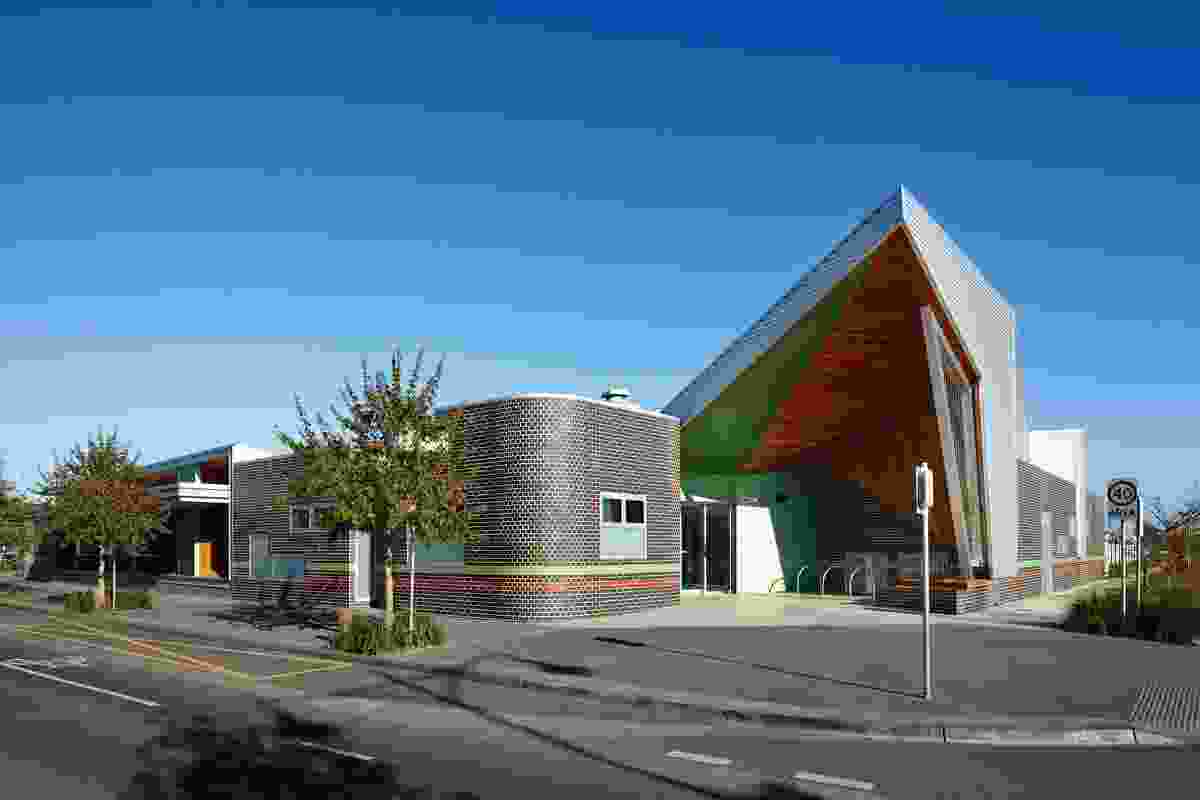 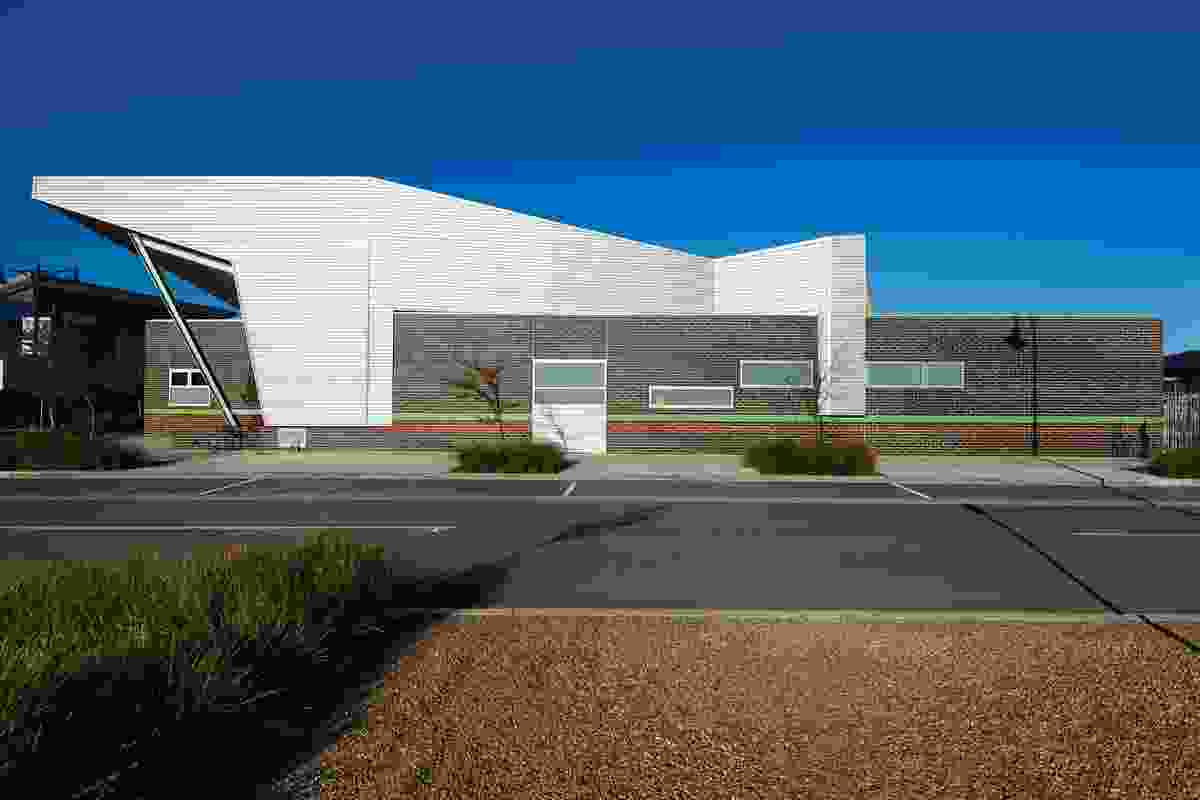 Orange and green stripes in the brickwork echoe the cladding of surrounding dwellings. 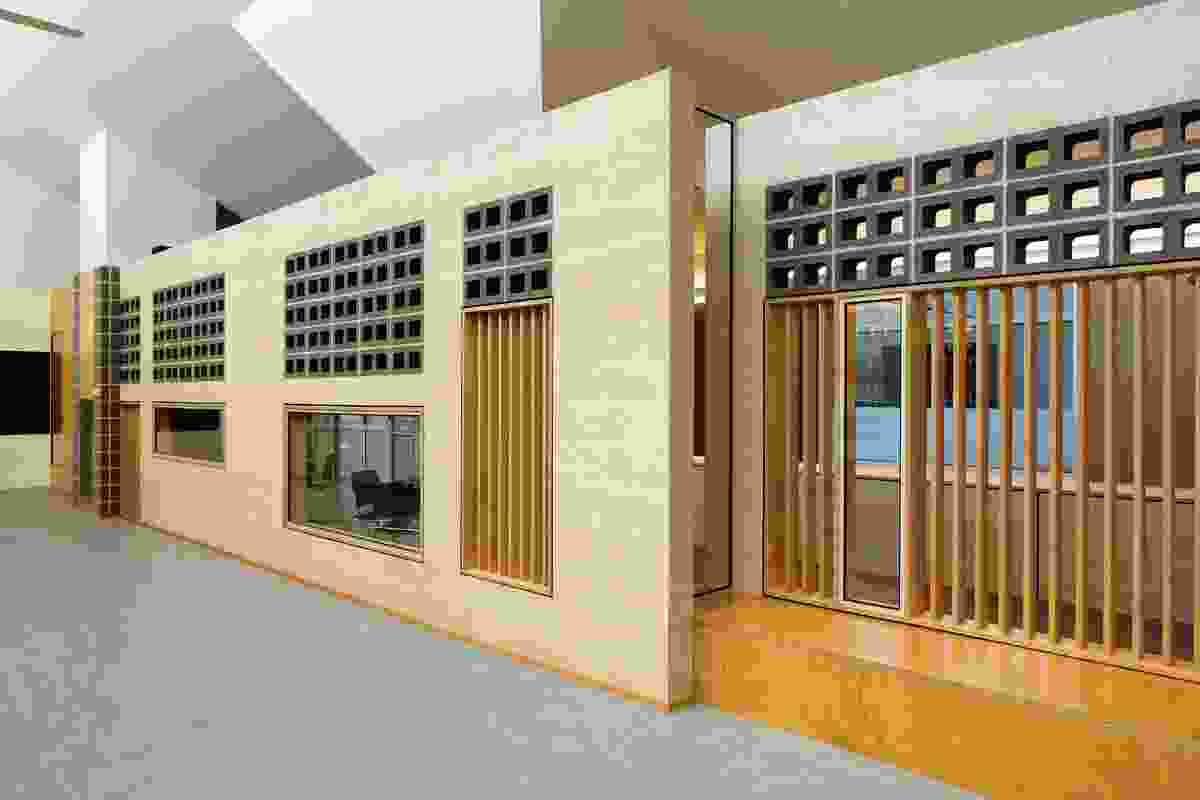 A permeable wall acts as a buffer between the corridor and the children’s room. 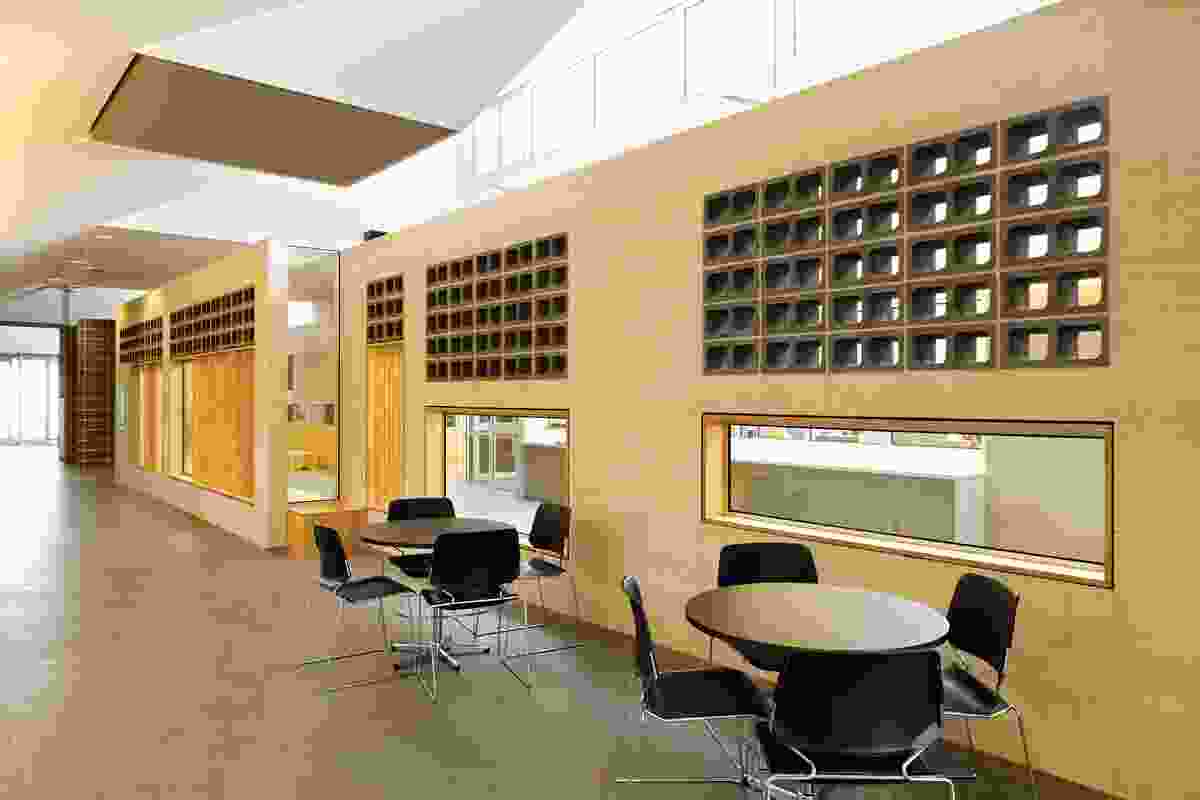 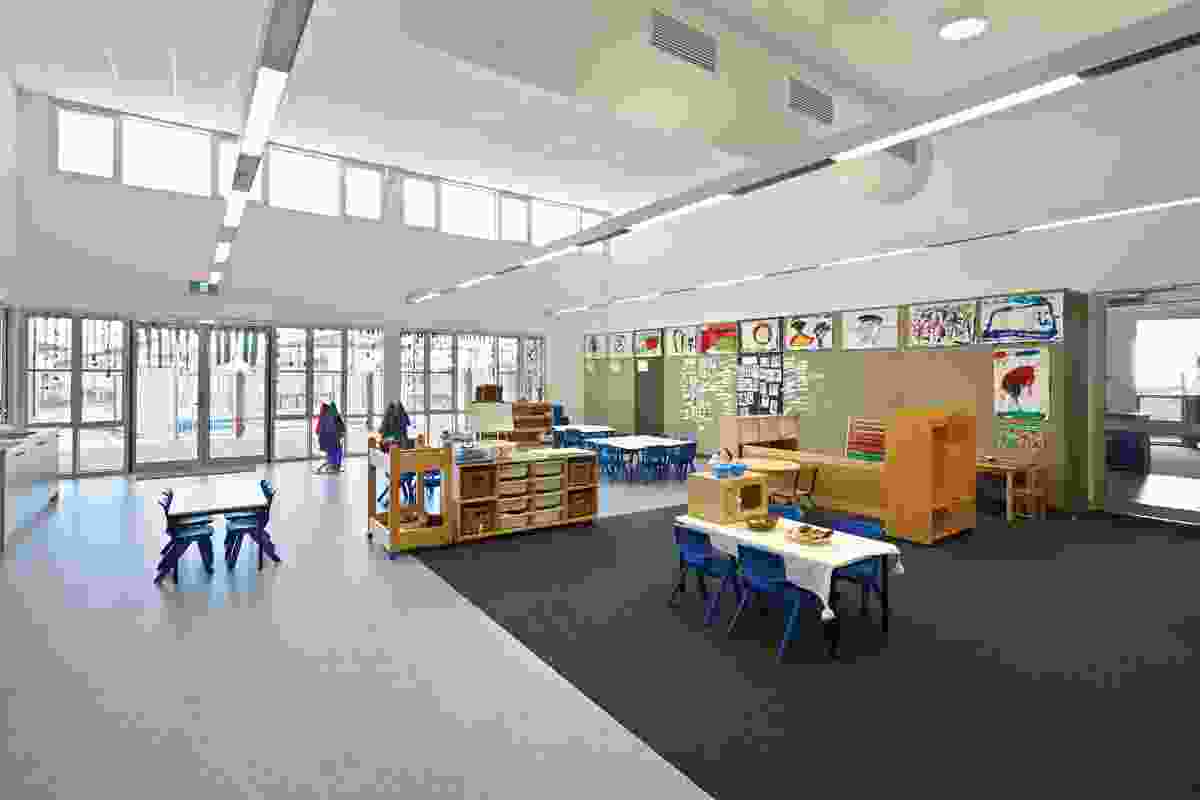 The child-care service assists young families, a key part of the local demographic. 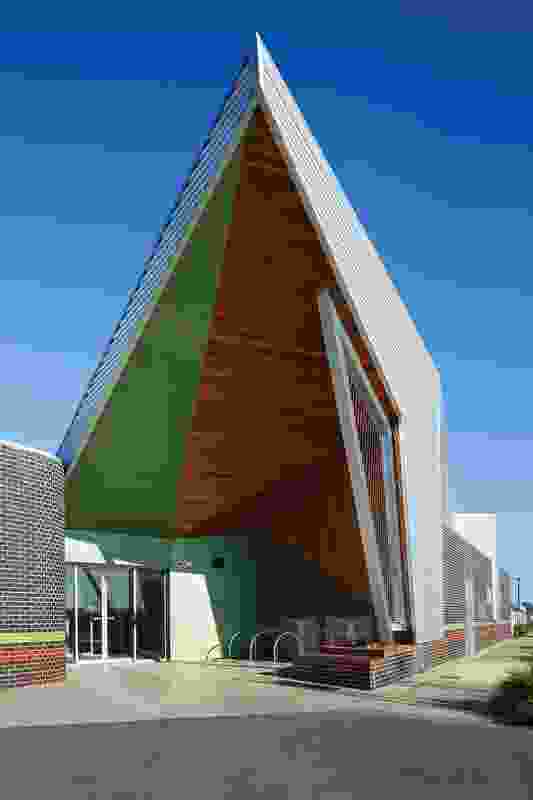 A sculptural roof heralds the centre as a pivotal place.