A story of migration, refuge and reconstruction: Elwood Talmud Torah

Viennese émigré Kurt Popper was a remarkable and prolific architect who helped introduce European modernism to the design of Australia’s places of worship.

On a plane tree-lined suburban street not far from Melbourne’s St Kilda Botanical Gardens stands a physical reminder of the turbulence and horror of world events in the twentieth century. Themes of migration, refuge and the rebuilding of community by European Jews find material expression in the design of the Elwood Talmud Torah, which reveals influences of European architectural modernism. The synagogue was designed by Viennese émigré architect Kurt Popper between 1953 and 1957, and later expanded, then substantially remodelled, in 1972–73. Today the monolithic yet meticulous peach-blond brick panels of the synagogue stand amid Federation houses and six-pack apartments. Faded azure ceramic tiles surround an exuberant copper relief Star of David on the facade atop a sunburst aureole by another Viennese émigré, sculptor Karl Duldig.

Founded in the 1930s by European Jews fleeing anti-Semitism, the Elwood Talmud Torah congregation, like the entire Melbourne Jewish population, grew with the large post-Holocaust immigration of the 1940s and 1950s. It is emblematic of the many postwar Jewish communities in which European life was reformulated for suburban Melbourne. The vision was of a community that was integrated, but not assimilated, into the local culture, and the synagogue sits within a larger campus of community facilities including a kindergarten, school and social hall. As with so many postwar Australian synagogues, the congregation first met in a private home, then moved to a rental property, later purchasing land with a house and, finally, commencing building.

Popper was architect for the entire Talmud Torah campus from 1953 to 1981. He was one of the remarkable European modernists who arrived in Melbourne just prior to World War II. He studied in Austria at the Vienna School of Arts and Crafts and the Academy of Fine Arts Vienna –an architectural education vastly different to that of his Australian contemporaries. Vienna was one of the crucibles of modernism and Popper’s education – under influential teachers Oskar Strnad and Clemens Holzmeister – placed him at the edges of this epoch-making culture. Strnad collaborated with Josef Hoffmann and Peter Behrens, worked as an academic in partnership with Josef Frank and Oskar Wlach, and designed for both the Viennese Werkbundsiedlung housing project and the ambitious Viennese social housing program. Strnad was also a theatre and film set designer of international repute and Popper’s first professional commissions designing theatre sets were gained due to his support. Holzmeister, Popper’s other significant teacher, went on to be one of Austria’s leading postwar architects and the brick monumentality of his work was
a clear influence on Popper throughout the latter’s career.

The Nazis’ violent anti-Semitism led to more than half the Jewish population of Austria emigrating by mid-1938. Hundreds of Jewish architects from central Europe dispersed across the globe at this time, soon disseminating European architectural ideas in their new locales. Popper arrived in Melbourne in 1940 after a meandering journey. First working for the Allied Works Council and then the Housing Commission of Victoria, he commenced private practice in 1946. Commissions for the Jewish community dominated Popper’s career. In addition to the scores of flats and houses he designed for Jewish clients, Popper was the most prolific designer of Jewish community infrastructure in Melbourne – designing several synagogues, schools and kindergartens. Of Popper’s community buildings the Elwood Talmud Torah is the finest, and his personal favourite.

The Jewish community of Melbourne and its architecture were radically altered by the arrival of Jews from the metropolises of Vienna, Berlin and Prague in the 1930s. Historicist styles had previously prevailed. The new émigrés were to dominate Jewish community building in the coming decades, all of it in the new modern style. The earliest building commissioned by an émigré-dominated congregation was the Temple Beth Israel, St Kilda, by Joseph Plottel, built from 1937. It was one of the very first places of worship in Australia to be built in the modern idiom. Unlike the Christian denominations, there was no battle of the styles within the Jewish community, but rather an immediate embrace of modernist architecture.

Prioritizing education over a purpose-built place for worship, the Elwood Talmud Torah congregation first constructed the Leo Frances Memorial Kindergarten and their school Moriah College in 1956. Only after these were completed did the building of a new synagogue commence. The Elwood Talmud Torah comprised a large sanctuary, modest women’s gallery, beth midrash (study hall), kitchen, offices, lobby and porch. The Elwood Talmud Torah opened at the end of 1957, and was clearly influenced by Erich Mendelsohn’s 1946–50 synagogue B’nai Amoona in St Louis, Missouri, with its similarly raked ceiling that encompassed a main sanctuary and second-storey women’s gallery, as well as its cream brick and white detailing.

The synagogue was one of the earliest commissions for the soon-to-be-prolific L. U. Simon Builders. The furniture was made by Peter Danby. The aron kodesh and bimah (ritual timber structures in the interior of the synagogue) were donated by the forward-thinking property developer of Frederick Romberg’s Hilstan apartment complex, Stanley Korman and his brother Hillel.

The synagogue was undersized from its inception, struggling to accommodate increasing numbers of women in the postwar period, and so another women’s gallery was added in 1960. Postwar migration swelled the congregation and necessitated a major remodelling with increased seating for both male and female congregants in 1972–73. This resulted in the building standing today, with colourful maroon and gold-hued stained-glass windows by Adele Shaw and the Duldig Star of David sculpture. The remodelling radically shifted the aesthetics of the synagogue. The blank monolithic brick massing suggests the influence of Holzmeister’s church buildings and is also reminiscent of Louis Kahn’s first commission, the Ahavath Israel Synagogue in Philadelphia (1935–37) and the brick monumentality of Kahn’s later work, such as the First Unitarian Church of Rochester (1969).

Architecturally, the Elwood Talmud Torah is best understood within the context of European modernism and American Jewish architecture, and clearly sits within a larger Jewish diaspora architecture. Popper, like most of the Jewish architects that were driven out of Europe and resettled around the world, was steeped in this milieu. The émigré architects absorbed influences from their new homes – as well as continuing developments in architecture – yet the dominant influences on their work always came from the architecture of their origin countries, other émigrés, the work of prominent postwar Jewish American architects such as Kahn and Percival Goodman, and, in the case of synagogue design, illustrious designers of synagogues such as Walter Gropius, Philip Johnson, Frank Lloyd Wright, Marcel Breuer and Minoru Yamasaki.

The significance of the Elwood Talmud Torah is threefold: as a rare manifestation of the more complex regional currents of Viennese modernism in Australia; as a fine example of transnational diasporic synagogue design; and as the material expression of the post-Holocaust rebuilding of Jewish communities.

– Catherine Townsend is a PhD candidate in the Faculty of Architecture, Building and Planning at the University of Melbourne.

A story of migration, refuge and reconstruction: Elwood Talmud Torah 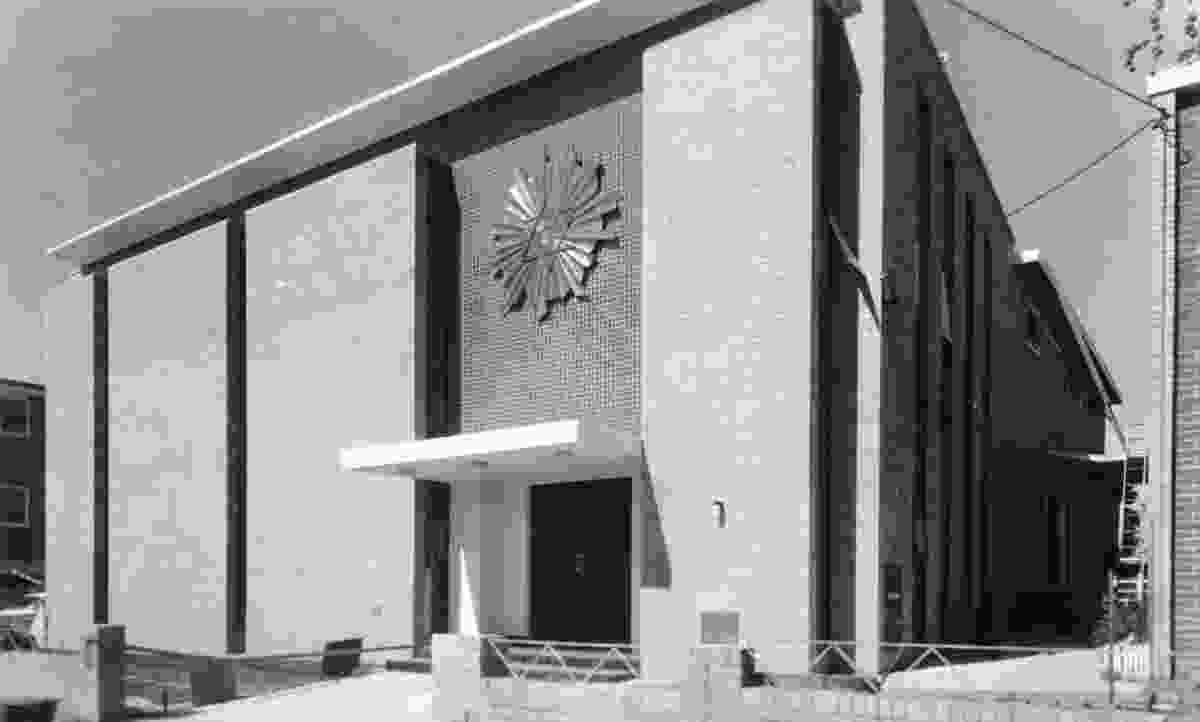 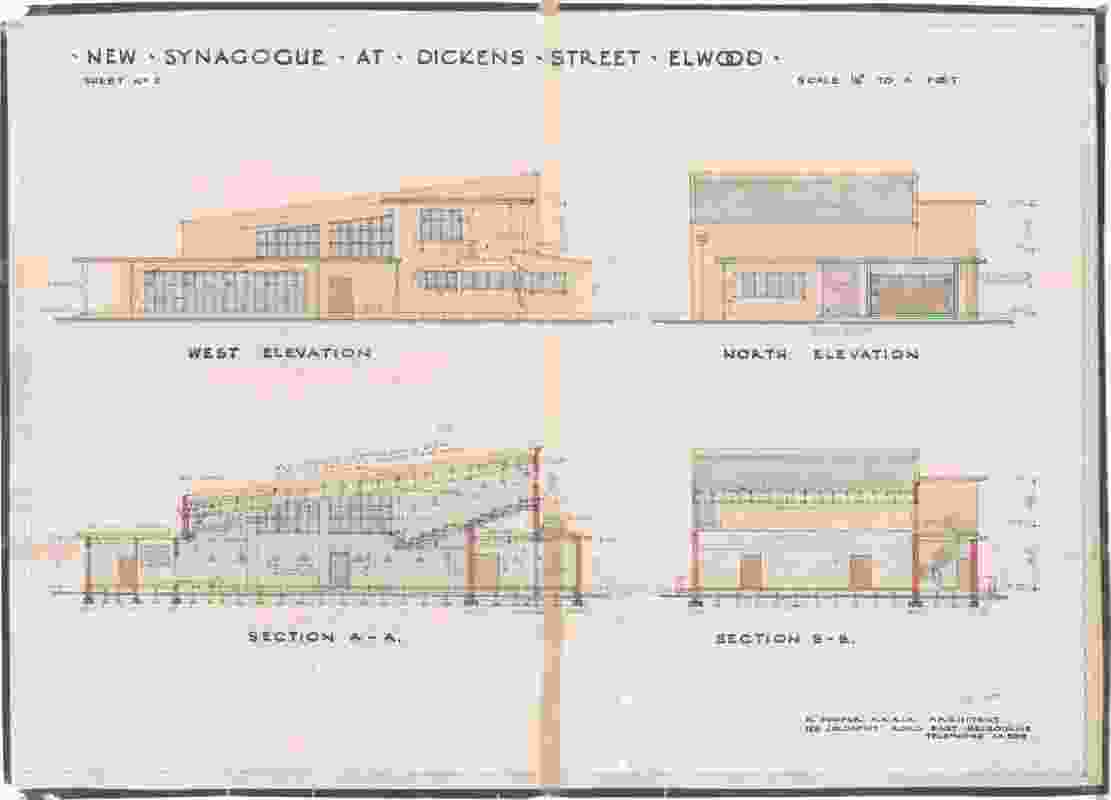 Elevations of the Elwood Talmud Torah by Kurt Popper, c. 1956. 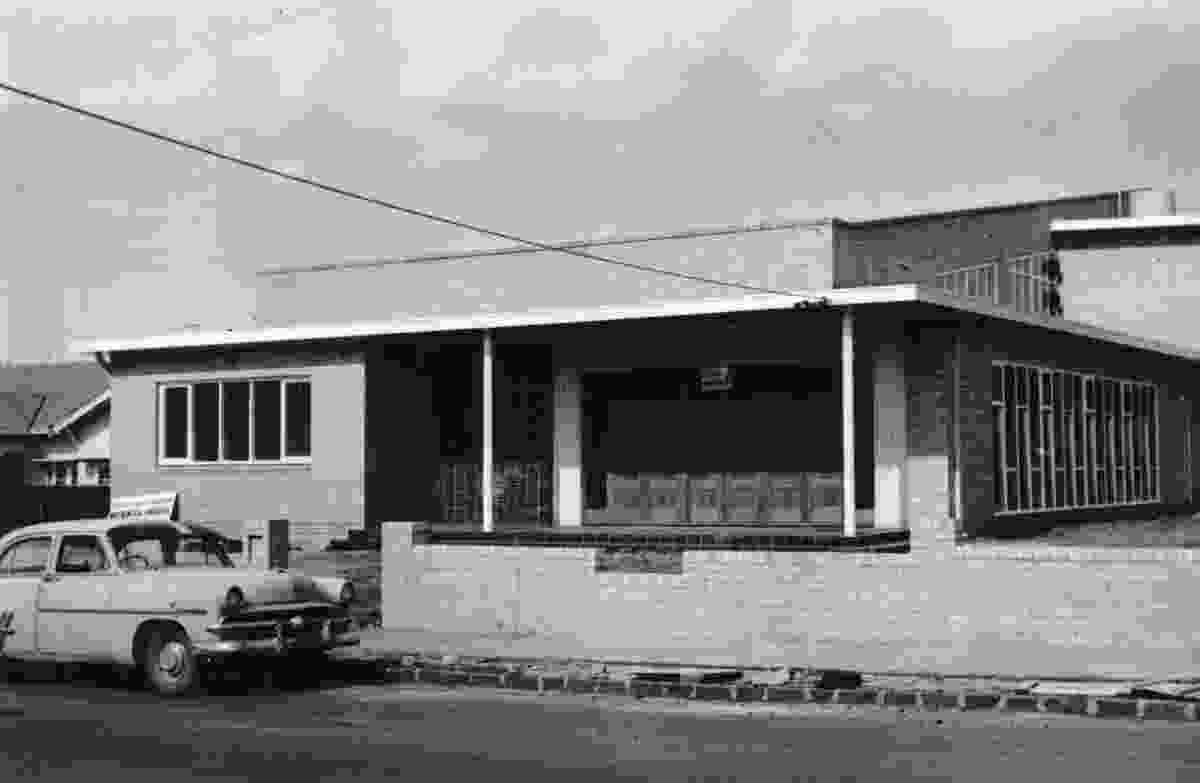 The original Elwood Talmud Torah by Kurt Popper, photographed in 1957. Popper, who had arrived in Melbourne from Vienna in 1940, was one of many émigrés who introduced the Jewish Australian community to Viennese modernism. 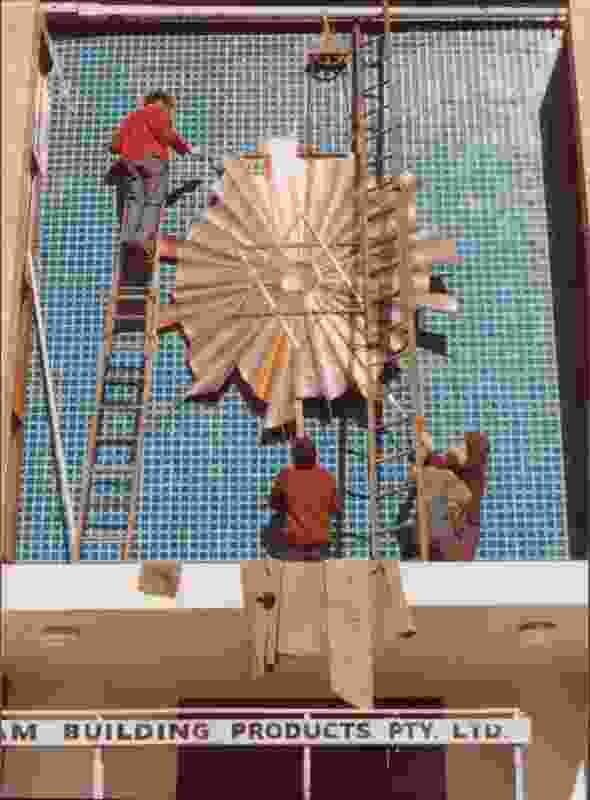 A copper relief Star of David atop a sunburst aureole, designed by Karl Duldig, is installed on the facade, c. 1973.