The conversion of an inner-Sydney community centre by Collins and Turner brings Weave and Headspace under the one (green) roof.

For the past fifteen years, Weave (formerly South Sydney Youth Services) has operated from a converted toilet block overlooking the skate park at Waterloo Oval. Conversion is a misnomer; until recently, the only real alterations to the building had been the removal of the toilets.

Weave (Working to Educate, Advocate and Empower) was formed in the 1970s by a group of parents who were concerned about the welfare of local children. By the mid 2000s the organization had over thirty employees and was providing a range of services including counselling and health and education programs to young people, many of whom are Aboriginal or Torres Strait Islander.

The City of Sydney has become well known for its enlightened upgrades to inner-city public spaces. It was in this context in 2008 that the city held a small, invitation-only competition to convert the building (this time in earnest) into a contemporary workplace for Weave and Headspace, the national youth mental health organization.

Other suggestions were that it be vandal-proof and that entrants explore ideas for a green roof.

To minimize the impact on the park, the brief required that there be little or no increase in the building footprint. Other suggestions were that it be vandal-proof and that entrants explore ideas for a green roof as a means to address the outlook for surrounding high-rise residential buildings. The initial budget for the project was small but some additional funding was provided later through the Australian Government’s stimulus package.

Collins and Turner, one of three invited firms, submitted a simple scheme that solved the circulation and area limitations of the brief by creating a central courtyard around which the various program elements sat in pinwheel form. This eradicated the need for corridors. Slight area increases were proposed through pop-outs in the existing brick walls and the whole building was clad with steel mesh panels intended to act as a trellis. In addition to this scheme, Collins and Turner submitted several pages of sketches covering design options they had explored during the competition process. One of these described a spiky trellis reaching outward and upward from the existing building like a crown. While this had been a favourite within the studio, it had been dropped due to concerns that it might appear extravagant. However, the City of Sydney gave the firm a couple of days to provide more details. Over the weekend, a model was made using sewing needles, thread and sanding blocks. Collins and Turner won the project.

The resulting building retains the plan and mesh trellis walls of the competition scheme, augmented with a dramatic folded pergola. The pergola structure sits independently of the building; in fact, it has been designed so that either the building or the structure can be removed or relocated in the future, without one affecting the other. The structure is visually complex but it is, in effect, a series of four Hills hoist-type elements, each slightly out of kilter and connected to the other. In addition to providing the suburb of Waterloo with its first dramatic cantilever, or rather, four of them (surely a good thing), the pergola makes it possible for Weave to use the roof space. A utilitarian stair formed from steel drainage gratings connects the ground-floor lobby to the roof terrace, where the form of the pergola and the planting beds provide nooks for informal meetings and discussions. This doubles the usable space of the centre and provides a level of privacy that the lower floor alone would not have allowed.

Downstairs the pinwheel arrangement works beautifully, with the various functions – lobby, kitchen, workspace – framing a small courtyard with timber sets for paving and a single red-leafed tree. The brick walls of the old block have been retained where possible and painted white. New concrete blade walls, forming the “pop-outs” in plan, also support a post-tensioned slab above. This means no further columns are required internally. Along with the white walls and galvanized steel structure, dark timber and metallic grey joinery provide a quiet but robust background. Walls of magnetic and pin board surfaces foretell a future filled with the visible ephemera of a busy and passionate organization.

It is a far and refreshing cry from the many sterile “wash down” environments, or from their flip side, the “youth-branded” spaces of imported graffiti and wacky graphics.

Unlike so many community- and health-related interiors, especially those for young people, this is a space that respects the intelligence and humanity of the people who will use it. It is a far and refreshing cry from the many sterile “wash down” environments, or from their flip side, the “youth-branded” spaces of imported graffiti and wacky graphics.

Externally the landscaping, by Terragram, reads as an inversion of the flying pergola – the same galvanized material and triangulated forms, but this time in sheets with an abstract patterning of round punctures. These slip and slide around the building base, partially submerging it and forming earth-retaining surfaces. The chubby leaves and pink flowers of pigface succulents wriggle through the perforations.

Collins and Turner cite the Snowdon Aviary at London Zoo as an influence for the project. Formally this is clear, but one of the delights of this project is its perverse heaviness. Although the architects started with a lightweight tension structure in mind, the (probably reasonable) fear that the structure would prove too tantalizing not to be climbed meant that it had to be designed for crowd loading. The result is almost gothic, both heavy and light. The steel work detailing of the flying cantilevers is wonderfully unselfconscious and chunky; the Roads and Traffic Authority (RTA) gone ballroom dancing, or perhaps I should say skateboarding. It very much is a crown: heavy, elaborate, decorative, symbolic. Over, through and around it the bright green tendrils of climbing plants are already taking over, softening and blurring the building’s sharp edges. Jewels in the form of hazard-orange flowers contribute to the “RTA on an outing” flavour.

Another reference the architects make is to the work of John Krubsack, an early-twentieth-century American naturalist who managed to grow a chair from a tree. The new building for Weave has something of this quality; though formerly alien, it seems to have grown from its environment, residing with a joyful and uncompromised integrity in the space of its unprepossessing beginnings. 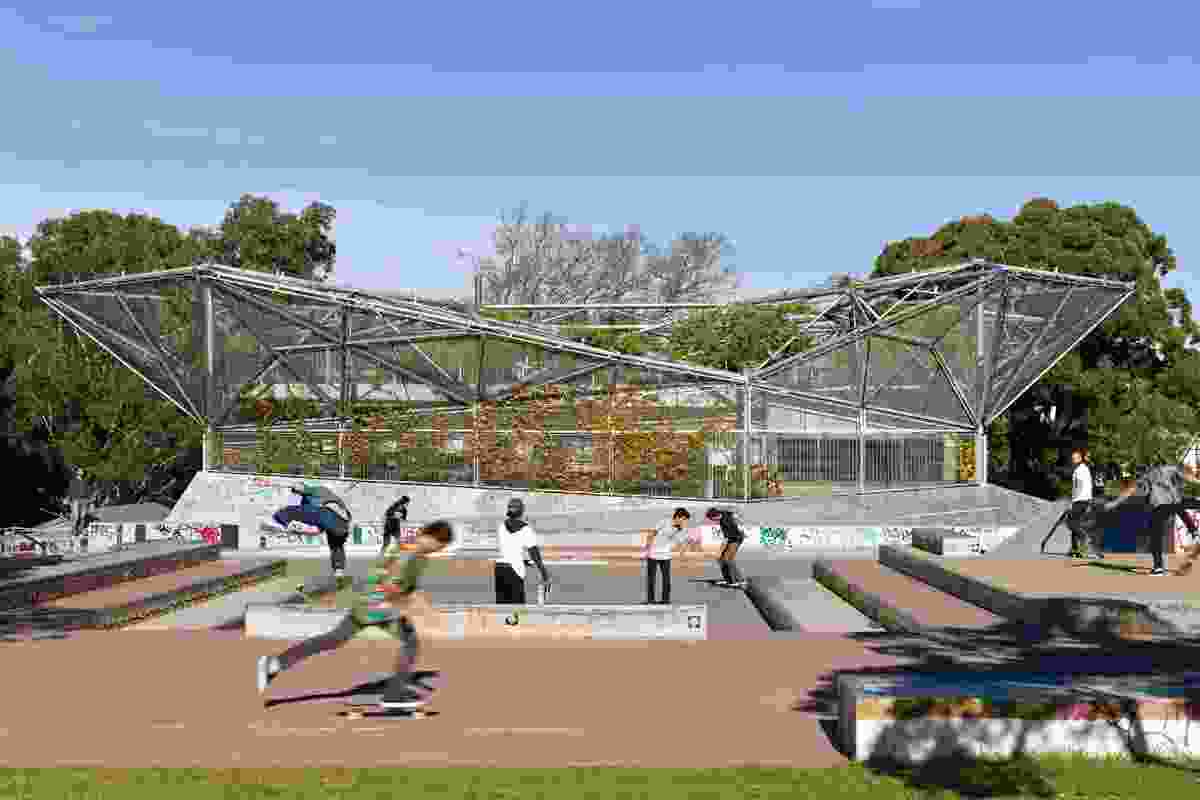 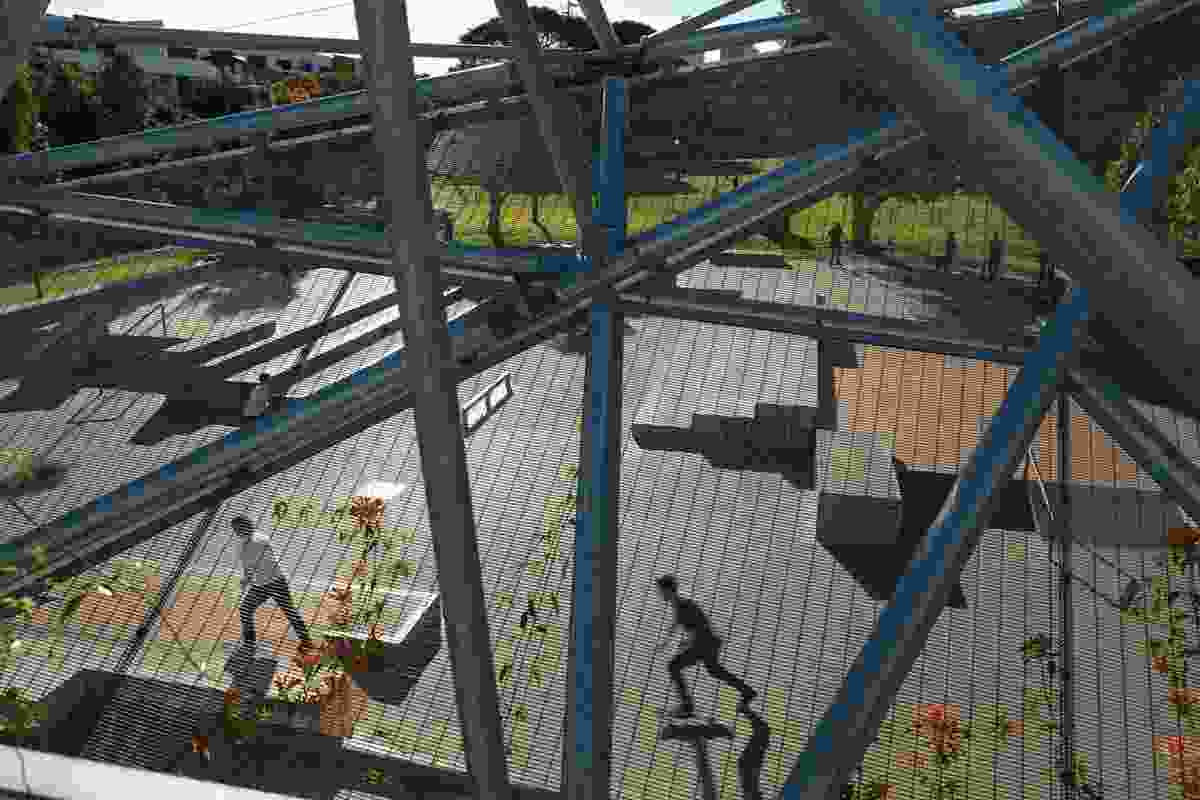 The pergola is made of four Hills hoist-type elements. 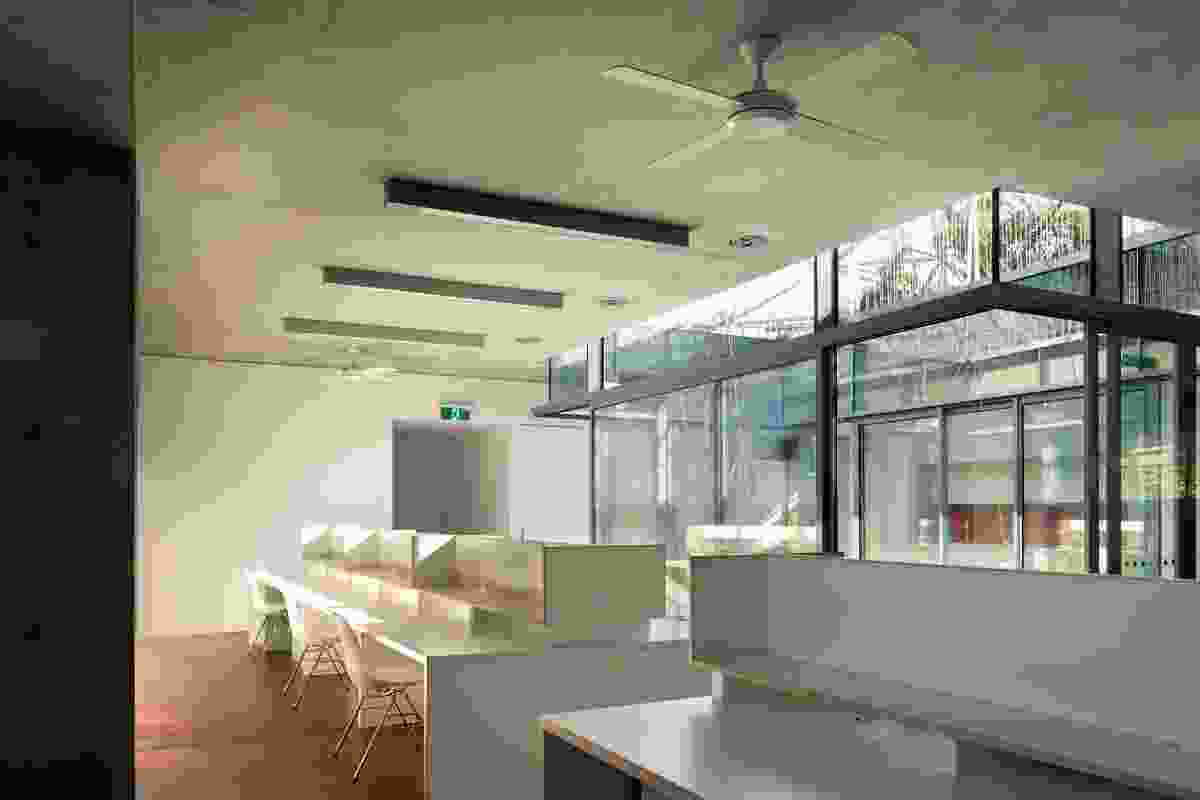 Original brickwork from the toilet block has been painted white.

The pergola creates diverse meeting spaces on the roof terrace. 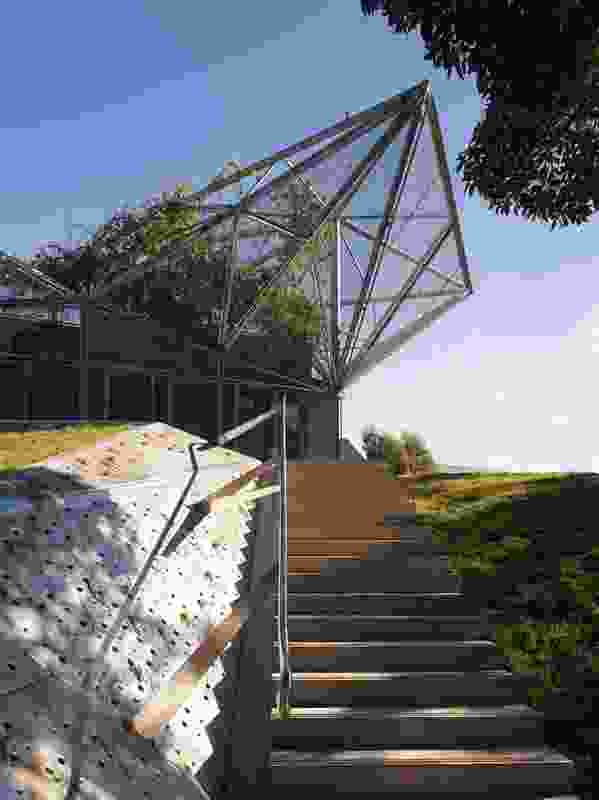 The pointed trellis of the Weave Youth Family Community Centre. 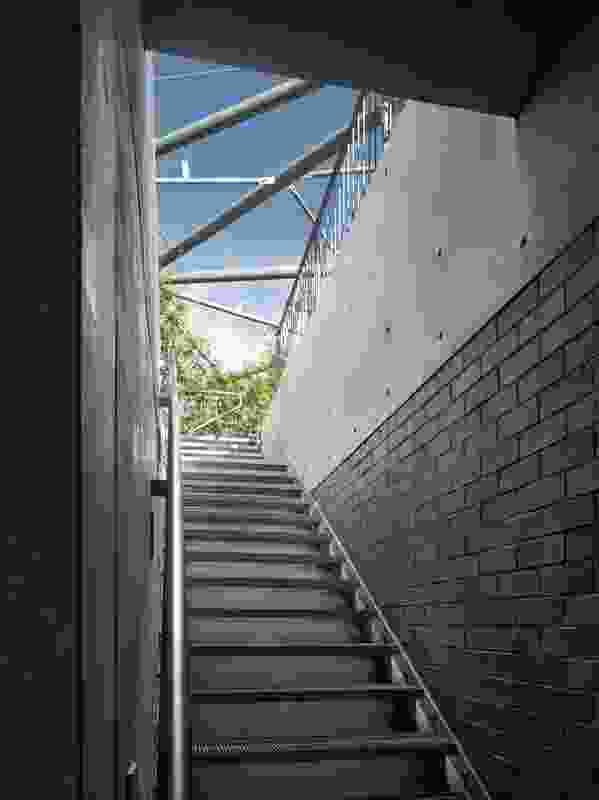 Steel drainage gratings emphasize the utilitarian nature of the stairs. 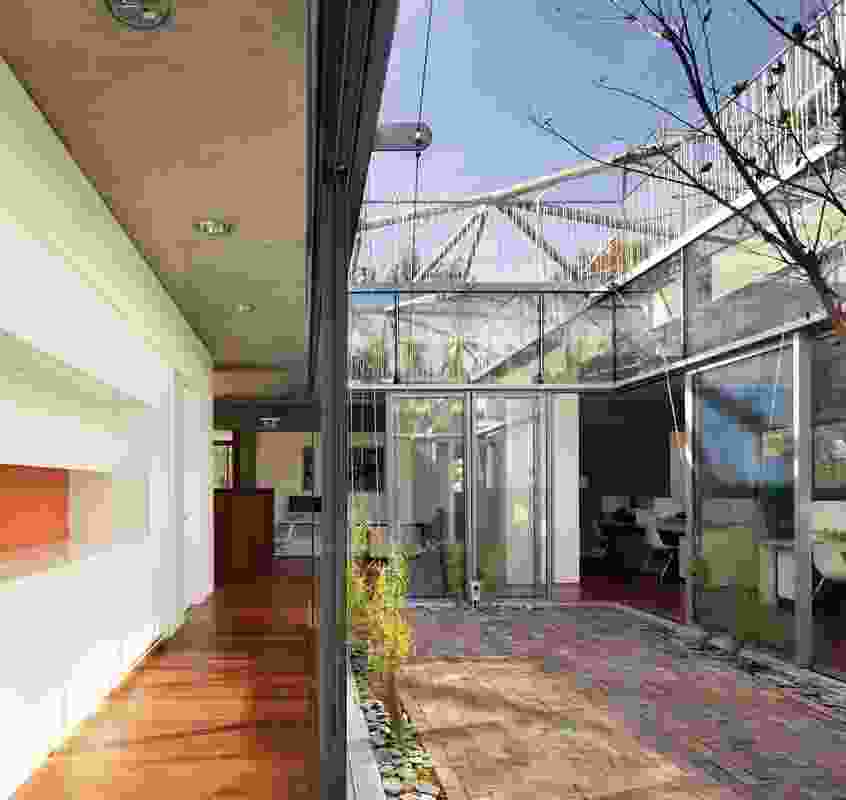 The program pivots around a central courtyard. 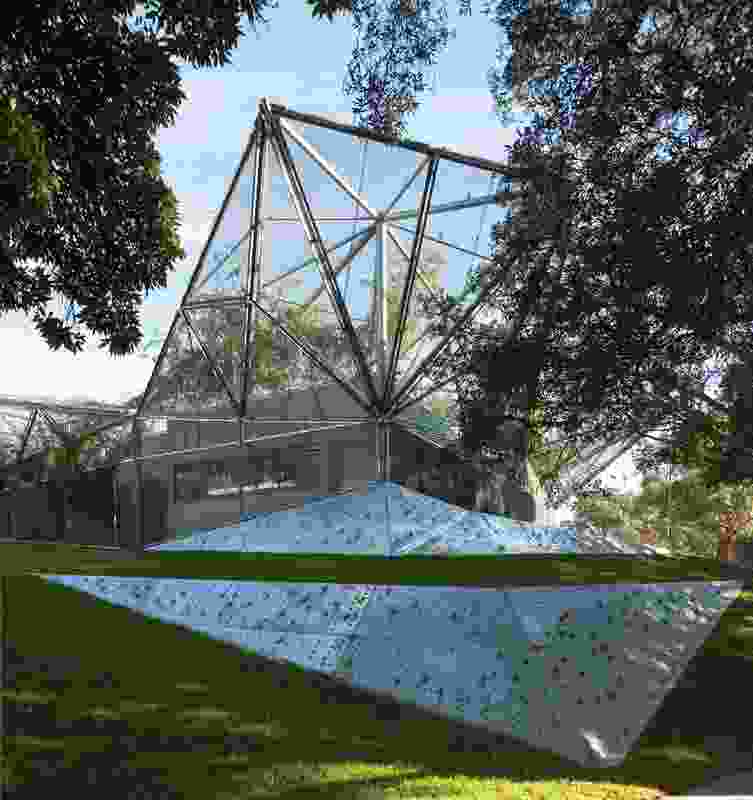 Perforations in the retainers allow for plants to emerge.