This deliberately restrained addition to a Victorian terrace by Clare Cousins Architects – which replaces an oversized faux period structure – revolves around a central courtyard to create a verdant haven in Melbourne’s inner north.

The crisp geometry of the rear facade is reinforced in the use of the non-traditional stack bond brick pattern.

Standing in the backyard of Clare Cousins Architects’ Garden Room House on a sunny summer’s day, you could easily feel as if you’re in subtropical Queensland. The white-brick rear elevation gleams against a backdrop of a cloudless mid-afternoon sky, with the sun’s rays ricocheting off the pool’s surface. But this is inner-suburban Fitzroy North in Melbourne. The house is surrounded by heritage terraces and the odd Edwardian mansion.

The new addition is single level and smaller than the previous. It continues the central corridor of the original house, leaving front rooms largely intact.

The original front of the house – a double-fronted heritage Victorian – faces onto Edinburgh Gardens, a large park within a tightly gridded urban setting. In some ways, Garden Room House is its own verdant haven in one of the most sought-after pockets of Melbourne. It uses its large but hemmed-in site to its advantage, creating a close relationship between the garden and the dwelling.

Clare Cousins Architects designed an addition to the original four-room Victorian that replaces an oversized double-storey faux period structure built in the 1980s. The new addition is single level and smaller than the previous. It continues the central corridor of the original house, leaving front rooms largely intact, albeit with a series of small interventions such as a new ensuite and a vivid Victorian blue powder room. The sight line from the front door through the new addition terminates at a wall, like a fullstop at the end of a sentence. But the variegated light and shadows on the surfaces hint at a continuing narrative.

In the backyard, the ground plane steps up dramatically. The rise from the front of the site to the back is two metres. The architects created a series of brick plinths and stairs that traverse the landscape. “Our strategy was to help gently navigate the topography of the site and also create opportunities for perching and resting,” says architect Clare Cousins.

The topography of the landscape is mimicked in the rear facade’s stepped rectilinear form. Its crisp geometry is reinforced in the use of the stack bond brick pattern. “We wanted to reference the orthogonal shape of the back elevation rather than using traditional brick bond,” says Clare. Behind this stepped facade, a raking ceiling over the kitchen and dining area creates contrast against the adjacent, more intimate lounge area.

Back inside, the new addition is arranged like an extrapolation of a four-room Victorian house, with zones rather than rooms. From the central spine, four new zones branch out: a lounge area, a kitchen and dining area, two children’s bedrooms behind a wall of oak timber panelling, and a courtyard or garden room that lends this house its name. The insertion of the courtyard erodes what would otherwise be a typical Victorian, cellular arrangement.

Although the Victorian influence can be detected in the home’s DNA, the character of the home is decidedly un-Victorian. The ceiling in the lounge area is lowered, but with the floor-to-ceiling windows orientated toward the northern sun, it creates a warm, light interior in contrast to the rooms of the original house. The round column at the corner is an often-used structural device whose lineage can be traced to Mies van der Rohe’s Barcelona Pavilion.

The courtyard is the keystone that makes the elements of the house coalesce, or as the architects describe, “it acts as a centralized lung to ventilate the house.” Just like an internal room, it has contained edges defined by a brickwall threshold and the house that surrounds it. The barbecue structure is distinctly fireplace-like. A raised terracotta brick ledge between inside and outside doubles as bench seating around an outdoor dining table. At the north-eastern end, an extended eave creates an undercover area for seating. “I do love a generous eave,” says Clare. “There’s something practical about being able to leave shoes [outside] or sit out here undercover, but still really feel like you’re outside.”

The garden room also provides a visual connection all the way through the rear of the house into the backyard. On the opposite side to the lounge is a study for one of the owners, who is a writer. From her desk, she can look through the courtyard and lounge room and supervise the children playing in the backyard. In fact, wherever you look in this house, there is a view to the greenery outside. This is a deliberate strategy to make the addition feel larger than it is, despite its reduced size comparative to its predecessor.

“For us, there is always consideration of how to draw the occupant’s eye out and give a sense of being immersed in landscape,” says Clare. “Even when we’re building in close proximity to boundary walls or fences, creating a garden vista pulls your eye out. These internal spaces aren’t huge. But they borrow from the space outside.” 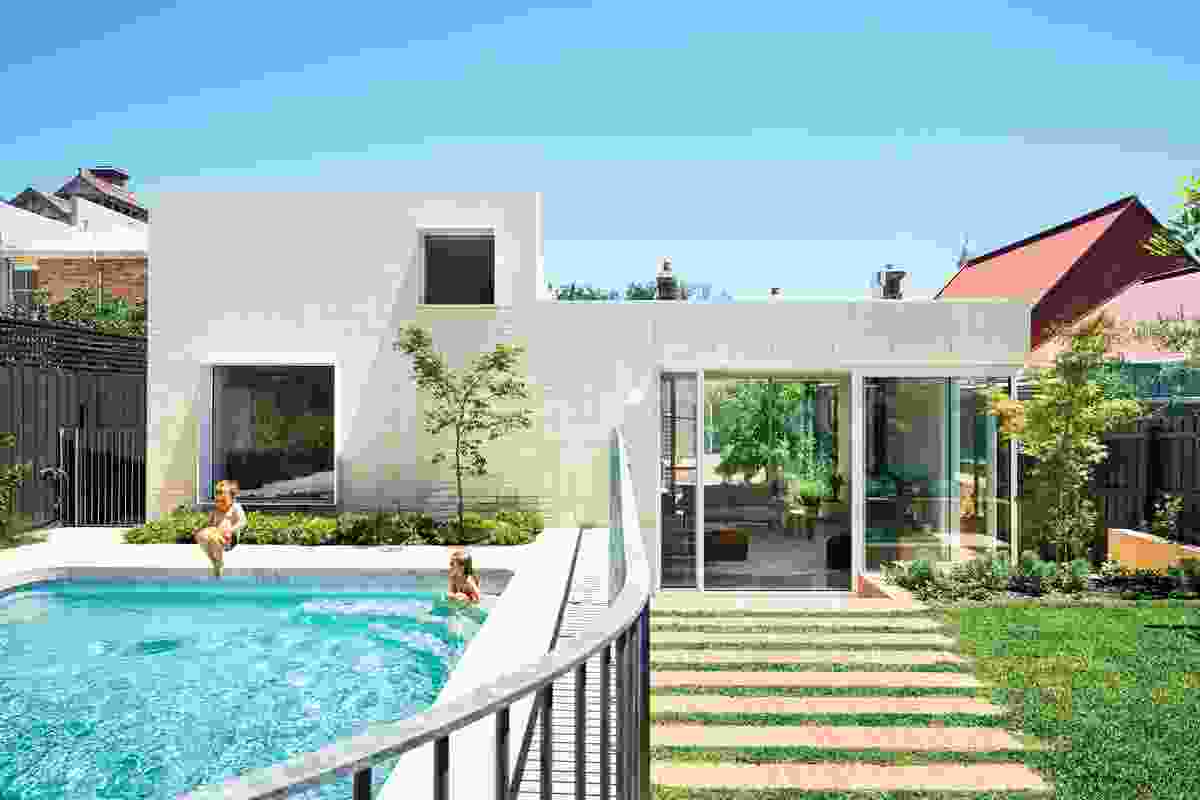 The crisp geometry of the rear facade is reinforced in the use of the non-traditional stack bond brick pattern. 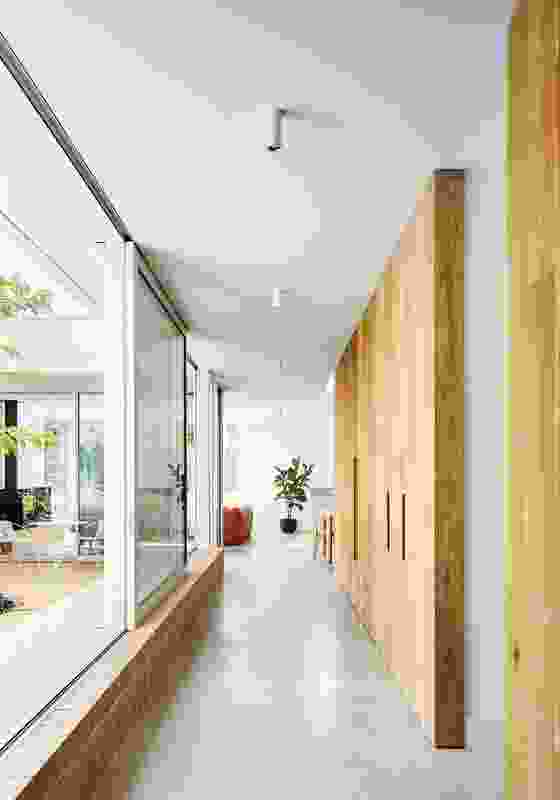 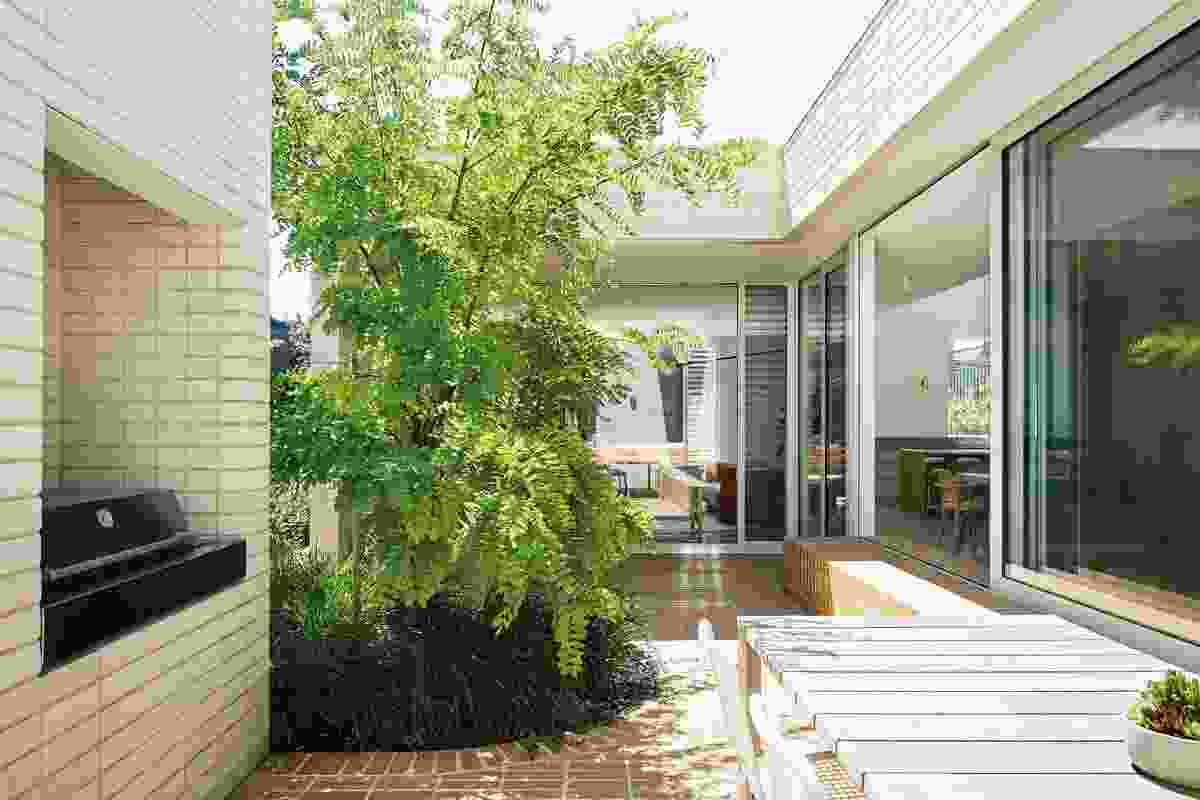 The courtyard that gives the house its name acts as a centralized lung to ventilate the house. 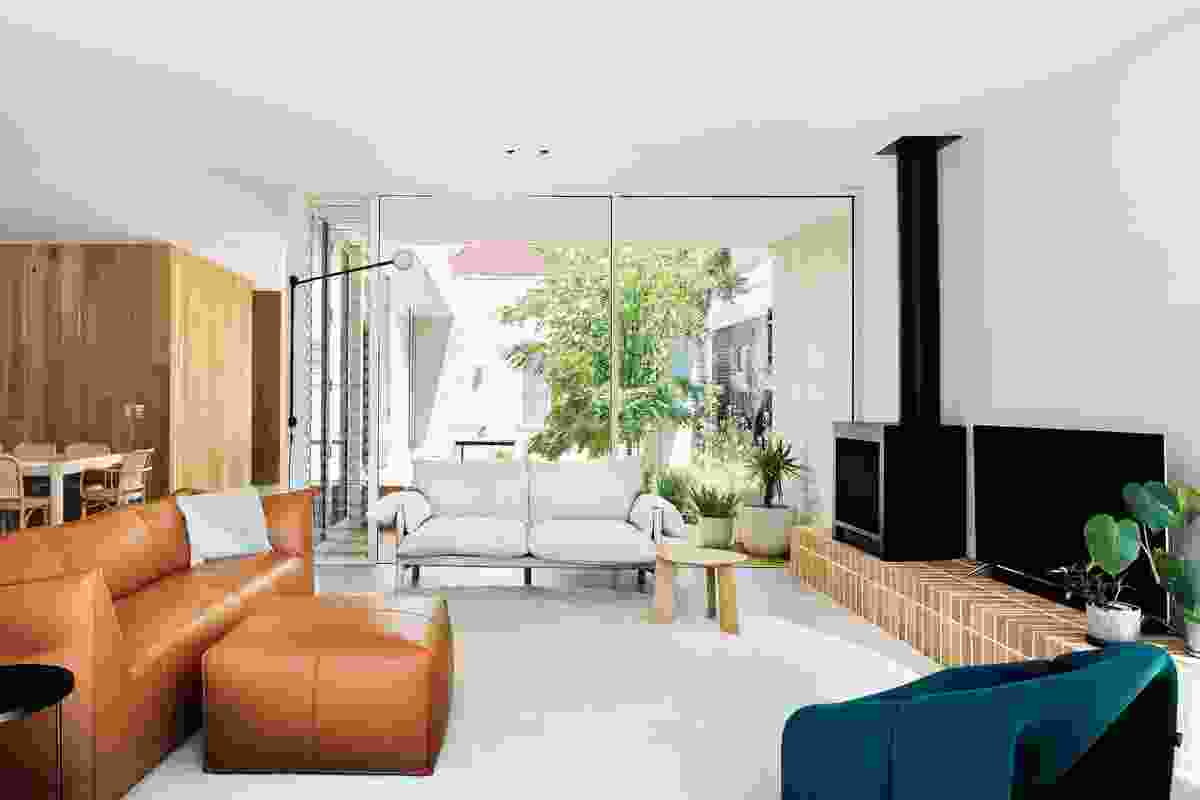 In contrast to the period home, ceilings have been kept low to enhance a horizontal spatial experience. 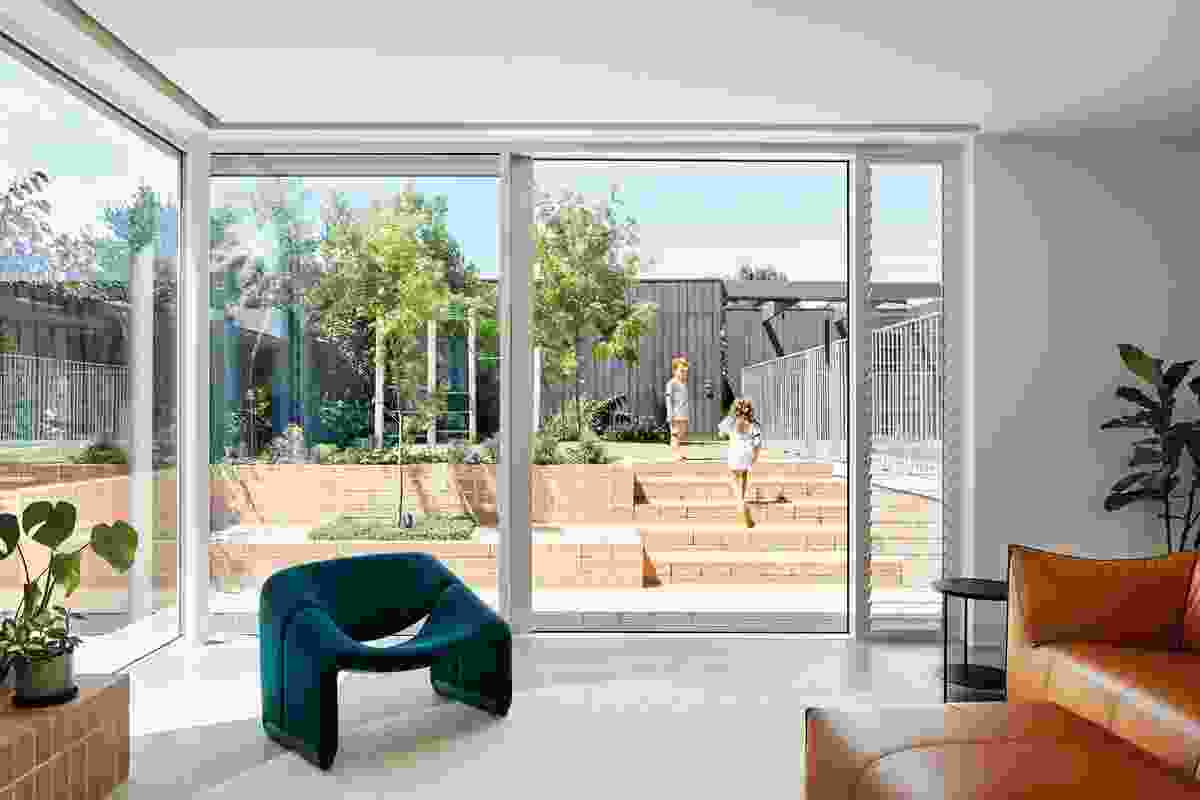 A series of brick plinths and stairs traverse the backyard’s steeply rising landscape. 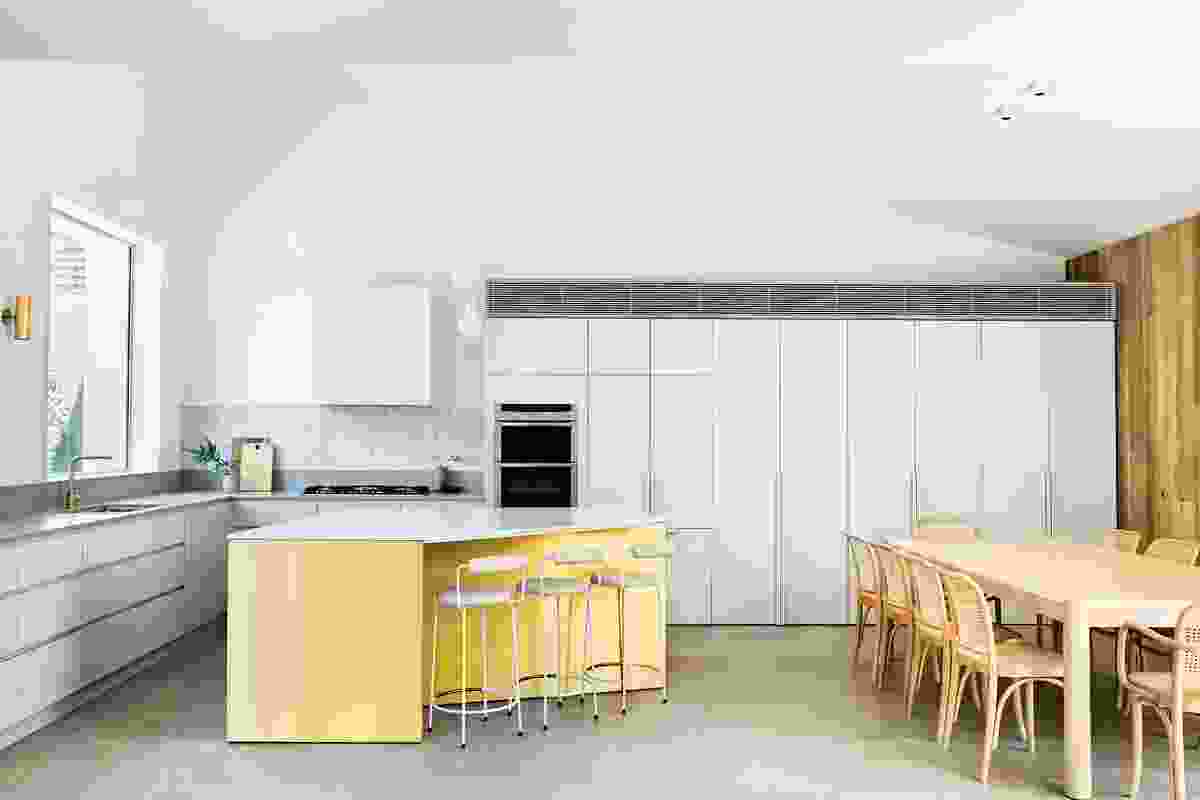 The kitchen bench height is in direct alignment with the water level of the pool, allowing for easy supervision. 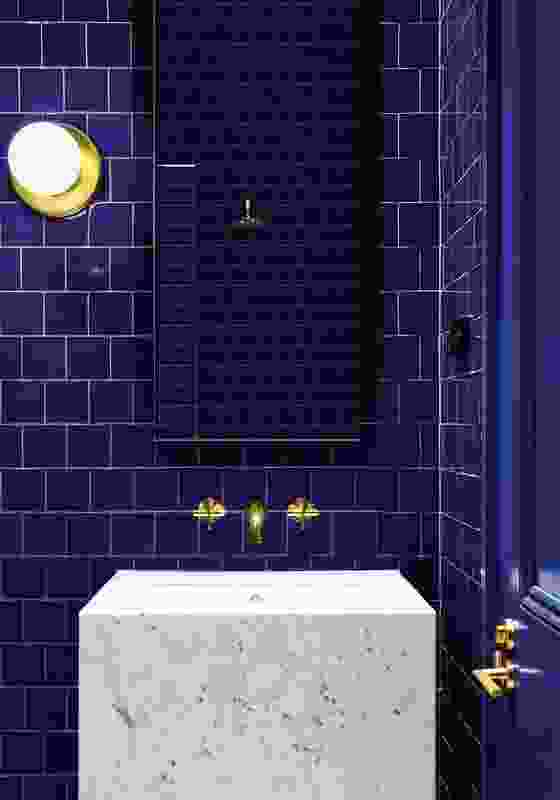 A vivid Victorian blue powder room is one of a series of small interventions in the existing house.