Citation
This project addresses the disconnection between the production and consumption of food in the city as a “field to table” chain through the insertion of an Urban Farmers’ Network adjacent to the Queen Victoria Market in Melbourne’s CBD. Privileging an emotive rather than a pragmatic response to the issue of sustainability, the project invites speculation on reconfiguring the city as a productive landscape. There is a delightful interplay between the profane and the sacred in the “plant cathedral” as well as in the “Avenue of Honour”, where an orchard gradually consumes the car park and the nutrients from the former cemetery beneath. In an area that tends towards the punitive rather than the playful, the jury commends this project for its sense of whimsy and celebration of sustainability as well as for the way in which it addresses the urban terrain through the provision of pedestrian thoroughfares and new forms of public space.

Project Description
The Urban Farmers’ Network and Memorial Projects are two new civic additions to the Queen Victoria Market. They form a sequence of landscapes along Therry Street and the existing car park site (the original Melbourne Cemetery). The project encourages sustainability through on-site food production and waste recycling.

The Urban Farmers’ Network comprises a new public forecourt to the market, a horticulture library, a kitchen garden, a surplus food bank, a productive rooftop and a conservatory for exotic edible plants, which would otherwise be imported. Drawing on Elizabeth Meyer’s landscape discourse about exploiting the beauty of landscape to elicit an emotional response to sustainability, the conservatory is imagined as a public “plant cathedral”. Reverent to nature, it serves a didactic role, while providing respite from the noise and tempo of the market.

The second intervention is a memorial along the edge of the car park. A longitudinal incision through the site creates a sunken pedestrian street lined with fruit trees - an Avenue of Honour. The memorial recycles the site’s high phosphate levels as well as acknowledging the secret that was concreted over.

At an urban scale, these interventions reconnect the market with Flagstaff Gardens and the business district beyond, stitching together Elizabeth Street and the west end of the city - a relationship that has suffered due to the fractured grid at the fringe of the CBD.

Citation
This proposal used an invited urban planning competition as an opportunity to explore planning strategies for large, high-density, high-amenity, sustainable cities. The proposal weaves together rural and urban programs into a productive, layered system of rural, urban and hybrid cells. These hybrid cells can be configured within the network to create continuous urban experiences in one direction, and rural in another (eco corridors within the hybrid cells connect all the rural cells). Public transport, public spaces of varying scales, and pedestrian routes are all woven into and through this “fractal community structure”, along with continuous networks of housing, retail and commercial areas within the urban cells.

While the jury had some concerns about some of the detailed architectural manifestation, it was recognized that this is notional only. What is at stake here is the potential of the hybrid urban form created through the layered system of networks.

Project Description
With the addition of Xiasha (a 178-square-kilometre new city to the east of Hangzhou), the Hangzhou conurbation is likely to become one of China’s mega-cities, with a population of more than ten million. The sheer size of the city will stimulate extraordinary economic activity but existing urban planning models seem unable to deliver either highly liveable or environmentally sustainable cities.

Symbiotic City is a new planning model combining nature and the city in a symbiotic relationship of mutual benefit. The model provides a framework for minimizing energy use and harnessing on-site renewable energy, on-site management and reuse of waste, on-site production of a substantial portion of the city’s food and on-site harvesting and reuse of the city’s water.

Symbiotic City emerges from layered networks of urban and rural systems. Even in the centre of the urban band, its citizens are never more than 800 metres (a ten-minute walk) away from large areas of rural open space. A rhythm of purely urban cells and purely rural cells are interspersed with hybrid cells. The rural cells act as cool sinks, easing the urban island heating effect and cooling the summer winds.

Citation
This project tackles a complex adaptive reuse project in the proposed redevelopment of the social housing estate at Atherton Gardens in Fitzroy for emergency refugee housing and associated social and commercial programs. On a site that has been the subject of many design proposals over the years, the jury was keenly aware of the complexities of the context. In particular, the jury was impressed by the way in which the project addressed the broader site conditions by identifying and leveraging off existing support services. The design demonstrates a high level of skill in reconfiguring the ground plane through grafting new structures and facilities around the base of the towers, rendering them almost invisible. The resultant urban grain provides more permeable and active street edges and a close fit with the existing morphology. Although the jury had some reservations about the architectural resolution of the towers themselves, overall the project is commended for its social sustainability “aspirations” in considering the increasing pressures of immigration as both responsibility and opportunity.

Project Description
The project begins with the redevelopment of Atherton Gardens in Fitzroy. In response to recent shifts in the social order for refuges and asylum seekers, it investigates how architectural design might contribute to social sustainability. These urban interventions aim to provide opportunities for incoming communities, to reintegrate the site into the urban grid and overcome the alienation of existing social housing. The masterplanning includes the UN Refugee Agency (UNHCR) support centre, emergency housing, language school, shophouses, retail and offices, all of which aim to assist refugees and asylum seekers to reintegrate into society. The new network may have built connection on the estate but, more importantly, it also enables people to seek connections outside and beyond it. 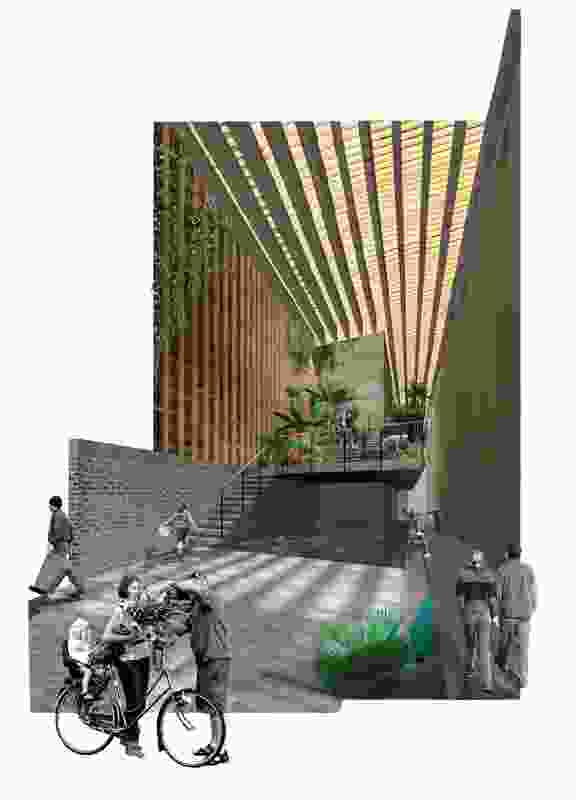 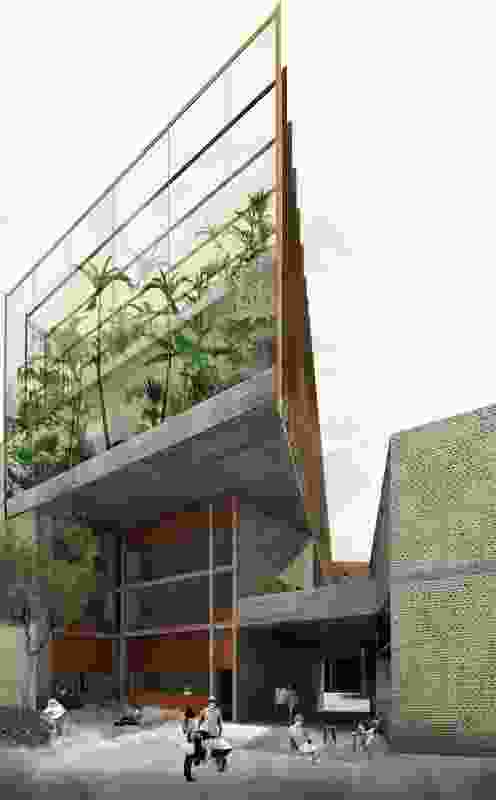 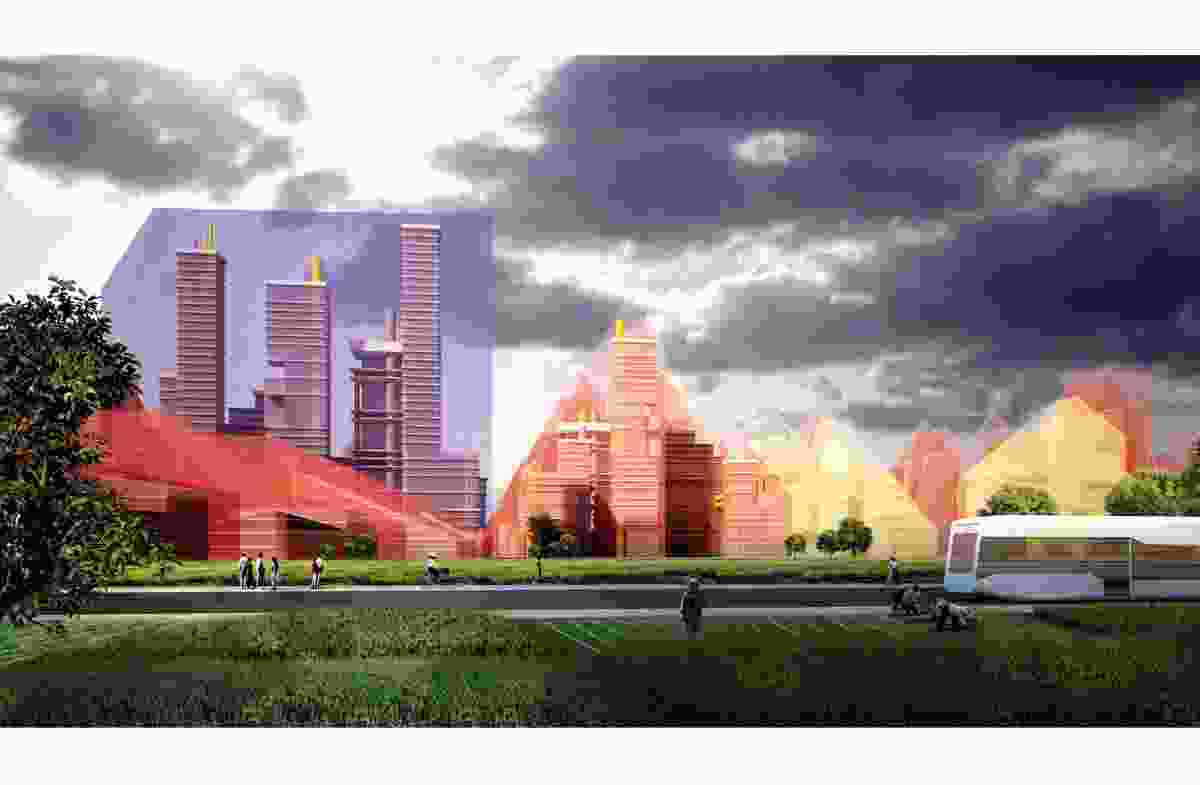 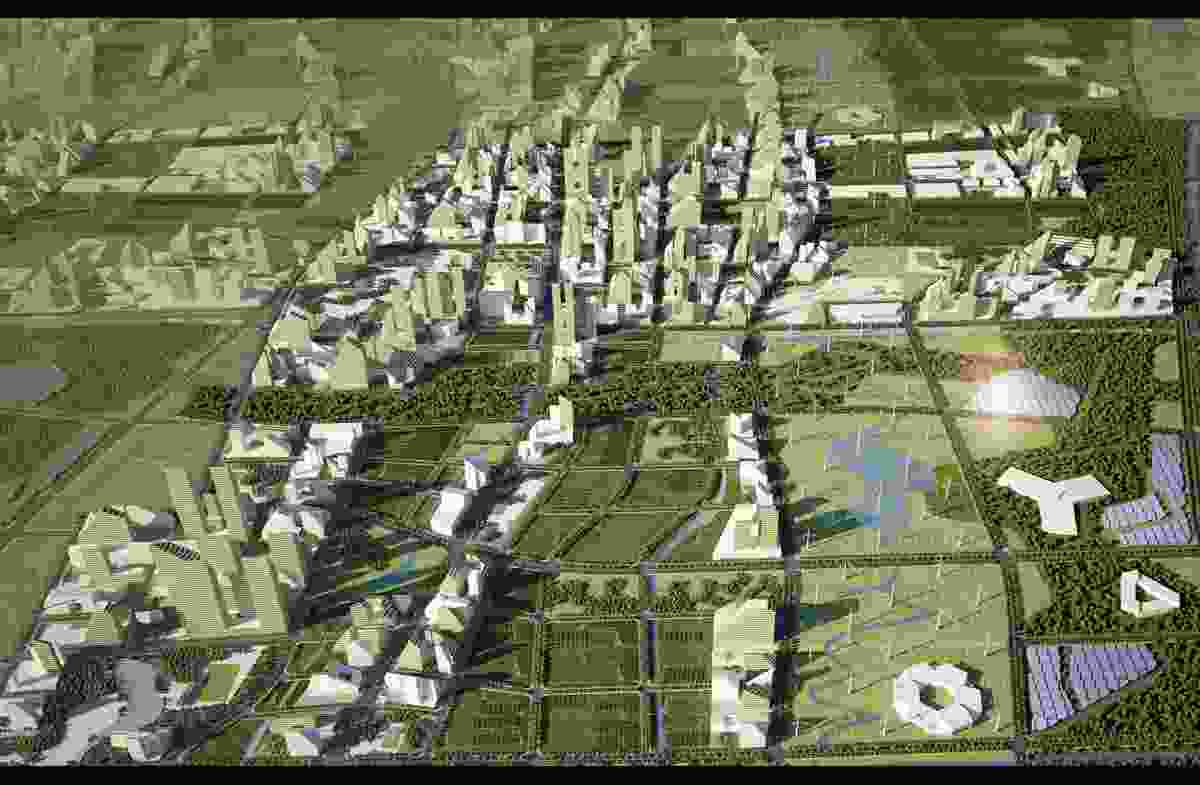 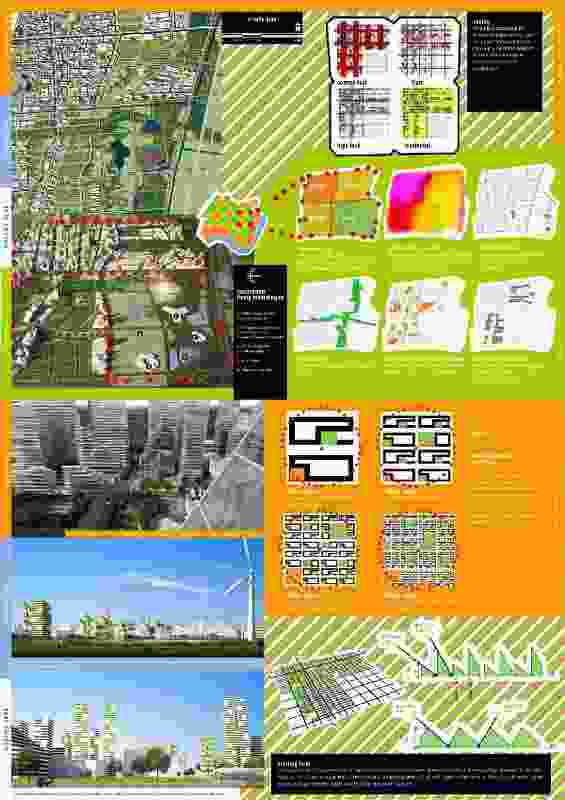 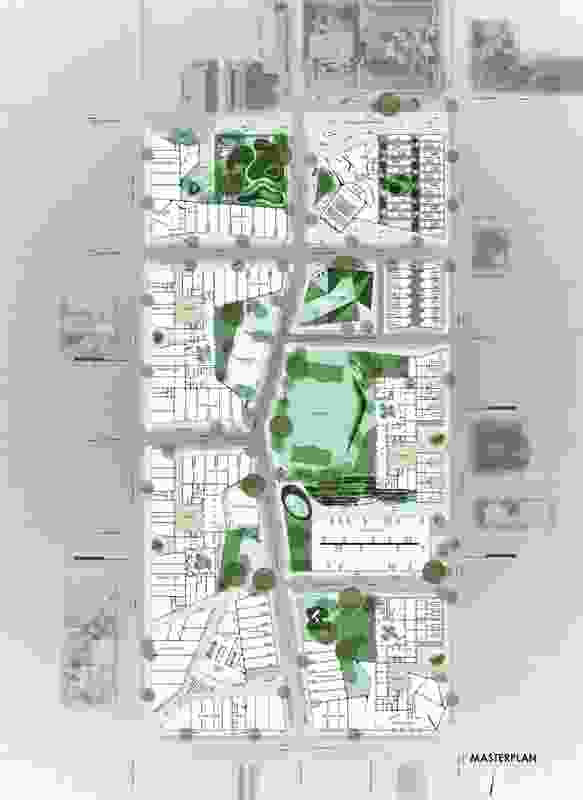 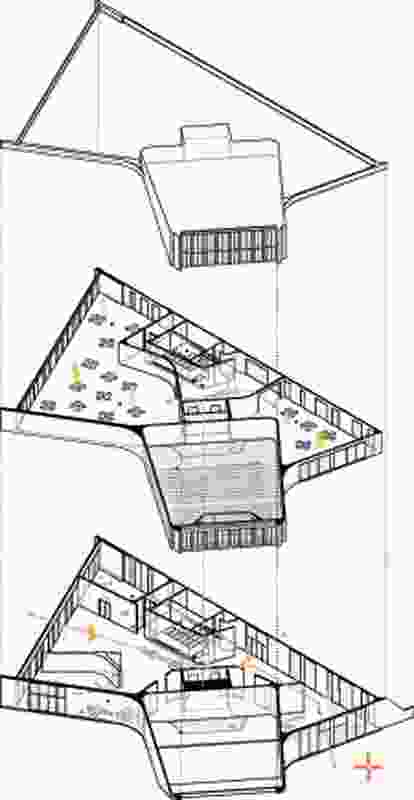 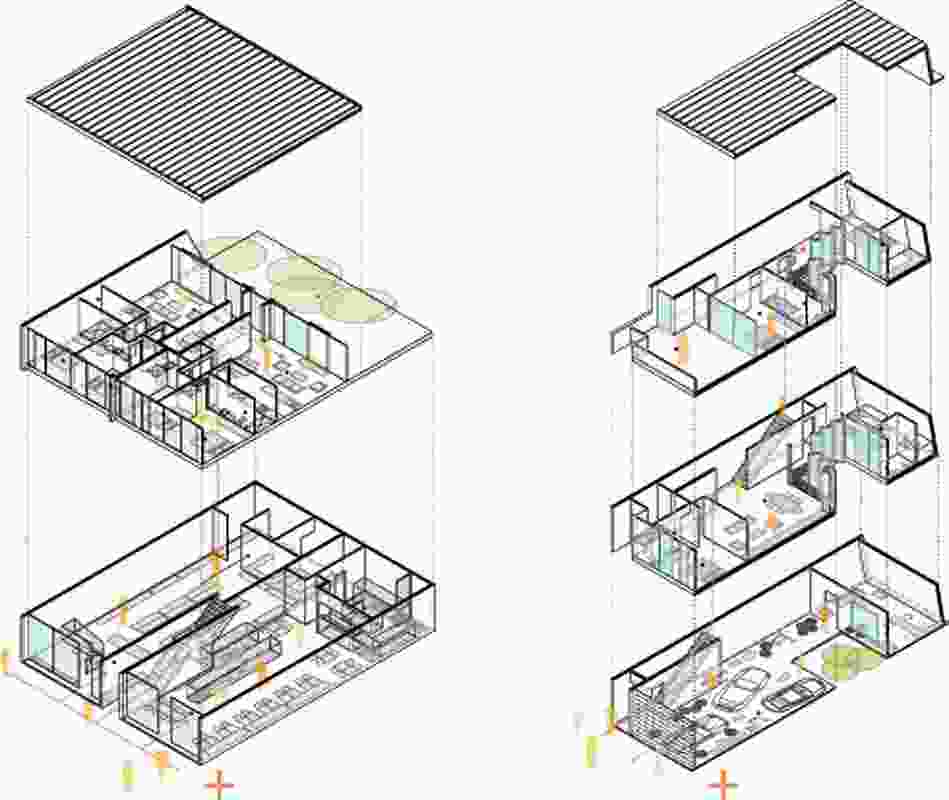