A youth housing project on the Aarhus waterfront by Terroir and Cubo Arkitekter draws on the formal language of Nordic architecture and establishes a new model for social architecture.

The Aarhus Student Housing in Denmark by Terroir and Cubo Arkitekter.

The recently developed area located in the northern part of the Aarhus harbour, formerly home to the city’s container terminal, is the setting for a number of residential towers, with programs ranging from luxury apartments to student housing. Aarhus Student Housing, a project developed and realized by Australian firm Terroir and Aarhus-based Cubo Arkitekter that has been nicknamed “Vulkanen” (“the volcano”), is set in this context and belongs to the less glamorous but no less important of these residential typologies: youth housing.

In a historical context, social housing and the existence of social welfare within the built environment lies at the core of what is widely labelled “Nordic architecture.” Time and again, acknowledging the importance of social housing and the social responsibility of the architect has been an essential part of the agenda of the masterpieces of Nordic modernism and, it could be argued, this new addition to Denmark’s second largest city sits within this tradition.

Acknowledging the importance of social housing and the social responsibility of the architect has been an essential part of the agenda of the masterpieces of Nordic modernism and, it could be argued, this new addition to Denmark’s second largest city sits within this tradition.

While an understanding of the importance of this agenda still shows its presence today, the many new buildings competing for attention on the Aarhus harbourfront tell a different story. The virtuous notion that residential buildings are part of the city fabric and should create an “architectural background” for more prominent public buildings – as Danish architect Kay Fisker believed – seems to be long gone.

Fortunately, however, the social agenda is a core value in the small enclave of four student housing projects of which this building is a part. With all four designed by local architecture firms – and no, this is unfortunately not always the case in post-GFC Denmark – and each offering its young inhabitants stunning views and a central location, these projects establish a new model for social architecture that recognizes the student as a valuable asset for the city, both in the present and the future.

Although Fisker, a seminal figure of Danish architecture, built mostly in and around Copenhagen – the city in which Terroir has its Danish base – he also left his mark on the city of Aarhus when, in collaboration with C. F. Møller and Povl Stegmann, he won the competition for the Aarhus University campus in 1931. The simple and bold brick volumes of the university became the inspiration for many projects across the country and gave rise to an easily recognizable formal language explored from the 1940s well into the 1960s heyday of Nordic architecture. The Volcano, with its singular choice of material and volumetric presence, appears to ascribe to this same line of investigation.

In the Volcano, we also find another “tradition,” this time a contemporary one. In recent years the idea that any new building should be given a name – an honour that used to be reserved only for buildings that were loved or loathed by the public – has proliferated to the extent that Denmark has become a country full of Waves, Mountains, Icebergs and now also Volcanoes. In this case, the building was named post-construction by its inhabitants and one might argue that the nickname proves the strong narrative qualities of the building as compared to the usually more simplistic use of image and metaphor during the design process.

This narrative, too tempting not to pursue, has interesting roots in the Danish language. In spoken Danish, “living on volcanoes” signifies that you are living a turbulent life of great ups and downs, “dancing on volcanoes” implies a carefree and happy life, while the short form “on volcanoes” describes a fun night out. Whether any – or all – of the above applies to the young inhabitants of this building is uncertain, but also very likely.

Looking at the building from the outside, its robust materiality, stocky proportions and monolithic shape give it a geological appearance, one of belonging in this place. The modest and robust concrete exterior fits into the harbour environment while simultaneously providing a canvas to highlight more intricate gestures that introduce another scale and a dialogue between inside and outside spaces. Through four large openings in the volume, a “soft core” is revealed – a vibrant, dynamic and optimistic interior with a colour scheme of yellows, oranges and reds – another probable reason for the building’s name. The interior is organized around an open atrium that, in its ascension towards the skylights, merges with these openings and outdoor spaces to create an extended spatiality and shared experience in the inhabitants’ daily lives.

The openings – a retracted entrance which creates a covered outdoor space and communal kitchen area on the ground level, a covered terrace on level three, and two roof terraces cut into the volume at level six that reveal the fiery red cladding of the interior – mark the primary elements of the facades. These openings accommodate various and changing opportunities for capturing the sun, sheltering from the wind and framing views towards city, harbour, forest, beach and sea. Between these larger apertures, rhythmically placed windows – a result of the fifty small one-bedroom units evenly distributed around the atrium – establish the general texture of the envelope. Two window variations, a large square recessed window and a rectangular floor-to-ceiling window placed flush against the light grey facade, offer a play of light and shadow absent from many of the neighbouring buildings on the harbour.

Still, many of these elements do not stem from the idea of the volcano alone, but also from a parallel focus on creating a highly sustainable building that depends not on technological solutions but on the intelligent use of architectural properties. These include reduced surface area, orientation and spatial organization – virtues which are often neglected in discussions about sustainability, but which point in the direction of a regional approach to sustainability based on logic and knowledge of local building traditions.

Overall, the restrained palette of materials and colours makes reference to the Nordic tradition of simple and intelligent use of architectural elements to articulate the narrative and spatial qualities of a building. As such, this project undoubtedly expresses both experience and understanding of a Nordic context and tradition, while the fruitful marriage of two offices from different cultures and backgrounds seems to have created a space for reflection that is youthful and fresh – something that often happens when you get the chance to see yourself through an outsider’s eyes. 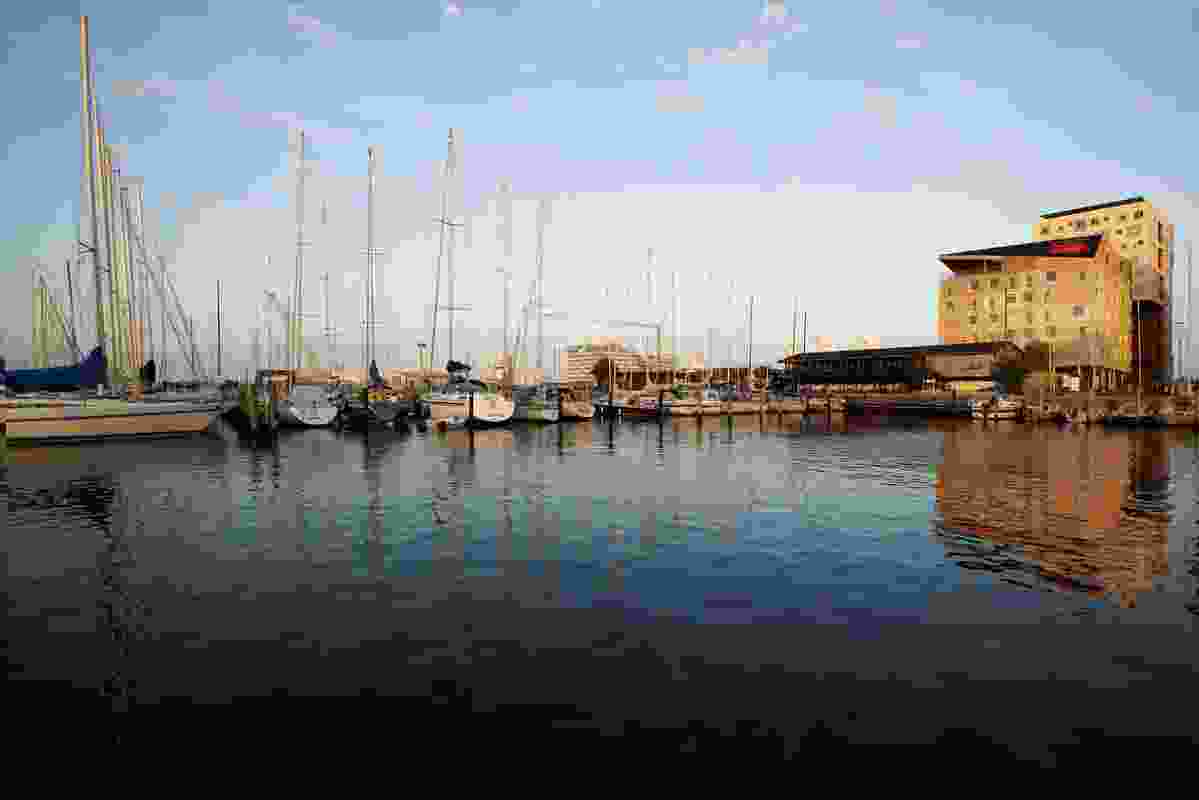 The Aarhus Student Housing in Denmark by Terroir and Cubo Arkitekter. 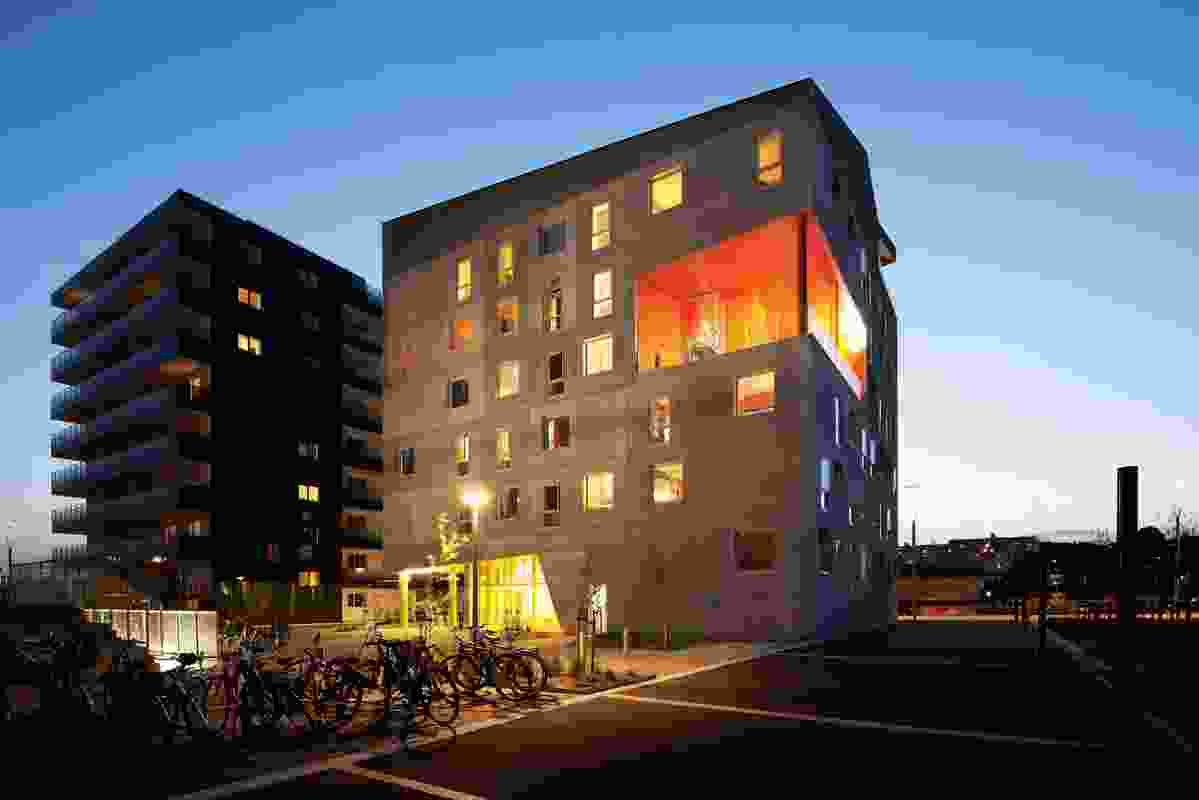 The scheme has been nicknamed “Vulkanen” (“the volcano”) by its residents, likely due to its monolithic shape and the colourful openings that punctuate its facade. 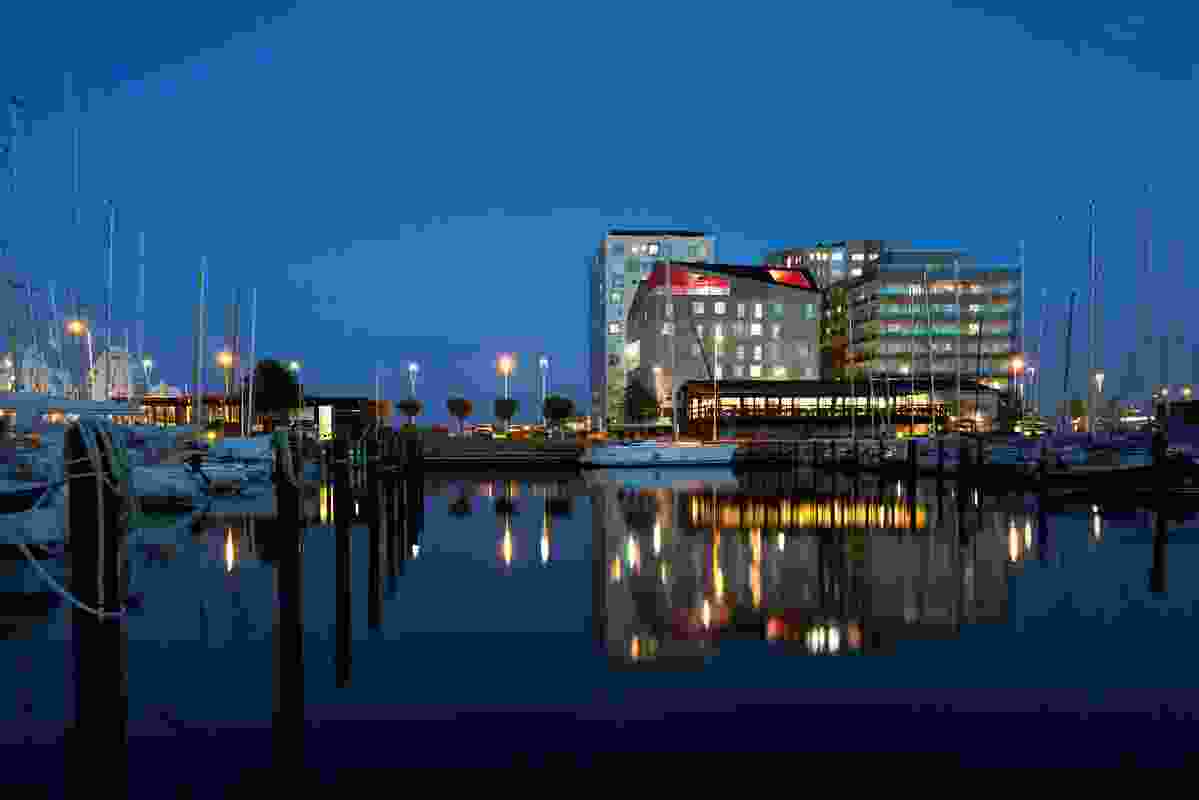 The project is one of four student housing projects on the Aarhus harbourfront. The Iceberg housing scheme by JDS Architects, CEBRA, SeARCH and Louis Paillard can also be seen in the background (far left). 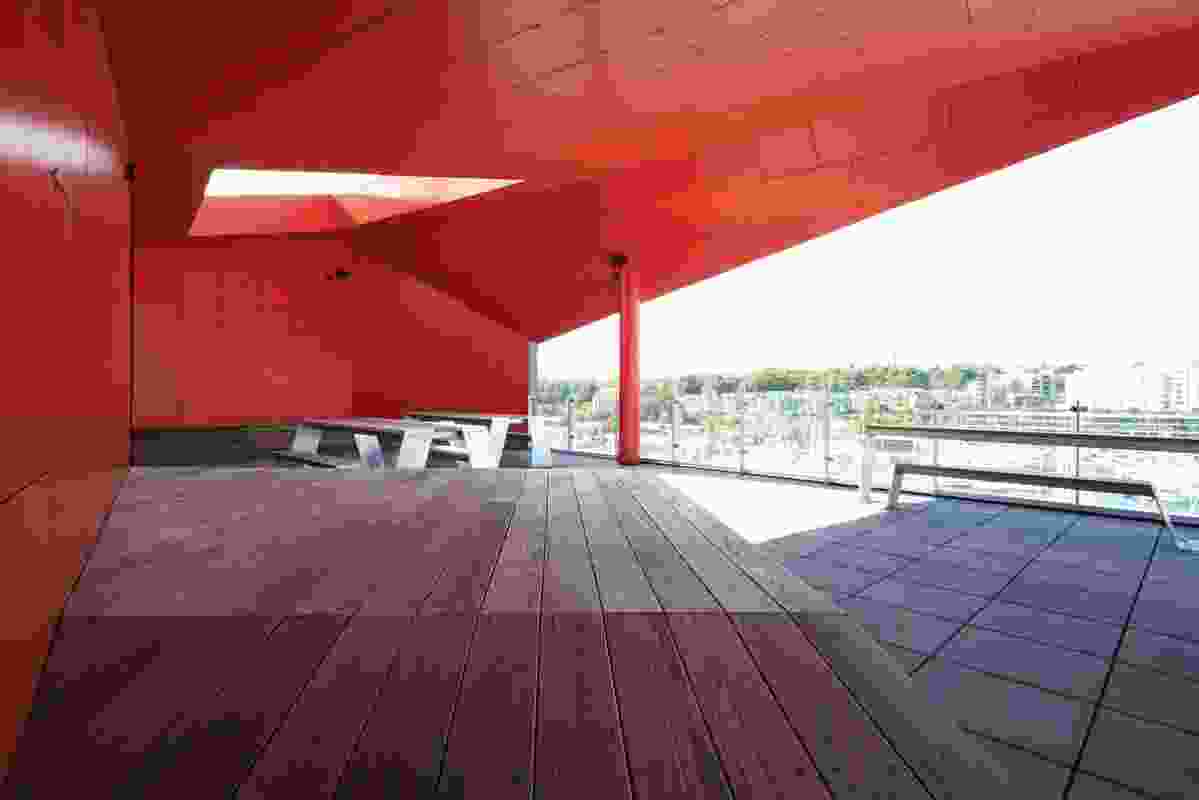 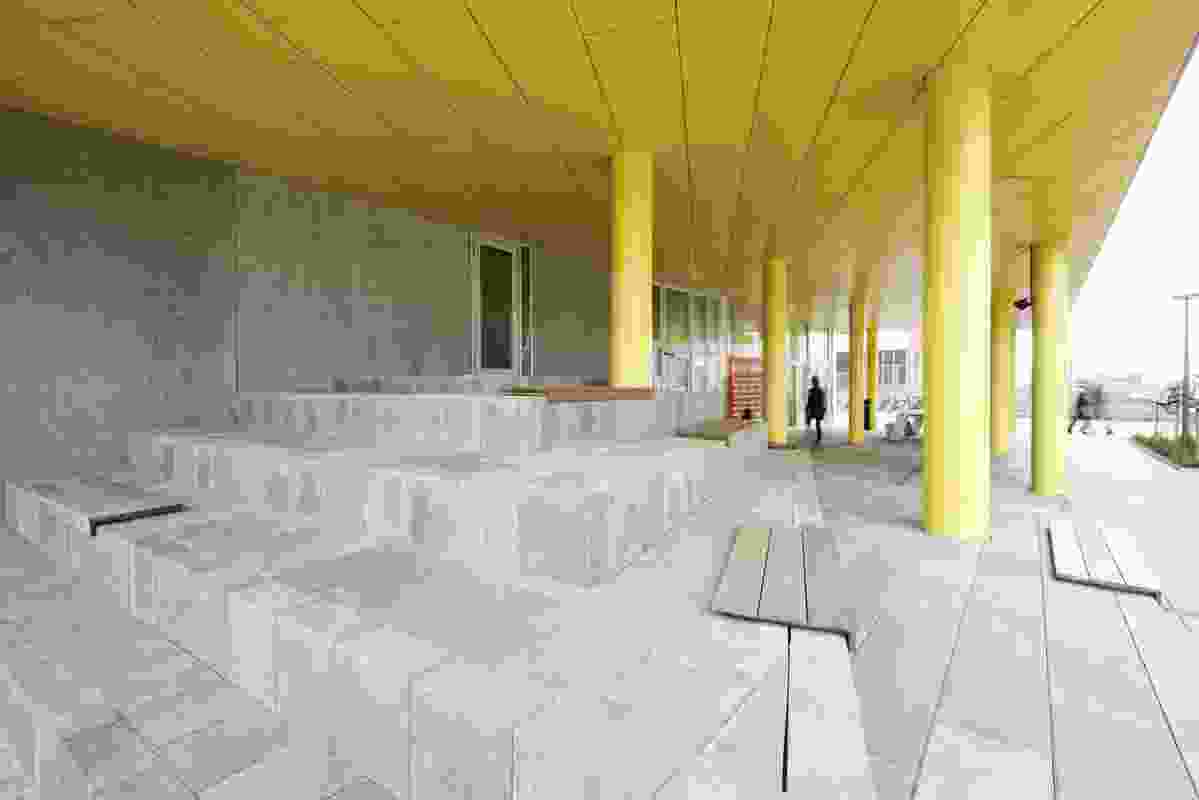 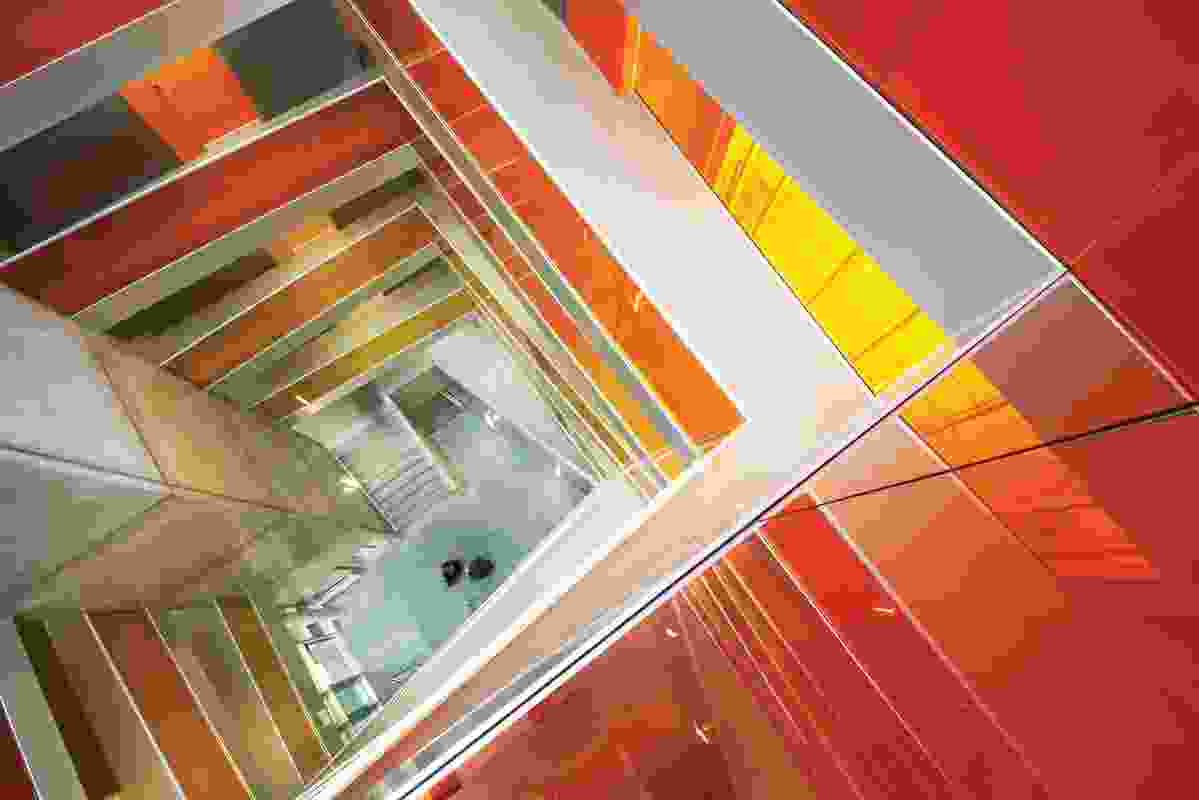 An open atrium at the building’s core is lit from above by two skylights and merges with the four facade openings. 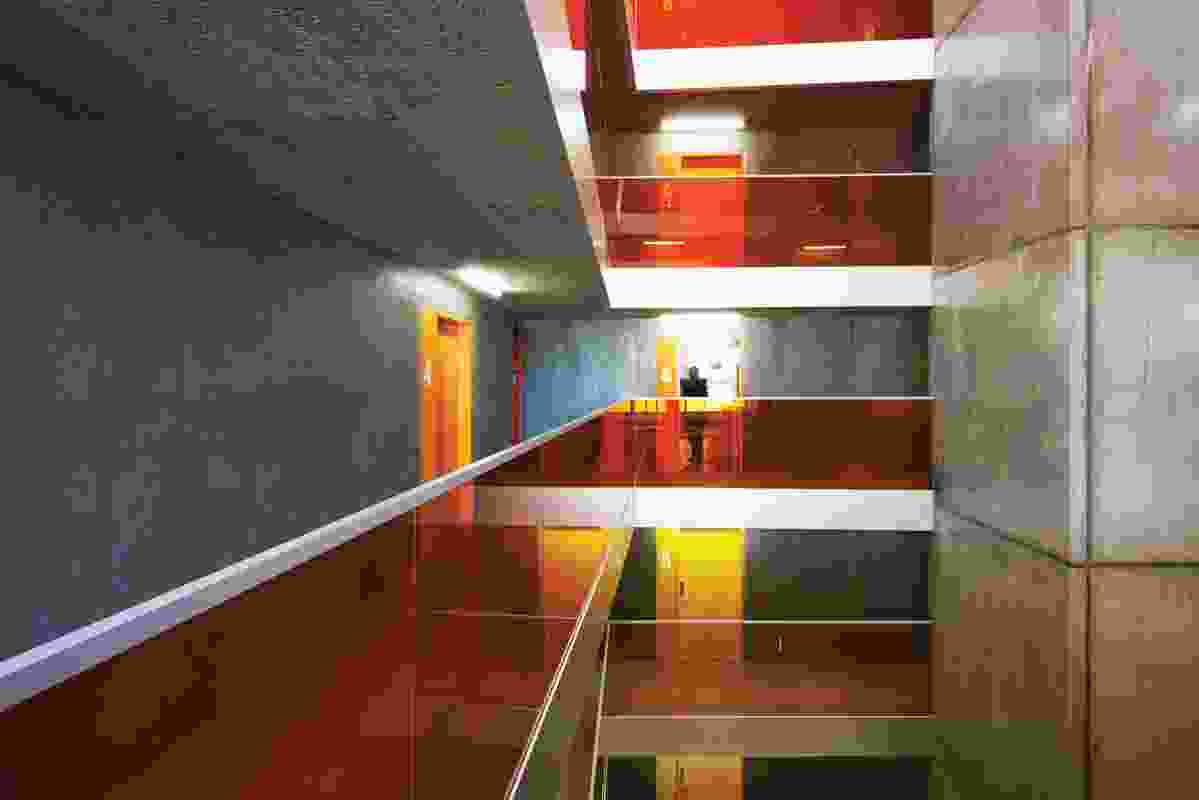 Internally, each floor reflects the gradation of colour from yellow at the entrance to red on the rooftop.