Richard Kirk’s design for the new ABC headquarters in Brisbane speaks to the organization’s role as an assiduous messenger, with the prominent public setting and dual-function foyer reinforcing its role not just as a broadscaster, but as a promoter of culture as well.

When the ABC’s Brisbane operation moved into its new headquarters in South Bank, designed by Richard Kirk Architect, it reunited teams and divisions that had been dispersed across nine locations for five years. In 2007 a cancer cluster was identified, forcing the evacuation of its former Brisbane studios at Toowong, and the dislocation disrupted operations and morale. Consequently, the overriding imperative guiding the design of the ABC’s new home in Brisbane was the need to provide an explicitly healthy and supportive environment for its staff.

The ABC is a renowned public institution required by its charter to contribute to a sense of national identity, to support cultural understanding and to encourage and promote music, drama and the performing arts in addition to providing high-quality broadcasting services. One of the attractions of South Bank was that the prominent public setting would strengthen the ABC’s capacity to meet the requirements of its charter. A close proximity to Griffith University’s South Bank Campus, the Queensland Conservatorium Griffith University (formerly the Queensland Conservatorium of Music) and the Queensland Performing Arts Centre (QPAC) promised synergies and interactions across a variety of cultural activities, further strengthened by the co-location of the Queensland Symphony Orchestra (QSO) with the ABC.

The chosen site was an area of residual parkland adjacent to the conservatorium, bounded by Grey and Russell Streets and by the bougainvillea-covered arbour that shapes and shades the pedestrian spine of the parklands. The loss of green space was compensated for by the creation of additional open space within the parklands, including the new riverside lawn and amphitheatre of the River Quay development. An expectation of the South Bank Corporation was that the presence of the ABC in such a prominent location would increase activation of both the parklands and Grey Street.

The architecture of the new headquarters responds strongly to the constraints and possibilities of the site, while deftly fulfilling the ABC’s need to provide a supportive, safe and contemporary working environment with due recognition of the South Bank Corporation’s planning requirements.

The general planning, form and materials of the building benefit from principles and elements used in Richard Kirk’s schemes for the Cutting Edge studios in South Brisbane and the Sir Llew Edwards building for the University of Queensland. Constraining the height to four storeys, rather than the five allowed by South Bank’s planning framework, contributed to a number of carefully scaled responses to context, especially to the strongly defined order of Robin Gibson’s Queensland Performing Arts Centre (QPAC) Playhouse immediately facing the ABC across Russell Street. The modulated, rectilinear form of the ABC Centre offers a foil to the canted planes and sculpted outlines of the recently completed Brisbane Convention and Exhibition Centre Grey Street extension and provides a disciplined background to the snaking curves and writhing tendrils of the bougainvillea arbour.

Expression of the nature and function of the internal spaces is sublimated by enclosing each of the floors in independent planes of modular, floor-to-ceiling glazing. Heat and glare on the parklands elevation are controlled by automated and programmable external aluminium blinds, which provide a measure of transparency to and from the parklands even when fully deployed. In contrast, the elevations to Russell and Grey Streets are shaded and screened by a visually lively yet static array of folded, coated steel blades. The rhythmic, sculptural geometry of the twisted and folded planar elements of the screen animates the two street elevations.

Richard Kirk has concentrated a pronounced expression of the ABC’s function and purpose in an emblematic crescendo of form and space at the junction of the parklands and Russell Street elevations. A two-storey glazed box cantilevers out into the view along Russell Street. The drama of this projection is amplified by a contrasting excision of the building to signal entry and the atrium within. All is captured against the dark, metallic plane of the over-sailing roof. The principal broadcasting studios for the local station, ABC Radio 612, occupy the lower level of the cantilevered volume, with the Radio National network studios on the upper level.

Many live broadcasts are made from these studios and their prominence and visibility are in complete contrast to the backroom location of the equivalent studios at Toowong. Here they command a view towards the centre of the city, the river and the parklands. Their prominence signals the ABC’s wish to take advantage of its new setting by broadly projecting its presence. The acoustic and environmental requirements of the studios are provided by a multi-layered glazing system cooled by an acoustically attenuated, natural airflow and further shaded by an inner lining of timber blinds. The use of timber here is clearly intended to recall something of Brisbane’s timber-and-tin traditional vernacular, which informed much of its claim to a regional architecture.

The overt expression of entry invites visitors into the naturally lit atrium and the major stairway that connects to the levels above. Access to most operational spaces and offices is securely controlled at this point, while the foyer provides a public exhibition space and access to the ABC media production studio that also functions as the QSO rehearsal and performance space. This acoustically tuned and tuneable space embraces a range of sophisticated active and passive technologies. The frank exposure of acoustic, lighting and air movement systems within the space conveys an engaging sense of focused experiment and creative endeavour.

Efforts to enhance the working areas for staff are most evident in the two levels of open-plan space that extend the full length of the parkland wing on levels one and two. These benefit from a remarkable sense of space and amenity and command outstanding views of the river and city centre across the green foreground of the parklands. The open accessibility of all working spaces has helped to strengthen shared commitment and purpose across the relocated operational groups.

With the exception of the overt expression of the radio studios, the architecture of the ABC’s new headquarters is discreet and restrained, in keeping with the ABC’s reputation of being the assiduous messenger rather than the message. The relative modesty of scale and form serves to link key aspects of the immediate surrounds of park, street and neighbouring structures. The new facilities offer a generous sense of amenity and are organized to foster purposeful interactions between staff drawn back together after the harrowing closure of the Toowong studios. Further, the ABC in its new home, shared with the QSO, has the potential to become an even stronger contributor to the cultural and performing arts by serving as the catalyst for imaginative collaborations with and between the other prominent cultural institutions that it has joined at South Bank. 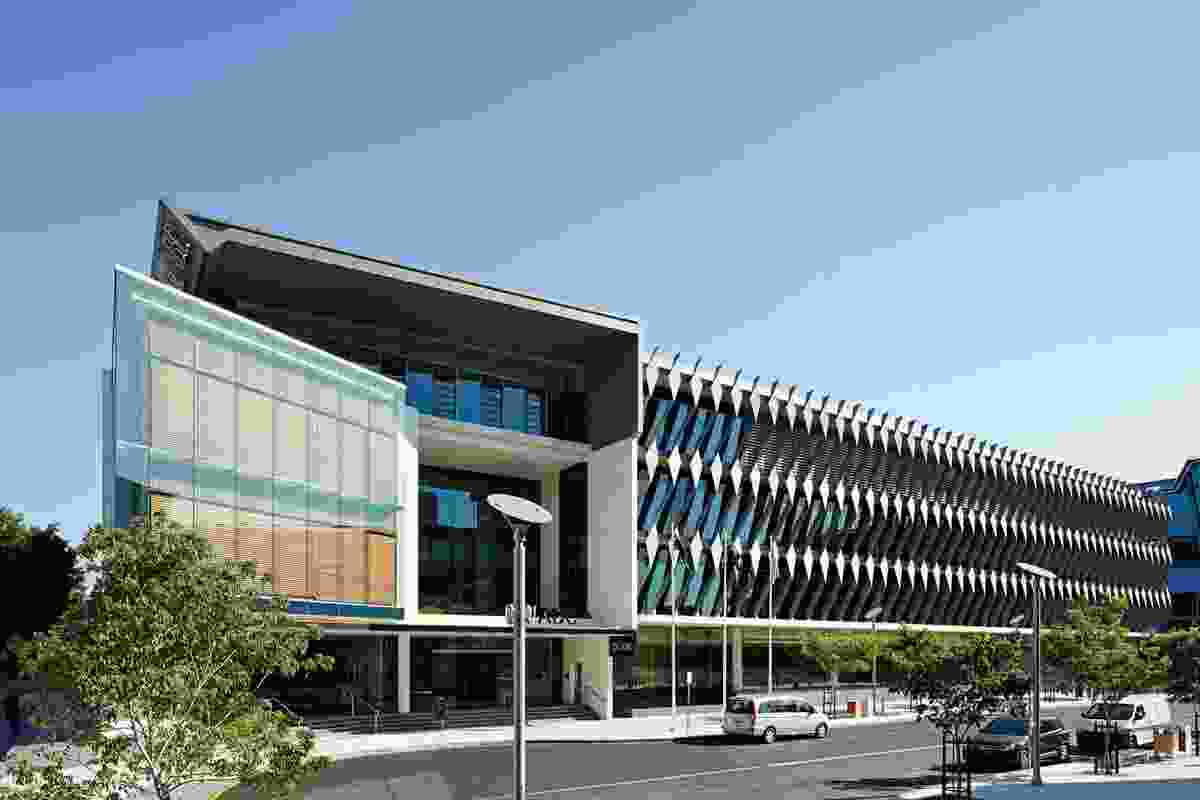 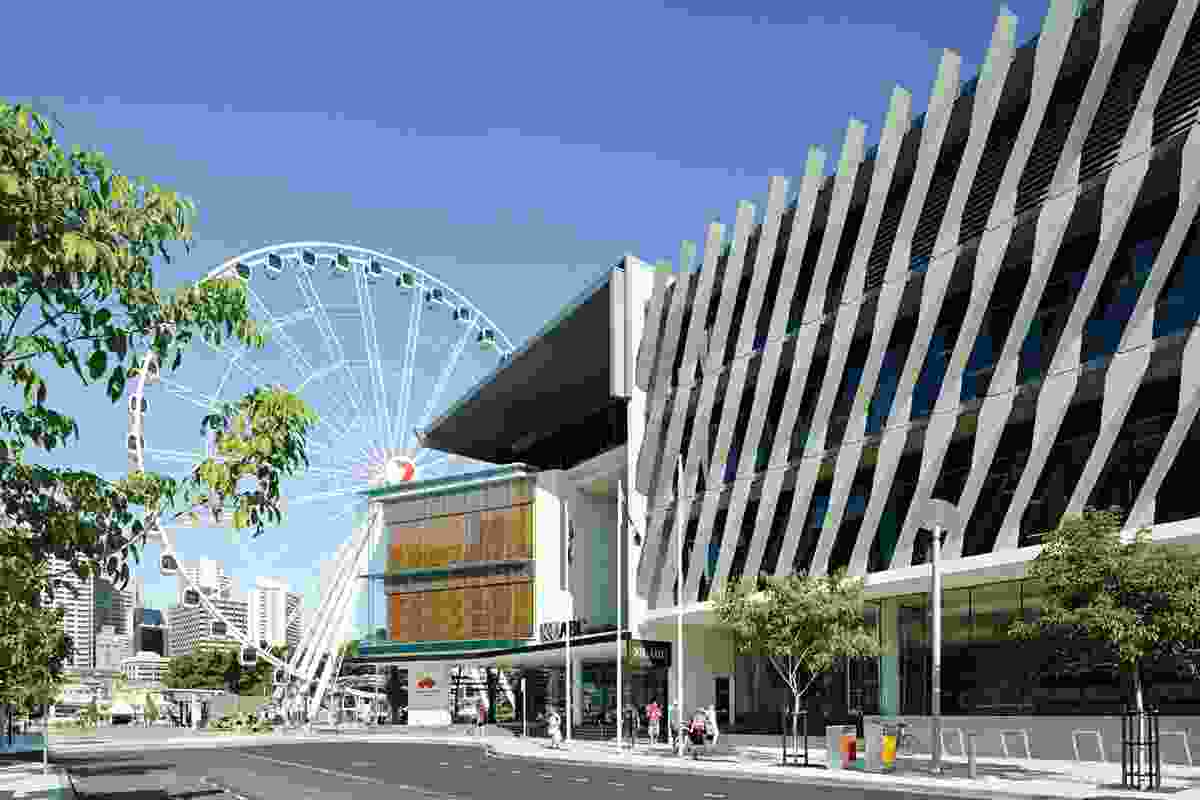 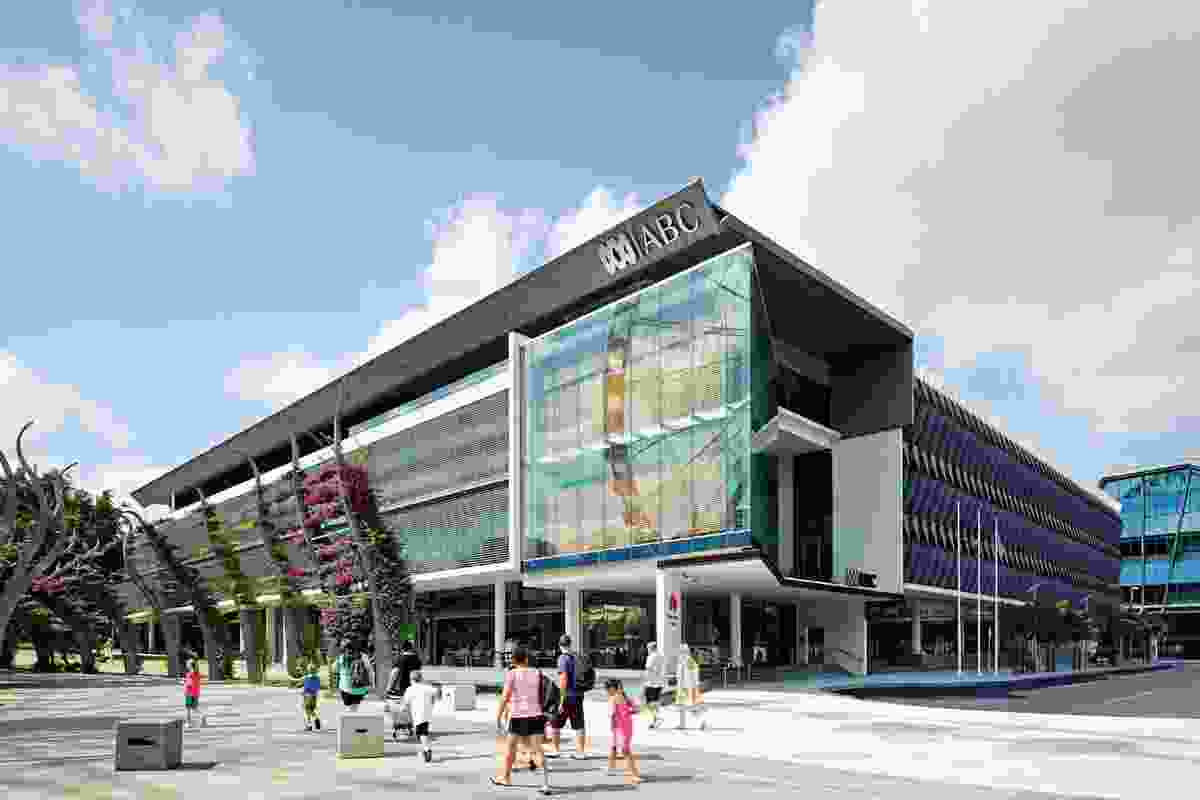 The rectilinear building contrasts with the curved arbour. 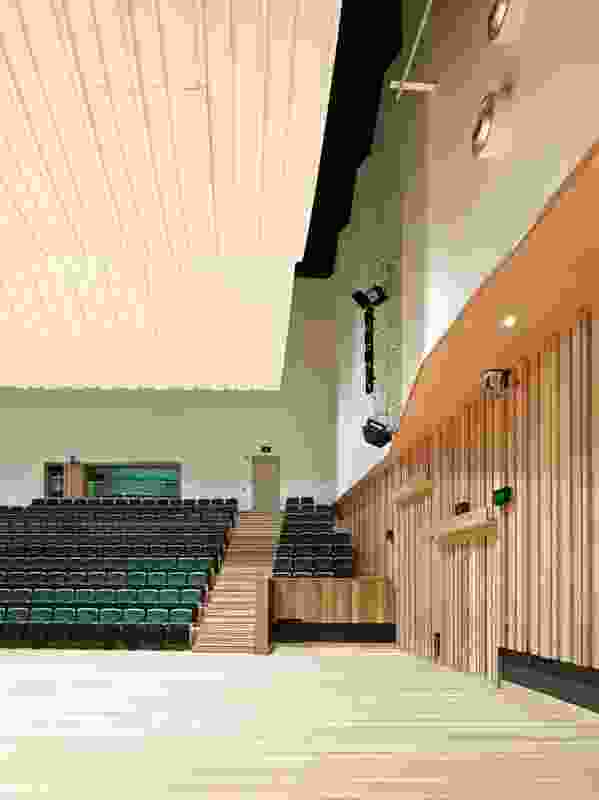 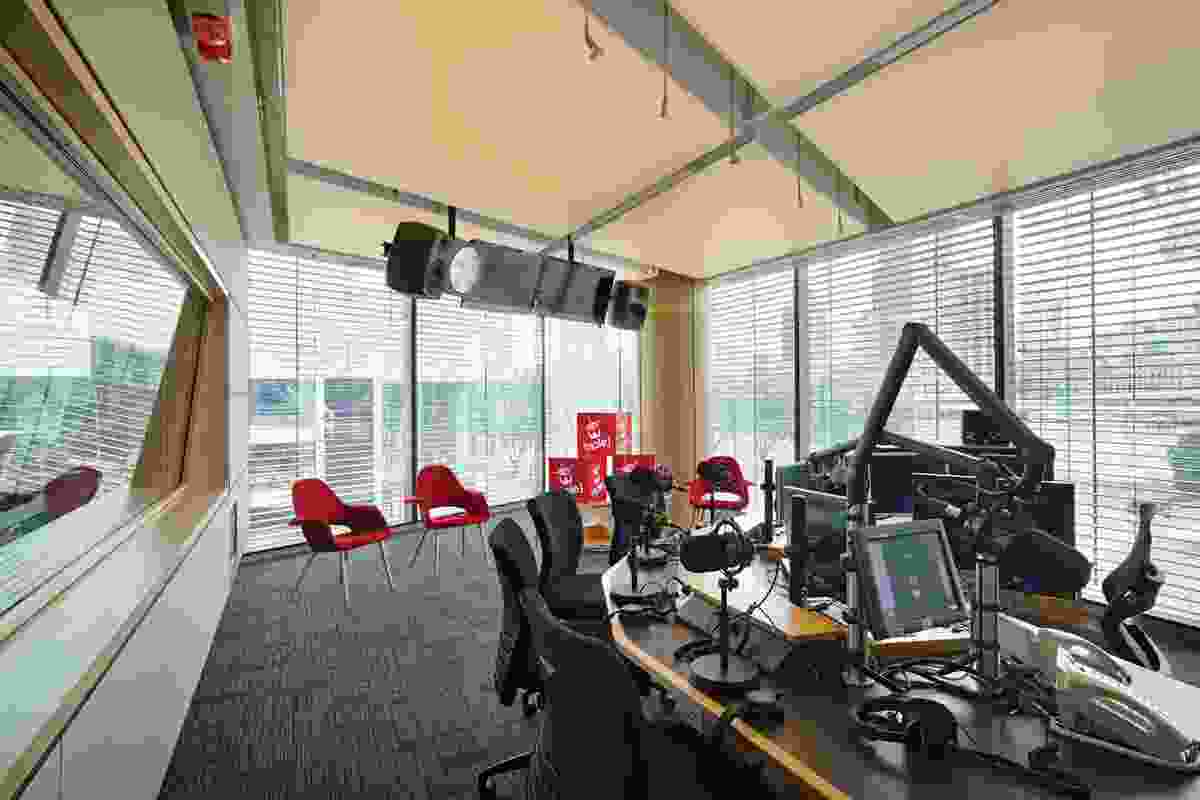 The radio broadcast studios cantilevered out over Russell Street. 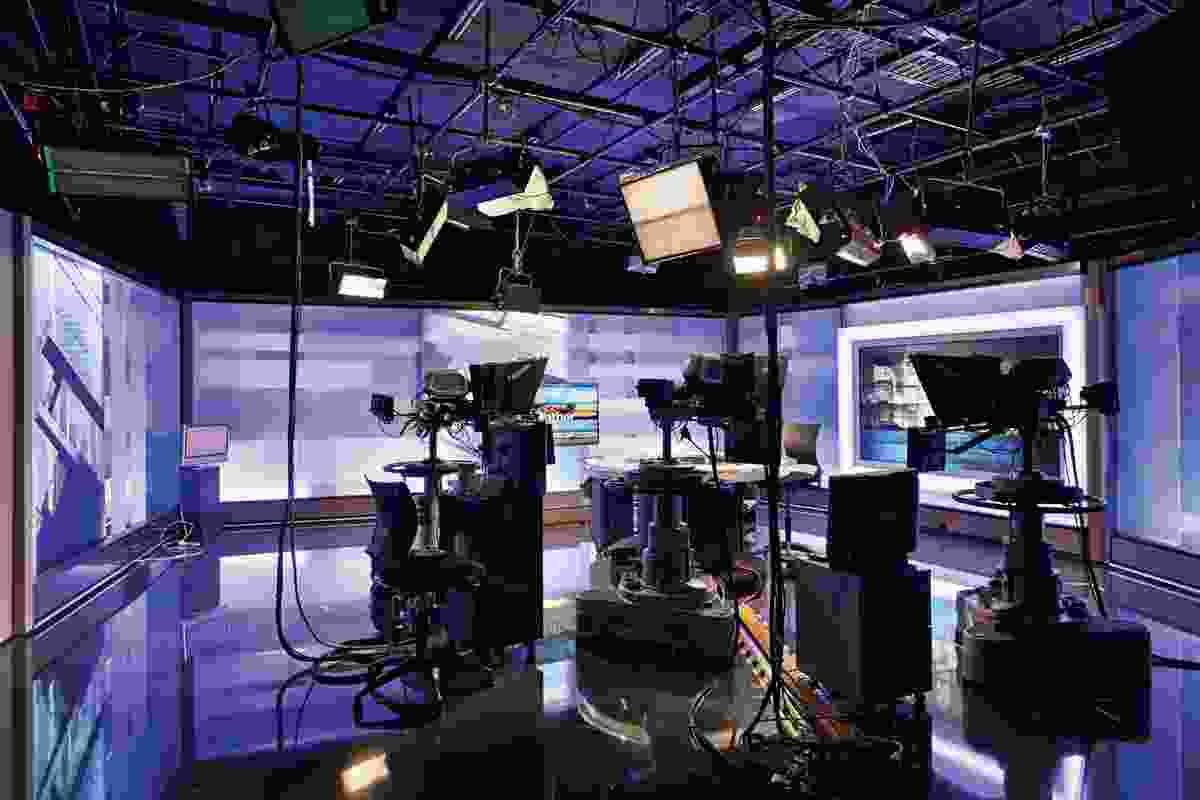 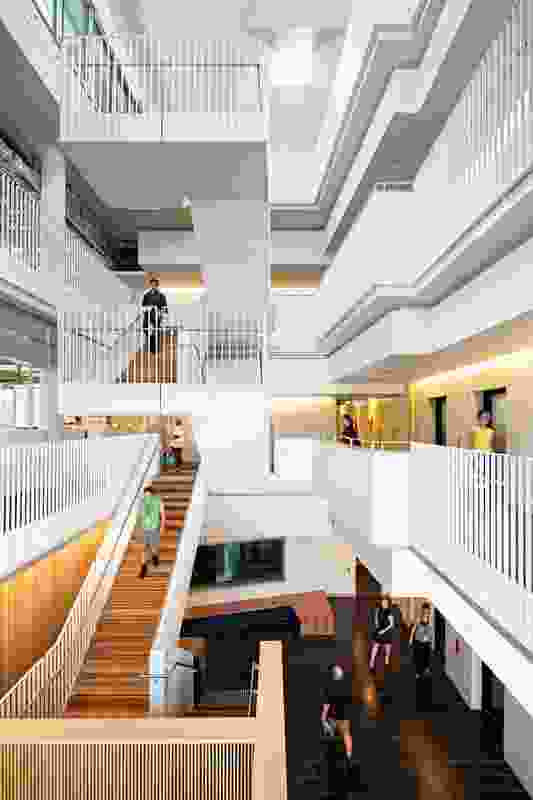 The foyer’s atrium also serves as an exhibition and QSO performance space.

The draws visitors into the naturally lit atrium beyond. 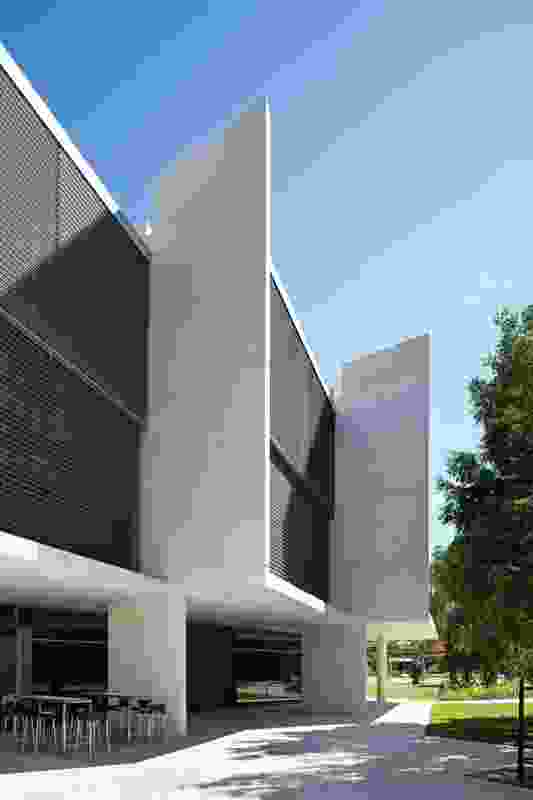 Relative modesty of scale and form. 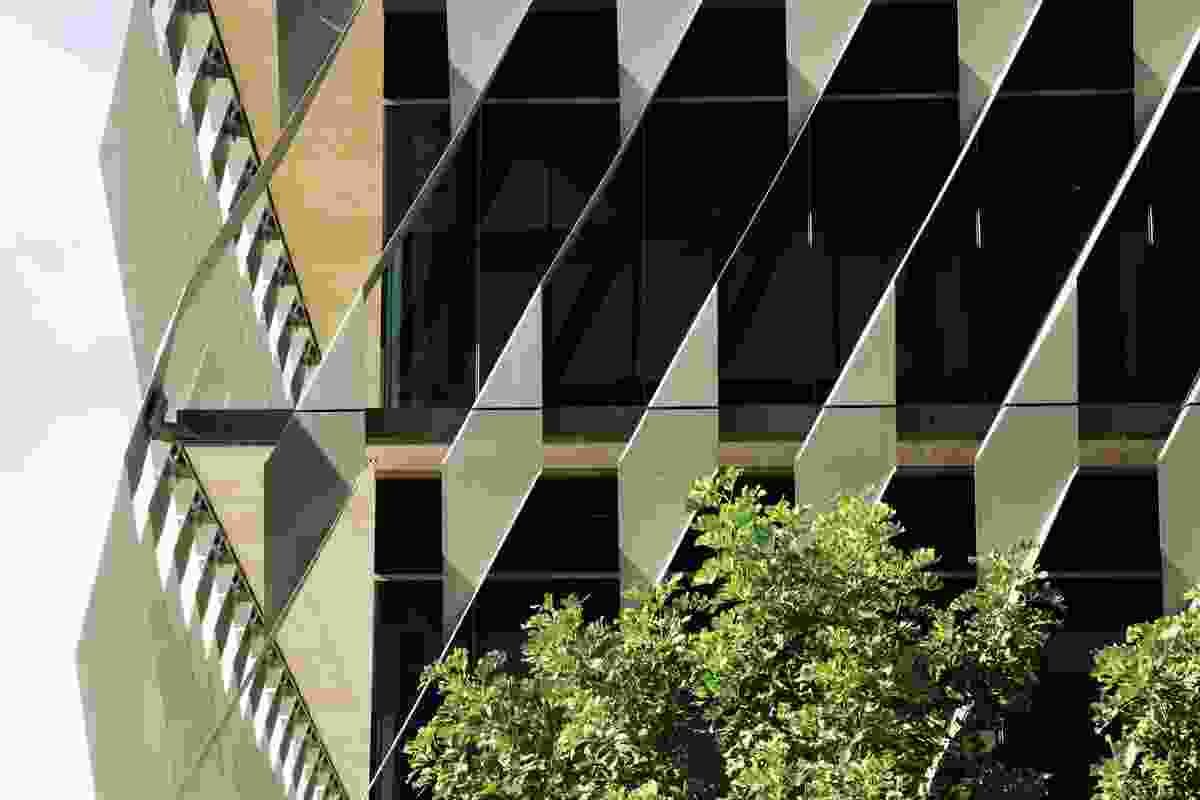 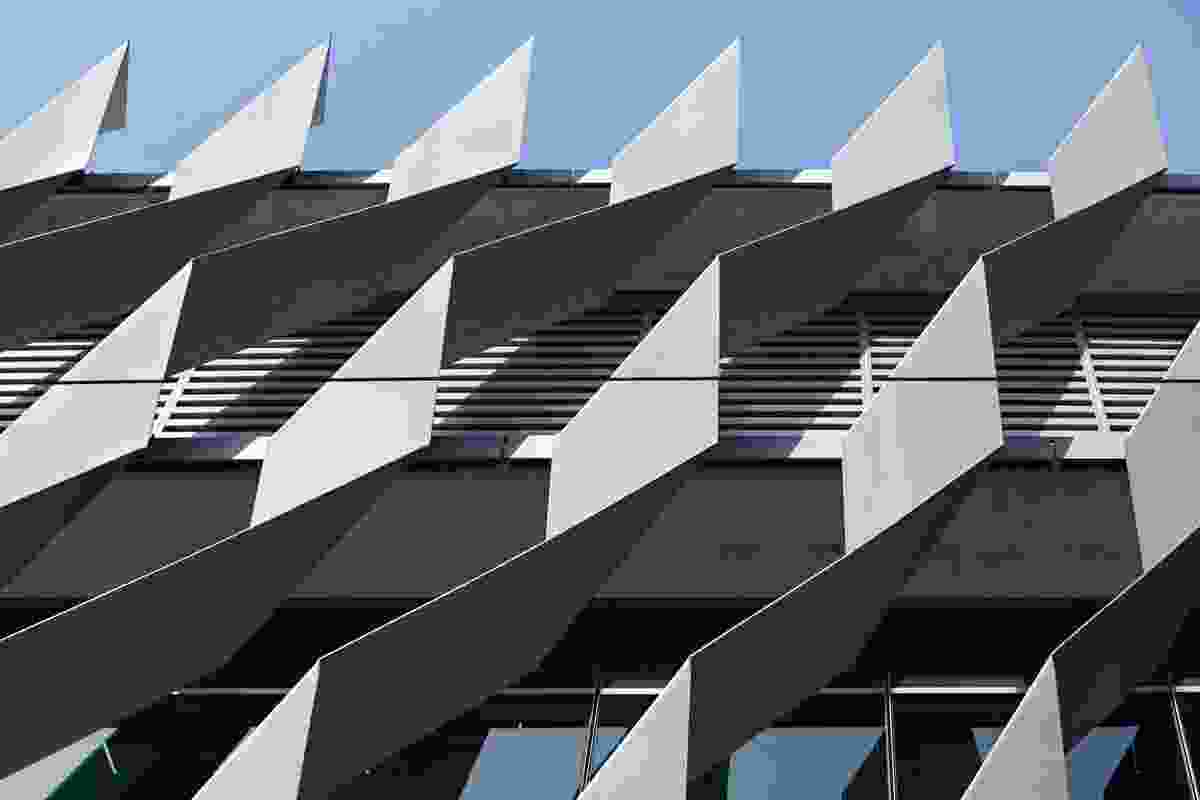