Drawing lessons from early modernism, Richard Kirk Architect and Hassell create a new education facility at the University of Queensland that integrates multipurpose teaching and research spaces in a model exploring programmatic congestion. This review from Architecture Australia Jan/Feb2014.

The Advanced Engineering Building, viewed from the north, showing the glazed volume housing the studios.

What is the role of the architectural critic? Surely no more than to place a work in its canonical context and leave the reader to decide its merit?

In the contemporary university, research and teaching have parted ways. The emphasis (and money) is on research. To shield researchers from the mundane interruptions that come with interacting with undergraduates, a university’s best minds tend to be sequestered in research centres. Undergraduate instruction is the poorer for this separation. With research hidden away, intellectual leadership is absent and increasingly limited resources for teaching, intellectual discussion is curtailed; mobs of students are herded into darkened lecture theatres and force-fed a diet of facts and theory.

Unfortunately, in our essentially Anglo-Saxon cultural milieu, this “theoretical” approach to teaching is problematic. As Roy Landau noted, in the Anglo-Saxon cultural context, “most pervasive is the tendency towards empiricism. This long-standing attitude … encourages a love of facts, evidence, and being practical, which is combined with an open-minded pleasure to be sought from innovation, experimentation, and novelty …”1 Landau spoke of the long-established focus on the design project and the studio as models for both architectural practice and pedagogy. Other disciplines – particularly medicine – have come to appreciate this empirical congruity and turned to a new/old pedagogical model: problem-based learning.

The brief for the Advanced Engineering Building at the University of Queensland by Richard Kirk Architect and Hassell goes a step further: problem-based learning in multipurpose learning spaces (read: studios), with the faculty’s research laboratories in full view. The subtext of the brief calls for reintegration of research and teaching.

Such work on program precedes architectural form-making and is crucial to understanding the modernist project. In the 1970s, Rem Koolhaas identified a need for architects to resume unfinished work on program begun by the early modernists – notably Russian avant-garde architects – but prematurely abandoned for the formal modernist pursuit of the machine aesthetic (and more recently for an architecture of display). Koolhaas was particularly interested in Kazimir Malevich’s tectons – scaleless architectural forms devised to accommodate unimagined new social programs that the Russian Revolution anticipated. Koolhaas’s research also drew on the failed programmatic optimism of Manhattan in the early twentieth century. In Delirious New York he promulgated a manifesto for a “culture of congestion” in which programmatic synergies and potentialities arose out of unexpected and chance encounters.

Central to the design concept of the Advanced Engineering Building is this idea of programmatic congestion. The building is a hive of activity. In hourly bursts, as many as one thousand students drawn from all over the campus throng the building as they enter or leave the lecture theatre. The building straddles a major pedestrian route into the campus, which leads around the lake and up the northern side of the building. A sunny terrace cafe beckons, overlooking the lake at the southern end. Inside, the strands of the brief – laboratories, undergraduate studios, multi-use library-like study spaces, a five-hundred-seat lecture theatre, academic staff offices, cafe – gather and intersect along a grand atrium-cum-galleria-cum-concourse. Most activities are on view from the concourse: engineering students in studios, students and seminar groups in study spaces, academic staff toing and froing between offices and labs, and below, running the length of one side, the big materials testing lab with a massive crash-dummy concrete wall.

This nexus between type and program was the link between design concept and building form. In a similar vein, the design development of the Advanced Engineering Building underwent an architectural metamorphosis: from program, via type, into form.

For the early moderns, a type was a diagram to be freely borrowed from history and filled in and fleshed out with new programs. This nexus between type and program was the link between design concept and building form. In a similar vein, the design development of the Advanced Engineering Building underwent an architectural metamorphosis: from program, via type, into form. In this case, the galleria type (itself a nineteenth-century typological fusion of the atrium and street types) forms a light-filled spatial armature, an internal street that is an organizing spine of circulation.

In the early twentieth century, the introduction of space-liberating steel and concrete structures led Le Corbusier to formulate the concepts of the free facade and the free plan. Now form could follow function. For much of the twentieth century it did, so long as the form remained orthogonal. At the end of the twentieth century, architects discovered Deconstruction and realized they were not bound by orthogonality. Aided by nonlinear engineering principles, Deconstruction endorsed a new architectural heuristic encouraging an angular, non-orthogonal formal freedom. Its expressive potential is explored by the designers of the Advanced Engineering Building.

At the southern end, overlooking the lake, the “free” plan is introduced. In a move reminiscent of Aalto’s Seinäjoki Library (1963), the particular public spaces of the brief (lecture theatre and studios) break free of the orthogonal street/concourse lined with the interchangeable, cellular elements of the program. The arrowhead containing the studios soars out over the park landscape. Juxtaposed against the cacophony of the built context, this signals the building’s singular presence and the seminal significance of its studios.

The cellular elements are housed within a concrete frame. To the north side of the concourse are habitable spaces; to the south are laboratories (made flexible with a clear span of seventeen metres). The lecture theatre is a steel-framed glazed box with a roof of expressed timber trusses (the 225-tonne roof was preassembled on the auditorium floor and hoisted into place in one lift). Glazing throughout the building is supported on laminated hardwood mullions. Internally, all services are exposed. Walls and floors are generally lined with honey-coloured hardwoods. The exposed off-form concrete structure is satin-smooth and creamy white.

A high-tech array of service ducts forms the facade of the shaded southern (laboratory) side. On the sunny northern side, the glazed facade is screened by a wall of terracotta tiles. These tiles give the true measure of this building. They provide a scaling device and climate control.

The Advanced Engineering Building is designed to reduce annual energy consumption by more than 40 percent compared to the rest of the campus – largely through simple systems such as solar shading, cross-ventilation via the atrium using openable louvres and windows, employing the chimney effect of the atrium to exhaust hot air, ceiling fans and controlled daylighting. Technologically more sophisticated systems include high-performance solar glazing, a thermal labyrinth in the subterranean perimeter basement walls, computer-controlled mechanical shading to the atrium roof and mixed-mode airconditioning outlets at all workstations, individually operated during extreme conditions. Around the building, instruments monitor environmental performance for all to see. Particular attention went into limiting the carbon footprint through extensive use of renewable materials.

We are reminded here of Le Corbusier, the most articulate protagonist of the modernist project. Writing in 1921, he saw “the problem of the house” as “a problem of the epoch.”2 Consider his call to action then, but cast now in the context of global warming and the climate crisis: “A great epoch has begun. There exists a new spirit … The problem of the house [environment] is a problem of the epoch. The equilibrium of society today depends upon it. Architecture has for its first duty … a revision of values, a revision of the constituent elements of the house [carbon-neutral built environment] … We must create … The spirit of constructing mass-production houses [carbon-neutral buildings]. The spirit of living in mass-production houses carbon-neutral buildings … healthy (and morally so too) and beautiful in the same way that the working tools and instruments which accompany our existence are beautiful.”3

The modernist project – with its potential for social consciousness, invention, experimentation, rationality and poetics – is alive and well in Queensland and still remains far from complete. 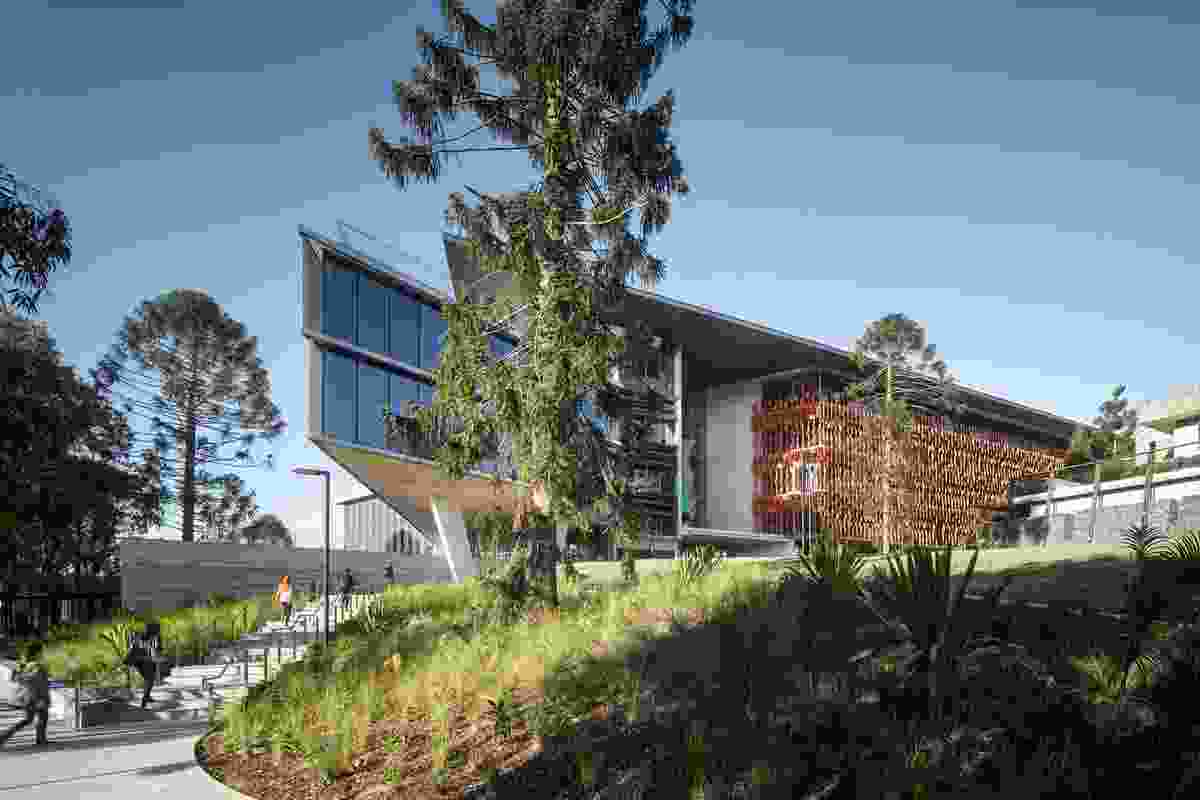 The Advanced Engineering Building, viewed from the north, showing the glazed volume housing the studios. 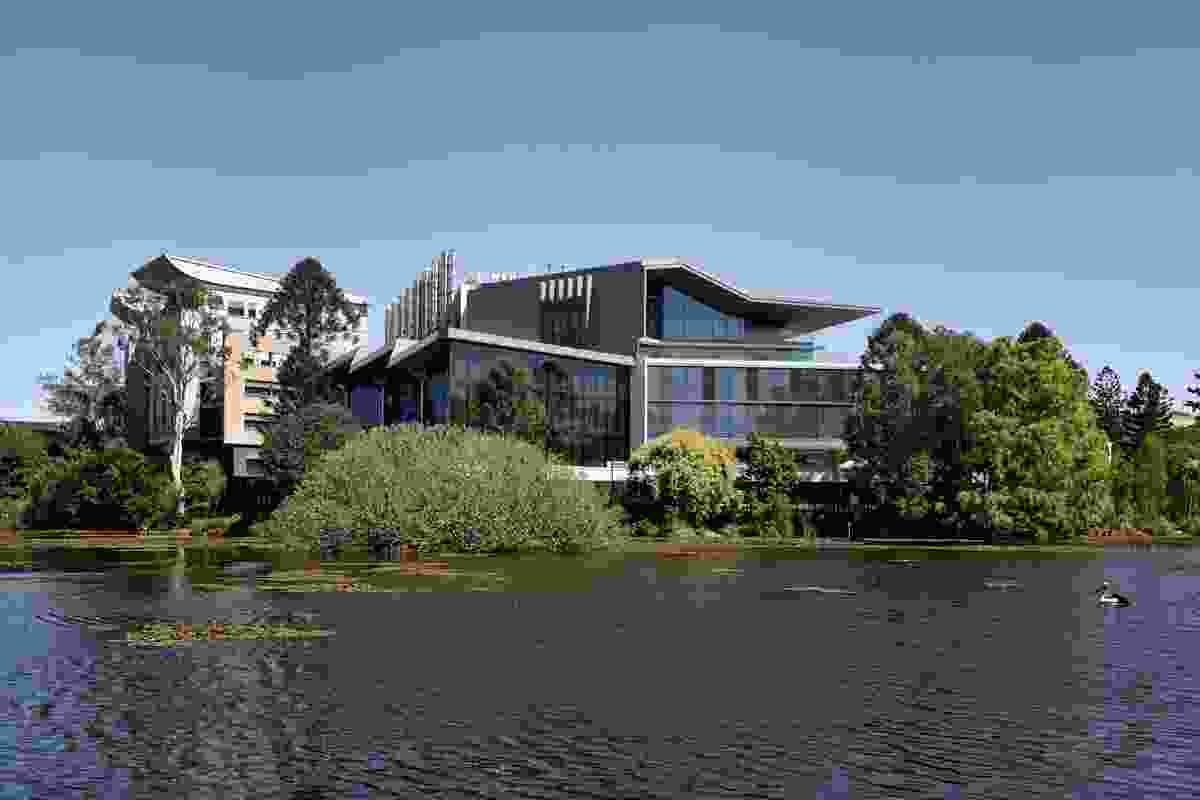 At the river’s edge, the studios and lecture theatre are contained within two volumes that break free from the orthogonal plan. 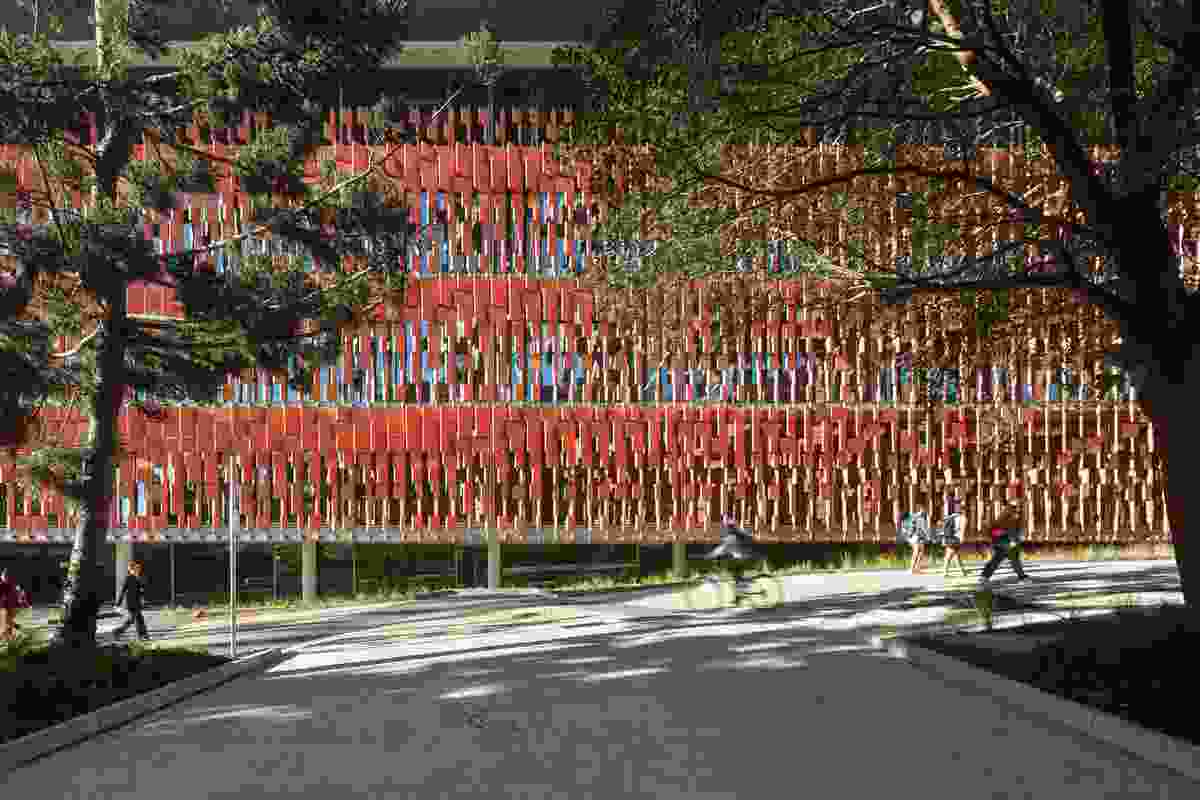 Terracotta tiles on the building’s northern edge serve as solar shading and provide a scaling device. 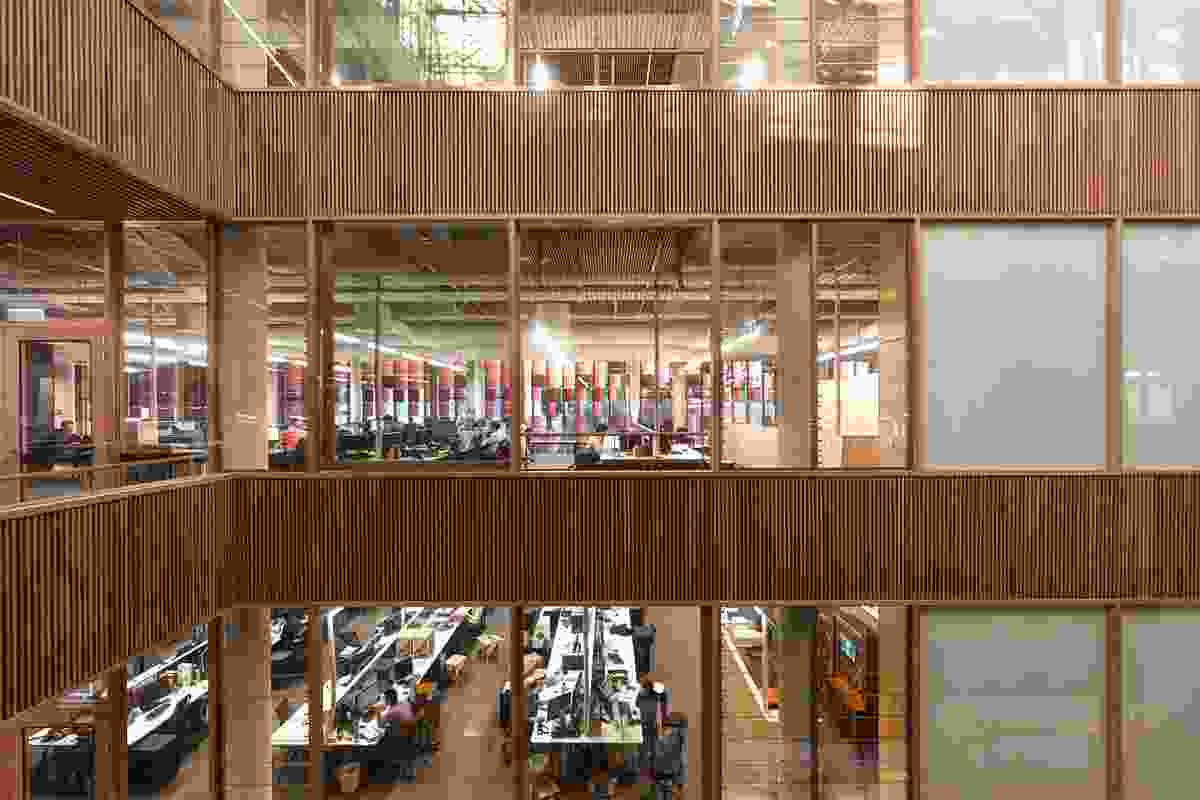 The multipurpose learning spaces are in full view of research laboratories. 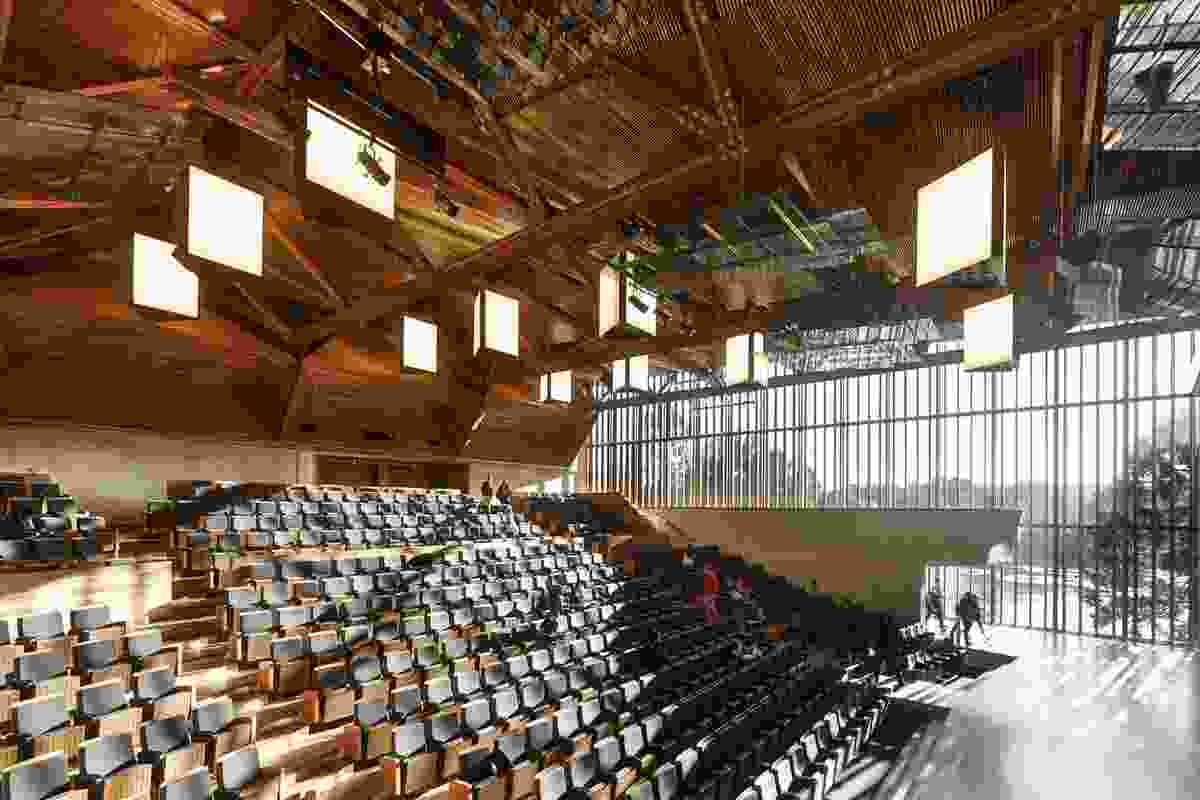 The 500-seat lecture theatre, with a roof of exposed timber trusses. 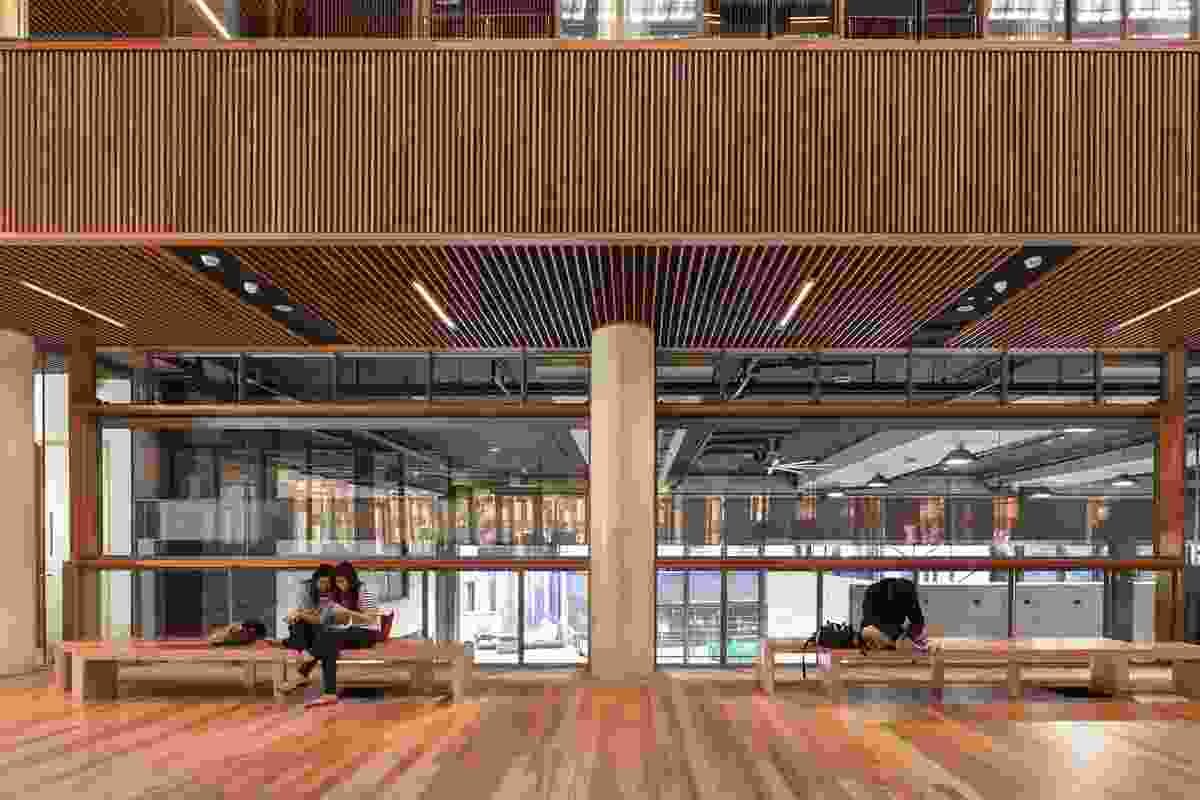 A central concourse connects the various functions of the building and fosters a notion of “programmatic congestion.” 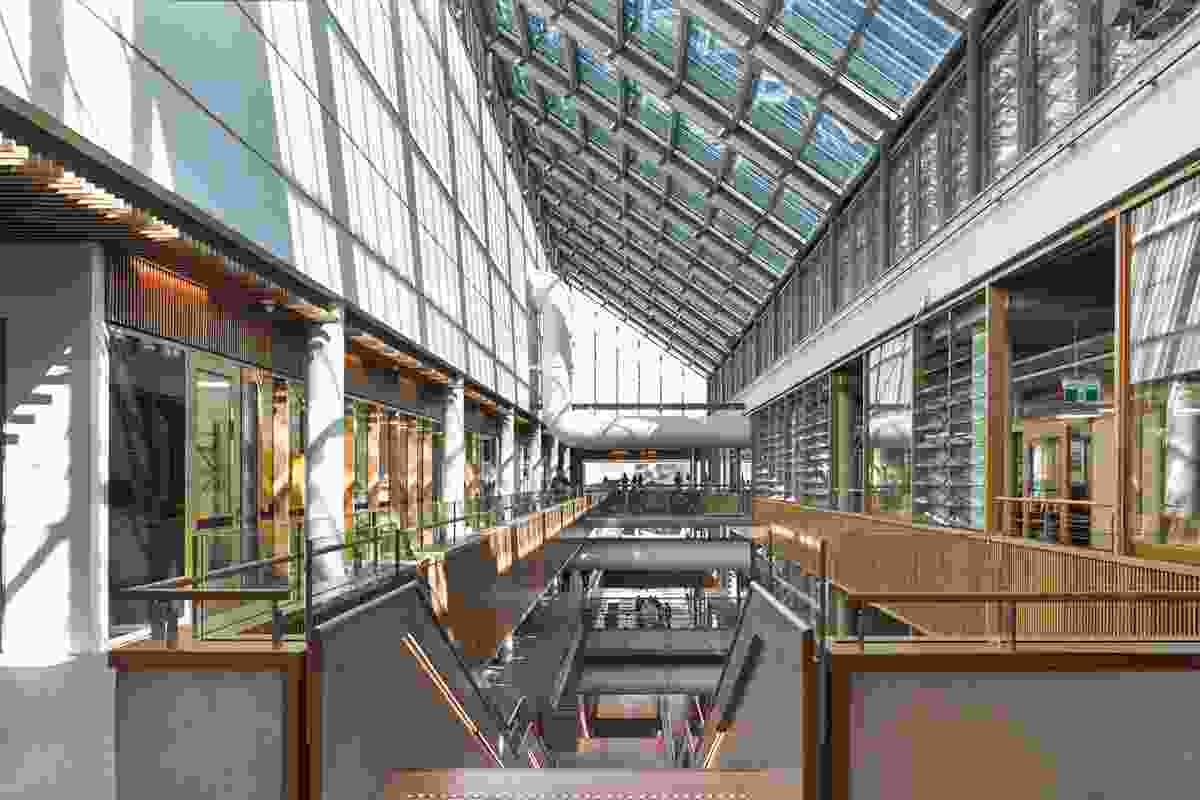 Operable louvres in the atrium assisting in creating cross-ventilation throughout the building. 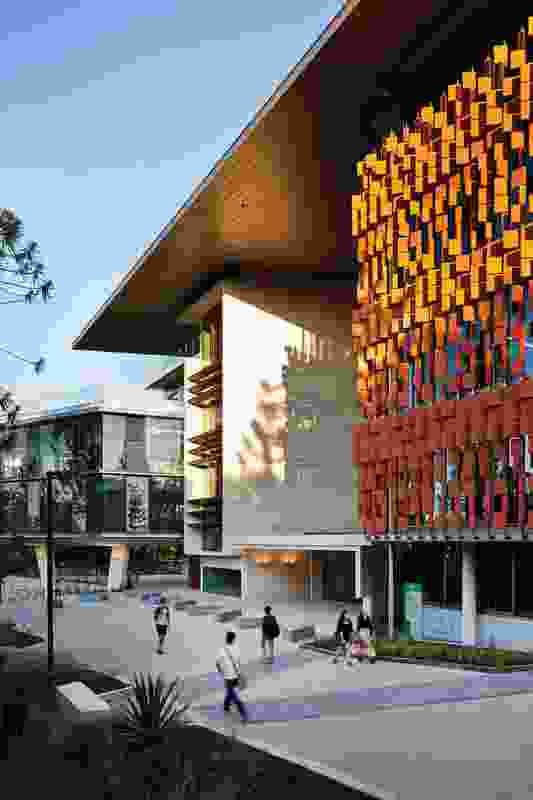 A major student thoroughfare skirts around the edge of the building. 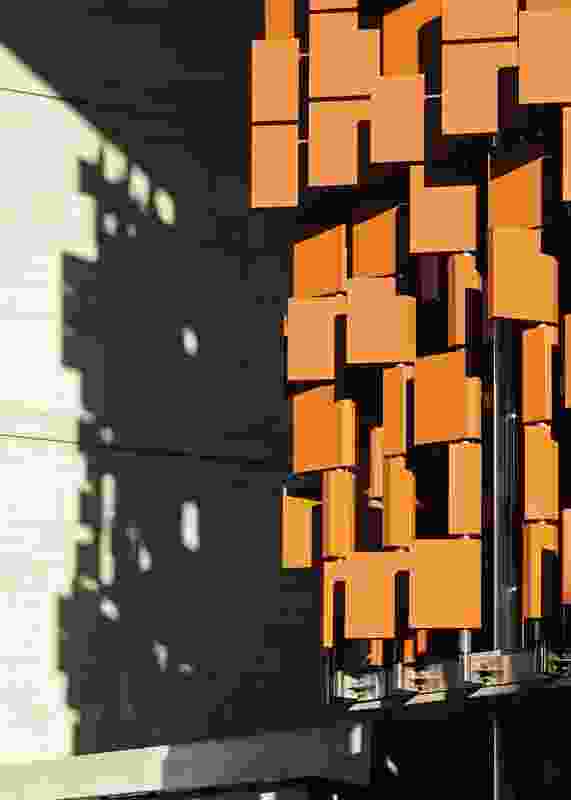 Detail of the terracotta tiles on the northern facade. 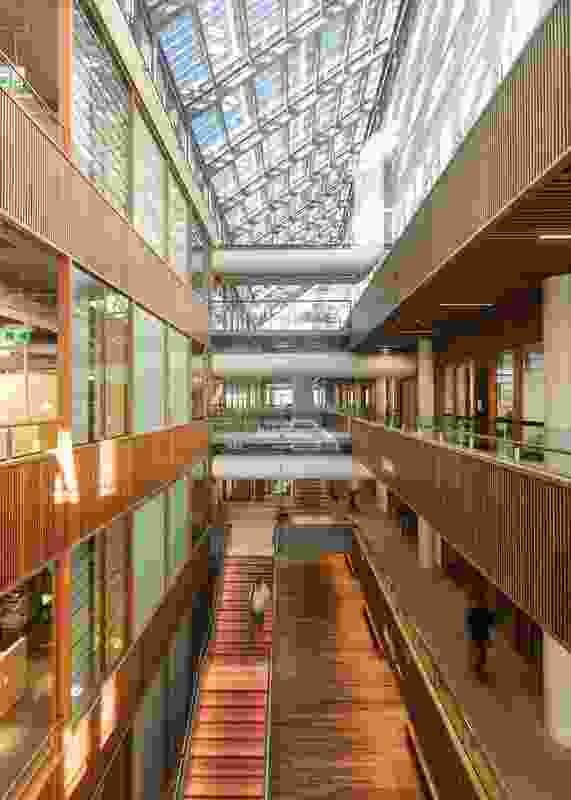 Teaching, office, laboratory and study areas are all connected by a central circulation spine. 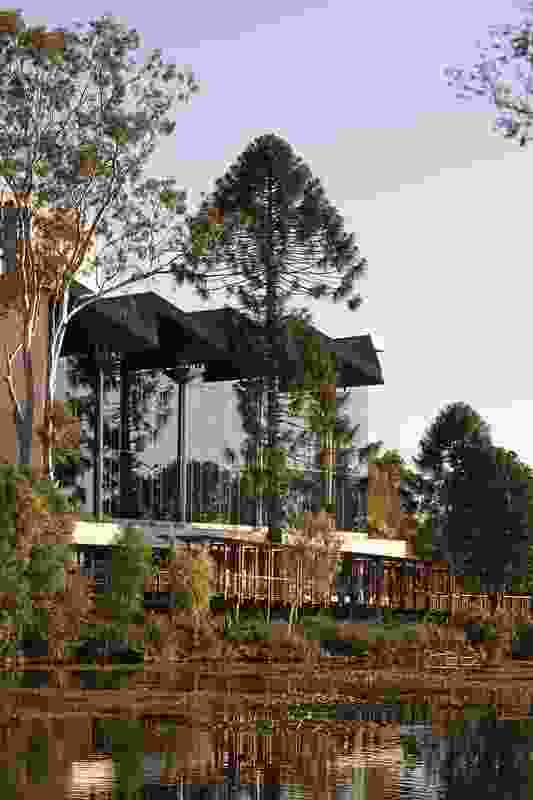 The glazed volume containing the lecture theatre poised above the Brisbane River.