Joao Barroso from the Adjaye Associates and BVN team.

To really appreciate architecture, you may even need to organize a forum.1

Competitions like the one for Adelaide Contemporary deliver as many ideas as heroes. Architects including David Adjaye, Charles Renfro, Jing Liu and Bjarke Ingels recently presented their concepts for a new gallery for the Old Royal Adelaide Hospital (ORAH) site – with a mythical primal house, a super-lobby, an open circle and a serpent among the proposals.

But how does one judge a building before it is built, and can we judge architecture on image alone? Like Bernard Tschumi’s ‘Advertisements for Architecture’, can the desire for experiencing architecture emerge from its advertisement? This was the opportunity presented by the Adelaide Contemporary Forum at the School of Architecture and Built Environment at the University of Adelaide, which brought together four of the six2 shortlisted teams in the Adelaide Contemporary International Design Competition, organized by UK-based Malcolm Reading Consultants. The competition had tasked entrants with designing a proposal for a $250 million gallery on the ORAH site, which adjoins the Adelaide Botanic Garden on North Terrace, the city’s main cultural boulevard. In the opening words of moderator Julian Worrall, the competition is significant on three accounts: “The ambition of the project, the innovation of the process and the sensitivity of this particular junction.”

The project’s arrival in a public forum has been subject to a lengthy political oscillation. Following the failure of a $1 billion scheme involving a private consortium to redevelop the ORAH site in September 2017, the then-South Australian Labor government once again took control of the site with an election in sight. A design competition for Adelaide Contemporary was quickly announced to significant public and professional fanfare, generating 107 teams made up of 535 individual entities from around the world that had registered interests.

The six shortlisted teams visited Adelaide in January 2018 and this continued to build excitement for the competition (no doubt aided by Bjarke Ingels Instagramming his time exploring the city). However, since the state election in March 2018, which was won by the Liberal party, public energy around the project has retreated as quickly as it formed.

Within a changing political context, the competition regained momentum when the Art Gallery of South Australia opened an exhibition of the shortlisted proposals. Images of the proposed galleries were reproduced again and again, triggering desire for something beyond representation itself. The meeting of the proposals in the forum allowed the competition’s multiple acts of creation to form a singular moment of becoming.

For an event celebrating participation, the majority of the forum was occupied by the voices of the competing teams’ local partners (Jing Liu of SO–IL a notable attendee). The diachronic nature of the proposals reflects the forum’s blurring of global and local boundaries. All succeed in critically considering how time is constructed in the notion of the “contemporary,” playing on the gallery’s namesake. These alternative temporalities can be organized around three notions: the eternal, the present and the flexible.

Eternal time was best captured in the massive scheme by Adjaye Associates and BVN, presented by Adjaye partner Joao Barroso. The proposed “mythical primal house” is a unifying work that is one-half shelter and one-half gathering space. Kaurna dreaming tracks frame the gallery space across city and country in “an attempt to synthesize between two different ideas of territory.” The proposal encourages an Indigenous program: a fire pit allows smoking ceremonies to guide visitors across ceremonial routes, while the traditional white walls of the gallery are replaced with dark, tactile surfaces. The bold exterior form is clad from a local marble noted for its severe tonal and colour discrepancies (it would be sourced from the re-opening of a local quarry in Kapunda, near the Barossa Valley). These decisions create a gallery that is at once stable and present, yet open and porous; a space rooted in timelessness, devoted to the revelation of country.

Contemporary questions of the present arrived in the super-lobby of the Diller Scofidio and Renfro and Woods Bagot proposal, presented by Woods Bagot principal Rosina di Maria. The three-level building of earth, land and sky is intersected by a (super-glossy) super-lobby that connects North Terrace to the park – a process of exchange facilitated by the building itself. The generosity of space acts as a platform, both literal and figurative, for engagement with the present through cultural incubation. The gallery’s intent is to capture multiple voices, making reference to the local typology of the verandah by providing shade, protection and inclusive social space.

This intent was also present in the multi-layered and multi-level proposal by Hassell and SO– IL, presented by Hassell principal Ben Duckworth and later discussed by SO–IL director Jing Liu in the panel discussion that followed the presentations. In their proposal, galleries in an open circle meet at the “Gallery of Adelaide,” a place connecting and collecting program as a shared space. The pursuit of the shared realm as an authorless collective is given form in the unidirectional array of the raised gallery spaces. The gallery speaks to the contemporary as having what Jing Liu called an “elastic geometry,” possessing the “possibility to draw that elasticity out of the boundaries of where we can go from history to the future – and how everything is stretched.”

Architecture as landscape arrived last with the proposal by Bjarke Ingels Group and JPE Design Studio, presented by Josephine Evans and Richard Kleinig of JPE. The serpent-like form of the gallery merges city and garden, combining art, community and public realm to create a single, logo-ready gesture of constituent pavilions growing from the ground. The shape (and speed) of time folds back on itself through the use of curves, where the notion of the eternal is reorganized by the collective dream world of a contemporary culture that embraces global image-making. Indeed, this theme was reaffirmed during the forum’s Q and A session. An audience member pointedly questioned the architect’s role as image-maker by comparing the similarities of the serpentine form to Bjarke Ingels Group’s 2013 competition-winning entry for the Museum of the Human Body in Montpellier, France. Yet, within the reproduction of this image, the night’s most critical discussion of the contemporary materialized – its notional conclusion provided by Worrall: “Time, as Nietzsche said, is all about the eternal return. The idea of an original and creatively fresh idea is a modern idea. Perhaps the eternal repetition of the same might actually be one way in which we can truly innovate.”

The Adelaide Contemporary Forum allowed the collision of the four presented proposals to perform a disjunctive synthesis between a quest for the new and a return to the familiar. What were advertisements at the start of the evening was architecture by its end.

1. Paraphrased from Bernard Tschumi’s Advertisements for Architecture, a series of postcard-sized posters that contained manifestos, juxtaposed with images. The original poster said, “To really appreciate architecture, you may even need to commit a murder. Architecture is defined by the actions it witnesses as much as by the encounters of tis walls. Murder in the street differs from murder in the cathedral in the same way as love in the street differs from the street of love. Radically.”

2. Not presented at the forum were the shortlisted proposals by David Chipperfield Architects and SJB Architects; and Khai Liew, Office of Ryue Nishizawa and Durbach Block Jaggers. 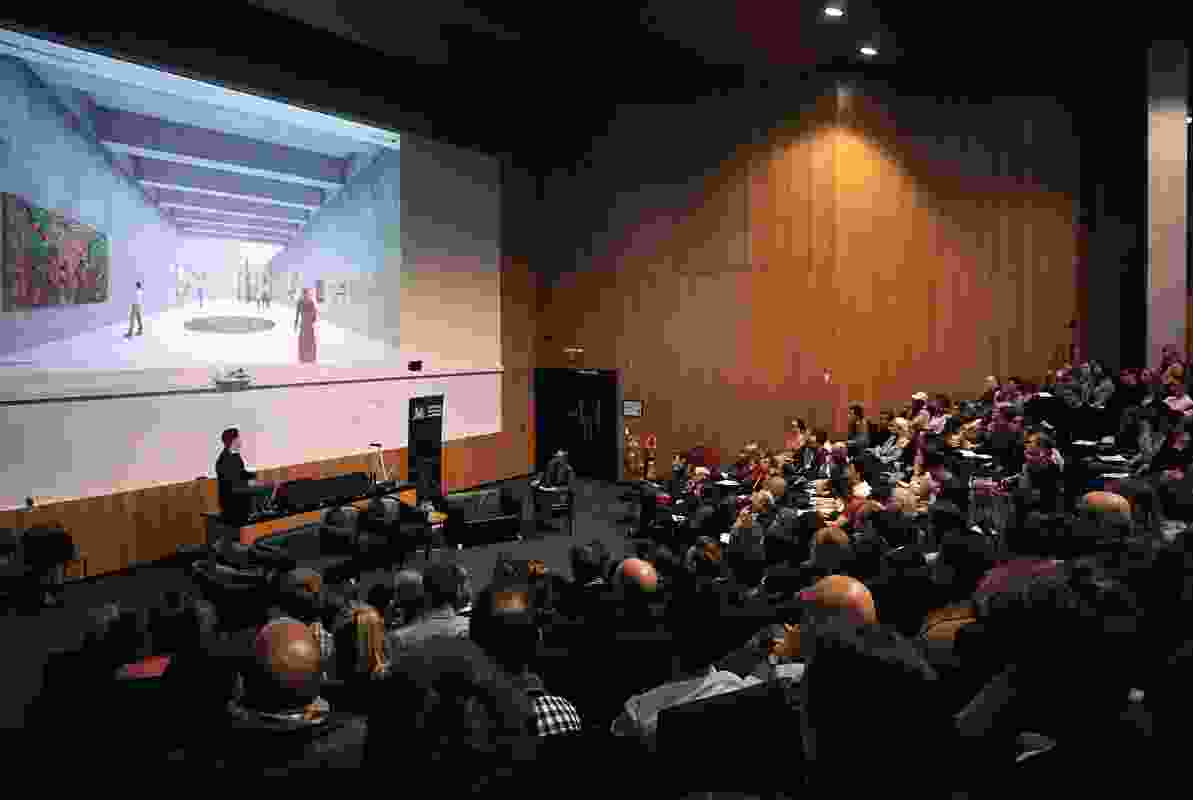 Joao Barroso from the Adjaye Associates and BVN team. 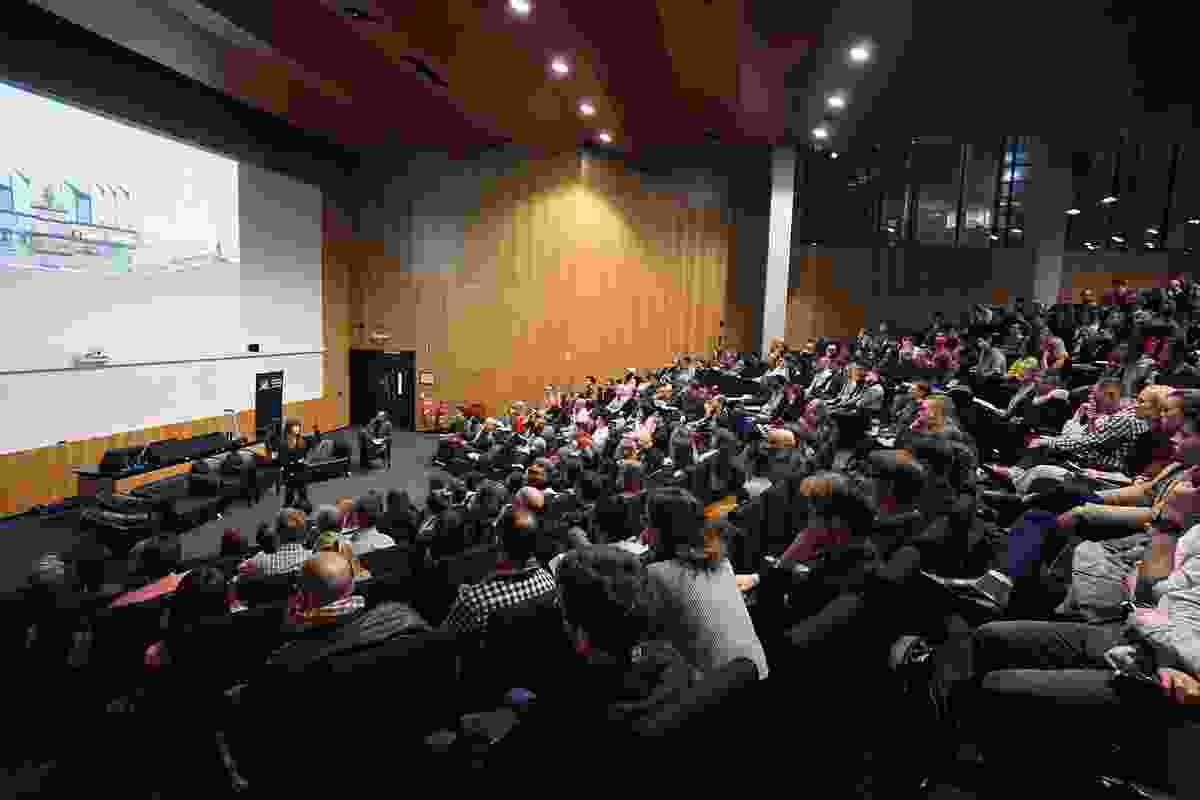 Rosina Di Maria from the Diller Scofidio and Renfro and Woods Bagot team. 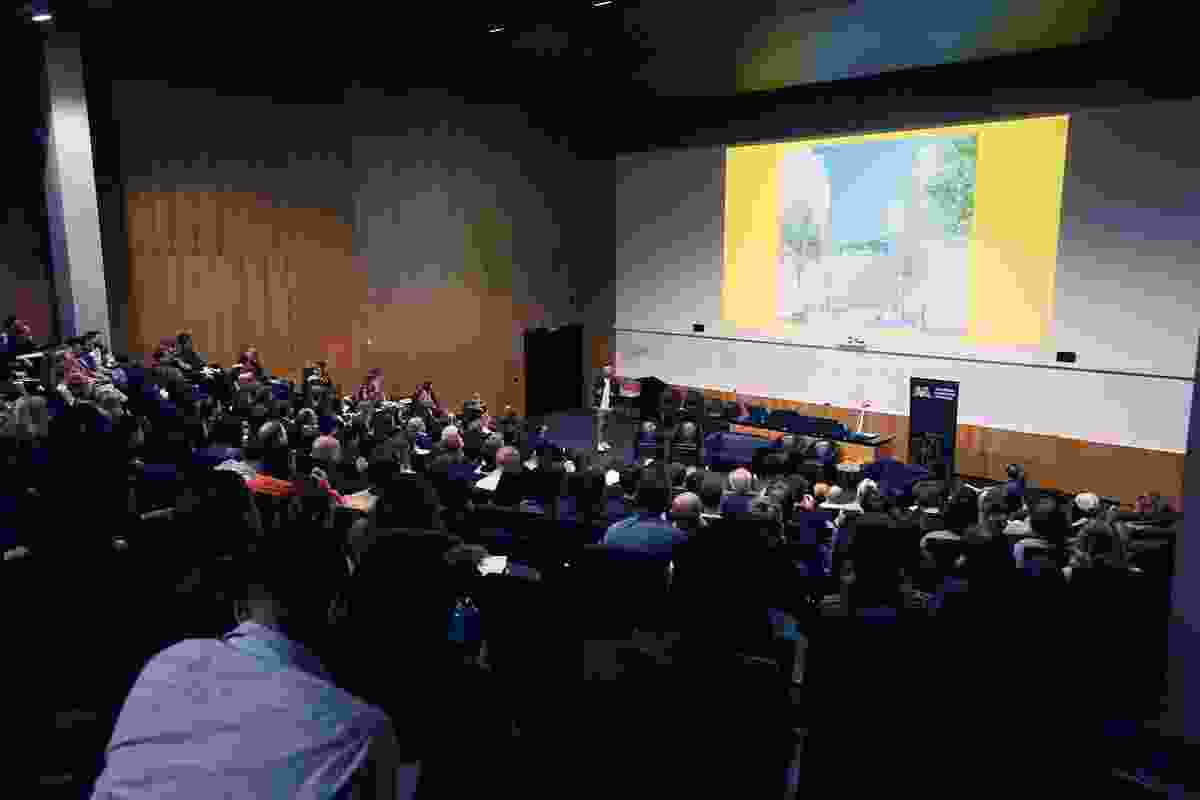 Ben Duckworth from the Hassell and SO-IL team. 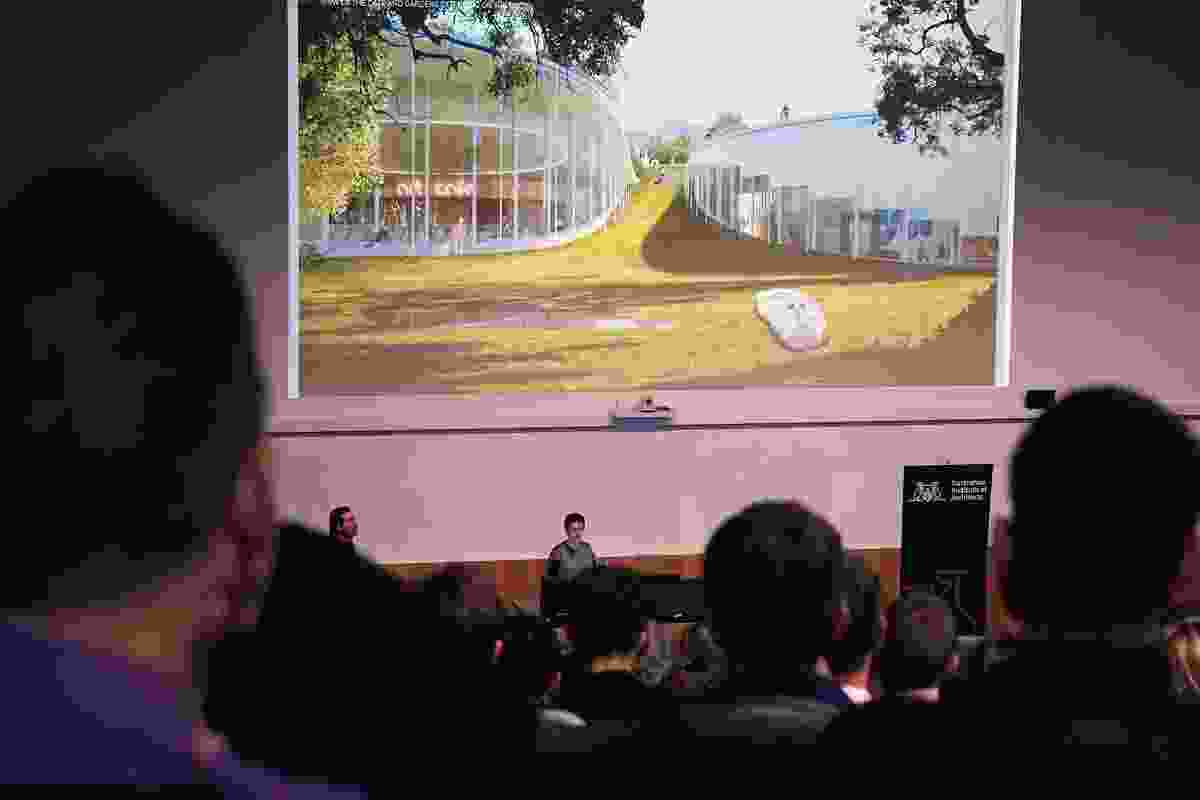 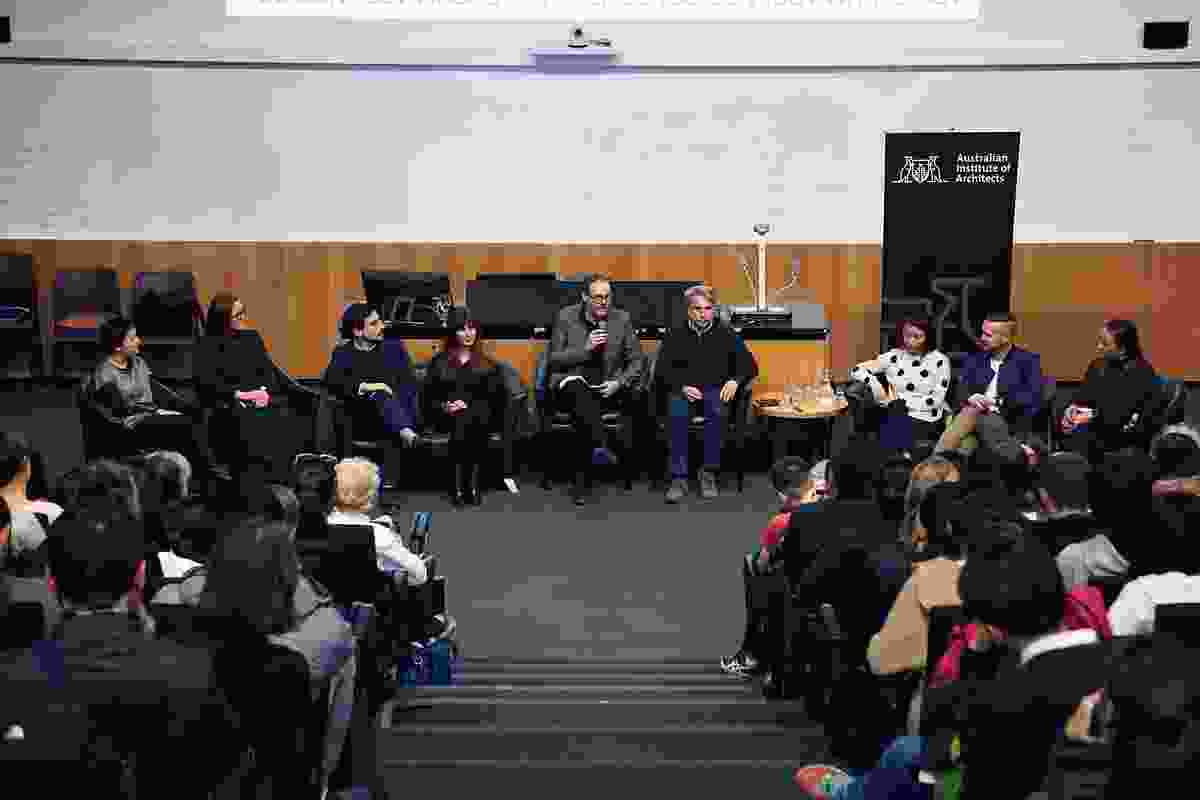