This new Sydney terrace by Matthew Pullinger Architect challenges conventions and plays with traditions, while engaging seriously with the street and community life.

The architect rejected a car spot, retaining a large frangipani tree at the front instead.

The “antipodean terrace” is a term used to describe the Victorian terrace remade for Sydney’s climes. The conversion is usually a process of internalizing services that once plugged the rear of the house, allowing the house to embrace the green and the prospect beyond. Matthew Pullinger’s Alexandria Courtyard House, a six-and-a-half-metre-wide home that expands to seven and a half metres wide, is an interesting addition to this conversation. It challenges a few ideas about how to make an “antipodean terrace,” while reaching back to a time of greater community involvement by placing the public room of the house facing the street.

It also challenges the idea that a courtyard can only face north. Here, the design revolves around a generous internal courtyard, opening onto it on all three sides. But this courtyard faces south. While the north provides good light, rarely is there a discussion about the value of good shade. Sydney is much more a cooling proposition than a heating one. It’s cool for three months, ideal for six and hot and humid for another three. Matthew understands this, allowing his public rooms to operate as morning or afternoon rooms, while the central courtyard, the main living space, is proportioned well enough to receive some direct light, but also the lovely diffuse light of a big southern sky.

This house also disobeys the one-bathroom-per-person rule that seems dominant in residential architecture today. Matthew’s house has one bathroom and a toilet. His family of five shares the generous bathroom upstairs, while a toilet downstairs services the living spaces. On a tight site too many bathrooms is simply too many. I like this idea and it invokes a communal spirit that is carried throughout the house.

The placement of the living room, the public room, facing the street is a wonderful urban response. It says that the street is important and that the community matters. While I was at the house, neighbourhood children were there, playing happily. As I was leaving neighbours popped in, in what seemed a Sunday ritual. The design of the house was supporting this. It felt right. Not that it is eternally open and on display. Weathered external timber venetians can shut down the facades when privacy or solar protection are required.

The public room fits seamlessly into the streetscape by taking its cues from neighbouring dwellings. Both the front and the rear of the house align perfectly with the adjoining houses. The front sits back from the boundary, creating a garden that could easily be a car spot. But it is not. Eschewing the car in favour of a large frangipani tree is a generous gift to the street, while giving the family a front garden to play in.

The front door sets an axis that is rigorously followed throughout the house. In fact, the word rigour comes to mind frequently. The highly organized plan and the constricted circulation space work seamlessly; this house is like a swan gliding across the water. It seems effortless, but the legs are energetically paddling below.

Thick service walls line the edges of the house where it touches boundaries on either side. These service walls anchor the rooms they serve with whatever storage or functions are necessary, detailed at the edges with generous shadowlines that hide curtains and lights. They also serve to subtly straighten the angled boundary. At the back of the house, a third and private courtyard is anchored by a clever two-metre-deep studio as active fence.

Sleeping is on the upper level, the kids to the west and the parents to the east of the courtyard. With doors that pull away, the bridge between rooms becomes a balcony to the internal courtyard, again blurring the lines between dwelling and courtyard. It is here you realize that the retractable roof pulls over the external space, and understand that Matthew is playing with a Sydney version of the outdoor room.

As we are leaving, I am shown the construction documentation. The impression of rigour is confirmed in an extraordinary collection of drawings in which nothing has been left to chance. However, it is the understanding of the scale of the street, the scale of the person and the scale of the detail that I am thinking about as I ponder this home. The fact that this house works at all three scales so skilfully makes it not only good architecture, but richer and more nuanced. It is an architecture that lingers in memory, which for me is a true indication of success. 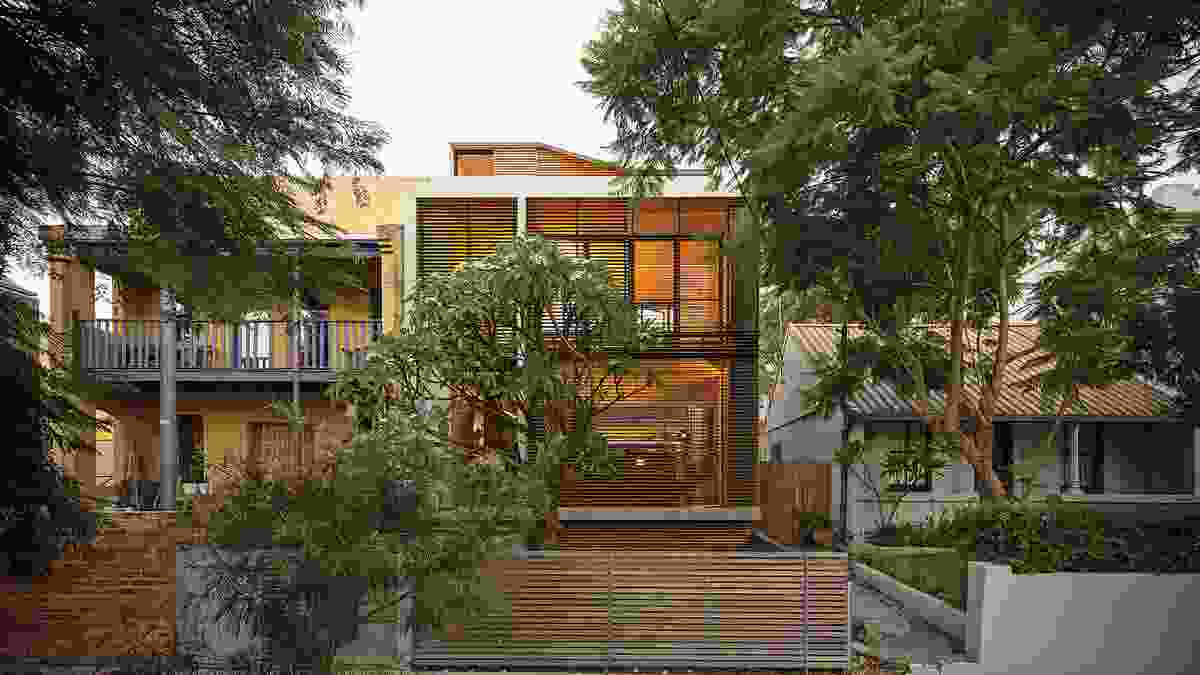 The architect rejected a car spot, retaining a large frangipani tree at the front instead. 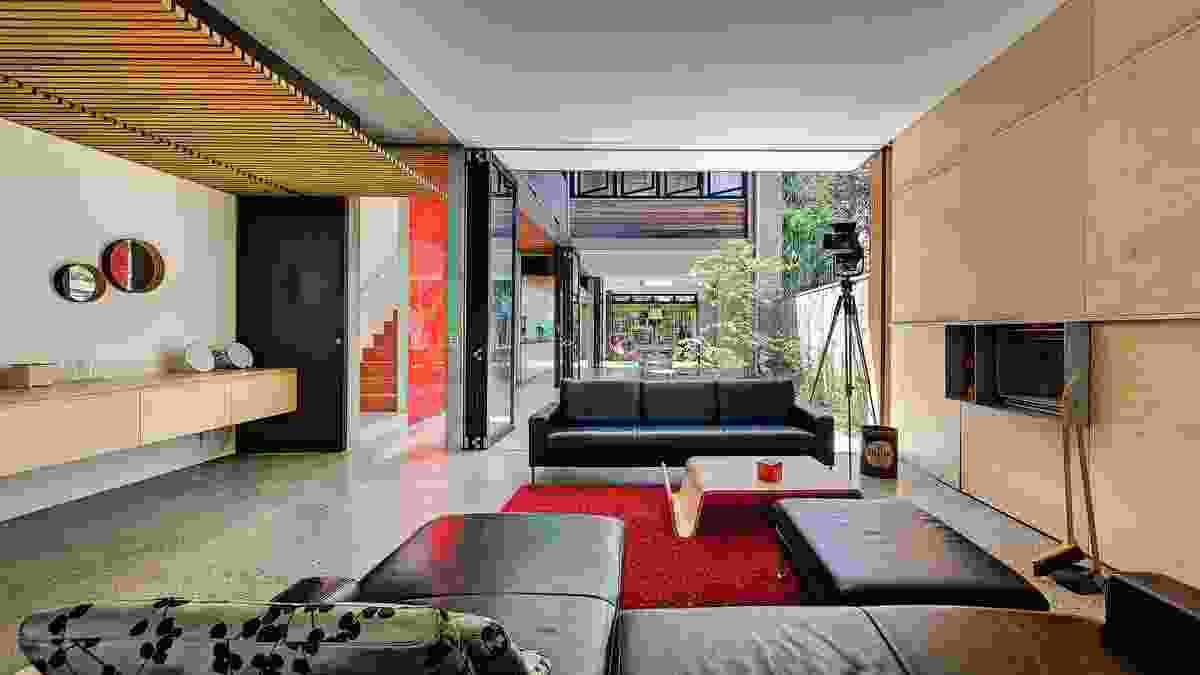 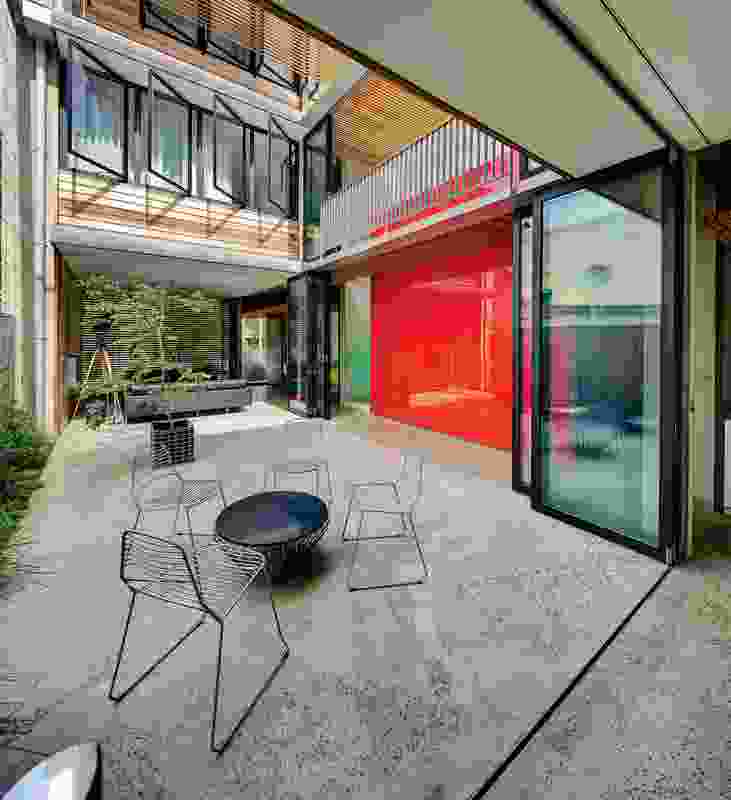 The south-facing main courtyard brings diffuse light into the house on three sides. 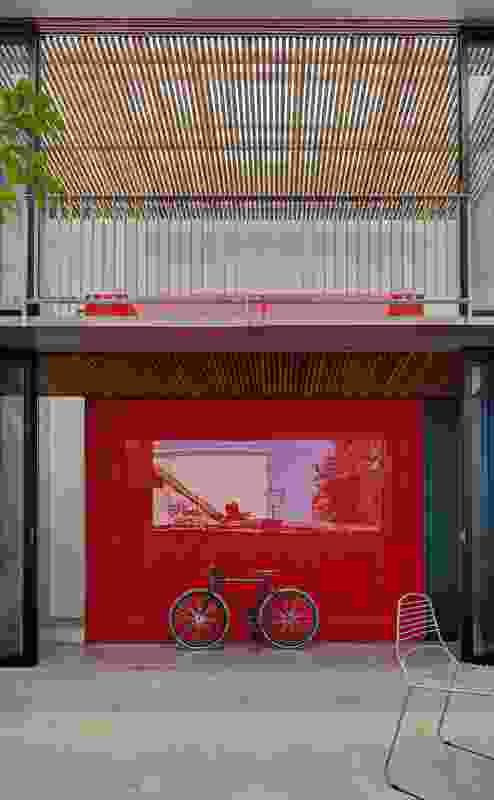 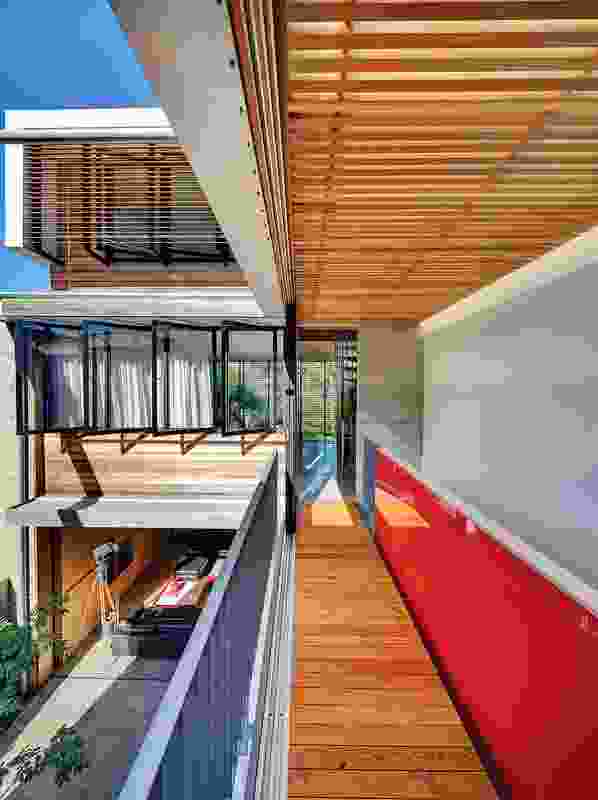 Doors slide back to turn a bridge between bedrooms into a balcony to the courtyard.

Placing the living room at the front makes a statement about the importance of the street. 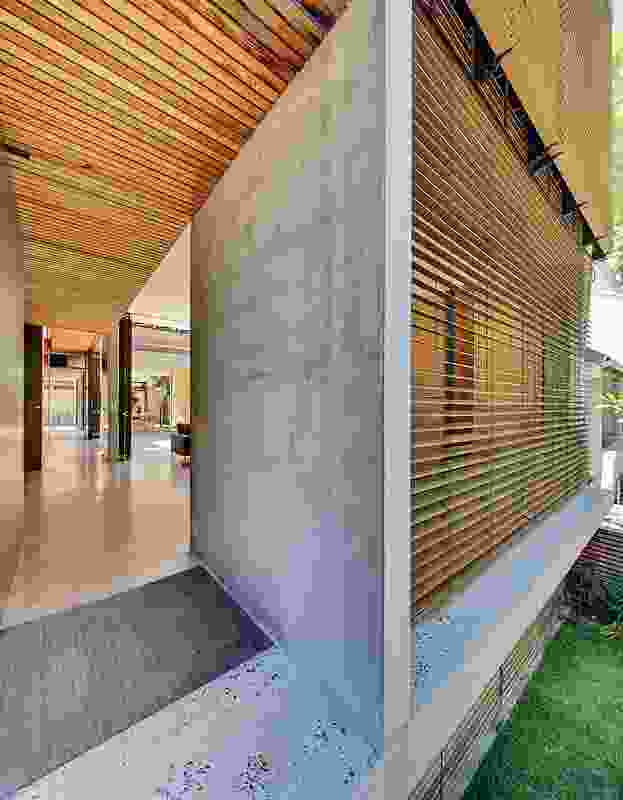 The axis set by the front door is followed rigorously through the long, linear house. 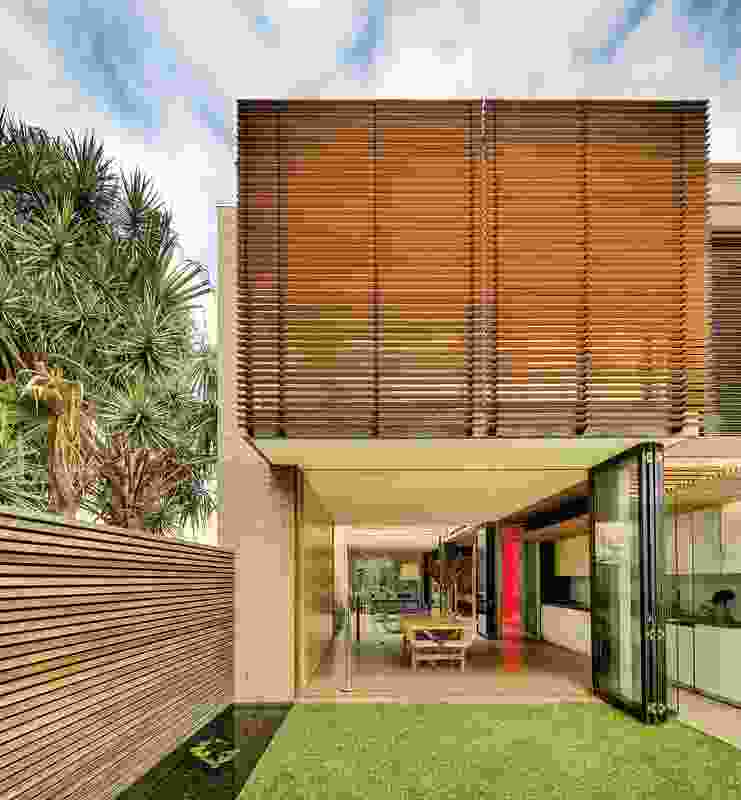 A third and more private courtyard space leads to the library. 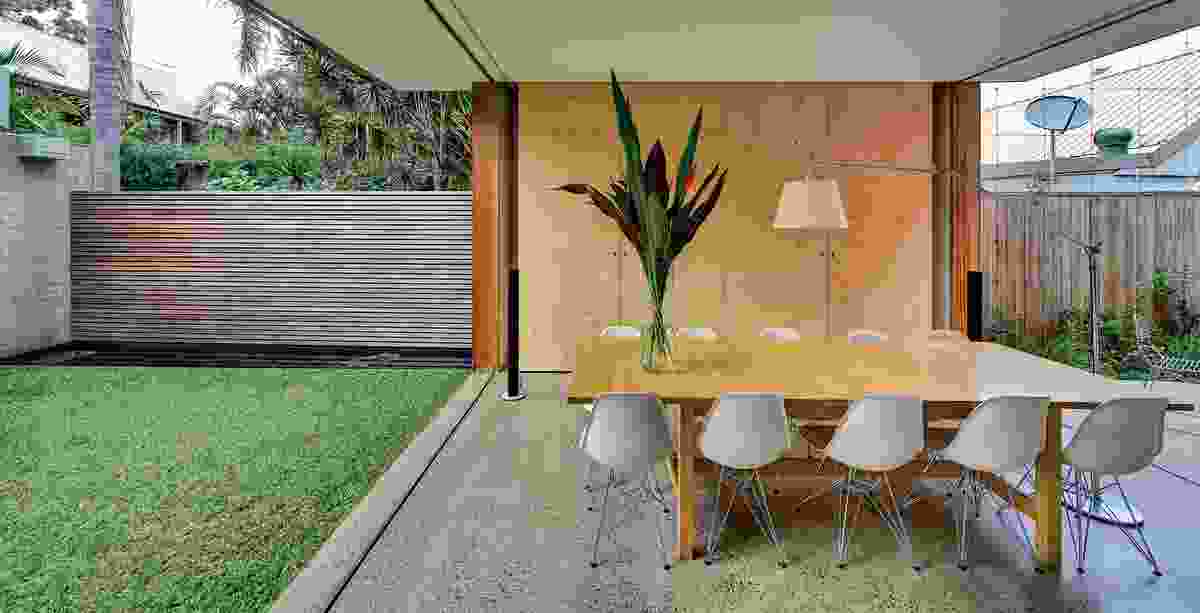 The highly organized plan allows the house to flow seamlessly from front to back. 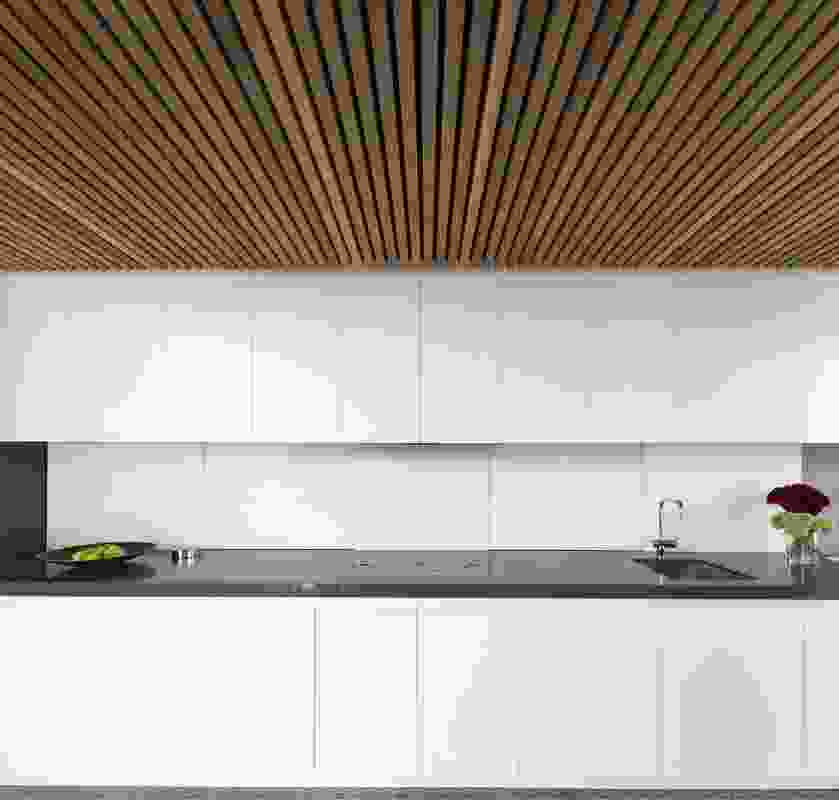 The minimalist kitchen runs along one edge of the dining space.