Edged by an established garden and crowned by an undulating concrete roof-form, this home for collectors on Sydney’s North Shore is a carefully cultivated expression in concrete and glass.

The bound pages of books in a study space sit against a transluscent wall. Artwork: Bill Henson

This is a new house on an old site. Tonkin Zulaikha Greer’s clients have lived here for many years, gradually adding to and refashioning the original house (which this new work completely replaces) to reflect their changing needs. In this sense, they have had the luxury of time shaping their brief, bringing to this exquisitely constructed Mosman house more than two decades of lessons about how they wish to live here.

Designed by Tonkin Zulaikha Greer’s director Tim Greer and project architect Belinda Pajkovic (now director of Atoma Architecture and Design), the house coalesces around three devices: a basic plan geometry designed to dissolve in response to the clients’ program; rigorously framed monumental concrete panels; and views controlled both to amplify and edit relationships between “moments” on a site that is made to seem more generous than it really is.

A spine runs through the project, from the threshold to the rear garden. To one side are service areas (including finely appointed bathrooms); to the other are zones for living in various degrees of privacy. The values that drive the way this house is resolved are described by the terminals of the spine: closest to the street, a rounded timber nook encasing a James Angus sculpture; beyond the house itself, a mature frangipani. This is a house for collectors set in concrete and glass, but also a house in a long-established garden – itself as carefully cultivated as it is verdant.

It is telling that the house turns its back on the street at ground level while embracing the north-facing view from the main bedroom on the upper floor. It has, in this sense, a somewhat defensive stance towards the public domain. Walking back from the main bedroom, two private studies (each with a distinctive character) speak with one another across a void. One accentuates the green of the garden with its striking carpeting – indeed, viewed across the timber landing, the timber furnishings sit as though on a pristine lawn. The other presents to the dining room below a kind of reversed library, with books visible across the void through a panel of glazing – an artful gesture, adding to this interior surface the texture of a wall of bound pages.

Outside, a section of mirrored glass extends the garden on the eastern facade, while another undermines the visual boundary between the kitchen and the south-facing patio on to which it opens.

The materiality is unambiguous. Everything we might touch is in timber, as is all framing. Large vertical surfaces are in precise, beautifully finished concrete. And large expanses of glass (extending to timber-framed retractable panels) ameliorate the concrete’s heaviness, moderating what we can see, and helping us to forget that this is, ultimately, a suburban home hemmed in by its neighbours.

Indeed, the program and orientation as expressed in the plan – reflecting the clients’ years of studying the site as much as the architects’ response to their brief – goes a long way toward avoiding reference to the wider setting. This house is in all respects a device for living, but in particular for living as the clients have found they wish to – with their wonderful private art collection, their mature garden, and their carefully selected decor; formally and informally.

In composition, though, TZG has given a subtle nod to the work’s suburban setting. The house is constantly caught between monumental and domestic scales – played out in composition as well as in its views. Even as it extends vertically to shape the dining and family rooms, a 2.4-metre dado runs throughout the house, with the effect of grounding it among its neighbours.

Artworks are cycled in and out, staged with a thoughtfulness that extending through the entire house, from its design to its inhabitation. Yet despite the depth and breadth of the clients’ collection, the house was not designed in conversation with specific works or even with a curatorial program. Instead, the large expanses of concrete and delicate timber elements serve to frame the clients’ own expert curation – an independent operation that activates (in different ways each time) the surfaces and geometries of the house.

The most notable gesture, though, is a massive undulating concrete form that hovers over the whole affair, reading as a trick of gravity. Its underside comprises the upper ceiling throughout and is delicately textured by the timber of its formwork. The curves of the waved form are less regular than a first glance suggests – dips and rises are manipulated to manage sunlight while responding, in composition, to the disposition of the rooms below. It speaks to the relational character of the entire project that a fragment of formed roofline is left as a future ruin in the garden, to be overgrown in good time.

Almora House is built on the land of the Borogegal and Cammeraigal people. 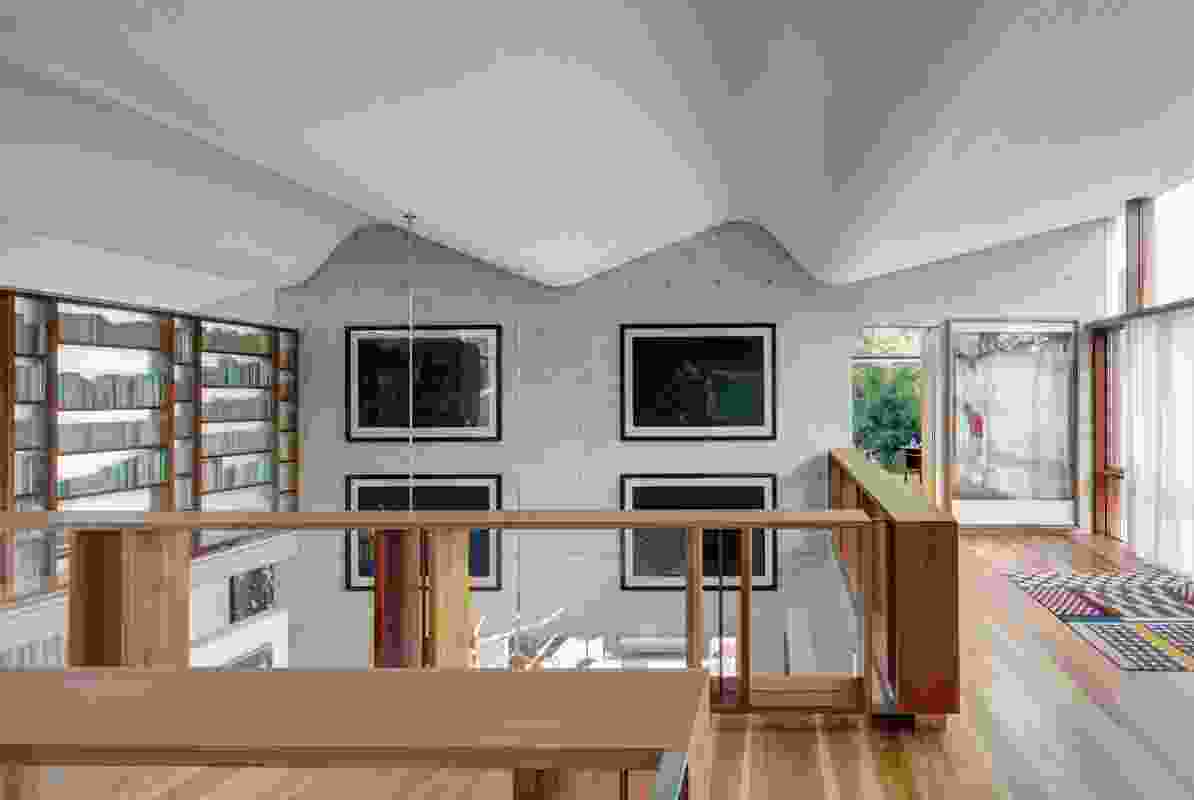 The bound pages of books in a study space sit against a transluscent wall. Artwork: Bill Henson 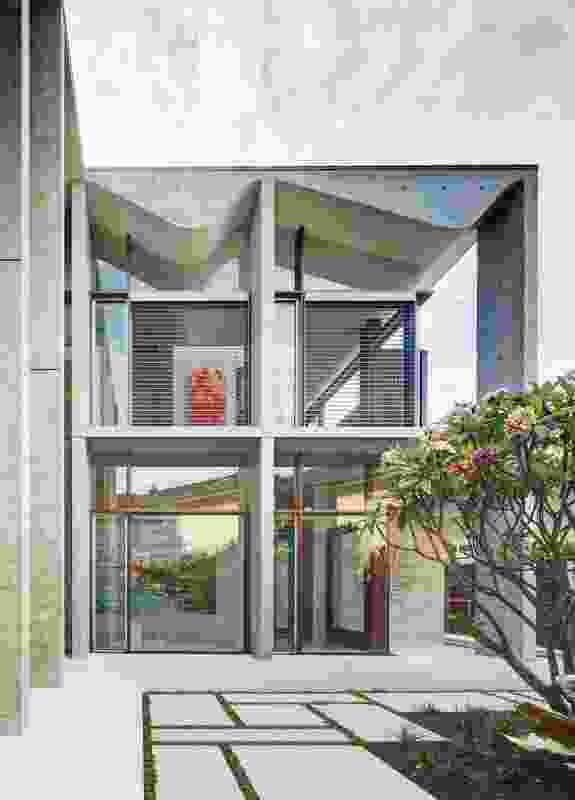 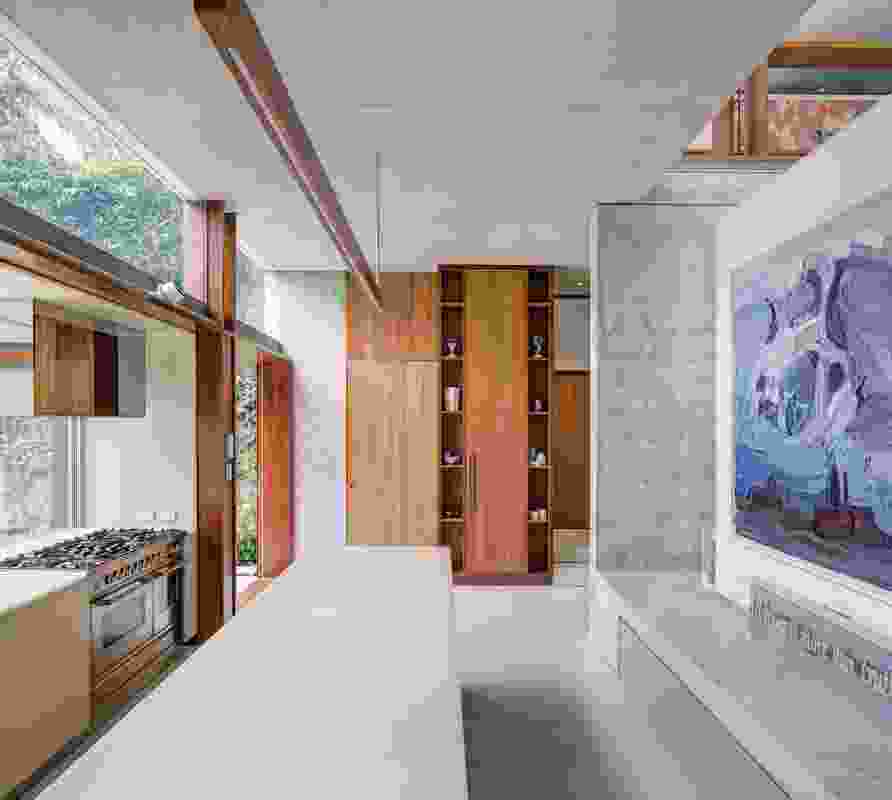 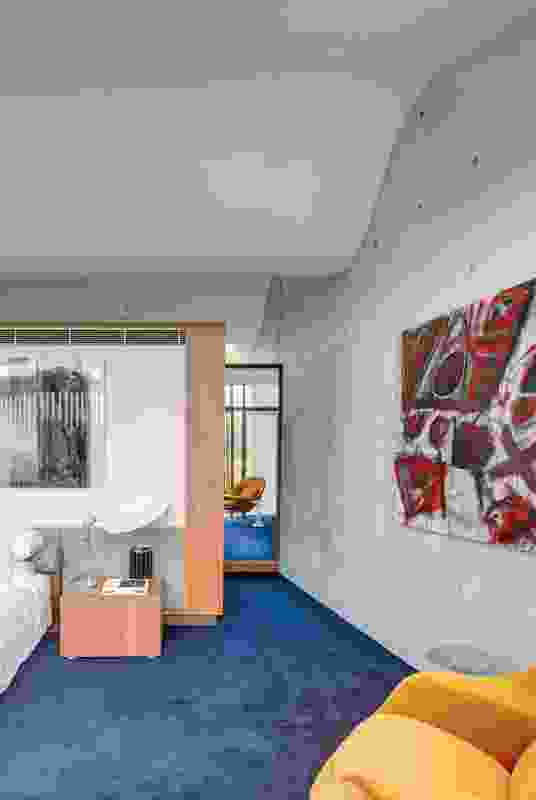