Amanda Levete Architects‘ (AL_A) 2015 MPavilion has been relocated to its permanent home in Melbourne’s Docklands Park, in a new section of parkland designed by landscape architecture firm MALA.

The pavilion can now be found in the new park at the corner of Collins Street and Harbour Esplanade.

At the end of its program in February 2016 at Melbourne’s Queen Victoria Gardens, AL_A’s pavilion had seen more than 76,000 people attend more than 400 events. The pavilion was gifted to the City of Melbourne by the Naomi Milgrom Foundation at the end of the program, and its new home in Docklands was announced in March.

AL_A’s design is inspired by forest canopies and reads as a series of delicate, petal-like shapes suspended on thin columns designed to sway in the breeze. The petals will serve as amplifiers, incorporating audio features as well as intricate lighting that will provide the pavilion with a glowing aura at night.

MALA recently created a masterplan for Places Victoria to transform the eastern portion of Docklands Park into a new recreational and cultural hub.

The relocation of the 2015 MPavilion marks the completion of the first stage of the masterplan. Materials familiar to Docklands such as concrete, steel and timber are counterbalanced with generous lawns and gardens that invite visitors to sit, eat, read, play and socialize.

The park’s designers wanted to design a landscape for the pavilion that allowed people to interact not only with the architecture but also the surrounding park as well, said Campbell Morris, director of MALA.

“The MPavilion is such a dynamic piece of architecture, it was important the landscape did not try to compete with it,” said Morris.

“One of our initial concerns was the MPavilion being set against the backdrop of Harbour Esplanade. The key design move was to create a tilted lawn and a modern ha-ha wall behind the MPavilion.”

A ha-ha wall is a design device used to create clear and seamless view lines within the landscape.

“In this instance we have used it [the ha-ha wall] to create a green background for the pavilion and provide an uninterrupted view to the western portion of the Docklands Park behind. The tilted lawn also creates a natural amphitheatre to the MPavilion,” Morris said.

The park features a new circular deck seat beneath a large 100-year-old peppercorn tree that Morris said was the single biggest asset in the otherwise dilapidated site.

“We worked closely with arborist Steve Fitzgerald to carefully design the seat, which now provides a protected place to meet, gather, sit, eat and read. Located on the prominent Collins Street corner, the new deck seat and concrete ribbon seat wall create a formal entry into the site,” said Morris.

The inaugural MPavilion, designed in 2014 by Sean Godsell Architects, was permanently relocated to the Hellenic Museum in Melbourne’s CBD in 2015.

Indian architecture firm Studio Mumbai is designing the next MPavilion, which is due to open in the Queen Victoria Gardens on 5 October 2016 and will remain until 18 February 2017. The 2016 MPavilion program has been released.

Studio Mumbai’s design will be the third of four pavilions in an annual series commissioned by the Naomi Milgrom Foundation. The series is inspired by London’s Serpentine Pavilion concept. 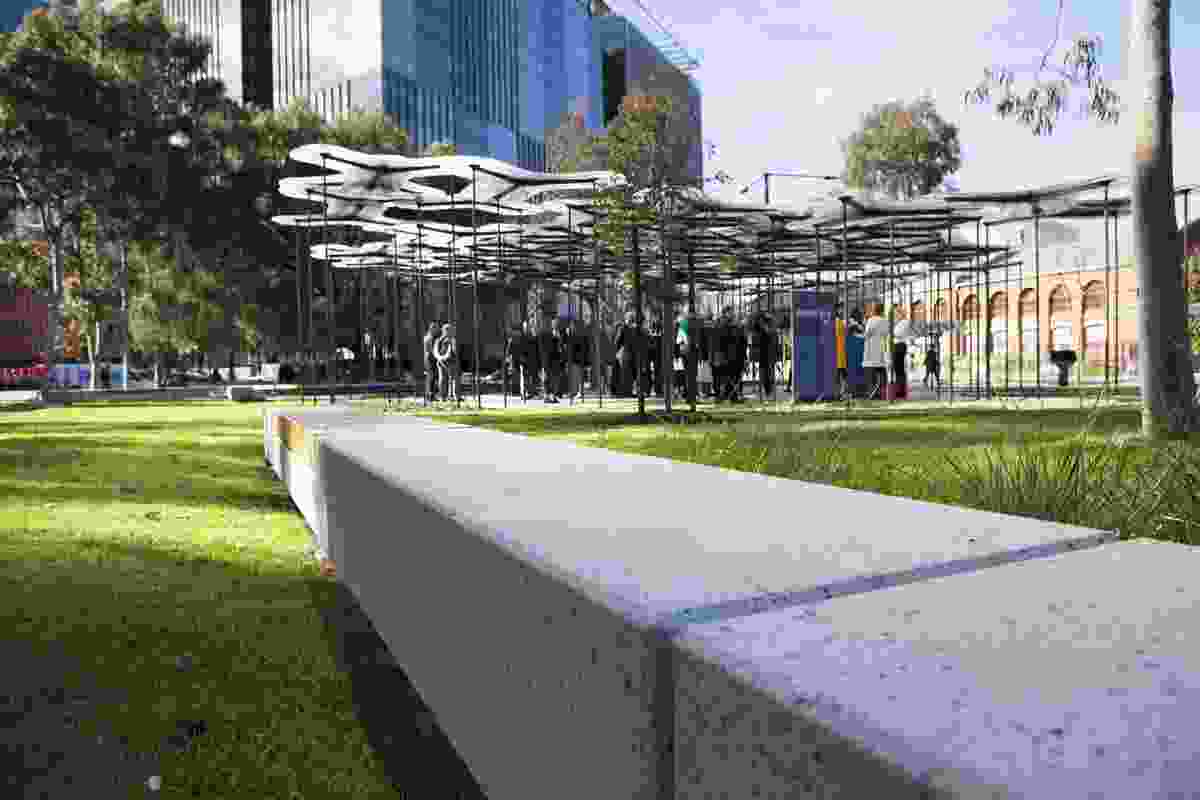 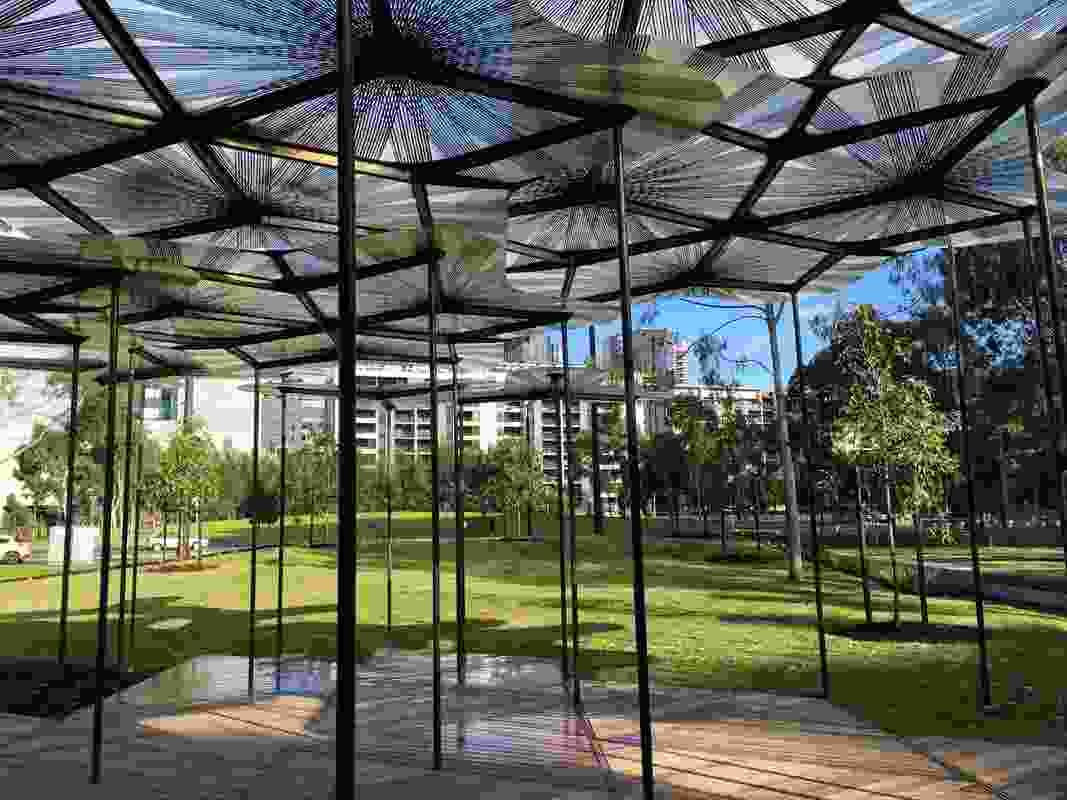 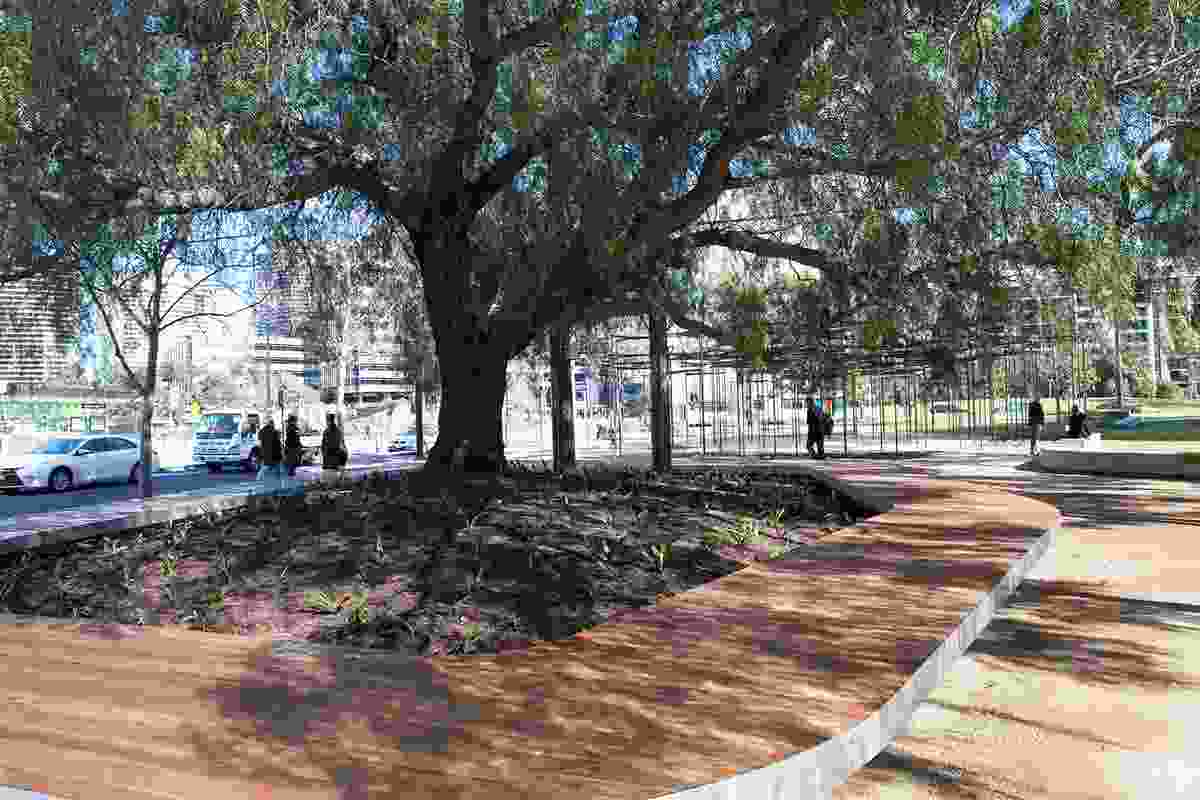 A new circular deck seat has been built beneath a large 100-year-old peppercorn tree in the park. 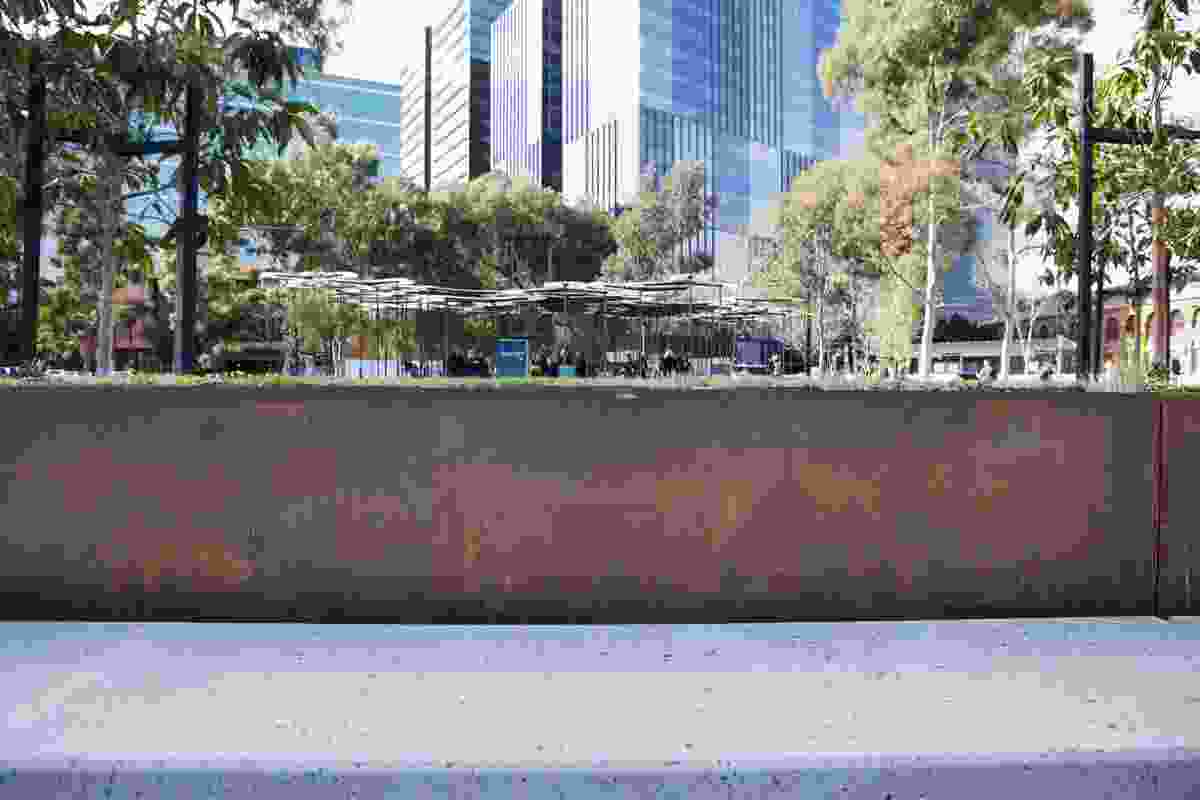 A ha-ha wall was used to create a green background for the pavilion and provide an uninterrupted view to the western portion of the Docklands Park behind. 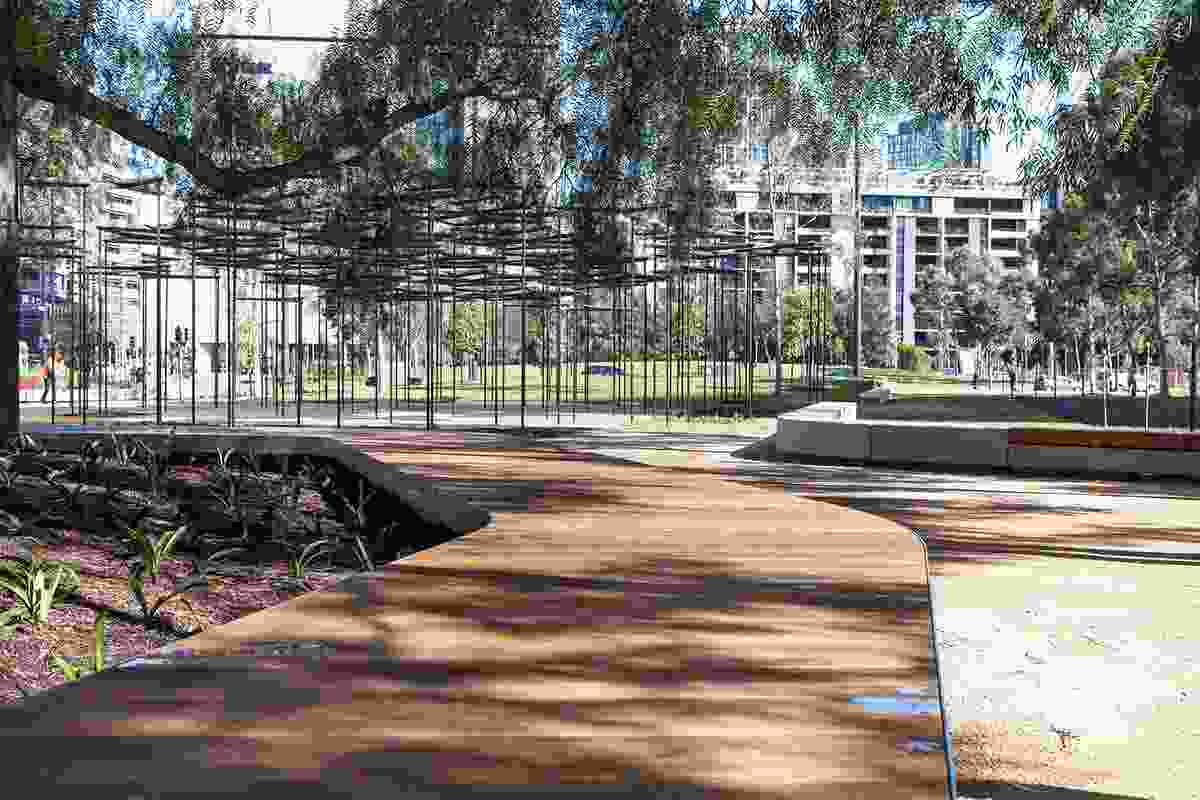 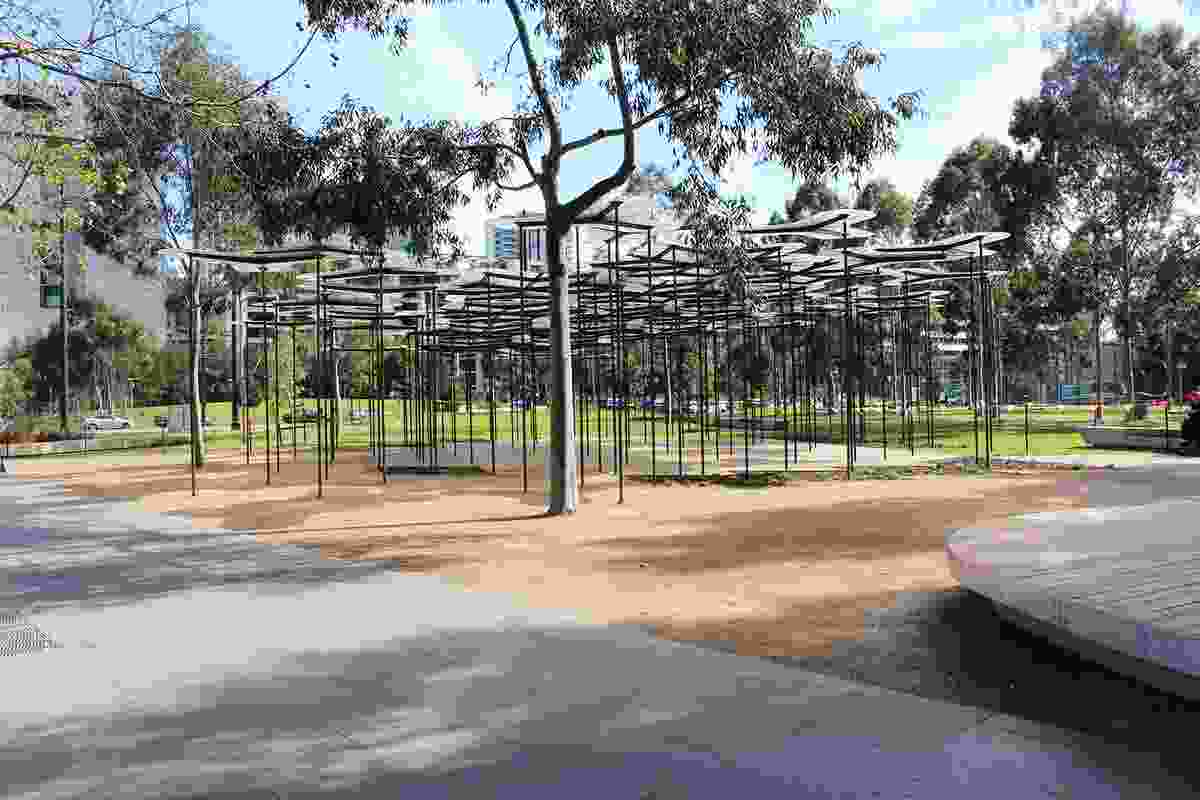