The work of Andrew Burges is informed by an artistic sensibility and intellectual rigour that can be traced back to the early years of his architecture career.

After completing a Bachelor of Architecture at the University of Sydney in the early 1990s, Andrew went on to study at the Harvard Graduate School of Design before accepting a teaching position at the Rhode Island School of Design (RISD). Here he taught architecture within the context of a fine arts college, an experience that would later influence the development of his own practice. “There was a strong culture of making,” Andrew recalls of his time at RISD. “It was a very creative, physical kind of architecture school.”

Returning to Sydney in 2001, Andrew established Andrew Burges Architecture. He wanted to create a tactile, design-focused practice. When I visit him in his recently relocated Surry Hills studio, the legacy of those formative years in the USA is evident in the assortment of paper, cardboard and balsawood models scattered throughout the warehouse space. “We are still heavily invested in physical models as a way of exploring each project,” he explains. “It’s an iterative process of making multiple models to study the development of projects.”

Over the past ten years the practice has grown to a core team of five staff members working on projects of varying scales across Sydney. One of the first built projects was a carport on a steeply sloping site in the northern suburb of Northbridge. The client’s initial brief included a request to draw vehicle access down from the street to the house at the bottom of the site. Not wanting to lose the hillside garden, Andrew designed a two-storey structure that would act as a bridge between the level of the street and the garden below.

“The breakthrough for this project was to start developing it as a two-level cube, which gave us the opportunity to explore two different readings at two different scales.” With its carefully composed window openings and matt black exterior, the structure has a minimalist, sculptural quality that allows it to be perceived as both an object and a spatial environment.

Ambiguity of scale extends into the interior of the lower level. Designed as a flexible living space for the clients’ teenage children, it has a compact plan with multifunctional joinery, bringing to mind boat or caravan interiors. “One of the things that came out of that,” says Andrew, “was this idea of compactness as a way of thinking about residential design, where the physical scale and the perceptual scale can be quite different.”

The Waverley House brief challenged the concept of compact design, calling for a new four-bedroom home on an irregularly shaped site. Here the traditional suburban model was reversed, with the house and garage condensed into the rear of the site and the backyard relocated to the front.

The retention of outdoor space is a significant concern for Andrew, who recalls being struck by the presence of nature on his return from the USA. “Nature in the city really defines Sydney, so anything that can preserve that characteristic is important to me.”

The garden is screened from the street by a continuous boundary fence that acts as a datum, separating the distinct conditions of the upper and lower floors. While the geometry of the upper level responds to the surrounding site context, the ground floor was designed to encourage family interaction through a series of interconnected living areas. “We were trying to address the social complexity of the house, so that from the living room you could see through to the family room and kids’ play area,” says Andrew. “These kinds of constructed views are only possible when you have multiple rooms compacted together.”

This interest in compact space was further explored in the design of a new addition to an existing cottage in a neighbouring suburb, Bronte. Seeking to minimize the impact of the new structure on the heritage-listed streetscape, Andrew projected the outline of the existing roof towards the rear of the house. The resulting envelope houses a main bedroom and home office that appear to hover over the extended living area below. “We took this profile as something we had to work within and made the second storey a kind of habitable roofscape,” explains Andrew.

More recently, the practice has completed an extensive refurbishment of a heritage-listed house in harbourside Darling Point. As Andrew recalls, the existing 1930s house “embraced the modernist aspect on the exterior, but internally it was a series of tiny rooms.” The interior space was reconfigured around a central stair core that winds up towards a new rooftop pavilion. Within this rationalized interior, walls are pulled back from the outside edge to reveal the sweeping curves of the external form. “Wherever we could we pulled walls off the rooms, so you got that sense of the space running right through. We were playing with scale, with tightness and then opening up.”

Andrew’s ongoing investigation into scale and the transformation of space through multiple uses formed the basis of his shortlisted competition entry for the new Australia House at the Echigo-Tsumari Art Triennale in Japan. Located in a rural area renowned for its harsh winters, the new pavilion provides a combined home, studio and exhibition space for visiting artists.

Informed by the flexible spaces of traditional Japanese architecture, the design proposes a simple interior room cocooned within a double skin of external walls. Above this, a steeply sloping ceiling is punctuated by a series of light voids “almost in anticipation that when you’re really enclosed in this heavily snowed area you get a sense of spatial extension and natural light.”

Externally the structure draws on the language of Japanese animation, appearing like a creature caught in frozen motion in the snow. With its sculptural form and ambiguous scale, the Australia House proposal sits somewhere between art and architecture. While existing only in unbuilt form, it presents a playful theoretical expression of the ideas of scale, compactness and flexible space that inform the work of Andrew Burges Architecture. 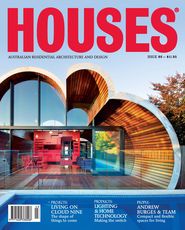 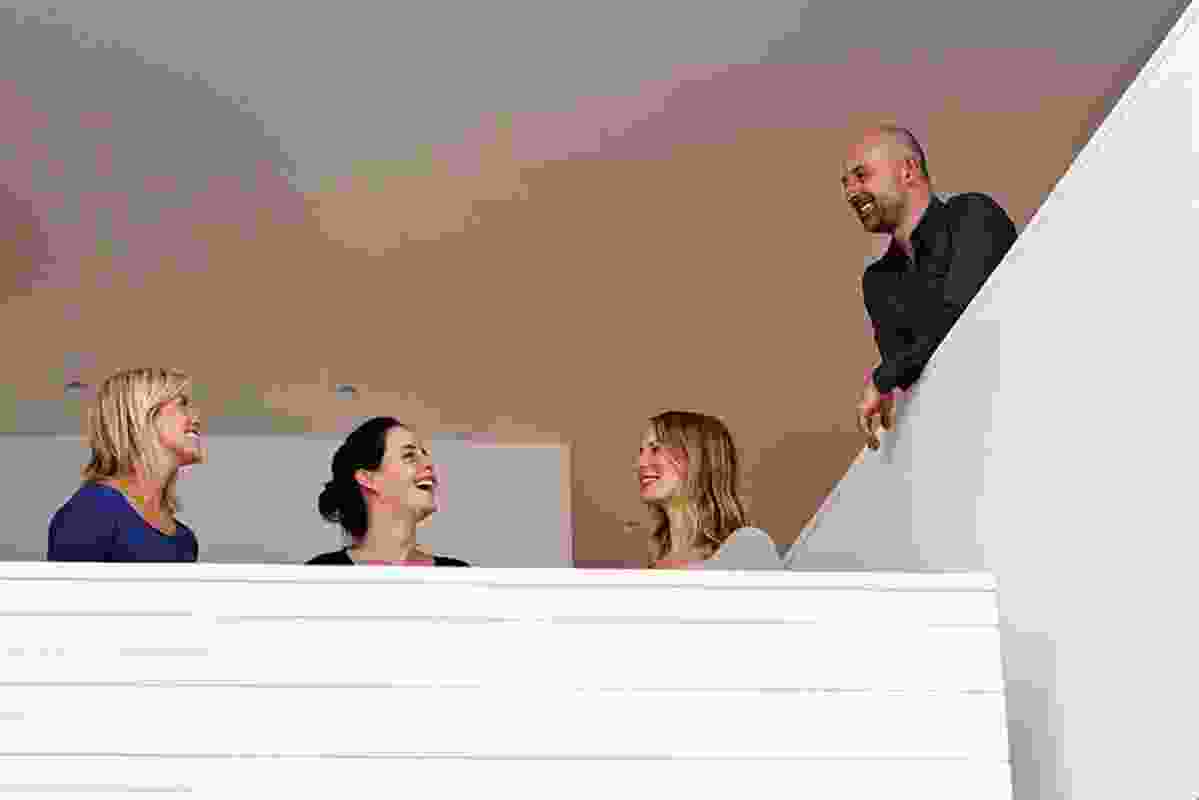 The lower level of Carport Treehouse in Northbridge, NSW.

Carport Treehouse forms a bridge between street and garden on steep site. 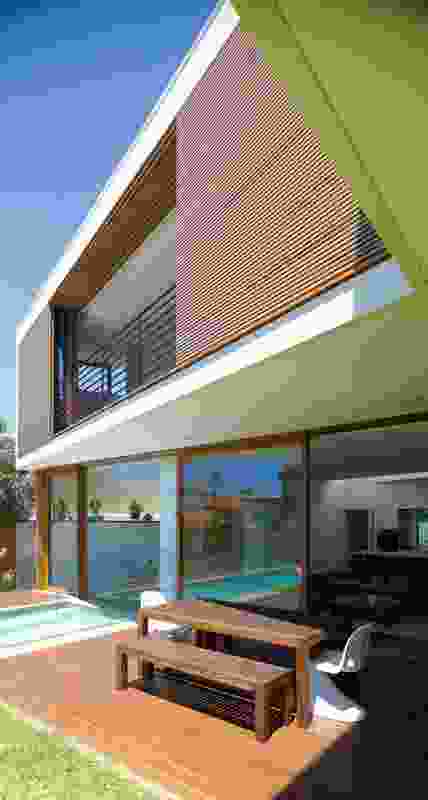 Waverley House reverses the traditional suburban model, putting the “backyard” at the front. 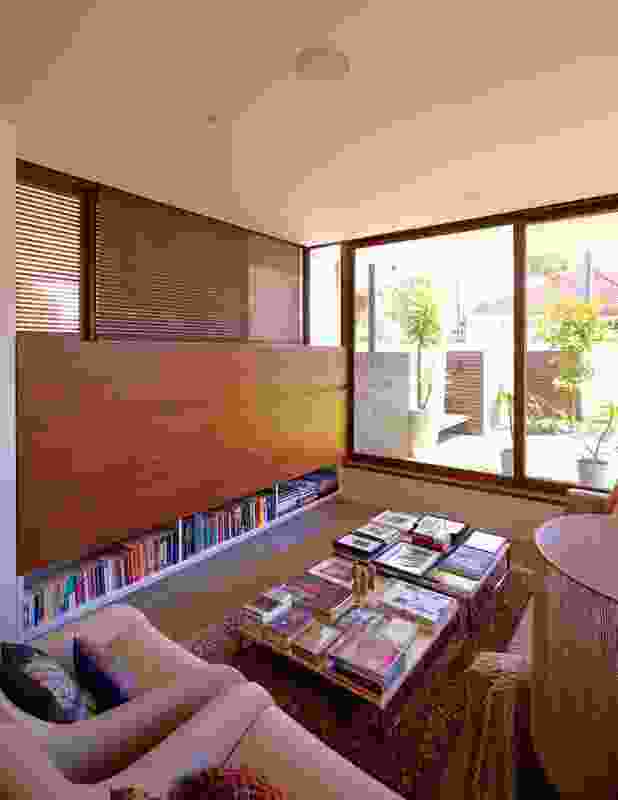 The planning of Waverley House makes clever use of limited space. 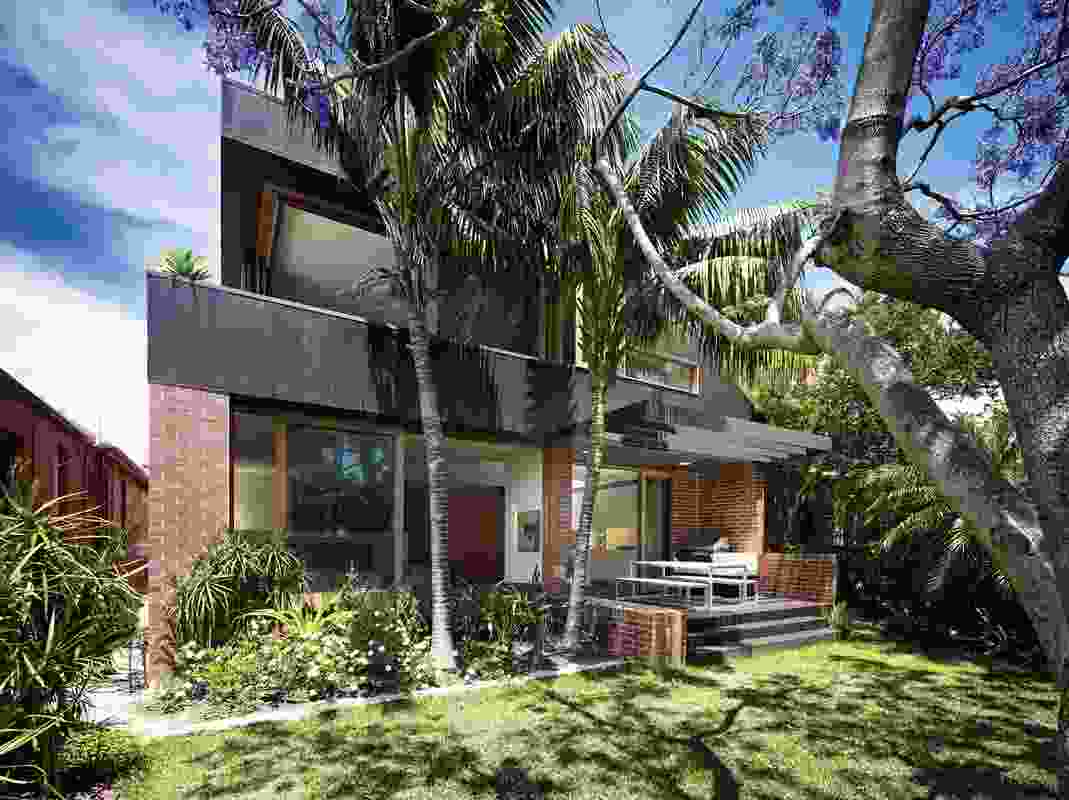 Bronte House minimizes the impact on the heritage streetscape, projecting the roofline to the rear. 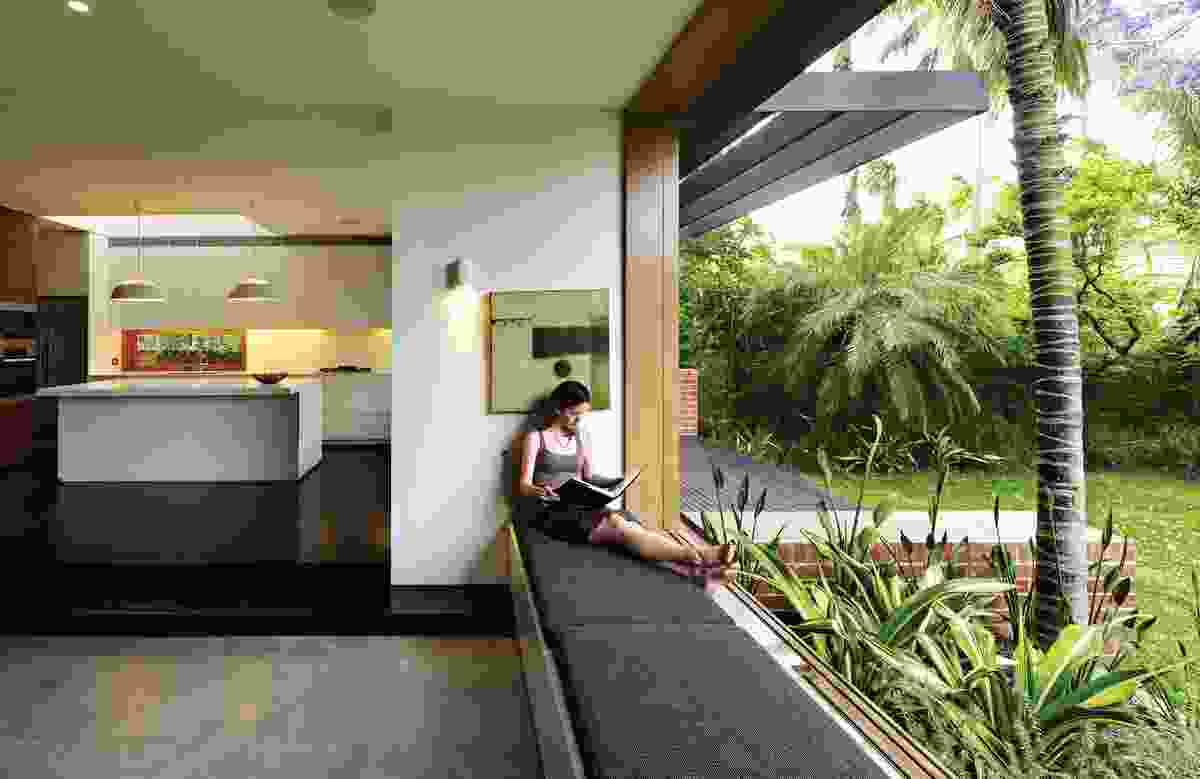 Bronte House living area extends into the garden with a built-in window seat. 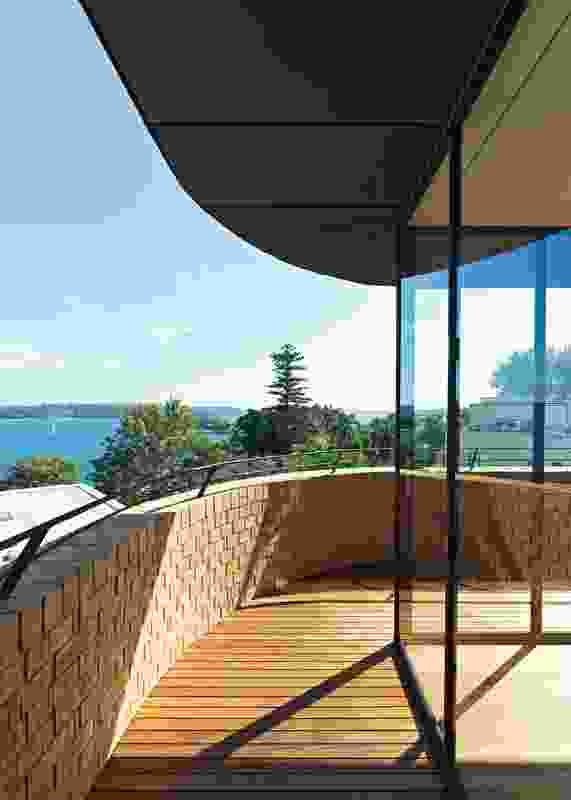 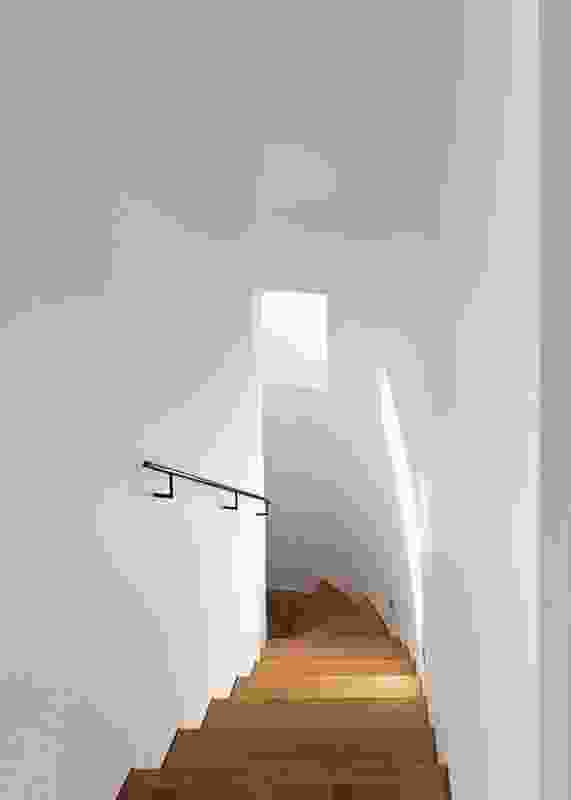 The central stairwell of Darling Point House winds up to a rooftop pavilion. 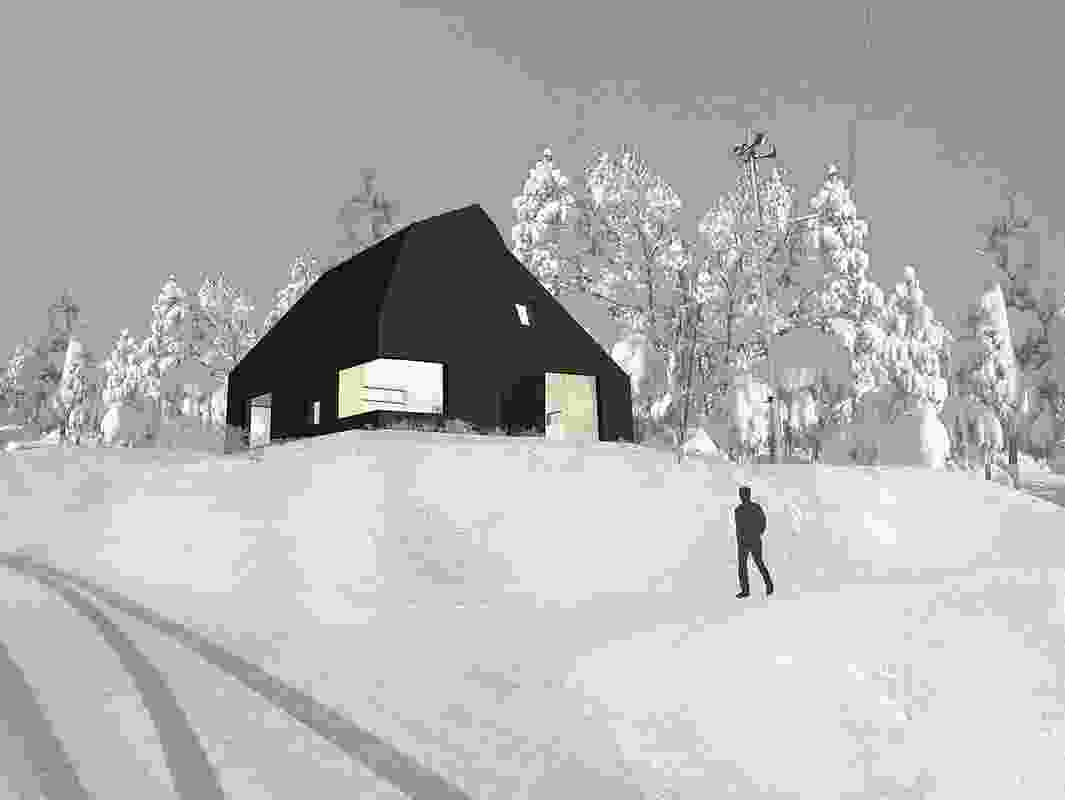 Shortlisted entry by Andrew Burges Architecture for the new Australia House at the Echigo-Tsumari Art Triennale in Japan.