Anne Zahalka’s portrait of a building

Canberra celebrated a year of anniversaries in 2013: the centenary of its name as the new Australian capital and the twenty-fifth anniversary of Parliament House. As part of a program of activities and events celebrating “the history and heritage of Parliament,” Anne Zahalka was commissioned to produce a body of work for the Parliament House Art Collection. The commission resulted in a series of large photographs collectively titled Parliament House at Work.

Zahalka is an Australian artist working in photography and photomedia. Her practice spans thirty years and her works are held in major public and private collections in Australia and internationally. She tends to work in series, with each body of work addressing a particular proposition. An example is Leisureland (1999), a series of large panoramic photographs documenting locations and activities of leisure such as an aquatic centre, a bowling alley, a wood chopping stadium and an IMAX cinema. Zahalka renders her images with a high level of technical resolution and detail to produce a still-life intensity. Almost literally, her images are stilled life.

Zahalka has also produced (and reworked) iconic Australian images of nationhood and national identity. In her series Bondi – Playground of the Pacific (1989), The Sunbather #2 mirrors Max Dupain’s celebrated Sunbaker (1937). However, the viewer is caught in this moment of recognition only momentarily before realizing Zahalka’s photograph is not just a colour version of Dupain’s black-and-white image: the unruly red hair of her bather suggests a different figure from that of Dupain’s sunbaking, bronzed male. In the same series, the people in The Bathers highlight the actuality and specificity of bodies different in gender, size, age and culture while compositionally mimicking Charles Meere’s painting Australian Beach Pattern (1940), an artwork that projects the national life of Australia and Australians during the interwar period as one of health and athletic perfection.

This ability to understand scale as well as her production of “some of the most iconic images of contemporary Australia,” are cited by the Department of Parliamentary Services as reasons for selecting Zahalka for the twenty-fifth anniversary commission. In an essay in the catalogue that accompanies the commission and exhibition, Martyn Jolly, Head of Photography and Media Arts at Australian National University, looks back at the photographic history of Parliament House and the commissioning of twenty-five photographers to photograph the building during its construction. He notes their focus on its formal geometry, the building’s “flat planes, hard edges and abutted textures.” A quarter of a century later, it is fitting that another photographer has been invited to respond to the building.

In her preparation, Zahalka observed that despite the five thousand people who work there, the tidal influx of parliamentarians and the more than one million visitors per year, there were no people in the photographs on the Parliament of Australia’s website. Zahalka says: “It seemed strange that there was so little evidence of life there.”

With this observation in mind, Zahalka entered Parliament House in search of “life.” In a building “the size of a small suburb,” she visited hundreds of rooms on all levels, seeing “things that no ordinary visitor would see,” and discovered an extraordinary array of facilities such as a travel agent, a creche, a post office, a gym and a hairdressing salon. In her catalogue essay “Housekeeping,” Zahalka tells stories of meeting staff that had been working there since Parliament’s official opening in 1988: “gardeners who had trimmed the hedges, mowed the lawns and pruned the trees since their first planting.” It was these people and the places they worked in that she wanted to bring “out into the light.”

In Zahalka’s work, this coupling of people and place is critical. Looking at her photographs, it not so much a question of who these people are as how they are. The individuals are not named. Instead, their occupation and the location of their work are foregrounded by the titles: Gardener, Forecourt; Mechanical Fitter, Plant Room; Cleaner and Australian Federal Police Officer, Prime Minister’s Office. The viewer becomes attentive to how the individuals and their surroundings are interwoven. Zahalka writes: “At the heart of my practice is a continued commitment to the documentary photograph as a way of recording, defining, and contextualizing the subject.”

Earlier series also focus on occupation as both work and inhabitation. In the Resemblance series (1986–87), which includes works such as The Musician and The Cook, individuals are surrounded by the materials and objects of their trade. Zahalka styles and art directs each scene so that every detail is considered and rich. In the Parliament House photographs, as with her previous series, the viewer’s attention is captured by the detail as the photographic process stills life. In Artworks Manager, Member’s Office, House of Representatives, the greens and blues present in the upholstery, the coasters on the table, the paintings and the woman’s clothes become foregrounded. In Gardener, Forecourt, the animate swirls and curls of the pond-cleaning hose playfully contrast the geometry of the building. And Cleaner and Australian Federal Police Officer, Prime Minister’s Office invites an attentive eye to notice specific spatial qualities: the cleaner on the left (with another animated coiling cord), the federal officer in a booth on the right and the Queen, framed on the wall. Stilled life.

In a letter written in 1984, Romaldo Giurgola of Mitchell Giurgola and Thorp – the architects of Parliament House – said: “We are trying to do something rather new: to make this Parliament Project a ‘base’ in which craftsmanship becomes conscious of its own potential, in which we intentionally gather people of different trades into a common purpose or ground upon which their expectations become more hopeful.” Zahalka’s portrait of Parliament House brings to light an ongoing crafting and care invested in the building and individual investment in a collective expression through occupation. This portrait is not one of heroic ideals so much as one that celebrates the contribution of daily life. Zahalka makes the life of Parliament House visible in its detail, specificity and singularity.

In 2013, Parliament House received the Australian Institute of Architects’ Enduring Architecture Award. The jury’s citation noted: “… extraordinary spatial and material control. With exquisite craft, attention to detail and material selection, every design decision resonates with symbolism and meaning, creating a calm yet rich and layered set of spaces. Combined with thoughtful selection and integration of art, the building not only withstands the tests of time but also continues to live larger.” Zahalka’s portrait of Parliament House is a celebration of this enduring quality through the people who continue to work there twenty-five years later.

Anne Zahalka’s portrait of a building 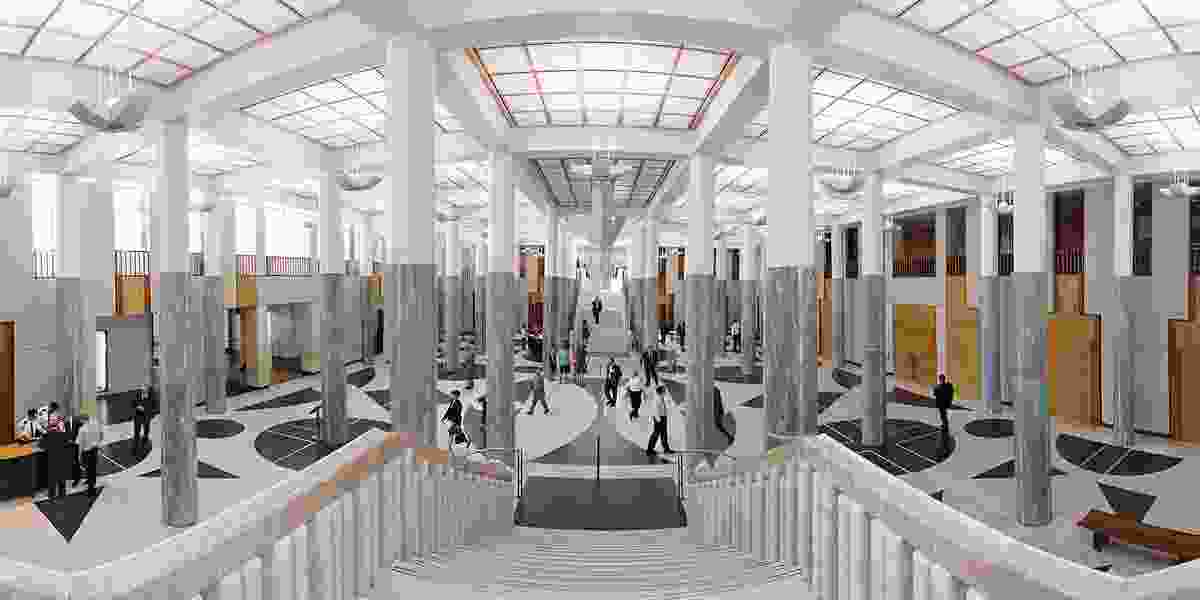 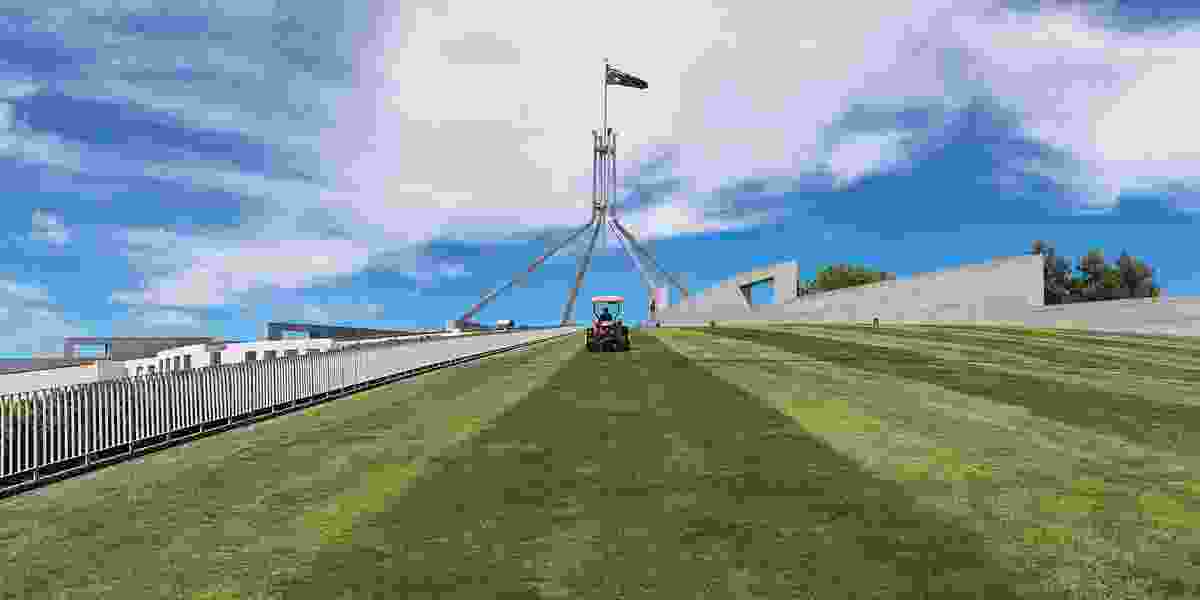 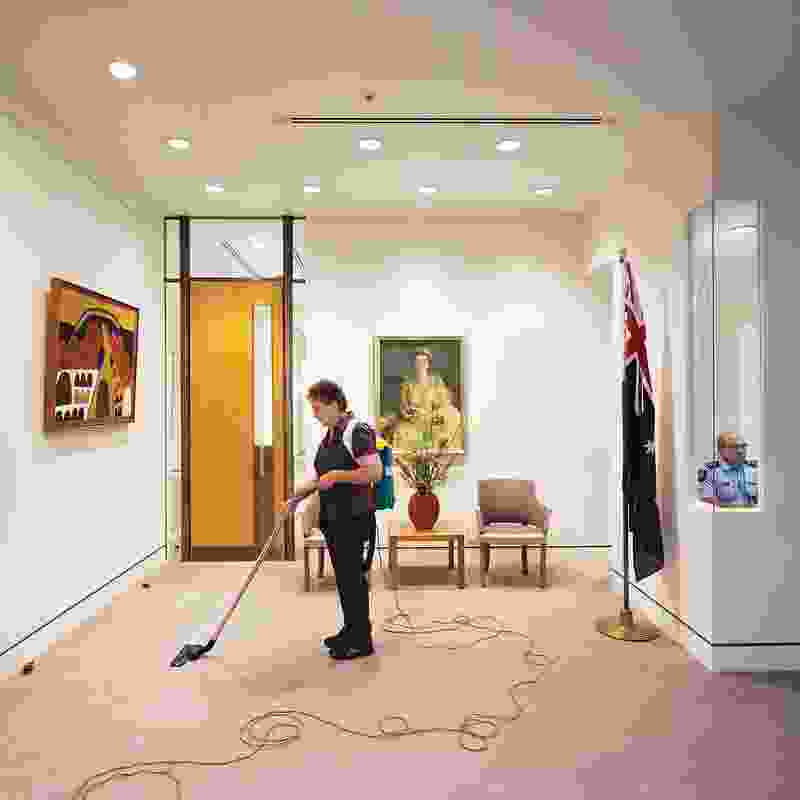 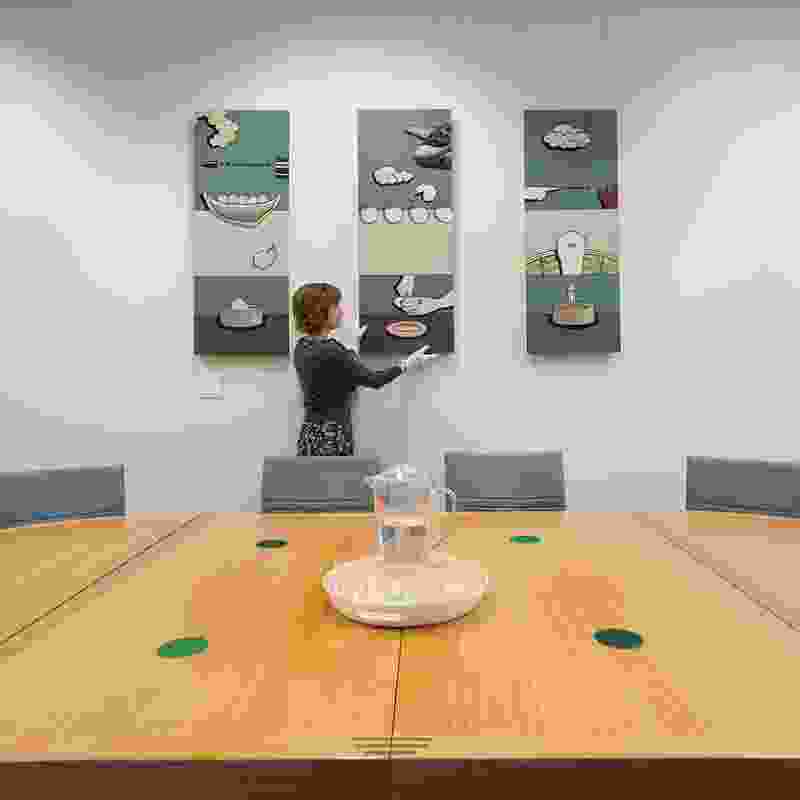