Searle × Waldron makes a grand stand in the city of Ballarat.

When we think of an architect’s first project, an extension or new house for retiring parents or a backyard renovation for friends comes to mind, certainly not a public arts building won through open competition. However, this was the case for Searle × Waldron Architecture, whose first real project – a small annexe to the Art Gallery of Ballarat – is a building of unusually refined conceptual and formal sophistication.

The brief history of this emerging architectural practice is quite atypical. Partners Suzannah Waldron and Nick Searle met in the first year of undergraduate study at Sydney’s UTS architectural school before moving to Melbourne to complete their degrees – Waldron at RMIT and Searle at Deakin. After graduating, Searle spent two years working for BVN in Melbourne and designed the award-winning Ballarat Learning Exchange (BLX) facade directly adjacent to this most recent project. They made the overseas pilgrimage – Waldron worked at the OMA practice in Rotterdam for eighteen months and then later moved to London, where Searle was then working.

Searle, however, had become increasingly interested in competition work and was on the lookout for a suitable one they could enter together. When both Waldron and Searle returned to work for local Melbourne practices, Searle found an open single-stage competition for an eighty-thousand-square-metre contemporary art museum in Shenzhen, China (now known as MoCAPE). Six major international firms were invited (and paid) to compete alongside the open section of the competition. The pair decided to enter and invested a lot of energy. Remarkably, they were then announced as one of four joint winners chosen to go into the next stage of the competition.

As they recall, “It all became pretty intense as soon as we won. We were out of our depth, in the big league all of a sudden, and the pressure mounted very quickly. We had to be in Shenzhen by the end of the week and had four weeks to complete the next round.” Paid a reasonable amount for this second stage, and needing to work full-time on the project, which included regular communication with Arup in London, Waldron gave notice and Searle’s firm gave him a sabbatical. Although they didn’t win – it was finally awarded to Coop Himmelb(l)au – the experience and money gave them the confidence and momentum to start up their own firm.

However, their MoCAPE competition entry found some expression here in Ballarat. The MoCAPE formal parti was a lifted, angular volume raised above a striated ground plane or plinth and sunken courtyard. In this project, the arrangement is somewhat inverted. A striated, moulded roof form hovers above the ground plane plinth. Although the project is exactly five hundred times smaller than MoCAPE, Searle and Waldron found this strategy of roof plane and plinth a very effective way to activate the surrounding site and adjacent interstitial spaces.

The original open tender called for the design of an extension to the existing function hall space of the Art Gallery of Ballarat. It was conceived of as a marquee space that would be used for openings and outdoor events and could expand the capacity of the gallery, all within a relatively small budget. As with much of Ballarat’s building stock, the gallery, originally known as Ballarat Fine Art Gallery, one of the oldest and finest of Australia’s regional art galleries, is heritage listed. Due consideration had to be given to how connection and response were made to the existing building and the surrounding context, with its open view lines to the goldfields.

In particular, it was Waldron and Searle’s inventive and well-considered urban strategy that first caught the attention of the competition organizers and gallery director Gordon Morrison. Ballarat’s wide and very grand avenues and public streets abound with monuments and rich, ornamented Victorian buildings, often with transitional verandah spaces. However, as the architects observed, the city presents very differently behind that facade. The grandeur drops, revealing a network of laneways, add-ons, timber public halls and warehouse buildings. At the gallery’s rear, the annexe site faces onto an under-used public plaza and directly into this back-of-house context. And so their solution, which involved reworking the bandstand and verandah typologies as well as recalling the local timber-clad public halls, addresses the complexities of this urban precinct through a number of scales and functions.

Between roof and plinth, and aside from two very slender columns, an all-glass facade opens onto the adjoining plaza, with operable sliding panels that can be entirely moved back. Alternatively, the building can be closed up and lightly screened with an open-weave curtain for a more internal experience. In this situation, the extraordinary ceiling-scape dominates. A series of four angled skylights opens up the space, providing different spatial experiences while drawing in diffuse southern light. The ceiling is clad with slender white battens alternately fixed across a black acoustic fabric, creating a dynamic striated effect. Where the building is closest to the existing brick gallery, the striations are thicker and more solid, while at the building’s edge and nearer the glazing, the rhythm becomes more porous.

The spatial experience of the annexe plays out between this expressive hovering roof and the simple ground plane – half of which was existing and retains an original artwork sandblasted into the stone. From within the space, the view is thrust outwards across the plaza and adjacent buildings, right through to the site of the original goldmines. This is complex and rewarding architecture, formally rich yet disciplined and carefully controlled – a stimulating and metred architectural experience very rarely seen in an architect’s first project. 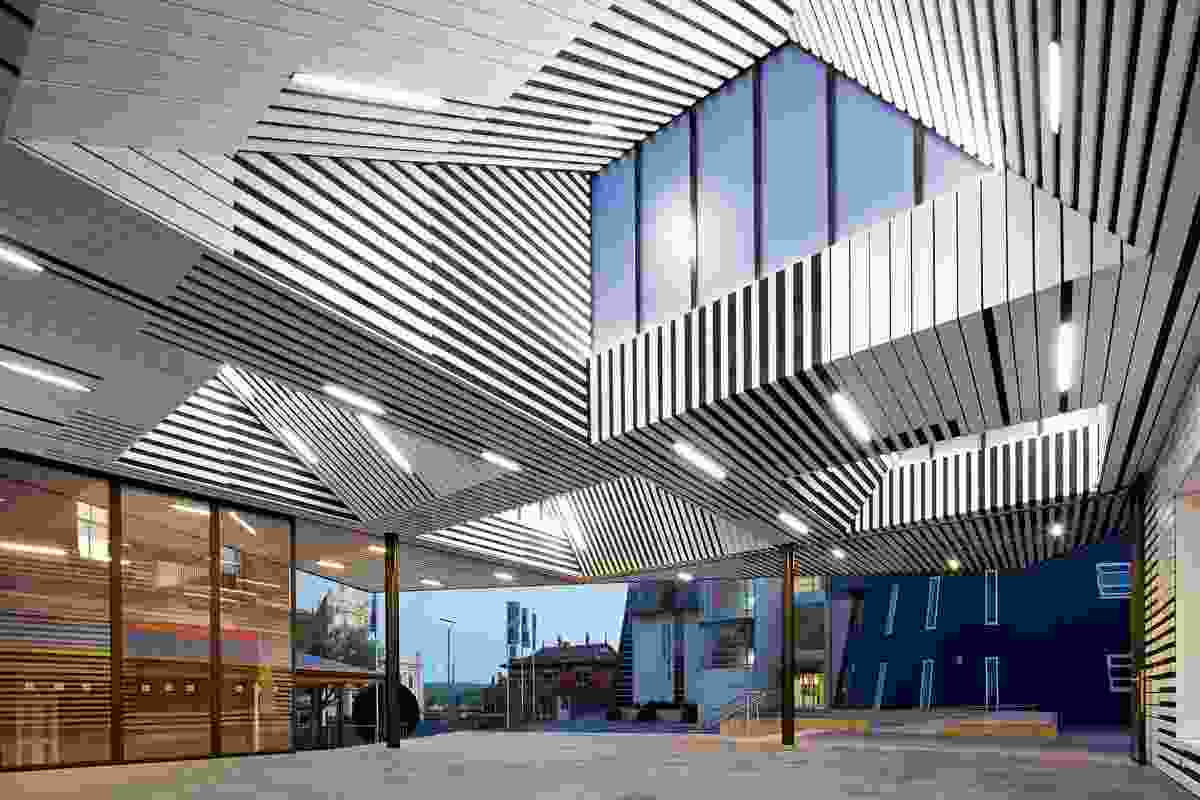 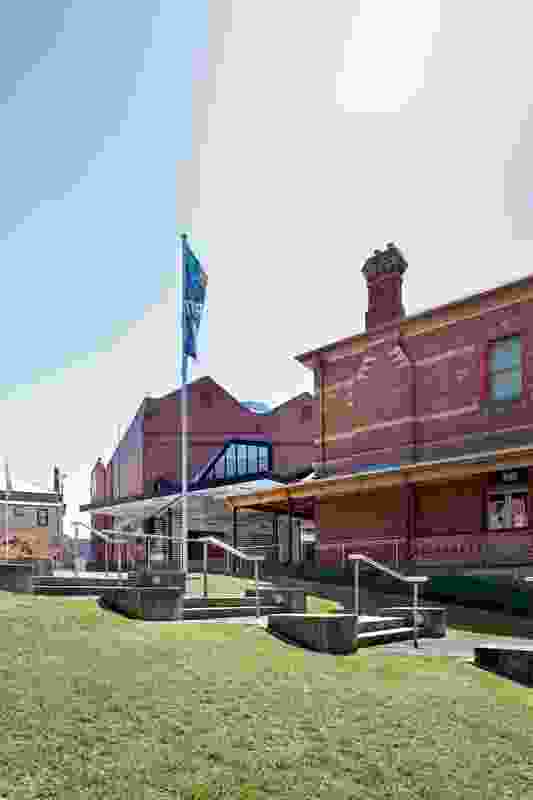 The marquee space is an extension to the heritage-listed gallery. 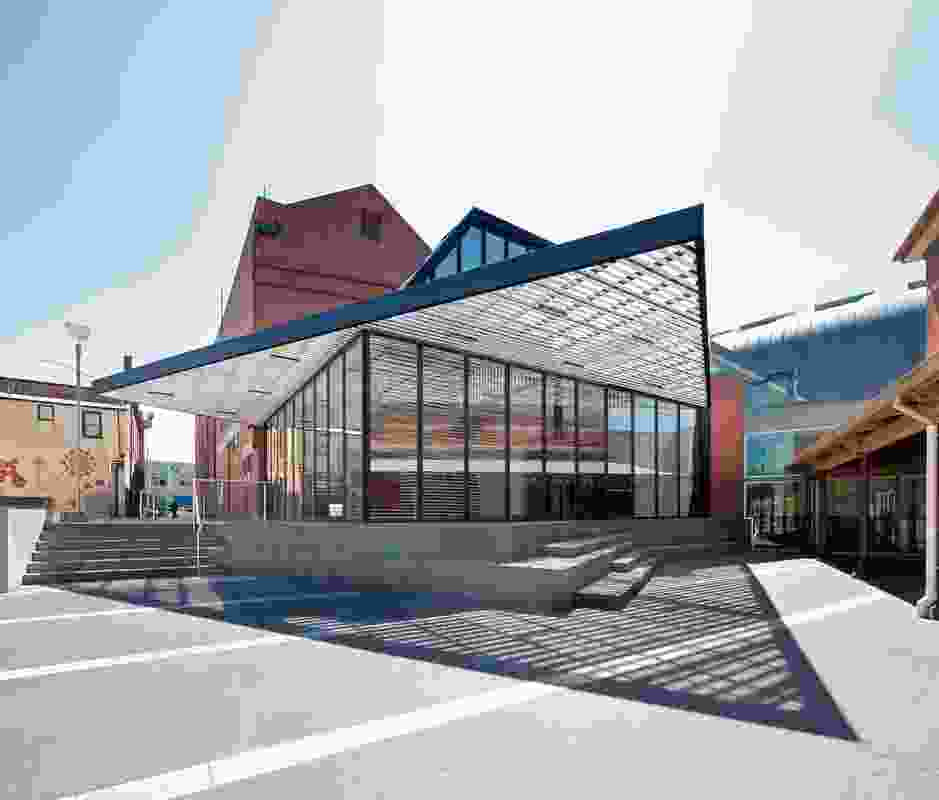 The project combines the programs of verandah, bandstand and public hall to become a new hybrid space. 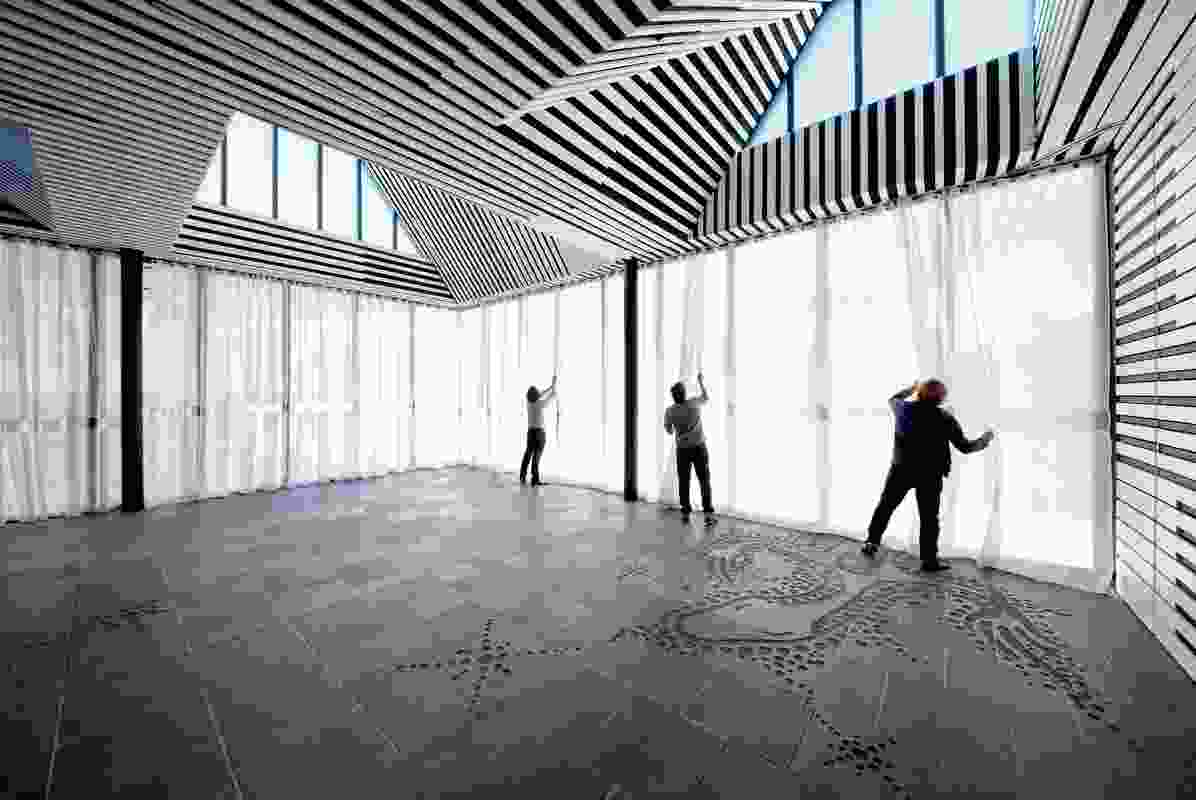 A goanna totemic image incised into the basalt by Ballarat-based Gunditjmara elder Diana Nikkelson is a reminder of the trace left on the land by the Wathaurong clans. 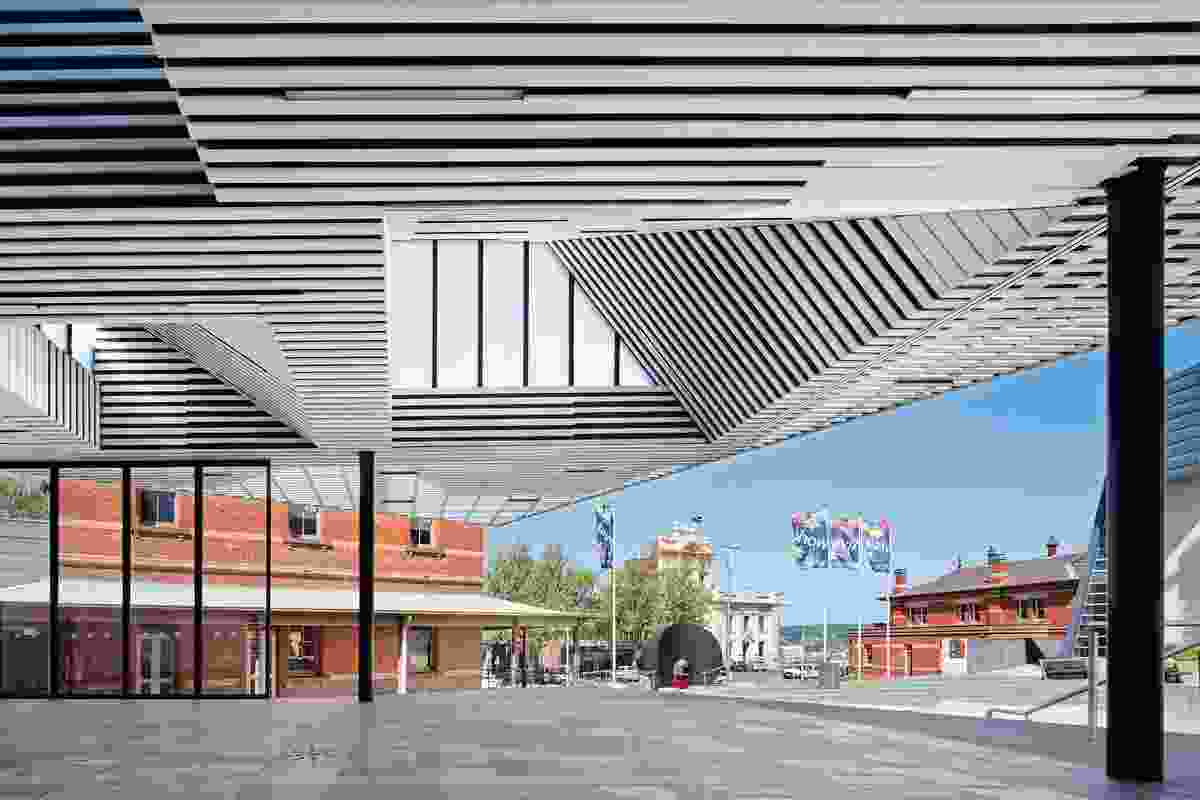 Between roof and plinth, operable panels slide back, allowing access to the plaza. 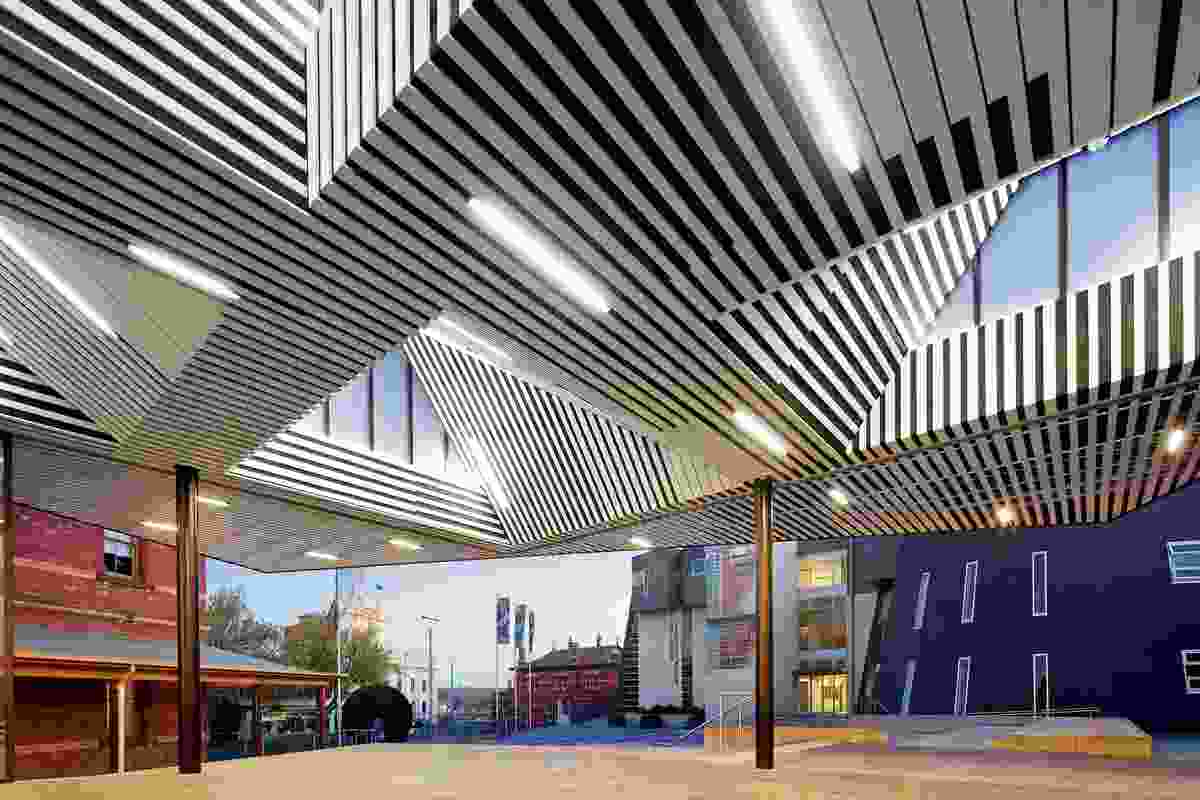 White battens are fixed to black acoustic fabric to create a striated effect. 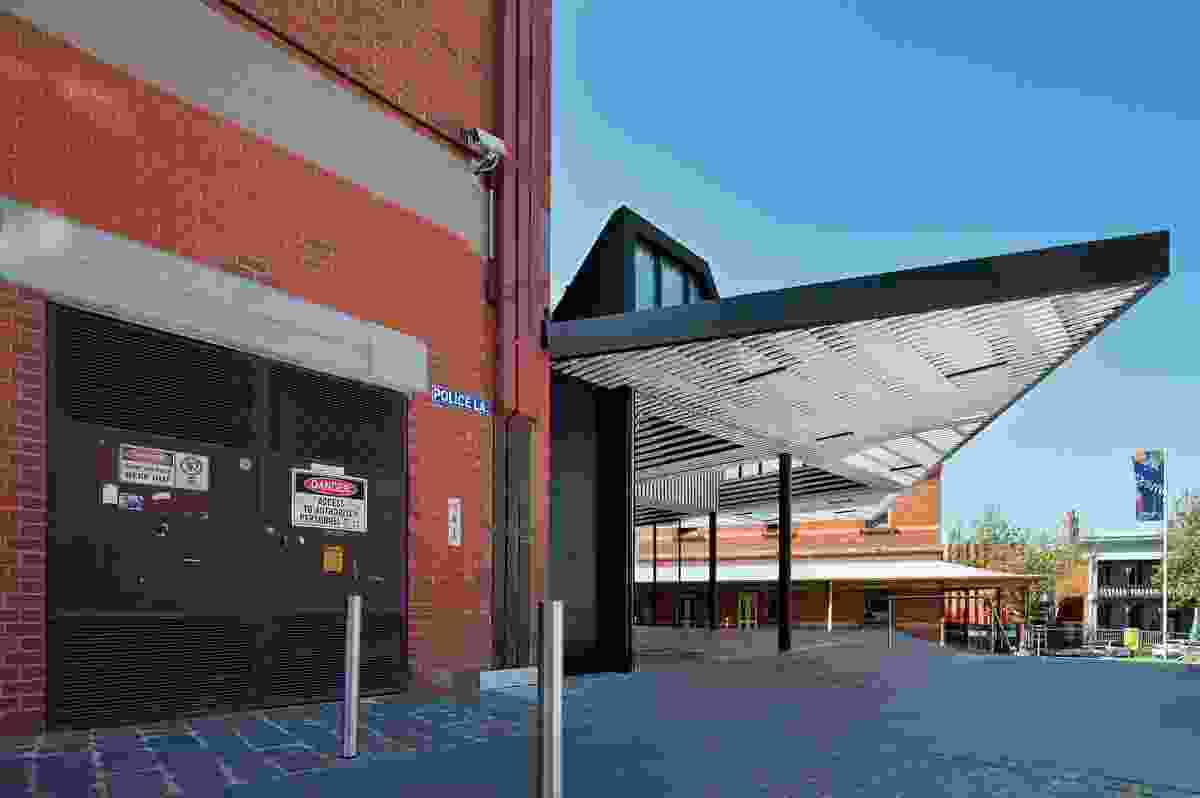 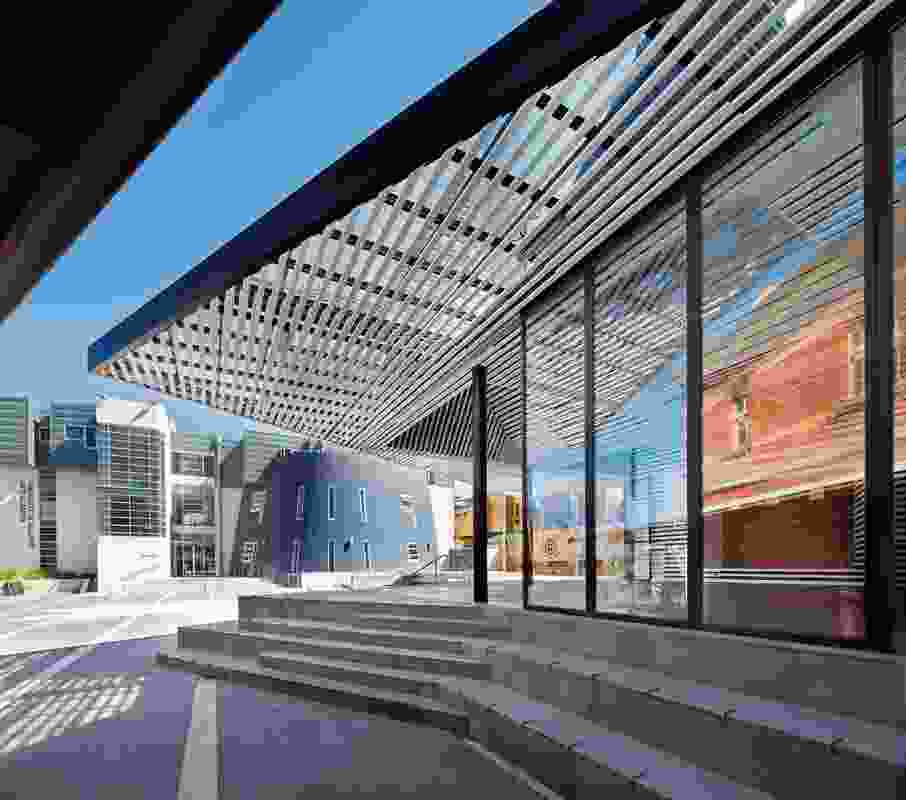 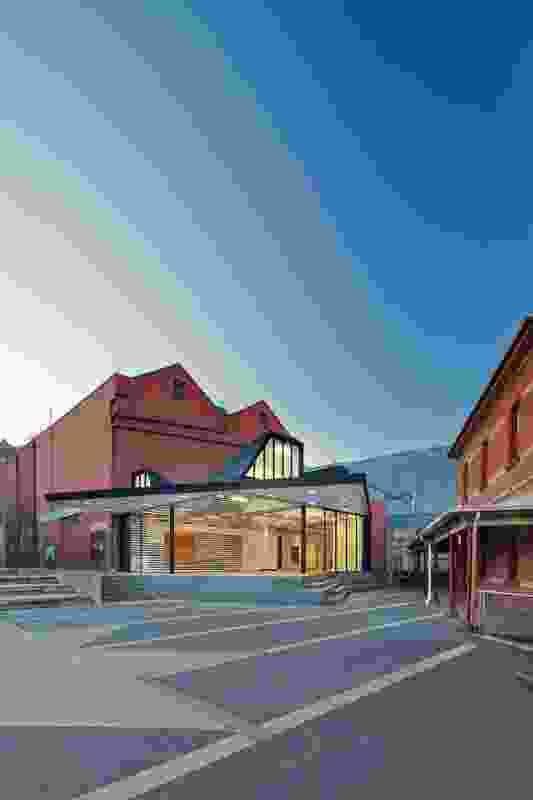 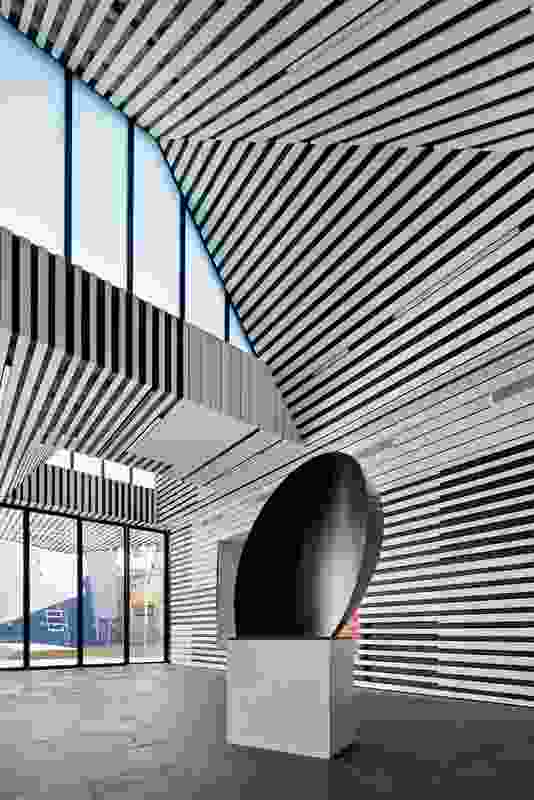