An ode of sorts to the humble brick, an addition to a worker’s cottage by Cox Rayner Architects and Twofold Studio both celebrates and transcends its compact inner suburban site.

A luminous slab of marble forms the kitchen bench, contrasting with the robust timber and brick interior elements.

Bernard Tschumi once declared architecture to be a profession dominated by rules and restraints. The more restraints thrown at an architect, he observed, the more pleasure is derived from their transformation into opportunities. Architecture as bondage, you might say. While I doubt Tschumi had the painful world of Australian planning in mind, it is certainly true that some of Queensland’s best contemporary architecture is produced under that unique form of Brisbane City Council bondage known as the Residential Design – Small Lot Code, a complex web of requirements and conditions seemingly scripted by the Marquis de Sade himself.

Thus one of the starting points for architect Jayson Blight’s deceptively scaled house, sited in the inner-Brisbane suburb of Highgate Hill, was how to extend a small worker’s cottage in a way that maximized the site yet retained a neighbourly etiquette, and that balanced the privacy of enclosure with a desire for greater spatial depth, all within a tyrannical planning regime that prescribes where the walls go and when a room is not a room.

The old house was unusual in that it was not elevated (instead entered directly at street level) and that it was partially made of brick – both its footings and a conspicuously large double fireplace. The decision to retain the original building therefore meant retaining some of the site’s predisposition, which became an important generative starting point for the project. The side access to the west was kept; however, a planning provision that allows a nine-metre-long wall to run hard against the site boundary, anticipating the conventional side garage, was instead deployed to the east to create a part enclosure that would become a generously proportioned loggia.

A new roof section extends from the old house, which in profile takes the inverse form of the existing gable. The roof starts high at the point where old meets new. Here it performs the task of bringing a baffled northern light down into the centre of the plan, while operable louvred windows vent hot air. The roofline then slopes down over the hall and the pocket garden before rising again to the south. Here, much larger clerestory windows bring a wash of soft southern light into what is undoubtedly the heart of the house – the combined spaces of kitchen, dining and loggia.

While the soaring roofline visually connects the indoor and outdoor spaces, it also strengthens the house cross-laterally, as it is connected to the newly constructed concrete and brick wall to the east. This structural element allows two enormous sliding doors to roll back and create an uncommonly generous living space. Quite something for a block that is ten metres wide.

The perception of generous proportions created by the dramatic roofline (which is five metres high at its highest point), along with what might more accurately be described as two sliding walls, is in counterpoint to the reduced scale of low-profile fifty-millimetre bricks. This play with scale is subtle but effective in creating a sense of spatial generosity, anchoring this social space as central to the project’s design.

Meanwhile, the carefully considered material mix adds to its richness. Light filters through the rosewood vertical louvres to the west, the kitchen’s matt ebony cabinetry contrasts with a large luminous white slab of marble, while the silver-coloured bricks to the west render this space with an almost civic sense of purpose.

Indeed, the quality of brickwork throughout this house is a rare and beautiful thing. Of course, when discovered in a house in Brisbane it invariably betrays the hands of Shane Norton and Rese Rose Gates of Elvis and Rose. When Louis Kahn said, “even a brick wants to be something,” he could well have been thinking about the ever-growing portfolio of elegantly crafted work by Elvis and Rose. In this case, it was the old fireplace that was the catalyst for various elaborations on the English bond and the perpend (with and without mortar), an important part of what makes this something other than a typical renovation.

Brickwork is again evident as you pass down the rear steps to the garden. Here a garden bond has been used, not surprisingly, to make a garden terrace. This conveniently also forms a retaining wall, allowing the previously raised south-east corner of the site to be levelled. A majestic old poinciana has been retained. This tree, a plunge pool and brickwork terracing might have made for a crowded inner-city garden but for the fact that the owners get along with their neighbours. This has allowed the gardens to be only partially demarcated, mitigating the visual claustrophobia of the typical two-metre boundary fence. For a back garden, this landscape feels surprisingly park-like.

Speaking of fencing, the inventive use of a watery ha-ha wall around the pool has avoided the need for ugly intrusions into the garden. With a modest fence on one side, this mitigates the more typical impost of pool infrastructure upon the garden. Apparently a five-millimetre discrepancy has been identified somewhere, which gives you some idea of how the local council understands the word “tolerance.”

A side garage was decided against, which, aside from enabling planning compliance for the loggia on the other side of the house, also retains full side access to an undercroft. Part of the logic for this is to preserve the potential for this undercroft to be transformed in the future into a small separate living space with its own access from the street. For the moment, however, it is a happy home to a Ford Mustang. The extended width of the dining room above forms a cantilever over the garage. This rather unusually (in a block so small) provides the opportunity to park perpendicular to the driveway. The side access also creates a visual connection between the street and the garden landscape behind.

It is sometimes assumed that the best person to design a house is an architect who has designed twenty already. The same “logic” is applied to office and museum design. With this project, however, some of the moves that rethink what it is possible to do on a small lot are driven by the fact that this architect usually spends his days designing huge office towers and major public buildings in the city (when not designing his own house Jayson Blight is a director at Cox Rayner Architects). The confident execution of the cantilever, the boldness of the two hefty sliding walls and the generous response to the urban context, in avoiding acres of fencing and retaining valuable sight lines through the property, all betray an architect who takes construction challenges in his stride. This house is a counterpoint to the obsessively privatized space of so many homes. In a world where houses are regulated to the last five millimetres, it can take an architect who can still think big to find such opportunity in a modest worker’s cottage.

Aperture House by Cox Rayner Architects and Twofold Studio is the winner of the Horbury Hunt Residential Award at the 2014 Think Brick Awards. 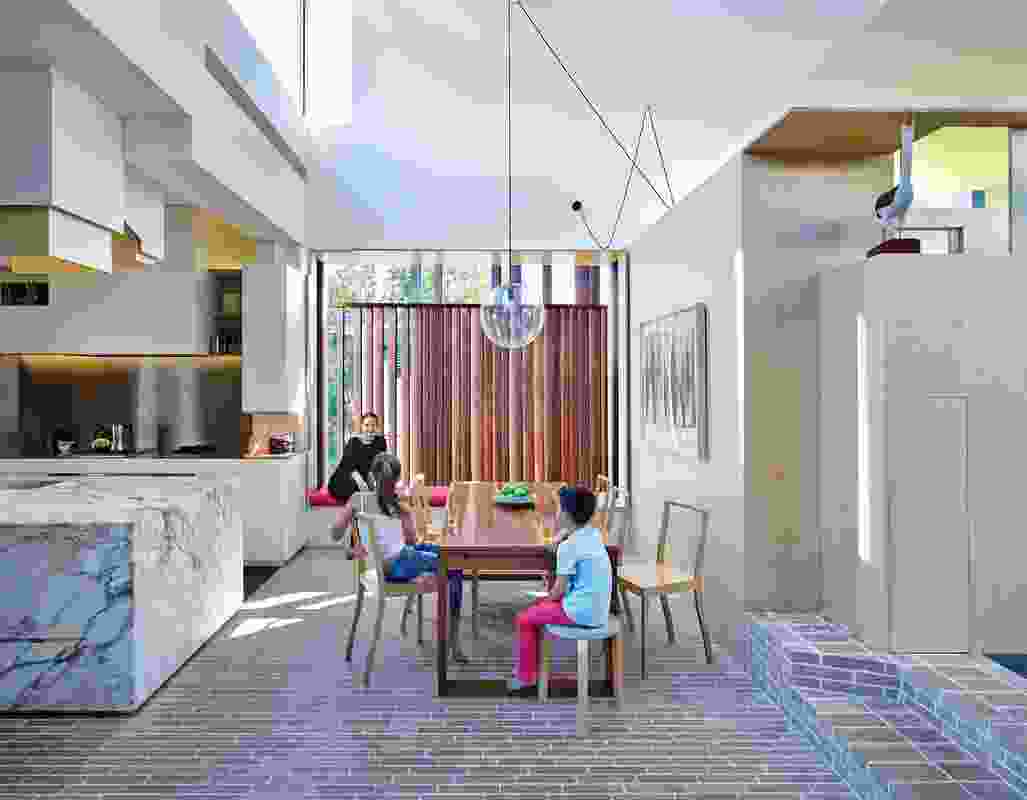 A luminous slab of marble forms the kitchen bench, contrasting with the robust timber and brick interior elements. 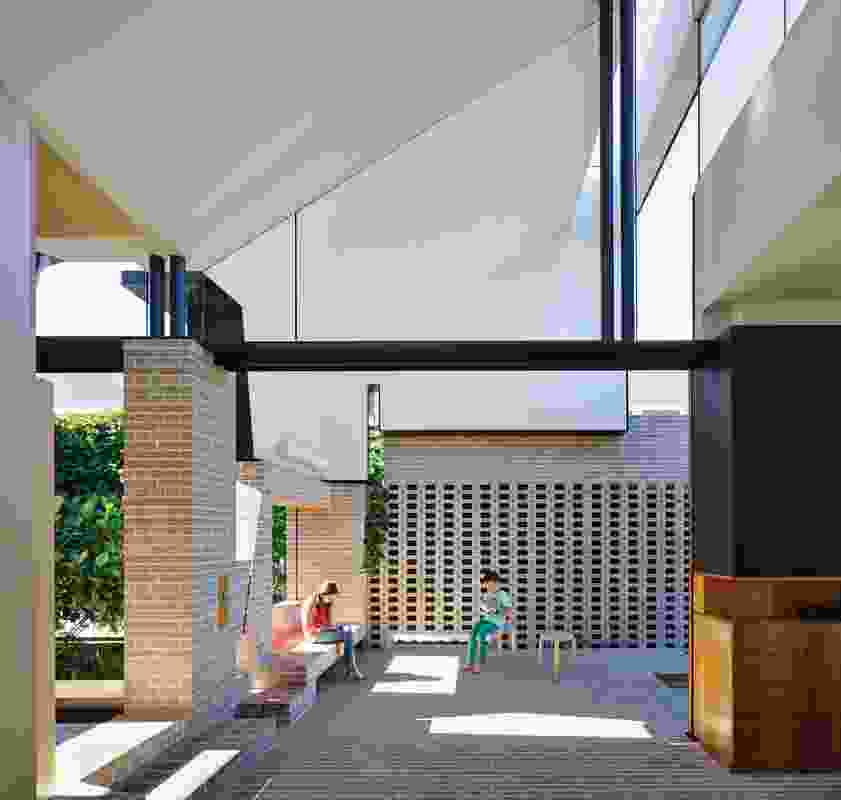 A planning provision for a side garage on the property’s eastern boundary was instead used to create a generously proportioned loggia. 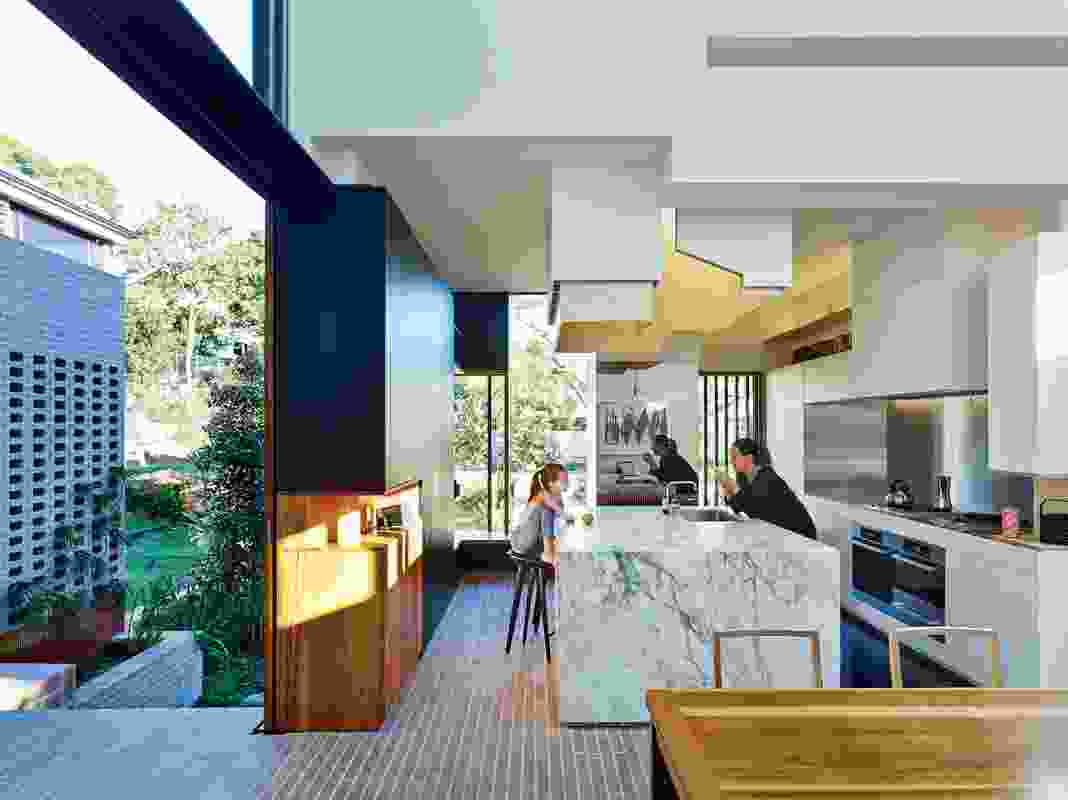 Enormous sliding doors can be rolled back to connect indoors with out and create a larger living space. 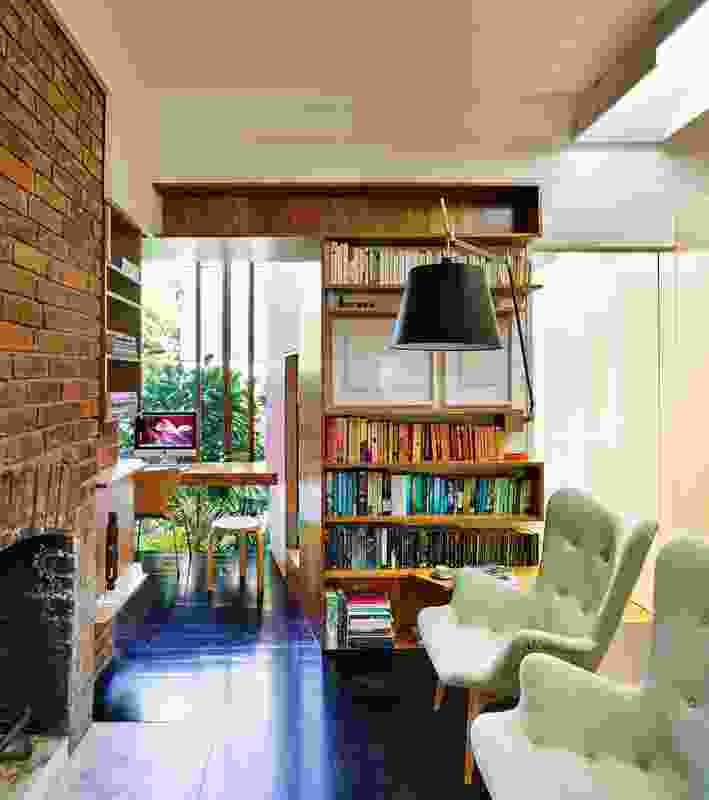 The new elements of the house were deeply informed by the original dwelling – the existing fireplace, for one, inspiring its extensive brickwork. 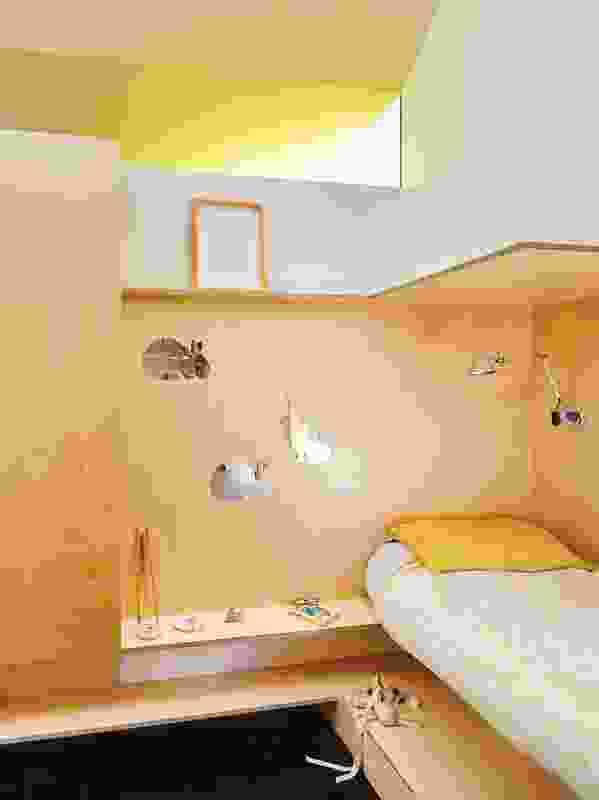 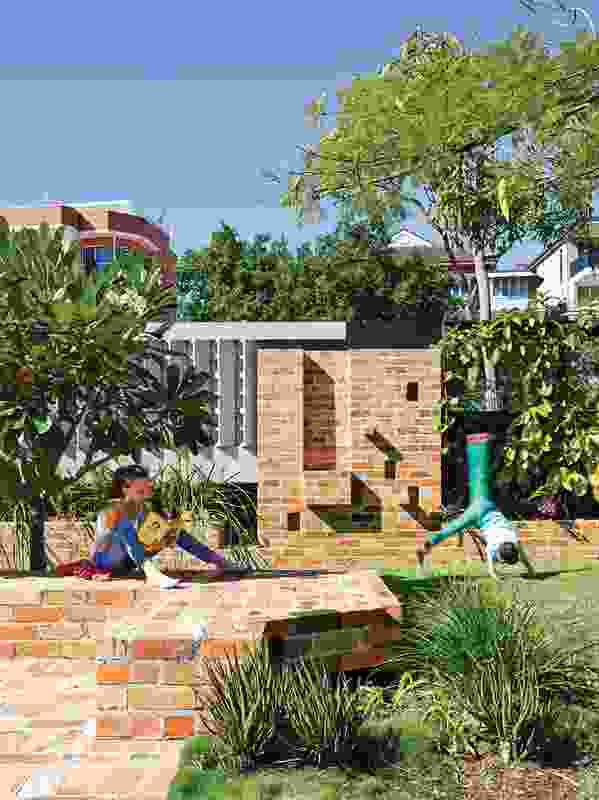 Good relations with the neighbours allowed for a more porous garden boundary. 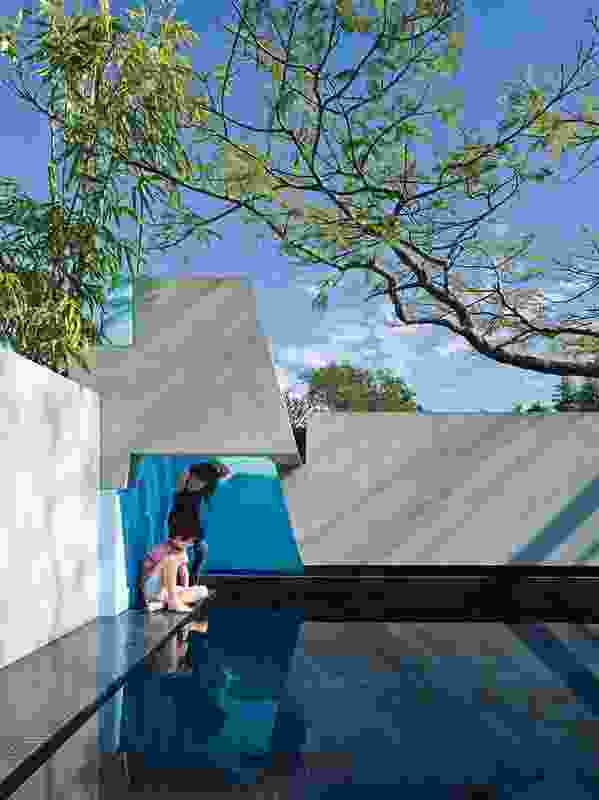 Sculptural elements tie the pool into the house’s and garden’s overall composition. 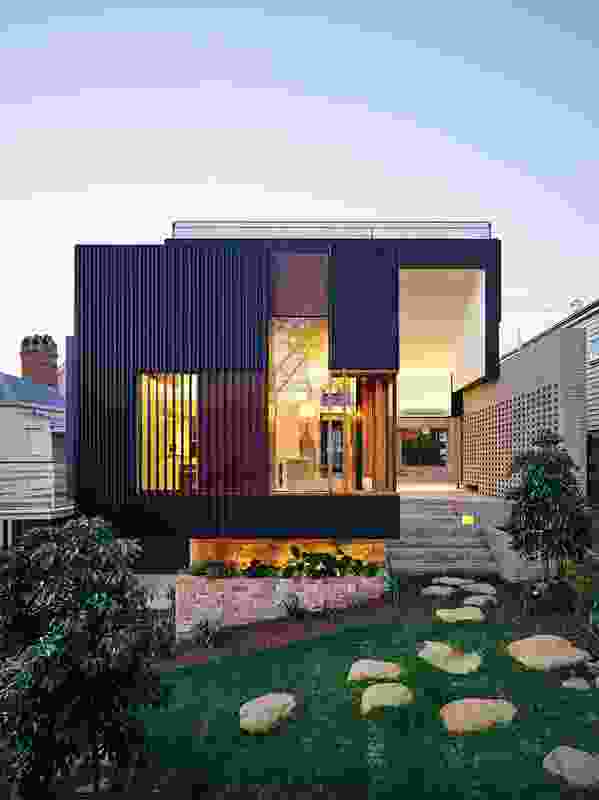 The cantilevered form of the dining room allows for access to a basement garage and a visual connection between the street and rear garden. 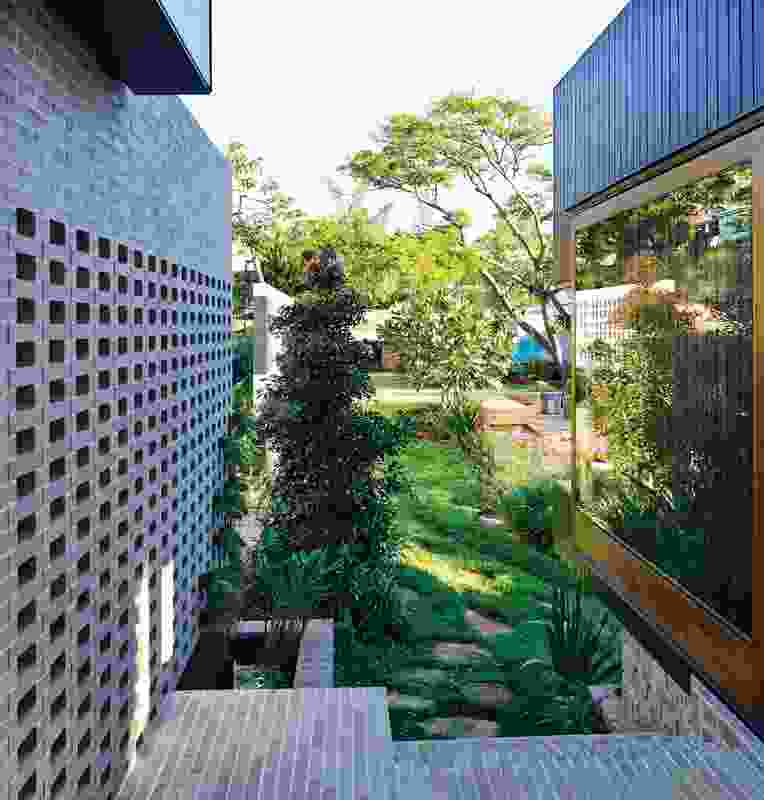 A small eastern courtyard brings light deep into the plan.