Sandra Kaji O’Grady considers whether, in a quest to develop viable models for self-sufficient housing, architects can act as the mediators between climate-change denial and the apocalyptic persuasions of survivalists.

Matthew Butcher’s Flood House is an infrastructure project that monitors tidal movements in the Thames Estuary in England.

On a stormy weekend, as the Bureau of Meteorology advises denizens of the east coast of Australia to stay indoors, I note with alarm the lack of food in our house. We’ve condiments to last the year, but will be out of substantial provisions in two or three days. Already we’ve no milk or bread. Experts believe that cities are similarly provisioned to last just two or three days should a breakdown occur in the supply chains that see our food continually sourced, processed, packaged, shipped and distributed to and from all over the world. Cities – and all of us in them – are dependent for food, fuel and water on macro-systems of economic cooperation and large infrastructure operated and owned by governments and corporations. For some, this situation is unacceptably risky and their strategies for extricating themselves from dependency have given birth to the survivalist movement. Survivalists –also known as “preppers” – are individuals and groups who are actively preparing for emergencies, disruptions and the end of the world as we know it.

The quickest way to understand the survivalist movement, or at least its American incarnation, is to watch Doomsday Preppers, a reality television program that aired on the National Geographic Channel from 2012 to 2014. Over fifty-four episodes, it featured hundreds of householders and their preparations for Armageddon. It is mind-bogglingly bad reality television—low-budget, late-night filler that indiscriminately pitches the thriving vegetable garden of a charming and functional family alongside the bunker fortified against zombies by its twitching and incoherent denizen. The tone veers ambiguously from showering contempt on its protagonists to urging its audience to follow suit. Each prepper has their favourite scenario, be it alien invasion, earthquake, wildfire, supervolcano, solar flare, pandemic, civil war, nuclear attack or honey bee decline. One anticipates an electromagnetic pulse wiping out America’s electricity supplies while another believes crops will fail as predatory insects become immune to insecticides. Some scenarios have a scientific basis while others are pure fantasy.

Despite the incongruous motivations between one prepper and another, the television series follows the competitive format of cooking and talent shows, with experts assessing the subjects’ preparations against four consistent criteria: water, food, fuel and defence. Defence looms especially large and a great deal of airtime is spent discussing weaponry. The opening episode depicted one prepper hitting a pig carcass with a serrated-edged shovel of his own invention, supposedly testing its utility for slaying future human foes. Presumably the human foes would be alive and beseeching him for help, rather than dead, trussed and silent, but such differences and the ethical questions they represent scarcely matter here. Indeed, it is arguable that Doomsday Preppers is less about imminent apocalypse than it is about a crisis of masculinity in America’s less affluent and poorly educated semi-rural and outlying suburbs: the preppers are almost always men who cajole their families into weekends spent in evacuation rehearsals and rifle practice. The catastrophic narrative is inseparable from the fantasy of transformation from struggling breadwinner in a declining, dis-unionized economy to singular hero who saves his family. It’s the same narrative dirge that animates more highbrow versions of fatherhood in the post-apocalpyse, such as Cormac McCarthy’s 2006 novel The Road.

What interests me most about Doomsday Preppers is that many of the scenarios envisaged by its recruits are also being played out in the offices of city planners, insurance agencies, engineers, police and, yes, architects.

What interests me most about Doomsday Preppers is that many of the scenarios envisaged by its recruits are also being played out in the offices of city planners, insurance agencies, engineers, police and, yes, architects. Food and water security, fuel self-sufficiency and citizen safety are shared concerns. Architects have been researching the autonomous or off-grid house and teaching its principles for decades with a fervour that comes close to the pitch of those in Doomsday Preppers. Architects, too, have been designing for dramatic climate change and natural disaster: see, for example, Matthew Butcher’s floating Flood House on the Thames Estuary in Essex, England and the Amphibious House by Baca Architects, built on the banks of the River Thames in Buckinghamshire, England. Solar power, rainwater collection and ever higher stumps built in readiness for deluge are mainstream in the Australian suburbs, while the more dedicated homeowners extend their efforts to installing compostable toilets, raising chickens, tending to labour-intensive vegetable gardens and making old-fashioned preserves. Mainstream, too, is the use of information about ecological crises to make decisions about where and how to live this century. Tools such as Coastal Risk Australia, designed to communicate coastal inundation associated with predicted sea-level rise to the year 2100, are considered authoritative. Based on findings from the Intergovernmental Panel on Climate Change (IPCC) Fifth Assessment Report, these predictions are not in the same realm as an imagined zombie invasion. Responses to this sort of information are referred to in academic terms as climate-change resilience and adaptation, and the Australian government has a national strategy that adopts the same terms. The Department of the Environment notes, however, that “Individuals and businesses will often be best placed to make adaptation decisions that reduce climate risks to their assets and livelihoods.” Which brings us back to preppers.

At what point do individuals make “adaptation decisions” in order to save their lives, and is there a way to do this that does not lead to the anarchy imagined by the Doomsday Preppers? We are seeing architects and residential real-estate developers put their minds to this challenge seriously. The Danish pavilion at this year’s Venice Biennale includes a project designed by Effekt for a Stanford University spin-off company called ReGen Villages. ReGen Villages’ founder James Ehrlich aims to create off-grid capable neighbourhoods that grow their own food, generate their own energy, manage waste locally and collect and recycle water. The first attempt, to be built in Almere, not far from Amsterdam, will comprise just 100 homes and many greenhouses, but Ehrlich foresees building thousands of these villages, each adapted for its local climate. It is an extremely clever business concept, addressed directly to a middle class struggling to mediate between climate-change denial and the lonely life of the survivalist. Most significantly it embeds an integrated infrastructure for self-sufficiency at the scale of the community and with a governance structure no more complicated than your average company-share apartment building. It appeals to those urban dwellers who imagine themselves “living off the land” but know in their hearts that they haven’t the farm skills or knowledge to do it. It also shifts the focus from preparing for the worst, to living responsibly and with pleasure in the present. I, for one, am hoping ReGen Villages and other similar proposals catch on, as I cannot see the point of survival if it means living alone in a bunker, eating from ancient cans of beans, devouring one’s children like Goya’s Saturn and brandishing a shovel at anyone that comes in range. 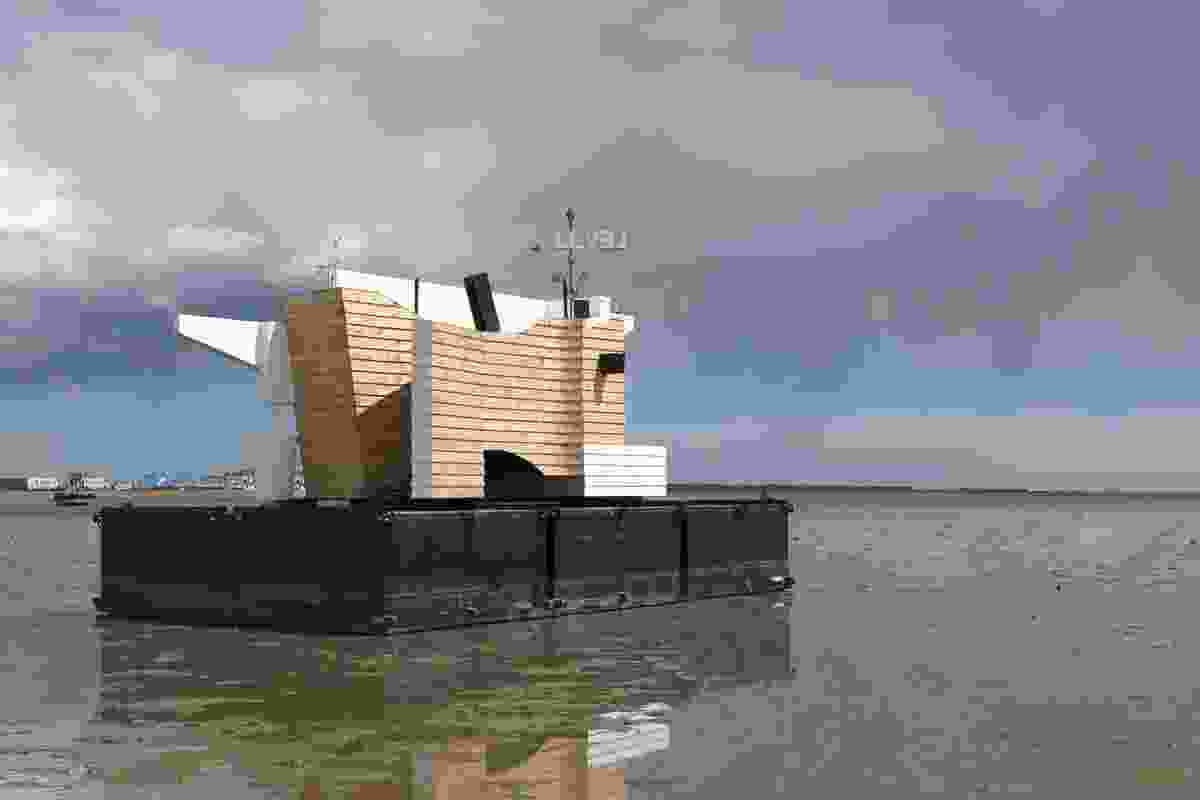 Matthew Butcher’s Flood House is an infrastructure project that monitors tidal movements in the Thames Estuary in England. 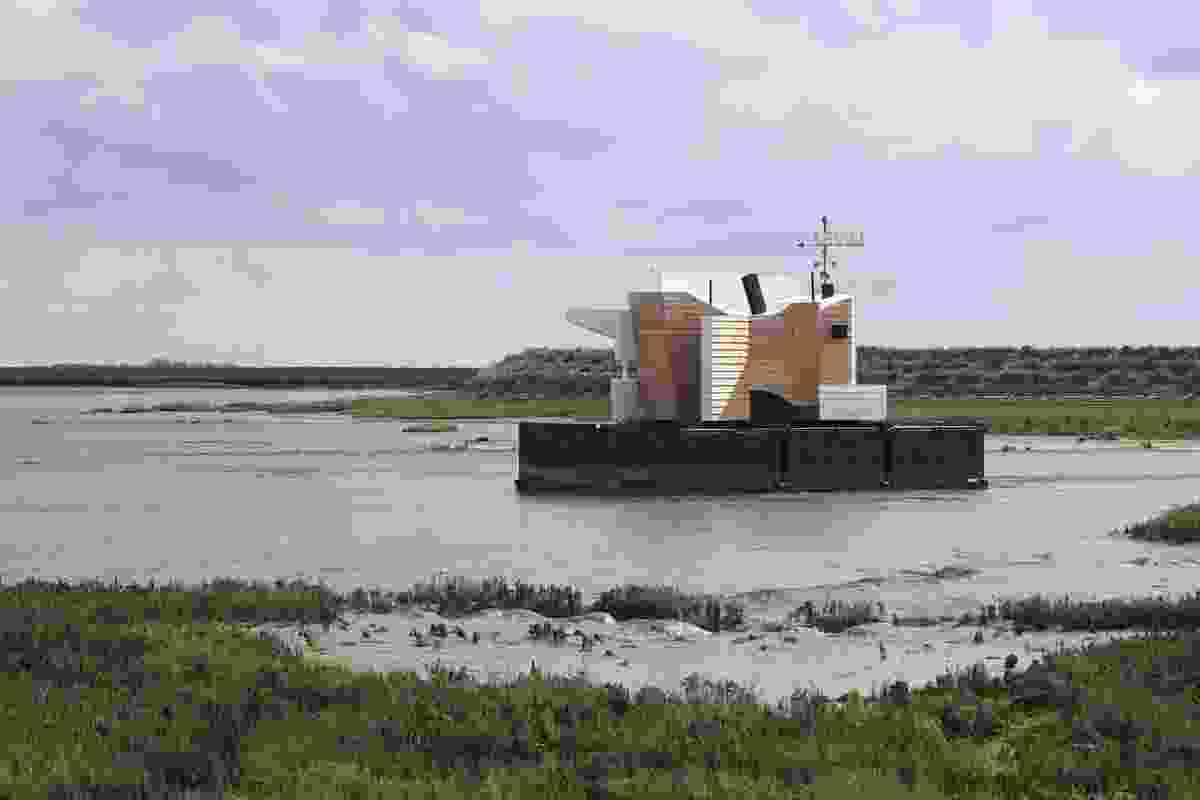 Flood House by Matthew Butcher. The ‘nomadic’ floating project challenges the idea that architecture must be a fixed entity. 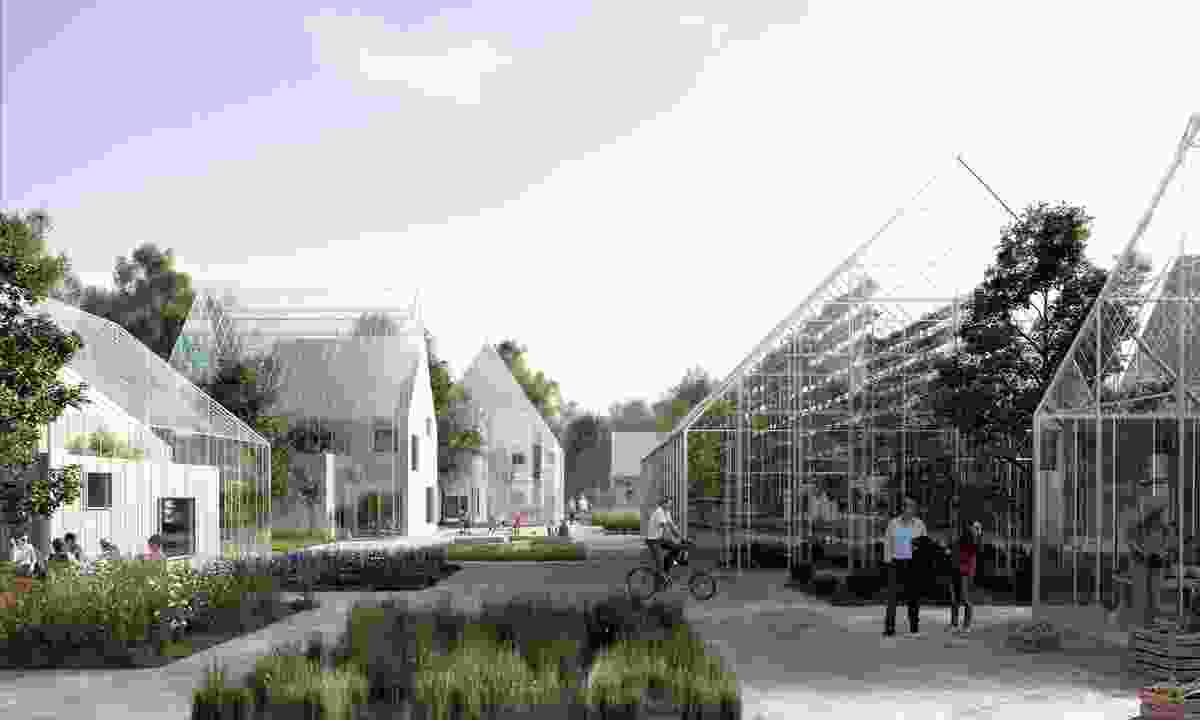