The sparsely occupied main plaza, except for a group of children on a school outing and some tourists taking photographs.

Successful city squares act as nodes that connect places. They facilitate flows of people going about their daily lives through them as much, if not more, than they attract people to them. These flows enable the kind of random encounters Jane Jacobs saw as the lifeblood of cities.

Melbourne’s Federation Square is a destination, rather than a node through which everyday life flows. To argue that tenancies, programming, governance and funding alone are behind the square’s problems is to ignore the basic issue that underpins the need for them in the first place. Federation Square was always going to struggle as a public space because it always needed to draw people to it, rather than through it.

What about everyday life in Federation Square?

As part of research exploring intercultural encounter in the public spaces of Western cities, I spent more than 200 hours in 2017 and 2018 observing and documenting life in Federation Square. I also interviewed its designers, managers and users.

The patterns of occupation and use are very consistent. Most people are tourists and visitors, rather than locals. They walk around, take photographs and leave. Few linger.

Some occupy the edge of the plaza at lunchtime, but the most occupied area is the part of the plaza that faces the city. This is no coincidence; people want to observe other people.

On occasion, large groups occupy the plaza, mainly school groups during weekdays and AFL fans on the weekend. Otherwise, it is relatively quiet.

Several factors constrain how people use the plaza. Security guards enforce rules that prohibit many everyday practices, like ball playing, skateboarding and busking. Extensive use of CCTV aids enforcement.

In other words, Federation Square operates like a venue, not a public space.

My research also showed that these factors have a disproportionate impact on local minority ethnic groups. Several interviewees reported feeling out of place. They felt unworthy of a space that is, for them, “too fancy” and unaffordable. For these groups, Federation Square is like the beautifully designed, highly curated home full of expensive furniture and artworks, rather than the somewhat messy but cosy family home.

So why do Melburnians love Federation Square?

Melburnians love Federation Square for the same reasons that the Victorian state government built it in the first place; it has significant symbolic capital. This is also why Apple wanted to locate there and not in a dozen other viable places in the city.

Melbourne had always lacked an icon, a symbol of the city, something to identify itself to a global audience. It also lacked a civic square. The centenary of Federation in 2001 offered an opportunity to address both.

Apple understood this. Locating one of these “Town Square” flagship stores in Federation Square would position them within of the most recognisable places in (what was then) the world’s “most liveable city”. The Apple controversy can therefore be better understood as a battle for the square’s symbolic capital.

However, it also holds significant symbolic value for the general public – as the civic square so long denied to them since Hoddle first laid out the grid and deliberately excluded public squares. The community campaign slogan against the Apple proposal – “Our City, Our Square” – pointedly captured this symbolic status.

How to (not) fix Federation Square?

The Victorian government’s recently announced review of the future of Federation Square is a clear admission the square is failing. Such a review will have to include recommendations to fix these failings. But how?

The dictionary defines the verb “to fix” as “to make firm, stable, or stationary” or “to give a permanent or final form to”. The recent heritage protection given to Federation Square, which arose out of the Apple controversy and ultimately ended its proposed tenancy, comes with the risk of locking in the future form, uses and role of the square.

Fixing Federation Square will be significantly more challenging than finding the “right” tenancies or changing how the space is governed and financed. Resolving the obvious urban design problems will mean developing over the rail yard to the east – a site perhaps more suited for Apple’s town square concept – to draw everyday life through Fed Square. It will also require changing the role of Flinders Street and Swanston Street-Princes Bridge to create more connections for pedestrians. It could also entail a significant redesign of the existing square.

Federation Square was always going to struggle because it relied on drawing people to it, rather than through it.

Jonathan Daly is a PhD candidate and casual Lecturer in urban design at the University of Melbourne. 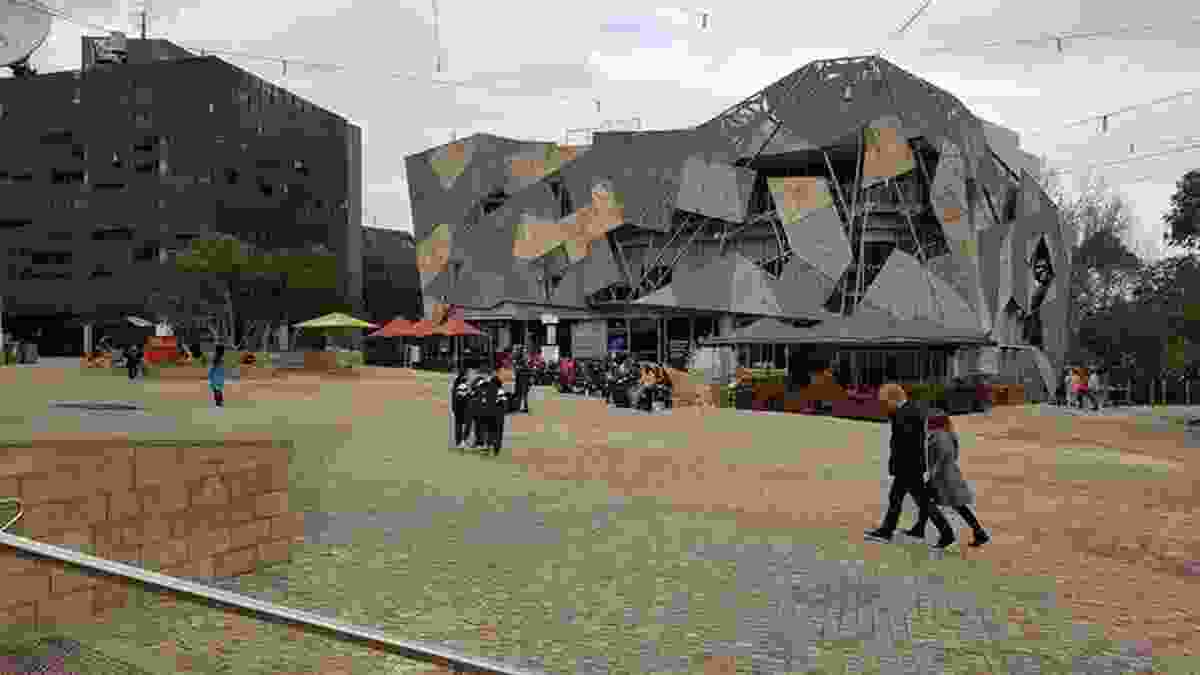 The sparsely occupied main plaza, except for a group of children on a school outing and some tourists taking photographs. 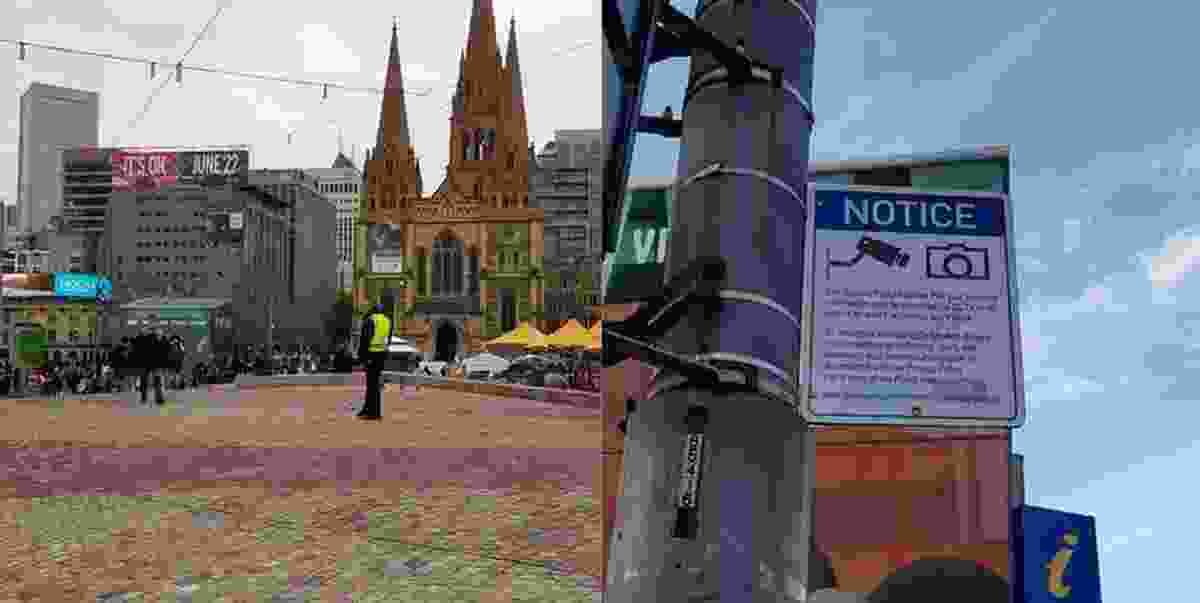 (Left) Security guards patrol and survey the square. (Right) You surrender your image rights by setting foot in the square 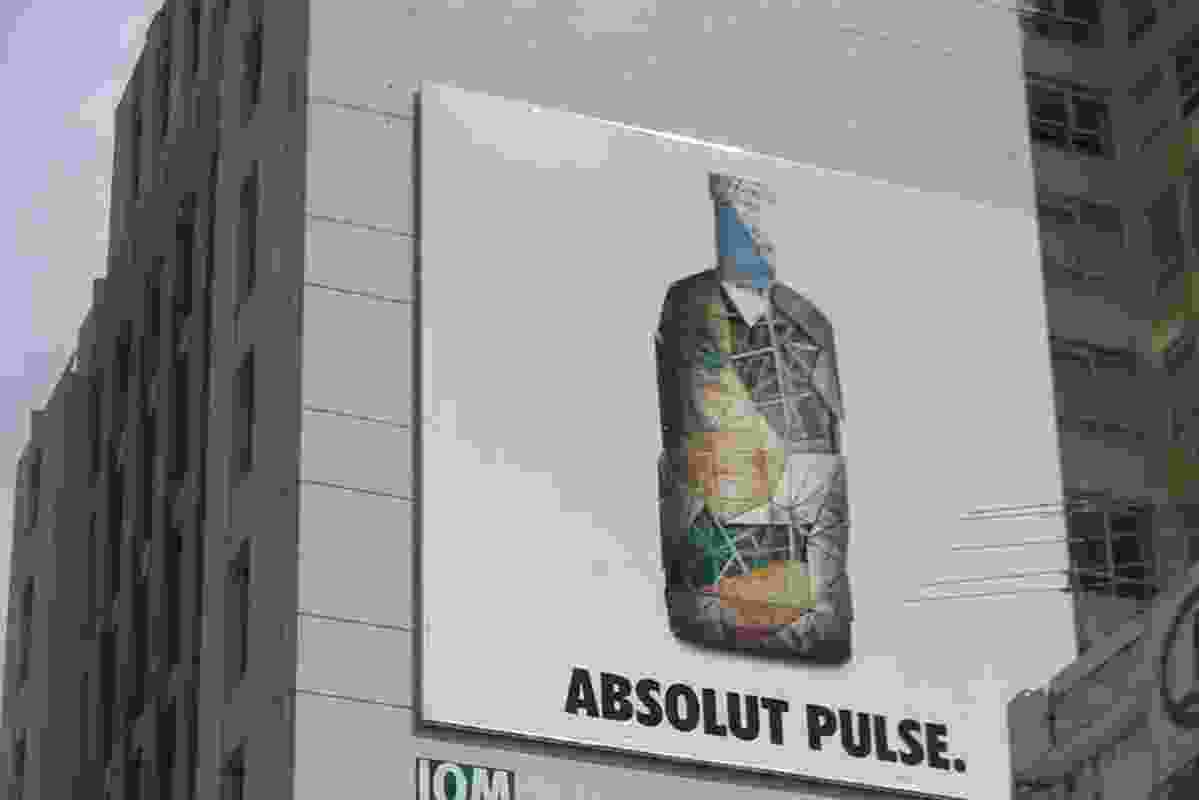 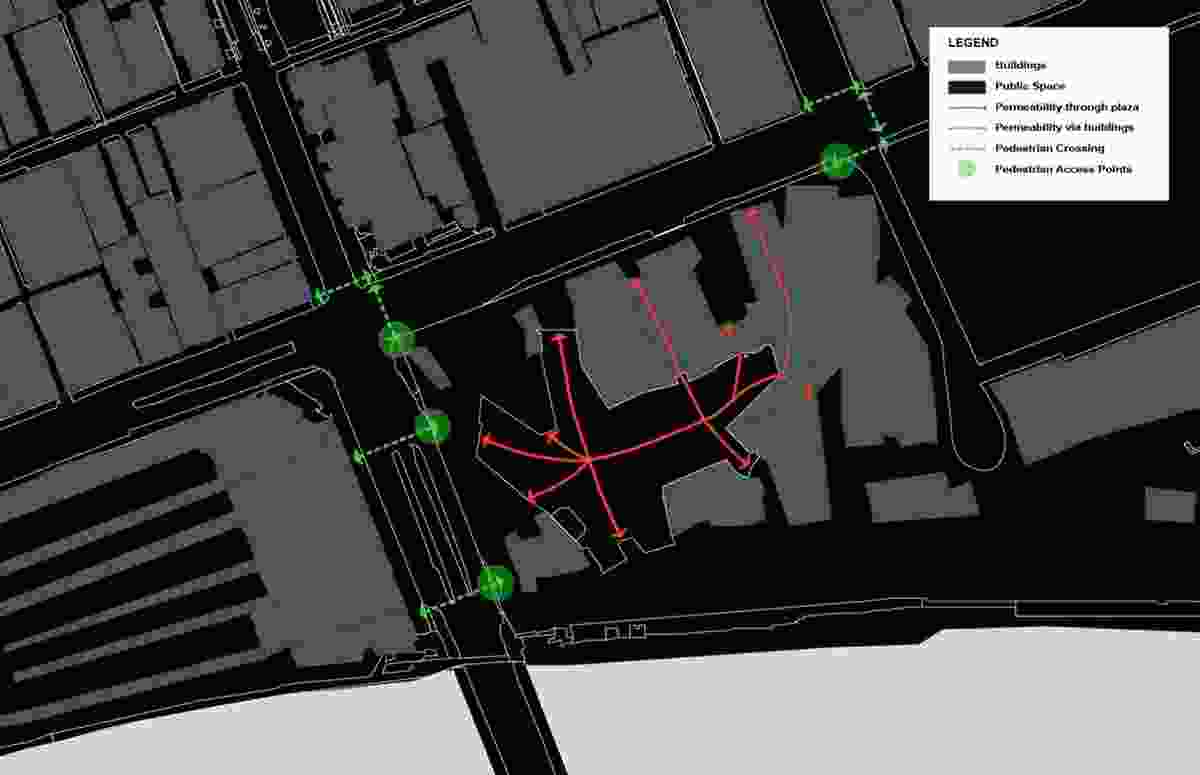 Connections with the CBD and Flinders Street Station limit access to Federation Square, whereas topography and lack of permeability limit access through it. The lack of connection to other destinations limits the desire to move through the square