Living in a harem with her mother and the other women of her extended family inside an enclosed courtyard in the city, guarded by a gatekeeper to prevent the members of the harem venturing forth into the street, Fatima Mernissi found as she grew up, that she had within her the hudud, or sacred frontier, separating women from men. To cope with this enforced seclusion, she and the other women escaped onto the forbidden roof terrace of her traditional Fez house, which, in time, became her own ‘terrace within’.

If this seems unduly remote from Lawrence Nield’s Ultimo Community Centre on Harris and William Henry Streets opposite the Powerhouse Museum in Sydney’ s inner west, it is not. Fatima Mernissi’s Fez house was a social centre for abandoned wives and their children safely removed from the predatoriness outside, and a forerunner, well before social planners conceived of the idea, of today’s community centre. If one sets aside the element of social coercion, it represents in a multiplicity of ways a more acceptable alternative because the harem’s members knew one another, and had more in common.

Glazed opening in the Spandek steel screen which shields the childrens’ play court from Harris Street.

Possibly by accident, or possibly by design, not only has the tribuna, or enclosed balcony for gazing at the street, been echoed by Nield’s windows standing out from the wall face on the outside, but he has also picked up other important features from Mernissi’s Fez house; namely the secluded courtyard and the rooftop terraces which are reserved for tennis and basketball play.

The explanation is quite simple: Harris and William Henry streets are filled with motor vehicles morning to evening. Turning the community centre into a secluded, internally oriented environment was the only sensible thing to do. However, if Nield had cut the building off from the neighbourhood, this would have negated its essence, which involved reaching out to the community and inviting it in.

Stairs from the courtyard to rooftop tennis courts.

Ultimo has borne the brunt of the Sydney business district’s overspill to the west in the 1990s, with the new casino at Darling Harbour and the redevelopment of Pyrmont for housing under the City West plan. The older Chinese community in the smaller terrace strips at the southern end of Ultimo had to be catered for just as much as the new casino croupiers and other staff and their children. Consequently, Nield has produced a genuine mixed development akin to Mernissi’s diverse household in 1940s Fez. This lends an untidy vitality to the whole building, with his tribuna windows sticking out like crabs’ eyes.

The windows semaphore the diverse activities within, they blink at the passer-by-‘come in, this is for you’.

You can find exactly the same tribuna window-balconies in Mallorca’s old Arab quarter of Palma. Jørn Utzon borrowed them for his Can Lis house in 1971. Sitting astride its cliff, Utzon’s deep framed windows point randomly out and survey the Mediterranean. Nield’s community centre does something similar in windows which lunge out at the city from several storeys above the street.

‘Active Hall’ on ground level next to Bulwarra Road.

The centre was initiated by the Sydney City Council to consolidate a hodge-podge of dispersed services; only later was the council assisted with government funds from the Commonwealth/ NSW Better Cities program. To meet requirements, it contains a wide variety of facilities, including a community hall, sports hall, administration and craft room, all on the upper ground level; a new Ultimo library and seminar rooms on the next floor, and a day care centre catering for 60 children on the third level. On the roof, a veil of chain wire mesh has blown upwards over the facade into an inverted veil around the two multi-purpose courts which replace the former games courts situated on Harris Street.

Thousands of motorists drive past the centre as they leave the city each day. Inevitably it is should be seen as dynamic architecture of the sort the Futurist Filippo Tommaso Marinetti envisioned would be seen from behind the wheel of a speeding car-which he wrote about as replacing Turin’s arthritic, ivy-bearded palaces while he and a new, youthful generation raced into the future accompanied by “the roar of famished motor cars beneath the windows”. Descendants of Marinetti’s roadsters dash past under the windows of Nield’s Ultimo Community Centre from early morning to the evening, the noise never abating-and architects have long since found replacements for the old devotions and smothered the ancestral ennui which provoked Marinetti.

The centre has a casual, improvised look which was worked out as Nield went along; as he dealt with each crisis, each shift in program, each emergency which had to be fitted into the package. This was demanding in itself and the consequence is not some minimalist jar of perfection where a misplaced matchstick would annihilate the harmony.

The architecture has its awkward moments which correspond to the awkwardness of everyday life. Nield has accomplished his aim, which was to give this community somewhere to come to make friends and find companionship. A centre such as this was sorely needed and Nield has heeded that call.

The diagonal projecting tribuna balcony on the community centre corresponds to the corner turret of the Glasgow Arms Hotel on the opposite side of the street. Around the corner, to match the fast-moving traffic in Harris Street, the east facade shifts into overdrive with streamlined, corrugated metal instead of the mellow orange Boral concrete blockwork on William Henry Street. On the third level, a tilted oval window permits children in the child care area to follow the hectic traffic below. The many tribuna windows jump about on the outside, unexpectedly picking up the activities inside and spelling them out externally with signs and graphics in a way that creates interest.

Happiness, for Fatima Mernissi, was inconceivable without her beloved forbidden roof terrace; so different in every way from the pointed European rooftops. Here, Nield also has stepped out of the European architectural orbit and found a new way to express what Mernissi described as her sacred frontier.

The plane separating inside and outside has remained a sacred frontier and a challenge which architects this century have explored in a host of alternative ways from total transparency to black boxes and every gradation in between.

This century, there was a desire to abolish the distinction between inside and outside by cracking architecture open and transforming it into an ultimate invisible bubble of environment. With this, the traditional wall with windows fell into disfavour. The value of vernacular architecture, and of examples such as the Fez house, is that they contain alternative ways of relating interior and exterior space that are subtly interwoven with the social fabric and respond to deep human needs, not only for protection and security, which recognise the need to belong. The extreme introversion of the Fez example was modified by the roof terrace and the tribuna projecting window.

Nield demonstrates at Ultimo that such models from vernacular architecture have a contemporary relevance. In modern architecture, with its overemphasis of spatial openness, technology and avant-garde art principles, form and space diverged greatly from the basic human psychological and social requirements. Vernacular architecture supplies a corrective. 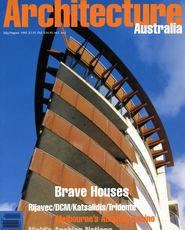