The Australian government's funding cuts to higher education is poised to slug students of five-year degrees, such as architecture, an extra $4,500. Worse still, the proposed “scholarship system” for post-graduate coursework will limit access to Master of Architecture programs. Sandra Kaji O'Grady argues these cuts, to be considered by the senate when parliament returns in mid-October, risk harming the global esteem of Australian architects, academics and graduates.

Studios at the Melbourne School of Design by John Wardle Architects and NADAAA.

When the Australian Government announced its Higher Education Reform Package in May, it was claimed to “deliver a more sustainable sector, more choices for students and increase transparency and accountability in higher education.” Like the language used by real estate agents to market housing, such assertions require us to parse them cautiously and to scrutinize the small print. Sustainability, of course, simply means that a smaller proportion of the taxpayer’s money would be directed towards tertiary education. Hence, one of the key measures being proposed is that there will be a “rebalancing” (their word, not mine) of the contribution made by a student to their education compared with that made by the government through what is called Commonwealth Supported Places, or CSPs. The government is proposing to increase the student contribution towards their tuition from an average of about 42 percent in 2017 to around 46 percent in 2021. For a five-year course, this is an increase in total student fees of up to $4,500 on a bill of around $50,000. Students will also begin to make repayments once the earn $42,000 whereas the current threshold is $54,869.

… Australian fees are already among the highest of any public university system in the world [and] there are more critical challenges buried in the package that are worrying architectural educators and should concern those already in practice.

Additionally, access to CSPs for most permanent resident visa holders and New Zealand citizens will be withdrawn.

The package has passed through the House of Representatives and will be voted on by Senate when it meets in mid-October. The national higher education peak body group Universities Australia has been vociferous in their opposition, noting that Australian fees are already among the highest of any public university system in the world. Degrees like architecture with a long training period and low initial salary may become less popular, but there are more critical challenges buried in the package that are worrying architectural educators and should concern those already in practice.

The package includes the introduction of a “scholarship system” for postgraduate coursework CSPs and proposes to reduce the allocation of CSPs for postgraduate coursework by 3,000 places a year. Medical coursework Masters degrees are exempted from this change, but not the Master of Architecture. The details of how the scholarships for coursework postgraduate study will be allocated are unclear, and this uncertainty is already starting to worry our students. There are approximately 10,000 students studying architecture at Bachelor and Masters level – this leads to completions of the professional Master of Architecture program of approximately 1,200 a year. The five-years it takes as a minimum to complete an architectural education, with the Master of Architecture as the professional entry degree, is now an international standard. The two-degree structure, culminating in the research-intensive, industry-aligned Master of Architecture, makes it possible for Australian architectural qualifications to be recognized globally. Reverting to the older Bachelor of Architecture as the professional degree1 might be a way to get around the new funding rules, but would leave our graduates out of step with their peers around the world and deter international students from coming here to study.

Architects are skilled professionals at the centre of Australia’s built environment industry, a $100 billion sector employing more than a million people. Our architects are among the best in the world, with contemporary projects regularly winning top honours at the World Architecture Festival (WAF). Of the ten shortlisted projects in the Health category of the 2017 WAF, three are Australian, including the new Victorian Comprehensive Cancer Centre by Silver Thomas Hanley, DesignInc and McBride Charles Ryan. Of 17 shortlisted contestants in the House category, seven are Australian homes. As we seek to project ourselves as a vibrant global destination for business and leisure, the role of quality architecture is growing more rather than less vital. Ironically, the prime minister himself recognized the growing value of architecture when he was Minister for Communications.

Weakening access to architectural education at this time, in an urbanizing and globalizing world in which Australian architects have made such a strong impression, is shortsighted to say the least.

This kind of global success reflects the quality of Australian architectural education and depends on in its continuity.

The built environment industry is significant for both its size and for the critical national role played by the provision of dwellings, commercial spaces, public buildings and infrastructure. The Architects Accreditation Council of Australia estimates that there are approximately 12,000 registered practising architects in Australia, about average compared with other developed countries3. There is also a similar number of paraprofessional/support staff. According to industry analysts IBISWorld, in 2015-16 the architectural sector generated an income of $7.7 billion, an increase of 1.0 per cent from 2014-15, creating a profit of $698 million. IBISWorld estimates that architectural services revenue will grow by an average 2.1 percent per annum to 2020-21, to reach $8.5 billion.

In recent years, the number of 457 visas issued for architects has grown to nearly 250 in June 2017, which may suggest a shortfall of suitable skilled local candidates. We sense this too, as educators with our graduates finding ready employment and many of our senior students in part-time employment in practices. Weakening access to architectural education at this time, in an urbanizing and globalizing world in which Australian architects have made such a strong impression, is shortsighted to say the least. Professional schools of architecture are already run on a lean basis, with fewer human and physical resources than needed given the vital subject matter taught. Many are cross-subsidized by other courses within universities since they are not funded at a level congruent with the cost of delivering an architectural education. Further cuts and disruptions to business models can only stretch things further, and risk harming the esteem in which Australian architects, academics and graduates are currently held.

1 Between 2006 and 2008, universities across Australian states and territories and the respective registration boards adopted the Bologna Process by changing the five-year undergraduate architecture courses into a two part three-year bachelor and two-year master degree program. 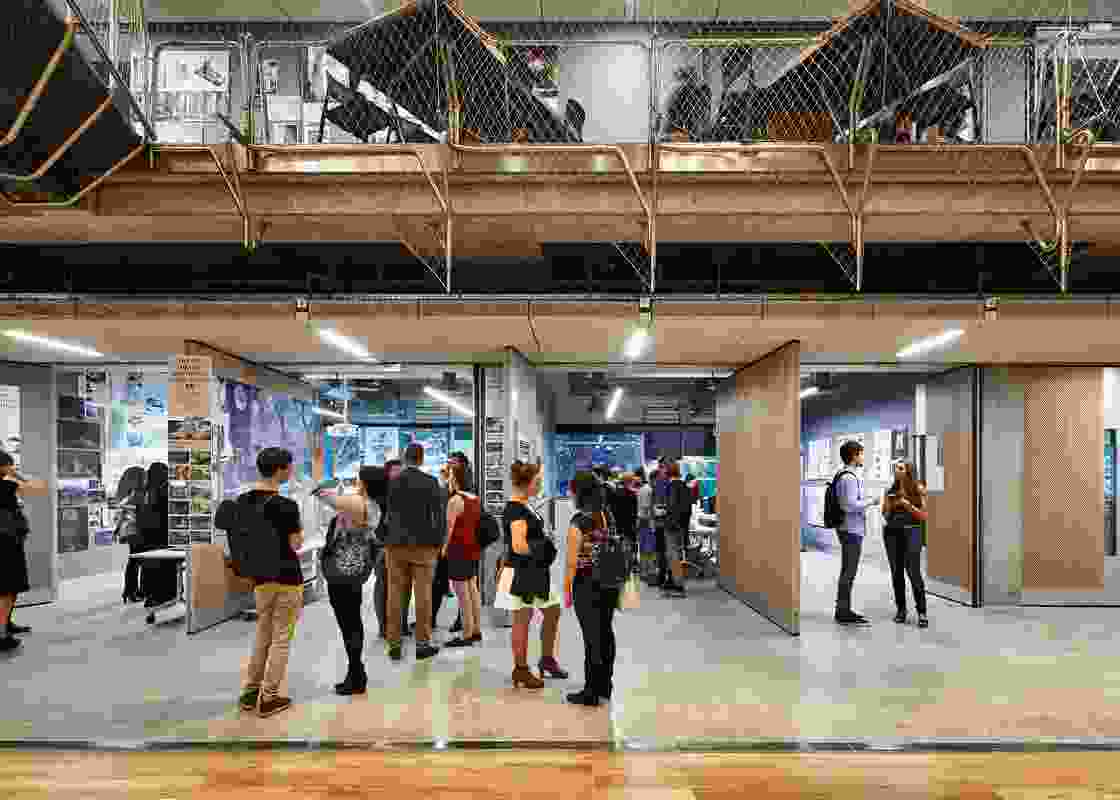 Studios at the Melbourne School of Design by John Wardle Architects and NADAAA.