Architecture in the coming age of Artificial Intelligence

Instead of unthinking digital drafting boards, our computers could soon be intelligent partners in design – first, though, they’ll need to figure out how to fold a shirt.

Our computers could soon become intelligent enough to perform creative tasks. Artwork from Banksy’s “Better Out Than In” October 2013 New York City residency.

Last month I shook hands with the future. Well, it was more of a pincer than a hand, but it was definitely the future. This pincer belonged to BRETT, the Berkeley Robot for Eliminating Tedious Tasks, created by the UC Berkeley People and Robots Initiative. I interrupted BRETT tying knots in a thick piece of red rope. His real trick though, is to do the laundry.

While laundry may be an annoying chore for us fleshy humans, for a silicon-brained robot, it’s insanely difficult, comprising a complex series of steps in a messy real-world environment. Watching BRETT in action – it takes about ten minutes to fold a single towel – is sure to dispel any fears of a Terminator-style uprising any time soon. But BRETT is part of a new approach to artificial intelligence known as ‘deep learning’, where instead of tasks being pre-programmed, the system is able to train and improve itself based on experience.

Deep learning, combined with exponential advances in computing power, has ushered in a new age of breakthroughs in artificial intelligence research. Previously insoluble problems such as computer vision, speech recognition and natural language have been cracked, leading to new technologies we take for granted, such as Siri, and new products on the near horizon, such as driverless cars.

All of this has me lamenting the state of computing in architecture. Sure we have BIM, but what is it but an elaborate system for representation? Despite the efficiencies it offers in terms of accuracy, communication and fabrication, it would be a stretch to call BIM ‘intelligent’. Sure, some environmental analysis packages, parametric plugins or rendering engines are able to do things that would be unthinkable with paper and pen, but all the decisions are led by the designer. Does the ‘A’ in CAD really live up to its promise? Our architectural machines cannot think for themselves, let alone aid us, as the acronym suggests.

It wasn’t always meant to be this way. In 1969, the architect Nicholas Negroponte – who would go on to found the MIT Media Lab – published a book titled The Architecture Machine. In it, he speculated on the various possible futures for architectural computing, setting out three possible ways in which machines could assist the design process:

(1) current procedures can be automated, thus speeding up and reducing the cost of existing practices; (2) existing methods can be altered to fit within the specifications and constitution of a machine, where only those issues are considered that are supposedly machine-compatible; (3) the design process, considered as evolutionary, can be presented to a machine, also considered evolutionary, and a mutual training, resilience, and growth can be developed.

We have certainly achieved the first two, while Negroponte’s vision for this third possible future remains largely unfulfilled. He describes a relationship between the architect and the computer as one “not of master and slave but rather of two associates that have a potential and a desire for self-improvement.” Imagine a digital colleague proposing design alternatives, keeping up with a free-flowing conversation.

Negroponte’s dream of what a computer designer might look like is clearly tinged by the optimism of the dawn of artificial intelligence research, when rapid progress and success seemed all but inevitable. However, it would be decades before Deep Blue would beat Gary Kasparov at chess, and decades more before computers could accomplish real-world tasks we take for granted, like driving a car. The history of artificial intelligence is awash with popped bubbles of expectation, so-called ‘AI Winters’ of disillusionment and discontent.

Could a super intelligent machine navigate the billions of needs, desires, ambitions and ideas that make up the contemporary city, to iron out inequality and injustice?

But many argue that we are now at a tipping point. Nick Bostrom, director of Oxford University’s Future of Humanity Institute, believes we may be on the cusp of an “intelligence explosion”, where a digital mind with a capacity to learn will rapidly advance into the realm of the super-human. This machine could then design its successor, “Thus the first ultraintelligent machine is the last invention that man need ever make”. Bostrom estimates the likelihood of this happening in the second-half of this century as 90%. Negroponte’s vision of an intelligent architectural sparring partner may not be too far away.

Assuming the technology is within reach, what would be the use for such a machine in architecture anyway? Negroponte saw his speculative super computer as potentially able “to exhibit alternatives, discern incompatibilities, make suggestions”. Perhaps most interestingly, he also thought it might be capable of “overseeing the urban rights of individuals.” This is an entrancing idea. Massive urban agglomerations are extremely complex terrains to negotiate for architects, planners and mayors, riven with inequality, distorted by power and conflicting incentives. Could the issues facing our cities be solved by deferring to a higher authority standing for the common good? Could a super intelligent machine navigate the billions of needs, desires, ambitions and ideas that make up the contemporary city, to iron out inequality and injustice?

Unfortunately, ethics are the one thing our machines are unlikely to master in the near future. As Bostrom writes in his book Superintelligence, “There is no reason to expect a generic AI to be motivated by love or hate or pride or other such common human sentiments: these complex adaptations would require deliberate expensive effort to recreate in AIs.” Oh well.

Where does that leave us then? We’re likely to keep our jobs, for one thing. AI will be no silver bullet, but with the heavy-lifting taken care of by machines, architects can devote their attention to the uniquely human considerations of city-making. They can stand as custodians of the built environment, advocates for a more just city, for public space, and help our digital super brain navigate the complex emotions that define the ways we live together.

Architecture in the coming age of Artificial Intelligence 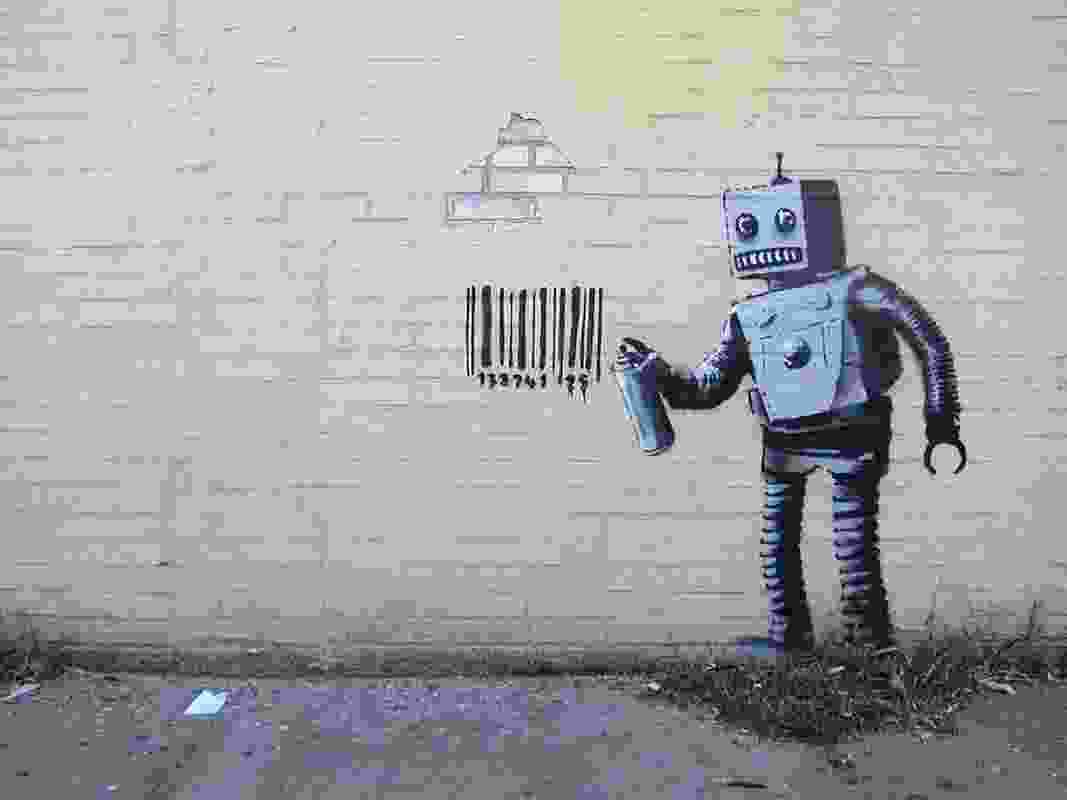 Our computers could soon become intelligent enough to perform creative tasks. Artwork from Banksy’s “Better Out Than In” October 2013 New York City residency.