ARM Architecture and the big public

I’ve heard some people call Storey Hall “the Martian’s arsehole,” which, although it sounds impolite, is the kind of nickname ARM would take as a compliment. ARM’s is an architecture that wants to escape the pages of a magazine and enter into the local vernacular. It wants to appeal to the dog walkers, schoolkids, bicycle couriers and tram drivers, the sleep-deprived students and greasy dishwashers. It wants you to say “I’ll meet you under the green brain,” or “it’s the one with the huge face on it” or “outside the big stone book.” It wants to become a landmark or a myth. It wants to reach out to the big public.

In Melbourne, this big public is particularly hard to pin down. It’s a mongrel culture, one in which it’s not uncommon to go to the MTC on a Friday night and the MCG on a Saturday afternoon. The distinctions between high and low, centre and periphery, city and suburb, are blurry at best. This is the space ARM makes its home.

An awareness of this big public is already visible in the practice’s early work. ARM’s renovation of the Holland Court Housing Commission flats (1995) subverted the no-frills aesthetic of this 1960s tower. They installed a glamorous new foyer, gold elevators and a lift overrun in the form of Oscar Niemeyer’s Church of St Francis of Assisi in Brazil. Howard Raggatt, interviewed in 2000 for the ABC series In the Mind of the Architect, argued: “I think to give [the residents] a bit of style is actually one of the best things you could give them. I mean probably the rich don’t really need style.” Here, seemingly extraneous adornment – and public money – is deployed to lift spirits and to provide material for the collective memory of a neighbourhood. This simple gesture contains a radical proposition: architecture is not mere problem-solving, it’s about creating something to talk about, something to locate us in this world.

This approach is taken to an extreme in RMIT’s Storey Hall (1995). This building seeks to make sense of Melbourne’s past and present by hoovering up all the outcast elements of the city and, by some strange alchemy, patching them together with cosmic mathematics into a spiky whole. The purple sash of the suffragette movement, the green of the site’s Irish Catholic origins, the exiled Yellow Peril sculpture and the ceiling of the Griffins’ Capitol Theatre are all collided with Roger Penrose’s obscure mathematical theories, as if in a particle accelerator. All these references are right there on the surface, hidden in plain sight, waiting to be unpacked and unravelled by the public. Sitting in the auditorium is like being lectured to twice, once by the speaker and once by the building. And yet despite these competing voices, the result is light and unburdened, its gaping maw stretching up towards the sky.

At one point Storey Hall was thought to be too much for the public to bear. Robert Maclellan, the then Minister for Planning, insisted the building be built behind a screen and only revealed upon completion, as if protecting passers-by from glimpsing a hideous birth. Speaking on In the Mind of the Architect a few years later, he conceded: “I was wrong. I was wrong in my first appreciation of the building. I was wrong in my understanding of Melbourne’s ability to deal with contemporary architecture, and I owe them all an apology for that.” ARM knows that in Melbourne, with its mongrel culture of fuzzy highs and lows, even an academic building such as Storey Hall can somehow transcend its burden of sources to become an object of the public imagination.

More than any other project, the Shrine of Remembrance (stage one completed 2003, stage two completed 2014) treads into the territory of the big public. Forming the backdrop to the flanks of diggers at the dawn service, the bugle of the Last Post echoing off the giant stone steps, this is at once a sacred space of memory and ritual, and a focal point of the uglier jingoism of Australia’s right-wing nationalists. How do you intervene in such a loaded context? What form could possibly satisfy this burden of expectation? In their monograph Mongrel Rapture, the architects describe “looking for a new way in … it had to be something of a different kind, instead of grand, instead of monumental, instead of heroic, even something empty, something ready, like something awaiting germination.”

They arrived at the form of the star, its profile used to create new entry courtyards into the crypt beneath the Shrine, addressing the building on its diagonal axes. But what kind of star? Even this seemingly arbitrary shape is burdened with association. How many points should it have? “Who would these stars stand for, whom would they signify, and whom would they condemn.” In this line of questioning lies an acute sensitivity to the power of architecture, to the power of architectural form and material to stand for the big concerns of a big public. There’s an awareness of a polity, an acknowledgement that these shapes are always for the city and that designing them comes with the responsibility of shaping the collective public memory.

But what about a site where this public memory is diffuse, with nothing so substantial as two world wars to cling to? The Geelong Library and Heritage Centre (2015) seeks to create a new context in a place that has been steadily drained of one. Comprising a six-storey concrete geodesic sphere that has been chopped into to reveal a blue glass crystalline interior, the building is without precedent or rational justification. How could such a foreign object – with no discernible link to the local culture – possibly engage a disinterested public? The librarian I spoke to seemed thrilled with the take-up. “We had 300 kids of all ages in here on the weekend, they come here just for fun.” Again, ARM has tapped into something counterintuitive about how best to build for the big public. Our second-tier cities and struggling regional centres don’t need gentle sophistication or pandering to; they need the volume turned up. The Geelong Library is a new planet with a new gravitational pull, sucking in the public and giving them something new to chew on. ARM understands how architecture functions in society: it dares you to have an opinion, to take a position. But it also wants to be forgotten, to enter into local folklore. Despite the colours and the shapes, it wants to form part of the background to daily life, to get you to say without thinking, “I’ll meet you at the new planet.”

ARM Architecture and the big public 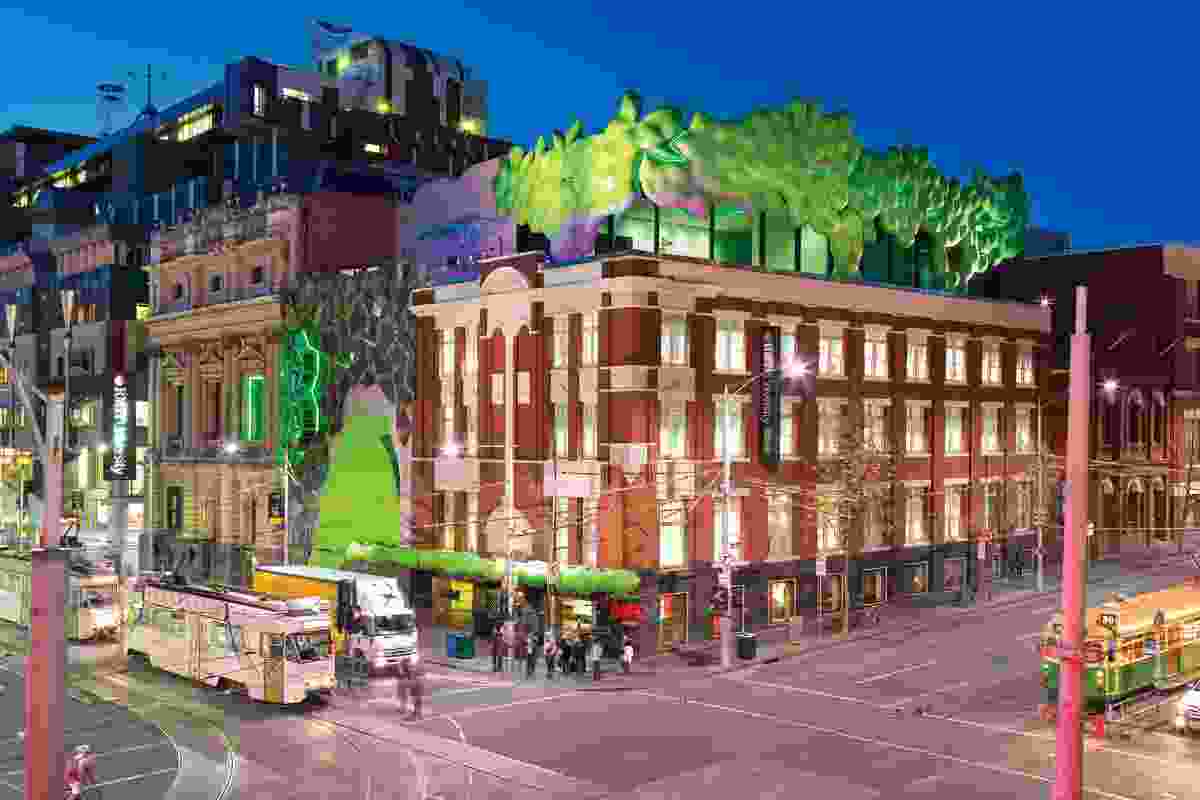 The interior of Storey Hall, a buiding which “hoovers up all the outcast elements of the city and patches them together with cosmic mathematics into a spiky whole.” 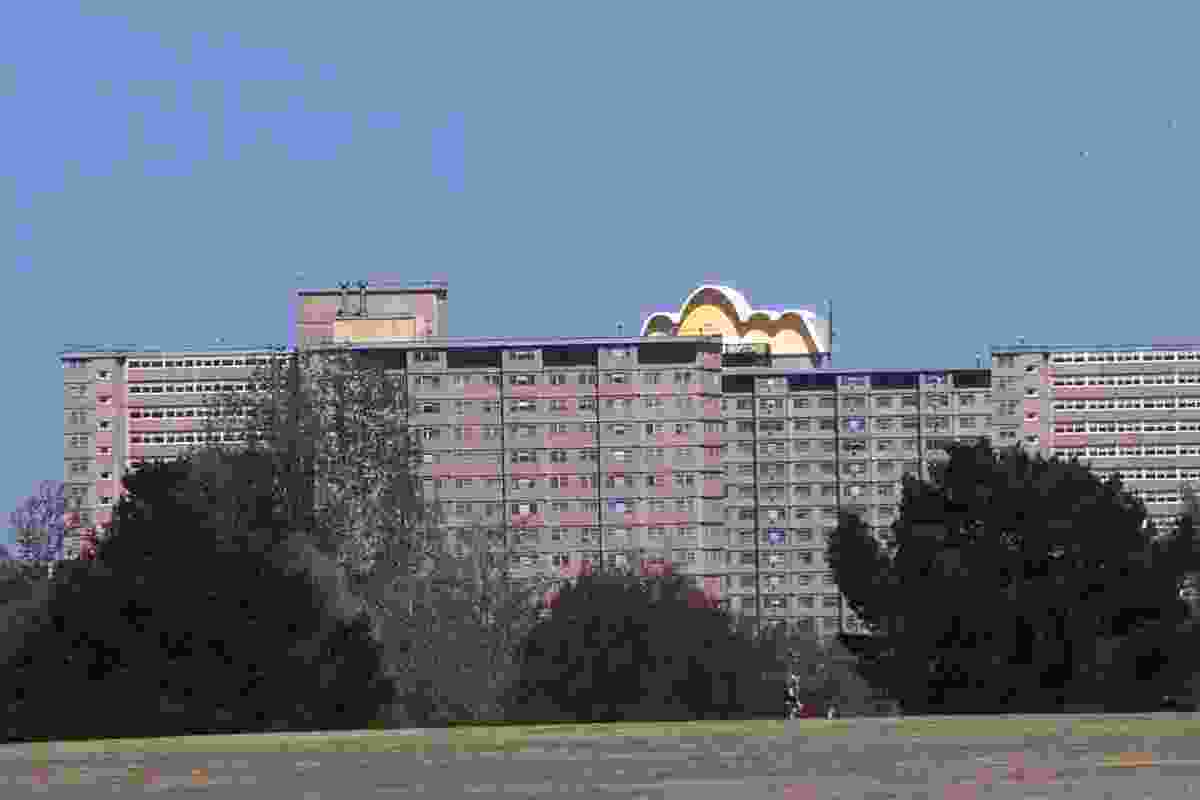 Holland Court Housing Commission flats, Melbourne (1995). The lift overrun at the top of the 1960s tower borrows its form from Oscar Niemeyer’s Church of St Francis of Assisi in Brazil. 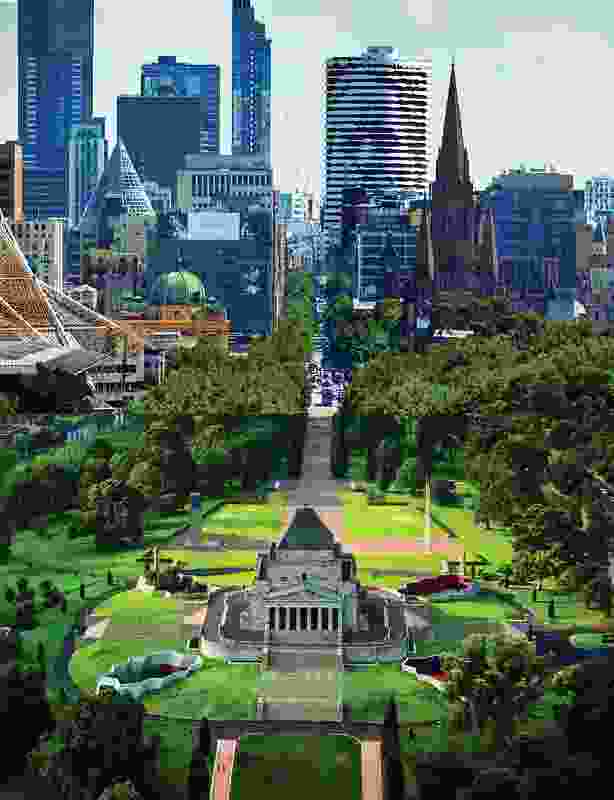 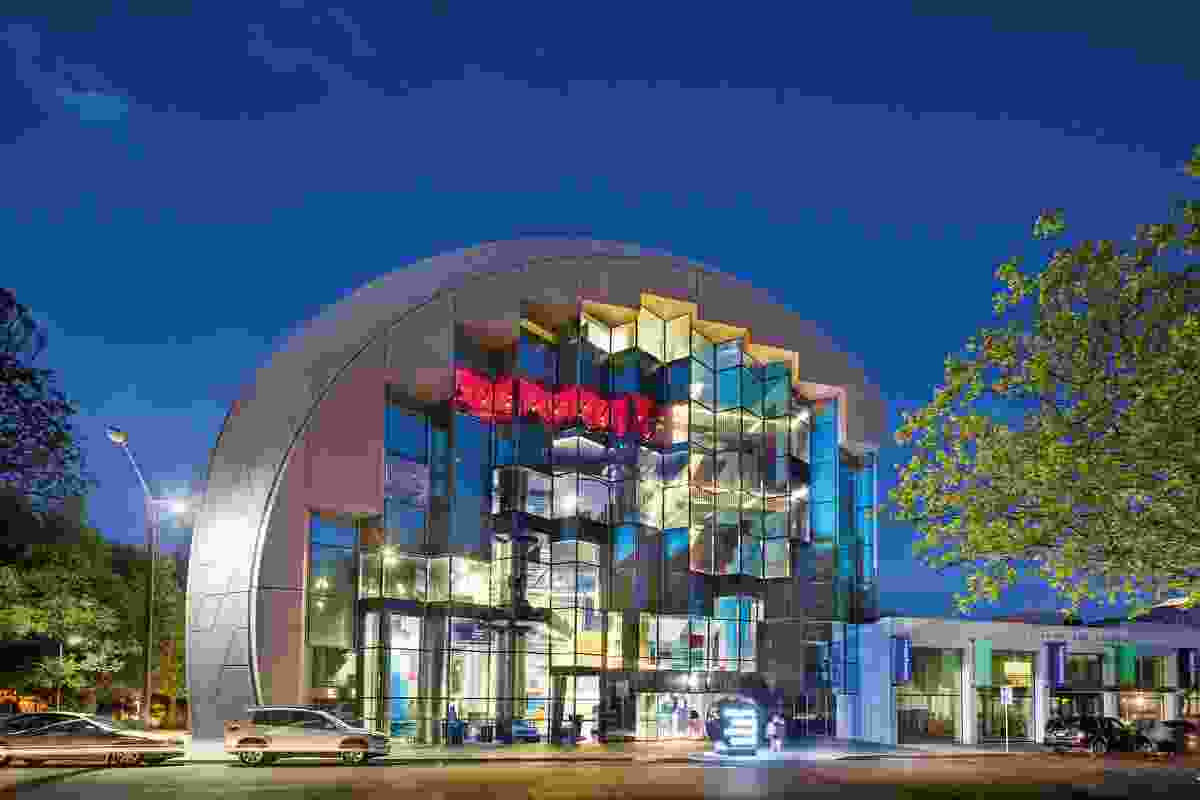 Geelong Library and Heritage Centre (2015), a six-storey concrete geodesic sphere that has been chopped into to reveal a blue glass crystalline interior. 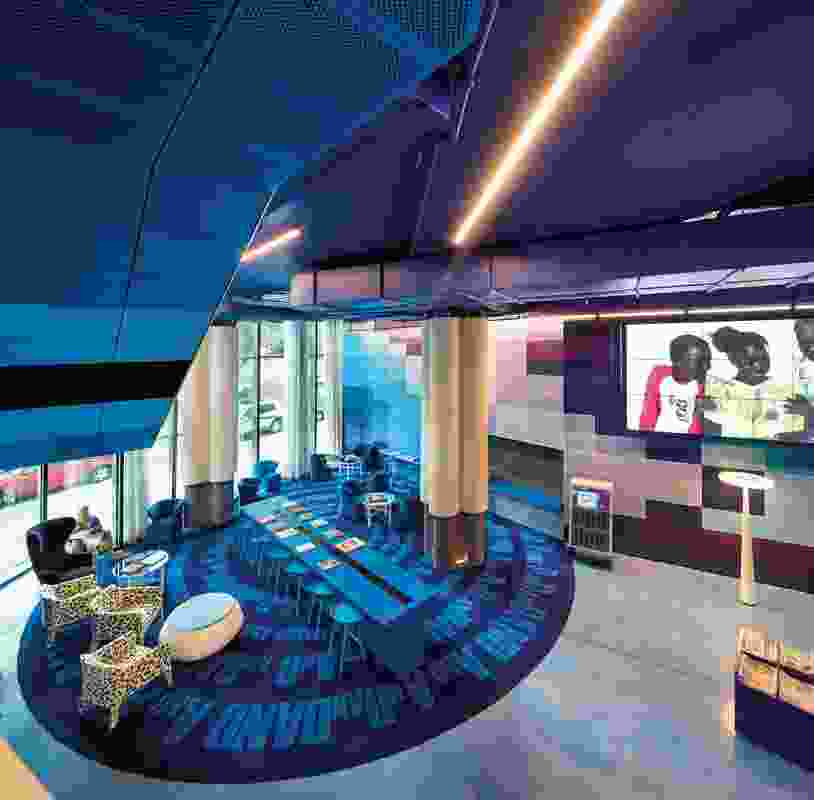 The ground floor of the Geelong Library and Heritage Centre. 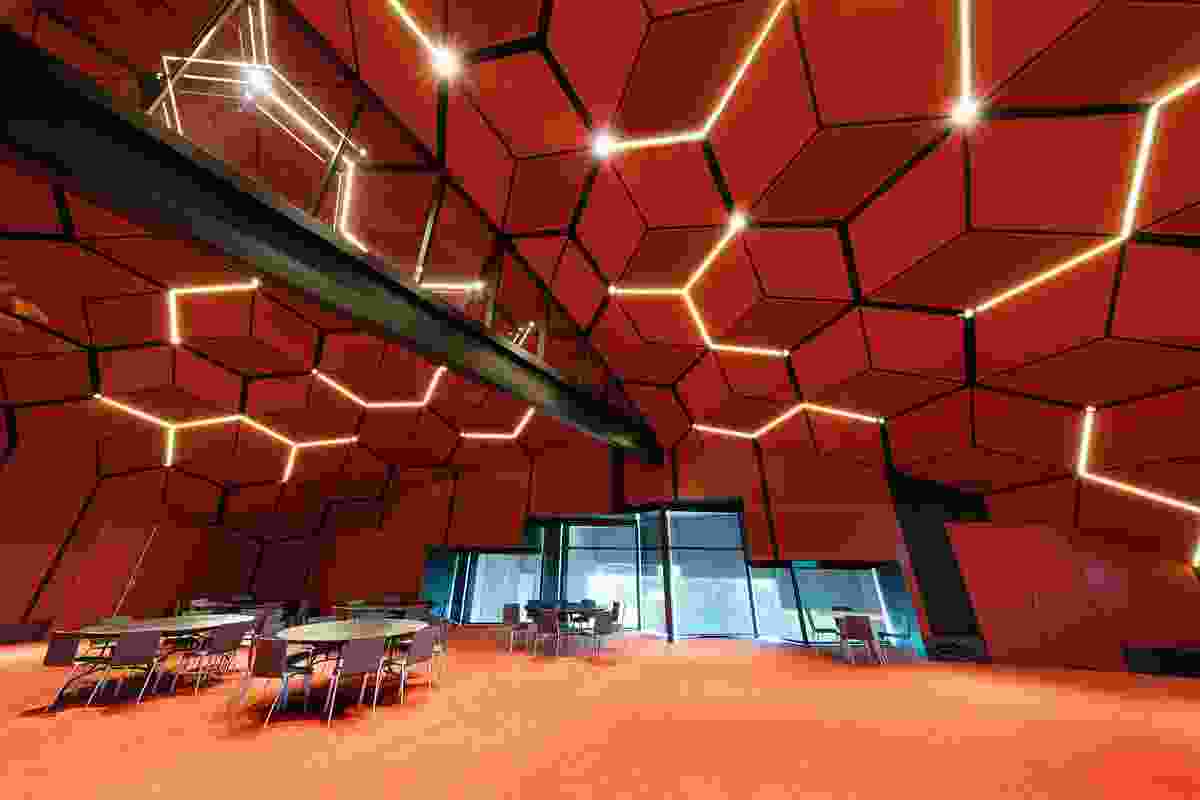 The function room on the top floor of the Geelong Library and Heritage Centre alludes to the domed form of the building.