Conceived as a celebration of granite, this home by B.E Architecture simultaneously evokes a sense of solid permanence and a contradictory feeling of lightness and warmth.

Australian houses are generally lightweight in their construction, especially in comparison to European homes. The Armadale Residence by B.E Architecture is an exception to this rule: constructed from solid granite, this house is heavy. In fact, it’s 260 tonnes heavy. When walking through the home, you are aware that it has solid foundations and a sense of permanence. However, elements of the form, materiality and details simultaneously create a contradictory atmosphere of light-ness and warmth.

The owners were downsizing from a large family home and wanted a house that would suit them now, including accommodating visiting adult children, as well as into the future. Situated on a prominent site in the inner-Melbourne suburb of Armadale, this home needed to be a private sanctuary, shielded from the many cars taking a short cut through the area’s backstreets. The idea of creating something “quite protective” but “with as much light as possible” emerged as a brief, and the choice of material evolved from these parameters.

Armadale Residence is clearly a “celebration of granite,” as described by Andrew Piva, one of the directors of B.E Architecture. It presents to the street as a bold form of two blocks of granite, one cantilevered over the other. “We like to give our buildings a sense of gravitas,” says Andrew, explaining that the practice often looks to civic buildings as reference points.

The primary material chosen for a project by B.E Architecture – in this case, granite – informs the form. “It wasn’t like cutting butter, but we could start thinking about it like that,” says Andrew. The stonemason executed the detailing of the stonework with absolute precision, concealing the stainless steel flashing so that there is a clean edge to the granite. The natural texture and irregularity of the split-faced stone refract and reflect light across the surface, breaking down the mass of the external form.

The external material palette is carried throughout the interior of the dwelling. The floors are in granite, and the bathrooms are fitted with custom-designed granite sinks and baths that have been engineered from solid blocks of stone. The internal proportions are generous, yet the layout of the home is efficient. The main living space is open planned, with the neutral palette receding to announce a large, circular, custom-designed light fitting. A stainless steel kitchen is contained within one corner of this north-facing space, with the living areas spilling out onto a terrace whose perimeter is defined by a large concrete beam overhead. This beam also serves to frame the greenery and block out views to the neighbour’s home.

Hidden at the rear of the site, and accessed via narrow steps from the terrace, is a pool. On one side this body of water is contained by the house itself and a small Juliet balcony pushes out from the living space to cantilever over the pool. Being in this space feels remarkably similar to being in Europe.

A small media room offers retreat from the main living spaces, providing a cosy space to cuddle up on the custom-designed sofa. Other secondary spaces, such as the study and extensive pantry, were designed with the same appreciation for materiality and detailing as the main living areas. Although designed with a consistent material palette and a clearly defined form, this house is consciously intended to avoid the label of “minimal.” It is a house for living in and not to be too precious about.

A touch of drama was added to the vertical circulation path – a circular skylight throws natural light onto the textured concrete walls containing a spiralling stair. Upstairs, the main bedroom has a view to a mossy, planted courtyard, similar to the way Japanese homes contain and frame nature. This private outdoor space is also accessible from the main ensuite and includes an outdoor shower. The greenery softens the textures of the stone; landscaping plays an important role in the design of the home generally. This outdoor space also allows soft light to filter into the ensuite and bedroom.

The northern windows to the bedrooms on the upper level are all protected by custom-designed automatic timber shutter screens that can be moved according to the direction and intensity of the sun. At this house, “it’s about bringing the light inside, in the right ways,” says Andrew. From the exterior, the shutters are inset into the granite and where there are no windows, the timber cladding continues along the facade to form a strip of texture that complements the stone.

The use of granite, while monumental, isn’t oppressive. There’s also something refreshing about the weight of its construction, perhaps because it’s so unusual for Australia. Every architectural element is considered, without a reliance on any current trend or style, making this home refined and elegant. While new, the house gives the impression that it has been on its site for a while – and that it will be there for a long time to come. 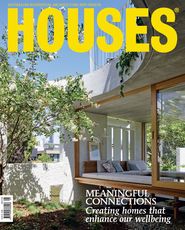 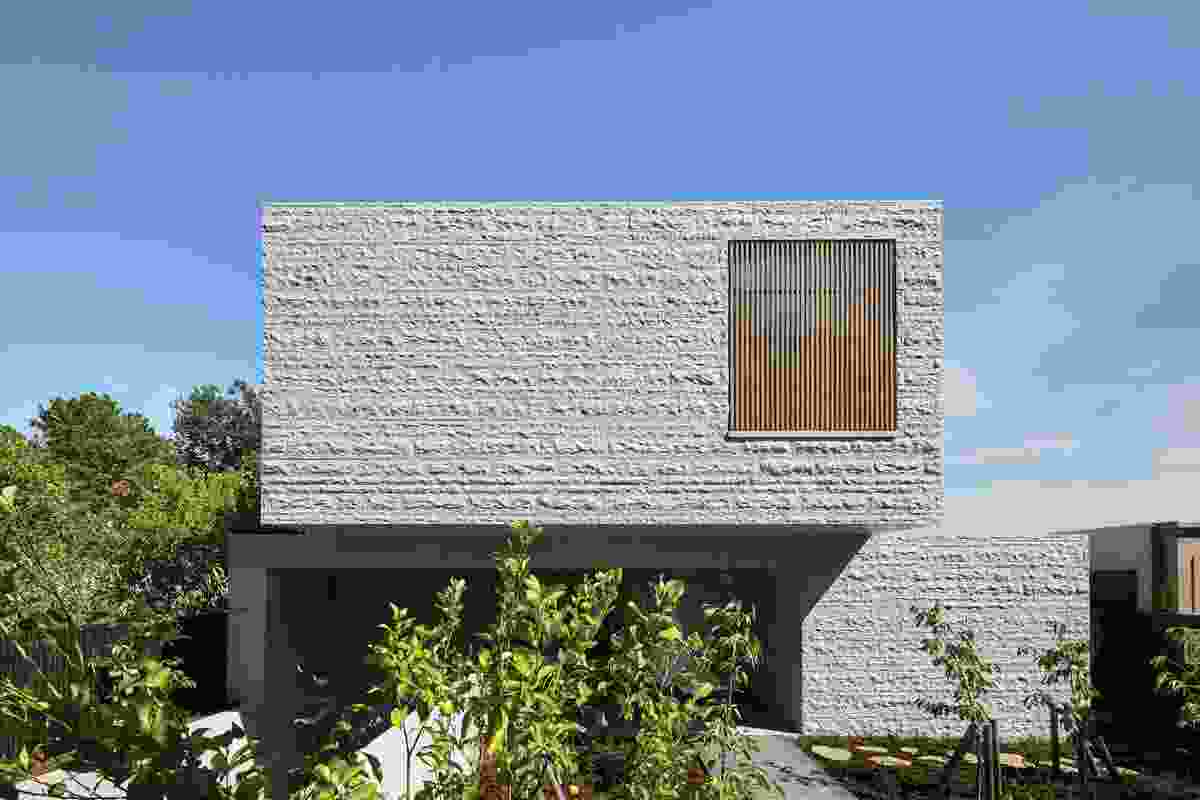 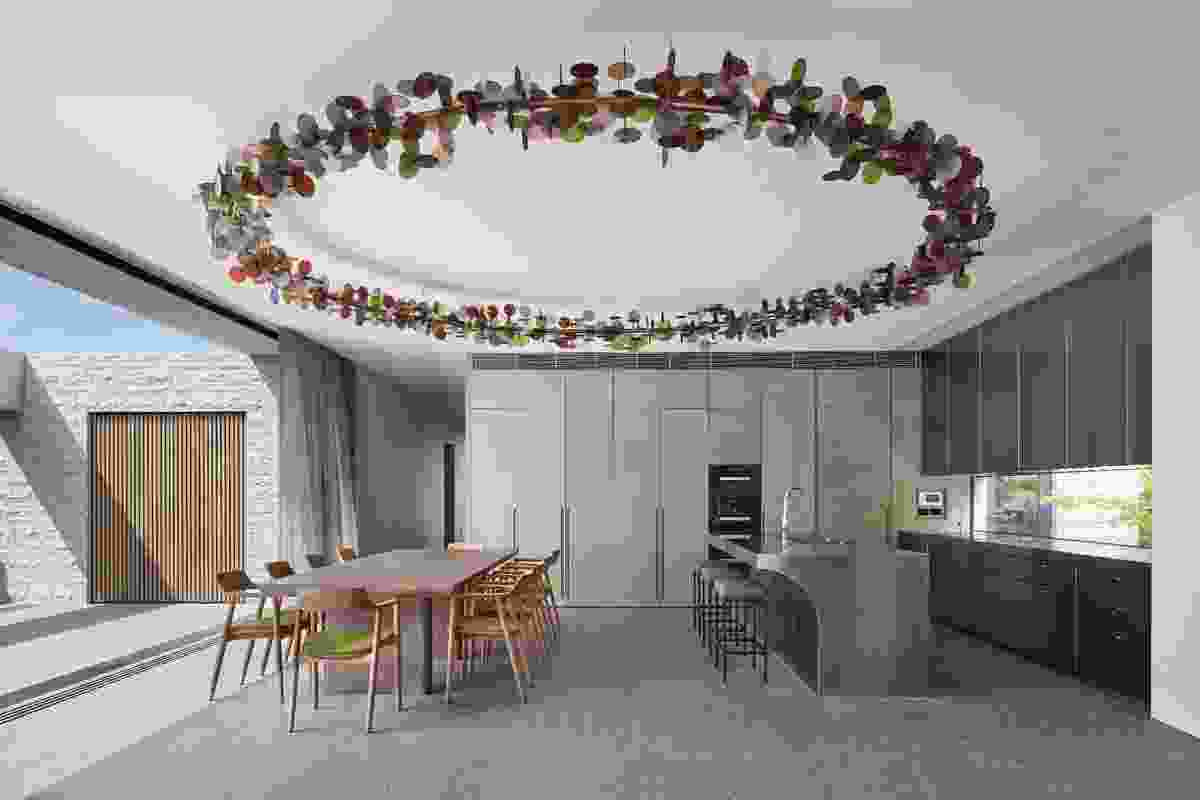 A large, custom-designed light fitting stands out against the living area’s neutral tones. 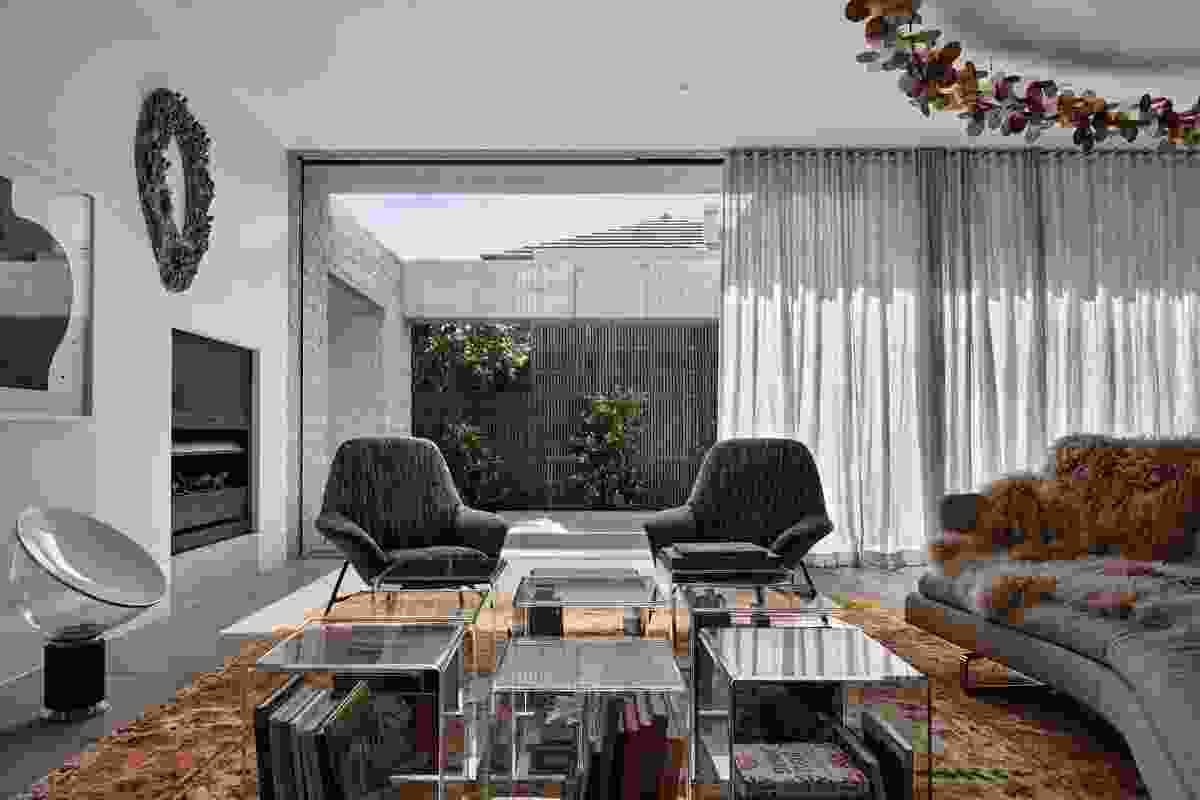 Despite its clearly defined form and consistent palette, the house eschews minimalism. 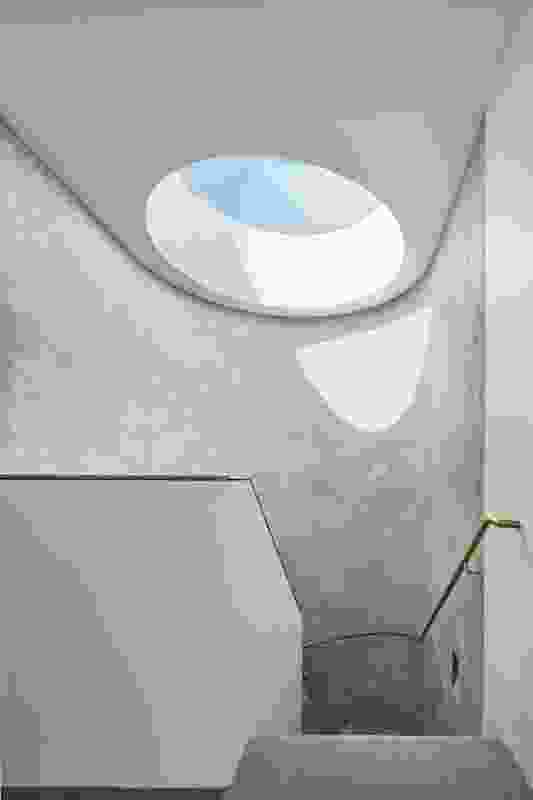 A dramatic circular skylight throws light onto the concrete wall of the spiral staircase. 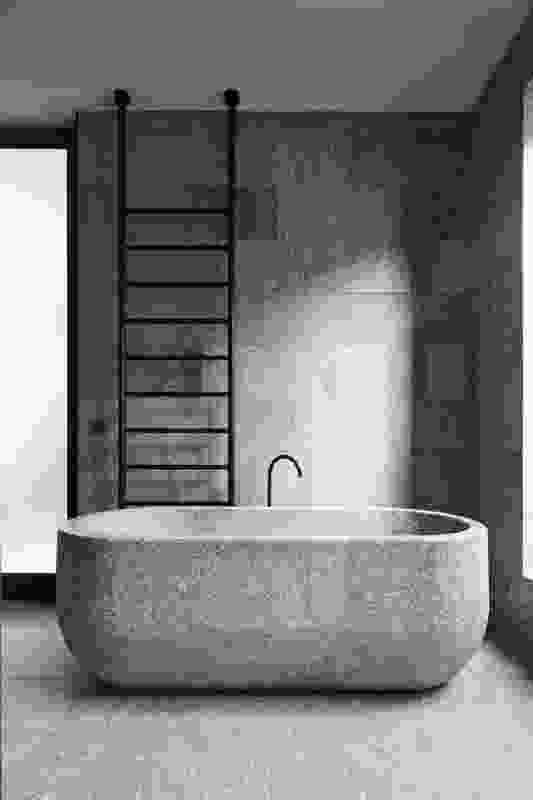 The external palette continues inside, with granite floors and baths carved from solid stone. 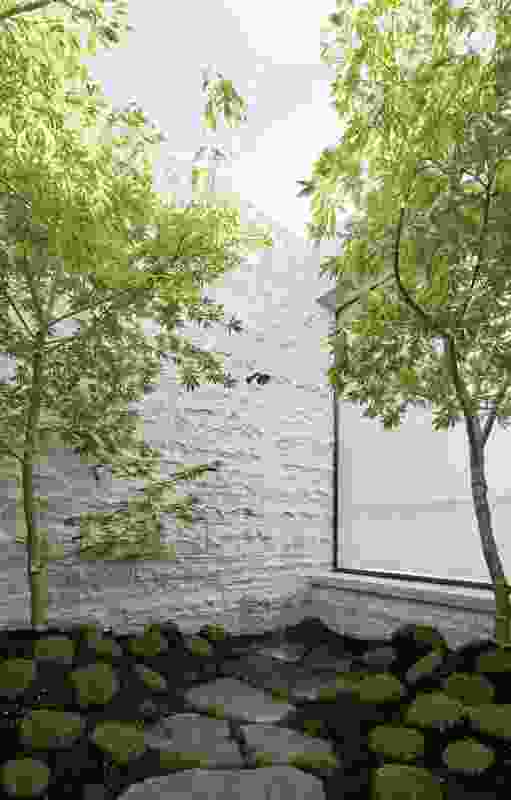 A Japanese-style courtyard on the first floor frames nature for the main bedroom and ensuite. 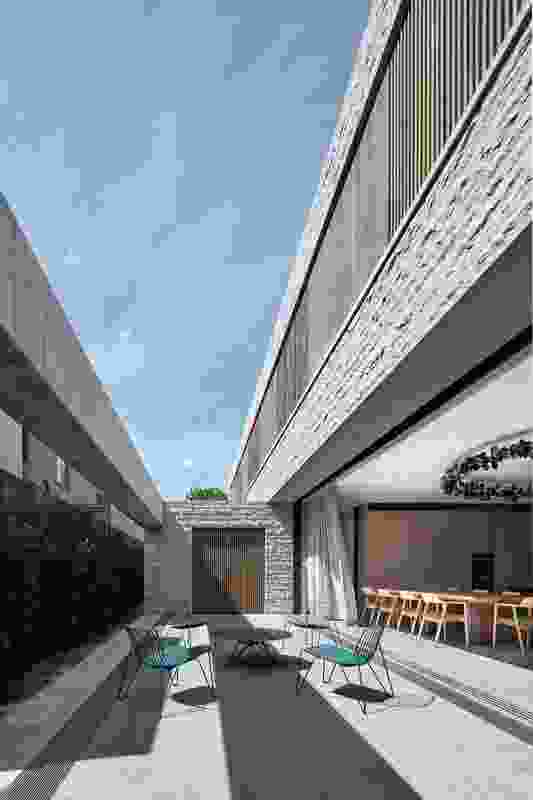 The living area spills out onto a large terrace, whose perimeter is defined by a concrete beam. 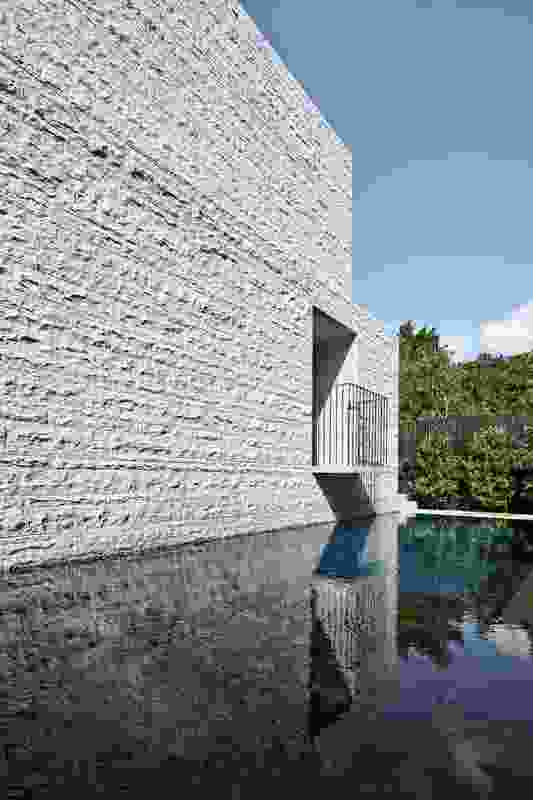 A Juliet balcony looking over the pool feels more European than Australian. 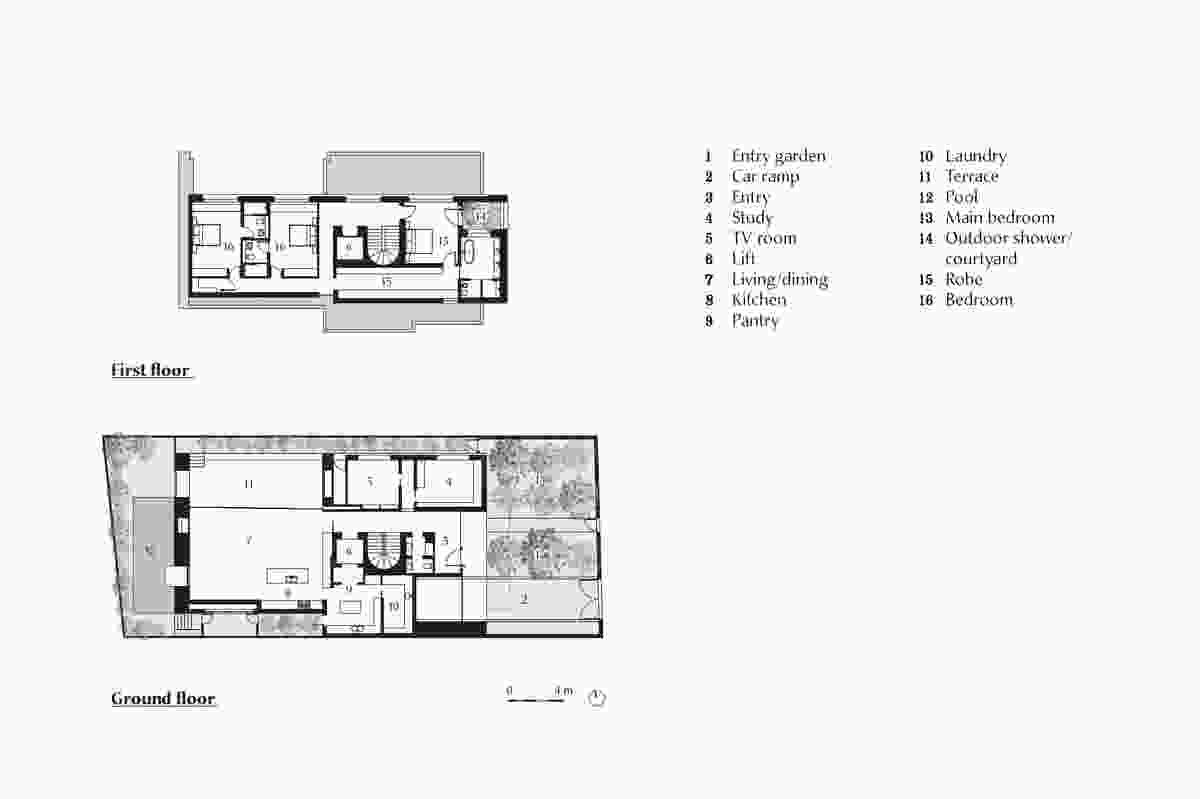