The rebuilding of soldiers by S2F.

The mess hall features a sawtooth roof and is shaded on three sides by an oversized timber-clad verandah.

Driving out of the main street of Wagga Wagga, I was immediately surrounded by views of the remarkable Riverina country of south-west New South Wales. After travelling ten kilometres from the city I arrived at Kapooka, a training centre known as Home of the Soldier, the first point of call for Australian Army recruits. After registering my identity at the security gate, my guide drove me to what felt like the centre of the site: an open, bush setting for the generally modest brick Defence Force buildings scattered in the undulating landscape.

When we reached the clearing I was struck with awe by the monumentality of the recently completed mess hall and nearby 360-bed Echo Company barracks. The vast mess hall can seat 1200 people and this sheer scale is reflected in the massive sawtooth roof, designed to let the sunlight in and give a sense of orientation within the expansive interior. The building is shaded on three sides by an oversized timber-clad verandah, which also provides a social space. Echo Barracks is equally impressive, with the deeply profiled roofing standing to attention like a smart cap, adding to the sense of occasion.

Two things became clearer as I learned more about the background to the construction project and the experience of recruits. Firstly, these buildings are like oversized houses because, symbolically, they house the collective, not the individual. Secondly, the architecture has a role in the recruits’ journeys, and recognition of this role is growing.

Kapooka is the foundation stone of and initiation to the army’s “raise, train, sustain” triumvirate: it is the raise stage. It also acts as a filter, “breaking down” and as the course progresses “rebuilding” potential soldiers. Recruits who live and train at Kapooka over a period of about twelve intensive weeks go from being a (usually) green young person to an individual who has been pushed through their physical and mental limits. They are taught new skills, from how to polish brass, wash, get dressed and make beds in record time to bayonet assault and marching long distances in teams negotiating the weight of heavy packs.

I asked a former recruit, Warrant Officer Duncan Bicket, for his first impression. “It’s meant to be a daunting Spartan imposing institution when you get there. The accommodation is rudimentary – it is meant to be to break you down.” It had been tough, and Warrant Officer Bicket was sure things had changed since he was a recruit, but he also spoke with great respect for the soldiers and about Kapooka as a marker of history. Another former recruit agreed, telling how the parade is held on hallowed ground and explaining the meaning of the salute as a symbolic gesture of respect. “What one learns here is how to do things for yourself and hold yourself in high-stress situations.” And there is pride in these achievements.

There is no doubt that this is a unique place. The brief, the types of buildings and the activities are specialized and it takes an open and willing mind to meet the Defence brief, to fit in with the existing buildings and topography and offer something beyond the prosaic. The existing buildings are basic: no frills. This is what, on the surface, is required – functional, low-maintenance, value-for-money structures and facilities. Yet the culture at Kapooka is complex, being developed and steeped in history. It is not without symbolism and ritual, all things that feed architectural expression. Good architecture reflects and supports the culture and values of a place, and this is a unique example, which the architects, S2F, have embraced. The architects understood the brief – “the recruits are trained to be ‘put in harm’s way’” – so the design sought to articulate this toughness. S2F also looked for ways of providing respite and relief. A superb example is the dormitory at Echo Company barracks, which was designed to provide each recruit with a minimal sense of privacy by giving them their own corner in the room, as opposed to the traditional dormitory style of beds in a row. All components, such as shelving, are still standardized to Defence requirements but the layout provides a concession to personal recovery time.

Lieutenant Colonel H. A. Hanna of the Department of Defence, who is also project director for the Enhanced Land Force Infrastructure Asset Development initiative – the context for this new work at Kapooka – gave me some background to the purpose and scope of the initiative, and what it represents for Defence. In August 2006, the federal government at the time announced an initiative to enhance the land force with the addition of two infantry battalions. Kapooka became the home of the newly raised Echo Company and needed to expand its facilities to support this. Overall at Kapooka, the initiative consisted of twelve separate stages, including the construction of fourteen buildings and a considerable amount of supporting infrastructure and services, new roads and landscaping. There is also a new medical and dental facility, gymnasium, rifle range facility and obstacle course. All of this, and much upgrade work, was completed while Kapooka remained fully operational. The logistics are impressive but perhaps more interesting is Defence’s recognition of the need for facilities to be rebuilt to new standards of amenity, accommodation and finishes. While the rigours of training remain, young people need to be attracted to join the army.

All of this led me to observe a series of parallels between the fundamental robustness of the architecture and the hardships of the recruit training, and also between the grandness and monumentality of the roof as a “fly lid” on Echo Barracks and the pride with which new recruits wear their hats on their final day. There is also a parallel between the valuing of the army regalia and the way the bricks around the windows at the base of the barracks, which the recruits march past, are carefully corbelled to lift that small but important detail. Just as the culture is rich with ceremony, symbolism, protocol, tradition and frills – look at the uniform – the buildings speak to me about a culture of respect, making them a worthy setting for the journey. When recruits arrive at Kapooka the impression is daunting, but when they leave on march-out day there is a strong sense of pride in achievement and newfound personal strength. Everything about the work that has been completed at Kapooka, by the architects together with the consultants and Defence, supports a growing recognition that in these new buildings, the architecture is an important part of that journey.

Since this project, S2F has merged with global consulting firm Sinclair Knight Merz, and is now known as SKM-S2F. The mess hall features a sawtooth roof and is shaded on three sides by an oversized timber-clad verandah. 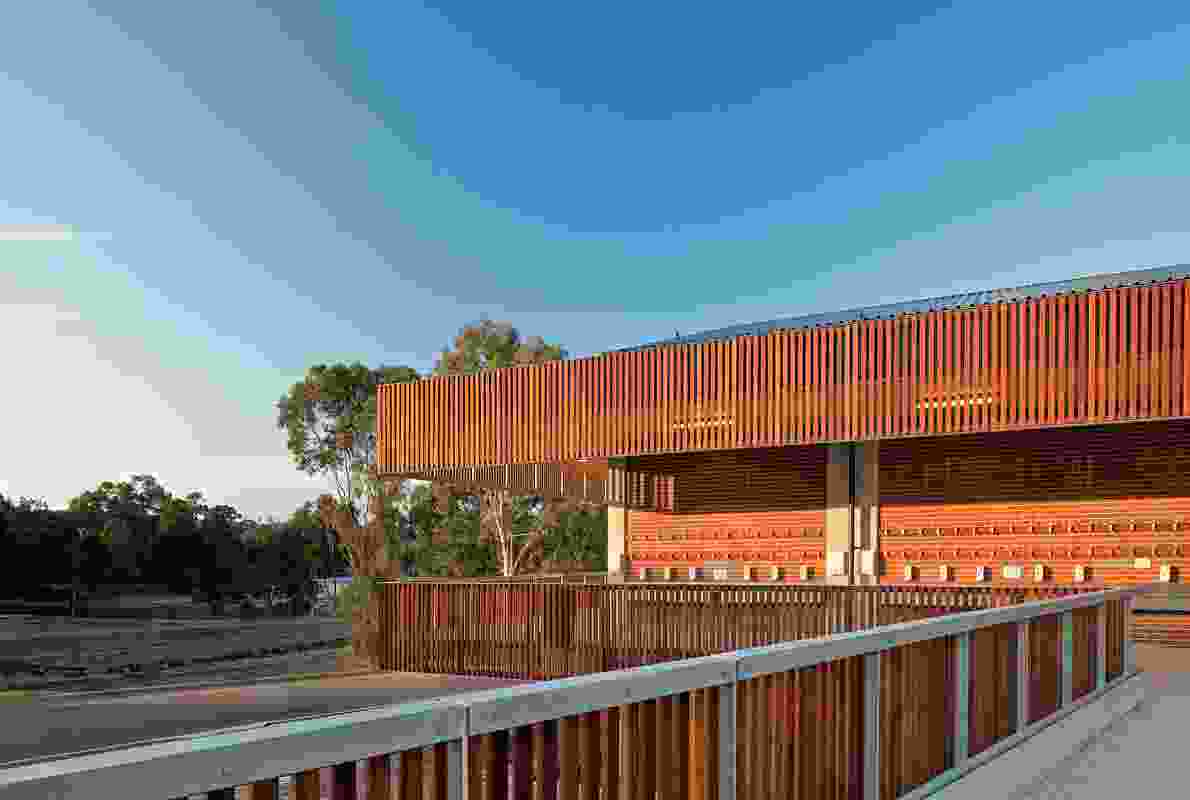 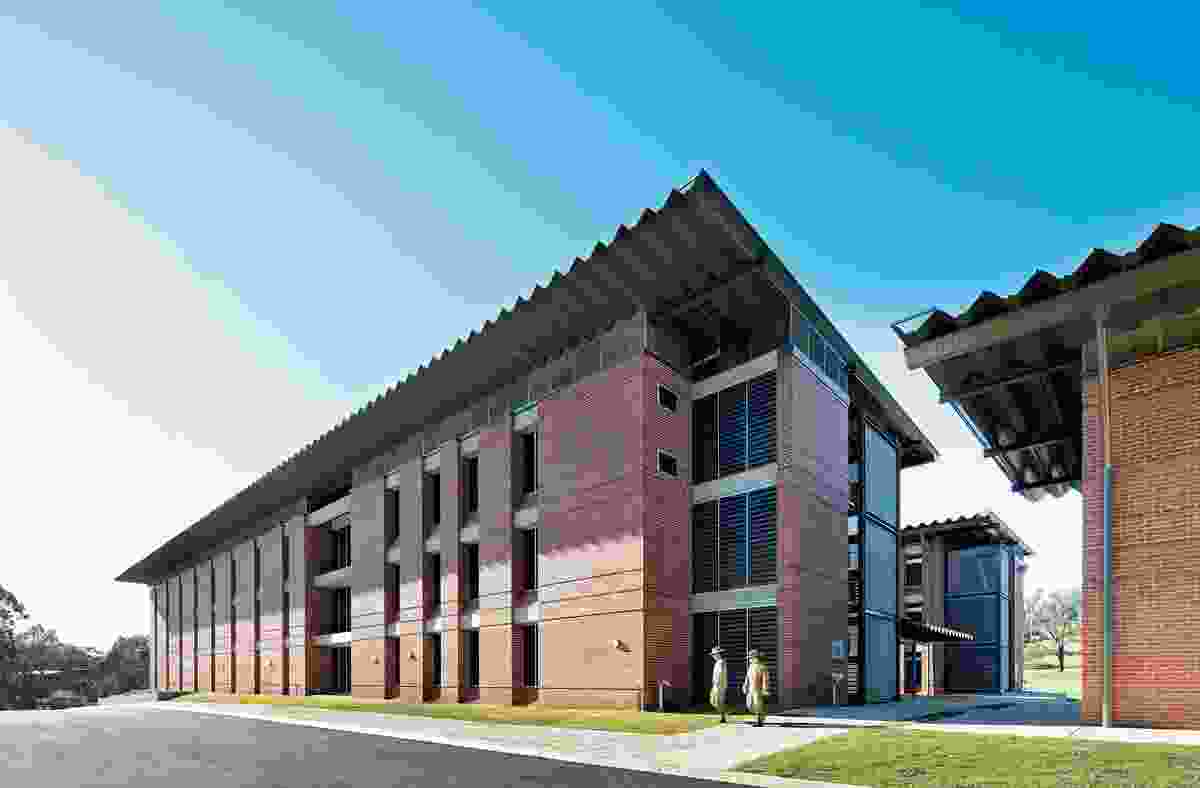 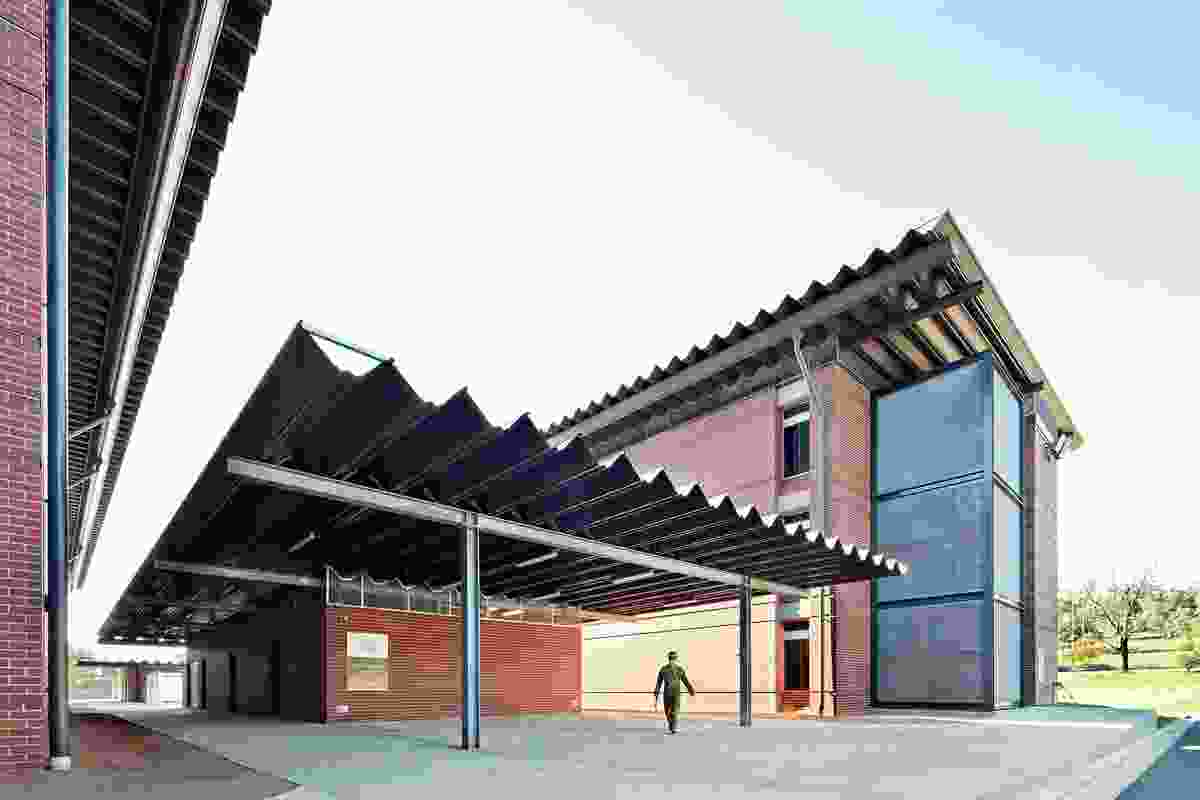 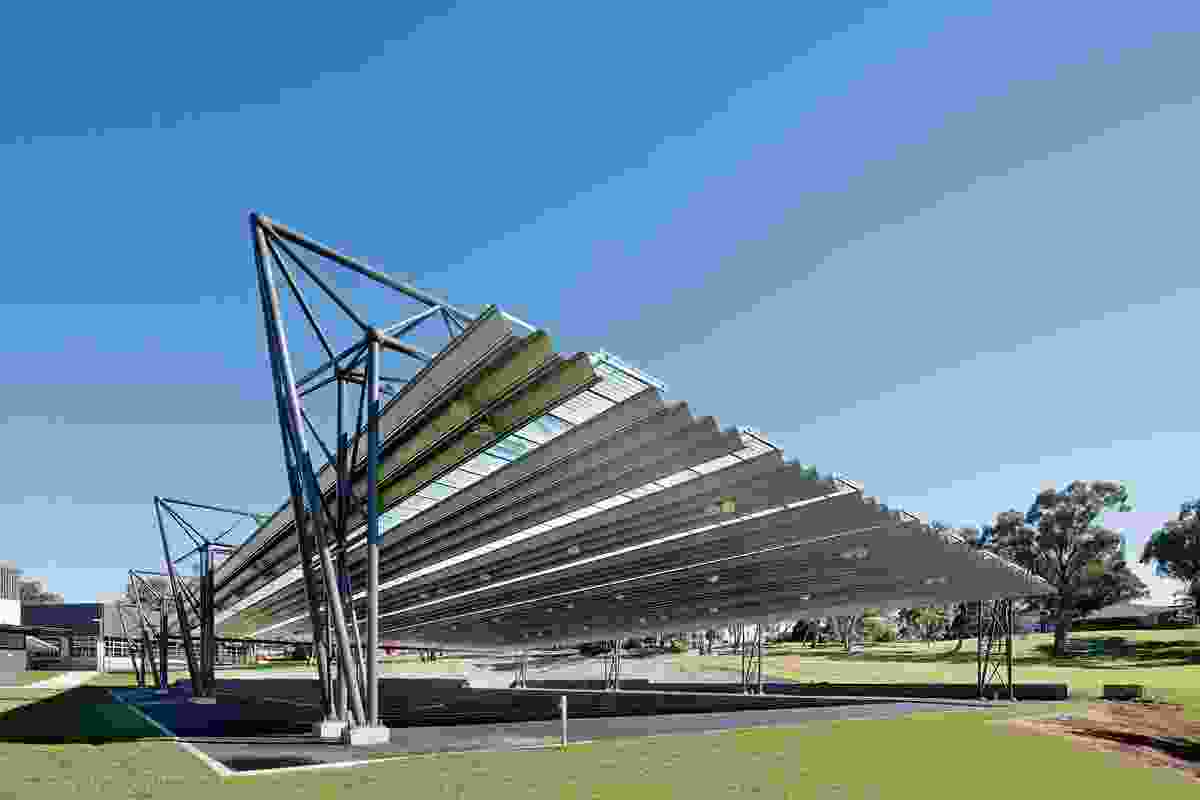 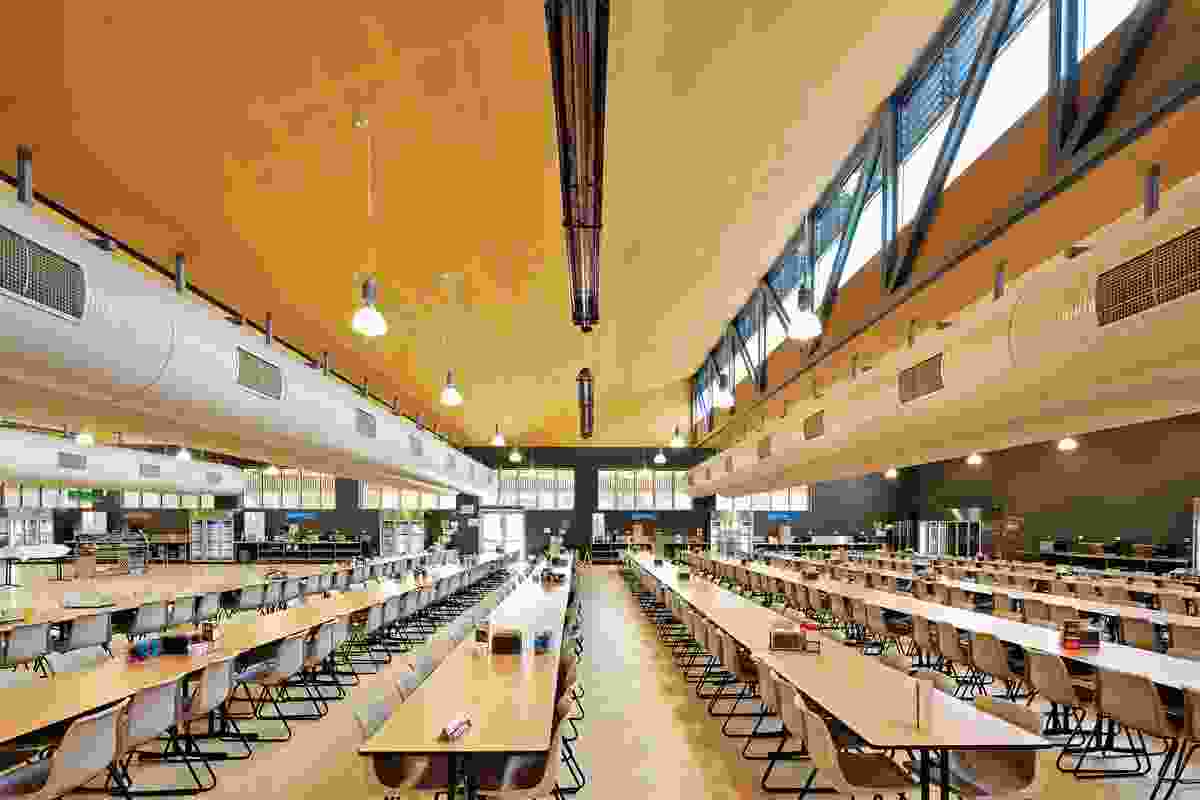 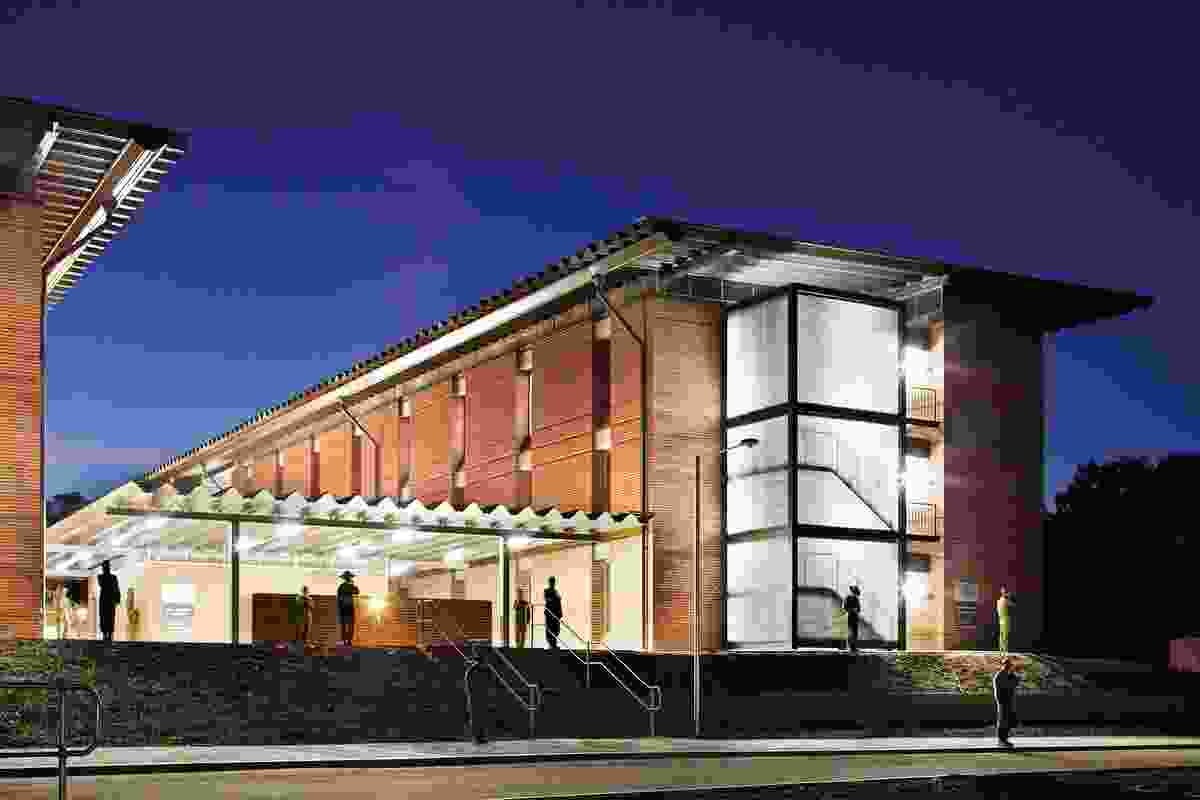 Framed by the robustness of the architecture, soldiers converse on their mobile phones.