Christopher de Campo's inventive brief of an art gallery and living spaces for character-filled clients has led to an accomplished ensemble of theatrical spaces.

The Mora complex is a diverse collection of gallery, home, studio and office mechanically combined on the fringe of an inner city industrial precinct. It fulfils the expectations of an art gallery while also directly communicating the roles inherent in its broader, mixed workings. A hybrid form of building - cross bred from the fields of commerce, industry, art, and domesticity - it examines this intersection in search of a new “comfort zone”. The building is intended to trigger an awareness in tune with its interactive character. This “multi-tasking” is explored in all its parts and program. It is typified at first level by the varying role of the pre-cast concrete skirt panels, which are understood as analogous to these combinations. Further explorations suggest and allow for permeability of pathway, flexibility of function, and a show of the seductive qualities of logic and allusion. The project offers a varied spatial environment in which to views all forms of contemporary art, combined with an experiential quality that musters intrigue, comfort and delight - Christopher de Campo.

Architect Chris de Campo’s brief for the design of the extended Mora family’s home and commercial gallery had the poetic ingredients of a Greenaway movie - intensely defined characters, the drama of an extended family and, best of all, that peculiar mix of the everyday with high art. Add to this a collection of antique dolls and prams, cats, children and the comings and goings of art buyers and curious strangers and the only thing missing is the undercurrent of malice that in Greenaway leads inexorably towards a tragic end. Here the conclusion, both in its architecture and its programmatic mix, is a romantically happy one. Under de Campo’s direction the varied scenes of the clients’ lives have found a rich and nuanced location. Like a film, this building has been conceived as interlocking parts, sequences of views and moments of intensity and anticipation.

The site has been literally invented. Known to the architect from a previous project, it is merely the airspace above an existing 16 car parking lot owned by others. Likewise, the program for the complex poised above was assembled out of the clients’ previously dispersed places of work and home, with the addition of two units to make the development viable. Access to the first level is along the northern edge of the site, wedged horizontally between footpath and cars and vertically between ground, terrace and sky. Reaching up in opposite directions the two stairs are set behind translucent glass walls without a canopy overhead, an effect that exaggerates their interstitial condition. The visitor arrives at either of two terraces behind a screen wall of tilt-up concrete panels. From below, the panels with their windowless openings have the ruinous appearance of Aldo Rossi’s empty punctuations, an effect exaggerated by the stain of a winter shower. From the terraces and the north-facing rooms above, the view opens out to a residential area of closely-knit cottages. Located on the perimeter of a commercial precinct of larger scale warehouses, the building has a mediating role that is embraced by its permeable north elevation. The terraces and rooms open onto the street, appearing to lend themselves to impromptu scenes of theatrical exchange.

But it is in the spatial relationships within the complex that the theatrical, almost stage-like, quality of the composition really comes to the fore. The first level houses the main gallery spaces to the east and Mirka Mora’s studio and residence to the west. Above the gallery, director William Mora’s family residence bends in a u-shape around a pool and terrace. Legible in the facade, this outdoor space allows the complexity of views back and forth, between levels and wings, to multiply. From most rooms in the residence it is possible to see visitors climb the stairs to the gallery and conversations are carried out from one balcony to another and across the terraces and stairs. The occupants swing from audience to player, stage to box seat, able to delight in each other’s presence. The residential units not occupied by the Moras are the only spaces excused from this improvised performance. Above the lift, which anchors the north-east corner to the ground, is a tiny balcony that provides sweeping views of the city - right around to Dimmey’s clock tower and back into and across the complex itself. 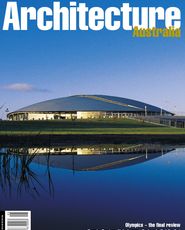