Awarded at the end of each year, the Artichoke Magazine Prize for design communication is presented to interior design/interior architecture students who demonstrate excellence in the visual and written presentation of an interior design proposition.

The Artichoke Magazine Prize for design communication is awarded to one graduating student from each of the institutions in Australia and New Zealand that offer interior design/interior architecture degree courses, and which are members of the Interior Design/Interior Architecture Educators Association (IDEA). Each institution’s prize-winning student is selected by its school head. This year’s winning projects demonstrate insight and innovation, and look at spaces such as cemeteries, gymnastics training centres and museums.

The discipline of interior design encompasses the idea of the public room held within ideologies of the civic sphere. Religious institutions are participants in this civic endeavour by providing places of gathering, recognition and exchange; in this way a physical presence is given to the Muslim community in Parramatta, Sydney. The design for Mosque for Parramatta exploits the geometry of the existing Georgian architecture of the old Kings School and neighbouring St Patrick’s Cathedral. The project enables interfaith dialogue and acts as an informal point of contact between the mosque and the church, akin to a shared backyard where neighbours gather to talk.

The subterranean is an interior that is often perceived to be formidable. However, when viewed through an alternative lens the environment is capable of inducing novel forms of habitation and spatial experience, while simultaneously enabling a projection of self-identity to be established by the inhabitants of the space. Reframing the Subterranean is a research project whose quantum of work comprises of three exploratory spatial propositions: that of the streetscape, transition threshold and subterranean occupation. These typologies were analysed in unison to establish the design for an alternative cultural milieu – enabling the cultivation of urban culture within the context of the Perth CBD. The various environmental qualities offered within the proposed design allow for highly adaptive and dynamic spaces to be constructed, and a connection to the world above to be maintained.

Kaia is a pavilion for personal rejuvenation through the observation of, and simple interaction with, water. Kaia promises to offer visitors a holistic exploration of the psychological, physical and spiritual benefits of water. Ellen Ferrier sought to devise a pathway through space that would mirror water’s cyclical nature. Aesthetically, visitors are immersed in the elemental and geometric symbology of water – they are guided over reflective water beds and past waterfalls, and encouraged to interact with water in various ways.

Light in the Realm of Darkness is an architectural performance that captures reinterpretation and critical appropriation of contemporary underground spaces within New York City, with particular examination of the connective/communicative space between the living and dead. The re-establishment of a lost site will transform a void space into sacred repository for the dead and a communal urban precinct for remembrance.

In Classical Greek mythology, the death of Eurydice led Orpheus to descend into the underworld in the hope of her return. This project, Orpheus’ Odyssey: Inhabiting the Threshold between the City and the Cemetery, investigates the potential of a third space that lies between the Melbourne General Cemetery and the immediate inner-urban context that surrounds it. This project inhabits an edge that is thickened and then populated by a series of scenarios that augment the existing urban condition and bear witness to the shared formalities of the cemetery. One foot either side, this project realizes Orpheus’s first step, straddling the city of the living and Melbourne’s necropolis.

This project, Lightness, seeks to develop an existing car park structure in Wellington, New Zealand into a platform for community activity. The plan is to insert a gymnastics-training centre in the Willis Street car park, employing the concept of “lightness” to guide the design. The project rethinks how gymnasts and vehicles engage with each other by reframing them as everyday spectacles and dividing the space into a series of platforms stratified at different heights, creating the impression that events are “levitating” at varying planes. Polycarbonate sheeting disperses the figures of both the gymnasts and vehicles, enabling visual engagement between the two.

Living In Between is part of a wider investigation of sustainable and diverse approaches to multi-unit development in suburban Auckland, New Zealand. The project deals with the way we live and work and explores how intensification may increase quality of life and richness of dwelling. Bordering an industrial area, the dwelling questions the separation of home and work, proposing an in-between realm for a craftsperson or carpenter. It is conceived of as a dwelling box constructed within an encompassing workspace, the former finely crafted, the latter staging continual transformation and making. Linked to an adjacent common area given over to plantation tree species grown for intermittent milling, the dwelling participates in a sustaining circuit that is at once public and industrious.

The Darling Hotel brings luxury to Adelaide’s Franklin Street through a studio project in which the driving inspiration has been abstracted from the sport of sled-dog racing. A sophisticated negotiation of private and public realms achieves an elegant juxtaposition, describing the unique and temporal landscape of the dog sled. Refined, sculptural forms proffer a timeless atmospheric condition to this hotel rooftop, respectfully complementing the existing heritage architecture. Through explorative design an emotive resolution is found in material exchange.

The Skill Society project celebrates both traditional and emerging artisan skill sets. Through atmospheric and interactive experiences it enables the community to gain an appreciation for quality craftsmanship. Expanding on its context within an existing performing arts precinct, the artisan processes of goldsmiths, artist blacksmiths, 3-D metal technicians and brass musical instrument makers are put on show. An elevated golden metal-mesh insertion containing a public retail/gallery space and craft liquor bar forms a dynamic sculptural feature within the heritage building. Views down into the craft workshops below reveal a theatrical journey, as raw metal is transformed into items of function and beauty through the application of human skill.

Intriguing Interrelationships: Towards a New Gallery considers the process of designing for future museum and gallery display. It challenges the NGV Contemporary gallery as a site for spatial experimentation. By introducing reflective surfaces and framing structures into the gallery and the showcases, the exhibition display becomes a viewing apparatus for experiencing the artwork and the space simultaneously. Within the work there is a desire to create an active viewer, one who is empowered through the experience of physical participation. The work engages with surfaces within the gallery space, allowing the viewer’s image within the space to collapse and for a fleeting moment become displayed as one with the artwork.

This project explores a negotiation between the traditional hierarchy of architectural intentions and the algorithmic notation of the form production. It explicitly engages the world with its structural form as the main instrument. Primarily digitally enacted, it is a revolutionary alternative to the extreme crystalline regularity of architecture. The form-finding methodologies extend the possibilities of formational processes beyond the limitation of material substrates, embracing the beauty of the raw form while promoting a diversity of emotion within an interior context. 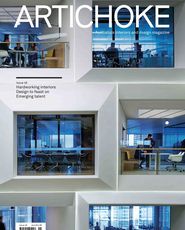 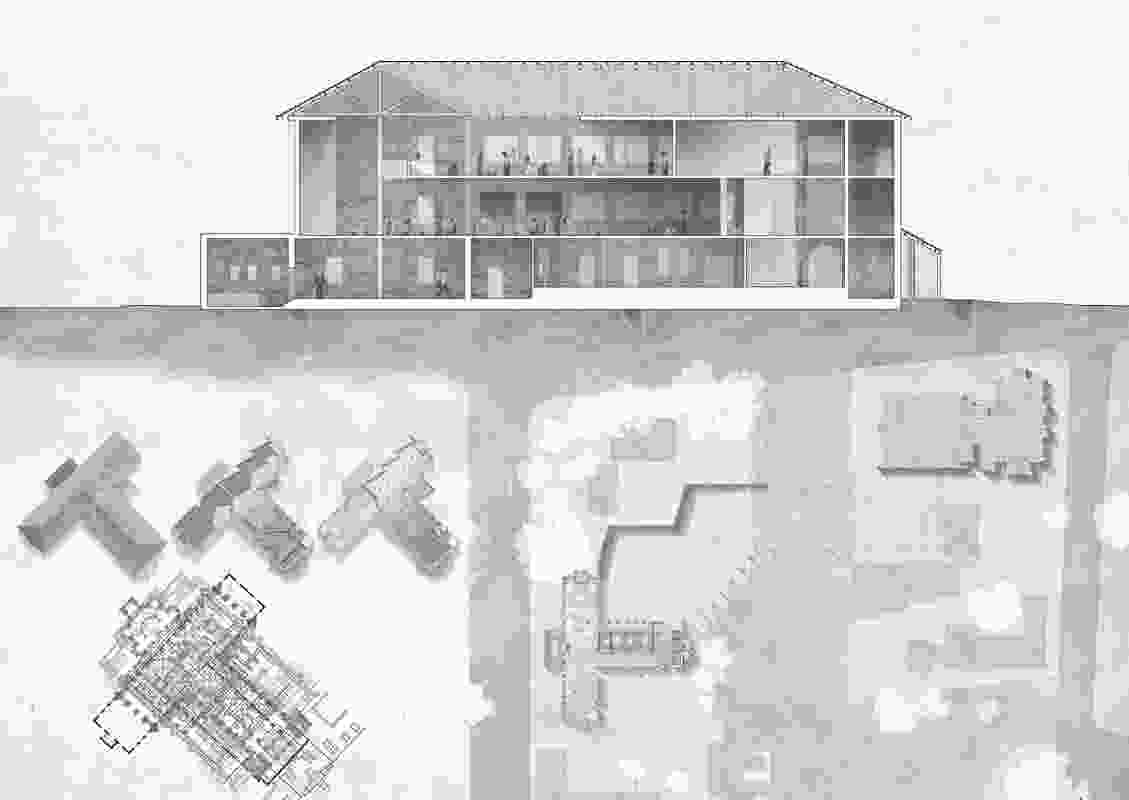 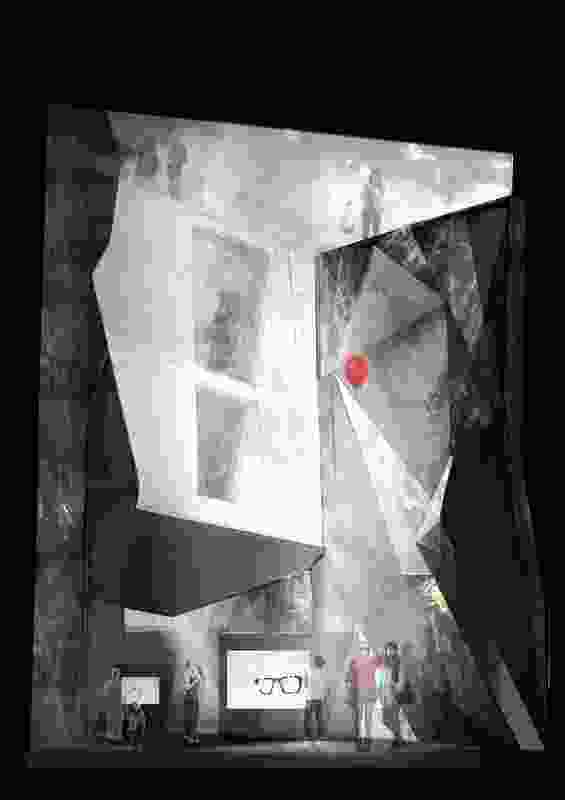 Submission from Ellen Ferrier, the University of New South Wales. 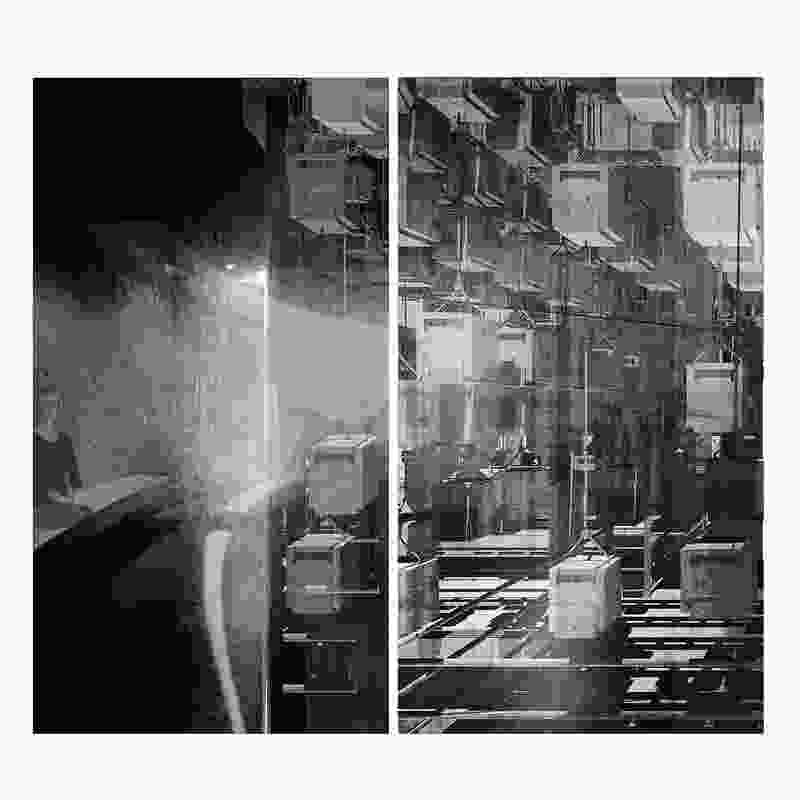 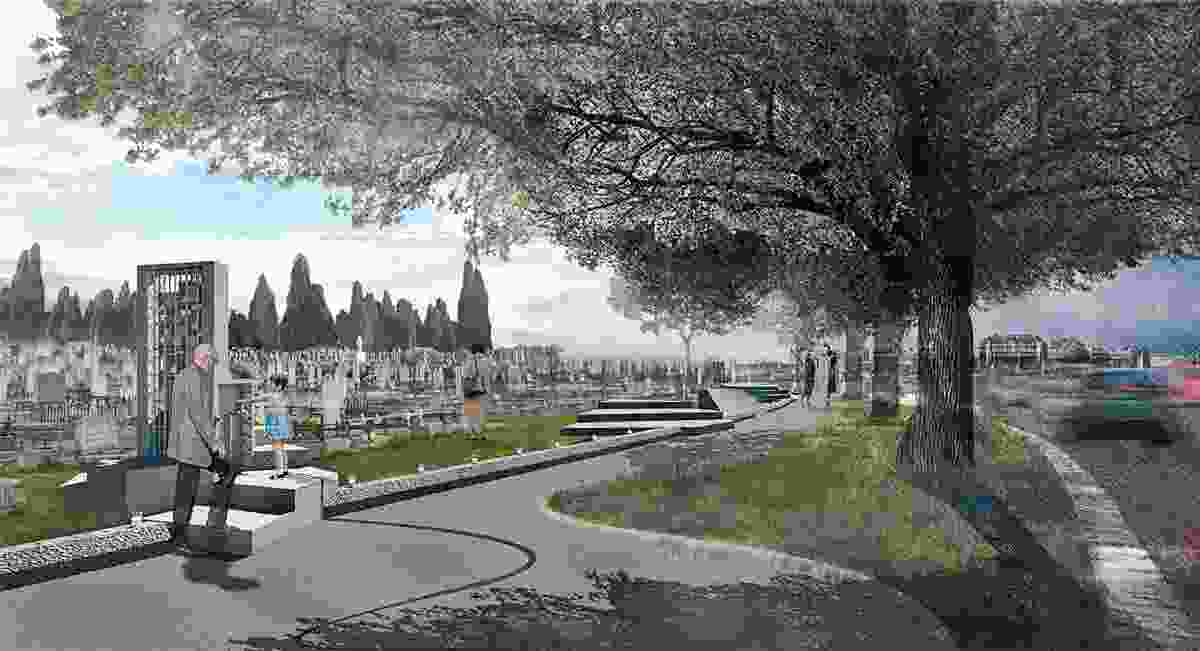 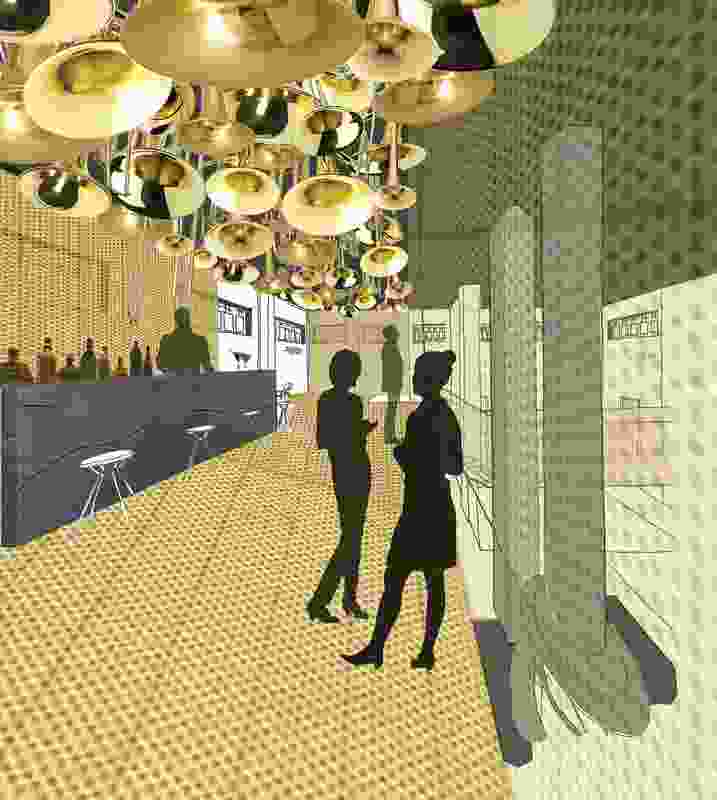 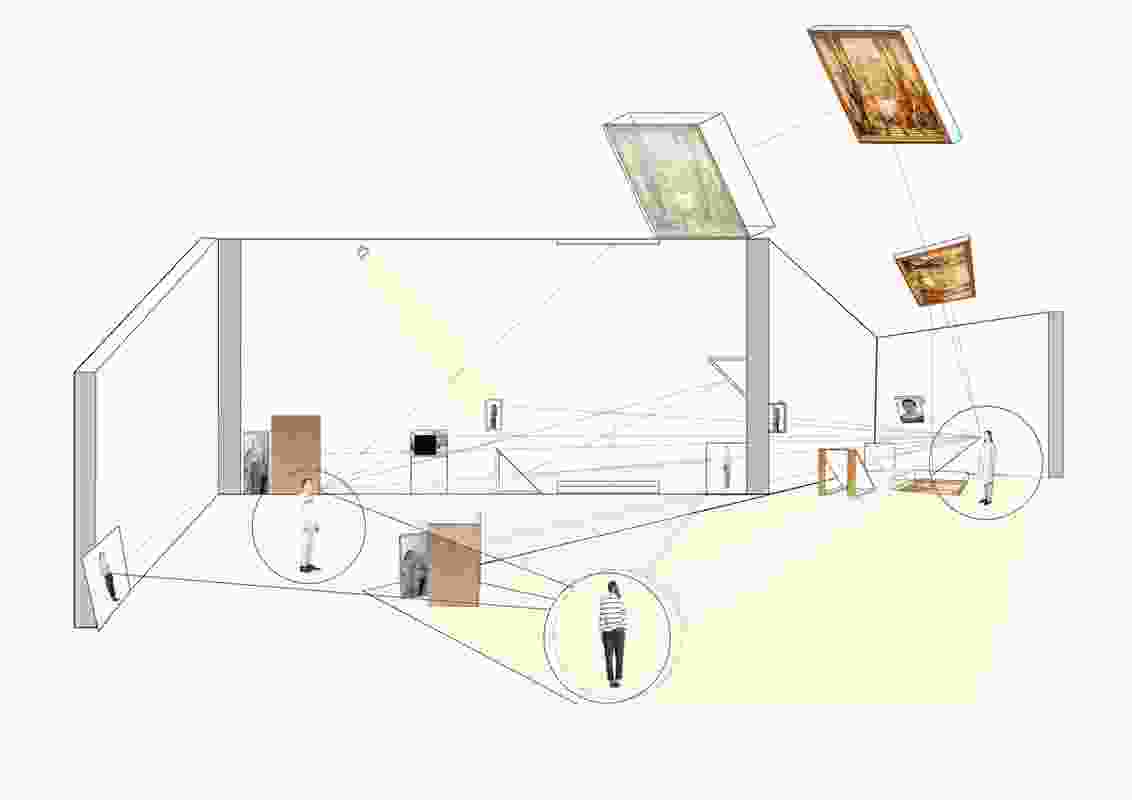