A house by Alexander Symes Architect in association with G+V Architecture “almost leaps into the view,” on its beachfront block on the NSW South Coast.

Architect Alexander Symes is standing in a privileged position. From the construction site of his current project he is looking across the water to his recently completed Austinmer Beach House. These two projects bookend the beach at Austinmer and bring a new level of environmentally sensitive architecture to the area.

It’s easy to be seduced by the prospect of a sea change when visiting this coastal hamlet just south of Sydney’s Royal National Park. The clients, having returned to Sydney after stints in Amsterdam and London, sidestepped the metropolitan area to take advantage of everything this coastal hamlet can offer a couple starting a family. After purchasing a prime beachfront block topped with a classic fibro shack, they decided to create a family home that would maximize the aspect onto the water and headland while providing privacy. Environmental concerns were not initially at the forefront of the couple’s minds. However, the pairing of Alexander Symes and local master builder Matt Jolley meant their respective abilities with sustainable methodologies were unified, and they have used them to create an efficient, low-ecological-impact home that more than meets the clients’ lifestyle needs.

Austinmer Beach House stands tall above the adjacent tiled roofs. According to Alexander, the main aim of the design response was “framing and accentuating the opportunity.” Taking the form of an elongated timber box perched on concrete columns, Austinmer Beach House breaks from rigid symmetry through an attenuated curve that almost leaps into the view. The dwelling is programmed into three distinct elements: the open-plan communal space comprising kitchen and living areas that spill onto a north-facing terrace and lap pool, the floating box that houses bedrooms and bathrooms, and the subterranean loggia that offers a secondary entertaining space complete with wine cellar and courtyard. Each element has a different thermal mass, insulation and shading strategy.

“I spent a year of weekends drawing the Opera House and realized that the continuity and rhythm of the podium is what makes the sails float and dance … The same strategy is used in this house.”

If there is something of a Scandinavian feel to the project, it could be because Alexander spent time studying in northern climes. In fact, he cites both Jørn Utzon and Sigurd Lewerentz as design influences. “I spent a year of weekends drawing the Opera House and realized that the continuity and rhythm of the podium is what makes the sails float and dance … The same strategy is used in this house,” he explains.

Extensive site works created a level platform under which a three-car garage and loggia could be accommodated. Demolishing the cottage necessitated the careful removal of asbestos; remaining materials were sorted into recyclables and non-recyclables. All timbers were reused and suitable brick, stone and concrete were milled and returned to the site to replace aggregate for retaining walls. The rest of the material palette comprises low-OPC concrete, PEFC-certified blackbutt timber for both framing and cladding, recycled brick and reclaimed railway sleepers. Reducing the selection to fewer exposed materials put extra emphasis on craftsmanship.

Elevating the ground plane has meant every space in the new build celebrates either the seascape to the north-east, or the mountains to the west. These extended vistas help enhance the house’s sense of calm, as does a six-metre-high void above the dining table. In the main living area, the thermal mass of concrete and double brick absorbs the winter sun during the day, while the floating box shades the living areas from summer radiation. Temperature sensors concealed in the bulkhead activate eco-powered exhaust vents; essentially, the space acts as a giant lung that automatically breathes out hot air and draws through cooler air. All glazed walls can be opened fully to maximize cross-ventilation. Insulation ensures a stable thermal envelope, and is augmented by underfloor hydronic heating. Upstairs, windows are recessed deeply. Here, Alexander has eschewed traditional top awnings and implemented westerly shade screens that focus attention on the views while ensuring privacy from the street.

In many ways, the house is designed as a landscape, with the materials progressing from inside to outside and vice versa.

In many ways, the house is designed as a landscape, with the materials progressing from inside to outside and vice versa. Alexander has anchored the entry to the south of the site with a 2.4-metre-wide double wall of recycled bricks that provides a continuous landscape element and which houses the kitchen, laundry, powder room and bar keep under the stairwell. Those familiar with Lewerentz’ Klippan church might recognize signature patterns and methods of bricklaying that express the qualities of the brick. Alexander’s preference for dematerialized surfaces honours the Swedish architect and supports efforts to reduce the amount of materials and finishes used.

“I don’t see a need for additional finishes like plasterboard when exposed timber, brick and concrete have such a robust beauty. I’m more interested in how you can make something exciting in order to reduce its environmental impact,” says Alexander, pointing out the way exposed cables are artfully arranged on the ceilings and the way peekaboo holes in the stairwell and drying room add playful interest and break up the mass.

The planting in the garden duplicates the flora of the local area. This landscaping is both symbolic and functional, as the plant species are located in their preferred environments in terms of sunlight, soil depth and wind exposure. Already, the native mix of flora is helping to re-establish the biodiversity of the area – a water dragon has taken up residence in the saltwater pool and adjoining scrub.

When asked how he likes to describe this project, Alexander refers to the residence as “just a beach house.” It’s a modest response given that the home has been honoured with multiple awards. Ultimately, the home sets a welcome eco-responsive benchmark for the area, especially in terms of the consideration given to designing the form for optimal coastal living, minimizing environmental impacts and improving energy efficiency.

Lighting
Bocci custom LED lamps; all other lighting by LightCo. 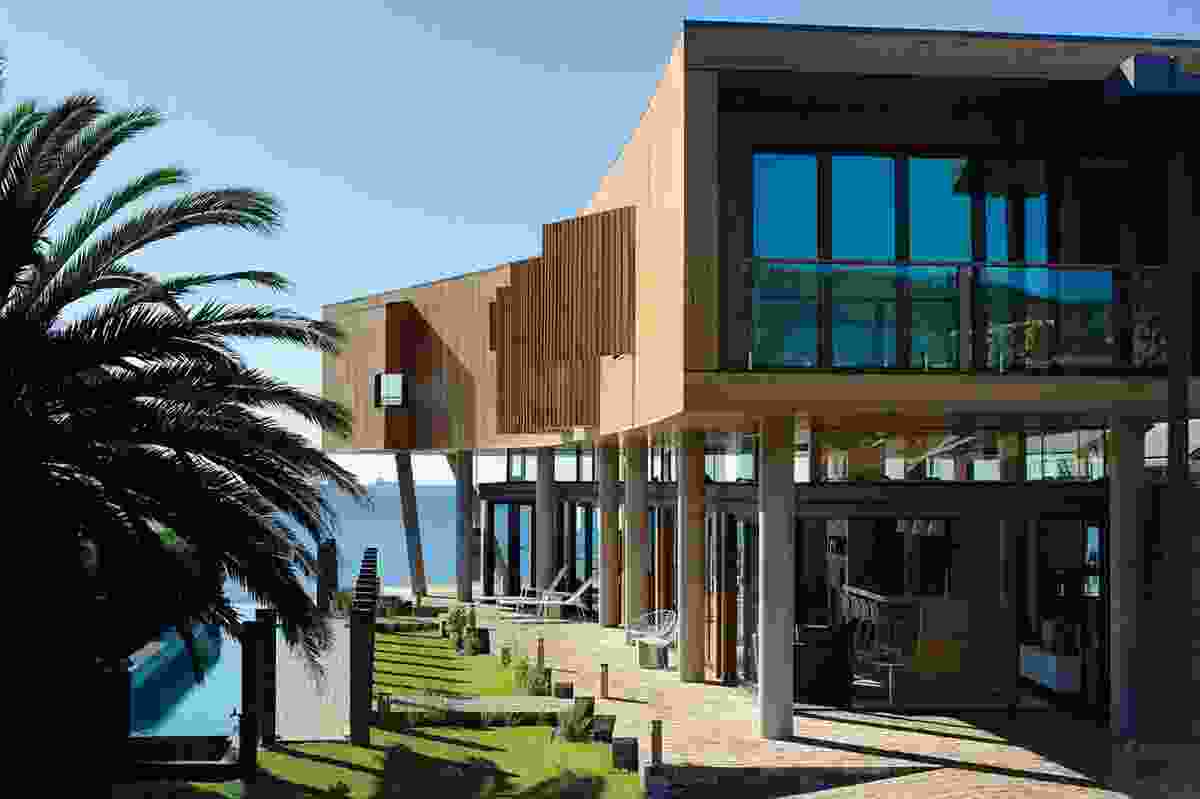 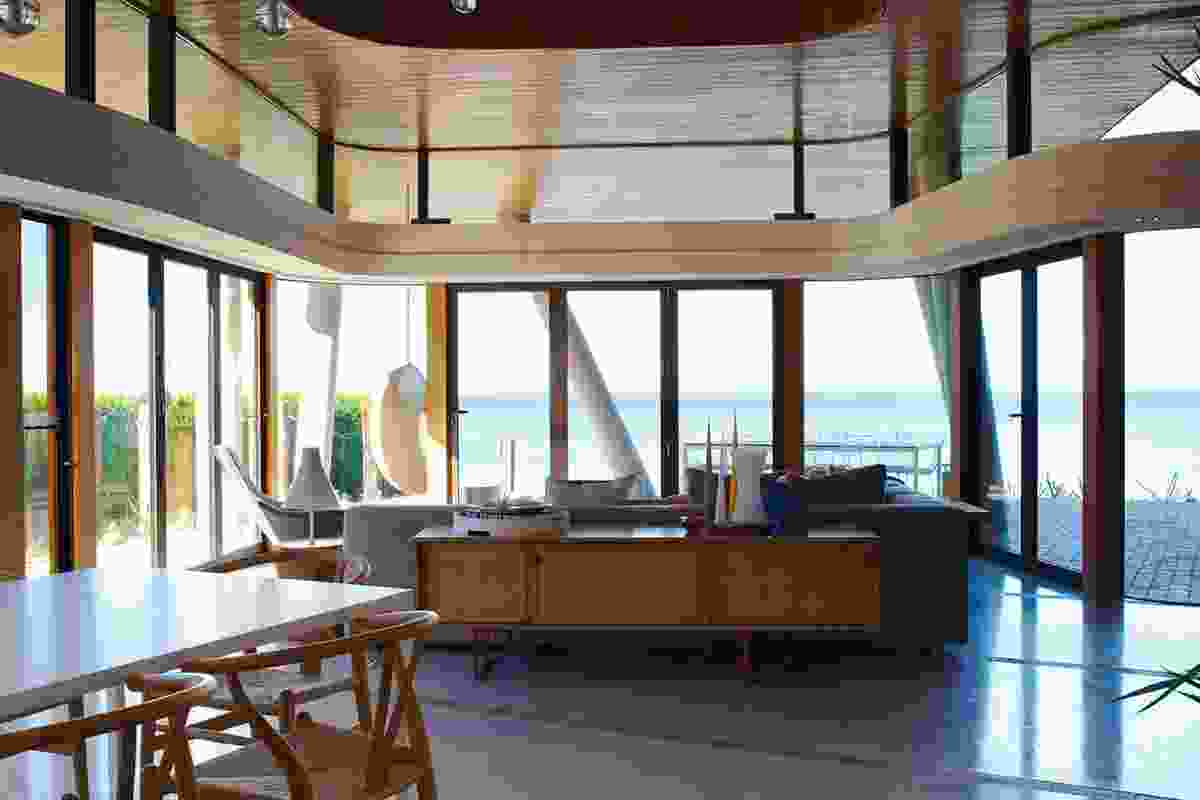 The open-plan living space with a void above the dining table. 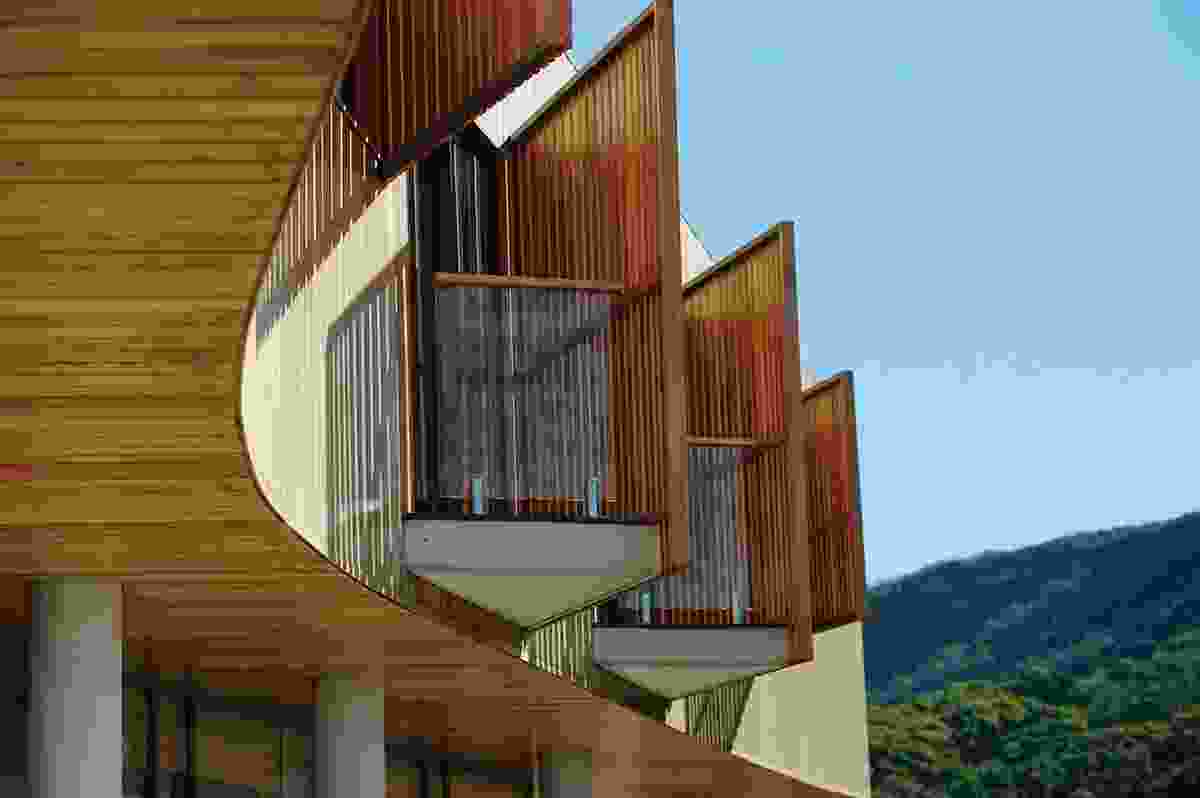 Shade screens on focus attention on the views while ensuring privacy. 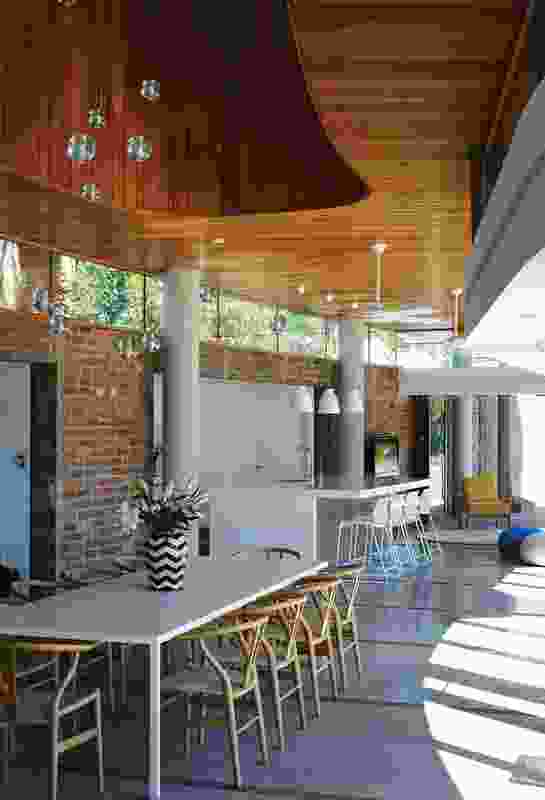 Views are celebrated through the elevation of the ground plane. 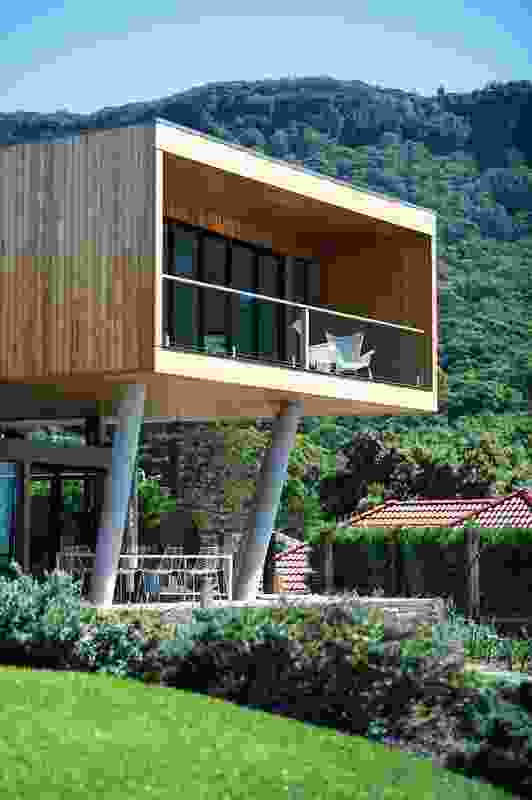 The house stands tall above the adjacent tiled roofs. 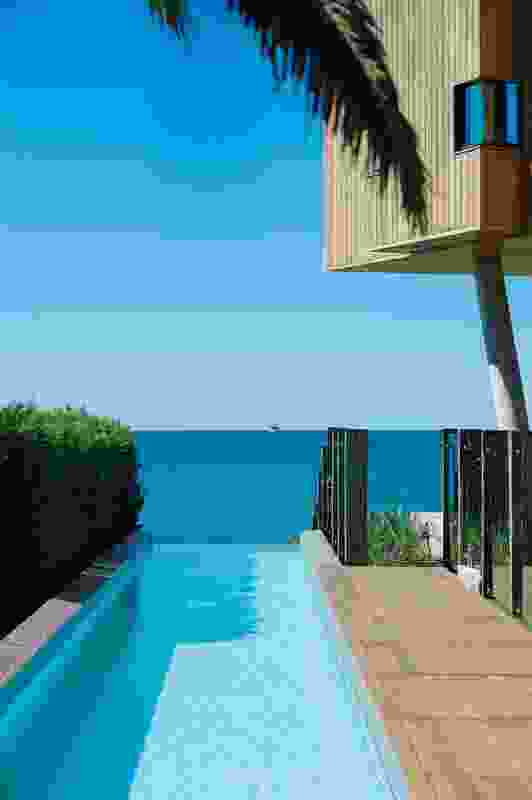 The terrace and lap pool reach out to the ocean. 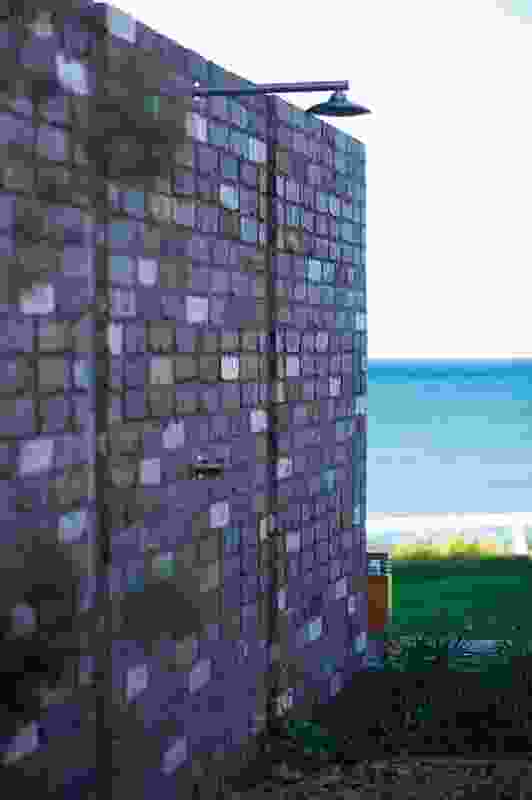 The use of brick in the project extends into the landscaping.