Facing the problem of overheating in Australian cities

The many causes of temperature increase in cities result in just as many problems. Mitigation techniques are available but are not enough to counterbalance the impacts. We must implement adaptation techniques, including facade protection and efficient ventilation, to ensure the health and comfort of urban populations into the future.

The overheating of cities – better known as the urban heat island phenomenon – is the most documented urban impact of climate change. There are more than four hundred cities around the world where the characteristics and magnitude of temperature increases are being experimentally documented. The average magnitude of urban overheating can be as high as five to six degrees Celsius, while in some Asian cities it has been found to exceed ten degrees.

Increases in the ambient urban temperature are caused by the positive thermal balance of cities. Cities suffer from the release of anthropogenic heat by cars, buildings and industry, as well as the absorption of solar radiation and the emission of heat by opaque surfaces such as asphalt and concrete. A lack of greenery, decreased evaporative heat losses and reduced wind penetration can also contribute to rising temperatures in urban areas. Another cause is the high concentration of pollutants that block the emitted infrared terrestrial radiation.

When it comes to life in our cities, urban overheating causes several serious problems. It considerably increases the energy our buildings consume to keep cool, raises peak electricity demand during warmer periods, increases the concentration of harmful pollutants, reduces thermal comfort and, perhaps most frighteningly of all, significantly increases heat-related mortality and morbidity.

To counterbalance this, several mitigation techniques are available. One common technique is the use of reflective materials for buildings and urban fabric that can reflect some incident solar radiation back to space. Cities can also use intensive greenery such as building-integrated vegetation, along with evaporative technologies, solar control systems and dissipation techniques that direct excess heat into a low-temperature heat sink like the ground or the sky. Large-scale applications of these ideas in cities have shown that it is possible to decrease peak temperature by up to 2.5 degrees Celsius. Next-generation mitigation technologies may contribute an even greater reduction of up to four degrees Celsius.

The overheating of Australian cities

Numerous studies have documented dramatic temperature increases in Australian cities. This is due to continuous urbanization, industrialization, increasing size and population, and the shift in land use from agricultural green spaces to urban zones that absorb solar radiation and hence heat up. As such, the thermal balance of Australian cities has become more positive and temperatures are rising. In addition, global climate change is contributing to increased heatwaves, which are both more frequent and of longer duration in almost all Australian cities.

Figure 1 shows the temporal increase in Sydney’s ambient temperatures in January and March over the last forty-five years.1 The temperatures were recorded at Observatory Hill in the eastern part of the city. The graph shows a continuous trend of increasing ambient temperatures, suggesting higher needs for cooling.

However, the problem of overheating becomes more serious when we move further from coastal areas. Almost all major cities in Australia are developed next to the sea and benefit from the cooling characteristics of sea breeze. However, further inland, temperatures are much higher, mainly due to the impact of the Australian desert. For example, during the summer period, Sydney’s western suburbs can be more than nine degrees Celsius warmer than the eastern suburbs. 2,3 This trend is clear in Figure 2, which shows the number of cooling degree days (used to quantify the demand for energy required to cool buildings) for the Sydney area across 2015 and 2016.

Urban overheating is dramatically increasing the energy consumed to keep our cities cool. Figure 3 shows the distribution of the cooling load of a reference office building in Sydney4 – in particular, it shows that because of serious overheating, the cooling demand in north-western Sydney is almost double that in the coastal zone of the city, a mere fifty kilometres away. Furthermore, several studies have documented the serious impact of overheating on mortality and morbidity as well as the very significant increase in peak electricity demand. For example, it’s been found that a two-degree Celsius increase in daily maximum temperatures in Parramatta, in western Sydney, raises average mortality anomalies by 5.3 percent and average morbidity anomalies by 6.4 percent.5

The proper mitigation of urban overheating should look to reduce the sources of excess heat and enhance heat sinks.

Researchers have studied the cooling potential of several mitigation technologies for Australian cities. They estimate that combining reflective materials on roofs and pavements with extensive use of greenery and evaporative technologies could reduce the peak average temperature of cities by between 2.5 and 3 degrees Celsius. Figure 4 shows how ambient temperatures in western Sydney could decrease when several mitigation techniques are implemented.6 It also shows the likely temperature increase by 2050, fuelled by land-use change and global warming.

In addition, the implementation of these combined mitigation techniques would decrease the cooling load of residential and office buildings between 25 and 32 percent respectively. This would lead, in turn, to an important reduction in heat-related mortality and morbidity.

Urban overheating is a serious problem for Australian cities and one that will grow in the future. My research has found that the implementation of existing mitigation technologies can reduce the peak temperature of cities by up to 2.5 degrees Celsius and reduce additional energy demands, while also limiting the impact overheating has on health.

However, the magnitude of climate change expected in some Australian cities suggests that applying these mitigation techniques alone will not counterbalance the expected impact of heat on energy consumption and comfort. To protect our population from expected temperature increases, cities must implement adaptation techniques such as advanced facade protection and minimization of heat flow, as well as efficient ventilation, low-energy lighting and high-performance airconditioning, in combination with mitigation technologies.

— Mattheos Santamouris is a Scientia Professor of High Performance Architecture at the University of New South Wales and past professor at the University of Athens, Greece. He has been involved in designing and implementing mitigation technologies in more than sixty cities, and energy conservation and renewable technologies in hundreds of buildings and settlements of zero-energy consumption. His current research supports the creation of sustainable, livable cities in Australia.

Facing the problem of overheating in Australian cities 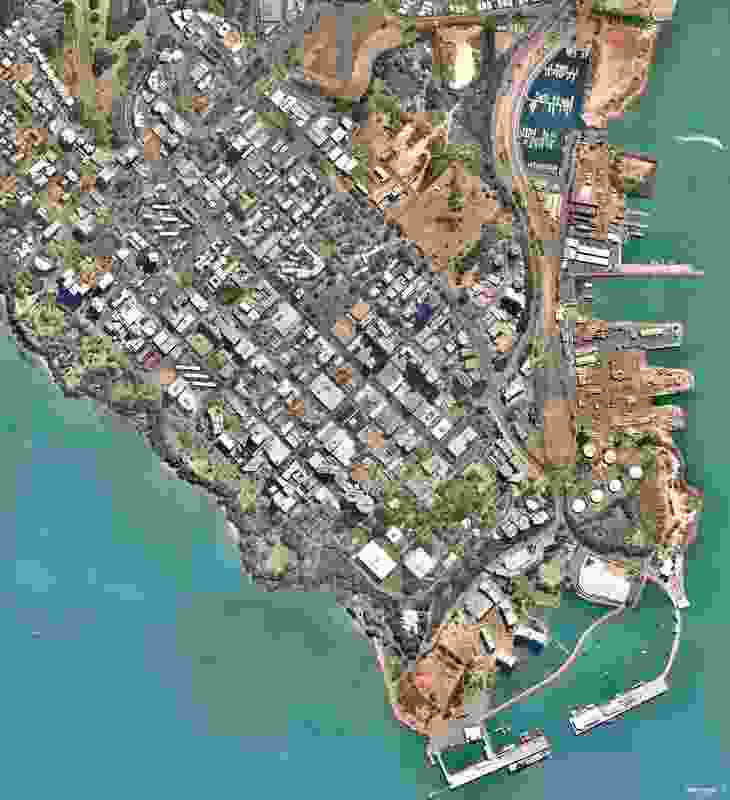 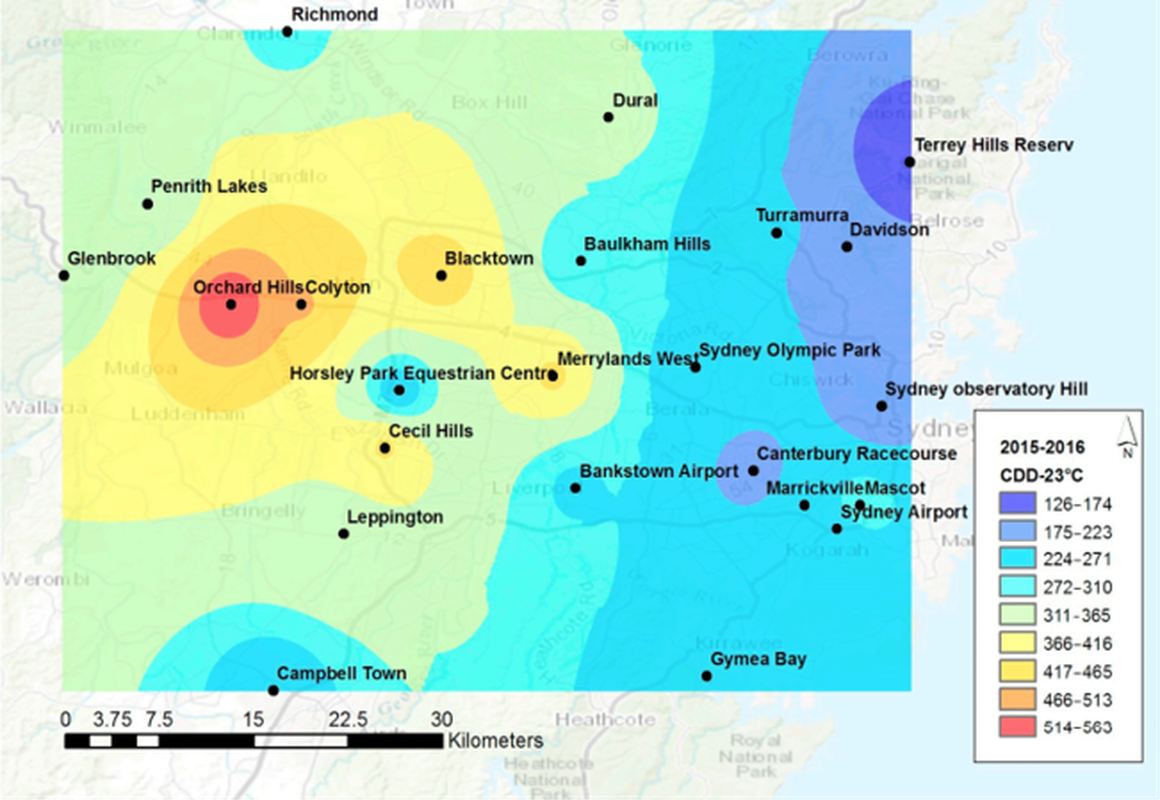 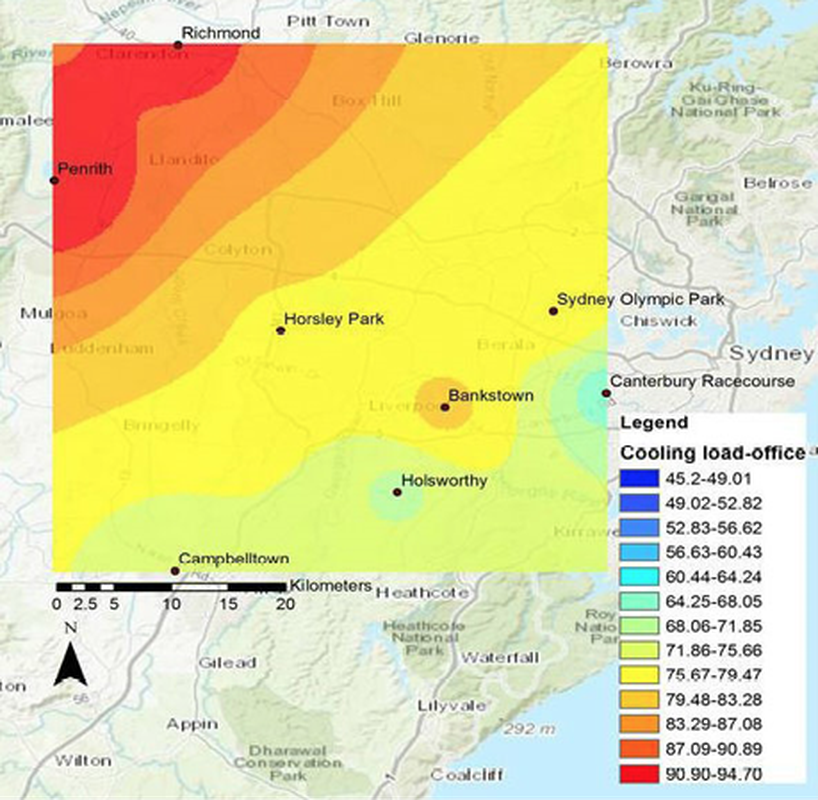 Figure 3: The distribution of the cooling load of an office building in Sydney. Figure 4: Ambient temperatures in western Sydney could decrease with the implementation of several mitigation techniques.