Weaving elements of the old building fabric in with the new, in some places overtly and in others organically, gives Balmain Semi by CO-AP and Nick Bell Architects a feeling of harmony.

A new staircase in a central atrium marks the transition from old to new in a robust palette of concrete, recycled timber, steel and glass. Artwork: Maricou, Silver Mare.

Balmain Semi expresses beautiful links between the house’s Federation heritage and its future as a contemporary family home. From the street it presents politely enough, with a newly planted cottage garden, brickwork restored and timber fretwork revived with a coat of china blue paint. Not much more appears altered, but inside is a revelation.

The light-filled extension by CO-AP and Nick Bell Architects has added three upstairs bedrooms and bathrooms, a downstairs kitchen and a dining area that opens to a private garden by landscaper Michael Bates. It’s very much a collaboration between the architects and owner/builder Mathew Wilk of Ballast Point (his construction and project management company).

At the start of the project, M athew presented CO-AP with council-approved plans by Nick Bell Architects with the option of making changes, but few were needed. The plans by Nick Bell Architects had pushed the council controls to their limit, particularly the requirement that any first-floor additions remain unseen from the street. To do this and deliver the three upstairs bedrooms called for in the brief, Nick’s practice realigned the roof with a transverse gable, bringing the first-floor mass closer to the street, while concealing it behind the roofline.

CO-AP’s planning interventions were minor, says CO-AP director Will Fung. “At the detailed design/documentation stage, we just rearranged some room layouts – the wet areas in particular, and the kitchen and study – and tweaked some side window locations for privacy.” CO-AP’s big influence can be seen in the details and materials selection.

The building is not heritage-listed, but is part of a Heritage Conservation Area in a small street behind Balmain’s shopping village in Sydney’s inner west. Respecting local council controls for facades to be preserved and front rooms unaltered, CO-AP stepped lightly at the front, stripping clean original brickwork, repairing damaged porch tiles and marble nosing, and inside, restoring fireplaces and kauri pine floorboards from the entry through to the living room, where a tectonic shift occurs.

A sculptural new staircase in a central atrium marks the transition from old to new, in a robust material language of concrete, recycled timber, steel and glass. The atrium has a double-height glass wall to the north-east, channelling sunlight into the centre of the house, filtered through a veil of bamboo planted behind the glass. Fine steel rods encase the split-landing stairs, amplifying the vertical experience of this void.

These plays of light and materiality are quintessential CO-AP. In 2016, the practice won state and national architecture awards for a Darlinghurst rooftop apartment, which blends original building fabric with a modern addition that turns its interior focus outward to a sky garden. The practice has achieved something similar here, balancing mass and void and playing with thresholds to expand space and connect you to life outside. Some of these details include the kitchen window into the atrium, a bay window upstairs capturing city views for the main bedroom, and the upward tilt of the new concrete ceiling that amplifies the opening into the garden.

It’s also the weaving of the old building fabric into the new that makes the interior harmonious. Sometimes it’s overt, as with old structural timbers from the house recycled into stair treads and chunky display shelves. Sometimes it’s more organic – for instance, the terracotta bathroom floors that echo the front porch’s Indian red tessellated tiling.

Mathew wanted to use off-form concrete in a significant way, so CO-AP expressed the rear addition in off-form concrete and softened it with warmer materials such as terracotta, timber and stone. In the kitchen, different stones and timbers are used on inset joinery and the central island bench. This isn’t a large space by any means, but the island makes it brilliantly functional, and the subtle material shifts replace uniformity with a more interesting tailored look and feel.

Behind the scenes, Balmain Semi works hard to be sustainable: photovoltaics on the roof feed into a battery that stores household power, and the atrium window brings cross-ventilation into the centre. Materials from the existing house have been re-used, including structural beams refashioned into thick timber stairs and shelves, and bricks from demolished walls cleaned and re-used as paving in the garden. A lot of thought has gone into the detailing of this house, the first independent development for Ballast Point. Not only have the designers and builder met the brief, they’ve also created some artful elements, and prioritized the landscape and a sheltering garden where others might have opted for a garage. When all parties are engaged wholeheartedly in the process and collaboration leads to design moves that go beyond the expected, the result is as rewarding as this.

Other
Plywood joinery in study with EchoPanel wall lining by Woven Image; repurposed timber beams made into shelving and stair treads 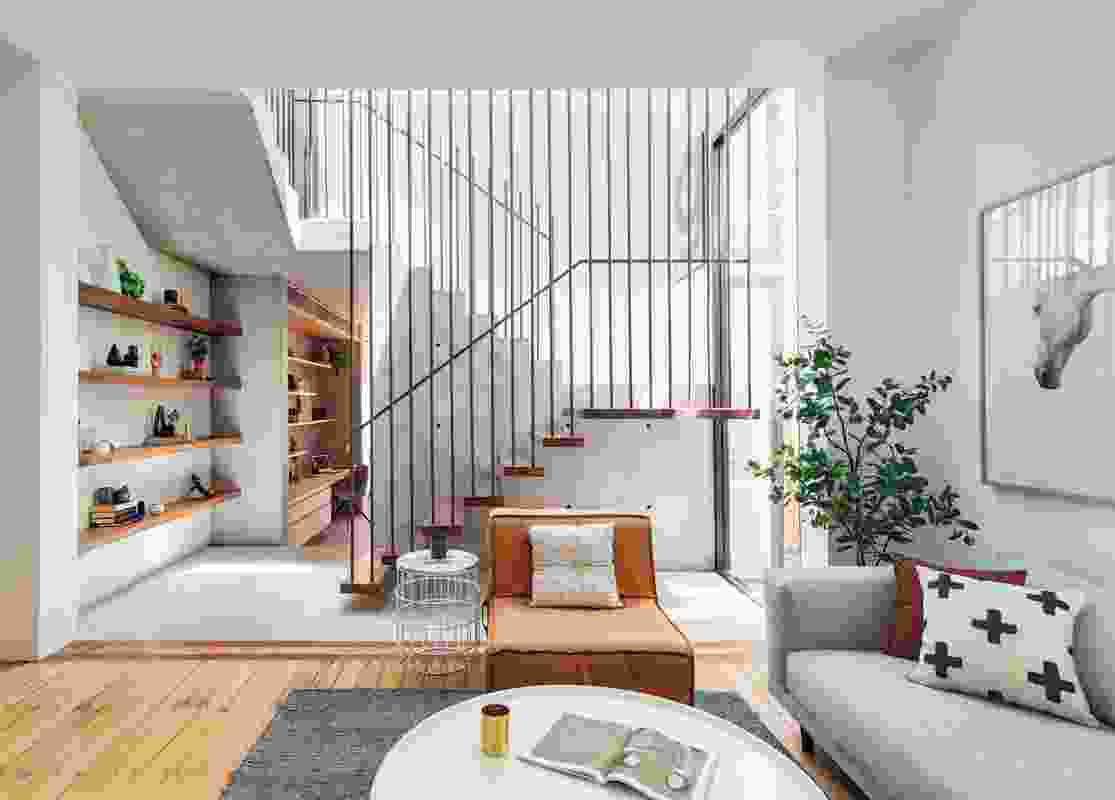 A new staircase in a central atrium marks the transition from old to new in a robust palette of concrete, recycled timber, steel and glass. Artwork: Maricou, Silver Mare. 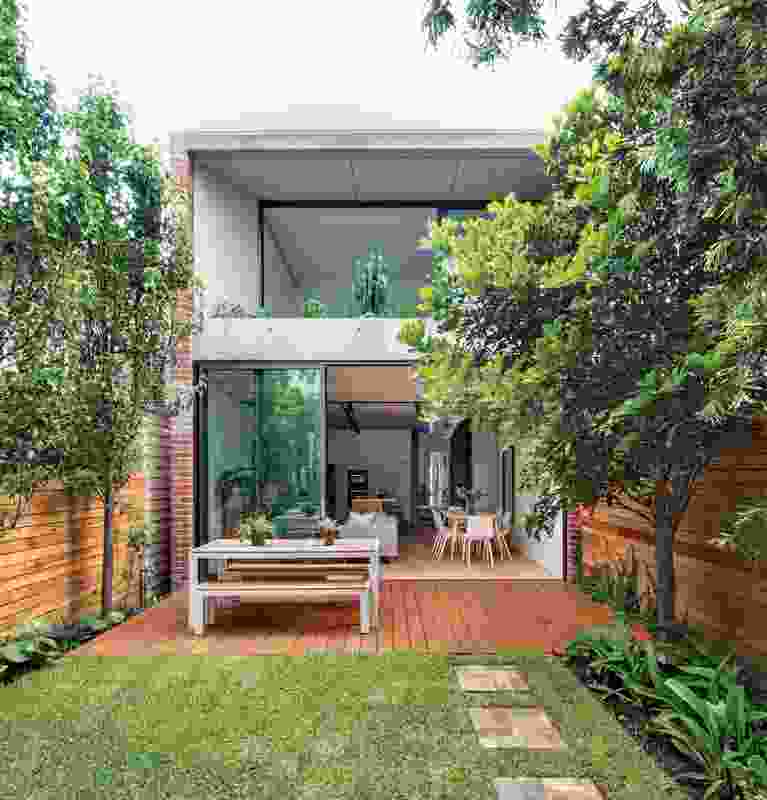 The rear addition is constructed from expressed off-form concrete and reaches into the garden. 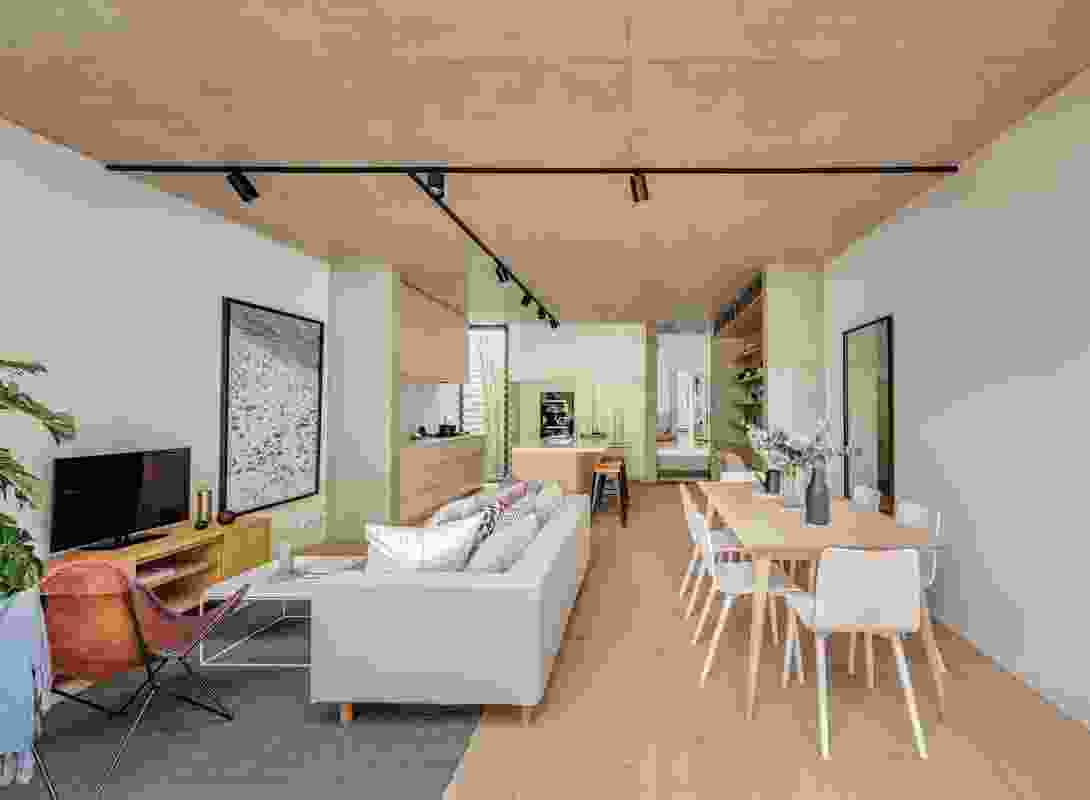 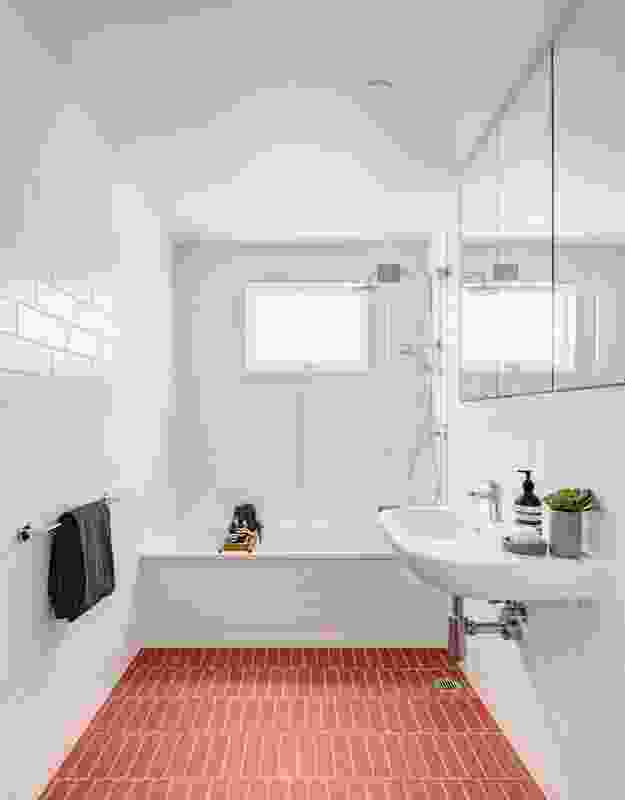 Terracotta tiles in the bathroom weave a hint of the old building fabric into the new. 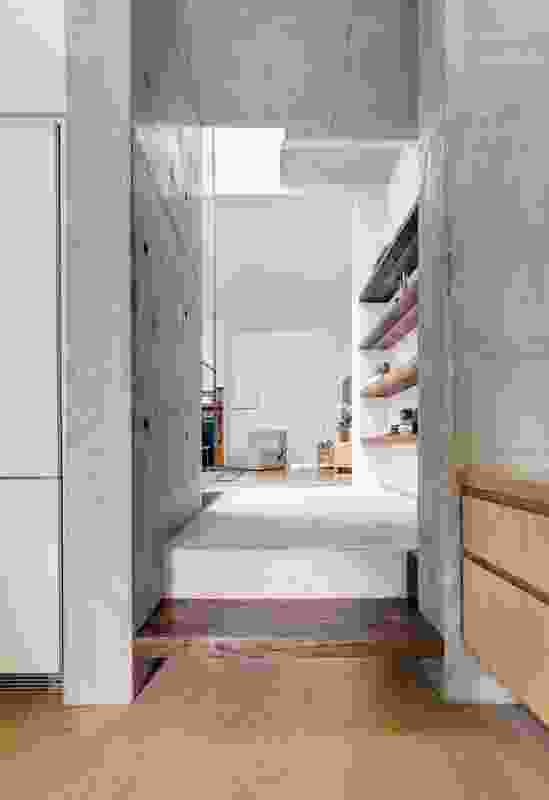 Old structural timbers from the house have been recycled into stair treads and chunky display shelves. 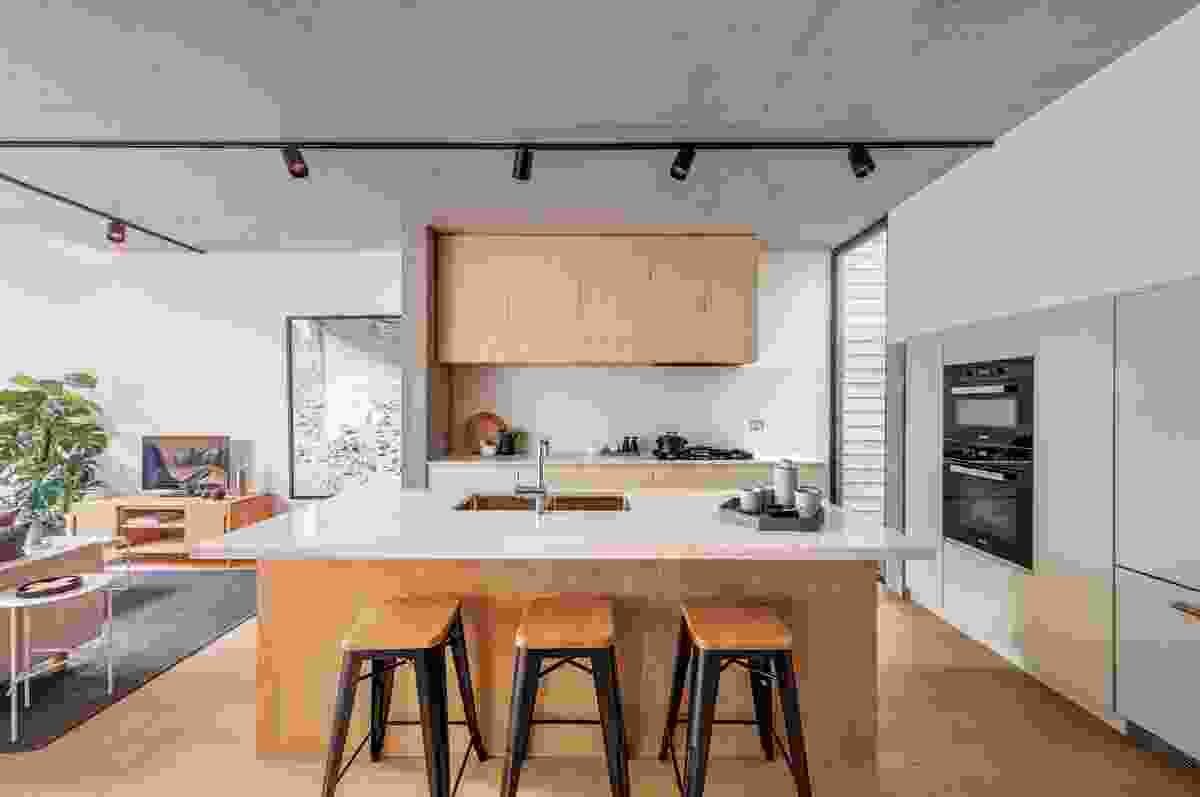 Stone and timber are used on inset kitchen joinery and the central island bench, delineating this space from the main living zone. 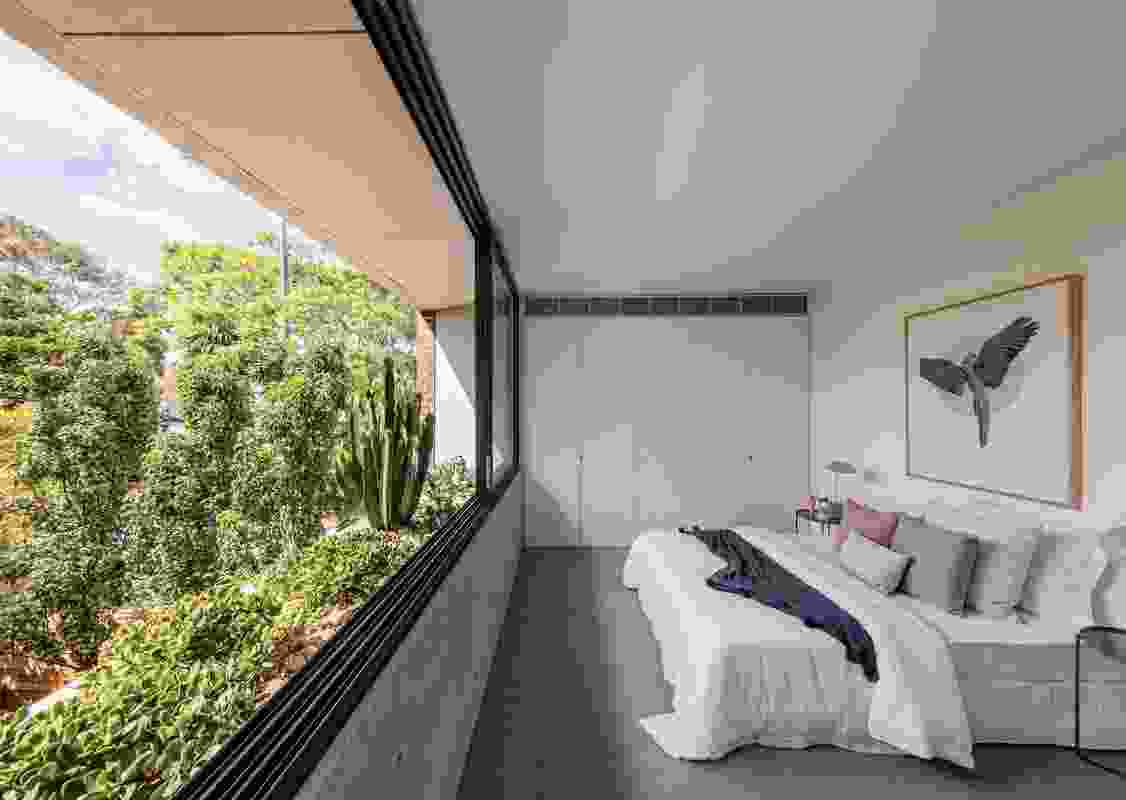 An elevated planter filled with succulents provides privacy and a verdant outlook to the upper-floor rear bedroom. Artwork: The Art and Framing Company, Love Bird IV. 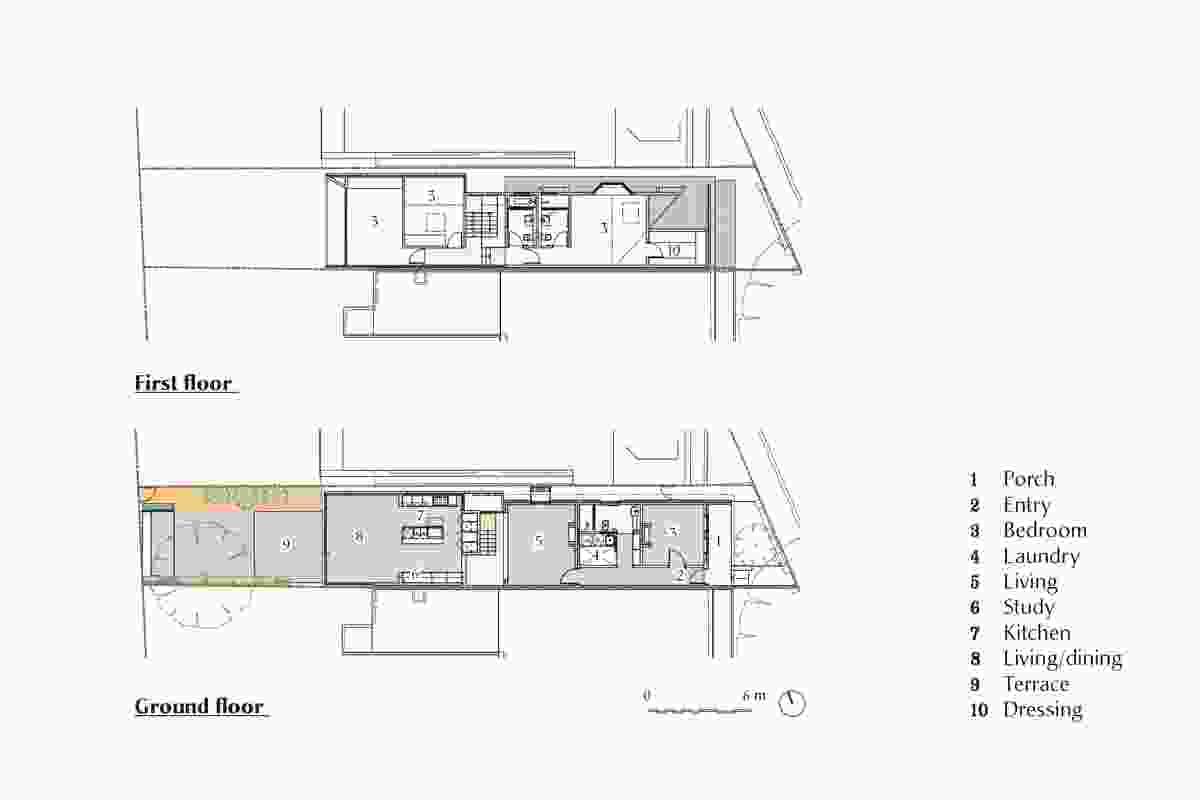 Plans of Balmain Semi by CO-AP and Nick Bell Architects. 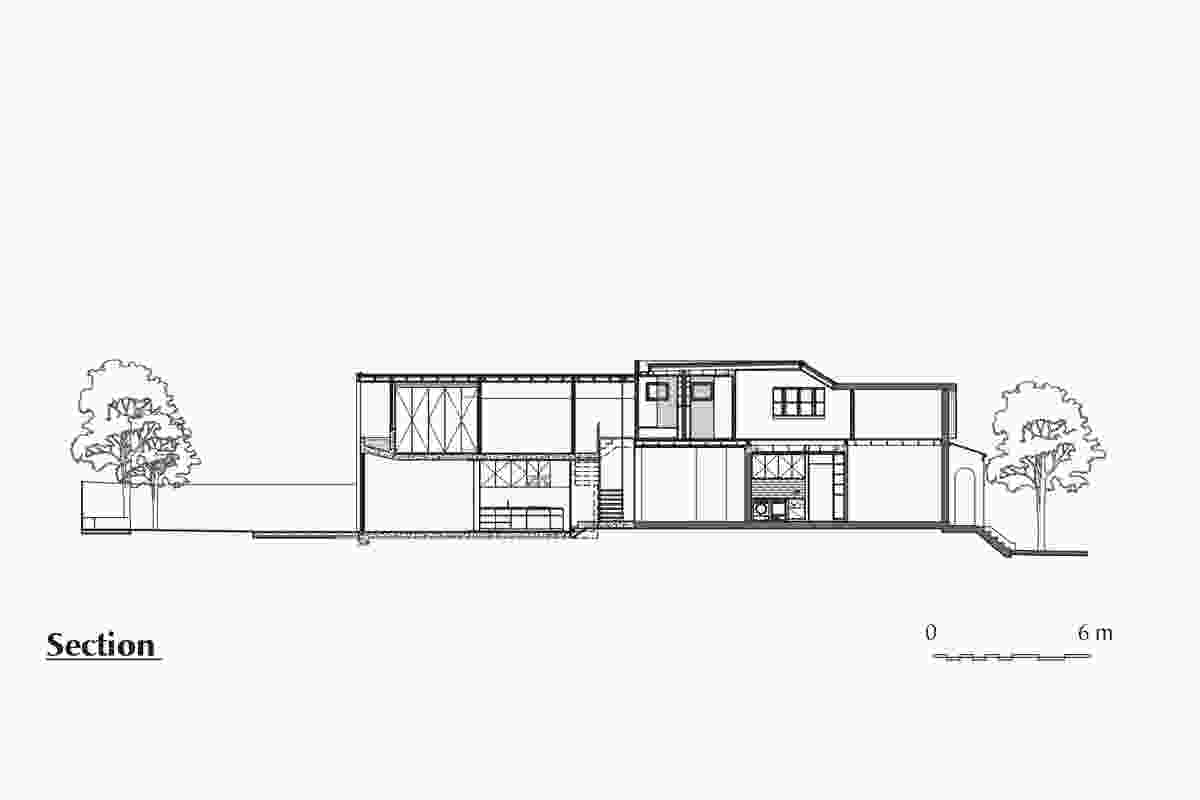 Section of Balmain Semi by CO-AP and Nick Bell Architects.