A simple but highly effective roof manoeuvre creates a light, open space to celebrate cooking and dining with family and friends.

A “cathedral” ceiling defines and enlivens this rear extension by Mihaly Slocombe Architects.

From the street you would be forgiven for thinking that Basser House, by Warwick Mihaly and Erica Slocombe of Mihaly Slocombe Architects, is just another well-renovated, inner suburban, double-fronted, red brick Edwardian. Beyond the unassuming facade a different story unfolds, one which appeals to all the senses.

From the entrance to the home, a Baltic pine timber floor, which was once a part of the original house, now runs the full length of the property, seamlessly connecting the new addition. Flanking the hallway are two children’s bedrooms, a master bedroom and ensuite, and a study, comfortably satisfying the needs of the maturing and academic family.

The front of the house – relatively unscathed by a 1970s renovation that resulted in a very inefficient rear addition – remains as it was originally intended. Each room was stripped back to its original state, with the addition of subtle yet highly detailed plywood joinery, which is continued throughout the house. The interior spaces in both the pre-existing house and the recent addition are now finished in crisp white, allowing the owners’ vast array of collectables to “speak” without competing too much with their surrounds.

The new addition to the rear of the house consists of an open living, dining and kitchen space and is where this project comes to life. The cathedral ceiling space is immediately noticeable, a form which mimics the existing structure but improves on it by adding north-facing roof glazing, creating a beautiful play on light and shadow. As the architects put it, “We stuck with a pitched, hipped roof form, but then glazed the north and south ends and contoured the ceiling to permit the deep penetration of sunlight into the house. The roof is really where it all came together for us on this project – it respects the old, allows northern light into the living spaces (normally quite tricky with a south-facing backyard), permits natural ventilation and develops an exuberance of form that celebrates the activities taking place underneath.” The glazed and folded form of the roof is highly detailed and is undoubtedly the main feature of the space.

Architects Warwick and Erica explain how their client, and now close friend, finds expression in her life in the amount of energy she spends cooking and dedicating to dinner parties with her large extended family and friends. “A positive cooking and dining experience was central to the brief; there was never any doubt that the kitchen would be the heart of the home.” It features the same detailing found throughout the rest of the home, incorporating marble benchtops and European appliances. Behind the kitchen is a functional scullery and laundry, which keeps all of the services together and everywhere else much cleaner. The kitchen and living spaces are connected to the south-facing courtyard via timber bifolding doors, making the whole rear of the house appear seamless.

The environment created outdoors is reflective of the interior in its ability to provide a platform for entertaining. From this position it is obvious that the house operates as a whole, with each element closely tied to the next. As Warwick explained, “The relationship between new and old in Basser House can be found in every aspect and at every scale, from the roof form to brickwork patterning, planning and materials selection.”

The solutions employed to handle the ventilation, heating, cooling and light are what the architects like to consider “low-tech.” This is an approach which is becoming lost in our current way of life but has never been more valuable. Very few things in the house are operated automatically; manual systems are the preferred option for both the architects and the owner, due to their durability and the connection they provide to the elements. “Embodied energy, materials sourcing and life-cycle requirements are considered from the very beginning of every project,” says Warwick. 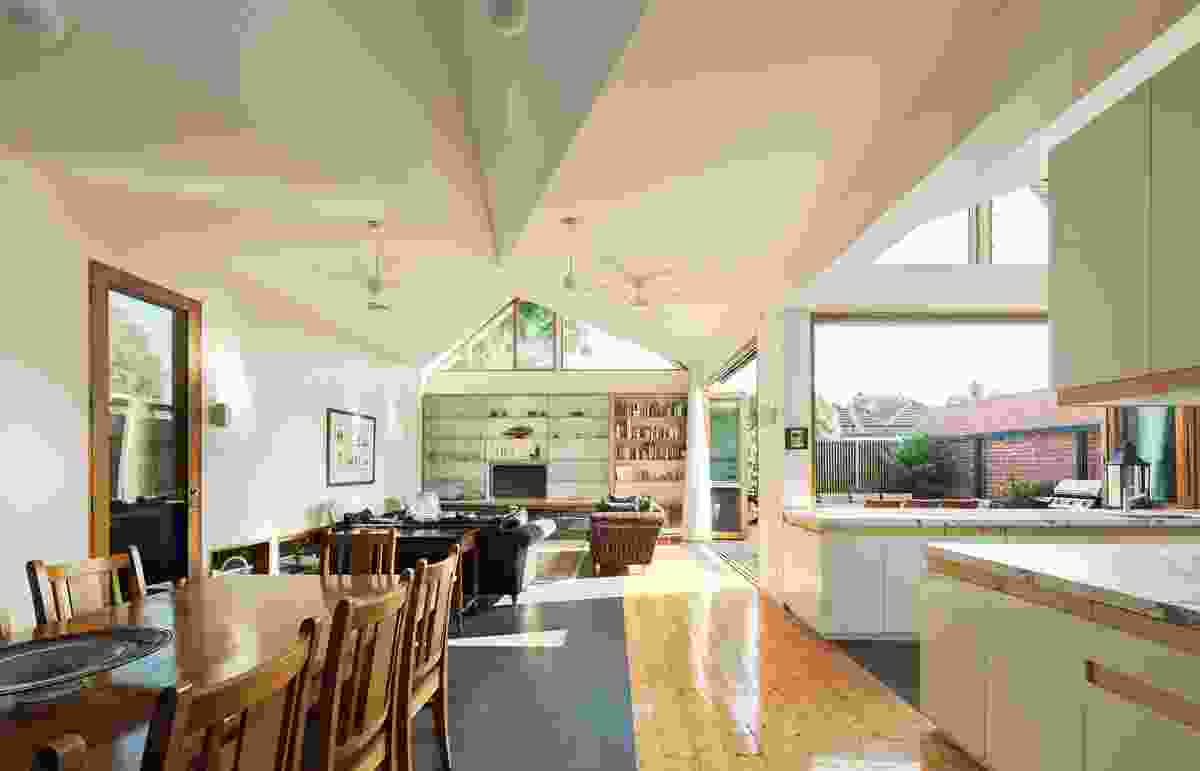 A “cathedral” ceiling defines and enlivens this rear extension by Mihaly Slocombe Architects. 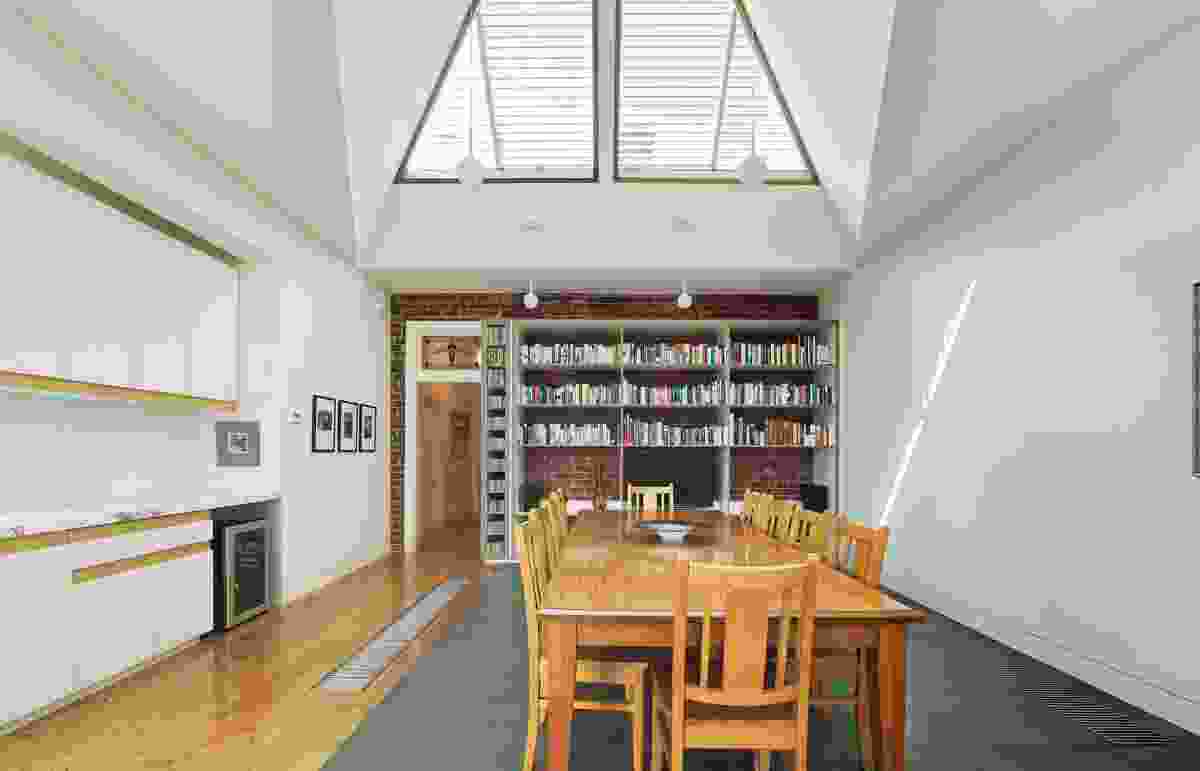 North-facing glazing in the pitched roof brings light into the southern living area and backyard. 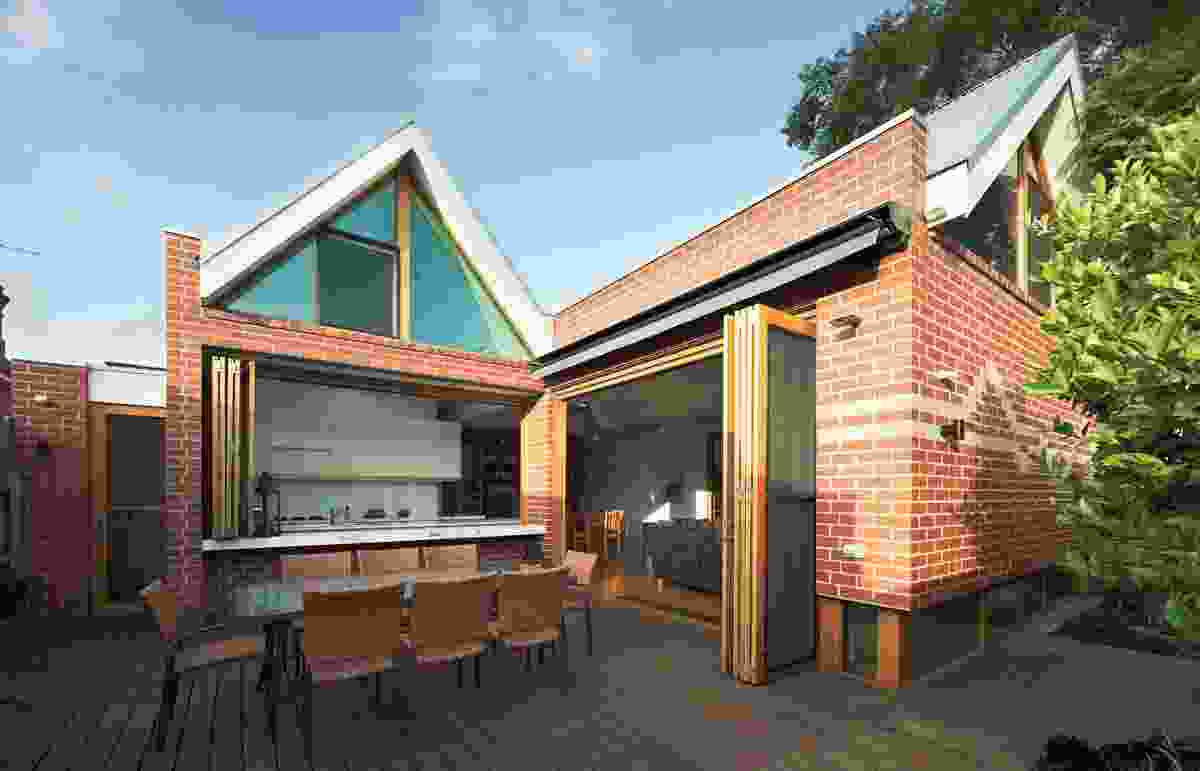 A “positive cooking and dining experience” was important for a client who loves dinner parties. 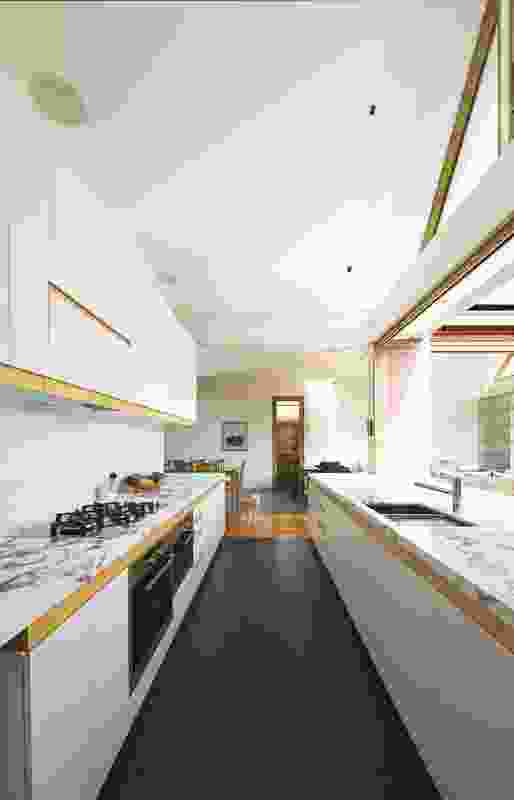 New and original parts of the house are united by crisp, white joinery as well as a Baltic timber hallway.