The proposed stadium over the rail yards at Central Station by Bates Smart.

Amid the NSW government’s controversial plans to demolish and rebuild the 30-year-old Sydney Football Stadium (also known as Allianz Stadium) at Moore Park, Bates Smart has proposed an alternative – to build a new stadium over the rail yards at Sydney’s Central Station.

In November 2017, the NSW government announced it would demolish and rebuild two major stadiums in Sydney at a cost of $2 billion. Facing a public backlash, it later announced in March 2018 that Sydney Olympic Stadium, designed by Populous and Bligh Lobb Sports Architecture, would instead be refurbished. The Cox Architecture-designed Sydney Football Stadium, however, would still face the wrecking ball.

Bates Smart’s proposal has come as a reaction to the government’s “wasteful” demolish-and-rebuild plan for Sydney Football Stadium that it believes would have little other public benefit. “The only thing it would achieve is code compliance,” said Bates Smart principal Philip Vivian. “There’s no benefit other than the fact that they thought it’s too expensive to upgrade it.

“But rather than criticizing [the government] in the way everybody is, we thought let’s help them.

“We started thinking [Moore Park] really not the right place to build a stadium. It’s generally inaccessible by public transport and being out in the eastern suburbs, while the vast majority Sydney people live in the west, it’s not for the whole of Sydney.

Instead, Bates Smart proposes to build a stadium roughly over the Devonshire Street underpass. “Central Station is the obviously the most connected point in the whole of New South Wales,” Vivian said. “The stadium would sit above the government’s investment in metro and light rail and there’s already the suburban line.”

In addition, the proposal is intended to connect Surry Hills to the east and Chippendale to the west, which are currently divided by the rail yards.

It would also catalyze development around Central, which Vivian said could be delivered in a public-private partnership arrangement. Vivian also said the proposal could mitigate the potential economic loss while the Sydney Football Stadium is being rebuilt.

“One of the problems is if you demolish Allianz Stadium, you destroy the revenue generating device for that time,” he said.

“What we’re saying is Allianz Stadium can keep operating, there’s no economic down time, and when the new stadium is finished, the sports can move over and then you can demolish Allianz stadium and return it to parkland.”

Furthermore, the architects argue, a stadium in the centre of the city could “maximize the economic benefit for the state,” by being co-located with bars, restaurants and entertainment venues.

According to the government’s own business case, reconstructing a 45,000-seat stadium at Moore Park would only result in a benefit/cost ratio of 0.94.

Vivian pointed to the example of the Oriole Park at Camden Yards in the American city of Baltimore. Designed by Populous, the baseball-specific stadium contributed to the economic regeneration of the neighbourhood. According to Populous, spending in downtown Baltimore increased 260 percent the year the stadium opened and continues to have an impact more than 25 years on.

A stadium at Central Station would be “turning the model of a stadium based on a suburban model of motor vehicle transport back into an urban model,” according to Vivian.

“It shouldn’t be about automobile transport. The future of Sydney should be based on public transport.”

Bates Smart has shown the proposal to the Department of Premier and Cabinet but was told “it was too late.”

The NSW government has commenced a design competition for the new stadium at Moore Park and works are due to begin in late 2018. 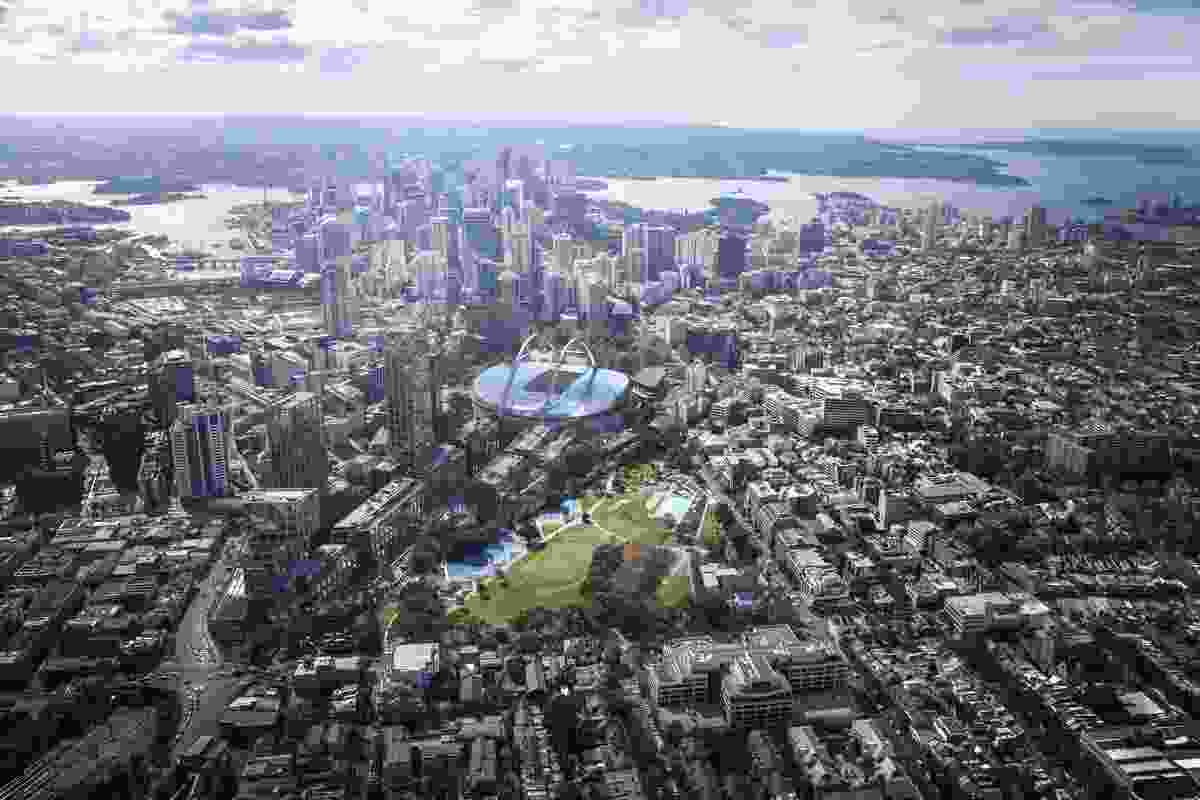 The proposed stadium over the rail yards at Central Station by Bates Smart. 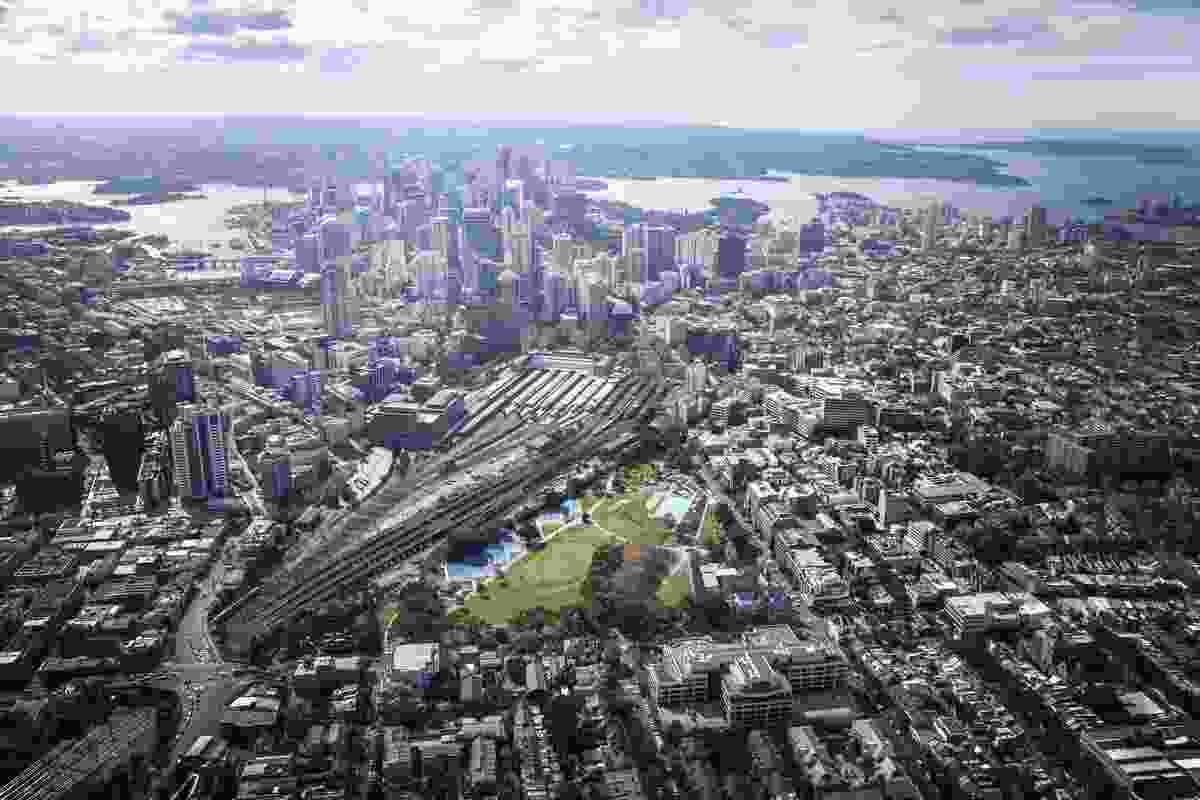 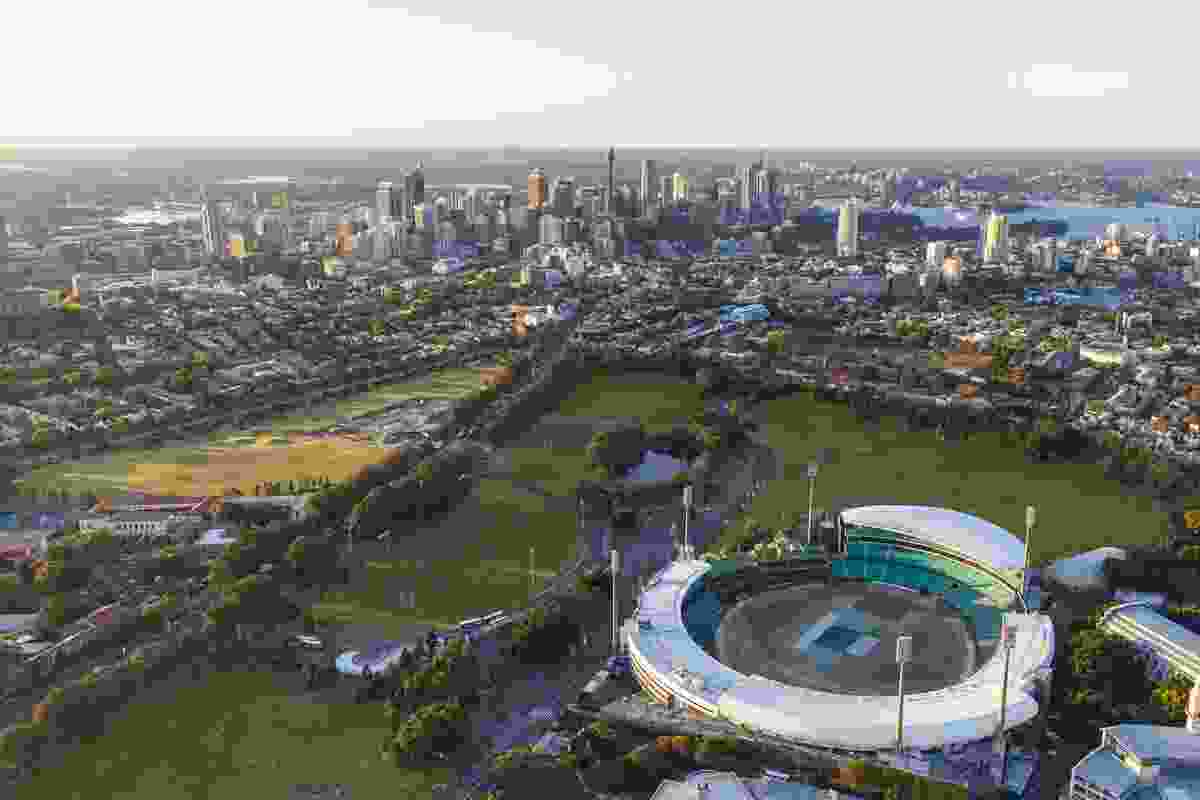 Bates Smart’s concept proposes to return the site of Sydney Football Stadium at Moore Park back to park land. 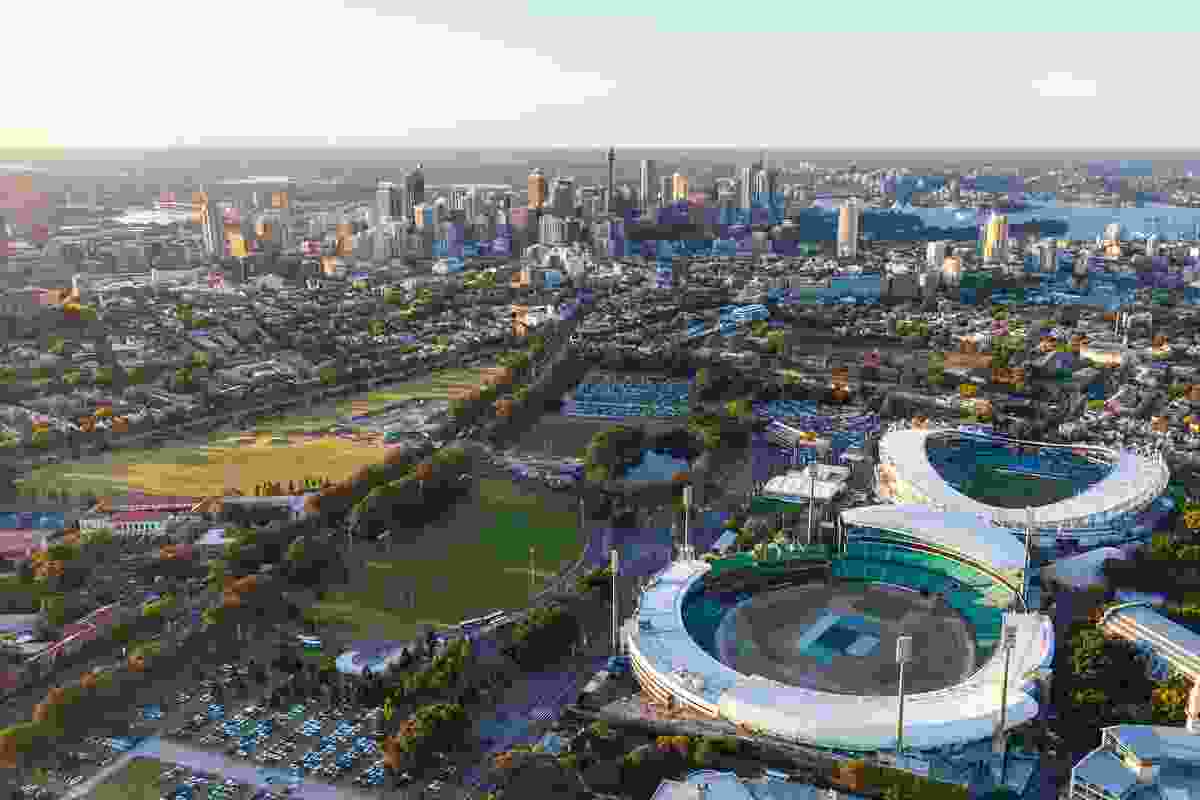