Exhibiting an affinity for sculpting space and material, B. E. Architecture has rigorously honed its craft for more than two decades, resulting in an extensive portfolio of refined residential architecture.

To imbue new architecture with the graceful qualities associated with age and history is a common ambition among architects, though perhaps more often espoused than attained. Aspiring to a timeless sense of permanence and solidity is laudable, if it avoids the obvious pitfall of historical pastiche, but actually achieving this requires both strategy and technique.

B. E. Architecture has put more than twenty years into this pursuit across a range of project types, focusing primarily on housing. The firm has amply demonstrated, through its diverse portfolio, that there is both a science and an art to that most prized of sustainable characteristics: the holistic building that intrinsically resists the future impulse to renovate, remodel or even outright erase through demolition. This is only achieved through the creation of enduring value, for now and for the future – an endeavour based, in turn, on a series of values that the directors articulated in our interview.

Over the years, B. E. Architecture has evolved a flexible language of details and flourishes embedded in the principles of bespoke design and manufacture. Fully embracing the “hand-built” aspect of each construction process (acknowledging, of course, that most construction is still hand-built, more or less), the firm has developed a continually evolving physical and material language that imparts character to the smallest architectural moment.

A good example is the St Vincent’s Place Residence in Albert Park, Melbourne, whose interior resolution sits so comfortably with the remnant heritage facade (the facade was the only bit of the original building left after decades of architectural mutilation and erasure). Skirtings and cornices are in no way “historic” and do not seek to reproduce anything of any recognizable period. Nevertheless, the soft curves and oversized profiles sit pleasingly with the period facade and the setting, which is subject to a significant heritage overlay. Visitors to the house refer to it as a “renovation” rather than a new build behind a remnant wall, a subtle misperception that pleases design director Broderick Ely no end.

Negotiating the identity and presence of a historic “front house” while adding a rear extension is something the firm embraces with pleasure, seeking inspiration in the textures and detail – the gravity – of the historic without seeking to mimic it. The response to the weight of heritage can be a seemingly artless counterpoint, as in the creation of a “couple of planes” that extended the rear of the Hopetoun Avenue Residence in Sydney’s Vaucluse. Described by Broderick as a “non-building,” this extension behind a Federation period structure resolved the new occupation of the rear of the site with a minimal series of horizontal planes in tactile materials, open to harbour views. The result is minimal while being far too rich texturally and materially to be thought of as minimalist.

Alternatively, the response to a site’s heritage can be more interactive and interventionist, as is the case with the renovation of the Hopetoun Road Residence in Toorak, Melbourne. Working directly with a 1915 remnant building met the needs of the client, who was averse to an entirely new house and valued the timeless characteristics so cherished by the architects. The result is a seamless weaving together of old and new, with moments of Miesian horizontality meeting newly constructed gables and other vertical elements, all existing in complete harmony without apparent contradiction.

Physical resolution of material and detail is just part of the values narrative. The team at B. E. Architecture also undertakes a process of constant questioning about what a building means to a client and in particular what each house, and its various moments and components, means to each family – in a thousand tiny, specific, interconnected ways. This dissection of the domestic is both exacting and forensic, lingering on such seemingly incidental matters as where the telephone plug goes in the bedroom, or precisely where a light is positioned to facilitate late-night reading in bed.

Another demonstration of the practice’s ability to interrogate these questions, and to interpret the qualities of age and history, is a new build completed in Armadale, Melbourne. The client for the Armadale Residence had happily occupied a 1920s house for several decades and sought to downsize once their children grew up. While seeking an entirely new house, they were insistent that it possess the qualities of timelessness and solidity that they prized so much in their previous home.

The result is a symphonic poem in granite, a house that required stonemasons to work for twelve months in an extended building program, shaping and setting more than 260 tonnes of granite blocks of varying sizes. Even the soffits of the eaves are granite blocks, a commitment to materiality that saturates the building. With a delicate counterpoint of timber screens introduced to control light and ensure the privacy of the occupants, the resulting house is, reportedly, deceptively light and airy when viewed in the flesh. The granite blocks contain a crystalline fleck that imparts a perceptual lightness despite the overwhelming mass.

With a sense of solidity and agelessness embedded in the very stones of this building, the interior, awash with light, has been executed to meet and exceed the needs of the occupants in every respect. In the process, new opportunities for daily living emerged – for example, the client can shower outside daily in a contemplative garden courtyard on the first floor with complete privacy and shelter in all weathers. Attention to such possibilities has extended the brief well beyond the initial expectations of the clients and the result is not just good design personified, but also a very contented set of occupants.

B. E. Architecture has a remarkably consistent and grounded portfolio of works. Over more than two decades of practice, there has been a process of continuous and subtle refinement rather than outright evolution. This is not surprising given the team’s concentrated, and entirely conscious, focus on distilling the qualities of timeless residential architecture. The firm has created a series of houses and other architectural works that will, by virtue of their design and physicality, endure long after the current group of occupants has moved on. 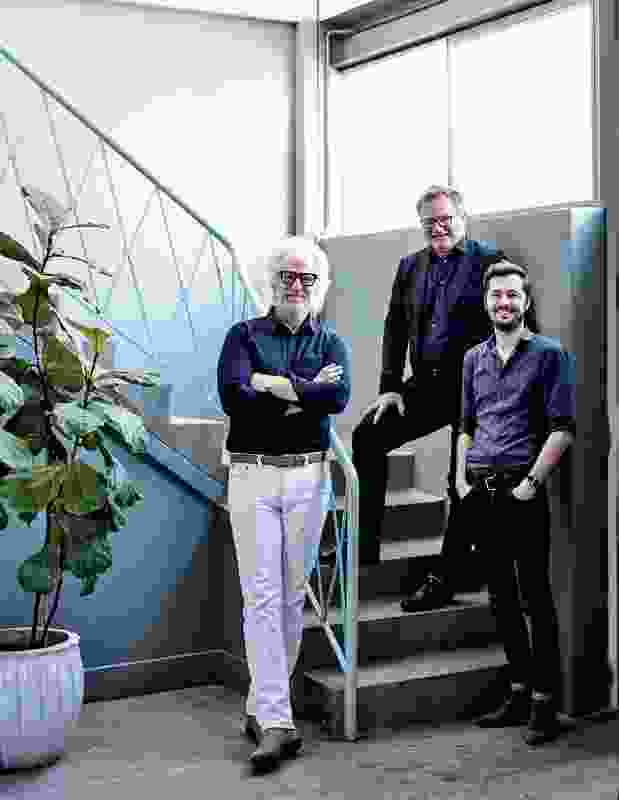 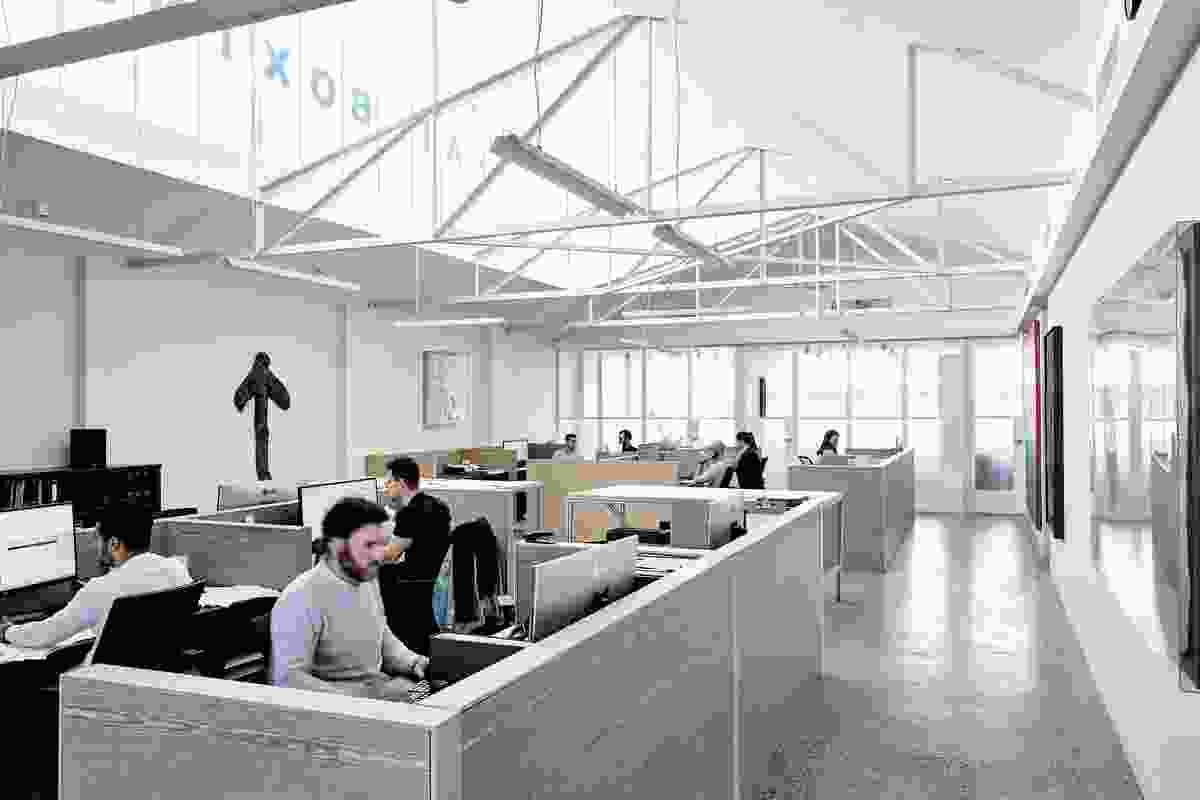 A substantial “renovation” sits behind a heritage facade at St Vincents Place Residence (2017). 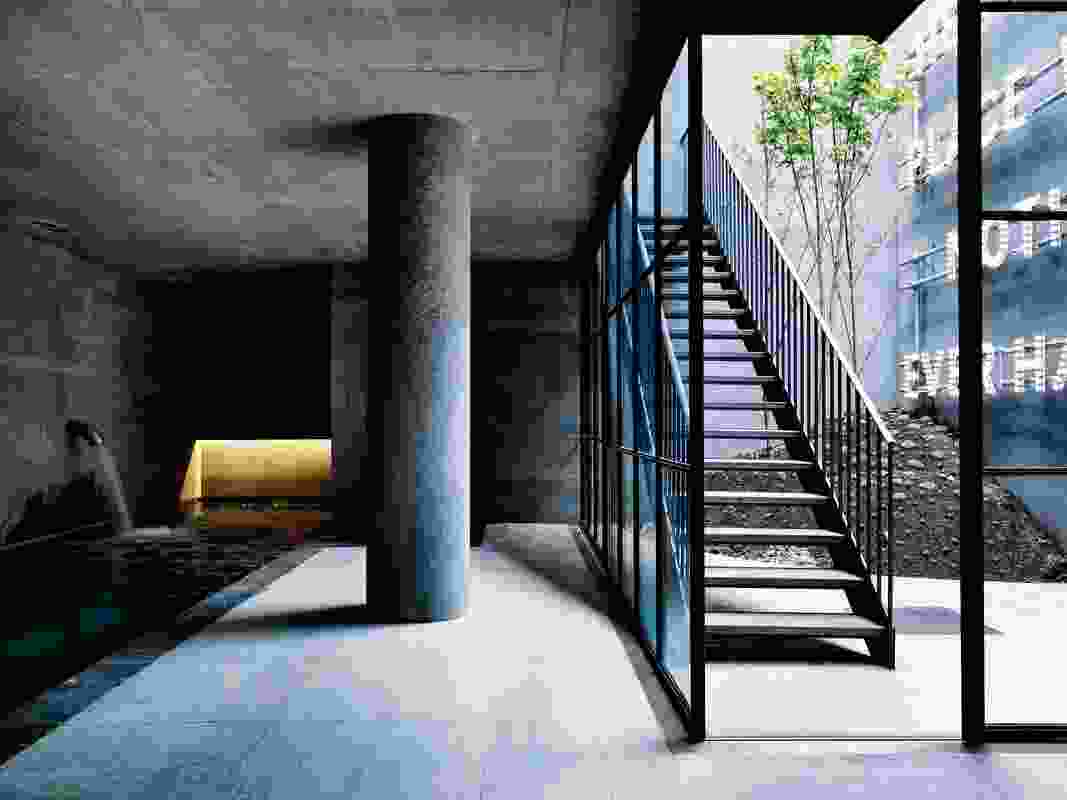 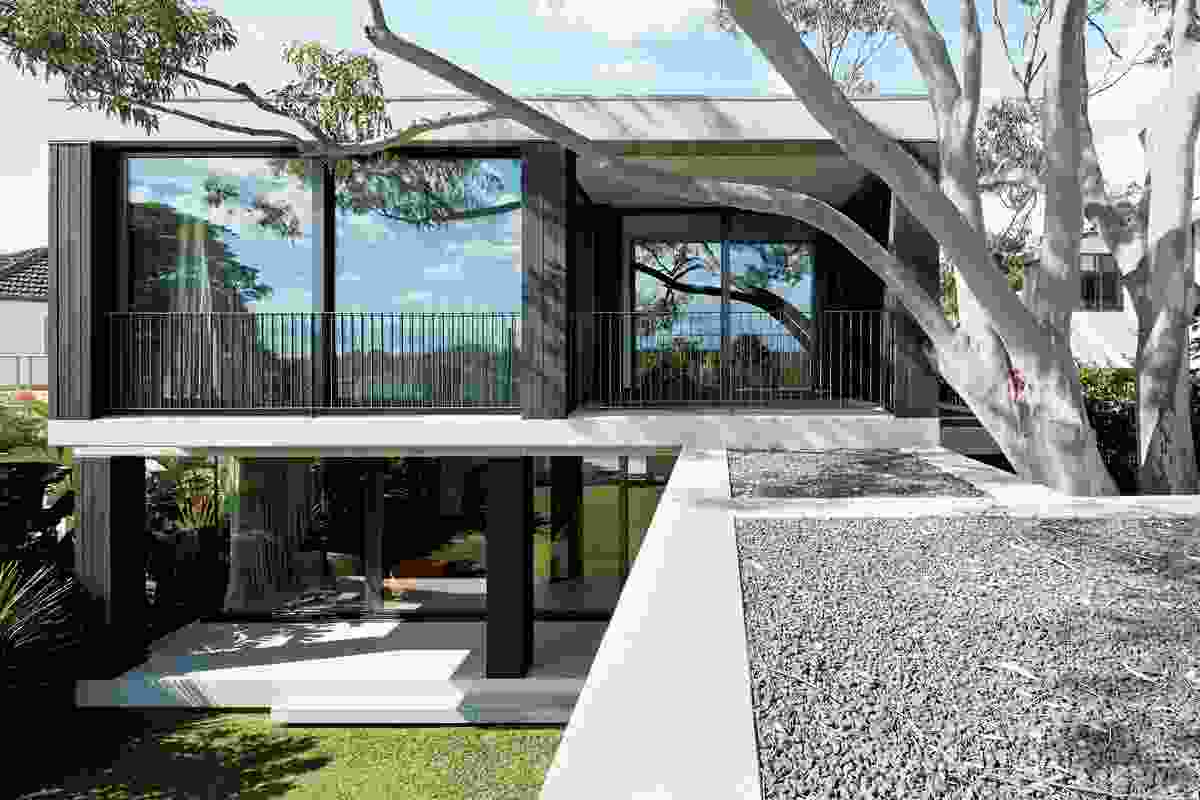 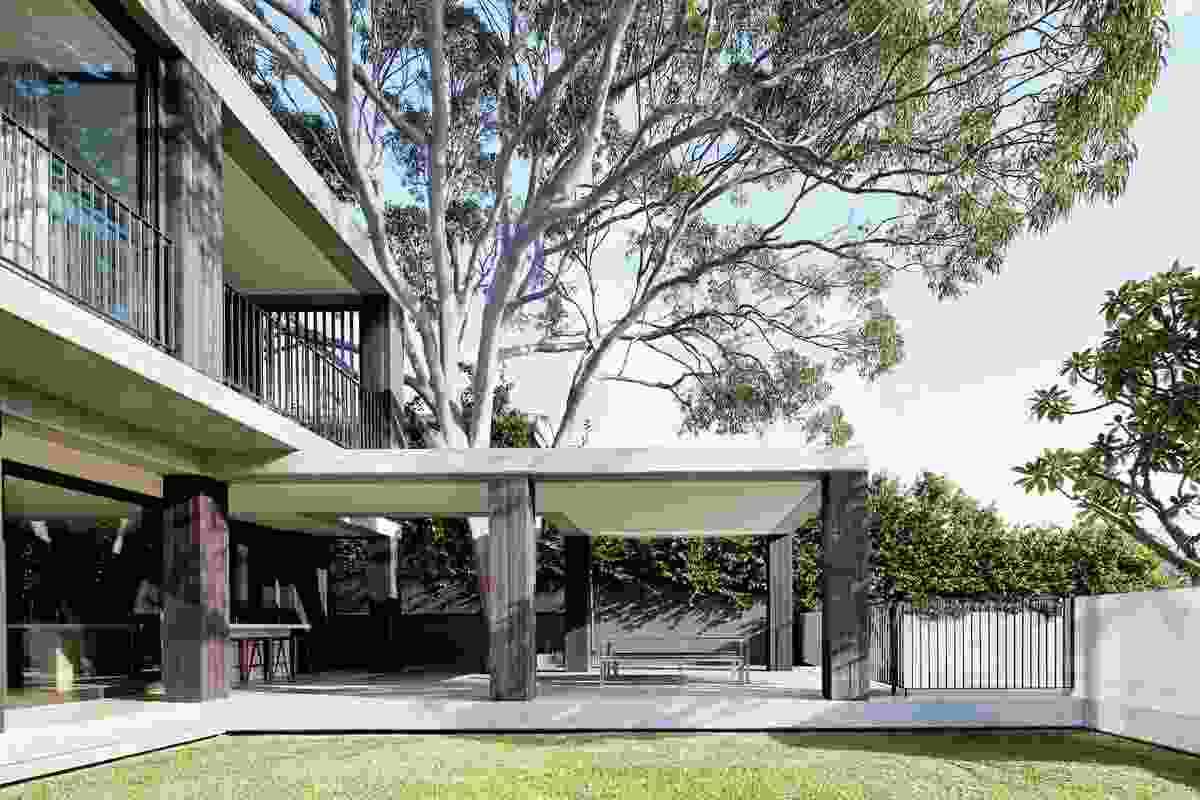 Horizontal planes connect the living areas at Hopetoun Avenue Residence to harbour views and the garden. 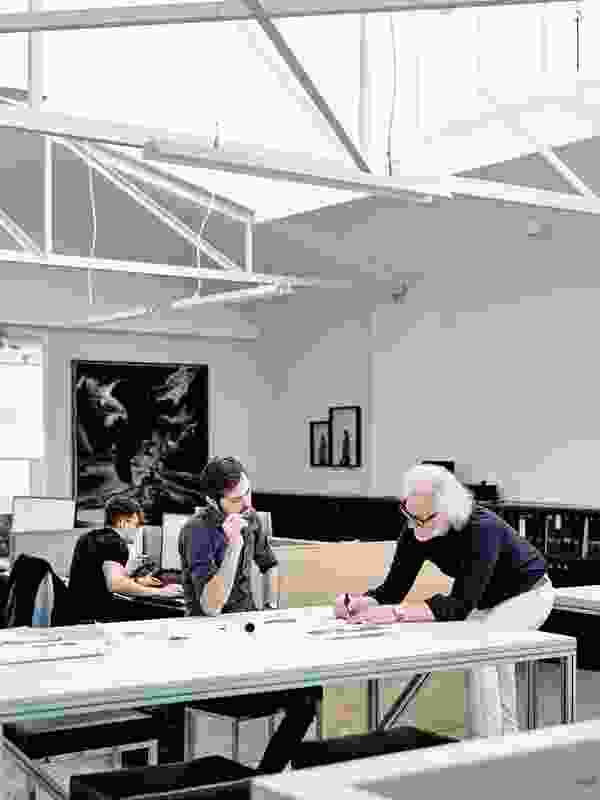 he team at B. E. Architecture has developed a flexible language of details. Artwork (L-R): Ken Unsworth, Ben Kelly. 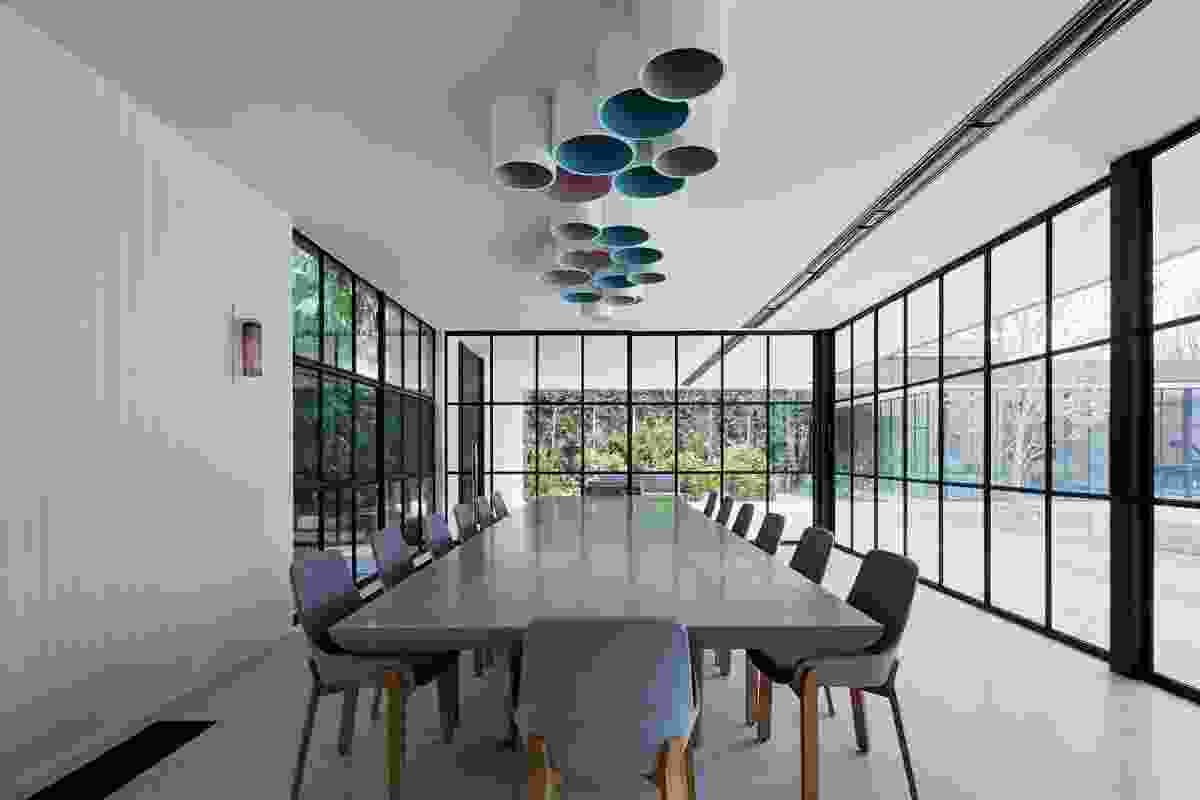 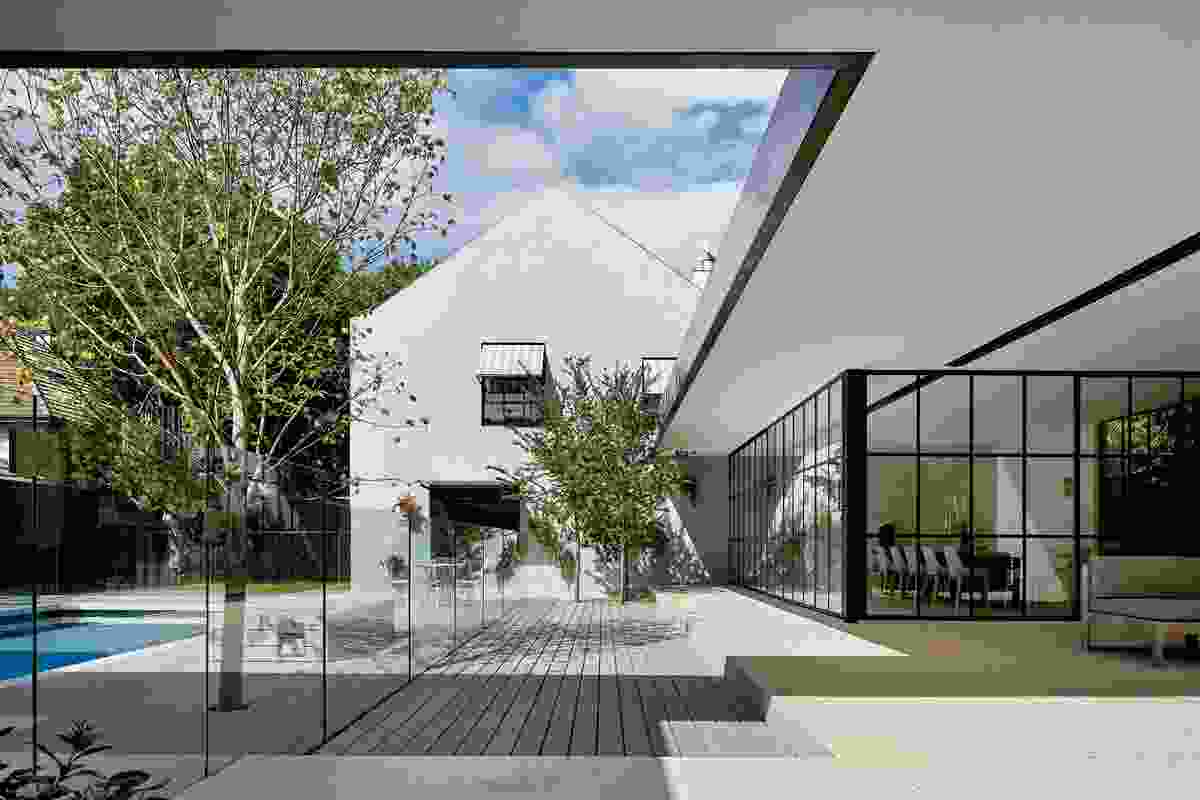 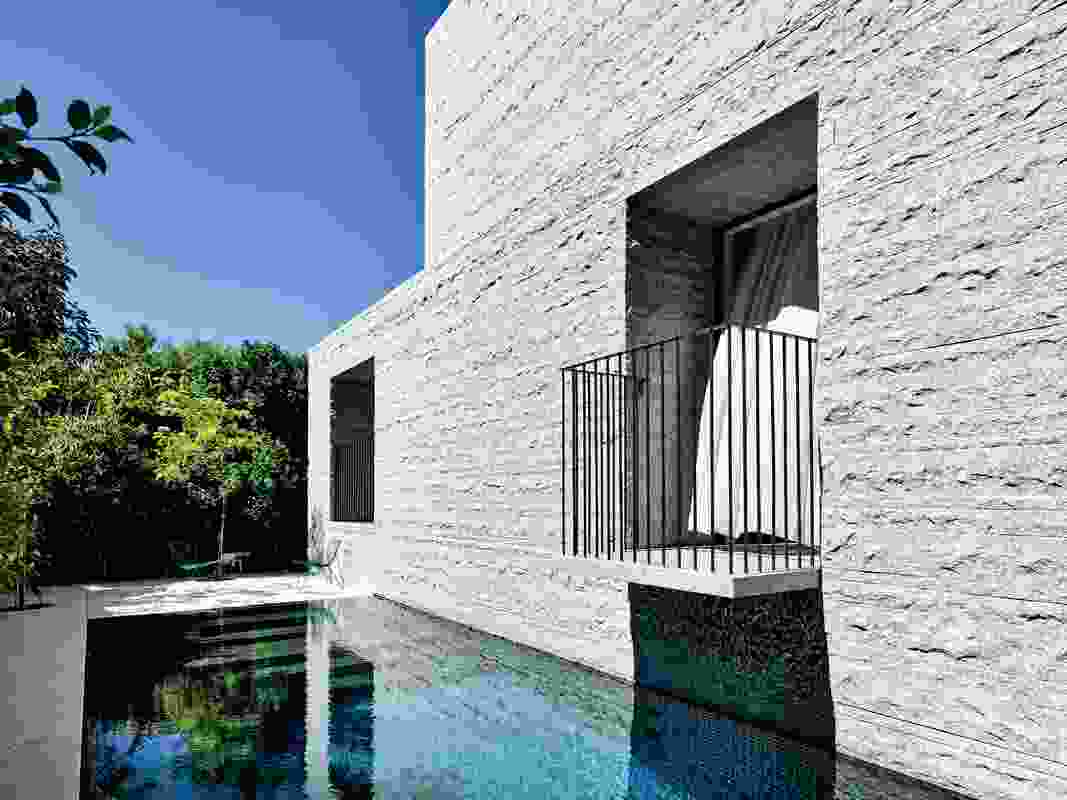 Crystalline granite at Armadale Residence (2017) bestows a sense of weightlessness upon the monolithic form. 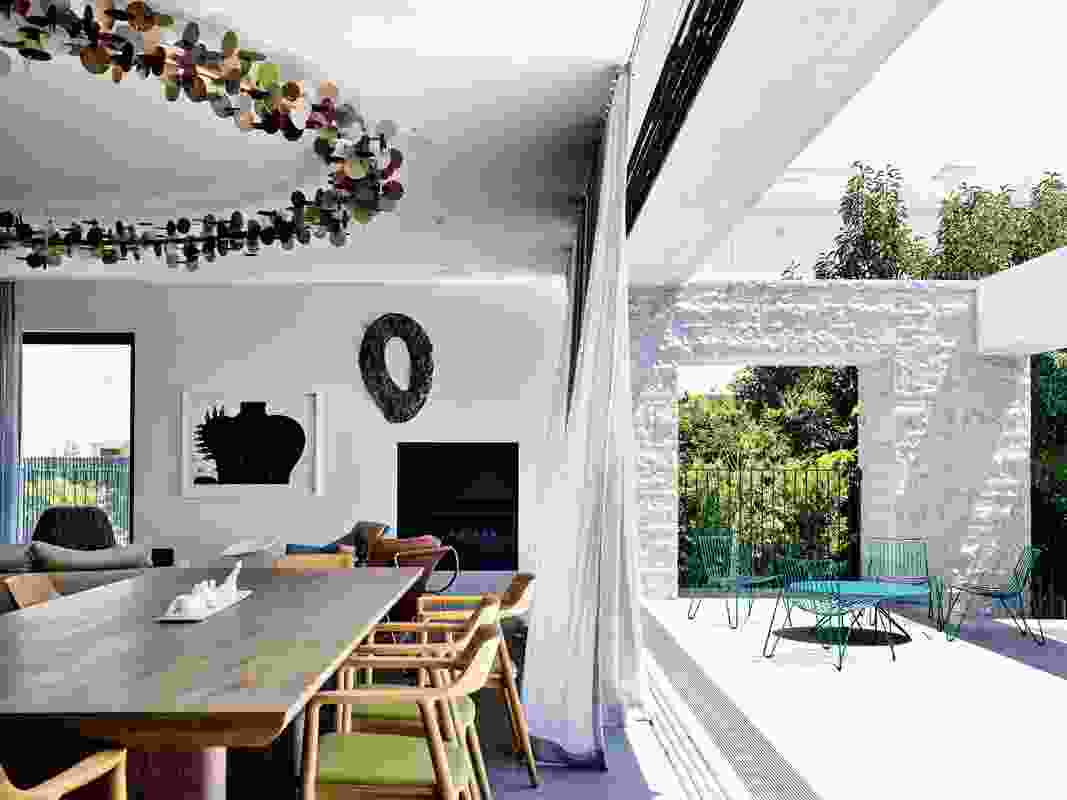 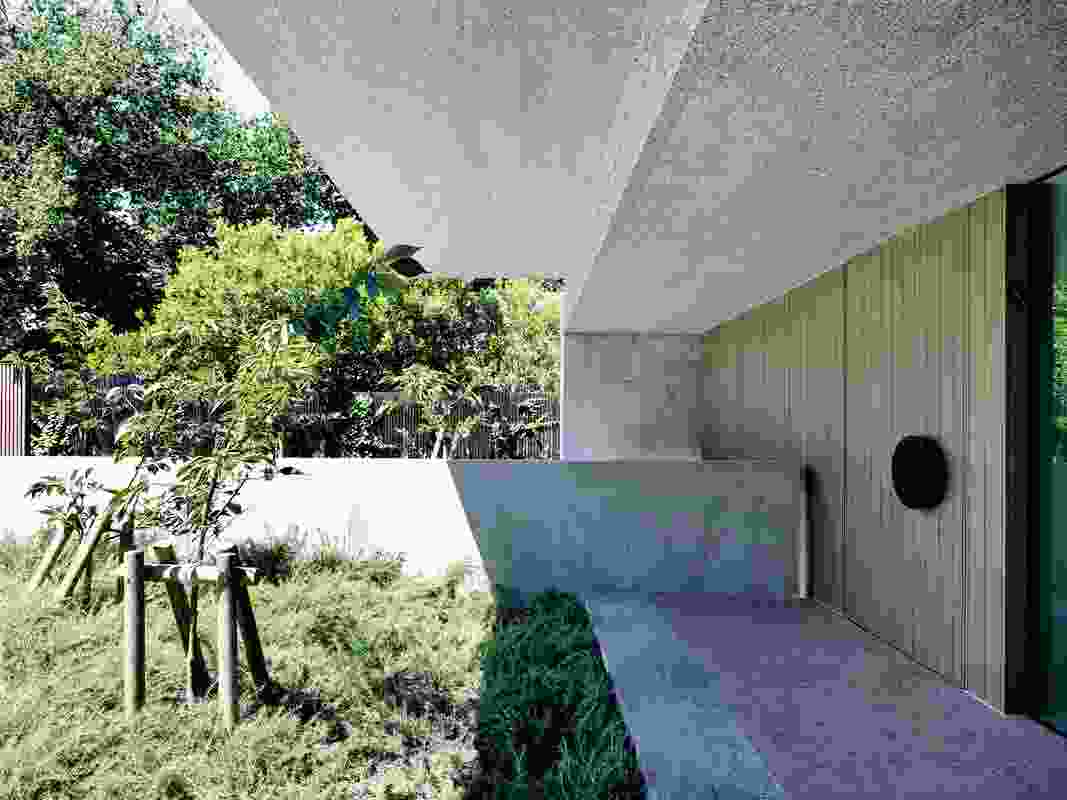 The granite soffits on the eaves at Armadale Residence exhibit a devotion to material consistency.