Canadian architect and artist Philip Beesley spoke to Timothy Moore in Sydney about his architecture that physically responds to its setting.

The architecture of Philip Beesley breathes, blinks, sways, and even sprays in response to the setting in which it is placed. In this complex possibility of movements, Beesley affirms the potential for architecture to provoke emotion through a sensitive interaction. Beesley was in Sydney in June 2012 to install his latest work in his Hylozoic Series – Sibyl – on Cockatoo Island for the 18th Biennale of Sydney when Timothy Moore spoke with him for Architecture Australia about the importance of responsive design in both the design process and its realization.

Philip Beesley: I am currently on Cockatoo Island preparing for the Biennale of Sydney, surrounded by the vast trussworks of a historic shipyard. Nearby, there are big, sandstone walls with the marks of convicts on them – from when the site was an imperial prison. Many artists are around me creating installations, some at epic scale. Scissor jack lifts are going up in the background and there is fog filtering out from a space behind me.

Timothy Moore: You are in Sydney to install the latest in your Hylozoic series – Sibyl – a meshwork of micro-robotics and fabricated textiles (or artificial forest of fronds and feathers) that responds to human movement. What is the origin of the term “hylozoic”?

Hylozoic has Greek origins; it suggests that life comes out of material things, and it suggests that there are no strict boundaries between the inert matter of rock, gases and liquids, and living things. All things are potentially animate.

PB: Hylozoic has Greek origins; it suggests that life comes out of material things, and it suggests that there are no strict boundaries between the inert matter of rock, gases and liquids, and living things. All things are potentially animate. Although being rooted in mythology, when we look at recent progress in the science of artificial life and information technology there does seem to be an increasingly diffused line between organic and inorganic matter. So, we could say there is some evidence that the idea is coming true. It’s an interesting place to generate practice, with many iterative layers of development and collaboration. In the studio, we draw quite heavily on special disciplines: artificial intelligence, chemistry, electronics engineering and distributed computation. We also work quite directly from traditional techniques learnt in architecture school: spatial thinking, simulation programming, orthography and the ability to coordinate across multiple disciplines. Our working method uses repeated cycles that combine these different things, and we use collaboration to bundle our skills together in search of a highly resilient aggregate.

TM: It is a paradox of sorts: How do you deepen your knowledge when you are working on the edge of your expertise?

PB: That could seem like a classic quandary: How can you work precisely while spanning multiple disciplines? However, if we introduce the factor of time, and shift from the presumption that a single person is a fully integrated, bounded territory, it becomes possible to accumulate a substantial amount of depth while operating in multiple dimensions. I think it can require a shift in the conception of what individuals are. By working collectively, all kinds of questions are raised. It raises questions of authorship, it confounds signatures and it can sometimes compromise personal integrity. However, we don’t need to say this is unique to the studio. The practice of architecture in general is intensively collaborative. It could be said that we are dilettantes in our practices. Rather than apologize for that, I’d rather take on the idea of the generalist as a strong role. Perhaps the word “dilettante” could be a mark of pride, implying an individual that includes many things. I would like to think that irony could be a strong way of working.

TM: Does that mean we avoid hierarchy altogether? Or do we set some limits in order to test where the boundaries are?

Think of the funny bone in your elbow, or what happens if you burn your hand. Your hand will move away from the flame before your brain has time to react. These short circuits make for resilience in a system.

PB: In the past few years our studio has gone through a period of being interested in emergent, bottom-up systems. We tended to be suspicious of hierarchies and of the classic pyramid of control from the top down. However, while emergent and incremental systems have tremendous interest, the organizational model that I now follow is where multiple nested relationships work together, following a “subsumption” principle where many independent groups can work in organized ways. It involves small clusters, which have their own reflexes and do not go through a central command. Think of the funny bone in your elbow, or what happens if you burn your hand. Your hand will move away from the flame before your brain has time to react. These short circuits make for resilience in a system. What I’m describing here has very strong common ground with the architectural method of integrated design practice. By gathering insights across the project team as early as possible and setting up communication systems so that there can be regular cycles of feedback, you can get a thoroughly integrated system.

TM: In this shift back and forth, in this multi-scalar movement, is there an element of corruption or mimesis?

We’ll go through many cycles where we push and destroy things, where they buckle, to see fragility in the system. This practice of designing does not simply make things vulnerable, it reveals some surprising resiliencies.

PB: The classic warning that we learn as architecture students is that things do not automatically scale. Each scale has its own characteristics. The intimate and delicate grain of some of our studio’s work is quite different to the kind of scale involved in stretching a canopy over a large crowd. I think something can be said for working in nested loops that translate across scales. One of the agendas that we are attempting to pursue is a radical kind of sensitivity and resonance in the performance of the component systems we are crafting. We are attempting to generate a value system that is not defined by durability or inertness, but is defined by how reactive and potent something is. That kind of charged relationship, the potency of something as opposed to the durability of something, does invite some moving back and forth past the ability of components and systems. We’ll go through many cycles where we push and destroy things, where they buckle, to see fragility in the system. This practice of designing does not simply make things vulnerable, it reveals some surprising resiliencies. When you apply an individual force with huge pressure, it necessarily impacts neighbouring components. Those components might buckle or crumble slightly but they are supported by the interwoven mesh of other parts. This process produces really interesting and rich behavioural results that allow us to investigate how things can work together.

TM: With a constant emergence and its resulting serendipity, however, isn’t responsive architecture physically tiring for a human being?

PB: [Laughs.] Yes, our work sessions can sometimes be exhausting. Yet it does seem like an urgent task. The sense of what is happening in the world has a gravity, an exhaustion of a current balance. There does seem to be terrific motivation to find renewed relationships. But I also offer a caution: Responsiveness does not necessarily make something sensitive. We walk through a shopping mall and the doors open, don’t they? We clap our hands and the light goes on. These kinds of functions are not profoundly revolutionary. When I dwell on the term responsive, I do not mean a one-way responsiveness where things pick up on what we want and are more sensitive to us. I have a hunger to find a mutual relationship with the environment in order to discover new kinds of balances for the future.

This interview is from the Architecture Australia (Sep/Oct 2012) Dossier on Integrated Design. 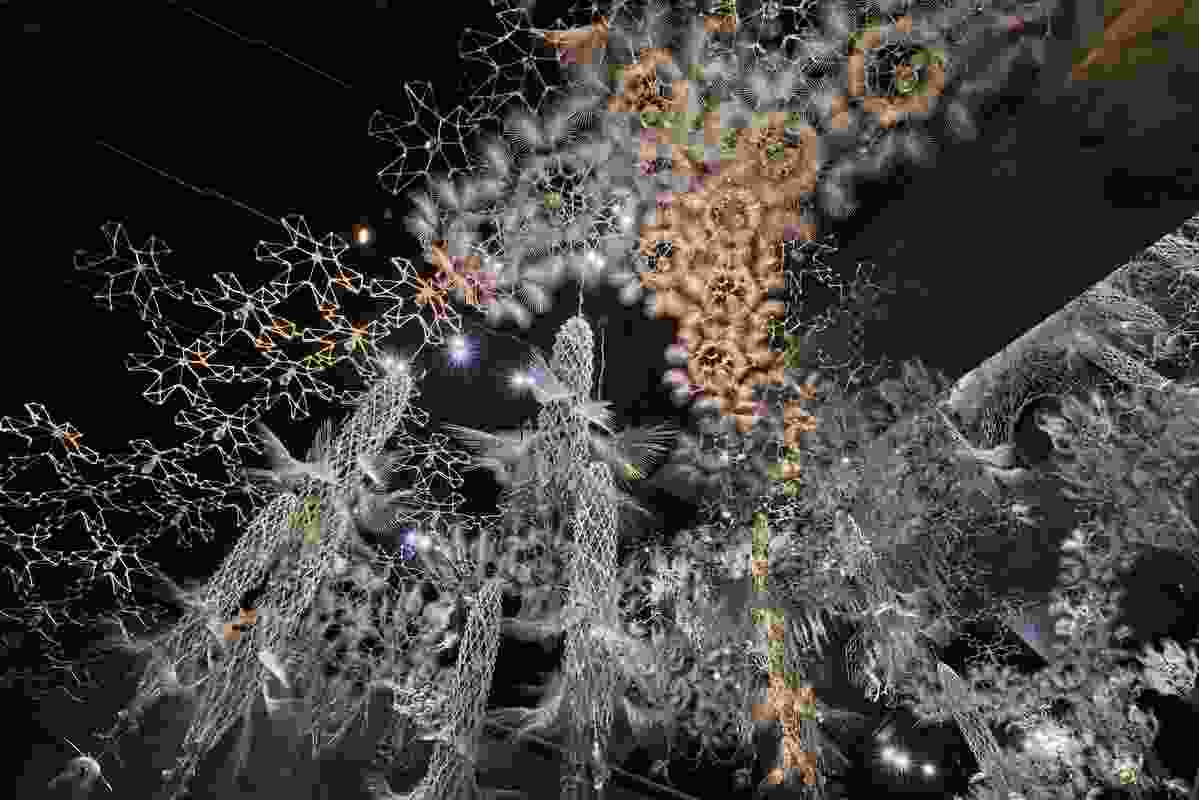 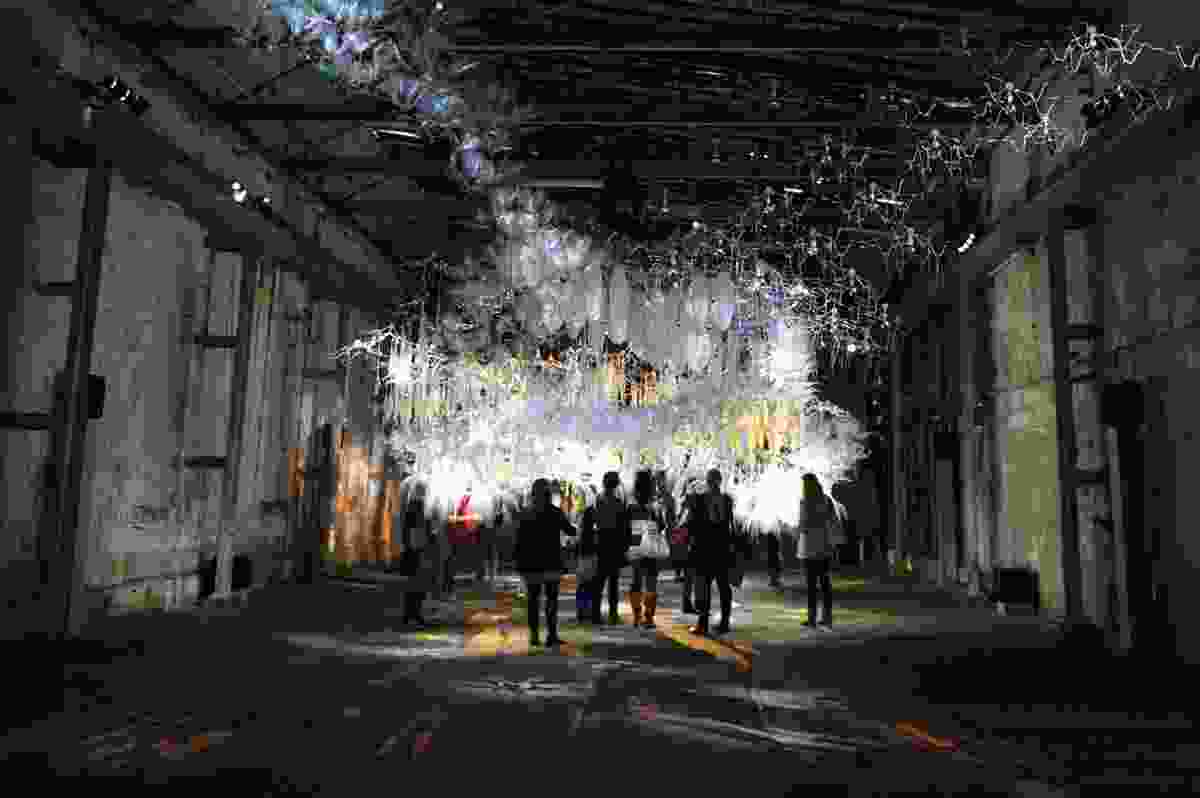 Sybil, an installation by Philip Beesley at the 18th Biennale of Sydney. 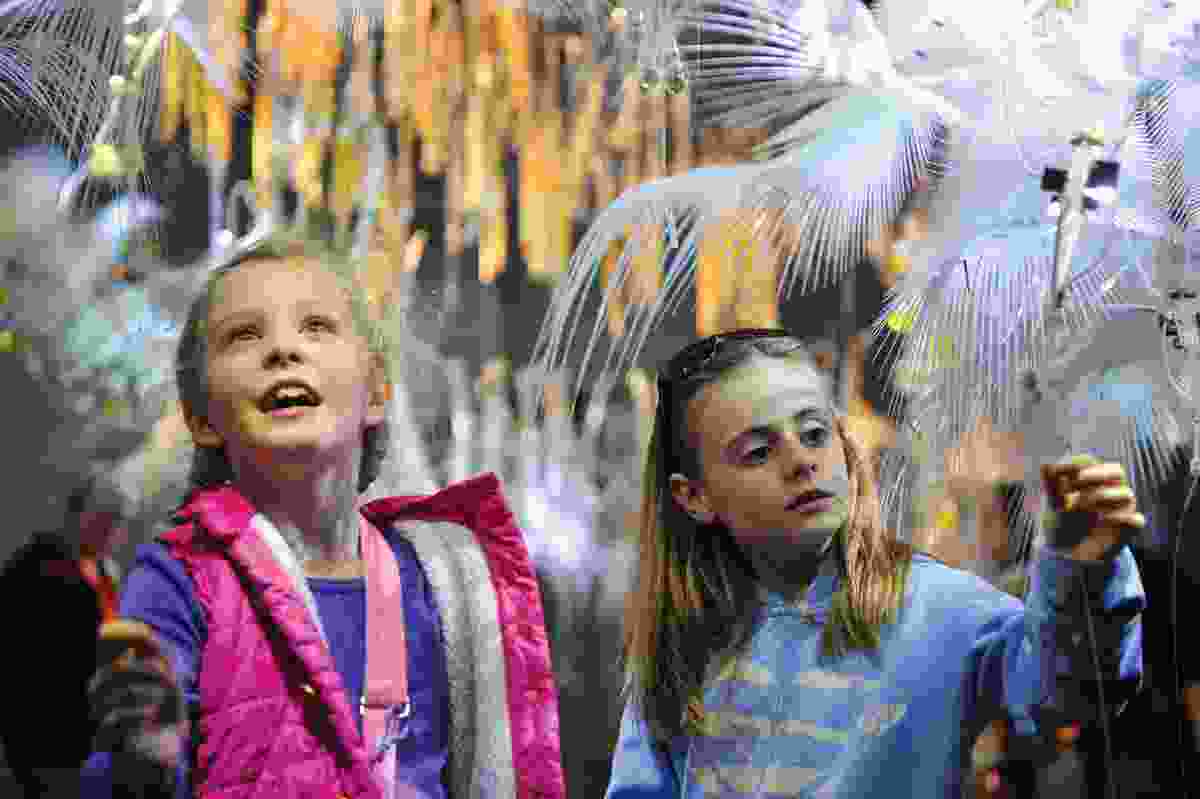 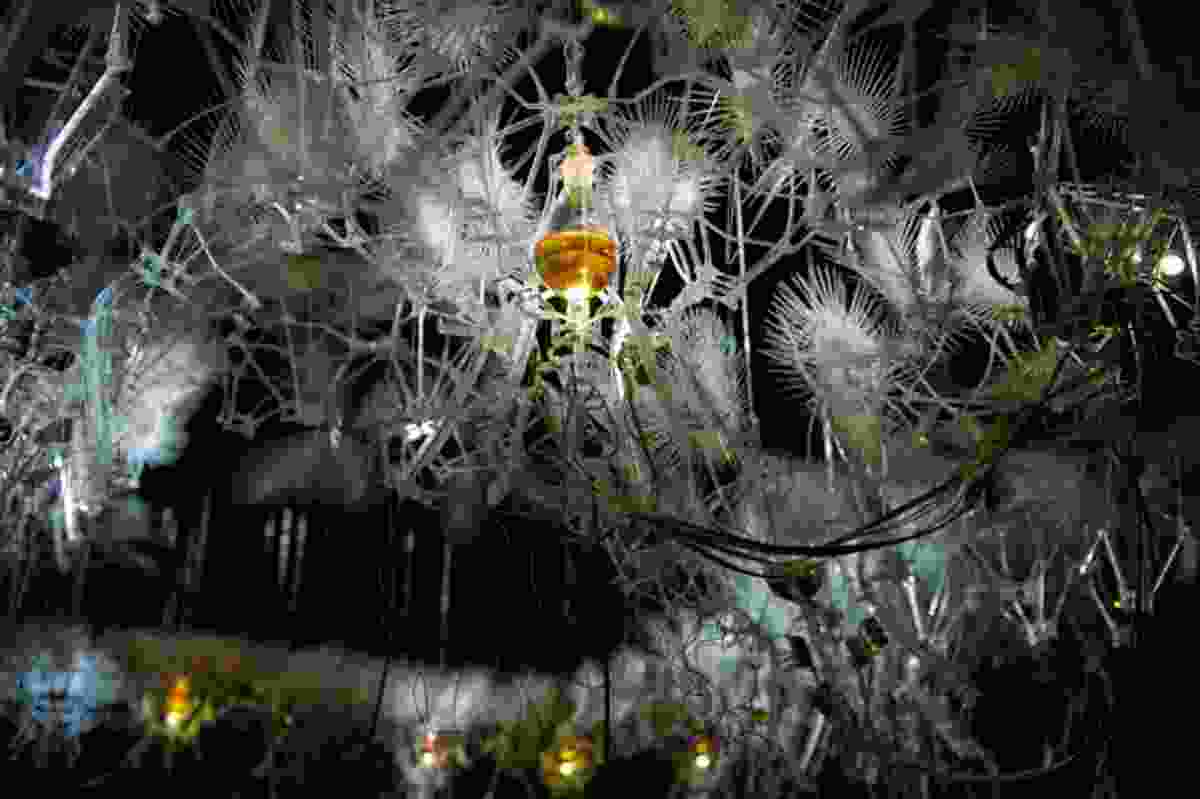 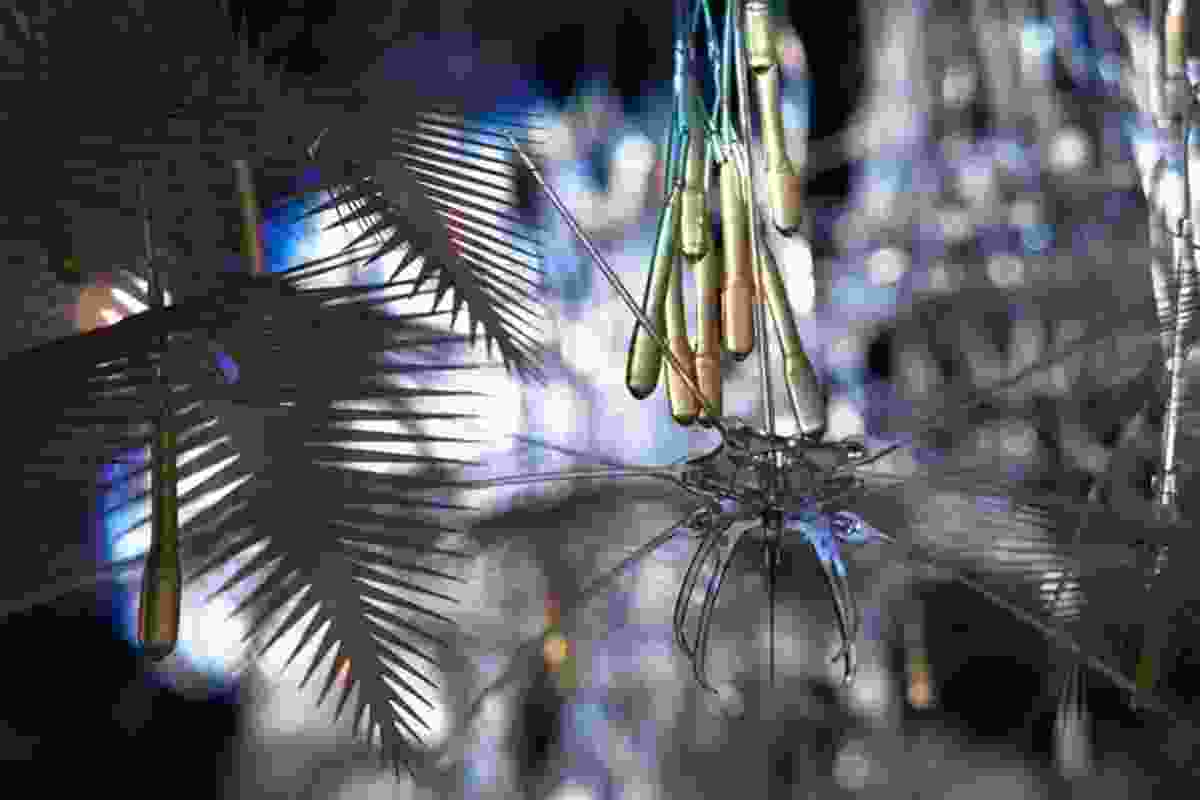 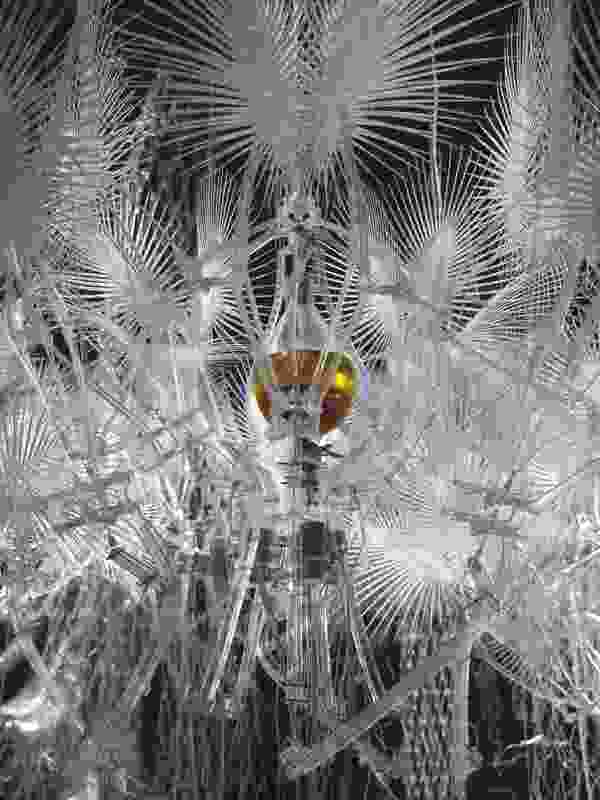