Interlocking spaces connect house and garden in this addition to an 1890s Fremantle home by Philip Stejskal Architecture, allowing occupants to delight in their surrounds.

The new verandah, bathroom, deck and steps create a natural path to the garden.

Bellevue Terrace mediates poetry and pragmatism. Designed by Philip Stejskal Architecture, the alterations and additions to the 1890s duplex tactfully respond to the context of place, seeking to improve connections between the house and garden. The project comprises a narrow, sunken bathroom, an enclosed “verandah” and a series of gradating steps between. Level transitions are softened, divisions between interiority/exteriority are obscured, and qualities of the natural environment are reframed in these spaces, enlivening everyday moments.

The initial brief was to replace the bathroom, deck and pergola that bordered the back of the house with an indoor/outdoor room, to improve access to the garden. The design was prompted by the conditions of the narrow site, including the 1.5-metre floor-level variance between the house and garden and the westerly orientation of the yard. Working closely with his like-minded clients, Philip aimed to respond to both the site and the brief in as few moves as possible.

The “verandah” forms the crux of the architectural response; a boldly articulated steel-framed volume sheathed in white, tempered masonite. This indoor/outdoor dining space appears to float alongside the existing house, reaching towards the garden below. The roof line elevates to optimize northern light, yet recedes to the south to allow neighbours the same privilege. Although the result of a pragmatic motive, this roof contour is refined, extending and coalescing with adjacent forms overhead to loosely define the golden, tallowwood deck.

Numerous folding openings on the north and west facades of the verandah enable occupants to adjust the building envelope in response to seasonal changes, weather changes throughout the day and the level of intimacy desired. The angled planes of these openings are further accentuated by the grooves of the masonite – when closed, the surface appears to feature continuous ridges, and as each opening is activated these ridges are fractured. Flexibility is further increased on the southern facade, which comprises translucent polycarbonate panels that have been face-fixed to a pre-galvanized steel frame. Positioned on a sliding track, these panels can be opened to the adjacent deck, presenting a synergetic threshold. The building envelope is a surface in flux; open to infinite permutations and spatial effects. The verandah acts as a portal between interior and exterior, dependant on the arrangement of openings, sliding panels and folding walls.

The verandah’s interior is lined with marine plywood, complemented by the diffused light of the polycarbonate panels. The plywood surface is interspersed with crisp openings that reveal the lush greenery of the garden beyond. Following the gentle slope of the site, the western fringe of the interior cuts away to a sunken bay window. This lowered plane creates another threshold between inside and outside, while also providing a place of solitude with uninterrupted views to the garden.

Similarly, the sunken bathroom “sliver” is a tranquil space, offering elevated views to the sky and trees. It is positioned to the south, and occupies a space both in and out of the existing home. Although modest in size, it encourages occupants to relate to their environment. The linear volume extends west, culminating in a plinth bath with an opening in the envelope that invites natural views out and gentle breezes in. Externally, the bathroom is clad in tallowwood and appears as an extension of the deck that falls outwards to the garden.

The deck unites the verandah and bathroom, abutting a series of brick terraced levels. Forming a meandering pathway, these levels encourage occupants to slowly descend from the house and take pleasure in the journey to the garden below. The small void created between the house and the path serves as a reminder of the original level change; a juxtaposition of the previously steep and now gradual descent. The terraced path encourages stasis as much as incremental movement and provides varied levels at which to pause, sit and reflect.

Bellevue Terrace concentrates on the essential aspects of site, offering occupants multiple levels of engagement with their environment. The flexibility of the building envelope is such that the nuances of environmental and contextual factors become visible in the architecture. The operable portions flex to accommodate sunlight and breeze, to permit privacy or exposure. The spaces are designed in response to context and continue to operate contextually.

Philip may be a problem-solver, yet this design seems to extend far beyond practical concerns. Bellevue Terrace choreographs space in such a way that simple qualities of our surroundings become affective. Architecture is used as a lens through which to appreciate such qualities – aspects of our environment that are always there, but which are rarely delighted in. 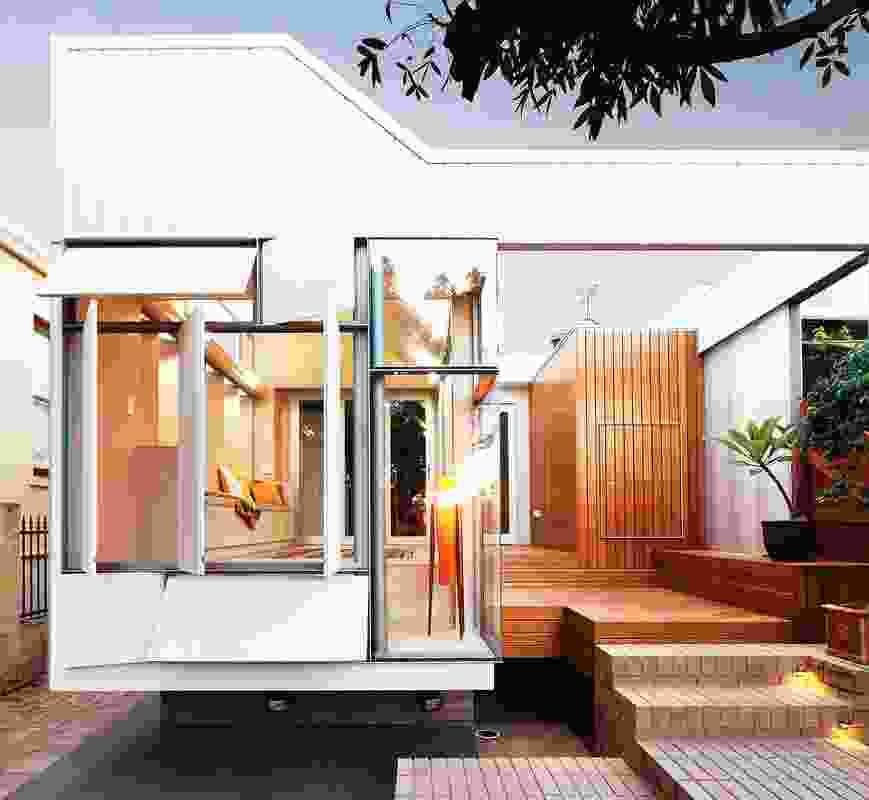 The new verandah, bathroom, deck and steps create a natural path to the garden. 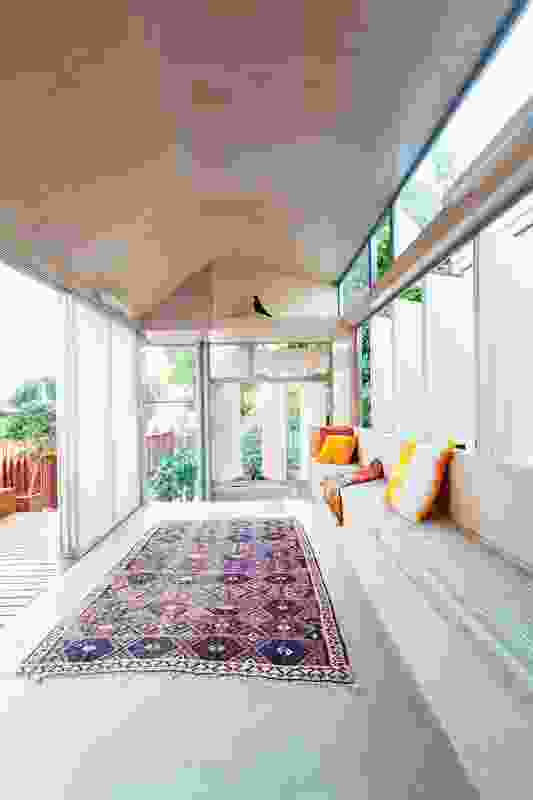 Numerous openings respond to changes in season and weather in the plywood-lined verandah. 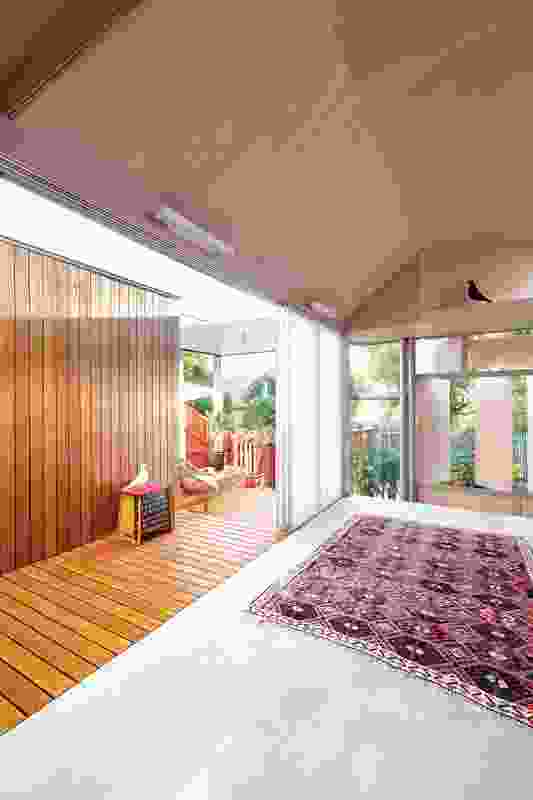 Wrapped in tallowwood, the linear “sliver” bathroom is camouflaged as part of the deck. 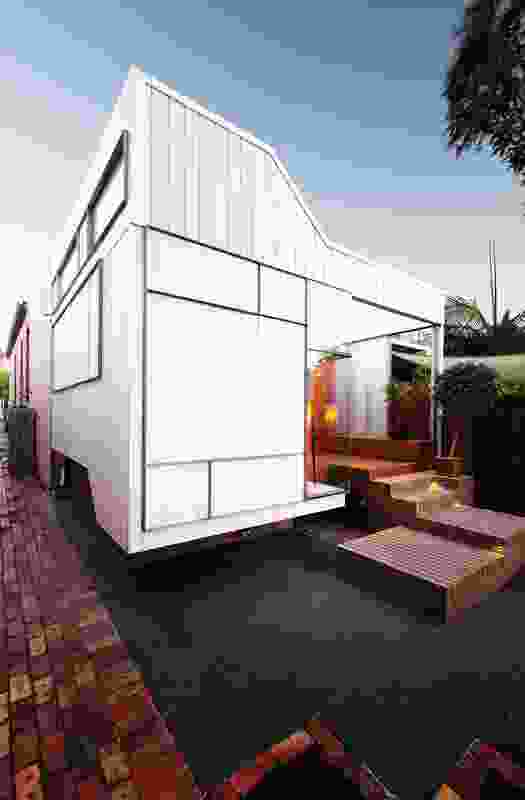 The steel frame, covered in white tempered masonite, seems to float behind the original house. 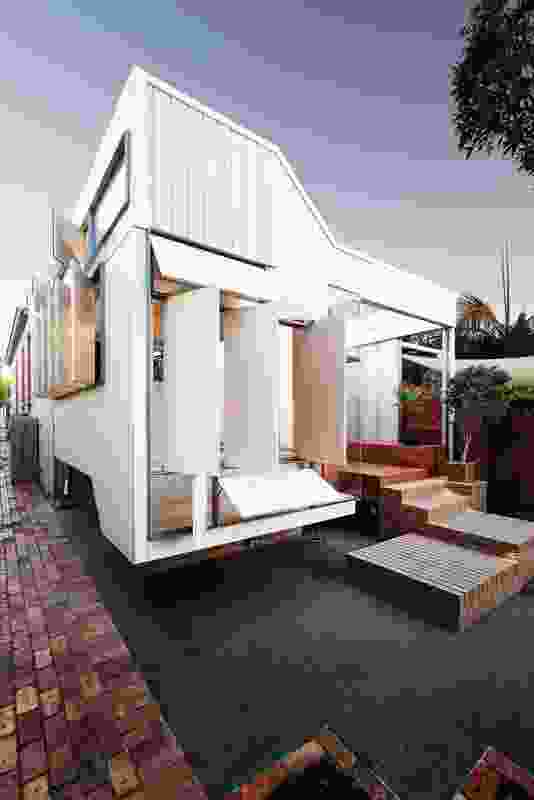