As part of his 2012 Dulux Study Tour, Shaun Carter of Sydney practice Carter Williamson went to the “crazy brave” city of Berlin.

Berlin graffiti can be grim or kooky.

Who works for five years on an urban project, for no fee, to give back to Berliners a swimming pool they once had, then wins an international environmental award worth $100,000 and ploughs it straight back into the project? Realities United did. Amazing. Crazy brave is another way of describing it. That seems to be the Berlin spirit.

We felt this spirit from every architect we met in Berlin. They created their own reality. At first glance, this seemed at odds with an outsider’s view of the place. Berlin is after all simultaneously famous and infamous. But perhaps it is because the city is burdened with so much history that it is emancipated from traditional constraints. I imagine there is a critical moment when the pressure of something becomes so great that it exceeds the mind’s ability to constantly process and comprehend, and simply lets go. Ironically, the constraint liberates.

Berlin was the perfect antedote to the theme parks of Dubai and Abu Dhabi. Here we found ourselves in a fine-grained city of interlocking courtyard housing, with streets formed purely by the buildings that framed them.

The young turks of Berlin were singularly impressive, and their generous undertakings linger in memory. Realities United’s cleansing of the tributary around Museum Island, off the River Spree, provided a 700-metre stretch that can again be enjoyed by locals for swimming. Graft Studio’s heroic “Make it Right” movement done in collaboration with film star Brad Pitt, provides housing to New Orleans residents abandoned by their government, building a new community from designs of 100 of the world’s better known architects. Deadline Architects’ self-funded and self-briefed project that builds their future as an ever-evolving building that is now a fixture on the alternative hotel market, is just extraordinary.

With its wonderful urban environment and flat topography, Berlin is a cyclist’s dream. Cars are neither omnipresent nor dominant, and there is simply no better way to survey the city’s architecture than by bike. Thomas, our guide was the quintessential German architect: tall and thin, precise and detailed. This is why German architects are wanted the world over. The tour could easily have gone for eight hours and still not have been long enough.

The Neues Museum by David Chipperfield, on Museum Island, was and is the antithesis of everything we saw in Dubai. Carefully considered deliberate infill and intervention to remake a museum bombed in World War II. Chipperfield’s detailing at Neues is sublime, from the deliberate use of exposed brick for the new infill walls, which differentiate them from the old, to the extraordinarily detailed cast masonry elements that come together with the military precision of a Swiss watch. No line or alignment has been missed. The spaces seemed perfectly at peace because the eye and brain is at rest within their embrace. For me, the Neues Museum is what architecture can be. No lighting bling or crazed patterning or monumental voids for showing themsleves off. I am still thinking about the Neues today, long after the tour has ended. Special moments like these affect careers.

I had long anticipated Libeskind’s Jewish Museum. It dominated university design classes, media and even replicated itself, in form and imagery at least, on local buildings since it was complete. My expectation wasn’t so much to see the jagged form or detailing, but the story about how the museum was left empty for a year and a half, as the experience of it bare was a solemn and powerful enough memorial to the Holocaust, and to Jews everywhere. Rarely does a building, or anything in life, live up to such high expectations, and the museum didn’t for me. That it followed the Neues Museum didn’t help.

Despite this, there were three significant moments I found exceptional. The forty-nine inclined pillars art installation gives you the distorted feeling one feels when displaced. The dark enclosed space, locked behind a steel door with a sliver of angled light on the bare walls, was – as intended – terrifying. But not overtly. It tapped into an inner knowing about the experience of concentration camps and a darkness of the soul. The genocide exhibit of 10,000 frightened faces, flame-cut in steel discs designed to be walked on, was haunting. Each face in the haunting exhibit seemed real. It took all my energy to walk on the faces. It’s dedicated to the people affected by genocide everywhere, and is is something everyone should experience.

Oddly enough, our guide at the Jewish Museum was perhaps the most comprehensive of our entire tour, in fact, of any tour I have ever taken. His insights, observations and idiosyncrasies were a delight to watch and listen to, and he was a joy to be with. That we stayed at the Campers Hotel (of Campers shoe fame) probably added to our experience of Bohemian, fun and funky Berlin – where a crazy, brave undercurrent runs throughout this fine-grained old city.

See all
Milan Furniture Fair postponed due to coronavirus 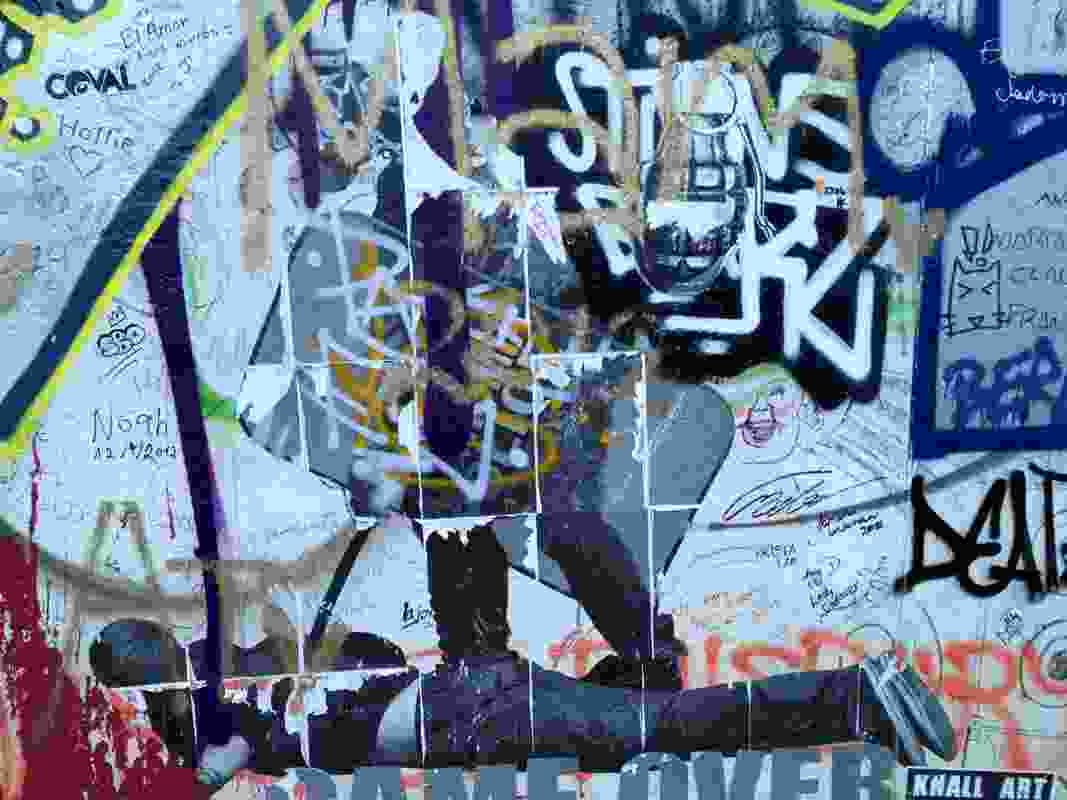 Berlin graffiti can be grim or kooky. 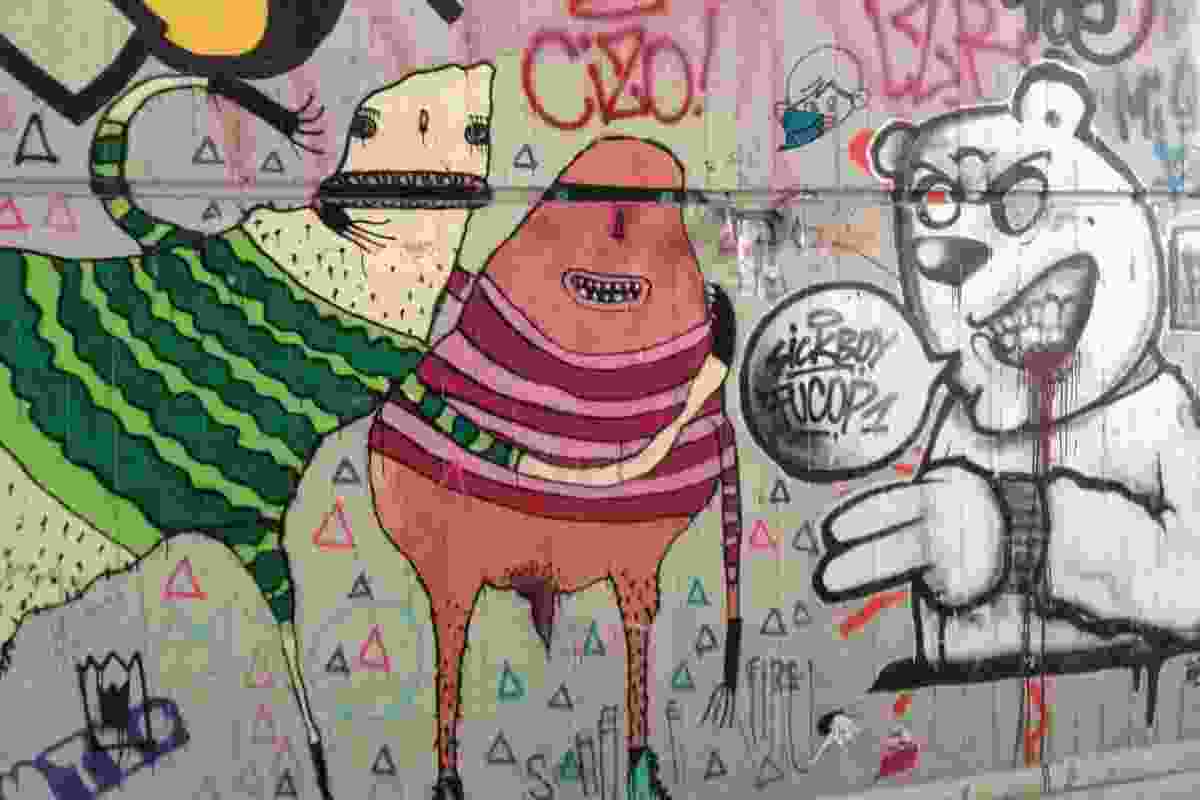 The message above these three street characters is “I love you.” 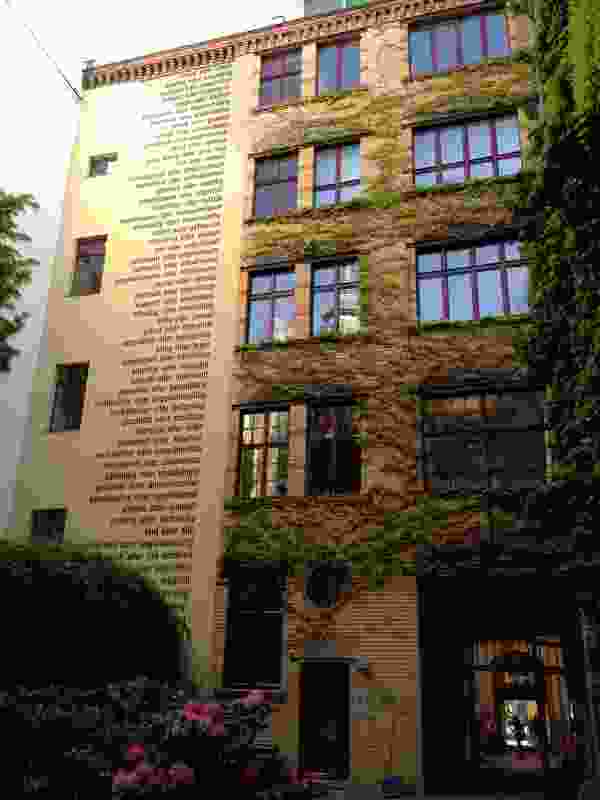 “God is in the detail”: David Chipperfield’s Neues Museum in Berlin.