As part of a larger renewal program, Richards and Spence revitalizes a building along the James Street retail precinct in Brisbane.

Nineteen James by Richards and Spence is one element of the recent development along Brisbane’s James Street. The “signature precinct” was defined during the large renewal program that unfolded in the river-pocketed inner suburbs of Fortitude Valley, New Farm and Teneriffe between the 1990s and early 2000s. In the ensuing years, this program has been consolidated and, more recently, several of the buildings constructed in the first phases have been “freshened” with new finishes, awnings and signage. Nineteen James is of that ilk, but different – the approach to reinvention that the architects have taken here is arguably more refined and deliberate than the neighbouring makeovers.

The intended gains of the new 19 James were multi-fold: more leasable space configured for increased return, a significantly upgraded identity, and a site “repair” that redefines the street and reflects the building’s urban context.

The brief for Richards and Spence was to reinvent the existing tilt-up structure, which was constructed in one of the earliest phases of the precinct project. The intended gains of the new 19 James were multi-fold: more leasable space configured for increased return, a significantly upgraded identity, and a site “repair” that redefines the street and reflects the building’s urban context. The architects admit that the design and production of retail space presented particular challenges. This included pressure to get the project completed by a certain time, because of the pre-commitment of tenants, and the risk-averse nature of developers, who are wary of design elements that might compromise tenants’ interest.

Richards and Spence approached the project proposing to choreograph a set of experiences that effectively interpreted the retail and leasing formulas while creating spaces that were authentic to the place and time. Importantly, as a safeguard against the ticklish fortunes of retail development, they developed strategies that enabled them to inoculate the key design ideas against the “value management” that invariably occurs during construction.

Notable also is that 19 James has been co-developed with the adjacent 15 James (designed by another architect). The two sites are only loosely conjoined and informally connected but are still close enough to create a large assemblage of building that is fully bounded by open space – on two sides by busy James and McLachlan Streets, and on two sides by the open car park shared with buildings deeper inside the urban block. The original placemaking literature described James Street as a precinct of “high street” effects. Admittedly the wide and deep blocks (formerly occupied by light industrial and manufacturing uses) do offer high-street-type pedestrian access, but they are also penetrated by extensive networks of bitumen driveways. These asphalt fingers spread out to become wider rectangles of open car parks that fringe the retail buildings, which were designed to have a “village feel.”

Richards and Spence has used clues from the existing urban environment (such as the tall, evenly spaced palms from the former streetscape) to construct a meaningful pattern of engagement for the James Street tenancies that face directly to the street. The tenancies gain greater permeability as the recognizable urban elements of arcade and laneway cleave into the depths of the building bulk.

Richards and Spence has also distinguished the building through a particular materiality. Perceived as risky at first (it generated some anxiety in the minds of council planners, who felt its aesthetic was too “singular”), the orchestration of white brick as the building’s principal material voice, in concert with concrete, glass and black steel, gives 19 James a metropolitan corporeality that is appropriate to its locale and contemporary ambition. Richards and Spence praises the values of brick, particularly its “familiar modularity,” which lends it an ability to scale down to the body and up to the city.

The understated materials serve as an appropriate backdrop for the stock and trade within, while enabling the building’s overall form to be sharply defined to the street and surrounds. This is accentuated by the concrete awning over the James Street footpath, which is pulled away from the face of the wall so that the full height of the building can be felt by scaling up that street-side experience. Recesses in this building edge, shaped around the four existing palms, also set the sheer height of the building against the finer elements, deliberately defining a gracefully intimate transition court for each of the four street-side tenancies.

A delicate tailoring of detail in black steel and glass defines the space and scale of each tenancy, and reorders the geometric legacy of the original tilt-up building.

The most exposed presentation of 19 James, which is to the north-east, also demonstrates the architect’s idea of perforating the brick wall at the upper level of the street-side facade as integral screening, rather than attaching another layer to the form (which may have been vulnerable to budget trimming).

The south-east building edge, which faces the car park, achieves a kind of articulated interface between city, car, person and architecture. The form hooks passing foot traffic in from James Street beneath a high, deep canopy recess, which acts as a single awning to the tenancies below, while its upstand conceals the roofline. The space also mutes the banality of adjacent off-street parking space, allowing cars to nudge in beneath to meet a colonnade of slender black columns. A delicate tailoring of detail in black steel and glass defines the space and scale of each tenancy, and reorders the geometric legacy of the original tilt-up building.

The building is opened across its depth by a narrow arcade, which flows parallel to James Street and pools midway in a modest atrium. The arcade offers an address to the upper commercial tenancies and further connects to the “unbriefed space” – a laneway running along the north-west edge of the building, between 15 and 19 James Street. A low, concrete roof shelters this space contingently; openings have been cut out to enable light to collect and landscape to push up through. A cafe opens its corner space wide onto this edge, its glazed sliding walls pulled back along customized channels set in the outlines of black steel frames. The laneway also underscores the urban intentions of the architects as it creates human interest via a long vista across James Street, through to Wandoo Street to the north-east.

The transformation of 19 James has redefined this retail territory, offering sensory architecture with highly considered formal and material definition and spatial connection. Through an agenda of refurbishment and addition, Richards and Spence has consolidated and articulated this urban block according to a thoughtful propriety that successfully addresses the retail, commercial and hospitality needs of its owners and occupants. The shallow effects of the former building have been replaced by a coherent and intelligent urban presence that makes so much more of its location. 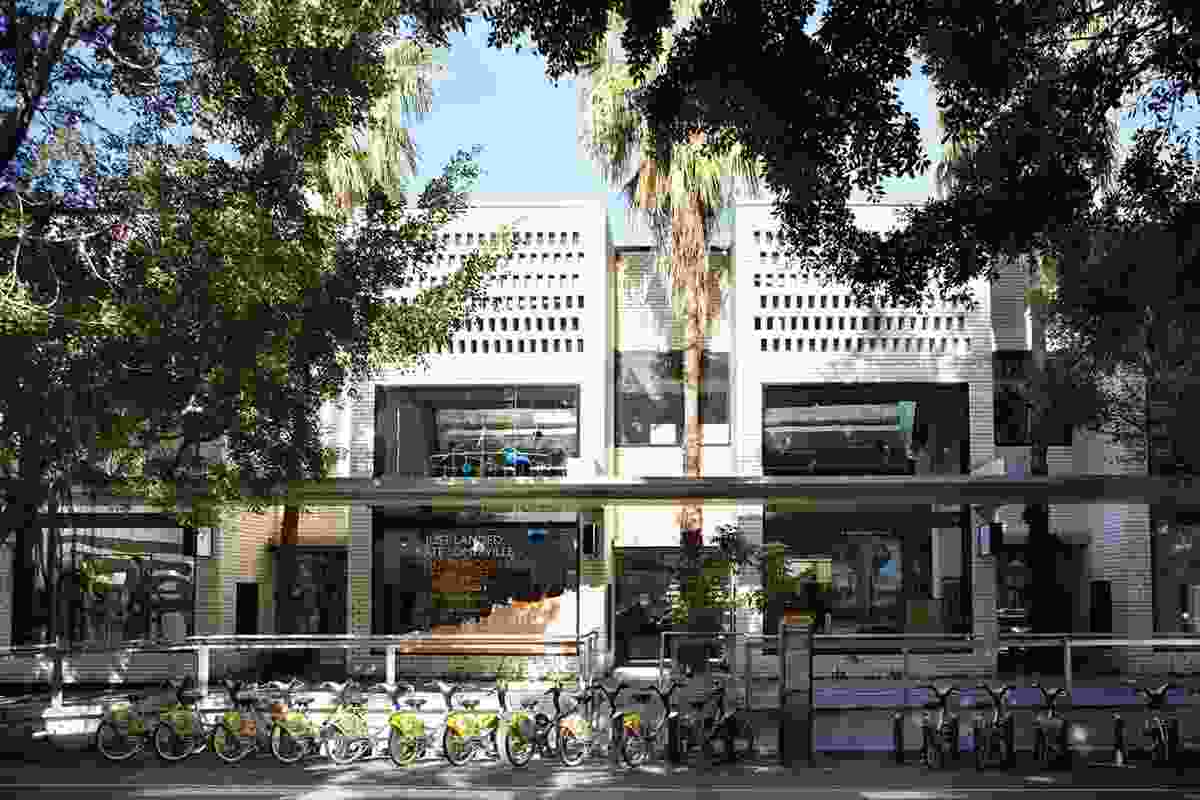 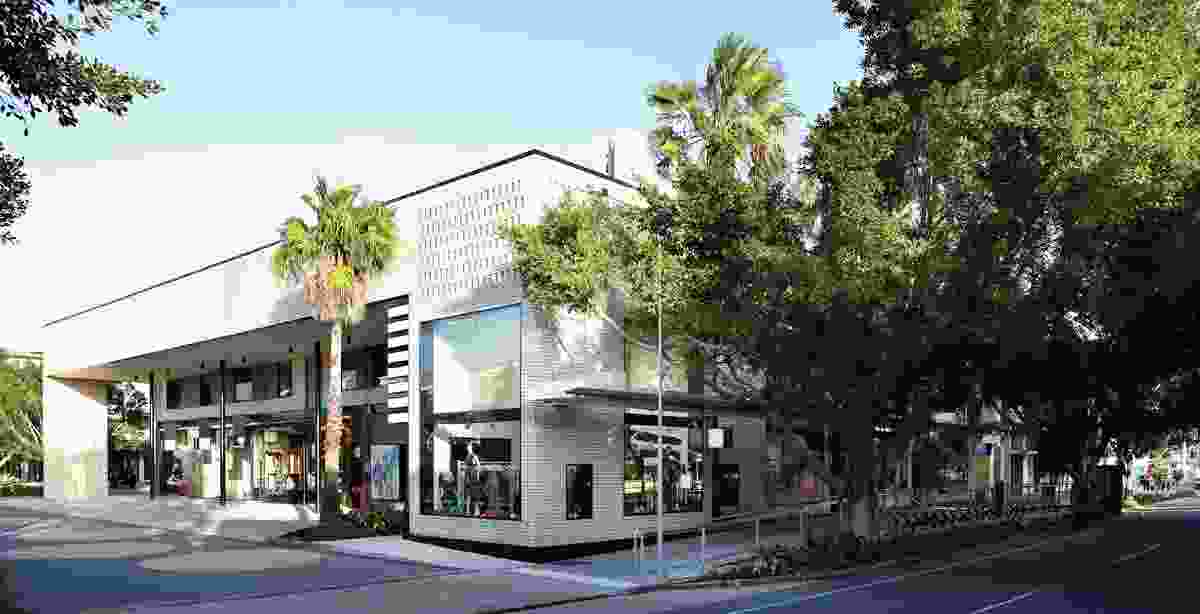 The south-eastern corner hooks passing foot traffic into the block. 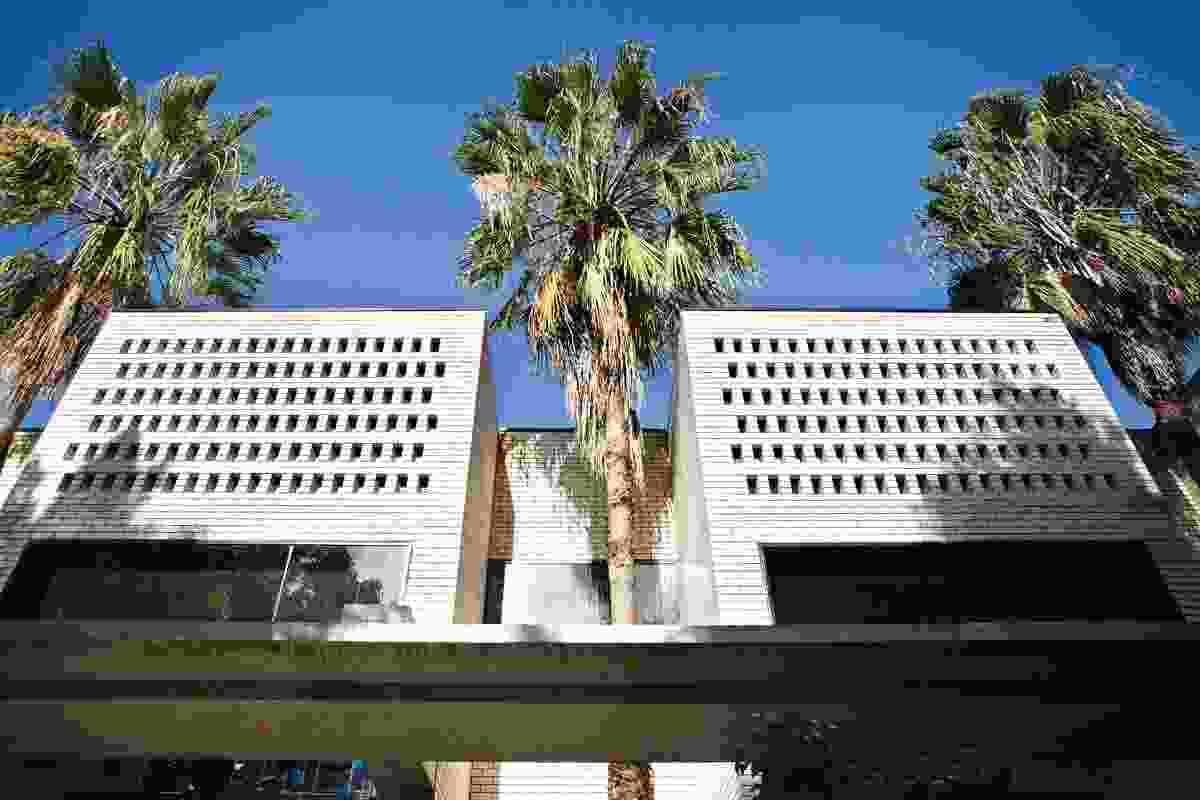 The new building envelope incorporates existing trees from the streetscape. 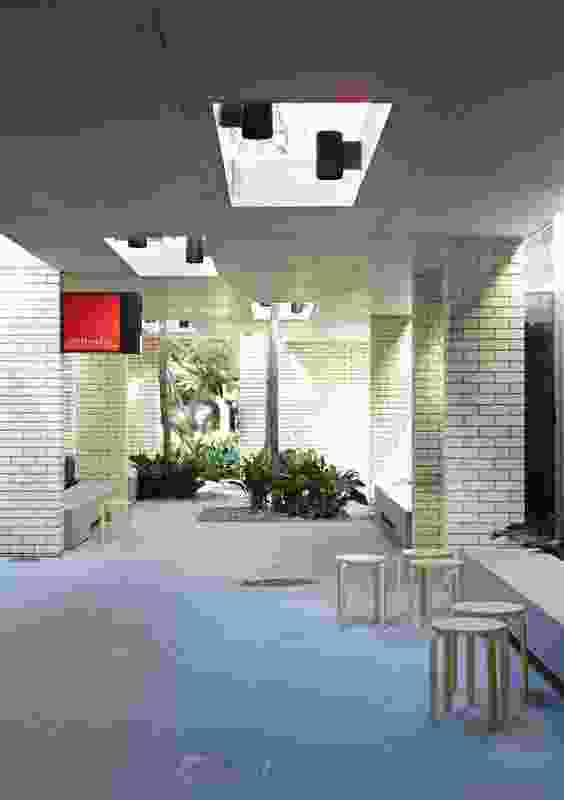 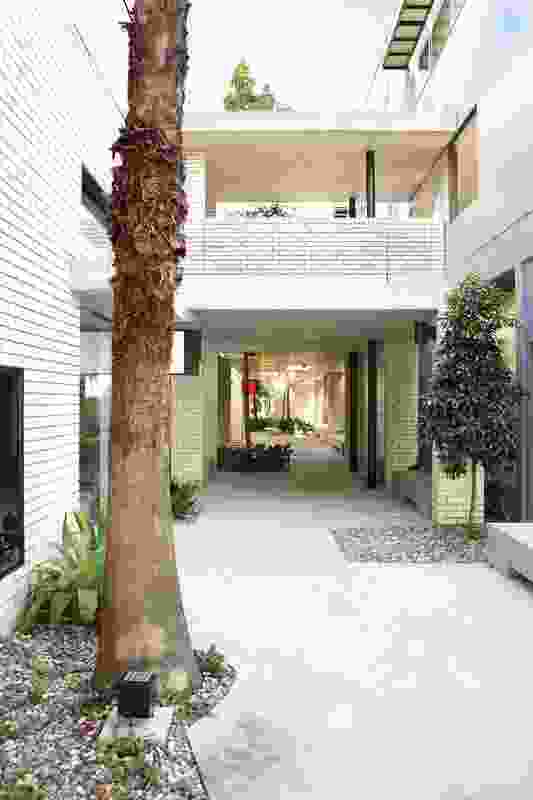 Openings in the concrete roof allow trees to grow up and light to filter in. 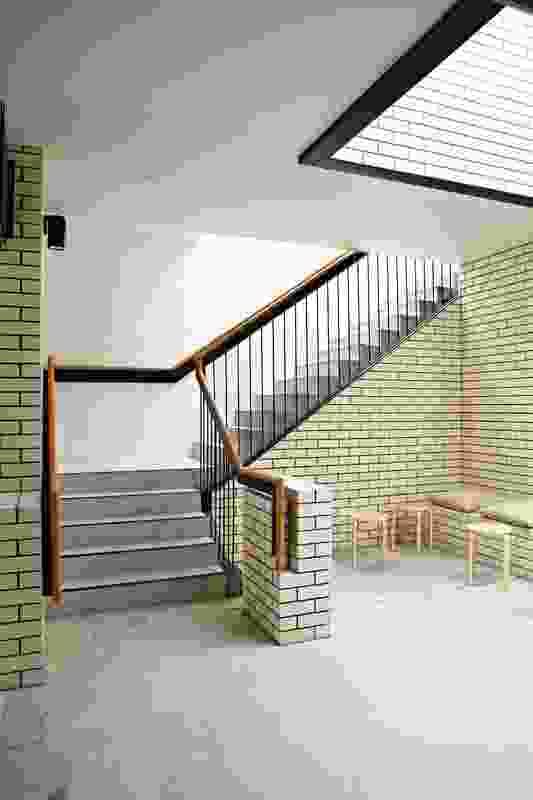 The arcade, which leads to an atrium. 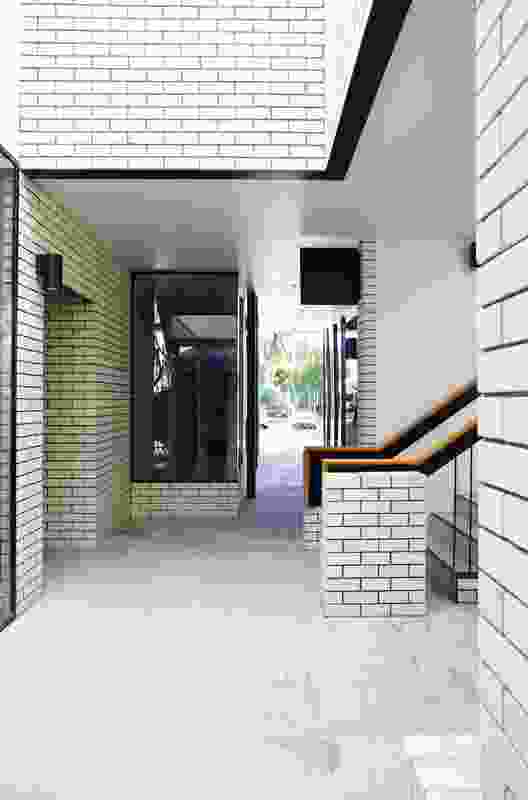 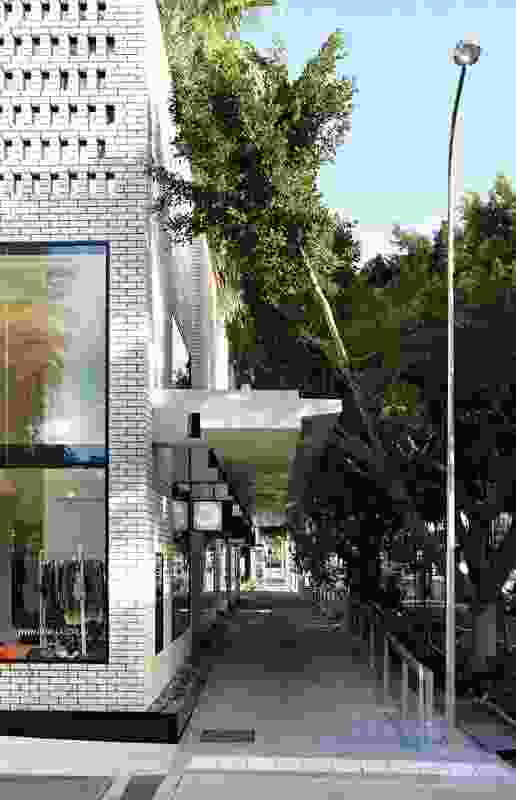 The urban presence is strengthened by a defined street edge.