This coastal retreat by Neeson Murcutt Architects is as much about the garden as it is the house, and in turn, it is in picturesque harmony with its coastal bushland setting.

Vertical sun blades, in a fun palette of foliage-inspired colours, draw the garden into the fabric of the building.

The Blue House by Neeson Murcutt Architects is located in Victoria’s Sorrento, a short walk from the water’s edge through sandy scrub. One of a suite of three dwellings housing an intimate family grouping on a large but full and undulating site, the Blue House is an unassuming monument to the lesser and greater joys of dwelling, wrapped in a considered and articulated skin.

This is the second house that Neeson Murcutt Architects has designed for the site. The first house – Zac’s House, finished in 2009 – hunkers down into the landscape with heavy masonry walls anchoring it firmly to the ground. Zac’s House was an attempt to create a more generic kind of dwelling, seen by the designers as a project that tested a model for compact living. By contrast, the bespoke and largely lightweight form of the Blue House sits proud in the landscape, even while following the site’s contours. This offers a raised platform for viewing and surveying the remarkable surrounding garden, which was expertly designed by Fiona Brokhoff Design.

It is not a large dwelling and the diagram of the house’s two-bedroom plan is very simple. A central living space follows the contours over two cascading levels, and is flanked by smaller rooms on opposing sides. One side contains the guest bedroom, bathroom, kitchen and laundry; the other side contains the main suite, the study and the lounge room. On the south-western end of the living space, a high glazed wall allows uninterrupted views of the sky. On the north-eastern end, the living space spills out onto a deep, shaded verandah, from which the occupants have a commanding view of the delightful garden. The open-ended nature of the living space, combined with the high ceiling, contributes to the feeling of airy spaciousness in the house.

The Blue House was designed for a client who didn’t like the colour white, and it gets its name from the internal wall colour, an eggshell blue on tongue-and-groove boards; but before you experience the interior, you see the house in the landscape. The general cladding is a flat grey finish, a compressed fibre cement sheet fixed with expressed joints, factory treated to prevent water penetration. This cladding picks up on the silver colour in some of the garden’s foliage, typical in particular of the underside of the leaves of some coastal native species.

Vertical aluminium sun blades fixed in sliding panels are finished in a varying palette of foliage-inspired colours, drawing the garden into the fabric of the building and anchoring the building in its setting. The movement of sunlight over these blades creates an optical effect, expanding the basic palette with additional reflected and shaded colours from across the spectrum. This is a design that uses colour sparingly, but to great effect.

Within the house, in addition to the painted tongue-and-groove walls, the ceiling is an exposed timber structure. It is punctuated with triangular clerestories that bring light in from surprising angles, animating the space in different ways as the day progresses. It is clear that the designers thought carefully about the interior as a series of discrete rooms, and they have articulated the skin of the building, walls and roof, to play with sunlight in a way that defines those rooms. To a large extent, the exterior is conceived as a consequence of interior moves, which have been made with confident charm. This can be contrasted with an approach that would seek to make a strong formal statement with the exterior, relegating internal spaces to being merely a consequence of the exterior form.

The Blue House was designed as a coastal retreat – not at all what you might see in the city but something more relaxed, with a looser tone. In fact, so much of this project is about carefully modulated tone: tonal and gradated colour shifts, tonal atmospheric shifts illuminated by varying sunlight, and tonal forms and colours contrasting with and drawing from the landscape garden setting.

Getting the tone right – a difficult process that is explicitly or implicitly central to the making of any house – starts here not with heroic architecture, but with the garden landscape. The structure of the garden is held together by a clear sculpted spatiality, from the rear pool terrace, through the house to the framed lawn out the front. Wind-swept tea-trees and other native species put flesh on the bones of this structure and lend their colouring and patterning to the visible surface of the home.

The Blue House, a house in a garden, is comprised of architecture posed as an equal partner in the making of a place. The house neither retreats from nor dominates the garden setting, and there is a strong sense of symbiosis between garden and house. Curiously, there is a comfortable inevitability about the design of the house; the resulting place, the sum of house and garden, is in picturesque harmony with the broader coastal bushland setting.

Vertical sun blades, in a fun palette of foliage-inspired colours, draw the garden into the fabric of the building. 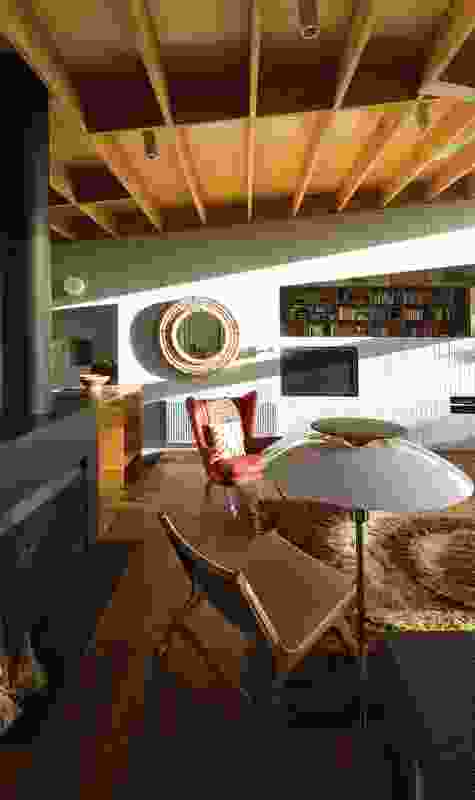 Sunlight enters the house at surprising angles, animating the interior in different ways as the day progresses. 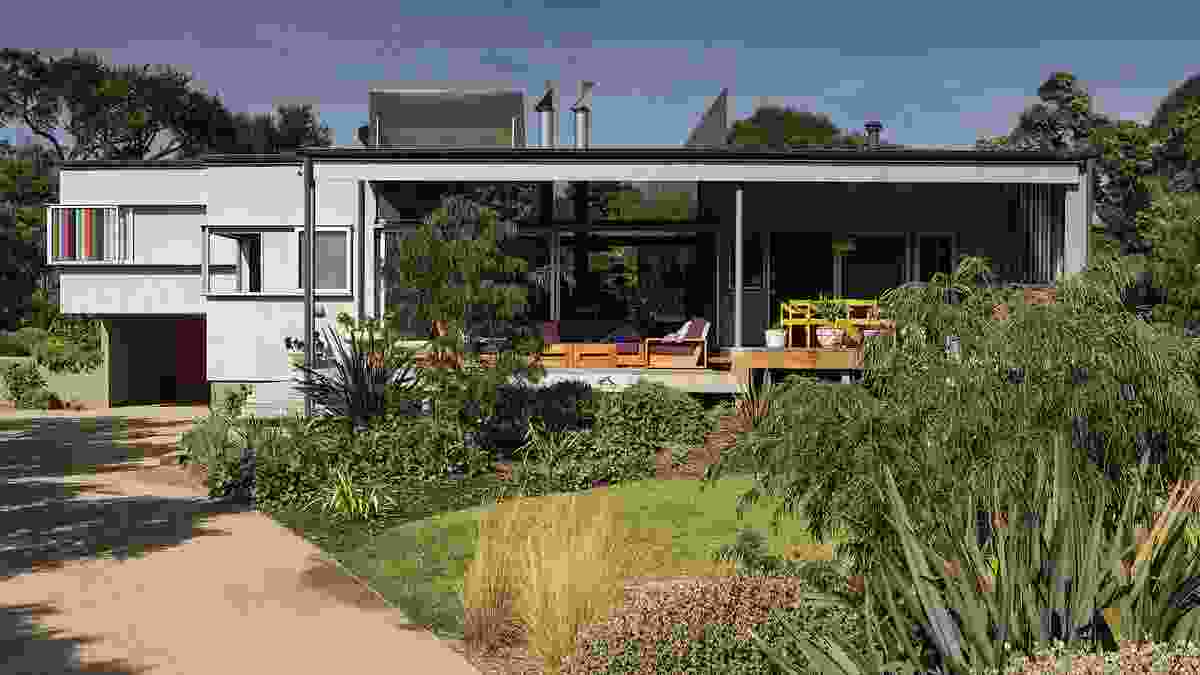 At the north-eastern end of the living zone, the space spills onto a deep, shaded verandah with views over the garden.

The house neither retreats from nor dominates the garden setting – there is a strong symbiosis between the two.

Located on a large but full and undulating site, the house is a monument to the joys of dwelling. 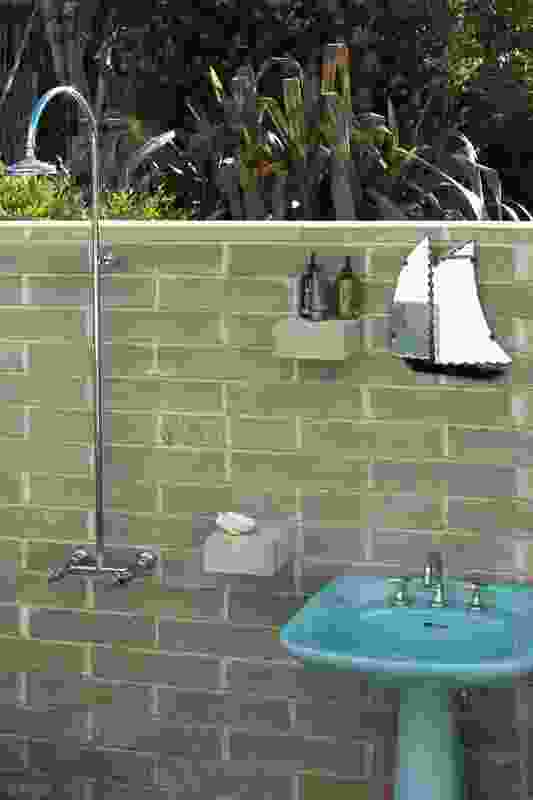 An outdoor shower provides an opportunity to further connect with the home’s natural setting. 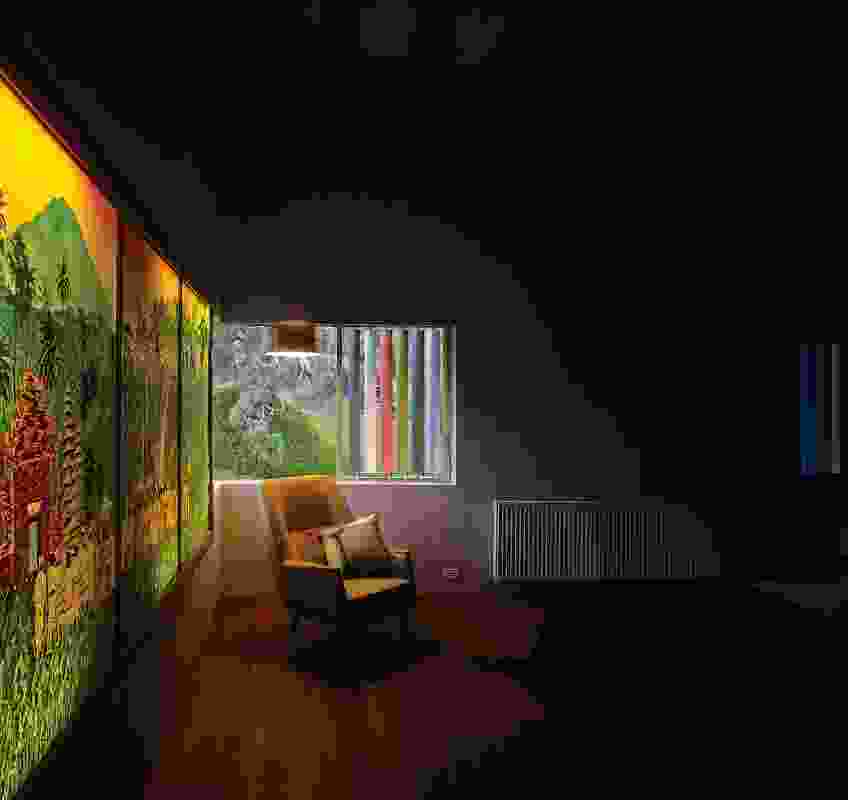 Colour is used sparingly but to great effect – sunlight across the vertical blades expands the basic palette with reflected and shaded colours. Artwork: Carlos de Goyeneche. 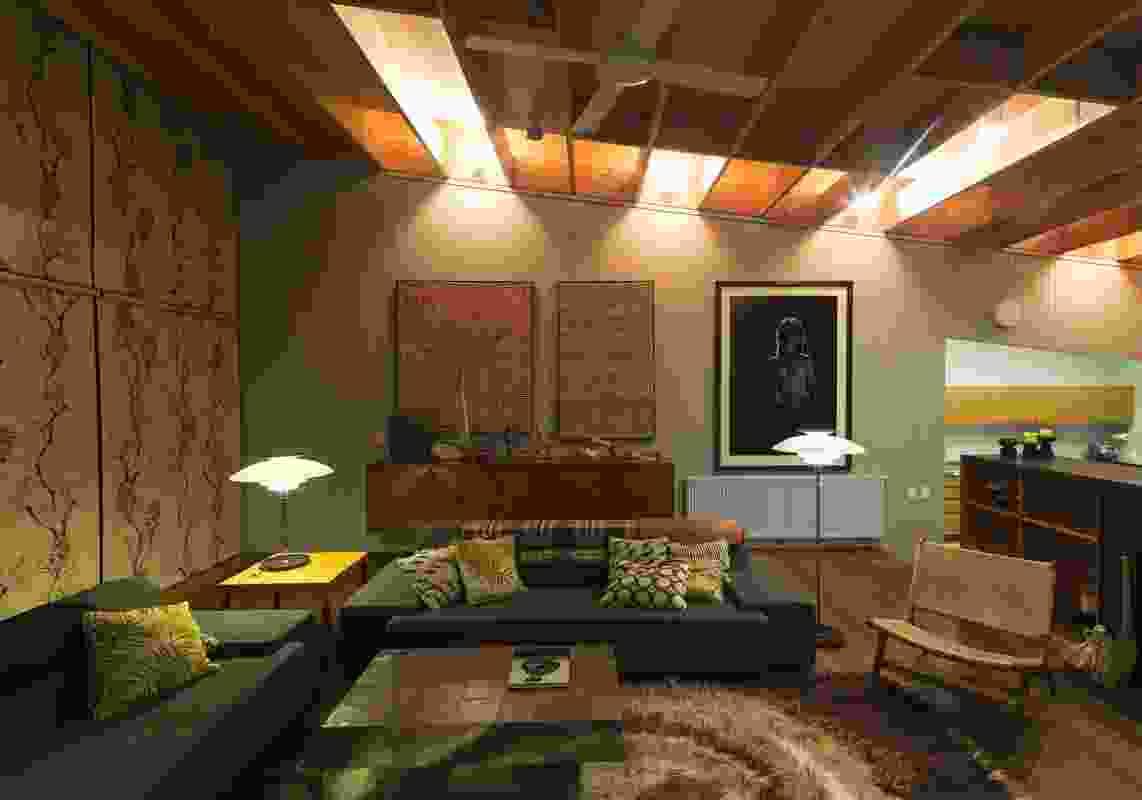 To a large extent, the exterior is conceived as a consequence of interior moves, which have been made with confident charm. 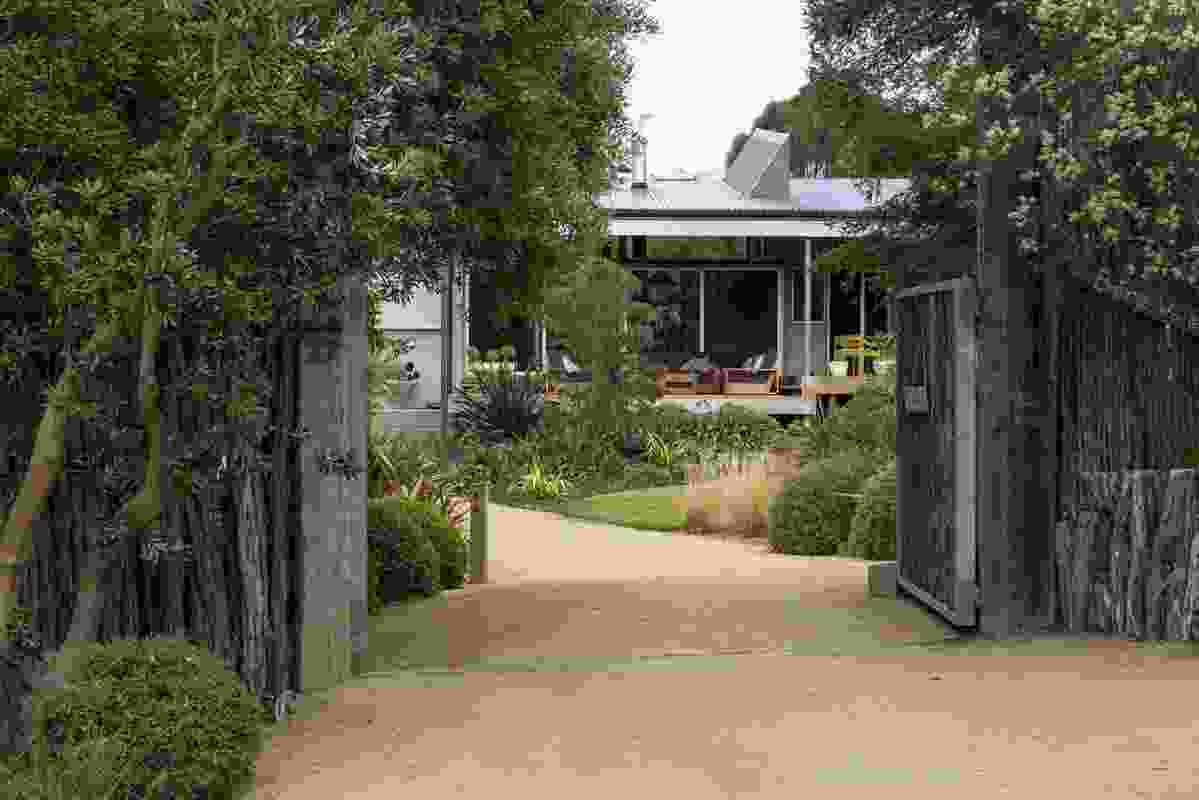 The Blue House was designed as a coastal retreat – not at all what you might see in the city but something more relaxed, with a looser tone. 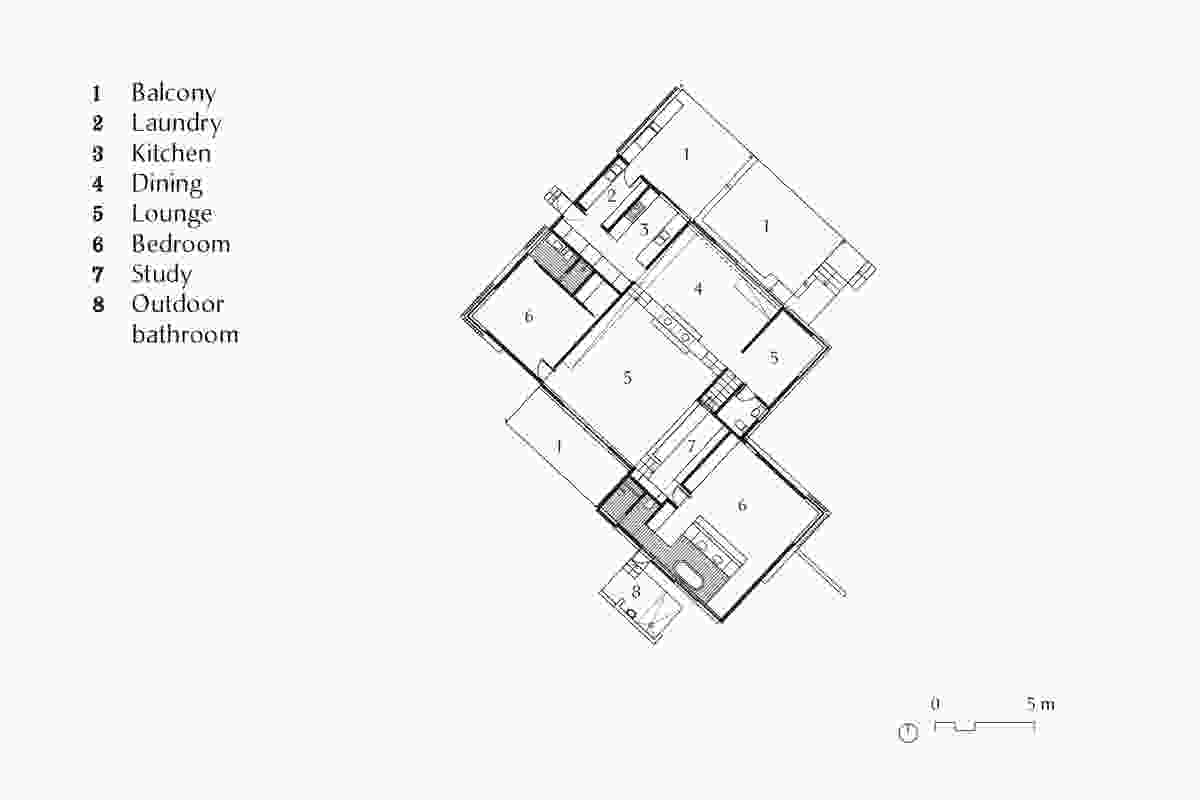