A design competition at Brisbane Airport heralds an urban paradigm beyond the rhetoric of Aerotropolis.

Airports today are not what they used to be, thank goodness. Unlike train stations, whose grandiose built form expressed national pride from their earliest days, most airports around the world began life as invisible utilitarian hangars stuck somewhere in the sticks. The war effort gave many of them a boost, improving their capacity (including Brisbane’s), but it wasn’t until the 1950s that the age of the airport finally arrived, when a booming economy and cheaper tickets created an explosion in commercial travel.

Half a century later, airports are now accepted as the number one gateway to other destinations. Although the rhetoric has ebbed since the late 1990s, for a time architects got very excited by this new symbolic role. The “airport as future city” brought us visions of a radical new urban condition, embodying contemporary characteristics such as rapid change, globalized networks and ubiquitous technology. Shimmering new airports by Foster, Piano and Calatrava declared to the world a sense of confidence, entitlement even. Airports, we were told, held the secret to a future we would all soon live – one of nomadic, networked lives, where we could work and live anywhere and everywhere.

Unfortunately, however, as Marc Augé observed in his book Non-places: An Introduction to Supermodernity, being anywhere can also feel like being nowhere, so thankfully this futurist vision did not transpire. Instead, it became clear that the traditional city still had a few things to teach the precocious airport. Instead of iconic buildings sitting aloof and disconnected from their ground level, airports learned the importance of the ground level: roads, parks and open public spaces. Instead of morphing into a vague international identity, airports embraced the power of regional identity, which attracts both tourism and business. Instead of looking exclusively to global corporate business, airports reconsidered their connections to nearby suburbs and neighbouring business.

This new airport paradigm informed BNE: Making Connections, a recent Property Master Plan (PMP) competition for Brisbane Airport. Brisbane, like all Australian airports, is required by the Federal Aviation Act to revise and update its master plan every five years. Although the master plan is made of many parts, some highly technical, the property component (governing such matters as land use, connectivity and public domain) is a vital component; all the more so given the distinct urban qualities that make Brisbane Airport unique within Australia.

For a start, it’s huge. At 2,700 hectares it is almost three times larger than Sydney Airport. While this represents a unique development opportunity, it also makes local ground-level connectivity a challenge. Being nine kilometres from the city it’s also the easiest Australian airport to access, but this proximity makes noise abatement and environmental management vitally important for safeguarding its future 24/7 operations. Last but not least, the fact that the airport is in south-east Queensland means that there is the logistical responsibility of supporting one of the nation’s fastest-growing areas in terms of both population and commerce. This points to the airport’s importance at both the local and regional scales. This role is augmented by the airport’s unique proximity to major rail, road and port infrastructure. In short, this PMP is not just a federal requirement – it is a vital strategic tool for understanding what the airport is going to be in the decades ahead.

The competition started with an inclusively framed expression of interest (EOI) that had an emphasis on strong cross-disciplinary capability. Given the complexity of the challenge, combining elements such as built form, commercial property development, environmental management and transport infrastructure, a collaborative approach utilizing diverse expertise was clearly required.

Three teams were selected from this EOI: ARM with Arkhefield and Rush Wright Associates; Grimshaw Architects with AECOM, PWC and Tract; and Shane Thompson Architects (STA) with Wilkinson Eyre Architects and Lat27.

Given the airport’s vast scale, one common design challenge identified by all the submissions was the need to intensify and consolidate development while also enriching the connectivity between the current and future elements with a purposeful public realm. Essentially this means providing a meaningful sense of place between the variety of buildings rather than simply within the interiors of the various facilities.

The ARM/Arkhefield submission proposed a new Moreton Boulevard, concentrating development between the domestic terminal at one end and Cloud Park (a large cultural park) at the other. While this represented an exciting and bold urban statement, the jury was uncertain of the viability of the park’s major cultural profile, along with the significant cost of additional infrastructure required. There was great support for the proposal’s clear division of commercial, industrial and terminal zones, which was seen as a positive rationalizing of the current multiple precincts. The jury also commended the proposal’s strengthening and consolidation of the airport’s south-east with a new Brisbane Parkway.

The STA/Wilkinson Eyre/Lat27 proposal represented an exciting vision of an airport with unique natural attributes. The airport’s estuarine landscape was envisioned as a strong place-making component, supporting the development of a range of urban villages. To a large extent this proposal positively built on the existing framework of the current master plan; however, the jury was concerned that the urban form needed greater definition and further development. The proposal was particularly commended for both its robust commercial analysis and its strong environmental and ecological ambition.

On balance the jury considered the Grimshaw Architects/AECOM/PWC/Tract proposal to have the most promise, in its concentration of development in a number of subtly consolidated zones, including a proposed “airport spine” between the terminals and retail/commercial precinct or “airport village.” While the viability of some recommendations required careful analysis, such as additional public transport infrastructure, this scheme was considered to have struck a convincing balance between commercial opportunity, flexible planning and high-quality public domain. The jury was also excited by the proposal’s creative approach to natural systems and its rethinking of the connections between energy consumption, production and waste management. This was seen as consistent with and parallel to an appropriate level of land-banking for future consideration. The scheme’s ability to transcend current and future generations was seen to provide a level of adaptability that will help deliver positive development outcomes for Brisbane Airport.

Taken together, the Grimshaw Architects/AECOM/PWC/Tract submission was considered a worthy winner, representing an exciting prospect for the airport’s future, both in the short and long term. The winning team will now be commissioned to complete the Property Master Plan, including sketch design of a catalyst site yet to be determined. 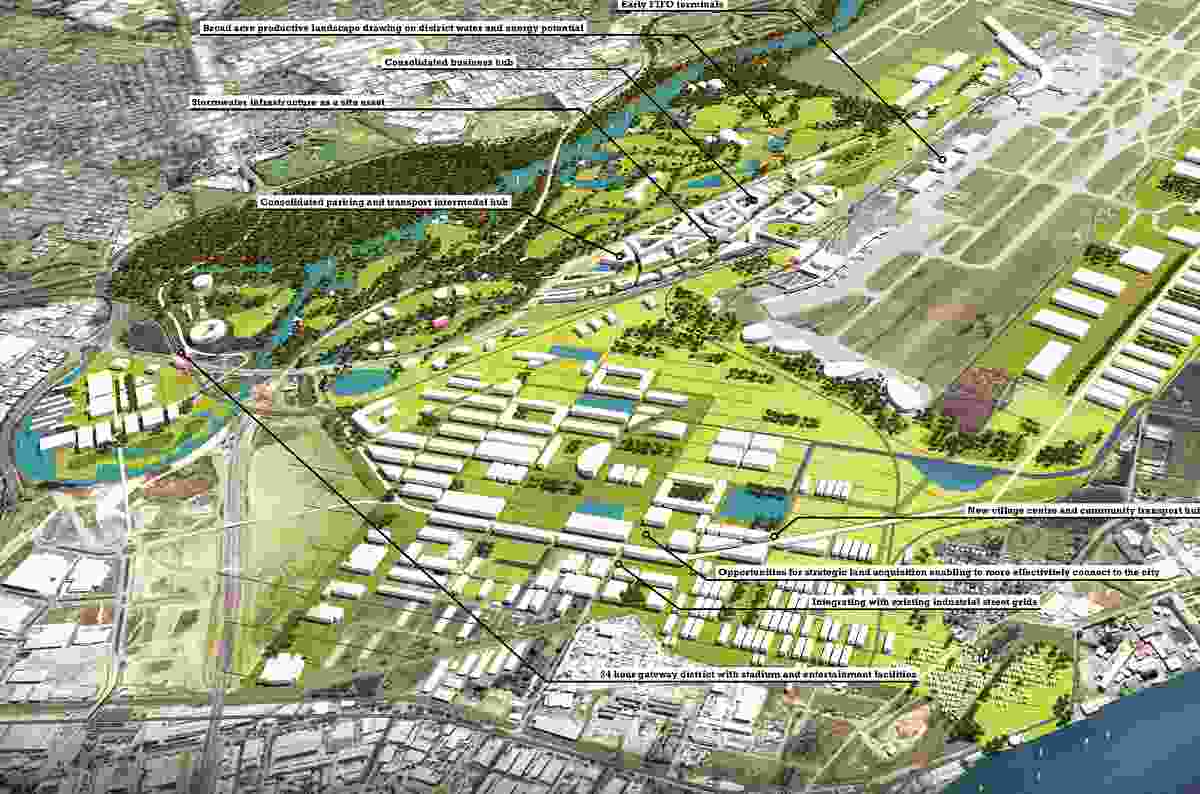 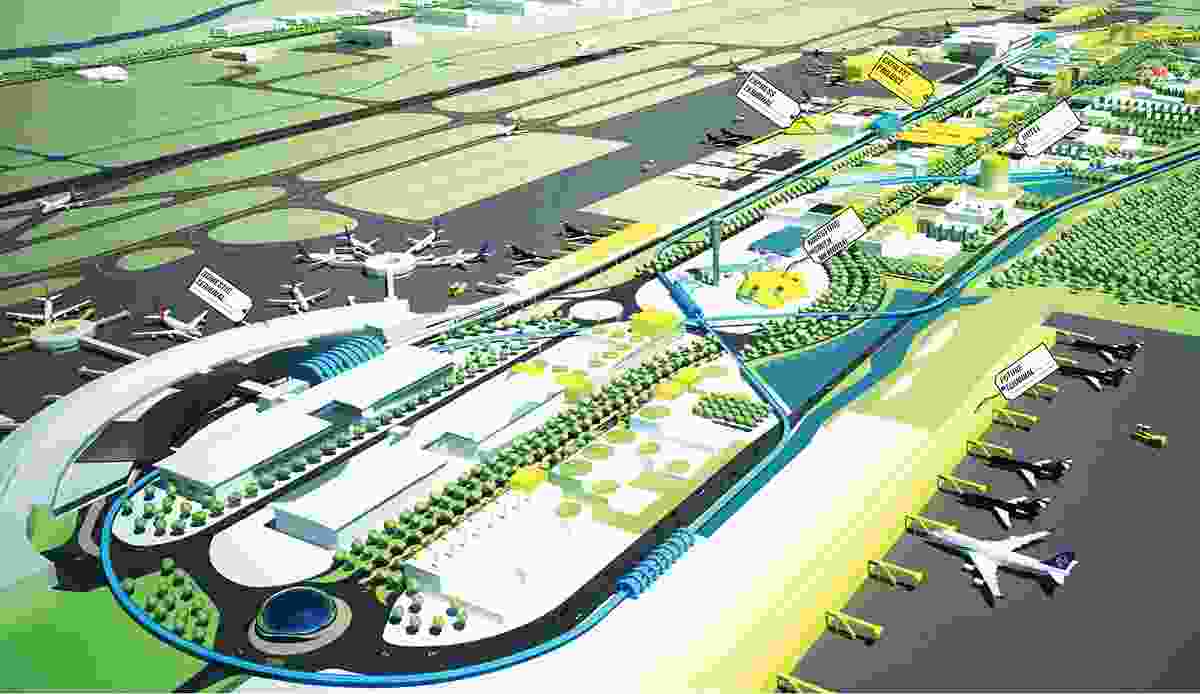 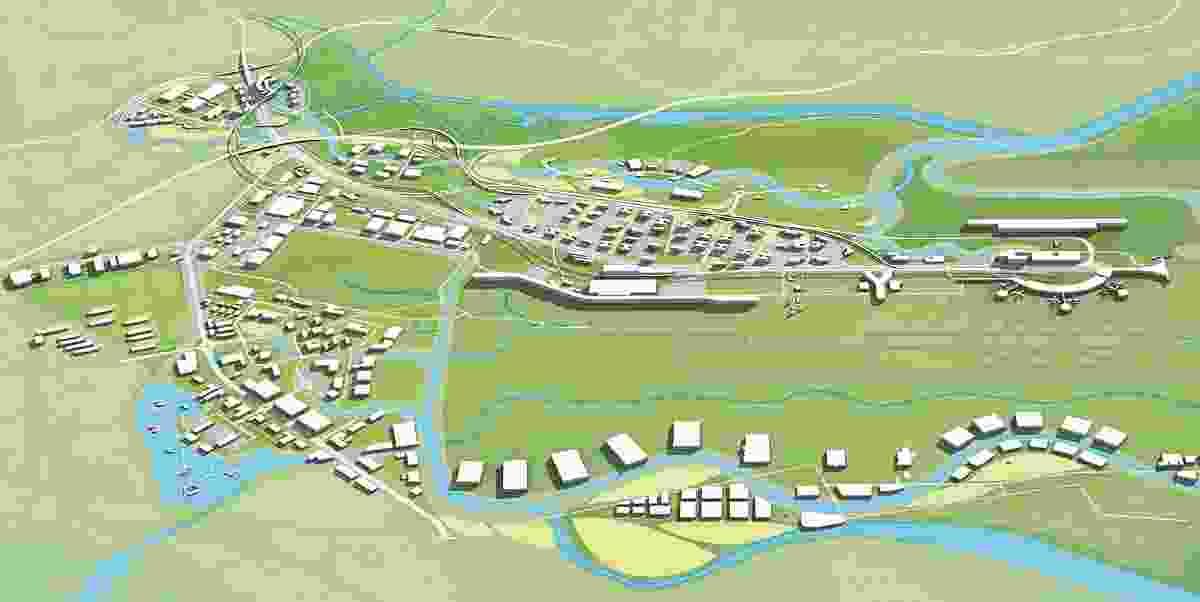