A like-minded client and a beautiful but challenging hilltop setting accompanied Daniel Lane and Nathanael Preston on their first expedition into site-specific architecture.

The design is specific to the harsh microclimate of the hilltop, weighing panoramic views against privacy for daily living.

In true Tasmanian form, Preston Lane Architects’ first commission came through word of mouth. In 2004 an old footy friend’s brother-in-law approached me to design his new home. Like Nat (Nathanael Preston) and I, the client was young, full of energy and enthusiasm, and eager to take on the challenge of a new build on the crest of a hill. The home was the perfect kick-starter for uniting us as a practice.

Nat and I had become friends while studying together at the University of Tasmania, and between us had a range of architectural experiences – me in Hobart and Nat in Melbourne. We were keen to join forces to open up an architectural dialogue that spanned the Bass Strait. A small practice with offices in two states may seem like a strange way to start a business – almost the reverse of the norm – but we knew starting a practice was not going to be easy and sensed that Hobart provided the perfect springboard to assist with launching into Melbourne. Over a few years we managed to build a large portfolio of built work – generally speaking it’s much quicker, simpler and cheaper to build in Tasmania.

Our clients for Bonnet Hill House (first published in Houses 56) were, like us, not only interested in site-specific architecture but also keen to explore spatial ideas that dealt with and celebrated the project’s prime hilltop location. Having like-minded clients allowed us to work hand in hand on the design of their home, and the result was a first home that we were all proud of. We were extremely honoured when the project received the Australian Institute of Architects Tasmanian Chapter’s Residential – New award in 2007. Looking back, the time we invested in responding to and respecting the hilltop’s harsh microclimate was extremely worthwhile and we have continued to explore it in our work since.

Like many sites in Tasmania, the main challenge at this site was establishing a sunny, sheltered outdoor area and a sun-drenched interior for the winter months, when you just want to sit with the sun on your back. In Tasmania we are lucky enough to be immersed in a beautiful landscape, with extensive views to the water and mountain ranges. As a result, the view often becomes one of the primary focuses when designing a home, and Bonnet Hill House was no exception, with the site offering 360-degree views across Hobart. The challenge then becomes how to frame differing outlooks while establishing a sense of enclosure and privacy required for everyday living.

In response to this challenge we constructed the house on a split level, designing it as two pavilions that sit side by side, organized between masonry blade walls. These pavilions are connected by a central circulation spine that houses joinery and provides informal niches for display and seating while allowing views through the spaces. The large pavilion houses the main living spaces and main bedroom, which orient to the north-east, and the smaller pavilion provides a separate space for the kids’ bedrooms and bathroom. The garage and services are located to the south-west and create the opportunity for a protected courtyard, which captures the setting sun behind Mount Wellington late in the afternoon.

The building’s configuration is expressed through the form of the roof, which on each pavilion rakes from the south to the north. The pavilions are connected by the flat roof of the central spine. The masonry blade walls are terminated well below the roof line and allow the roof to appear as a lightweight lid rising up the hill. Internally the ceiling heights vary, setting up a series of contrasting volumes that compress through the central circulation spine and open up in the living room and study. This and the carefully positioned windows frame and open specific views and provide a series of different types of spaces.

Many of the architectural ideas applied in the Bonnet Hill House are explored in our work today. We often use heavy masonry as a base to ground the building to the site and provide an inherent strength that cradles contrasting lightweight components of the build. Barrier/blade walls often set up a series of strong axis in the homes we design and establish clear extensions from indoors to outdoors. We have often discussed (although don’t tell any of our clients!) that if the home was to burn down, the dominant defining walls would remain, and the concept for the house could still be read as remnants in the landscape.

It is interesting to pause and consider how our practice of architecture has altered over the past ten years. The design process on most projects continues to be shared between offices, providing the rare opportunity to have an “outsider” review and challenge evolving concepts. I think there has been a subtle shift in the appreciation of natural, raw materials and what they can bring to a project. We find delight in seeing a building grow old and nestle into its context over time – both its material language and architectural composition.

This project was first published in Houses 101 as part of the First House series where architects revisit their first built commission.

The design is specific to the harsh microclimate of the hilltop, weighing panoramic views against privacy for daily living. 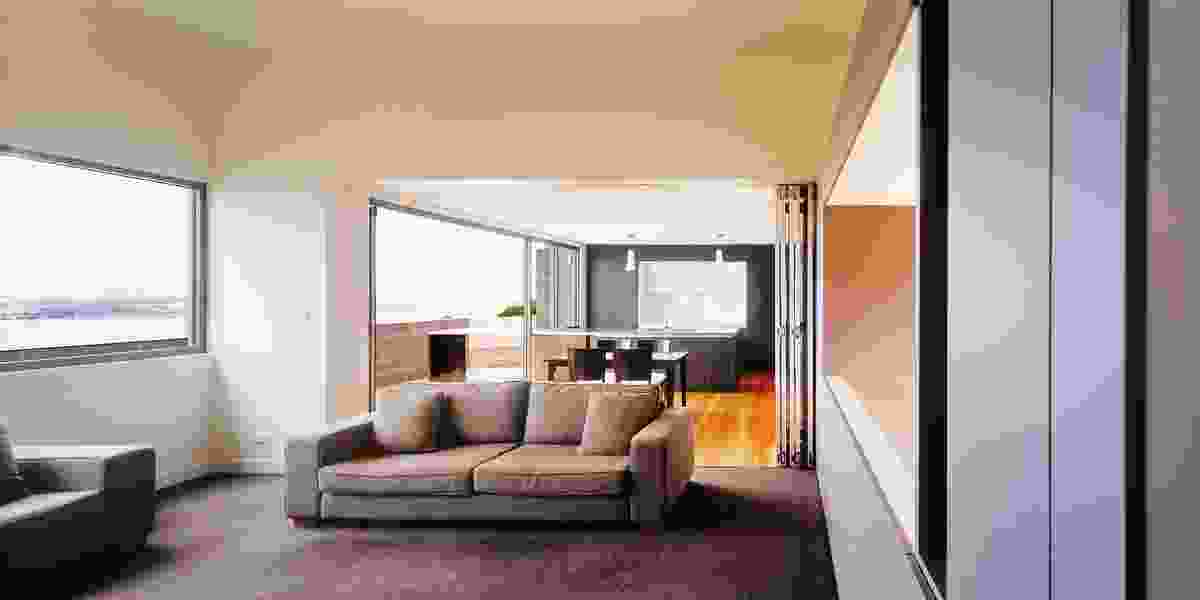 Living spaces occupy the larger of two pavilions running side by side between blade walls.

The masonry blade walls stop short of the roof, allowing it to rise lightly up the hill. 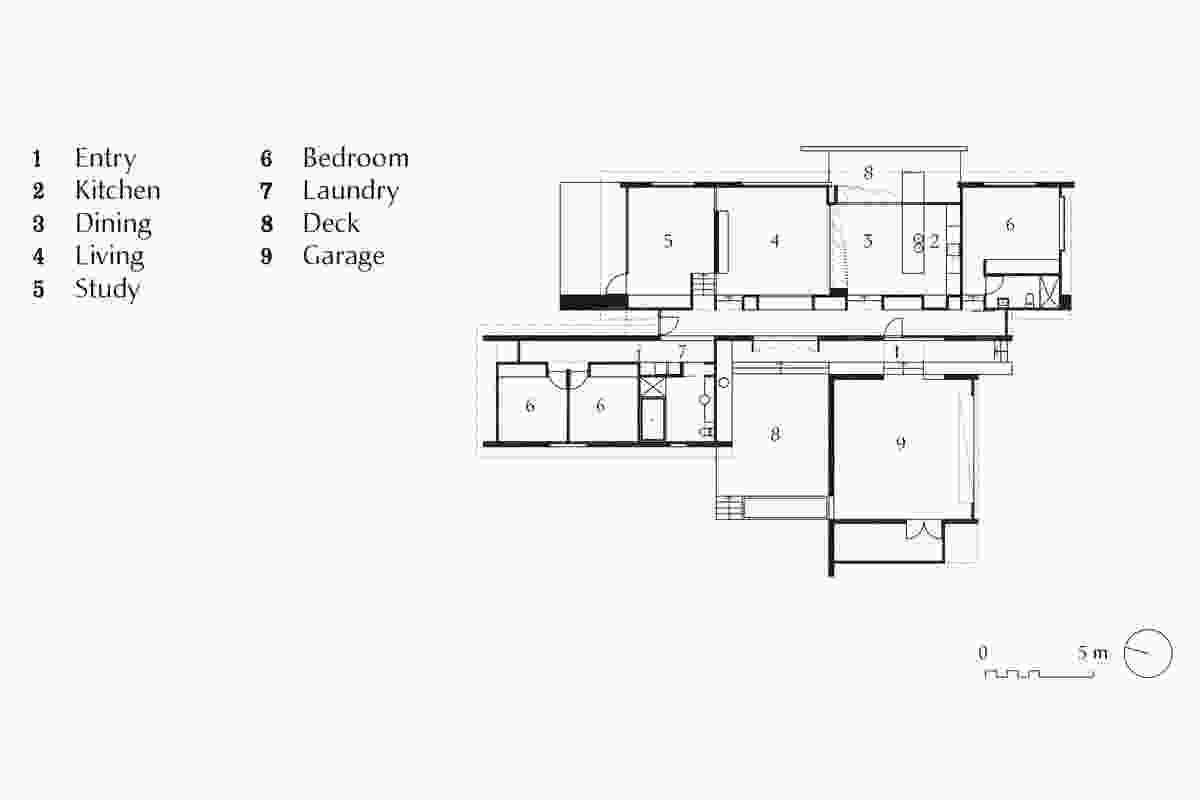