The tough exterior of this new house by Delia Teschendorff Architecture gives way to a “soft centre,” protected from the hustle and bustle of a busy West Brunswick street.

Industrial in aesthetic and sitting between a corner shop and a suburban bungalow, this new house has no setback from its West Brunswick street.

Delia Teschendorff Architecture’s Bridge House 2 is one tough character. A melange of light industrial building forms and hard-wearing, mottled red brick, it seems more defensive redoubt than domestic retreat when viewed from the street. Delia Teschendorff describes Bridge House 2 as “honest.” She might be referring to the fact that the building’s architectural expression is “true to its materials” – its structural brick skeleton is legible inside and out and its interior is dressed simply, with naturally finished timber floors and joinery. The building’s honesty, though, is more refreshing than this well-worn trope would do justice to.

Located in Melbourne’s Brunswick West, the house sits between a lurid pink corner shop to its south and a one-storey hipped-roof suburban bungalow in red brick to its north. To the east, a busy road rumbles with a steady flow of trams and traffic. When Delia originally submitted the design for planning approval, it was rejected. It’s not hard to see why. Quite apart from the house’s hard-faced exterior, on the south-eastern corner of its boundary a wedge-shaped volume of white polycarbonate and grey masonry jostles right up to the street. Delia describes this structure as a studio; separated from the main house by a covered entry deck, it reads as a kind of “front yard shed.” Its industrial appearance and lack of setback from the street seemed to be a bridge too far for the local planners, though, and it took a trip to the Victorian Civil and Administrative Tribunal to get the design approved.

It would have been a shame if Delia hadn’t managed to realize the project according to her original plans. The initial rejection of the design is symptomatic of the box-checking afflicting the development of Melbourne’s inner suburbs, where design is too often constrained by the narrow parameters of what planners believe is “appropriate” residential character. As built, the studio’s volume works to broker the transition from the adjacent shopfront to the suburban setback of the house, chamfering in plan to the little garden that sits at the front of the main building. It’s a sensitive nod to the surrounding streetscape, which, despite the local council’s apparent belief to the contrary, is a hybrid jumble of commercial and residential buildings, setbacks and scales, periods and styles. The house’s materials and massing, too, reflect this concern. Fortunately for the building’s occupant, this sensitivity isn’t limited to context, but extends to the demands of inhabitation.

The house is owned and occupied by Grace, a teacher, who commissioned the building to replace an old timber cottage on the site. The cottage had once been Grace’s family home, until her parents sold it to move into the brick bungalow next door. The family had been close to the bungalow’s previous occupant, an immigrant from England. As Grace recalls, when he passed away he left behind two very specific instructions: his pink Holden was to go to Grace’s parents and they were to get first option on purchasing the house. When the timber cottage came back on the market years later, Grace jumped at the opportunity to buy it and move back with her daughter, to be close to her parents.

In the design of the house, Delia cites the architecture of Graeme Gunn as one of her inspirations. Bridge House 2 certainly shares the robust material quality that Gunn’s buildings are known for. Step under the chain-link awning that shelters the front door and through the threshold, and it’s clear that Delia has also learned from his planning. Like many of Gunn’s houses, the tough exterior of Bridge House 2 shelters a soft centre: a lush courtyard garden. The garden forms the backdrop to the open-plan kitchen and living area on entry, and is visible from most of the rooms in the house.

Once inside, it’s apparent that the utilitarian building forms are more than just a play on the neighbourhood’s urban fabric. The roof profile is vaguely reminiscent of industrial sawtooth roofs, but on this tightly bounded site, it allows for highlight windows oriented north that fill the interior with natural light. The studio at the front of the property also helps dampen the sound of the trams rumbling past. The narrow, slightly elevated corridor that spans the courtyard to its north and a pocket garden to the south (lending the building its “bridge” moniker) also helps to acoustically isolate the bedrooms from street noise. Combined with the light and the warm tones of the naturally finished timber in the living area, this gives the impression of a comfortingly cloistered idyll. As Grace tells it, her neighbourhood friends think of it as a beach house.

More so than in many of Melbourne’s inner-suburban areas, the built fabric of Brunswick can seem ad hoc. As provisional as this landscape might seem at first, it is actually defined by decades of occupation. Its simple houses, typically brick but often timber, are reefed in by sheds and trellises, the infrastructure of productive gardens host to mature fruit trees, self-built concrete terraces and outdoor furniture that but for the rust would be back in fashion. In Bridge House 2, Delia has considered this tumult with a frank gaze. Unflinching, she’s found a kind of beauty – not a fantasy of heterogeneous, prim and proper Victorian suburbia, but a building of genuine character, designed above all to be lived in. 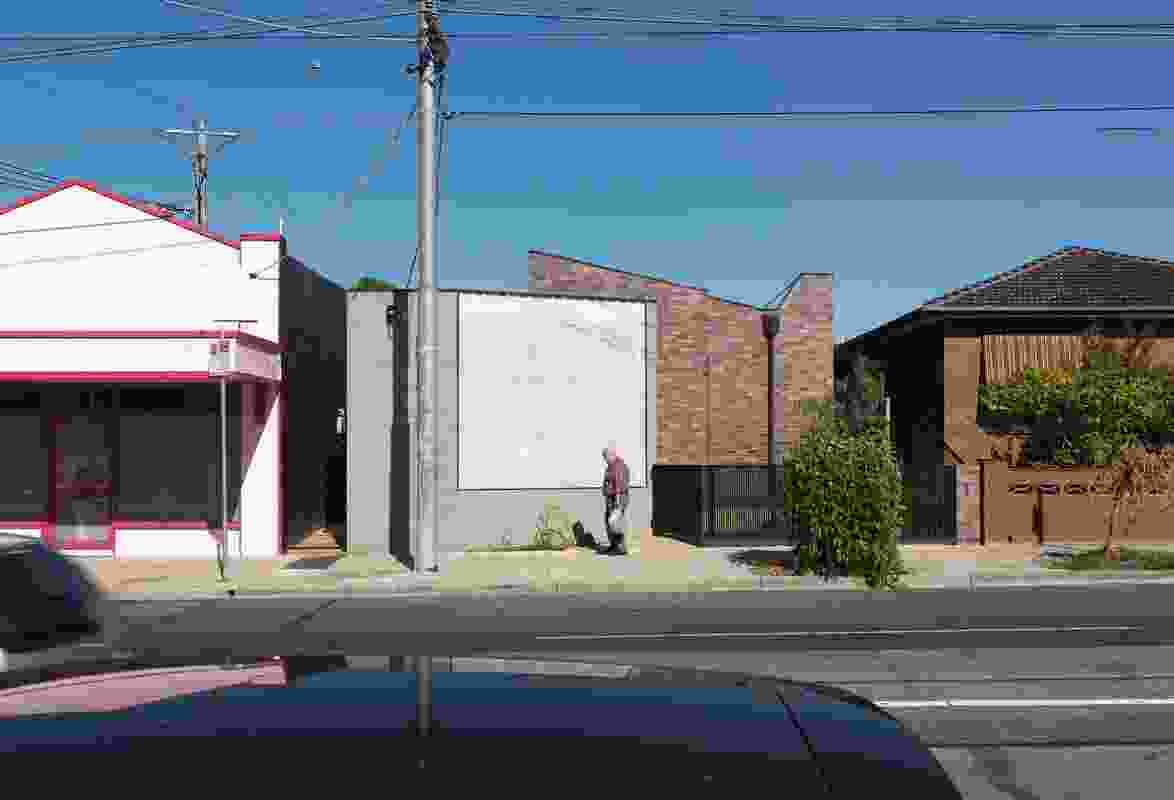 Industrial in aesthetic and sitting between a corner shop and a suburban bungalow, this new house has no setback from its West Brunswick street. 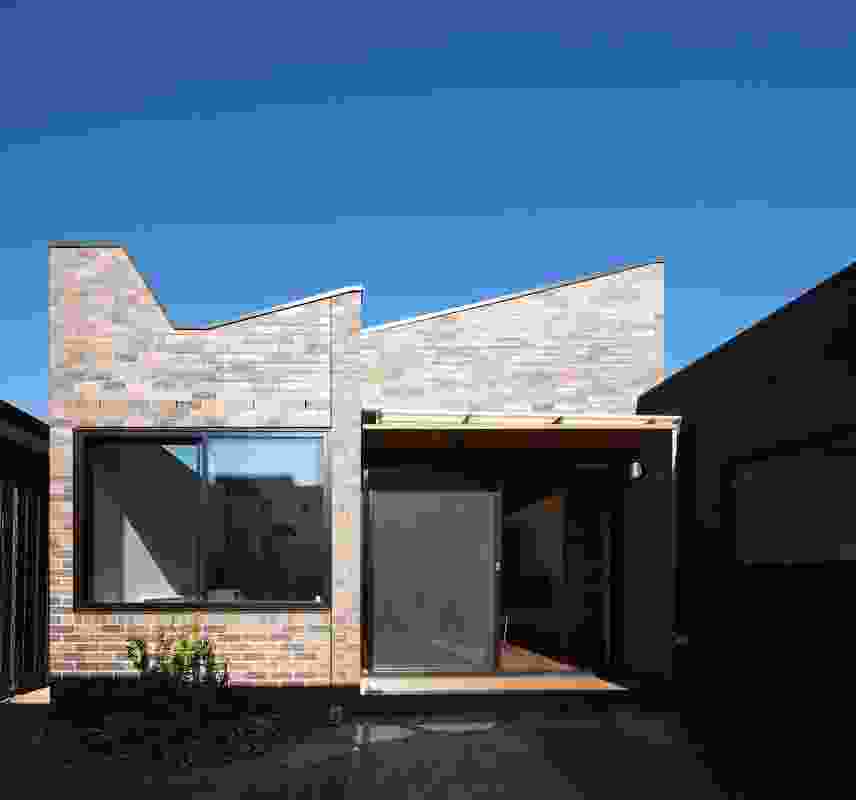 A northern courtyard separates the sleeping areas from the living spaces and a “bridge” connects the two pavilions. 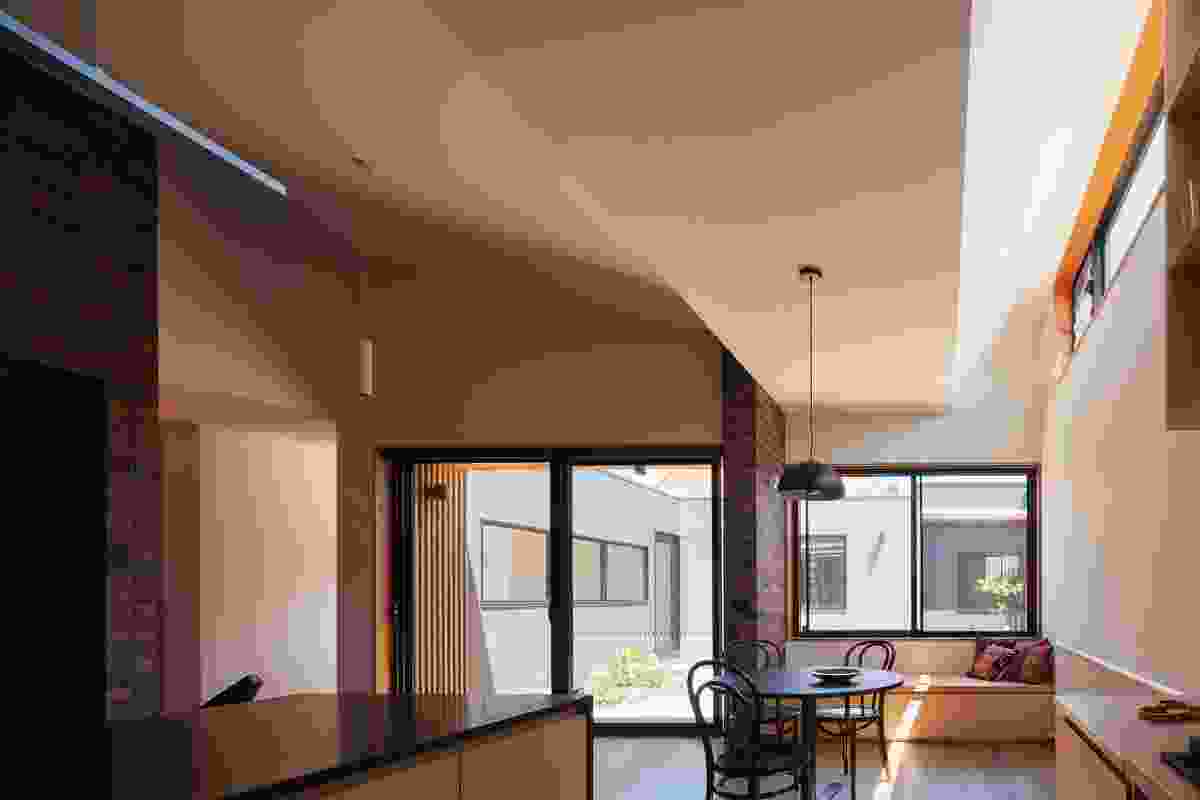 The roof profile allows for highlight windows oriented north that fill the interior with natural light. 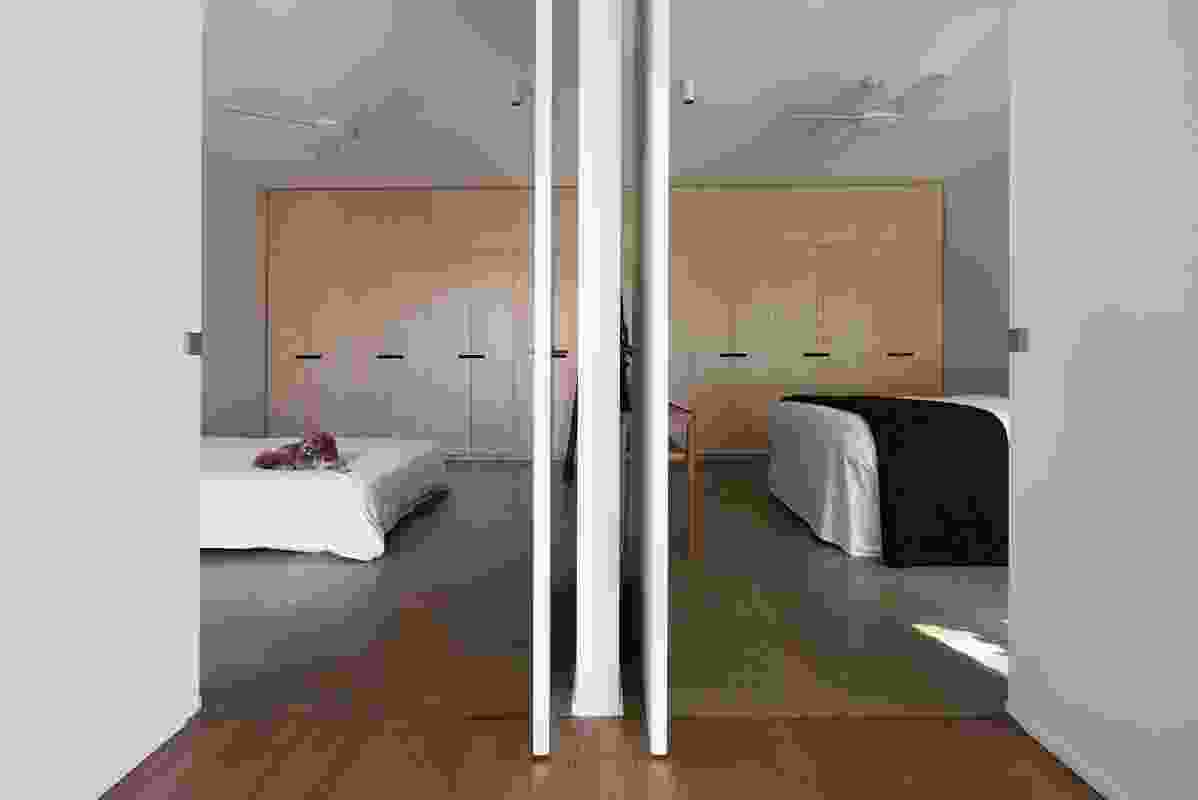 The house has a robust material quality and an honest expression of structure.

A skylight runs the length of the narrow ensuite, giving an impression of vertical space.